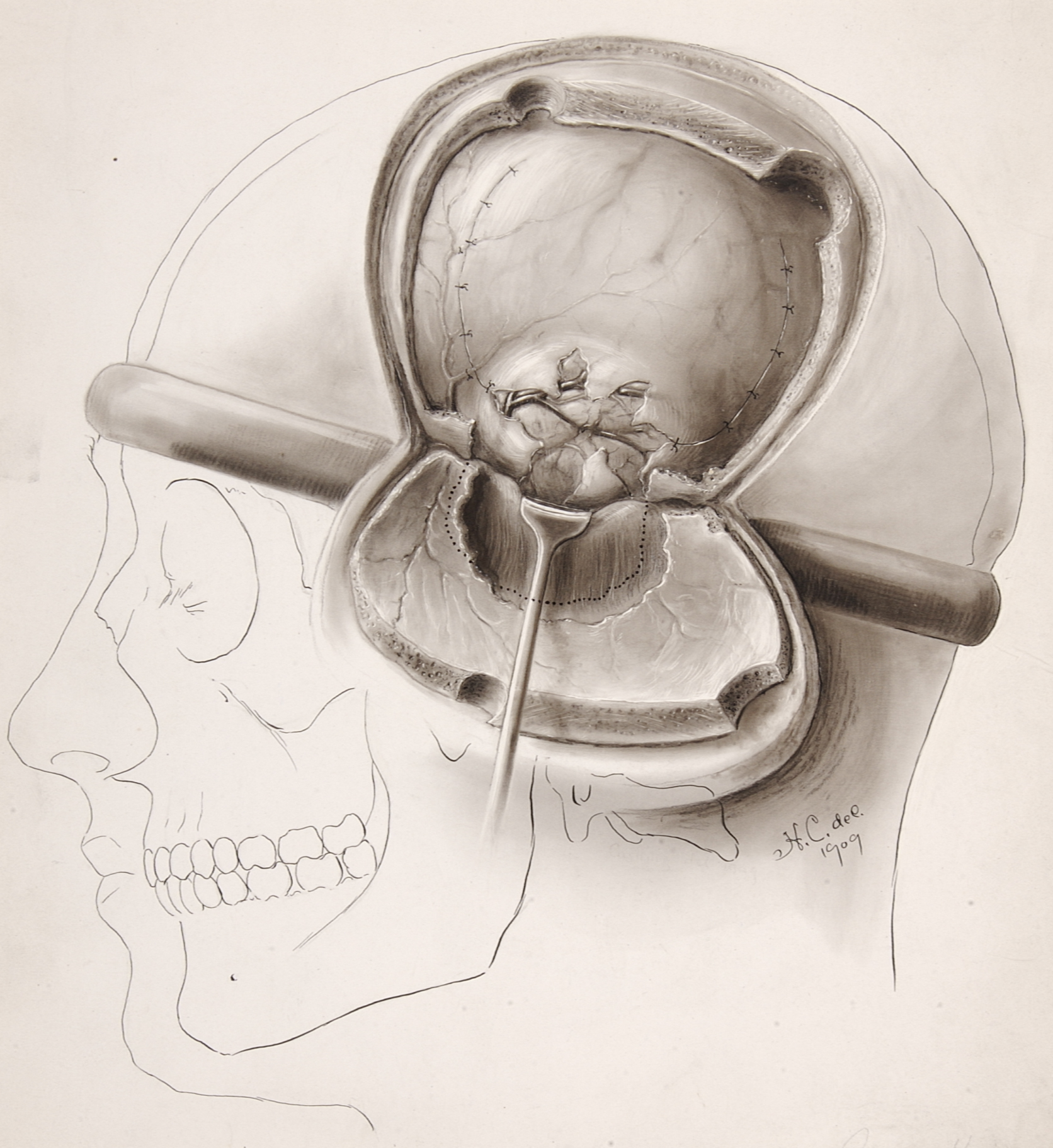 Figure 1: Harvey Cushing illustrated the technique of dural closure for a subtemporal decompression in 1909. At that time, intradural surgery was considered risky and reliable tumor localization was not consistently possible. Subtemporal decompression was used to alleviate intracranial tension until more localizing signs developed. Note the use of a scalp tourniquet as a rudimentary method of hemostasis (Illustration courtesy of the Cushing Brain Tumor Registry at Yale University).

The most important principles to consider during the dural opening are:

The second principle listed above is pertinent for operative planning and can significantly simplify the closing steps of surgery.

I open the dura in a curvilinear fashion if possible because closure of this type of an opening is most straightforward. If a watertight dural closure is not mandatory, cruciate dural incisions are used for convexity craniotomies. 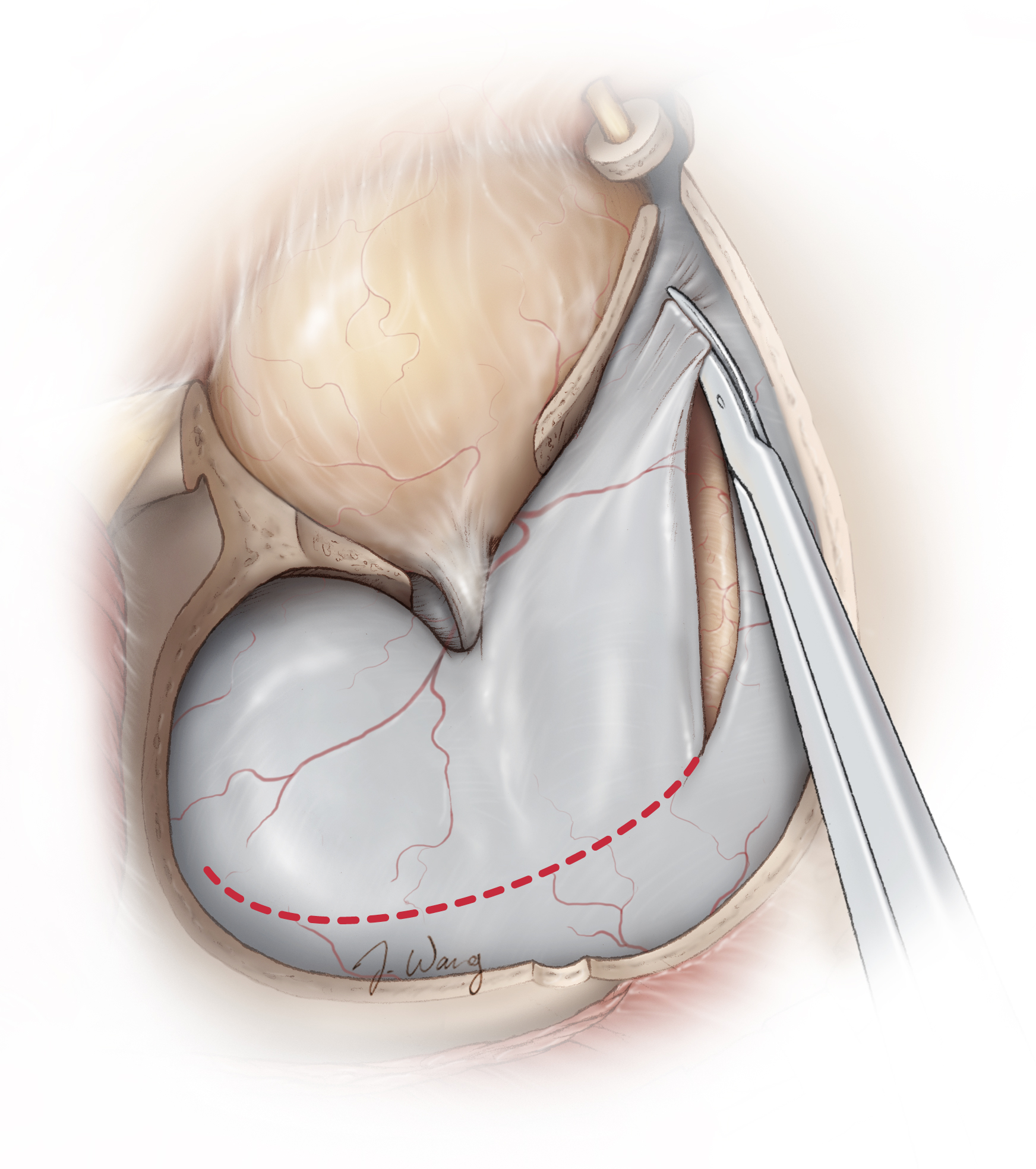 Figure 2: A curvilinear dural opening following an orbitozygomatic craniotomy is demonstrated. The surgeon must exercise caution to avoid injuring the underlying cortex, especially if the brain is “tight.” Repeat operations require special precautions (using microsurgical techniques) to dissect adherent cortical vessels from the inner surface of the dura. I perform limited dural openings specifically tailored to the underlying pathology during repeat operations to avoid/minimize dissecting the adherent pia, and associated veins and arteries. For example, during a repeat pterional operation, I do not open the previous curvilinear dural incision but rather incise the dura along the base of frontal lobe to reach a subfrontal trajectory. This maneuver will prevent dissection/reflection of the adherent dura over the lateral frontal lobe. 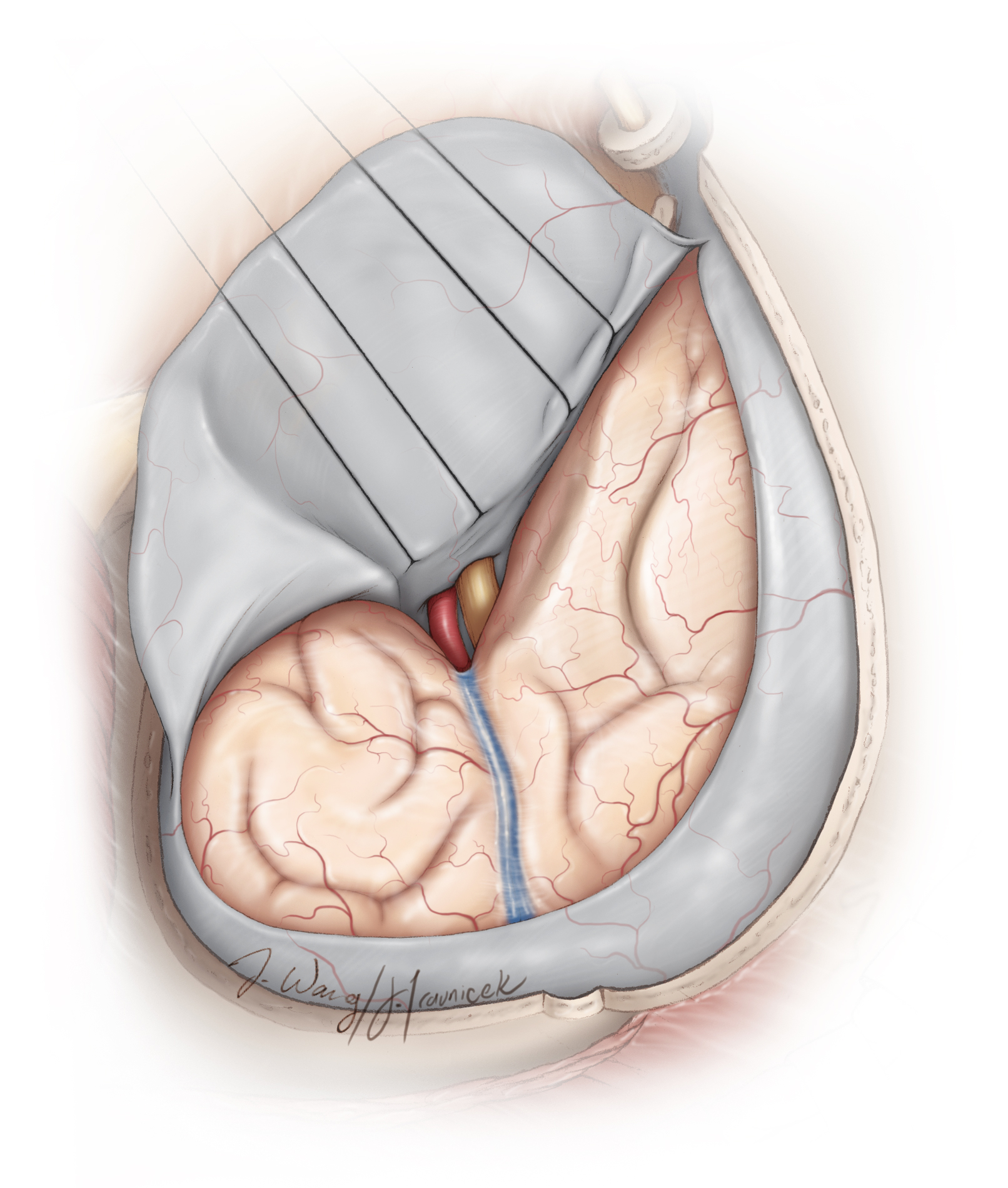 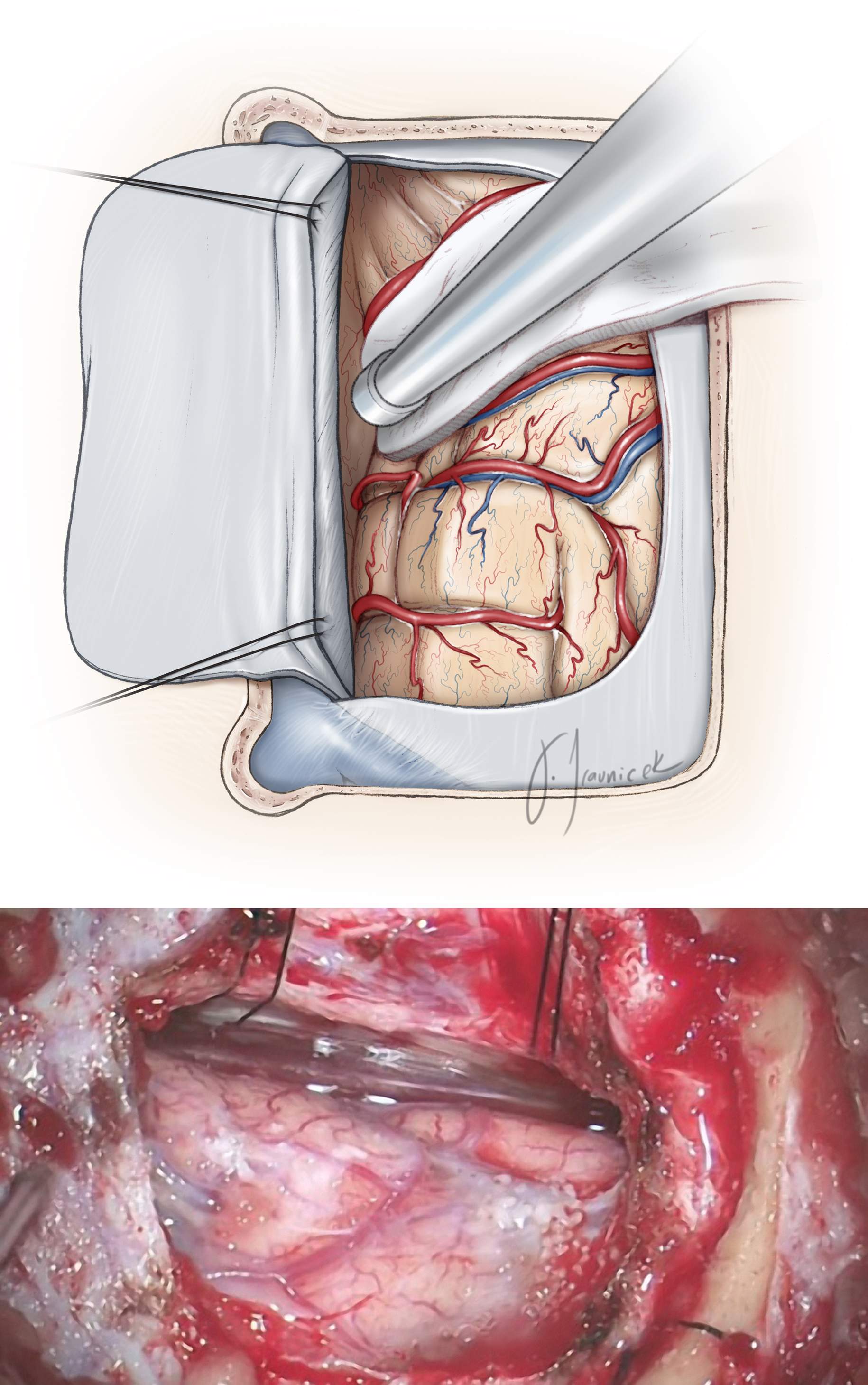 Figure 4: For parasagittal craniotomies, the dura is opened in a U-shaped flap based on the sagittal sinus (top image: supine position). Retraction sutures in the superior falx rotate the venous sinus laterally and expand the interhemispheric reach. Note that gravity retraction facilitates mobilization of the dependent hemisphere away from the midline (bottom image: lateral position).

The above principles also apply to the posterior fossa surgery. However, unlike supratentorial surgery, a watertight dural closure is highly recommended for posterior fossa operations for resection of tumorous and vascular lesions. Along with the effect of gravity, these procedures are potentially associated with high CSF pressures postoperatively that can lead to CSF fistulae.

There is a significant risk of postoperative CSF leakage after infratentorial surgery, so during the dural opening, the operator must carefully consider the need for a watertight dural closure at the end of the operation. 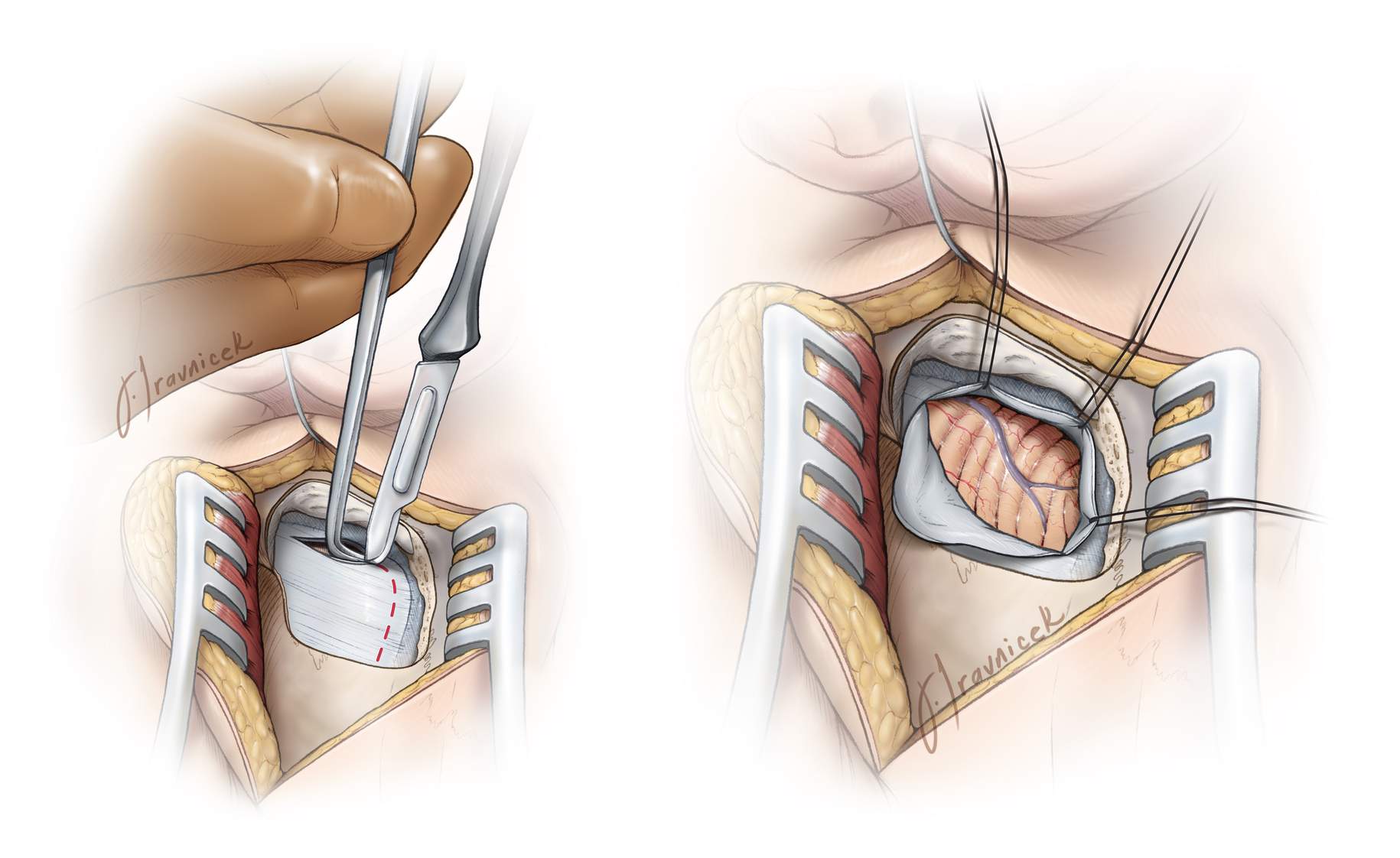 Figure 5: Unlike supratentorial parasagittal craniotomies where the presence of the parasagittal veins precludes the option of incising the dura along and parallel to the superior sagittal sinus, I open the dura along the transverse and sigmoid sinuses for a retromastoid craniotomy. This maneuver leaves most of the dura over the cerebellum, keeps it hydrated, and protects it from the intense light of the microscope. These reasons avoid retraction of the dural flaps. The dural incision is made a few millimeters away from the edge of the venous sinuses (left image). Retraction sutures along the sigmoid sinus dura gently mobilize and rotate this sinus laterally in order to expand the lateral aspect of the operative corridor toward the cerebellopontine angle (right image).

Figure 6: The dural opening for a midline (left image) and lateral (paramedian)(right image, showing a left-sided approach) supracerebllar craniotomies are illustrated. Two retraction sutures are placed along the posterior tentorium to mobilize the transverse sinuses superiorly and expand the supracerebellar operative angles. The dura often retracts in these cases, and a piece of pericranium is necessary for effective dural closure.

There is often much controversy regarding the need for a “watertight” dural closure and the methodologies needed to achieve this. There are numerous dural substitutes (allografts) available with their corresponding claimed strengths and weaknesses. One may ask: When do we really need a watertight dural closure? And when can we get away with simply approximating the edges of the dura? The time spent to achieve an unnecessary watertight dural closure can contribute to operative inefficiency.

Running sutures are often best for procuring a watertight closure. I have achieved reasonable outcomes by following this algorithm for closing the dural incisions:

Management of the air sinuses is paramount for avoiding CSF leakage. The mastoid air cells are thoroughly waxed, and the frontal air sinuses are exenterated. The details of the techniques involved are discussed in the Retromastoid and Bifrontal Craniotomy chapters.

I avoid dural substitutes because these allografts are associated with risks of aseptic and septic inflammation. Pericranium should be harvested at the beginning of the operation to augment the dural closure. Alternatively, a piece of muscle may be sewn in to plug a hole or small defect in the closure. Fat globules are quite effective for preventing CSF leakage when a watertight dural closure is impossible following skull base approaches. The details of this technique are discussed in the Anterior Petrosectomy chapter.

The closure techniques for transsphenoidal procedures are discussed in their corresponding chapters, including the Endoscopic Expanded Transnasal Approach chapter.

Other Considerations for Closure 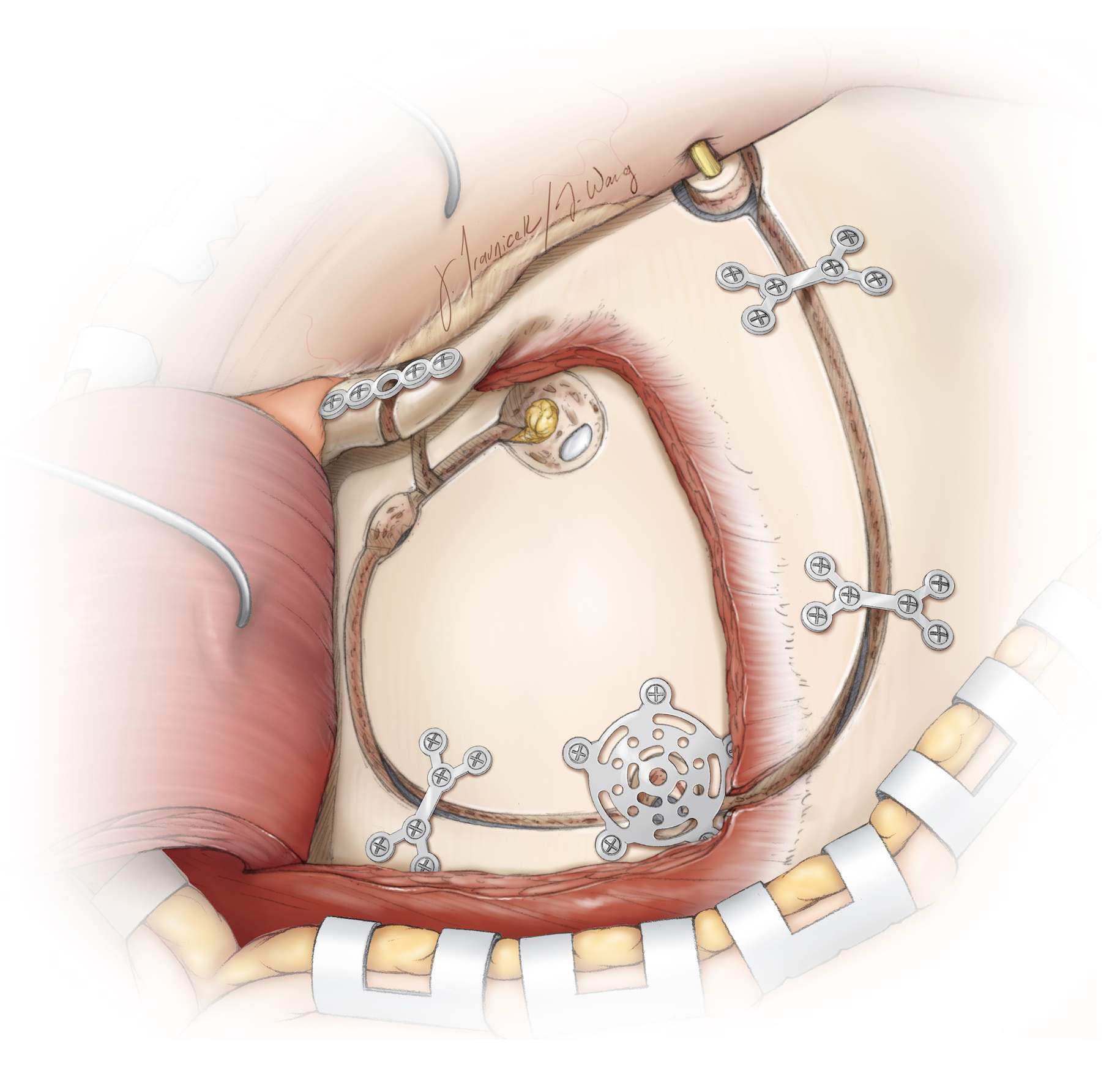 Figure 7: Plates and screws are used for bone flap fixation. In this case, the flap after an orbitozygomatic osteotomy is being replaced. Three-point plate fixation is usually adequate for a simple pterional craniotomy. The key hole may be filled with cranioplasty materials for cosmesis. The screws should not violate the cortical bone over the air sinuses. 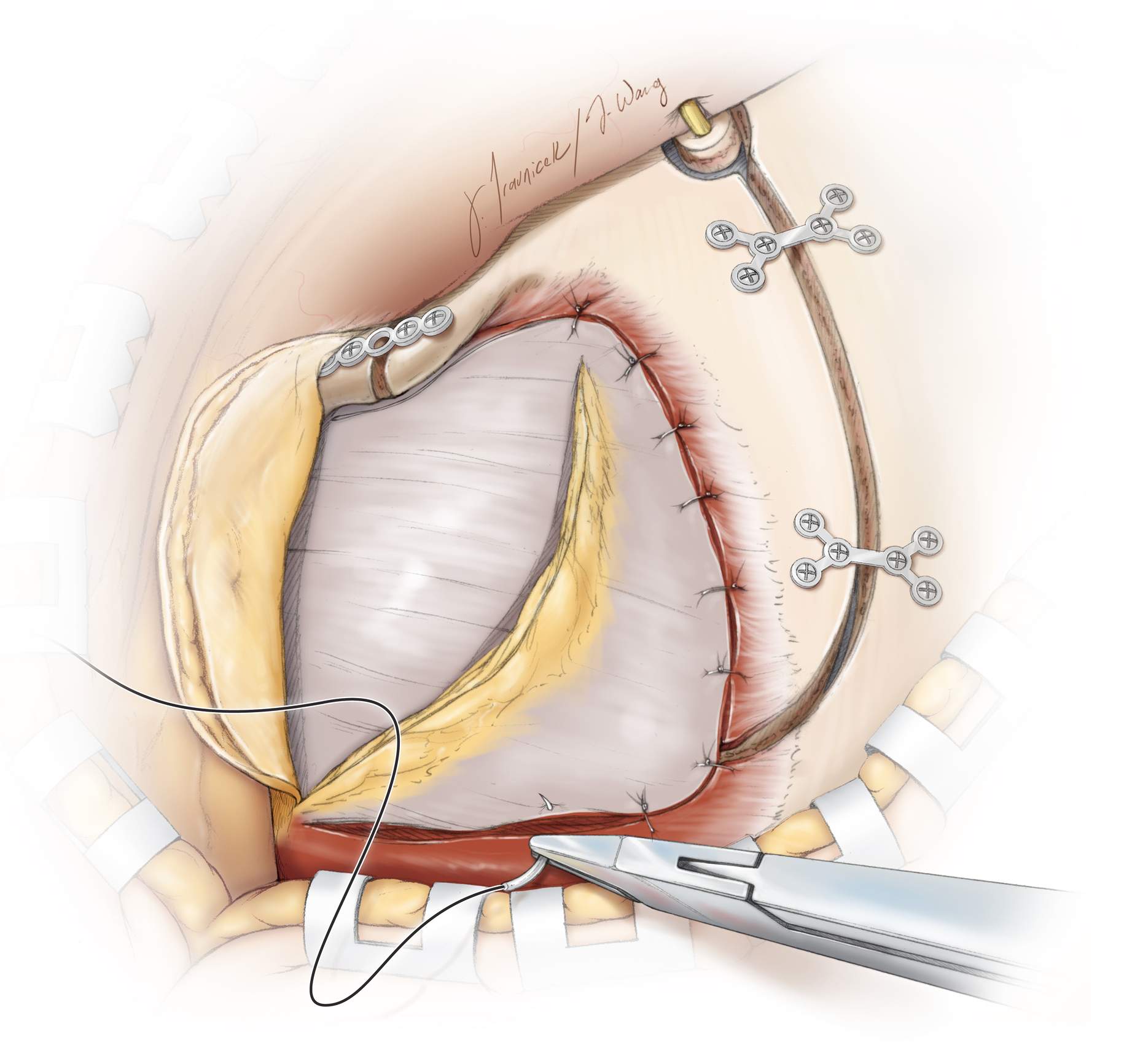 Figure 8: The temporalis fascia is approximated using absorbable sutures. Inclusion of the muscle into the suture line and its strangulation leads to muscle necrosis and postoperative discomfort. The fat pad is reflected in position, not sutured in place. 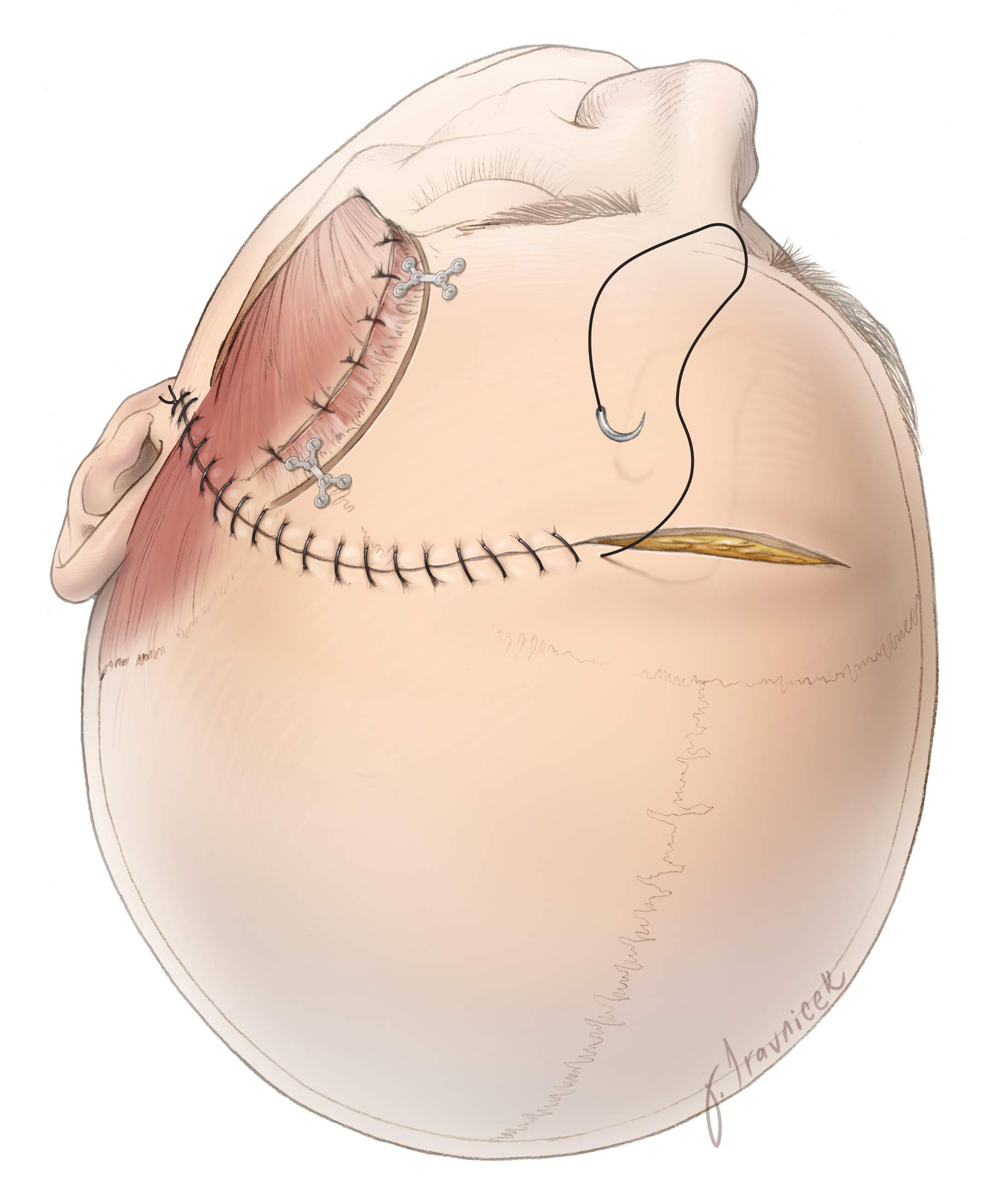 Figure 9: The edges of the scalp are coagulated, but the electrocautery is minimized to avoid necrosis and compromised wound healing. This is especially important during a repeat operation. The galea and the skin are closed using 3-0 absorbable and 3-0 Monocryl sutures, respectively.

For additional illustrations of an encephalocele, please refer to the Jackler Atlas by clicking on the image below: 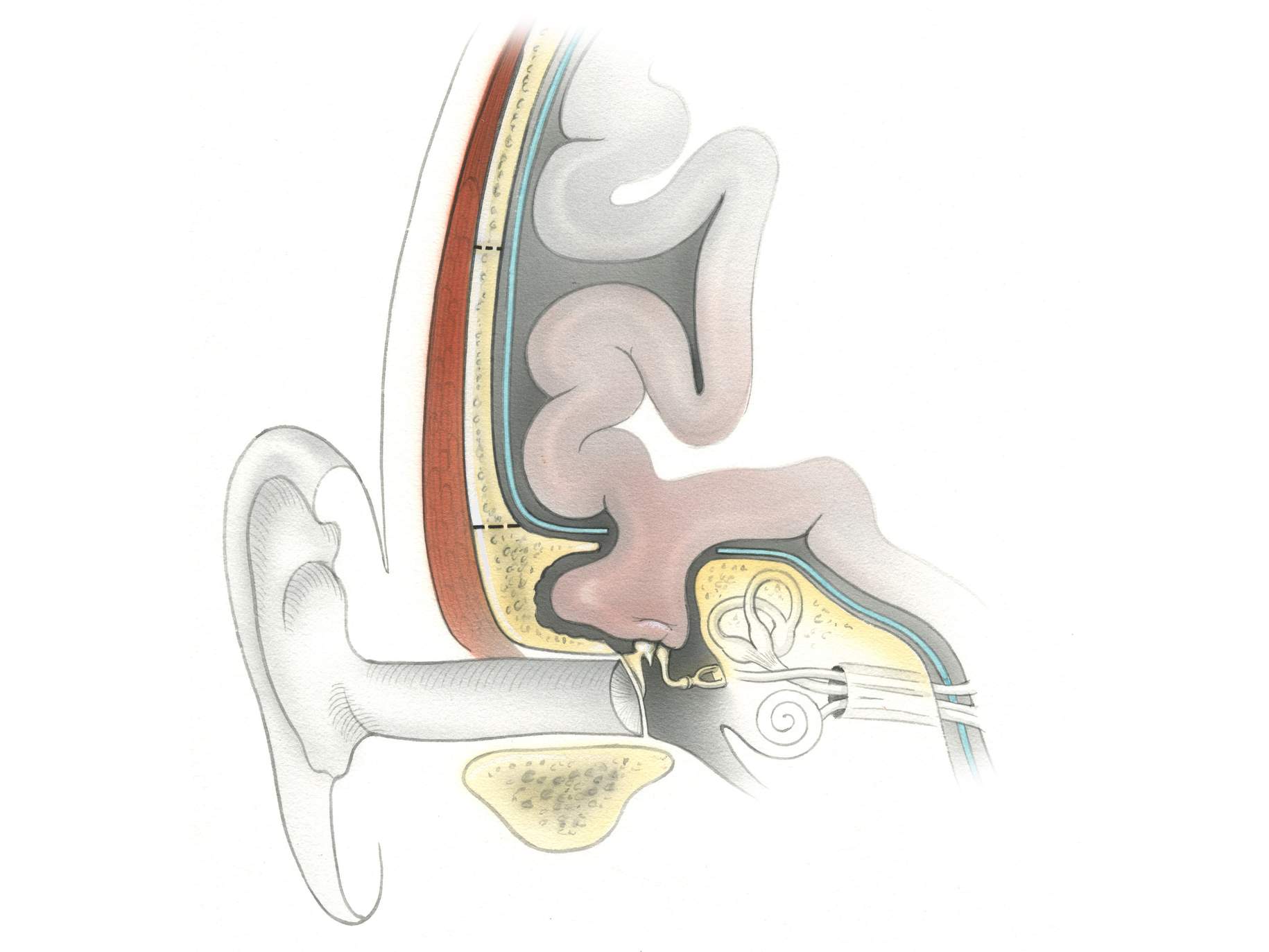