The peritoneum is the preferred distal terminus of cerebrospinal fluid (CSF) shunts. However, other anatomic locations can be considered when the peritoneum is not appropriate, such as in patients with infection or enough adhesions to prevent effective CSF absorption. Other potential distal sites include the pleural space, gallbladder, and cardiac atrium.

A number of potential drawbacks to using a ventriculoatrial (VA) shunt exist. (1) A limited amount of catheter can be placed in the atrium, and growing children often need future revisions to lengthen the catheter. (2) Nephritis is a rare but particular complication that can result from a VA shunt. (3) A shunt might be exposed to infection if the patient develops bacteremia. (4) Use of a shunt can worsen certain cardiac or pulmonary conditions and can exacerbate pulmonary hypertension. (5) The distal catheter can lead to thromboembolic complications.

Given these limitations, VA shunts are generally considered a second-line option if the peritoneum is unsuitable. However, the overall rates of failure and infection for shunts placed in the atrium are similar to the rates for those placed in the peritoneum.

Surgical planning begins with an evaluation of the patient’s ventricular anatomy and condition. The presence of an existing central venous catheter should be noted. The presence of a central line is not a contraindication to VA shunt placement; however, a concurrent line can limit the surgeon’s choices for venous access. I recommend evaluating the patency of the venous system by using a preoperative Doppler ultrasound study.

Patients who have had a previous central line might have venous stenosis or occlusion. Venous abnormalities are particularly common in patients with hydrocephalus caused by intraventricular hemorrhage of prematurity and in those who have needed extracorporeal membrane oxygenation.

Placement of the proximal catheter is planned. The patient’s ventricular anatomy might favor a specific laterality or orientation. A right-sided catheter is preferred if no anatomic constraints exist. The venous anatomy on the right side is often easier to navigate than that on the left.

The patient’s clinical condition can also dictate proximal catheter positioning. I prefer parieto-occipital shunt placement in adults and ambulatory children. However, a frontal shunt is preferred for patients who will remain recumbent for extended periods of time. Lying on a shunt valve for a prolonged time can cause wound dehiscence or skin breakdown, especially in infants. Forcing a premature infant’s head to the opposite side can lead to significant head shape abnormalities and torticollis.

A 1-way valve should be chosen when placing a CSF shunt. In smaller pediatric patients, the physical size of the valve should be considered also. Larger valves or those designed for adults might extend into the child’s neck and hinder distal catheter placement. Using a valve with a relatively stiff distal connection piece in infants can tent or erode the skin with neck movement.

Venous pressure should be considered. The distal pressure of the atrium is assumed to be zero. However, this assumption might not be accurate for a patient with pulmonary hypertension or a cardiac abnormality. Any condition that causes significant elevation in central venous pressure can hinder the function of a shunt. The additional volume of CSF directly into the atrium can exacerbate existing pulmonary hypertension. It is possible also that laminar flow through the atrium will impart a negative pressure through “wicking.” Therefore, a valve with an antisiphon feature can be considered to prevent overshunting. Surgeons should be familiar with multiple valve types and be able to customize the optimal valve for any particular patient.

Centers that treat a high volume of patients with hydrocephalus should establish protocols for reducing the risk of shunt infection (refer to the protocol endorsed by the Hydrocephalus Research Network).

The patient should be positioned supine on the operating table. I prefer fluoroscopy to aid in placement of the distal catheter. Therefore, the patient must be positioned in such a way to facilitate use of the C-arm. 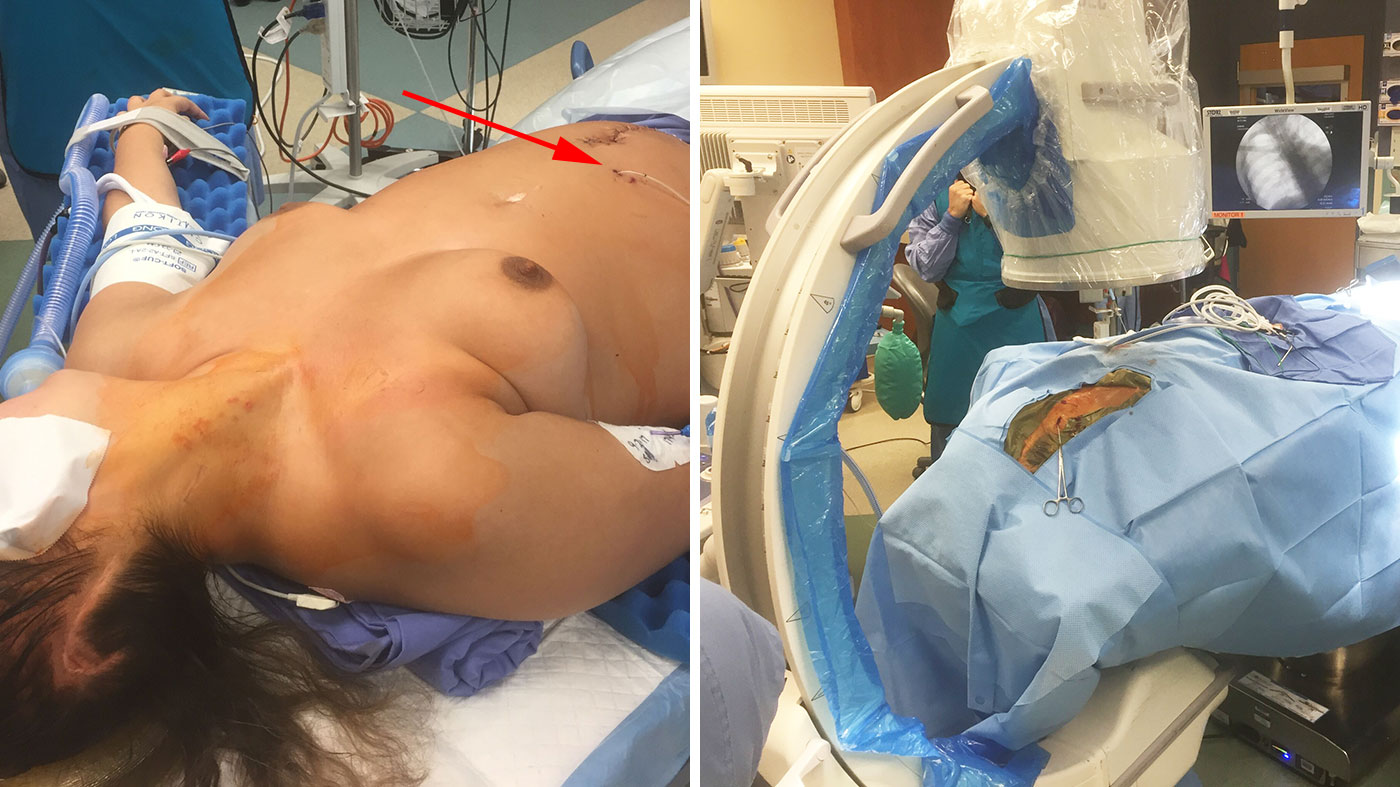 Figure 1: (Left) An adult with spinal dysraphism suffered a bladder rupture and resultant peritonitis. The patient had a long-standing parieto-occipital ventriculoperitoneal (VP) shunt that was externalized in the upper abdomen (arrow). The patient is positioned for conversion to a VA shunt, with the shoulders allowed to fall laterally to facilitate access to the subclavian vein. The mastoid process is aligned with the clavicle to facilitate access to the internal jugular vein (IJV). (Right) Table and setup for enabling use of the C-arm.

A chest roll is placed between the patient’s shoulder blades in a fashion that allows the shoulders to fall laterally. The neck is extended slightly to place the mastoid process in the same plane as that of the clavicle, which facilitates passing of the distal catheter. The patient’s head is rotated, depending on whether a frontal or parietal approach is planned. The prepped area should include possible entry points for the ipsilateral IJV and the subclavian vein. In patients with abnormal vascular anatomy, careful positioning allows preparation of the entry point of both the ipsilateral and contralateral subclavian veins. The prepped area should include all parts of any existing shunts. 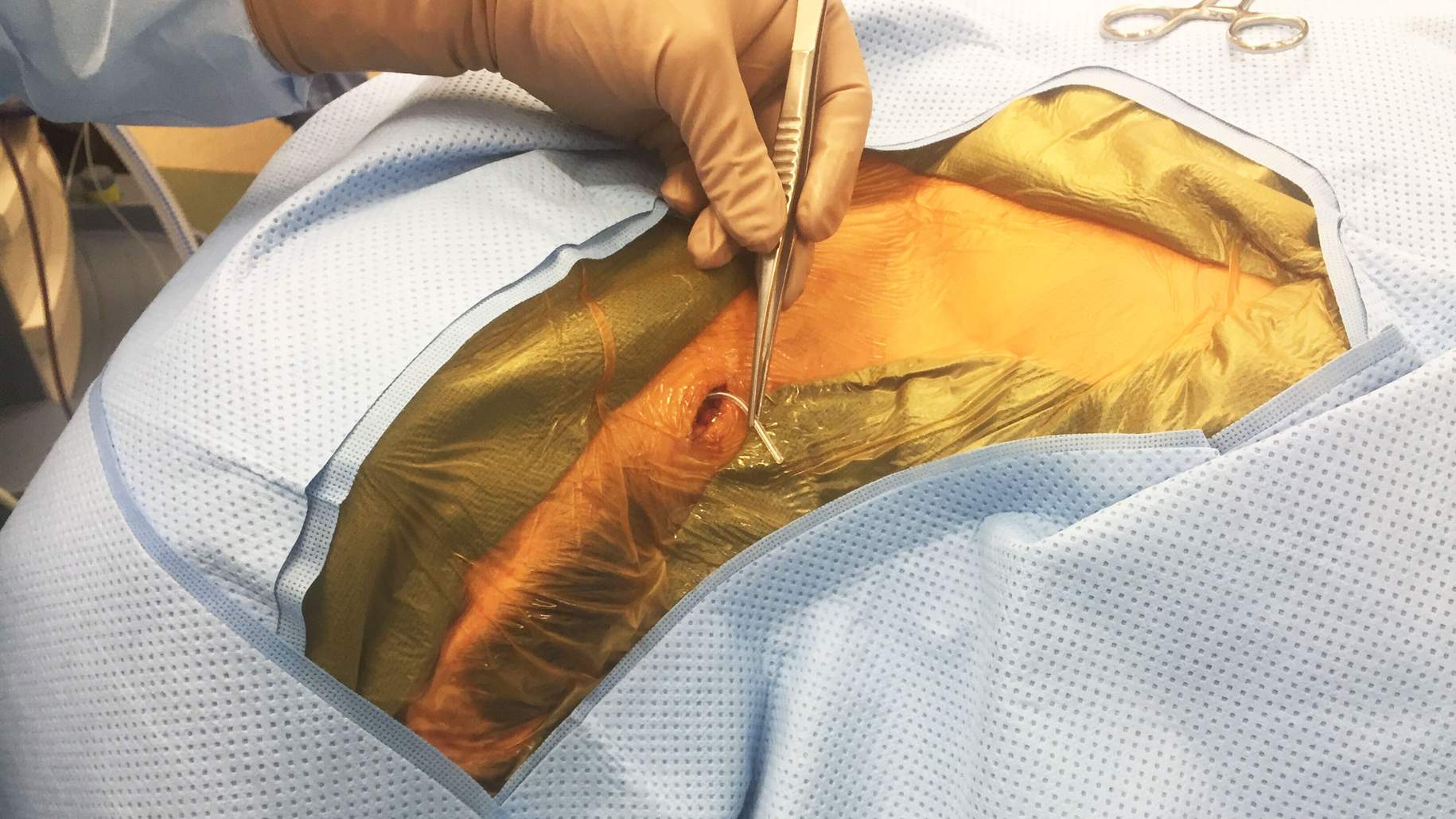 Figure 2: The distal catheter of the old shunt was exposed just below the connection with its valve (see Fig 1). This nonfunctioning VP shunt is being converted to a VA shunt.

A metallic clamp or head holder can interfere with imaging; thus, I use a radiolucent soft doughnut headrest on a standard operating table. For an adult, the table might need to be reversed to allow access for the C-arm.

Intracranial catheter placement is performed in the same manner as that for the placement of a VP shunt. This technique is described in more detail in the VP shunt chapter.

Venous access can be obtained via either an open “cut-down” or a percutaneous approach. I recommend having a vascular or general surgeon assist with gaining venous access, especially in infants.

A percutaneous modified Seldinger technique is the most common technique used to access the venous system. Either the IJV or the subclavian vein is accessed. The anatomic landmarks and technique for subclavian access are the same as those of a central venous line. On the right side, the IJV is preferred, because this vein provides a relatively straight trajectory to the atrium. 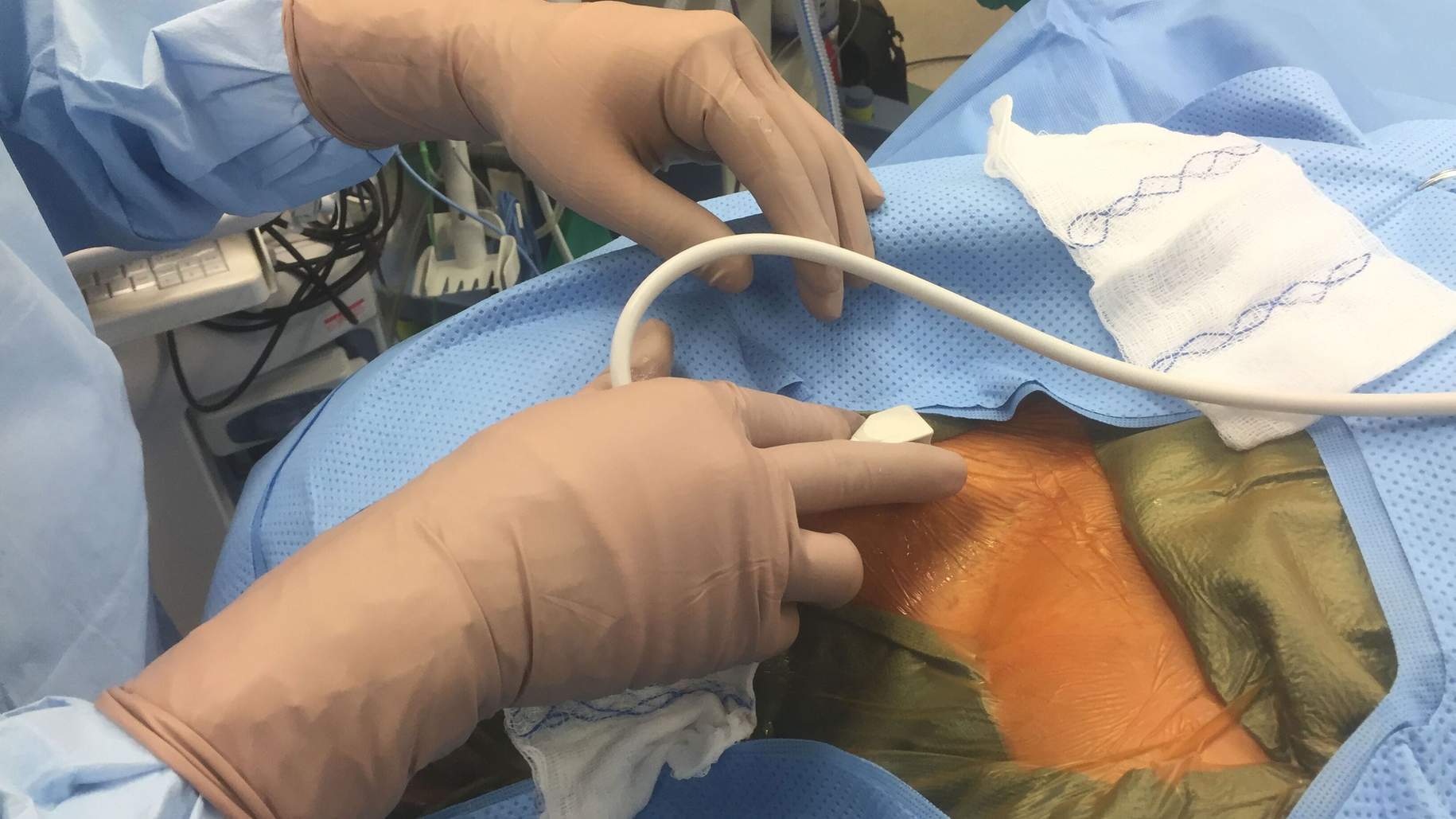 Figure 3: The IJV is cannulated with the help of ultrasound guidance. The surgeon should be familiar with the orientation of each ultrasound handpiece. The IJV can generally be found by starting around the most inferior one-third of the sternocleidomastoid muscle. Another option is to start 2 to 3 fingerbreadths above the clavicle and move superiorly. 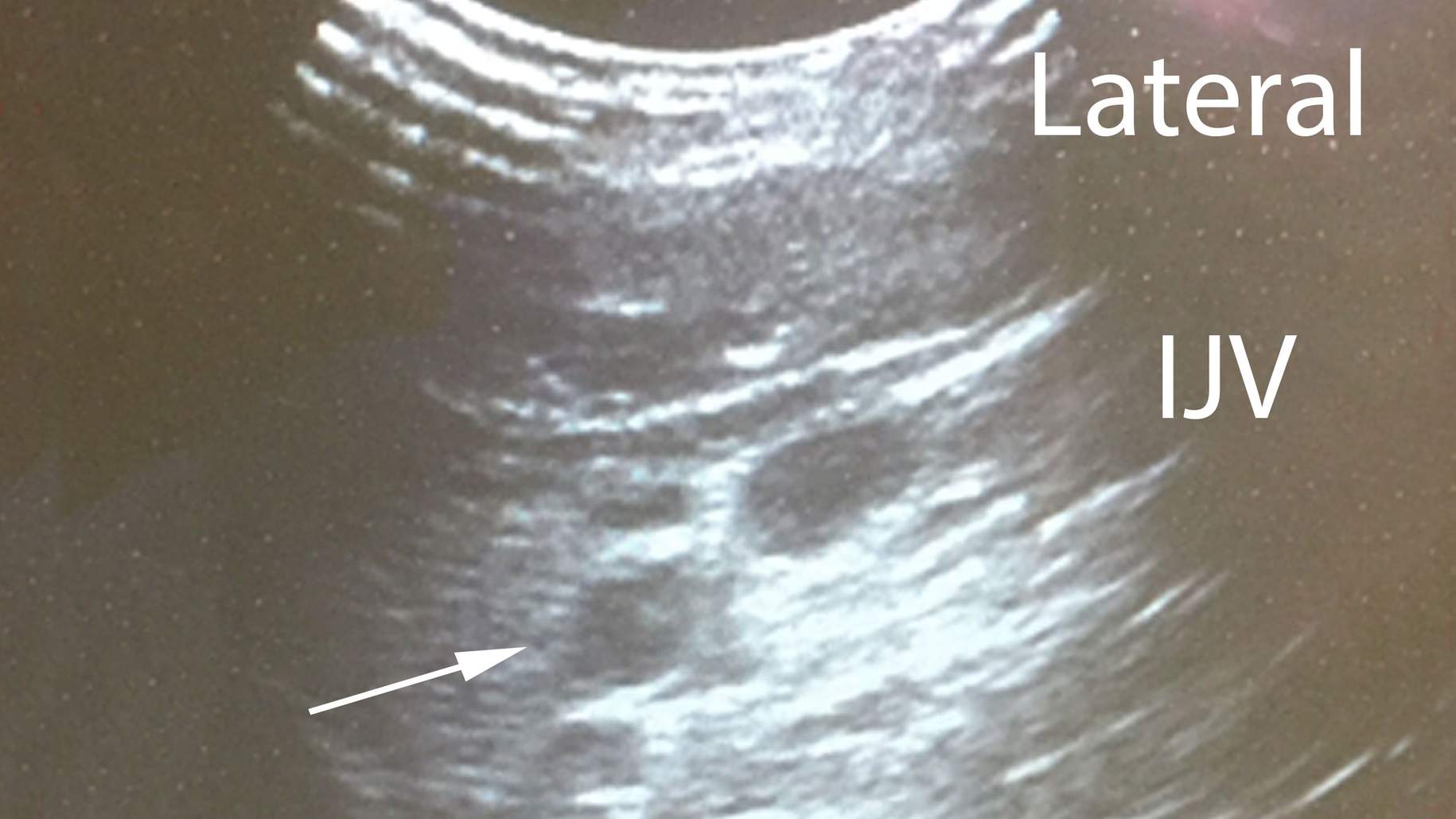 Figure 4: The IJV (arrow) is distinguished from the common carotid artery in that it generally appears lateral or anterior to the artery, is compressible, and dilates with a Valsalva maneuver. Extending the patient’s neck and placing him or her in a head-down position often helps dilate and define the IJV. 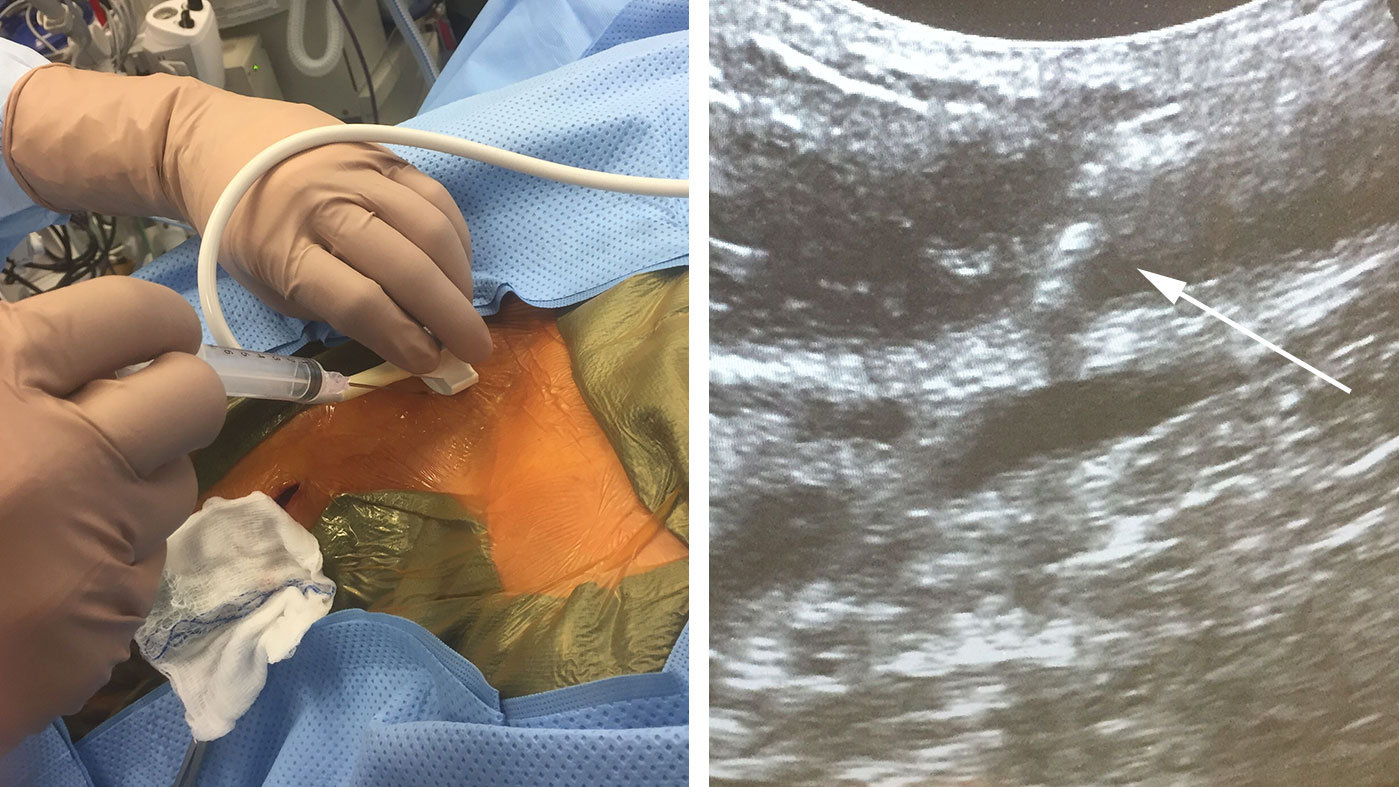 Figure 5: (Left) For IJV access, a needle is inserted at an approximately 45° angle. (Right) Needle insertion is accomplished with the aid of ultrasound visualization. Here, the tip of the arrow points to the shadow of the needle.

After penetrating the vessel, venous blood is confirmed with gentle aspiration of a syringe. The venous blood should draw easily and have a characteristic darker color than arterial blood. A soft-tipped J-wire, found in a standard central venous catheter kit, is passed through the needle into the vessel. It should pass easily without resistance. Then, the needle is removed, and the wire is advanced to the atrium, generally with the use of live fluoroscopic guidance. 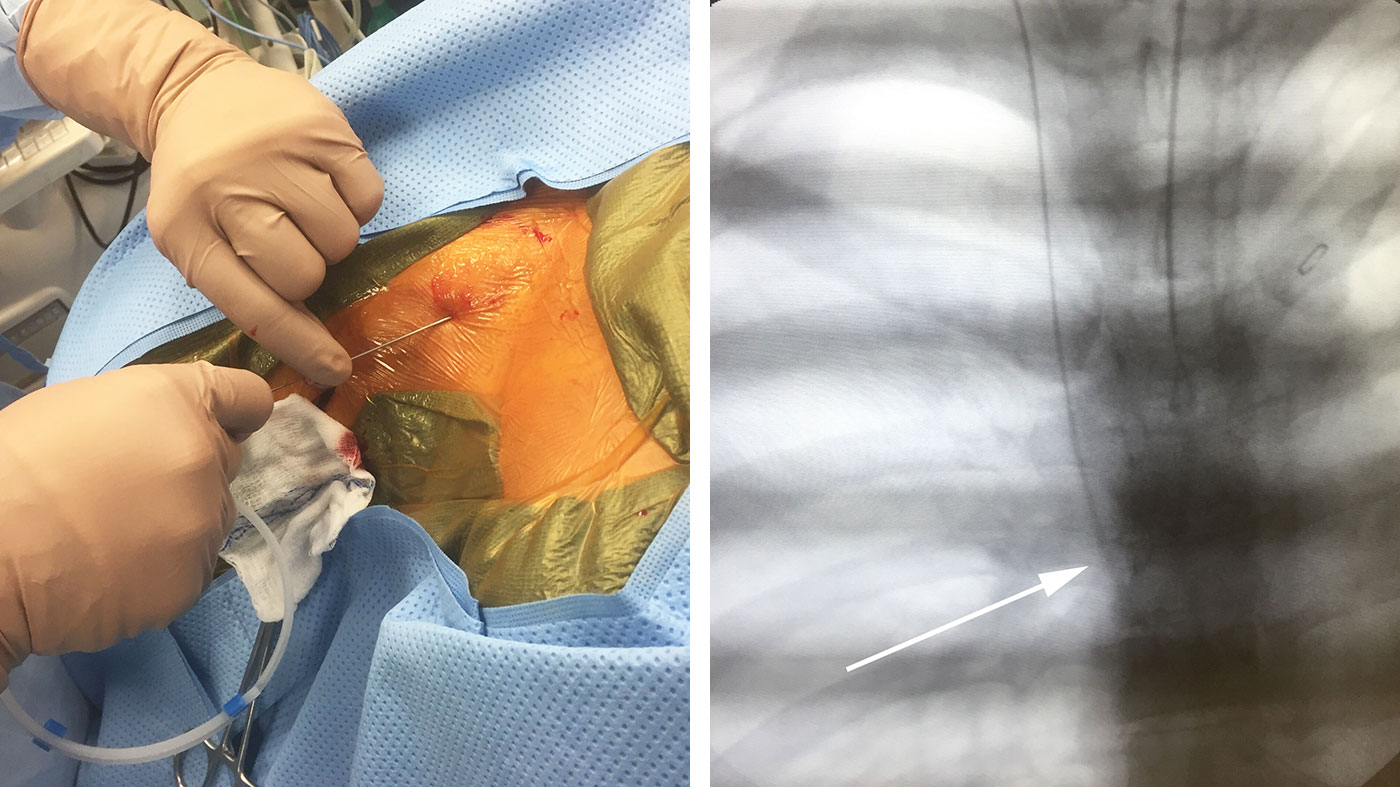 Figure 6: (Left) A J-wire with a soft distal end is advanced through the needle. (Right) Once confirmed that the needle passes easily, it is removed, and the wire is advanced toward the atrium. The wire is visible with C-arm imaging (arrow).

The cardiac monitor might show ectopic beats if the wire is too deep into the right atrium. The wire must be kept secured at all times. If the wire is advanced too deep, the valve and cardiac pressure might suck it into the heart, which would require emergent retrieval by a cardiologist or interventional radiologist.

The veins of most adults and larger children are large enough to accept a standard distal shunt catheter. Common commercially available catheters have an outer diameter of approximately 2.2 mm, which fits through a 7- or 9-French sheath. A smaller catheter might be required in premature infants; in this case, there are commercially available “step-down” connectors that can be used to attach a smaller-caliber catheter to a standard catheter. The venous opening is dilated, and a “peel-away” sheath is placed over the wire. 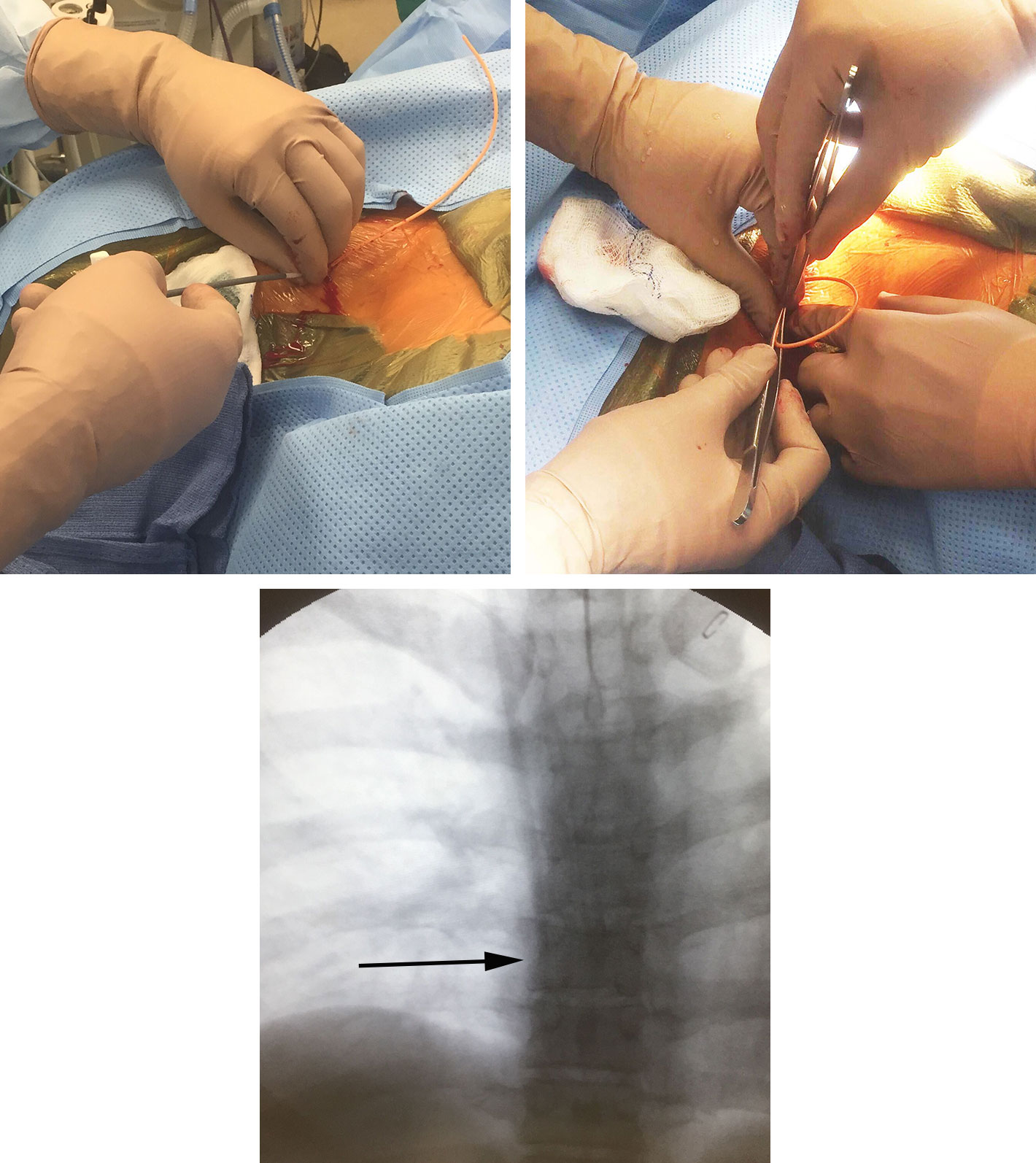 Figure 7: (Top Left) A vessel dilator is passed over the wire, followed by placement of the peel-away sheath. A 7- or 9-French standard sheath generally suffices. (Top Right) The distal catheter is passed through the sheath. (Bottom) The tip of the catheter (arrow) can be seen with C-arm imaging to ensure optimal placement in the atrium.

I recommend testing the size of the sheath with the distal catheter before inserting it. A 7- or 9-French standard peel-away sheath will generally suffice. The distal catheter can be placed over the wire, which might be useful for left-sided shunts, because the vascular anatomy might be slightly more difficult to navigate. However, most often, the catheter can be passed directly through the peel-away sheath after the wire is removed.

The catheter should be flushed with fluid before passing it into the vascular system. The target of the distal tip is approximately T6–T8 or the midatrium. The cardiac monitor is observed and the catheter pulled back if any evidence of ectopic heartbeats appears. The distal catheter is generally visible with C-arm fluoroscopy. Some catheters are more difficult to see via this technique than are others. A small amount of contrast liquid can be injected into the catheter to assist with visualization. The surgeon must be aware of the patient’s head position in approximating the final position of the catheter. If the neck is turned sharply, the catheter might migrate deeper when the neck straightens.

After the cranial and cervical incisions have been closed, the patient should be extubated and examined before leaving the operating room. I advocate obtaining a chest radiograph during the immediate postoperative period to evaluate the final position of the catheter and to rule out the possibility of a pneumothorax. The patient should be observed not only for signs of hydrocephalus but also for arrhythmias or any signs of cardiopulmonary distress. A persistent arrhythmia will generally resolve if the distal catheter is shortened by 1 to 2 cm. Patients whose condition is uncomplicated can be discharged on the first postoperative day.