Please note the relevant information for patients suffering from cavernous malformations is presented in another chapter. Please click here for patient-related content.

Brainstem cavernous malformations (CMs) account for approximately 20% of all central nervous system CMs, with the majority occurring in the pons. These lesions are more likely to become symptomatic because of their location and proximity to the nearby eloquent structures.

The complex vital anatomy of the brainstem and associated neurovascular structures place important functions at risk during microsurgical removal of brainstem CMs. This matter demands a sophisticated decision-making process when considering whether to operate. The natural history of the lesion and the risk versus the benefits of surgery in avoiding the future risk of hemorrhage and potentially relieving the existing deficits must be balanced before offering surgical treatment.

Because of the location of these CMs, 80% to 100% of patients with brainstem CMs present symptomatically, most commonly due to hemorrhage. Compared with supratentorial CMs, microhemorrhages in brainstem CMs are more likely to cause irritation of and mass effect on the brainstem neural structures.

Patients may have previously experienced temporary focal deficits related to small microhemorrhages. The largest percentage of brainstem CMs are found in the pons, followed by the mesencephalon, and then the medulla oblongata. Cranial nerve deficits are therefore the most common presenting symptoms. Other symptoms include ataxia and dysmetria, diplopia, sensory and motor deficits, dysarthria, dysphagia, and altered level of consciousness. Patients may also suffer from nonspecific symptoms such as headaches, dizziness, nausea, and vomiting.

One recent study presented a hemorrhage rate prior to surgery of 4.6% per patient/year and a rehemorrhage rate of 35% per patient/year. This wide variance in published rates can be attributed to the differences in study design (prospective vs retrospective), the differences in definition of hemorrhage (clinical vs radiographic), and inconsistent assumptions regarding the etiology of the lesion (congenital versus de novo).

As expected, t here is some debate in regard to the decision to operate on relatively deep brainstem and asymptomatic lesions. Most neurosurgeons advise observation for asymptomatic patients or patients with relatively inaccessible CMs. Klopfenstein and colleagues consider resection if any one of the four criteria shown in Table 1 are met.

Preoperative Planning and Selection of Approach

Magnetic resonance (MR) imaging is the imaging modality of choice for all CMs; the nuances of diagnosis are discussed in the Evaluation of Cavernous Malformation chapter. 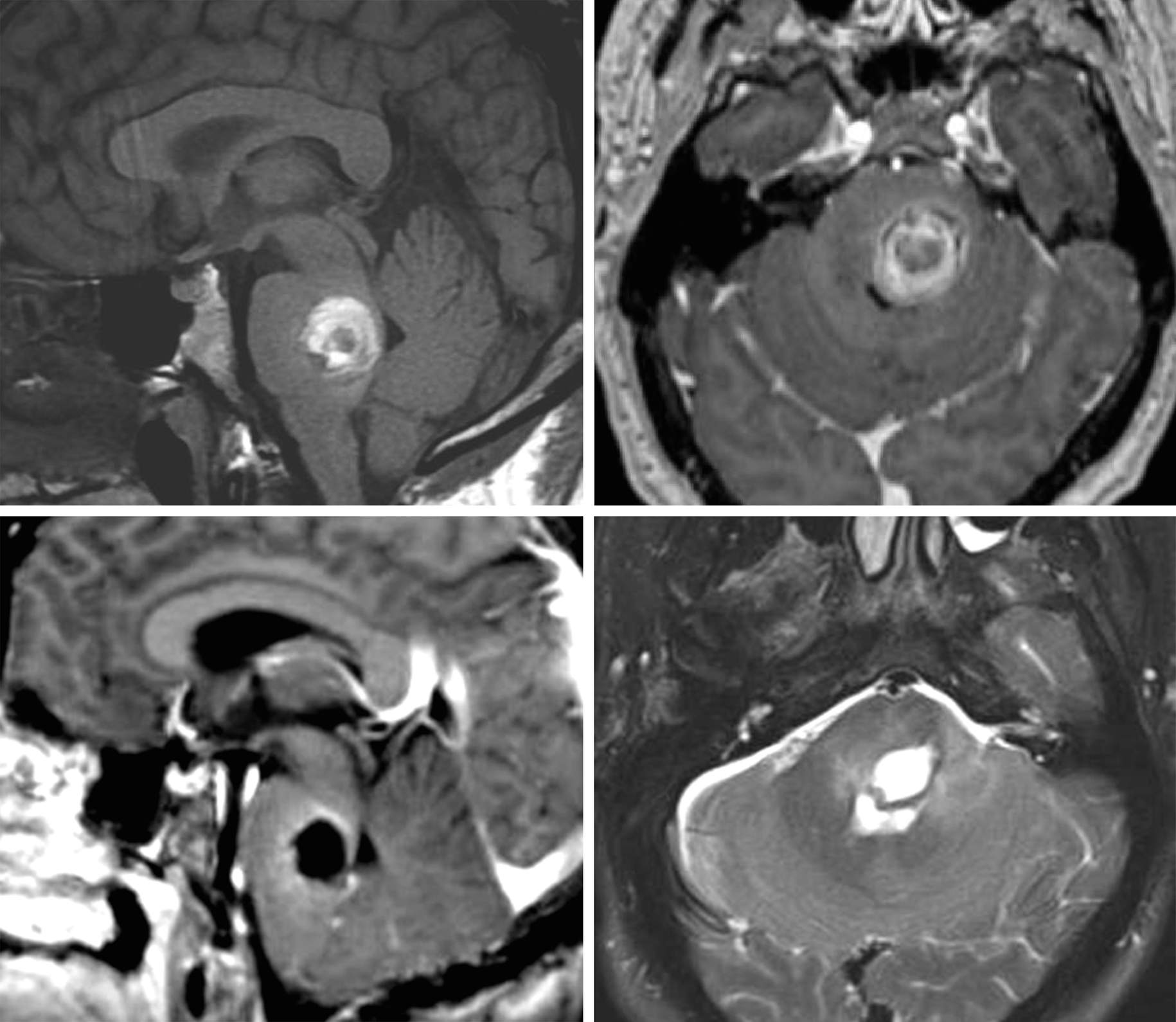 The goal of surgery is complete CM resection with minimal or no disruption of the surrounding vital tissue. Regardless of the surgical approach selected, the surgeon must intimately understand the safe entry zones into the brainstem via various posterior fossa and cranial base craniotomies. 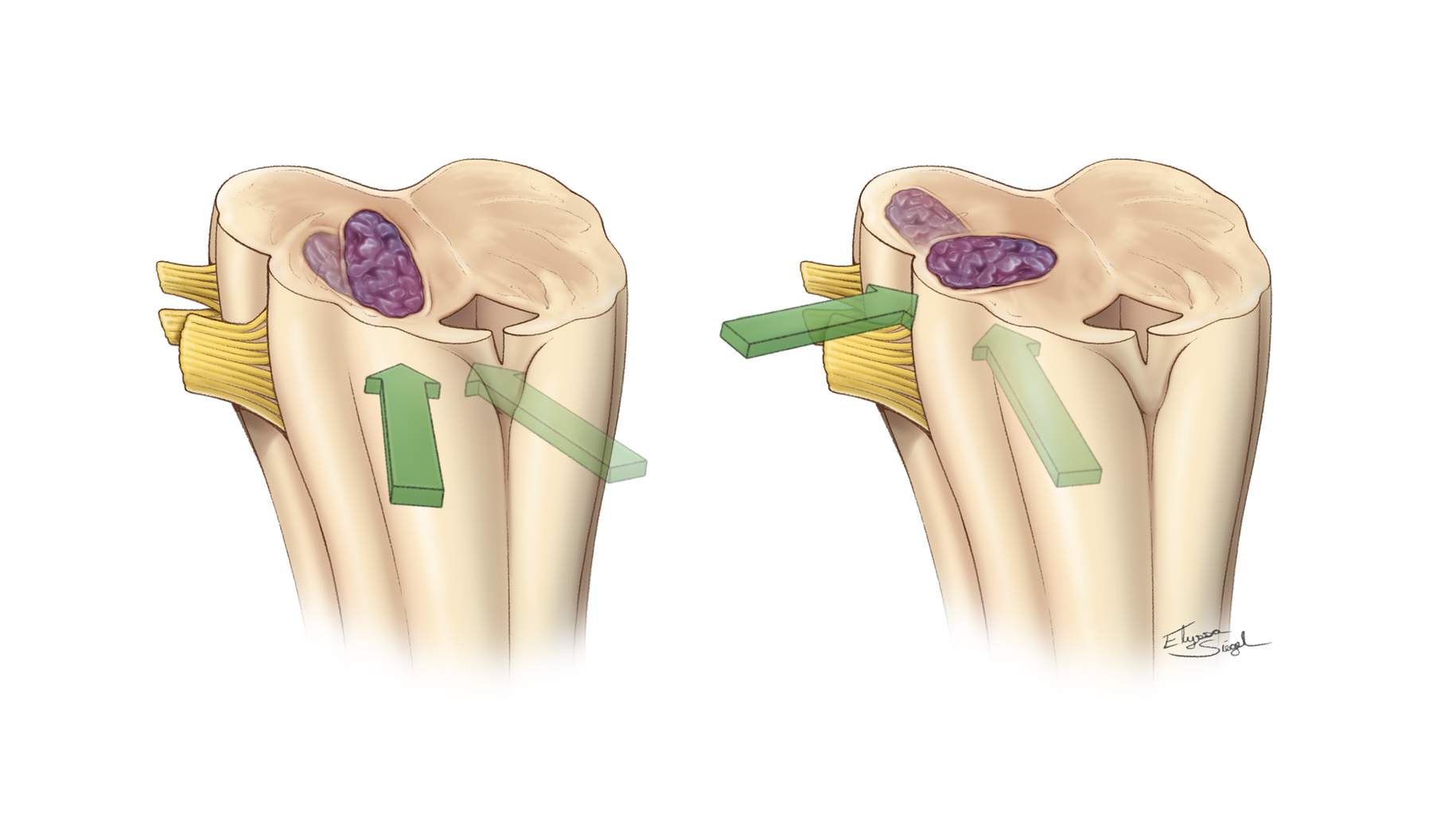 Figure 2: For surgical planning, a T1-wighted sequence is most suitable to establish the shortest transneural operative trajectory using the “two-point” method. The first point is in the center of the lesion, and the second point is at the margin of the lesion nearest a pial or ependymal surface. The line connecting these two points directed along the long axis of the lesion is extrapolated to approximate the best intradural trajectory to approach to the lesion.

Using the “two-point” method, a general guide for approaching brainstem lesions is shown in Table 2. The approach should be tailored to each patient’s individual anatomy. The shortest transneural distance may not be ideal if eloquent structures are transgressed; a longer operative trajectory through less eloquent structures is warranted.

If the CM is expected to be clearly accessible through the fourth ventricular floor without transgressing any neural tissue, a telovelar approach is a reasonable option. However, the presence of any intact neural tissue, no matter how thin, overlying the dorsal aspect of the CM obviates the safety of the telovelar route. In these instances, I reach the lesion via a retromastoid craniotomy and through the middle cerebellar peduncle between cranial nerves V and VII/VIII. The limited transgression of the middle cerebellar peduncle is very well tolerated.

Figure 3: A posterior pontine CM with a thin plate of intact floor (left arrow) is present. Despite the shortest operative trajectory apparent along the floor of the ventricle, the lateral trajectory via the middle cerebellar peduncle (right arrow) was chosen. The thin plate of tissue on the floor is highly functional and contains the facial colliculus. Note the superiority of the T1 sequences for detection of neural tissues versus the T2 sequences that are affected by the blooming artifact caused by hemosiderin. 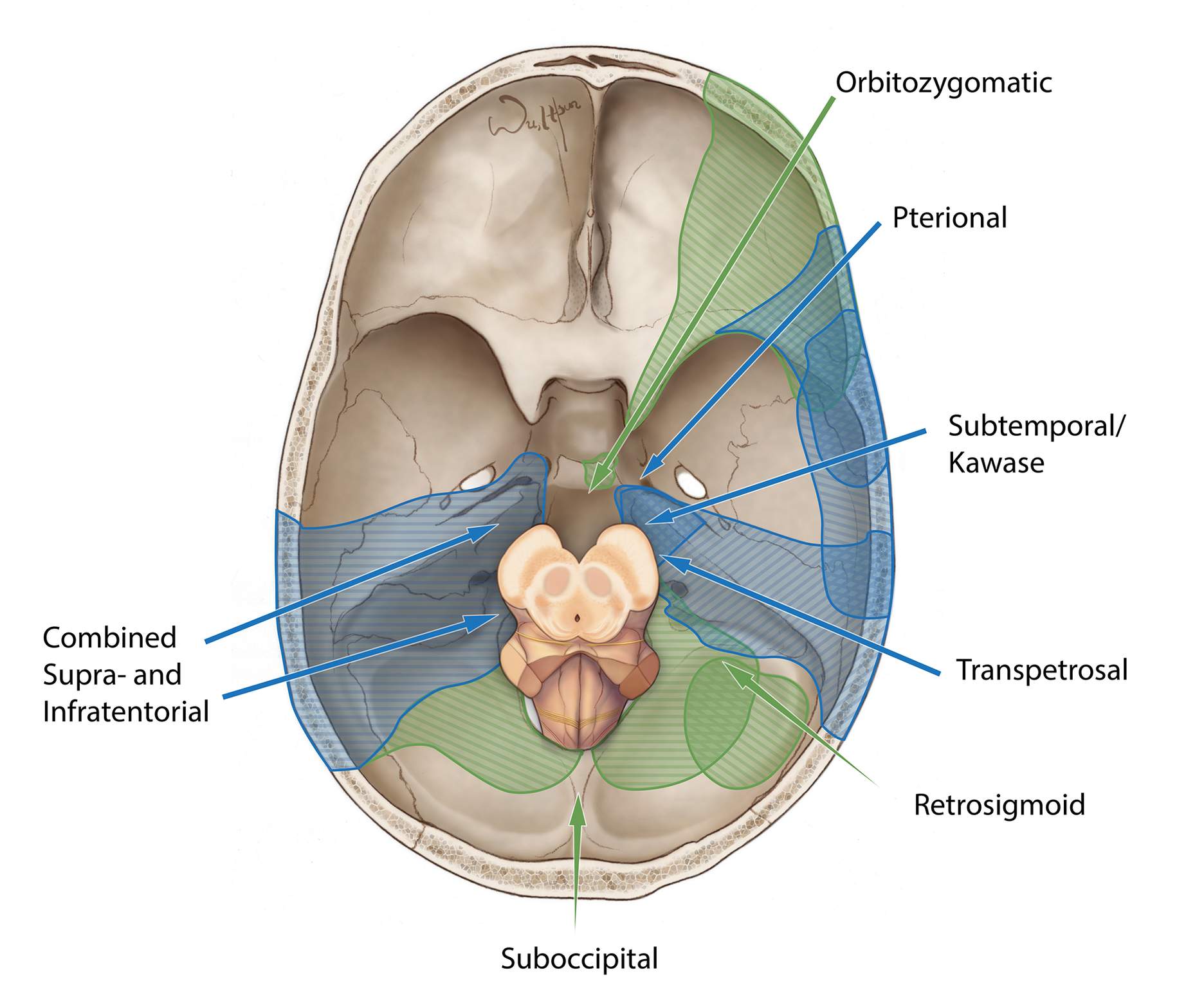 Figure 4: The corresponding craniotomies for reaching different brainstem lesions are demonstrated. Telovelar/suboccipital, retrosigmoid, supracerebellar and orbitozygomatic approaches are favored for most lesions. 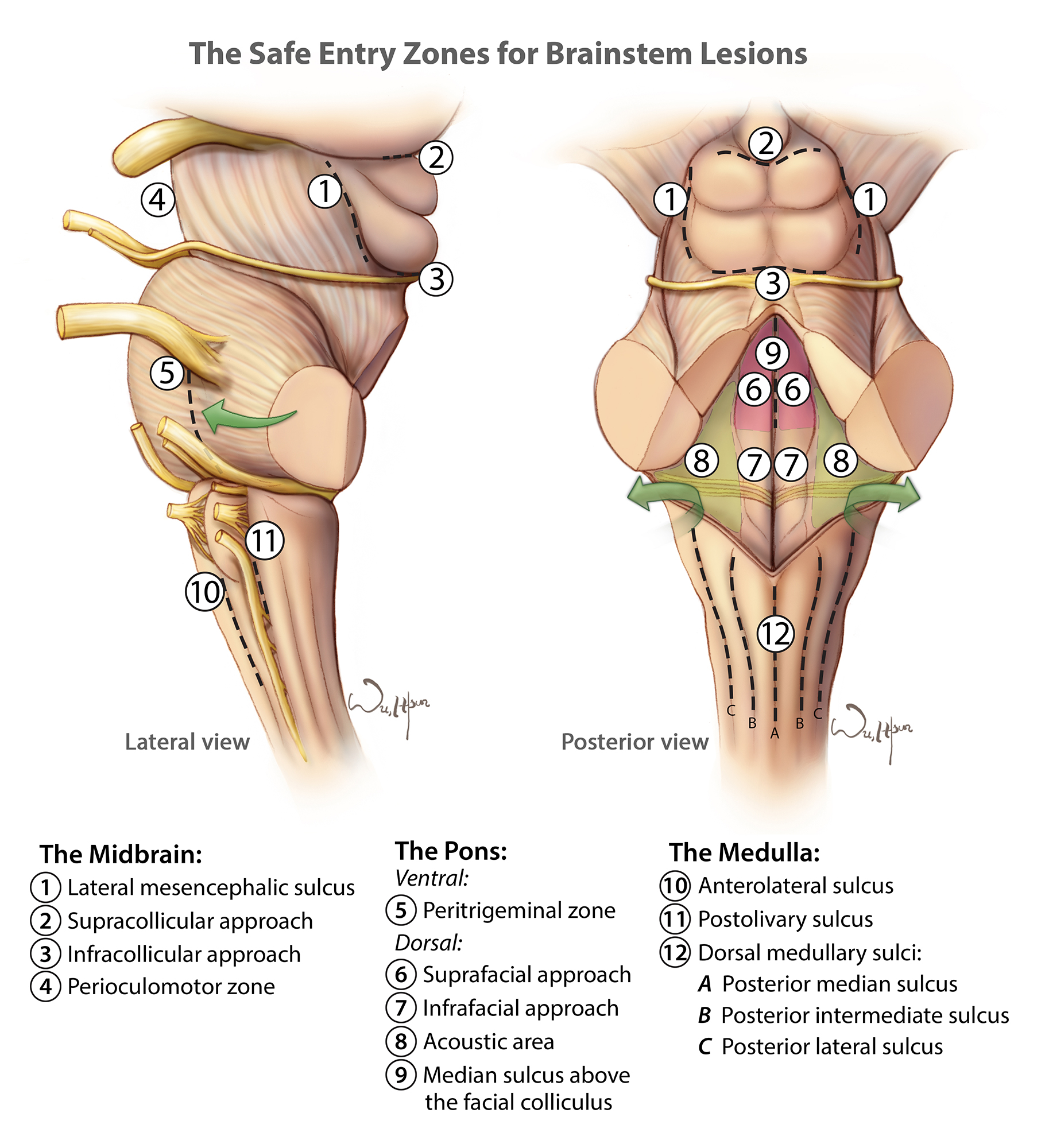 Figure 5: The safe entry zones into the brainstem for resection of CMs have been illustrated. The lateral pontine incision between CNs V and VII-VIII is an effective and safe zone to reach pontine lesions that are not clearly accessible through the fourth ventricular floor.

I use intraoperative image guidance and neurophysiologic monitoring, including somatosensory evoked potentials (SSEP) and brainstem auditory evoked responses (BAERS), for most patients undergoing resection of their CMs within the brainstem. Motor evoked potential are monitored in select patients whose descending motor pathways are at risk. Stimulation mapping of the fourth ventricular floor may be necessary for guiding the ependymal incisions and access to posterior pontine lesions.

A lumbar puncture or drain is beneficial to relieve posterior fossa tension; this is performed before draping the incision. After approaching the target location on the brainstem, a superficial CM will be visualized as a purplish-black lesion with a thin gliotic rim of yellowish hemosiderin. If the lesion is deep, image guidance should be used to precisely identify the safe point of entry.

Next, I make a short linear pial or ependymal incision on the surface of the brainstem (parallel to the descending brainstem fibers) and use fine blunt dissectors and spreading action of the forceps to expand the intraparenchymal trajectory toward the lesion. Dynamic retraction is used and fixed retraction is prohibited on the brainstem. The extent of the trajectory is smaller than the size of the lesion. Once I find the CM, I conduct resection via the following steps:

These important steps are further illustrated below. 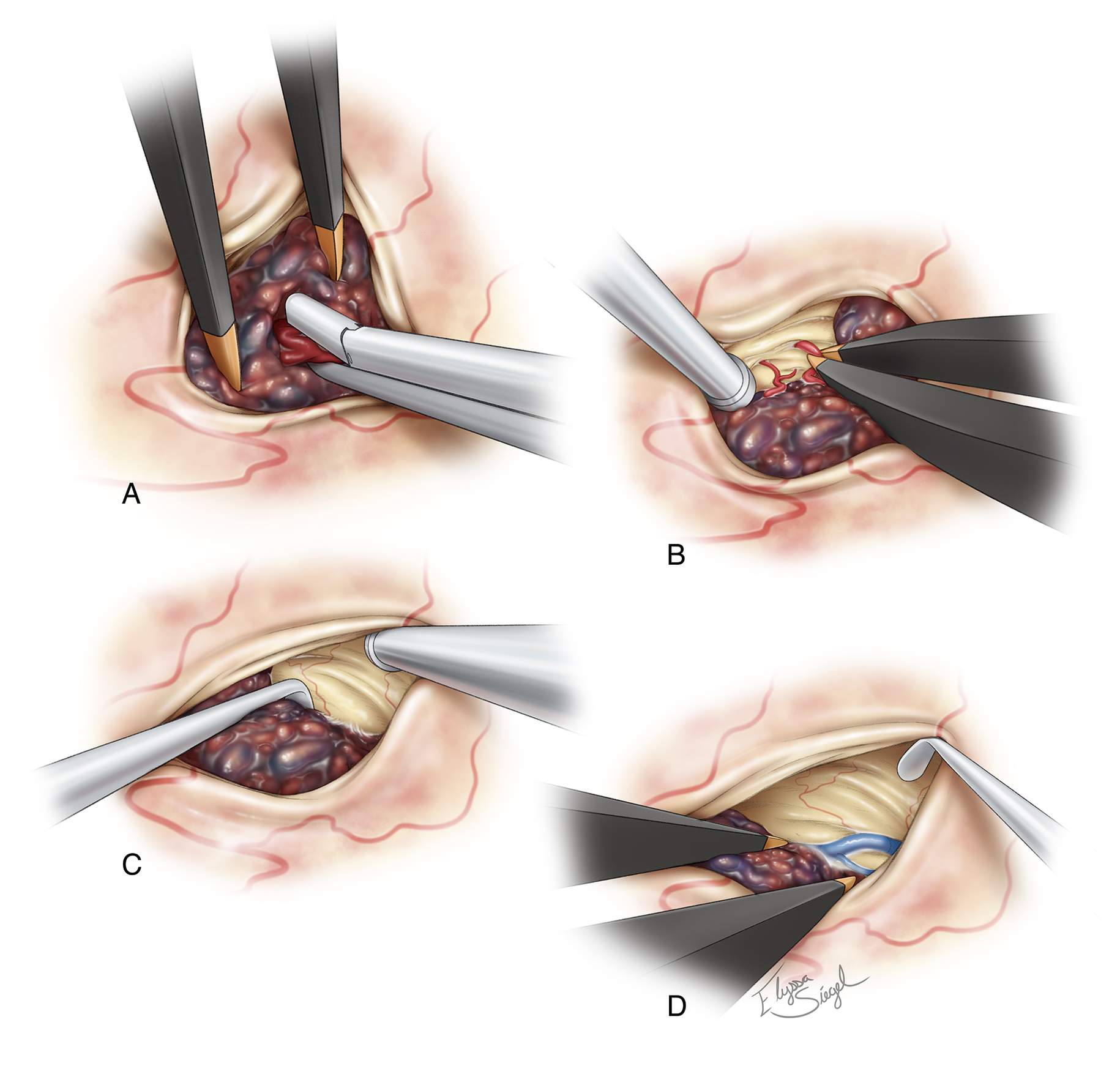 Figure 6: After exposure of the CM, the suction device or pituitary rongeurs are used to evacuate the hematoma from within and around the CM (A). Next, the small feeding vessels are isolated, coagulated, and cut (B). The capsule of the decompressed lesion is mobilized away from the gliotic margins (C). The DVA is carefully protected and mobilized away from the lesion (D). 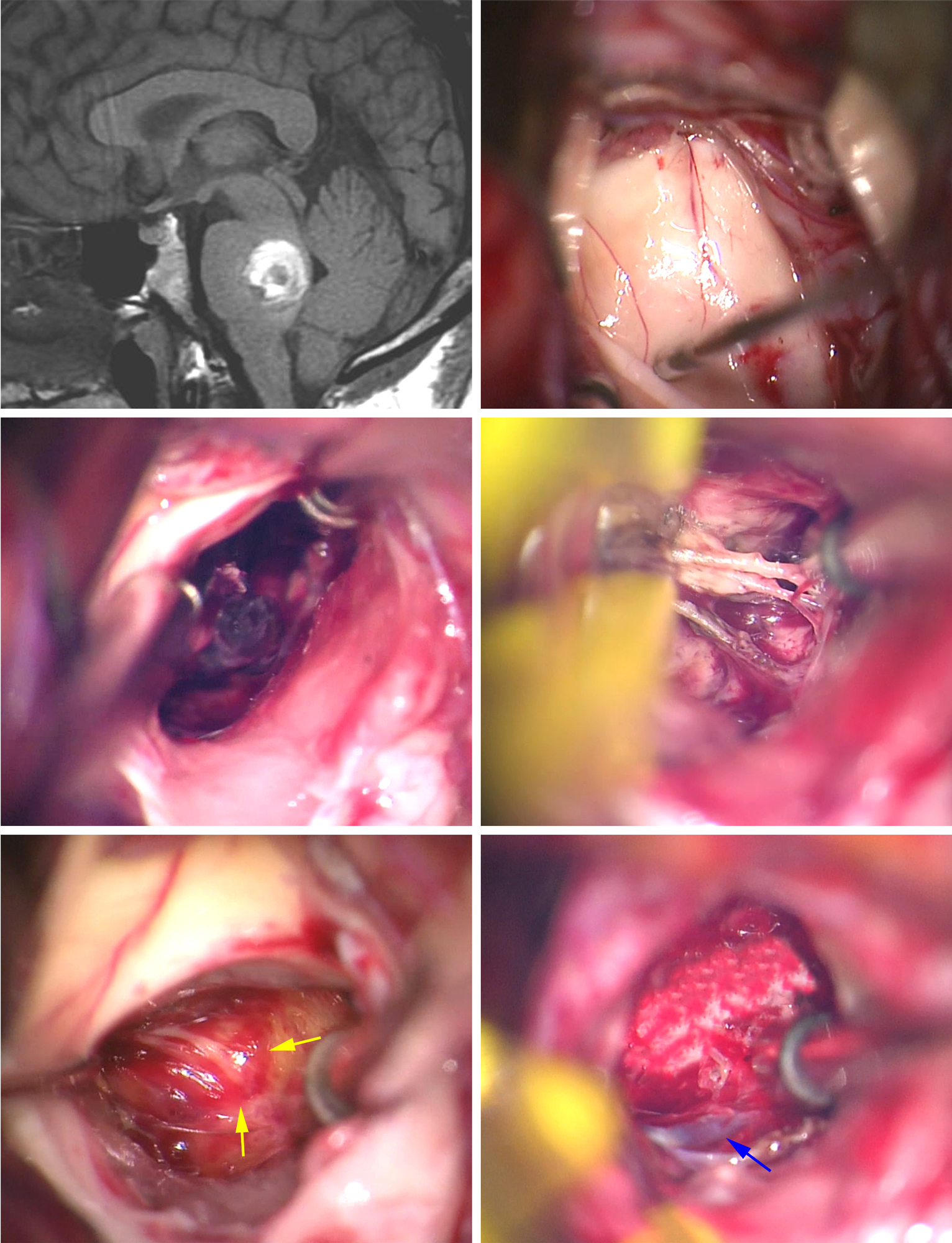 Figure 7: This posterior pontine CM was accessed via the telovelar approach and mapping of the facial colliculus on the floor of the ventricle (upper row of photos). Evacuation of the hematoma provided additional space; the feeding arteries were coagulated and cut (middle row). The capsule was then bluntly dissected away from the gliotic wall (yellow arrows) of the resection cavity while the DVA (blue arrow) was preserved at the end of resection (lower row).

The following steps describe resection of a posterior pontine CM via the telovelar approach. 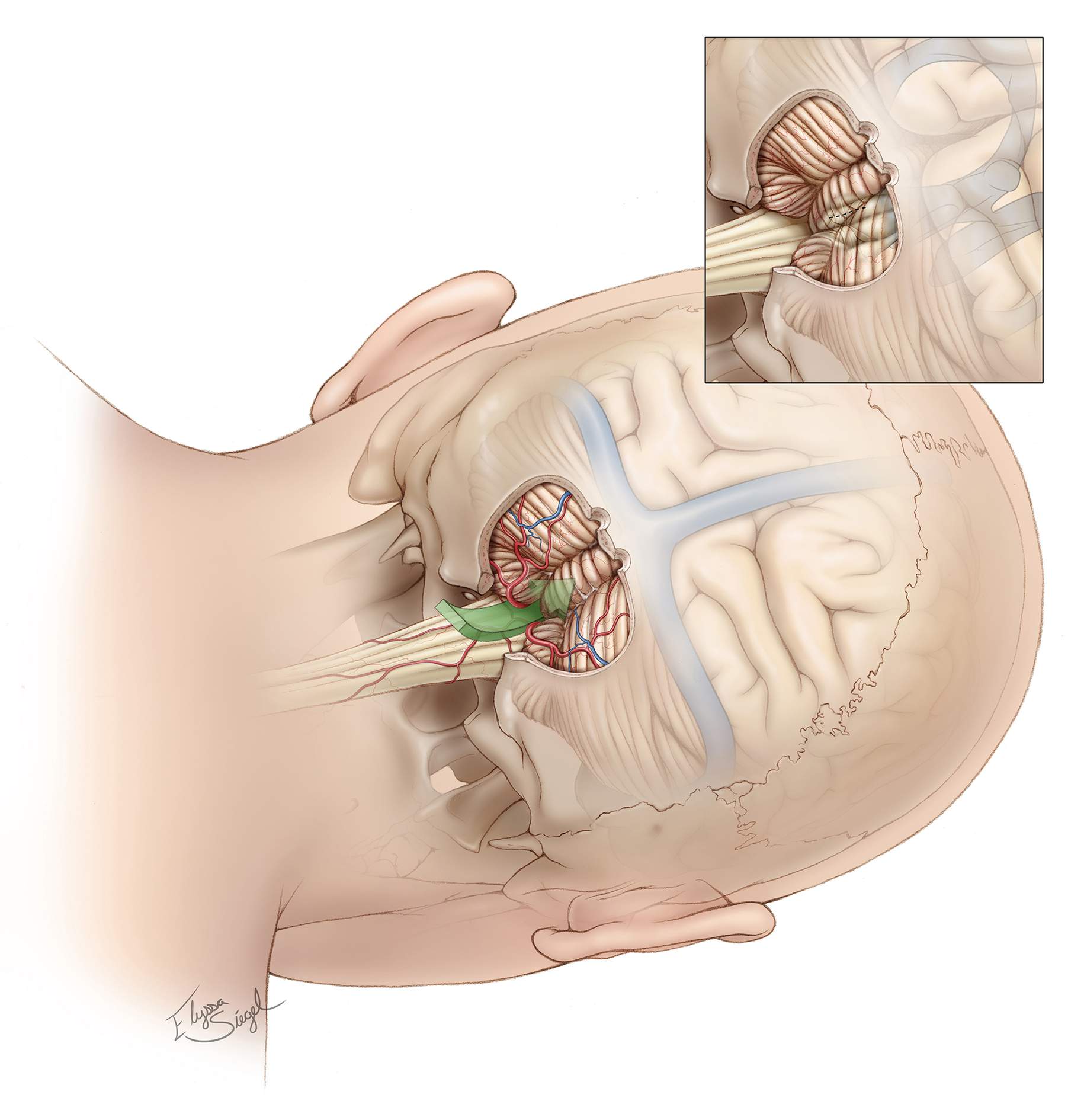 Figure 8: The trajectory of operative dissection for the telovelar approach is depicted. Note that the foramen magnum is unroofed and the tonsils, vermis, and medial aspects of the hemispheres are exposed. The location of the fourth ventricular structures in relation to the overlying cerebellum are shown in the inset sketch. 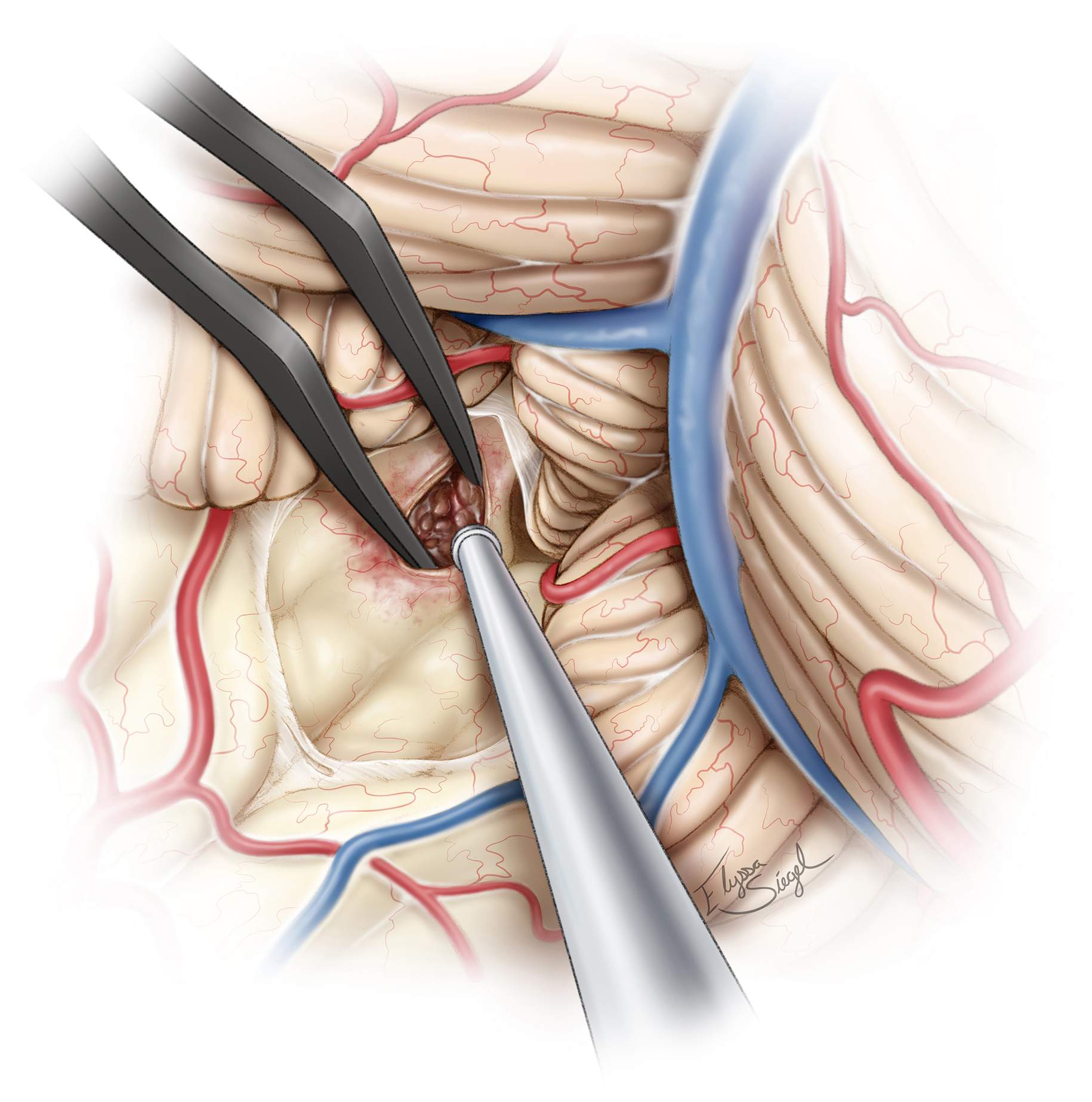 Figure 9: If the CM is apparent on the surface, lesional resection can begin. However, if the CM does not appear on the surface, mapping of the facial colliculus is necessary to avoid its injury. Hypoglossal and vagal triangles are avoided unless the lesion has an exophytic component that has displaced these structures. 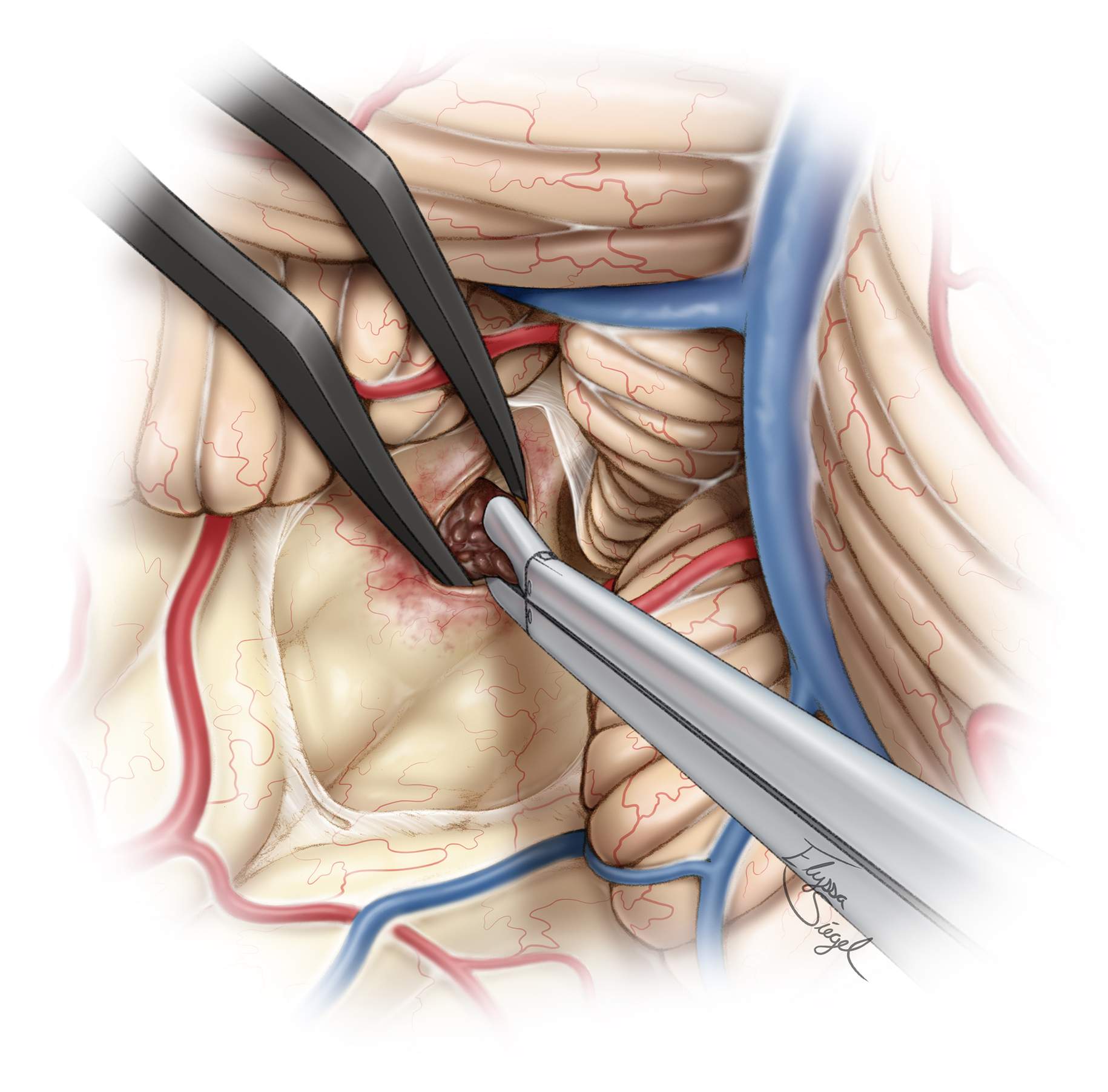 Figure 10: The dynamic motion of the bipolar forceps prevents the walls of the resection cavity from collapsing as piecemeal removal of the CM continues. Gentle fixed retraction on the tonsils may be necessary to allow bimanual dissection within the brainstem. 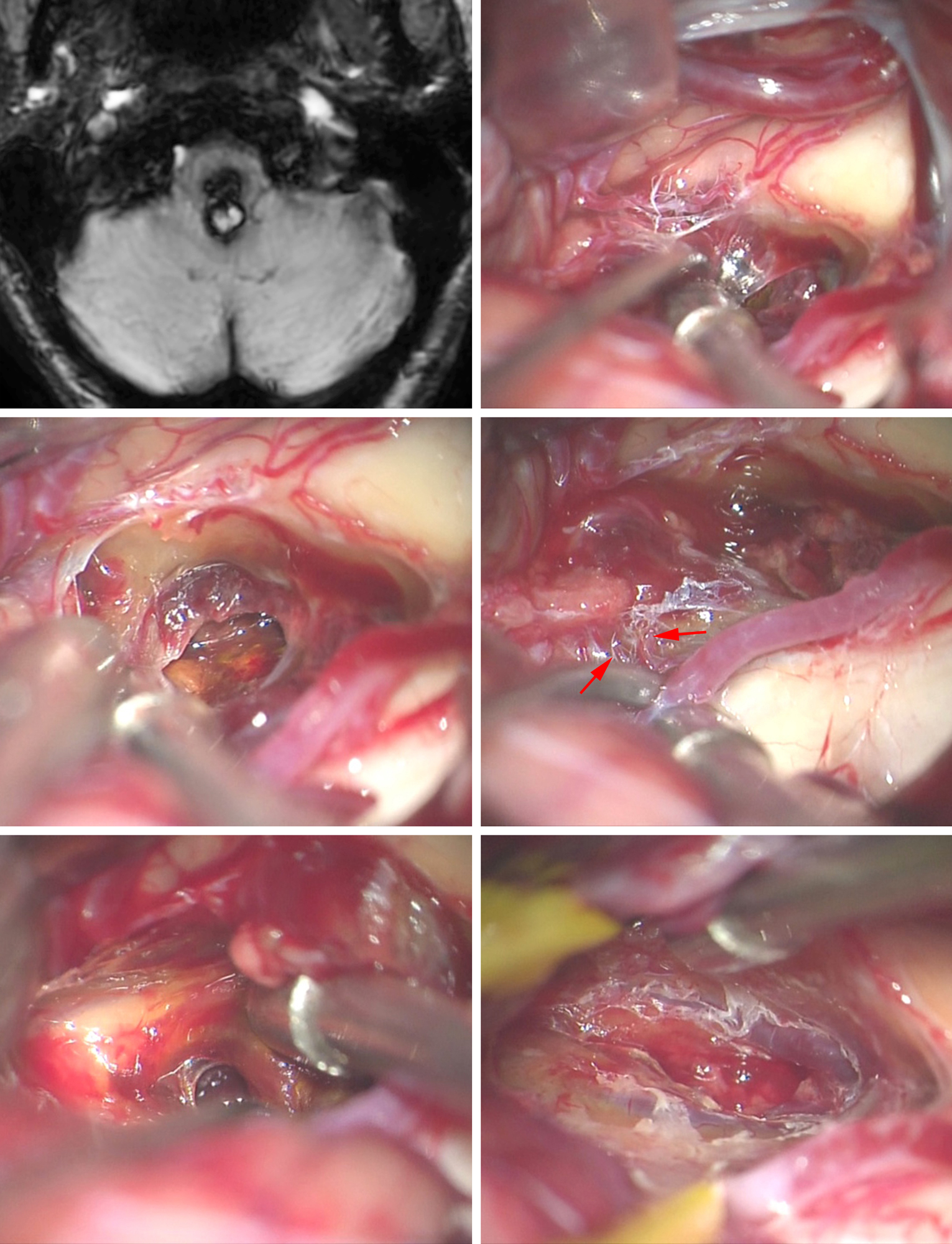 Figure 11: This posterior medullary CM was exposed by means of a suboccipital craniotomy, and the terminal feeding vessels to the CM were identified early (upper row of images). The hematoma within the CM was decompressed, exposing additional terminal feeders arising from the contralateral PICA (middle row, arrows). The CMs can be compartmentalized (left lower image), and therefore a thorough and judicial inspection of the resection cavity is essential for their gross total resection. The DVAs are evident on the walls of the cavity (right lower image). 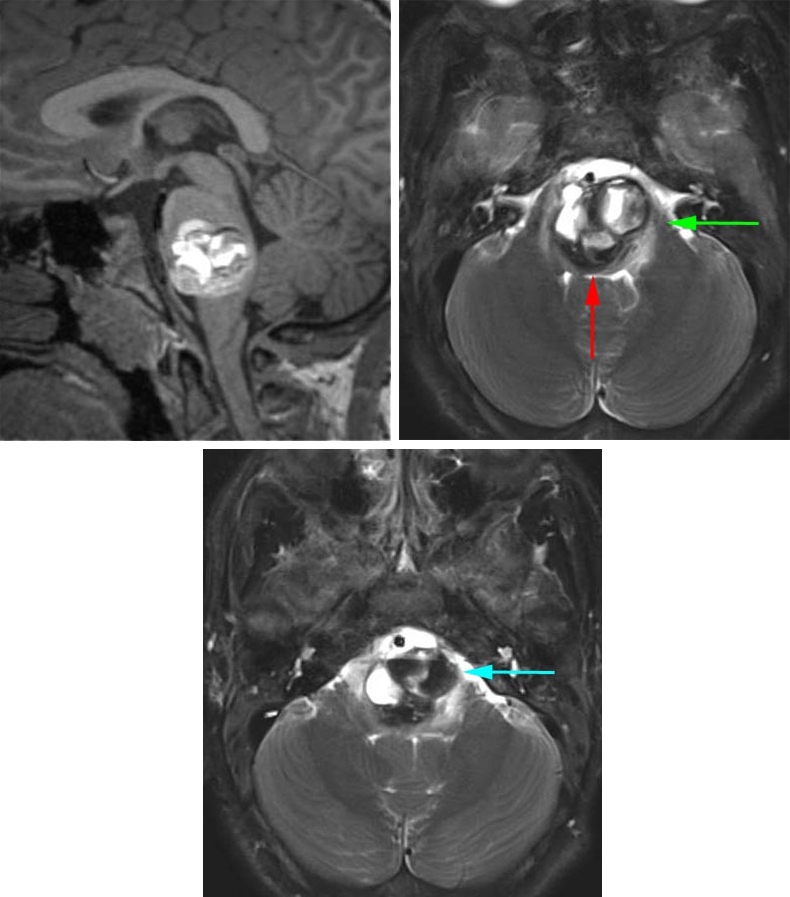 Figure 12: This pontomedullary cavernous malformation was situated essentially within the center of the brainstem. There was a thin rim of normal fourth ventricular floor at the posterior edge of the lesion that precluded the use of a posterior midline approach (red arrow). I used the left-sided retrosigmoid route (green arrow) to create a pial incision between CN's V and VII/VIII to enter the superior section of the lesion. In addition, the mass reached the pial surface at the level of the pontomedullary junction and this second operative corridor was also accessed (blue arrow) to remove the inferior pole of the malformation.

Patients should be transferred to the neuro intensive care unit and may need to remain intubated for at least 24 hours after surgery based on the location of the resected lesion within the brainstem and its proximity to the lower cranial nerves and their nuclei. Brainstem edema may result in respiratory failure during the immediate postoperative period. Many deficits are temporary due to traction on the cranial nerves and the surrounding neural tracts.

Most patients transiently worsen neurologically, but most recover to their baseline or show improved neurologic function. Patients with a potential risk of lower cranial nerve dysfunction should undergo otolaryngologic evaluation before they are extubated or their oral feedings resumed.