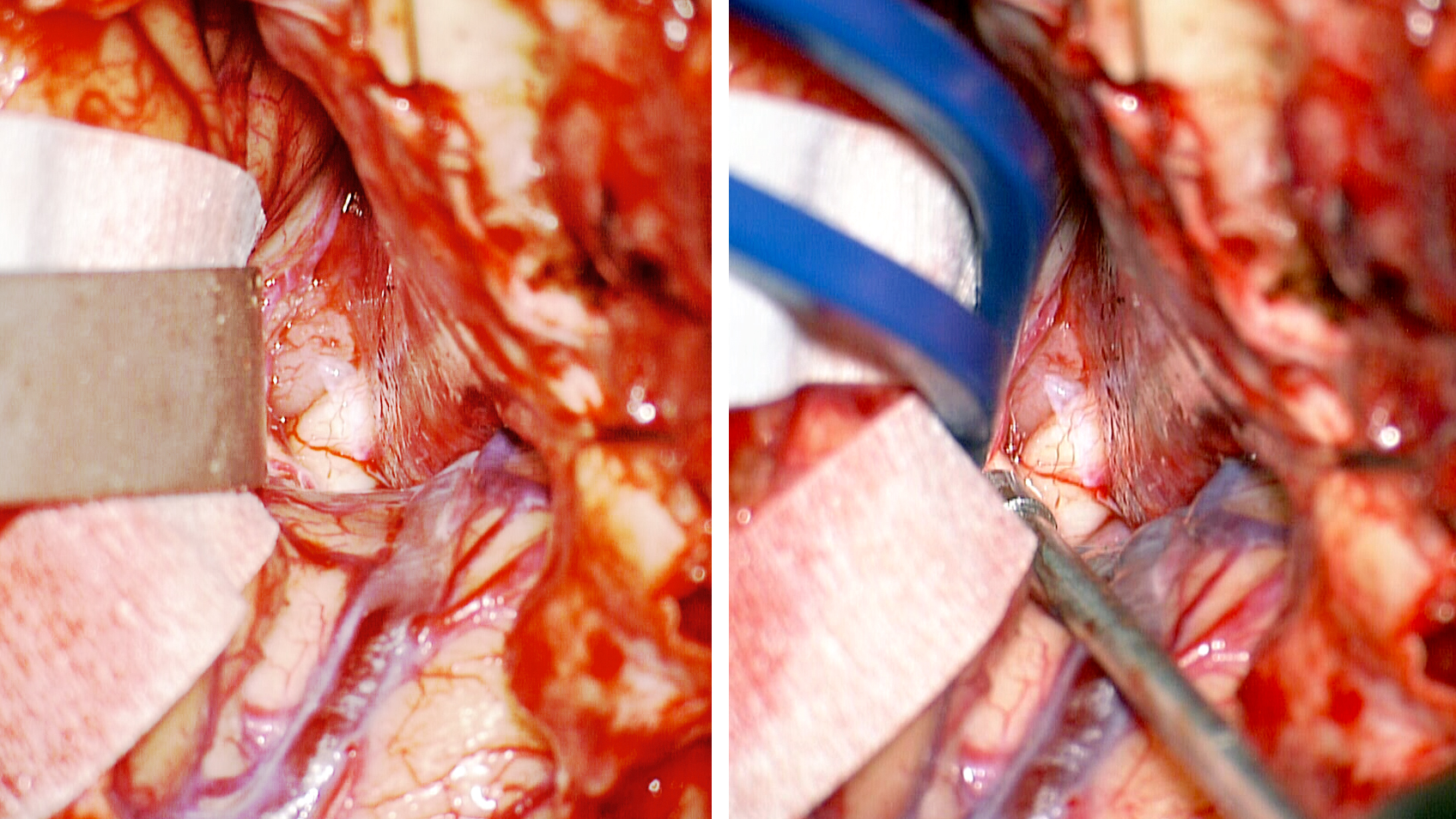 Figure 1: The use of a fixed retractor blade (left) and dynamic retraction (using bipolar forceps and suction device, right) for a subfrontal trajectory and exposure of the optic nerve is compared. Dynamic retraction places the brain under less tension due to a more distributed retraction pressure.

Aneurysm surgery takes place around the basal cisterns, and therefore requires brain mobilization to facilitate a suitable subarachnoid trajectory for dissection of the relevant vascular territories and the aneurysm. Although fixed retractor blades are helpful in freeing the surgeon’s hands so he or she can conduct the deeper portions of the dissection, this form of retraction comes at the price of potential brain injury and should be very selectively and judiciously applied.

Parenchymal injury during fixed retraction arises from two pathophysiologic mechanisms. First, the force of the retractor blade on the brain may cause direct damage resulting in a hematoma and/or necrosis. Second, the pressure gradient across the edges of the retractor blade may occlude the regional blood vessels, resulting in ischemic injury that may not manifest during the operation, but will produce long-term neurologic consequences for the patient.

I actively attempt to avoid fixed retractor blades because this form of retraction does not constantly sense the resistance or compliance of the brain. On the other hand, dynamic retraction via the suction device continuously updates the surgeon regarding the resistance of the brain to mobilization. I have avoided the term “retraction” and prefer to use the term “dynamic mobilization.” Dynamic refers to ever-changing gentle retraction based on the feedback of the brain and the active demands of microsurgery, using instruments rather than static blades. These concept are further reviewed in the following pragraphs.

More recent reports claim that late surgery results in equivocal outcomes; this has led to earlier intervention in order to prevent aneurysmal rebleeding, a major cause of mortality among patients who survive the initial hemorrhage. This philosophy also facilitates the use of hypervolemia and hypertension treatment in the presence of a secured aneurysm during the vasospasm period.

Proper measures should be undertaken before and during the retraction process. The use of hypotension and hyperventilation along with brain retraction should be avoided. These modalities decrease cerebral perfusion pressure, reducing the threshold of the retractor’s pressure gradient that is necessary to cause significant ischemia. Additionally, certain volatile anesthetics reduce cerebral blood flow and thereby directly affect how long and at what force retraction should be applied.

Mannitol is beneficial and reduces brain edema while maintaining perfusion. Mannitol may be more efficacious via prolonged, small, repeated dosing as opposed to bolus dosing at the time of surgery. Hypothermia is also useful in the prevention of parenchymal ischemia because it reduces the metabolic rate of the neural tissues.

Importantly, fixed retraction should not replace strategic brain mobilization through meticulous arachnoid dissection, careful placement of the handheld suction apparatus, ergonomic gravity retraction, and appropriate selection of the operative corridor and skull base approaches. All these measures should be used before fixed retraction is considered. Operative experience enables the surgeon to achieve more through less generous exposures.

Appropriate patient’s head positioning is important for arachnoid dissection to mobilize the brain most effectively using gravity. Neck extension and lateral head positioning during pterional and interhemispheric craniotomies, respectively, are examples of this approach. The corresponding fissures are split and all subarachnoid bands lysed to prevent tension on the parenchymal surface during displacement of the lobe.

The initial dissection strategy is important because it localizes the relevant neurovascular anatomy. The surgeon must prevent direct occlusion of an artery by the retractor blade or suction device. Direct distal retraction on a branching artery with the retractor blade can also lead to confusion about its patency during intraoperative fluorescence angiography.

The type of bleed that has occurred directly affects how the brain will respond to the vector of mobilization. If an intraparenchymal clot is present, the aneurysm dome is likely to adhere to the clot. Aggressive mobilization of a tense brain may detach the aneurysm dome, resulting in an intraoperative aneurysm rupture. Partial clot decompression and suitable proximal control should prevent and manage such a rupture.

Although I am generally against fixed retraction and minimize its use when possible, there are some circumstances when the transient use of fixed retractor blades is prudent and even potentially necessary:

I consider the function of the retractor blade to be a “holder” or “protector” rather than a retractor. The retractor blade should not be used to “fight” the tight brain and create operative space. Such a maneuver leads to spontaneous cortical venous bleeding and retraction injury that will be apparent on the postoperative scans.

The retractor arms should be positioned so that they come up from below the level of the operative field. Placement of the arms above the operative field crowds the surgical space and facilitates their inadvertent displacement. Tefla strips should be used as padding between the retractor blades and the brain surface to prevent the sharp edges of the blades from causing pial injury.

If prolonged retraction is absolutely required, transient retraction-free periods are necessary. The intermittent release of retraction facilitates reperfusion and reduces the risk of ischemia. Only the exact working area should be exposed through the blades; the use of multiple retractors is not advised.

Microsurgical dissection must minimize extraneous brain injuries and transgression through proper planning of the operative approach and patient positioning. Some of the key factors in successful operative planning are the use of gravity retraction, enhanced bone removal, brain relaxation, wide arachnoid dissection, and most importantly, strategic use of dynamic retraction and handling of the normal brain during manipulation of the surgical target.

The microinstruments within the operative field and, more specifically, the suction device may be used as “dynamic retractors” to briefly displace small areas of the brain tissue. The shaft and tip of the suction apparatus may be used to retract in two ways. First, the suction tip applies tension where the microdissection is taking place. Second, the shaft of the suction mobilizes the more proximal portions of the brain that may obstruct operative viewing. The suction strength is modulated by changing the amount of airflow so that the fine pial vessels are not pulled into the bore of the suction device. The bipolar forceps and microscissors may also be used for retraction when necessary.

Most frequently, it is not one device that acts as the dynamic retractor but rather the interaction of both devices at hand. There is a learning curve involved in routine use of dynamic retraction. In addition, the exposure of the pathology is somewhat limited; the operator has to work around this limitation with detailed anatomical understanding of the pathology.

I gradually abandoned the use of retractor blades within the past years as I found the blades to be often interfering with my surgical maneuvers. The blades exert a very inflexible vector of retraction. This constant vector of retraction is not able to interact with the momentous demands for operative exposure at the exact site of dissection. In fact, the broad blade can sometimes compromise dissection within deep narrow operative corridors by creating tension on the wall of surrounding pial surfaces.

Finally, the avoidance of retractor blades requires a properly planned craniotomy and removal of bony skull base obstacles. These obstacles include the sphenoid wing, clinoid, petrous apex, and the condyle.

Clip Ligation of a Contralateral P1 Aneurysm via Dynamic Retraction. The use of fixed retractors would compromise the exposure of the very deep operative corridor in this case and increase the risk of the operation.