Meningiomas originating from the tentorium cerebelli account for about 3% to 6% of all intracranial meningiomas and about 30% of the meningiomas found in the posterior fossa. Like other meningiomas, these tumors are most common among middle-aged women.

The slow growth of tentorial meningiomas contributes to their typically insidious clinical course, which often allows these tumors to grow quite large before diagnosis. Medial tentorial meningiomas may present with a variety of clinical signs and symptoms, depending on their size, exact location, scope of edema, and whether they project into the supratentorial or infratentorial spaces.

Parenchymal edema is highly suggestive of pial invasion. Magnetic resonance angiogram and venogram determine the patterns of vascular displacement and encasement. The venogram evaluates the patency of the vein of Galen, straight sinus, and associated deep diencephalic veins. The patency of the transverse and sigmoid sinuses is studied for lateral tentorial tumors. Occluded venous sinuses may be resected, but those that are partially patent are preserved at the expense of radical subtotal tumor removal.

Catheter angiography is unnecessary because it has been replaced by noninvasive vascular imaging modalities, including computed tomography (CT) angiogram. Preoperative embolization is not a consideration because the artery of Bernasconi and Cassinari of the meningohypophyseal trunk, the marginal tentorial branch of the inferolateral trunk, and the tentorial branches of the superior cerebellar and posterior cerebral arteries supply the tentorium. These small vessels are difficult to cannulate, and their embolization offers little advantage when it is successful. CT scan is usually unnecessary because tentorial tumors rarely cause hyperostosis or bone erosion. 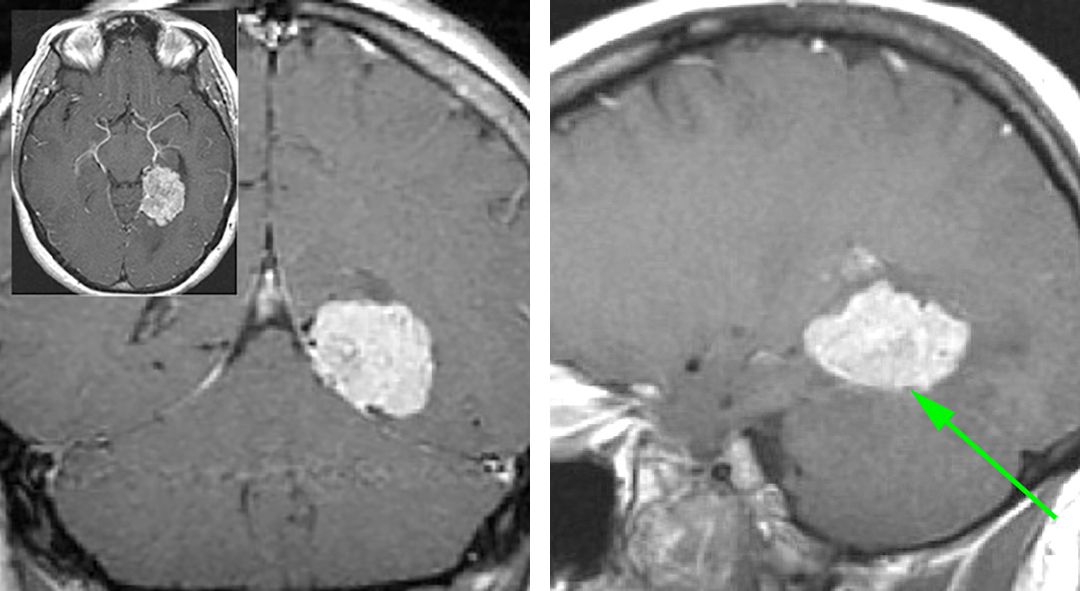 Figure 1: A medial tentorial meningioma is shown. I approached this tumor via the supracerebellar transtentorial approach to avoid the risks of retraction on the dominant temporal lobe. 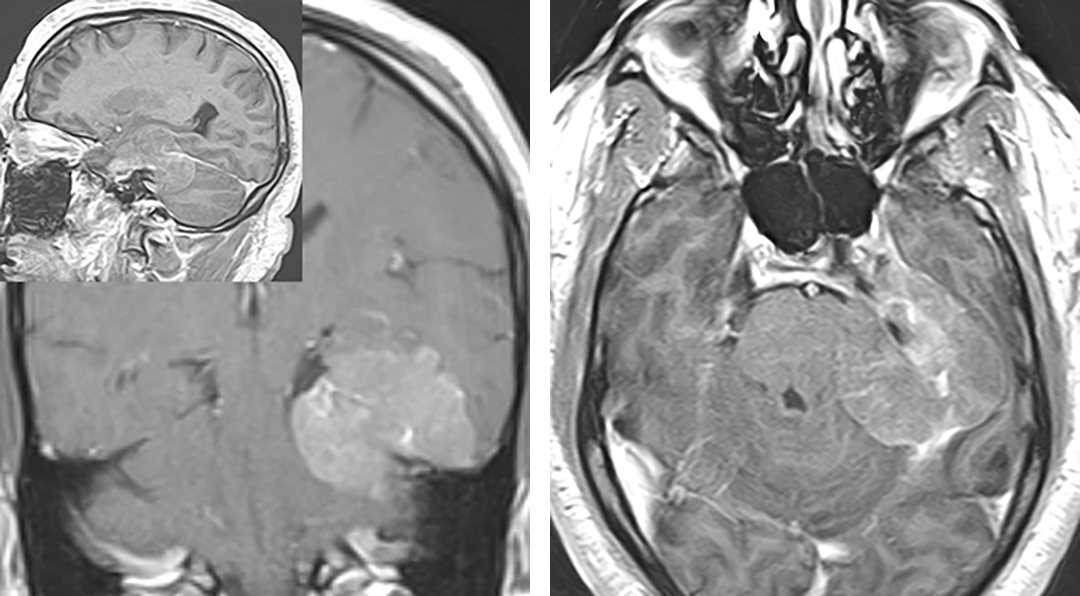 Figure 2: Tentorial meningiomas, such as this one, may extend along the entire surface of the tentorium. In this patient, the posterior fossa component led to compressive symptoms. The tumor was removed through a two-stage operation via retromastoid and subtemporal craniotomies.

Symptomatic lesions or lesions with documented growth on imaging deserve surgical treatment. Although the best opportunity for this type of resection is during the first operation, the overall goal of surgery is maximal tumor removal with maintenance of preoperative neurologic function and improvement of any existing deficit that is caused by mass effect of the tumor.

If the tumor exerts supratentorial mass effect on the brain or there is evidence of pial invasion and edema, I recommend seizure prophylaxis.

A lumbar drain is placed for cerebrospinal fluid (CSF) drainage and intraoperative relaxation of the intracranial tension or cerebellum. This is an important step because this maneuver increases the dimensions of the operative corridor, particularly for younger patients. In select patients, intraoperative CT angiogram may be used to locate large tentorial veins that can complicate tentorial sectioning.

If the subtemporal approach is considered for lateral tentorial lesions, the location of the vein of Labbe is an important consideration. Similarly, lumbar CSF drainage plays an important role for temporal lobe relaxation.

The inner ring of the tentorium (the tentorial incisura) surrounds the brainstem and is closely related to CNs III and IV, the deep venous system, and the posterior circulation. 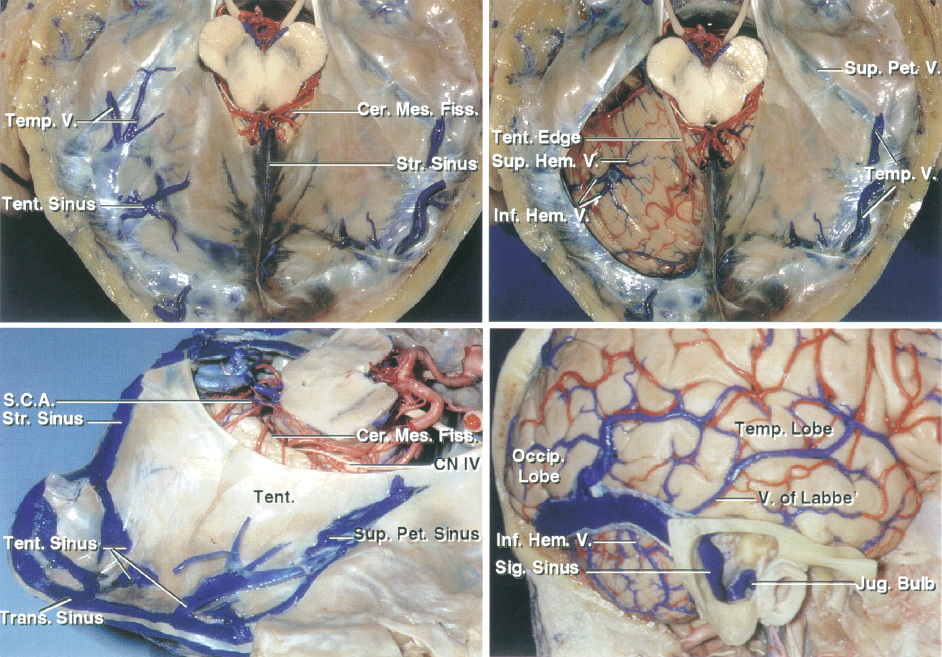 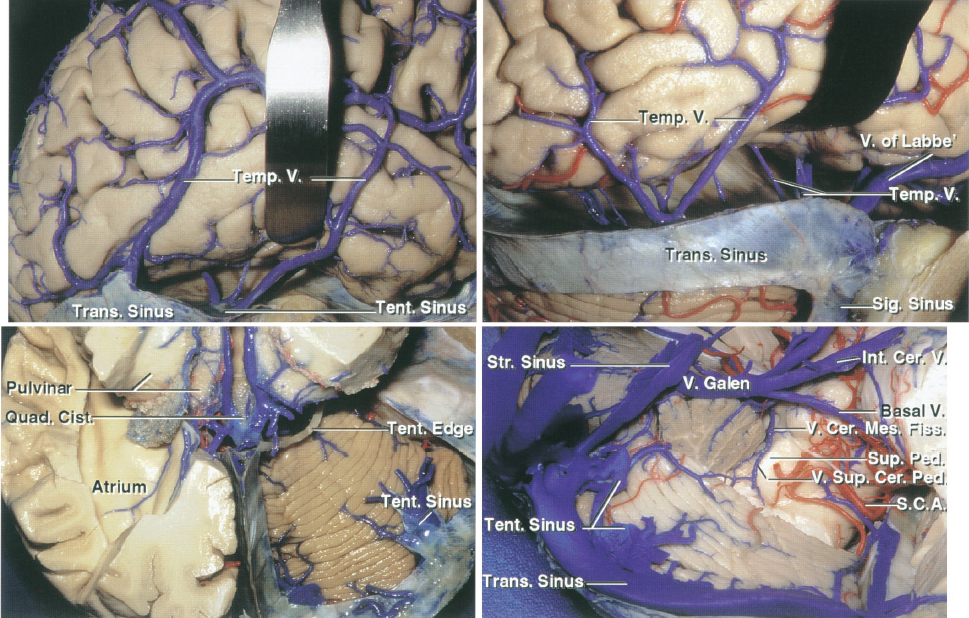 Figure 4: The subtemporal route toward the medial tentorium can be problematic because the temporal lobe elevation places the vein of Labbe and other temporal bridging veins at risk (upper row). The neurovascular anatomy at the tentorial incisura is summarized (lower row)(images courtesy of AL Rhoton, Jr).

The tentorium harbors variable numbers and patterns of venous lakes and sinuses. These sinuses may be functionally prominent in the presence of atrophic or compromised transverse and sigmoid sinuses (caused by lateral tentorial meningiomas). Torrential venous bleeding may occur during transection of the tentorium via the transtentorial approach. This bleeding is readily controlled using Gelfoam packing. Bipolar coagulation worsens the bleeding by shrinking the tentorial leaflets and expanding the tear. I have never witnessed an unwanted effect from occlusion of tentorial venous lakes of sinuses.

The best operative approach for any specific tentorial meningioma depends on the tumor’s location, dimensions, texture, the extent of vascular encasement, and whether it projects into the supratentorial or infratentorial space or both. The patient’s neurovascular anatomy may also affect the choice of the operative trajectory.

I prefer to use the minimally disruptive paramedian supracerebellar infratentorial transtentorial approach for the majority of medial tentorial meningiomas, whether they project superiorly, inferiorly, or both. When performed properly, this corridor creates a panoramic corridor to all components of the tumor, even toward the portion of the lesion extending contralaterally. This approach is detailed below.

Please refer to the Transtentorial Approach to Parahippocampal Lesions chapter for the initial steps of the operation, including the exposure.

The transtentorial route for a purely supratentorial medial tentorial meningioma is described below. 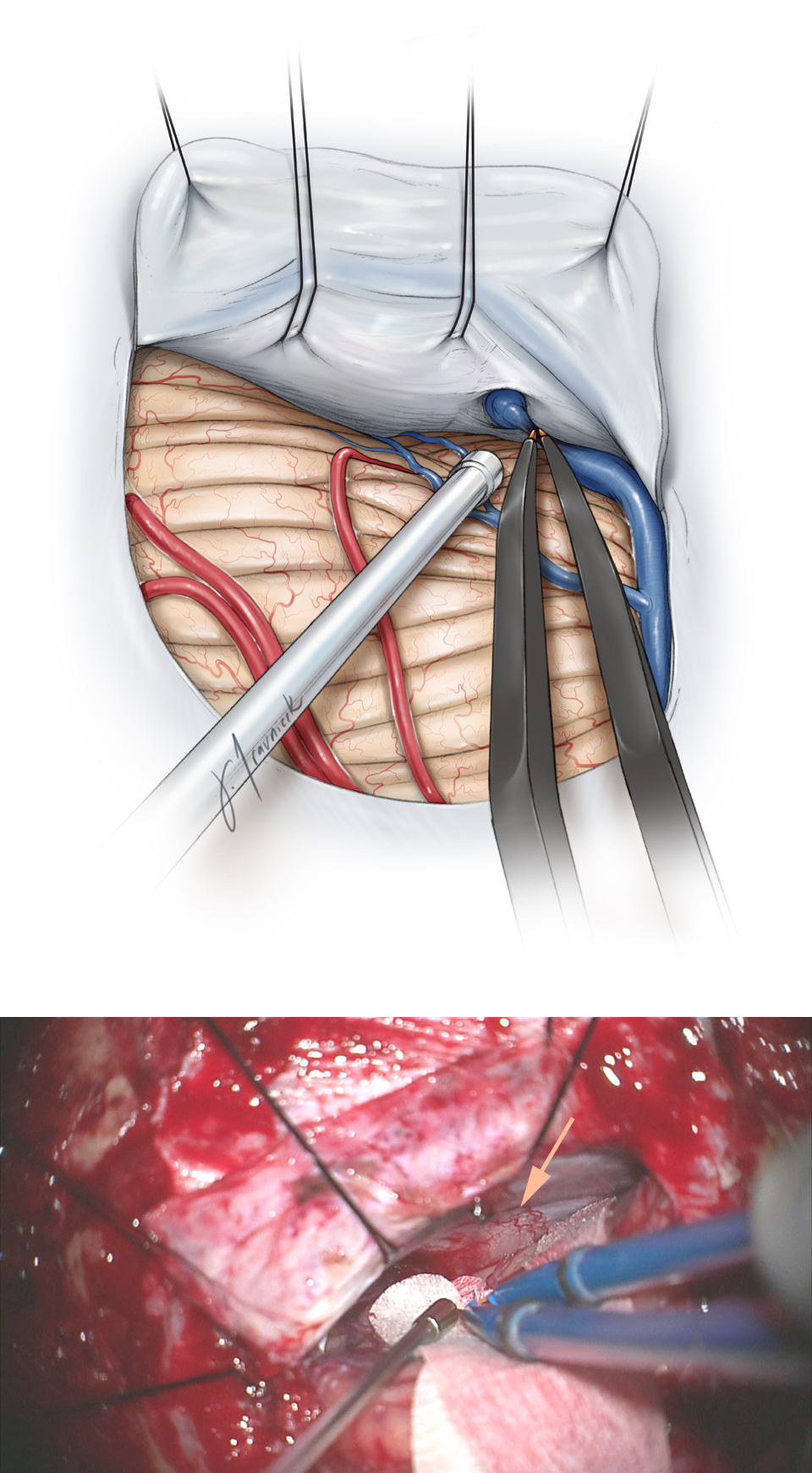 Figure 5: A parasagittal bridging vein may be disconnected for expansion of the supracerebellar corridor (top illustration). The tumor-infiltrated tentorium (arrow) is exposed (bottom photo). 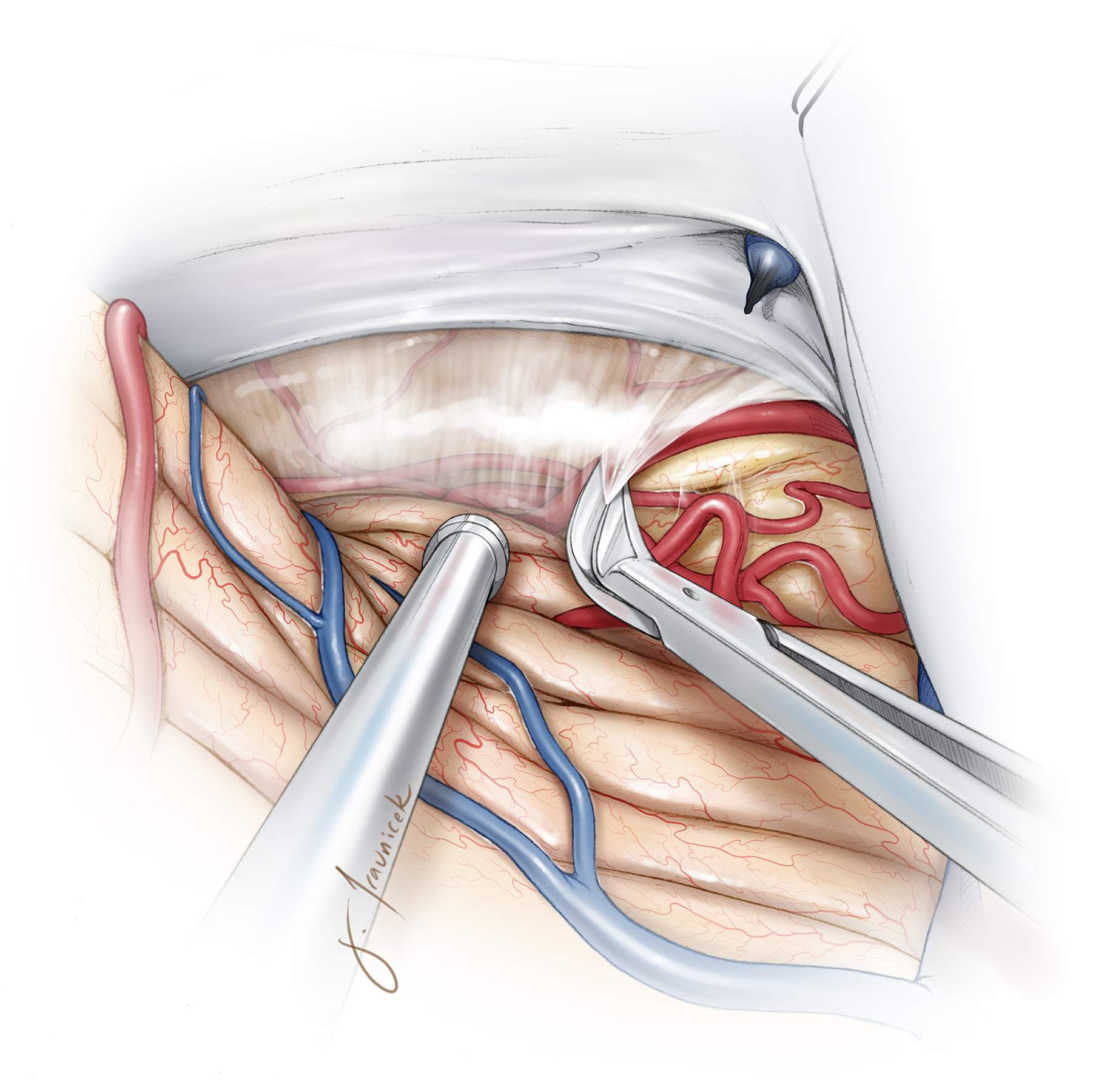 Figure 6: Before the tumor is approached via the tentorial incisions, the neurovascular contents at the incisura are identified via generous arachnoid dissection. Their early exposure can keep them out of harm’s way during the later stages of tumor dissection.

Sharp dissection of the arachnoid bands over the part of the tumor that hangs over the incisura prevents injury to CN IV. 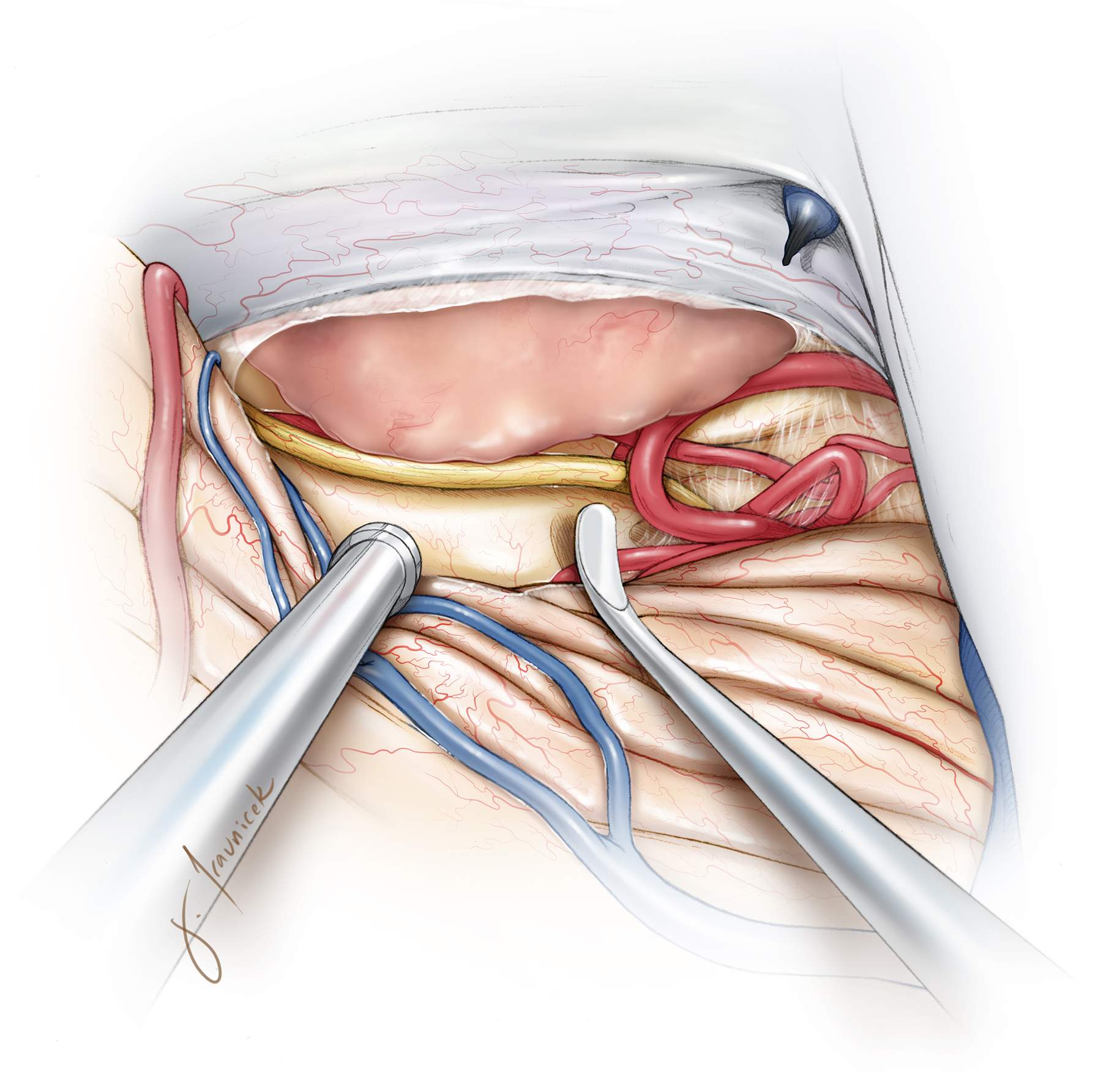 Figure 7: CN IV is identified near the edge of the tentorium. This nerve and the surrounding vascular structures are dissected free. This portion of the tumor may be reduced, if feasible. Early exposure of the dorsolateral brainstem and surrounding neurovascular structures at the tentorial incisura allows for their protection by microdissection away from the tumor before significant tumor debulking is undertaken and the surgical field is obscured by bleeding. 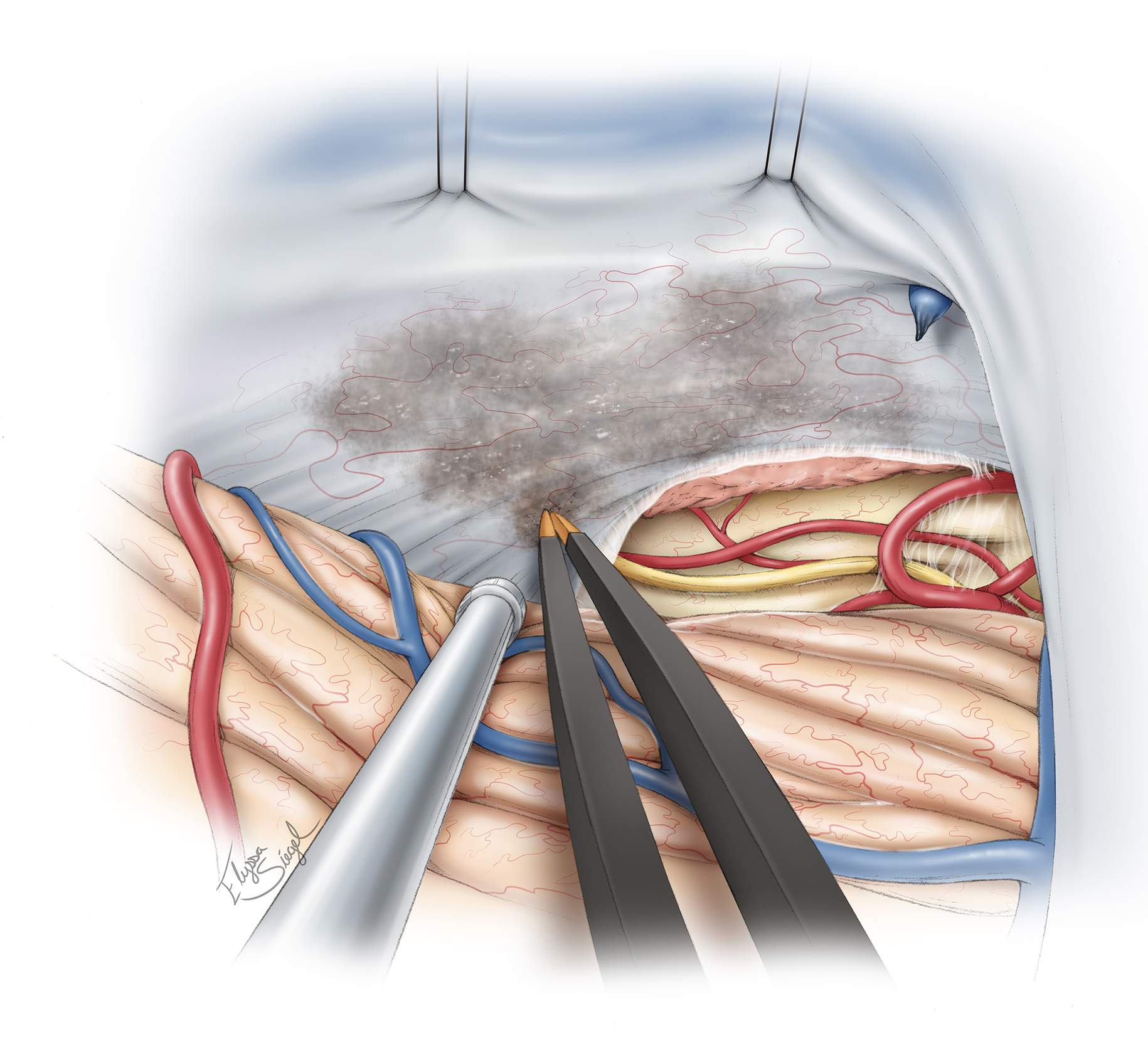 Figure 8: The undersurface of the tentorium is coagulated using bipolar electrocautery. This maneuver devascularizes the tumor and facilitates resection by reducing blood loss and improving the surgeon’s visualization. 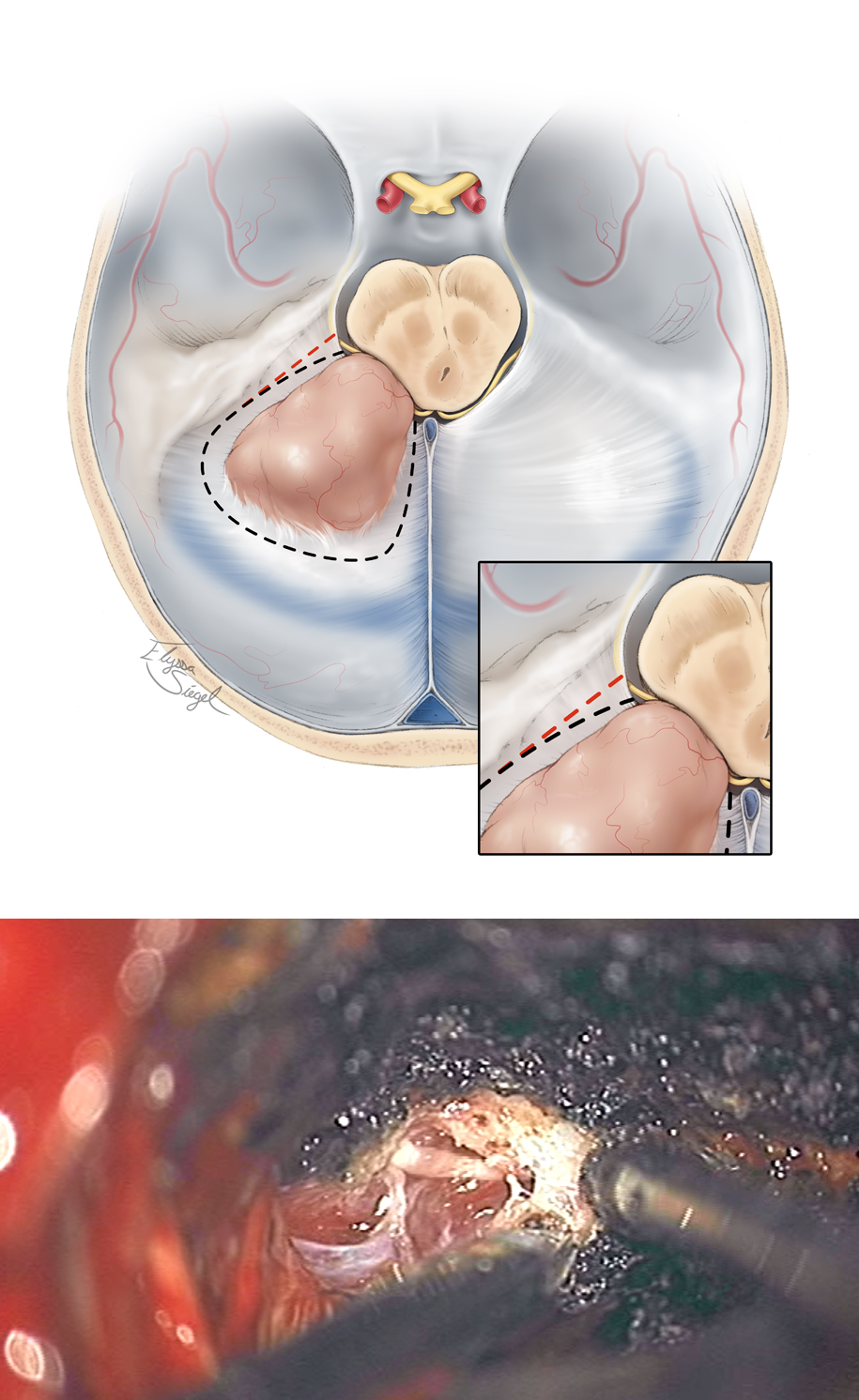 Figure 9: The trochlear nerve must be protected along the lateral edge of the incisura during tentorial transection (upper inset image). Incision along the red hashed line will sacrifice the nerve; incision along the black hashed line is appropriate. Alternatively, a T-shaped incision may be made within the tentorium for intraparenchymal lesions within the posterior basal temporal lobe. An intraoperative photograph during resection of a left-sided petrotentorial meningioma demonstrates the location of the nerve as it enters the dura at the anterior edge of the coagulated tumor and tentorium (lower image). 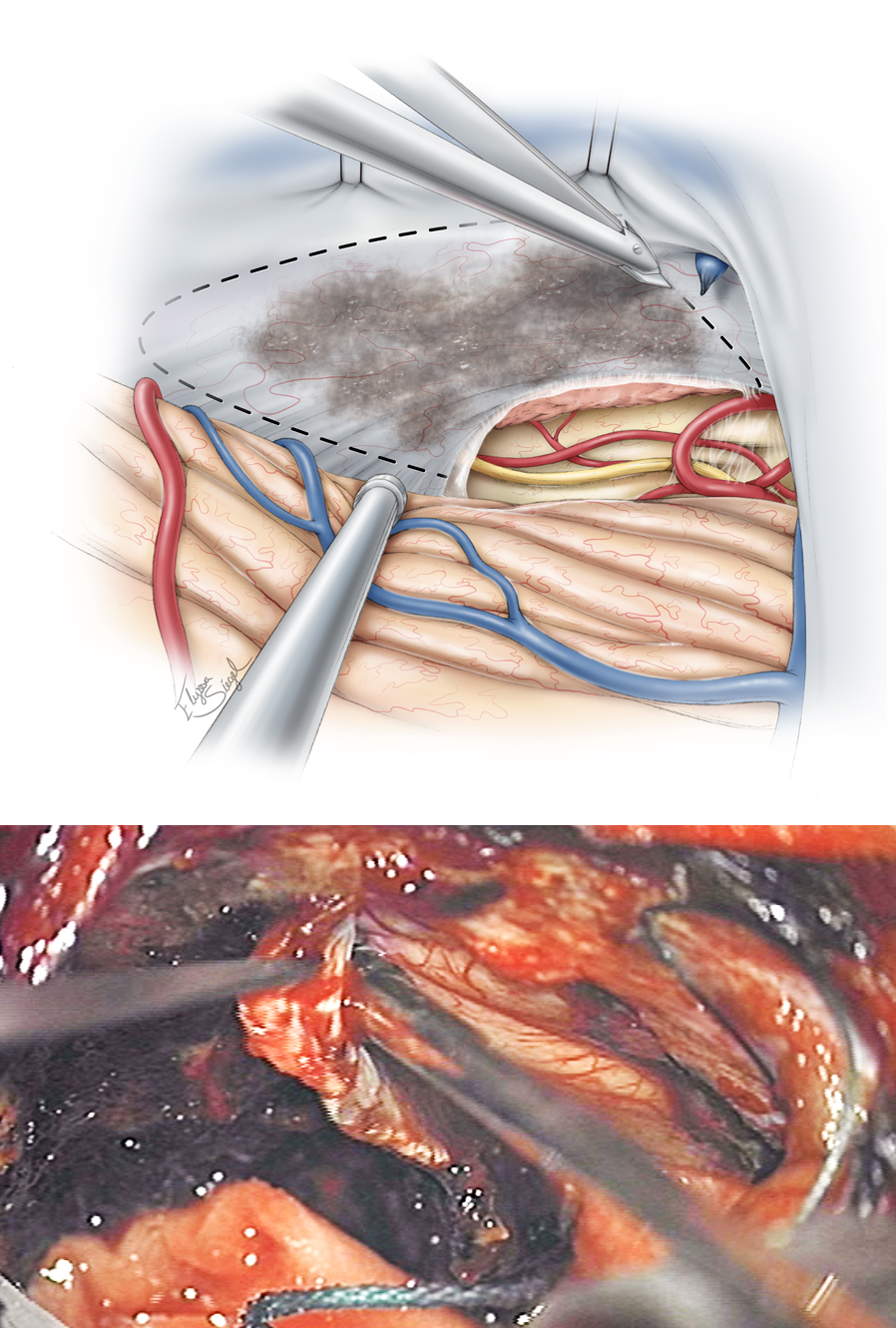 Figure 10: A generous section of the tentorium that contains the base of the tumor and spans the petrous ridge to the midline is incised while the operator identifies and preserves the trochlear nerve along the entire anterior edge of the tentorium. Occasional bridging veins draining the occipital lobe and entering the superior aspect of the tentorium may be sacrificed. The medial tentorial cut should preserve the straight sinus and its tributaries. Venous lakes may be present, and venous bleeding through the leaflets of the tentorium should be controlled using thrombin-soaked Gelfoam packing. Bipolar cauterization will exacerbate the bleeding by shrinking and tearing the tentorial edges.

Sectioning of the tentorium as described above will further devascularize the tumor and furnish a relatively bloodless field to debulk the tumor and microsurgically mobilize it from the surrounding cortex. 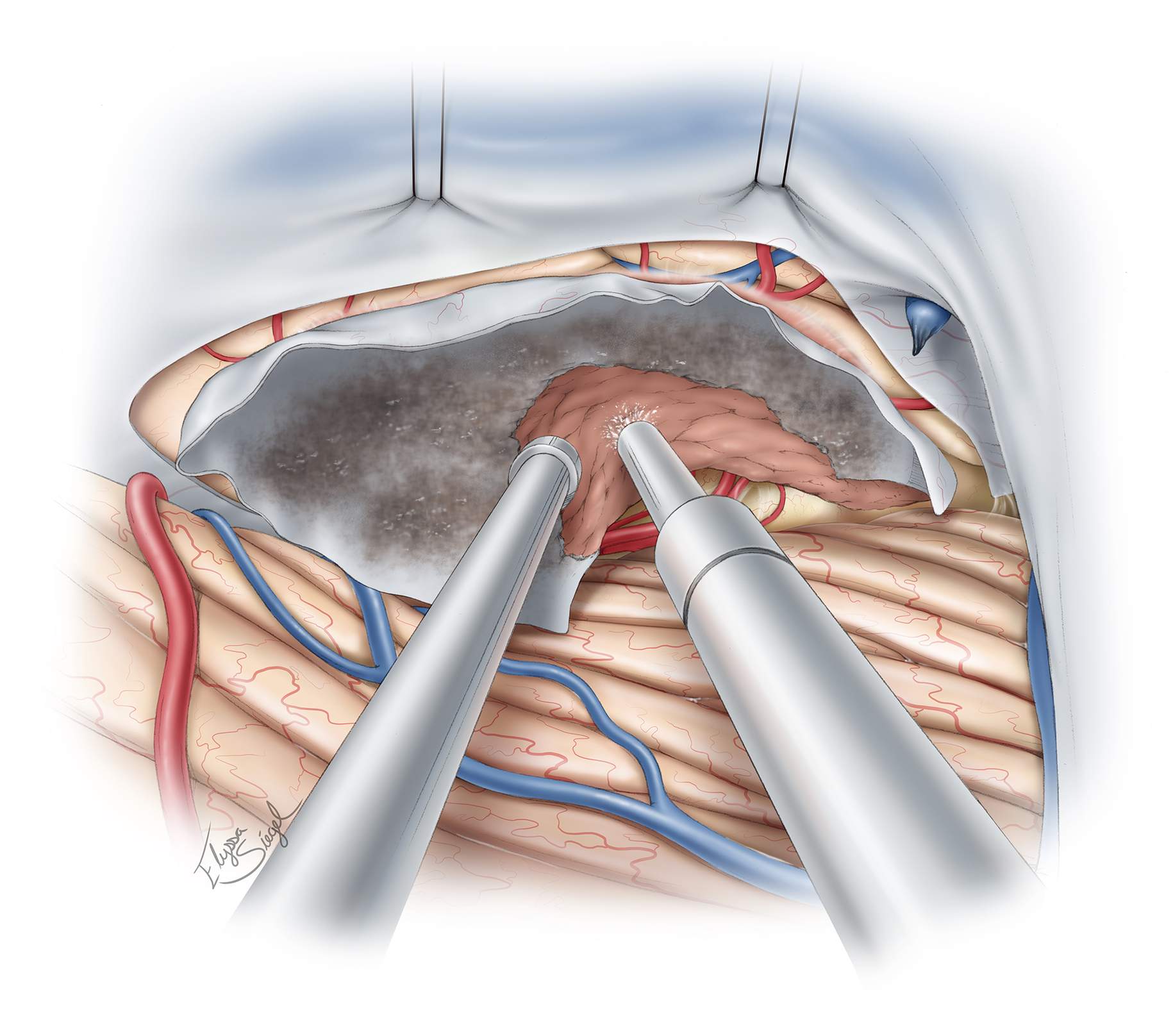 Figure 11: Following division of the tentorium, the tumor is internally debulked using the suction device, along with coagulation for soft tumors or the ultrasonic aspirator for fibrous tumors. The process of intracapsular enucleation should not inadvertently violate the tumor capsule within the operative blind spot. 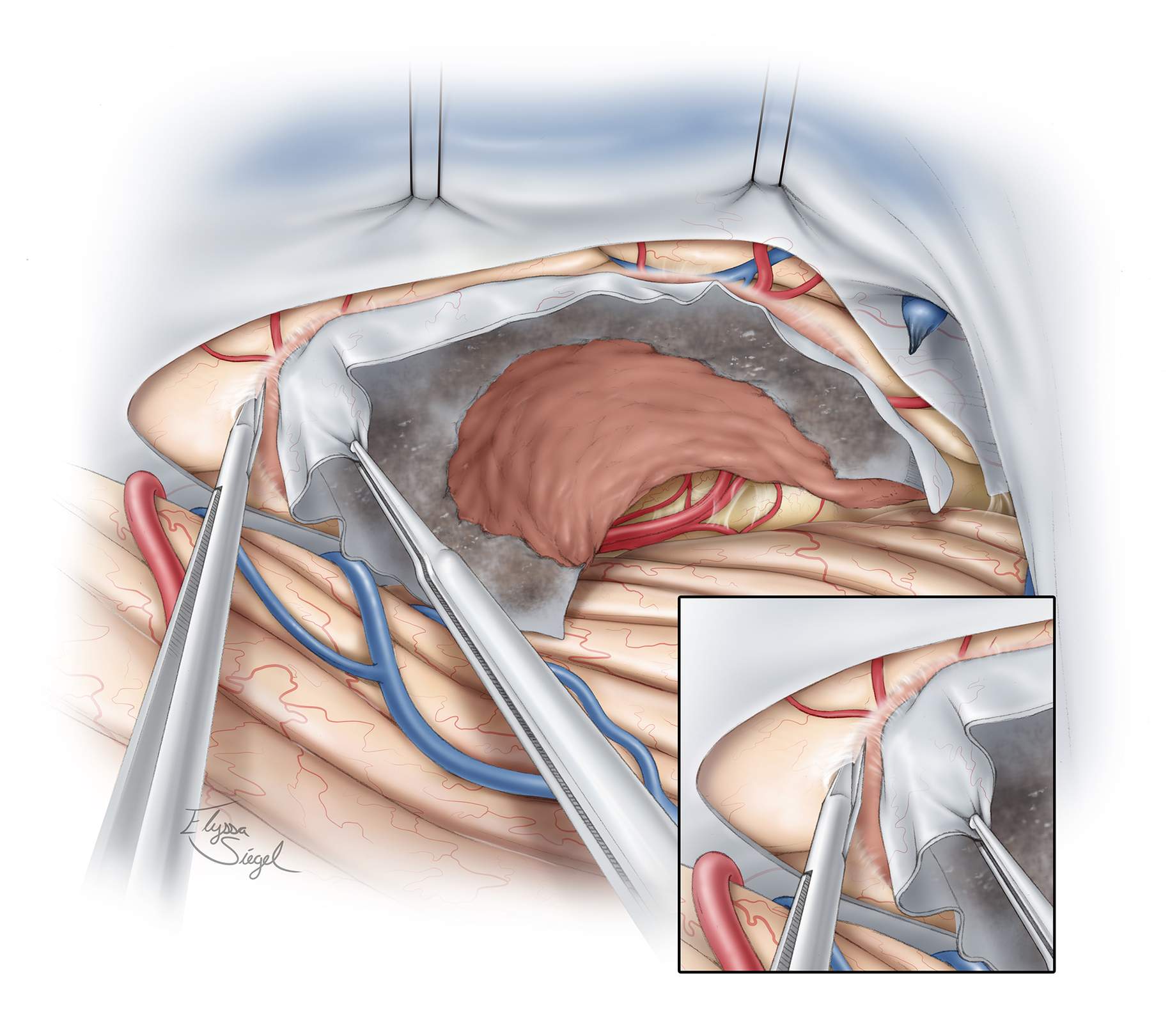 Figure 12: After the tumor is sufficiently debulked, the tumor capsule is dissected from the surrounding structures, including the posterior basal temporal and the basal occipital lobes. The en passage posterior cerebral artery branches are preserved. 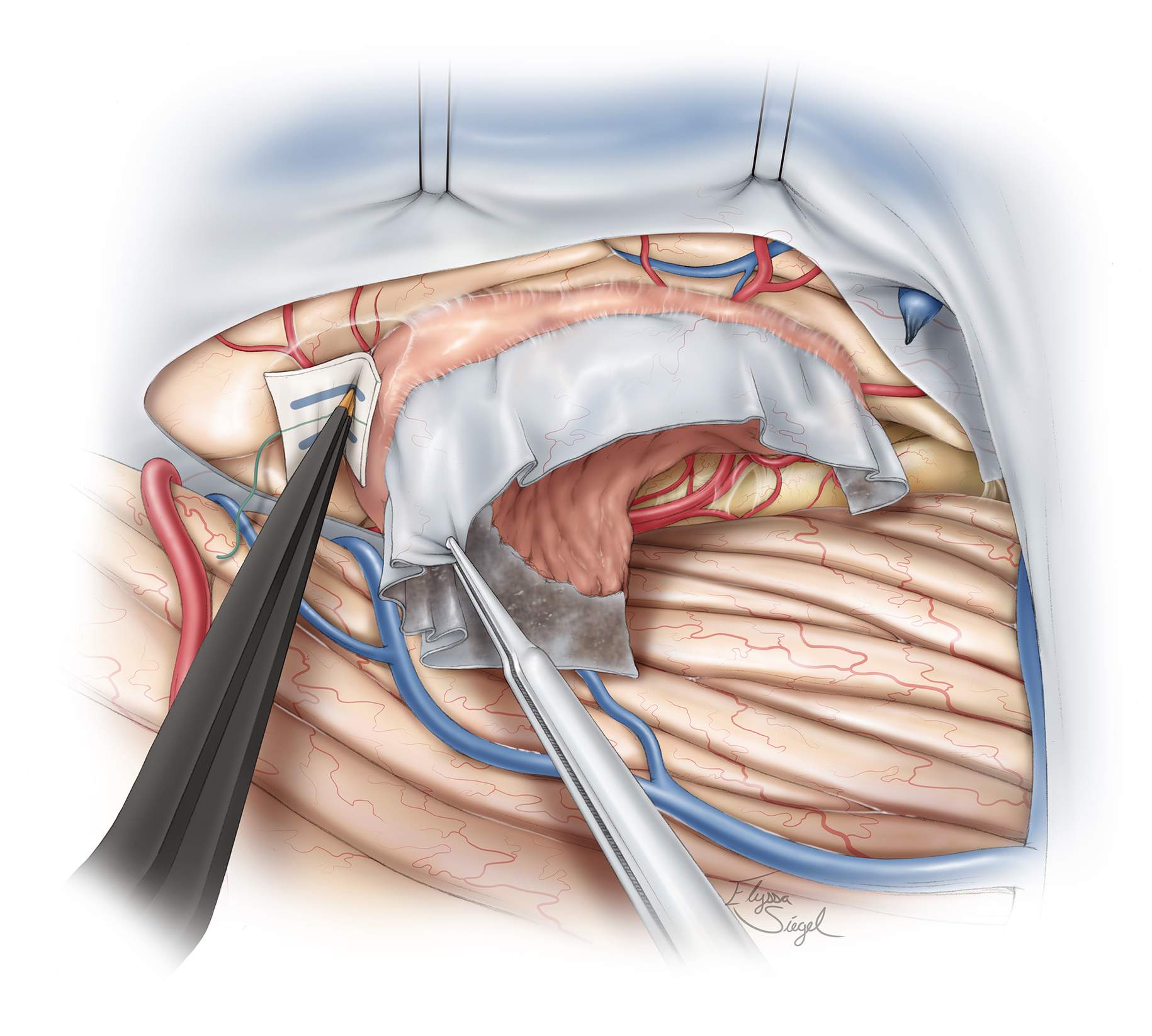 Figure 13: Small cottonoid patties are used to mobilize the tumor away from the areas where the pia is disrupted. This maneuver is similar to that used for convexity meningiomas. The transtentorial route essentially transforms the medial tentorial tumor into a mass situated over the lateral convexity of the cerebrum. 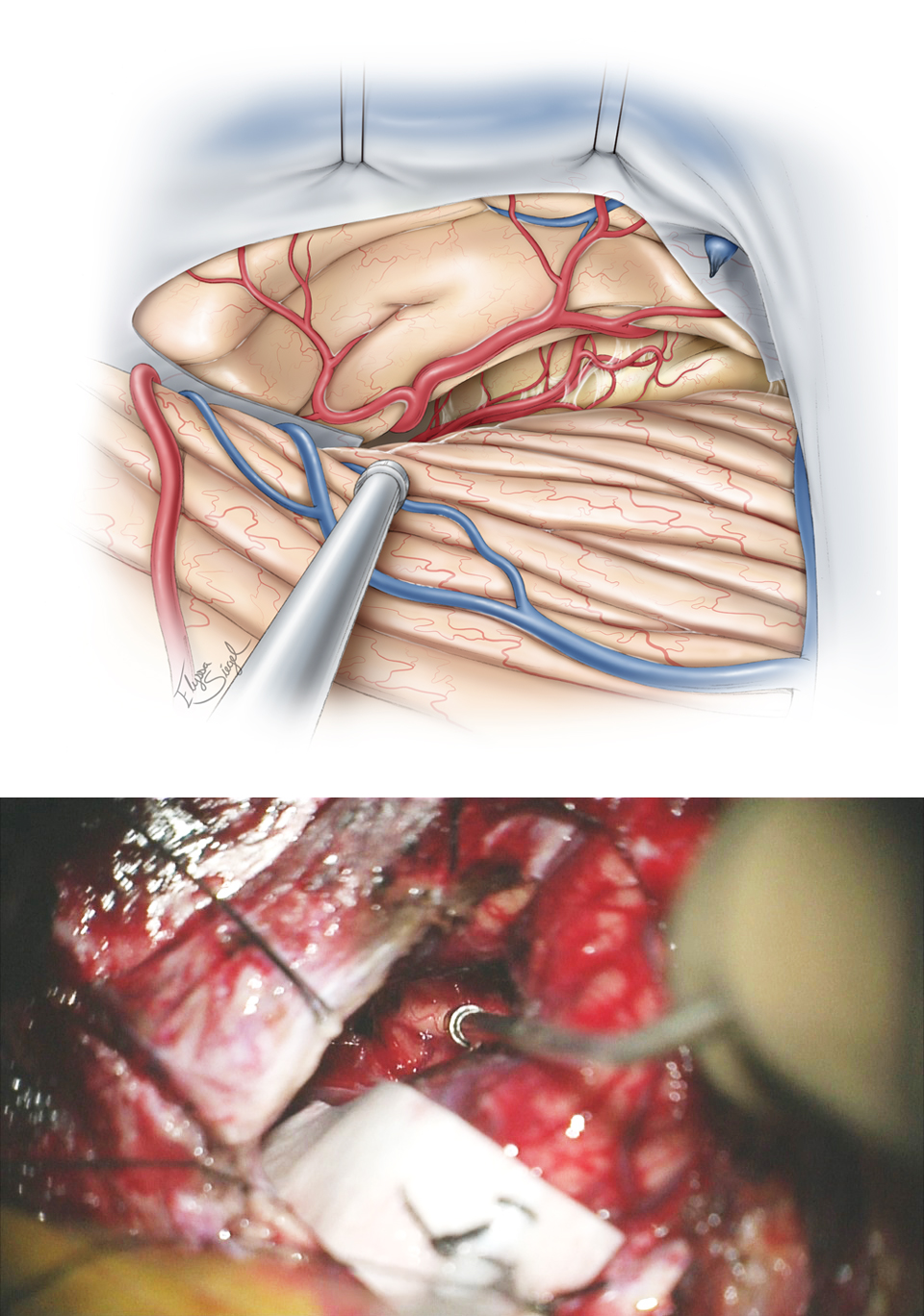 Figure 14: The transtentorial route creates a wide corridor to the basal occipital and posteromedial basal temporal regions. Removal of the tumor and the affected tentorium ensures a Simpson grade 1 resection with a favorable low recurrence rate. An intraaxial tumor in this region may be similarly resected. 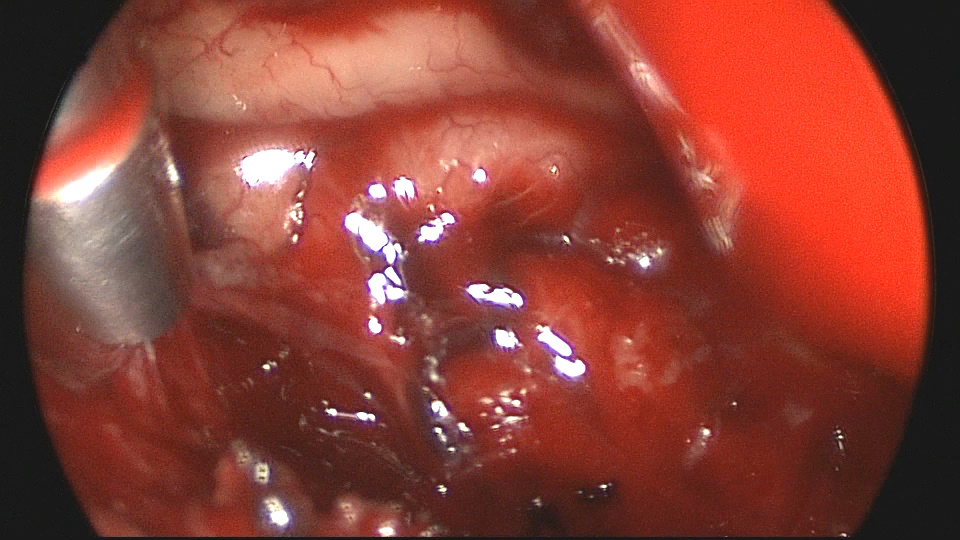 Figure 15: Endoscopy may be used to investigate the resection cavity and ensure gross total removal of the tumor within the operative blind spot, especially medial to the posterior falx and around the straight sinus. The region over the petrous apex is also thoroughly inspected using angled endoscopes.

The resected portion of the tentorium is not reconstructed. The dura is closed in a watertight fashion. The lumbar drain catheter is removed at the end of the procedure.

Patients are typically observed in the intensive care unit overnight. The steroid dosage is tapered off within 1 week, depending on the extent of cerebral edema and the patient’s neurologic status.

Follow-up MR imaging is obtained within 48 hours of surgery as a baseline for future comparison to detect tumor recurrence. The findings on the imaging can be an important source of learning for the surgeon to direct more effective resection for the future patients.