The posterior interhemispheric craniotomy provides access to deep midline parafalcine and paraventricular spaces through the natural interhemispheric fissure. Although working in this natural plane has numerous benefits, such as a minimal need for brain retraction and transgression, the working corridor can be deep and narrow, making surgery in this region technically challenging.

The reach to expose the peritrigonal/atrial territories poses special challenges. The highly functional overlying cortices and white matter tracts such as the optic radiations lateral to the ventricle, postcentral gyrus laterally and more superficially, and the thalamus anteroinferiorly, constrain the surgical corridors to the atrium. Standard interhemispheric or transcortical approaches involve significant retraction and resection of the normal parenchyma. 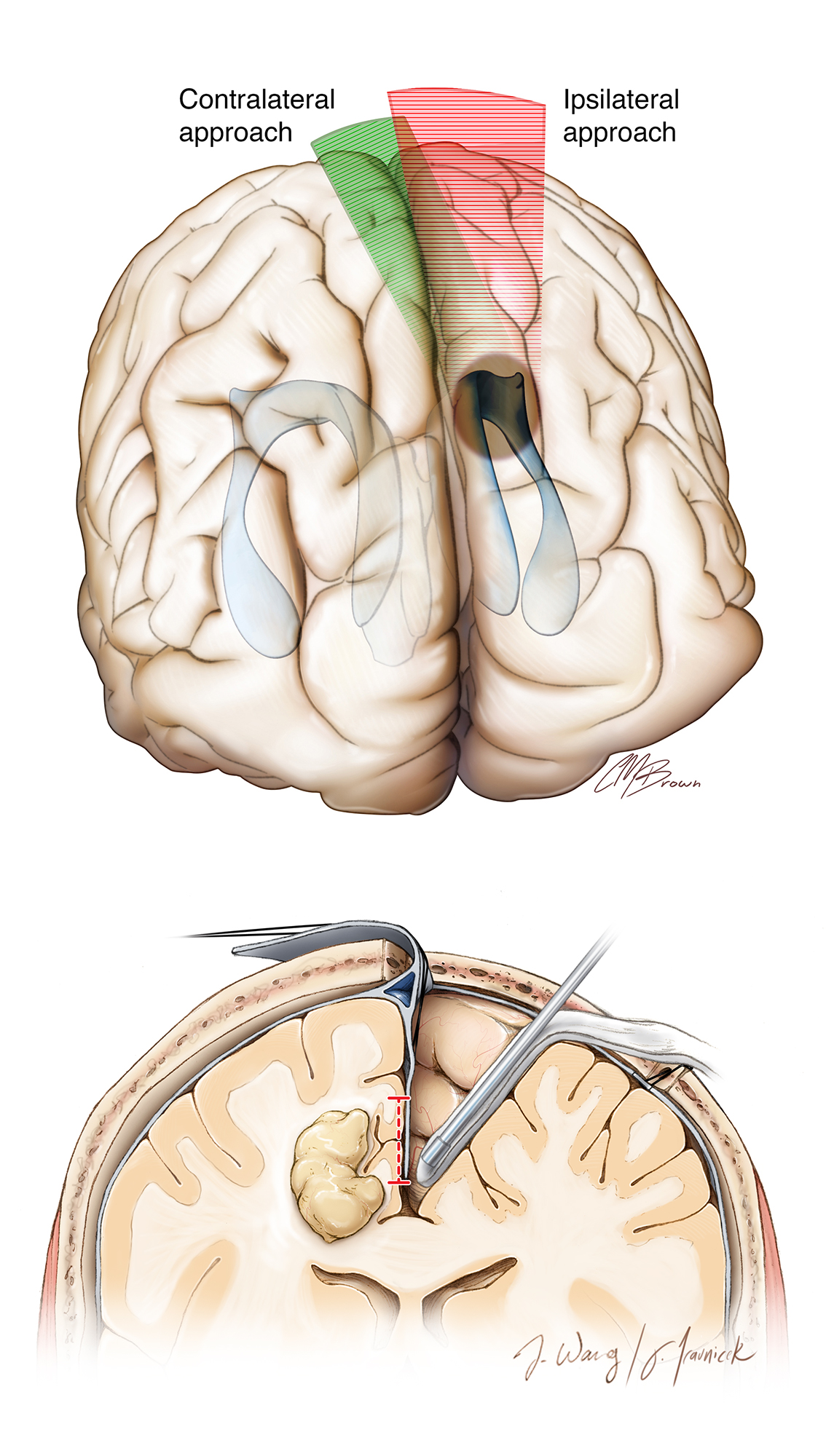 Figure 1: The contralateral transfalcine cross-court corridor (green zone) affords more flexible working angles for lesions that extend laterally. This modification of the ipsilateral interhemispheric route reduces retraction on the ipsilateral hemisphere (red zone) while reaching the lateral pole of the tumor (top). An overview of the technical details for this modifed route is described in the second illustration (bottom). 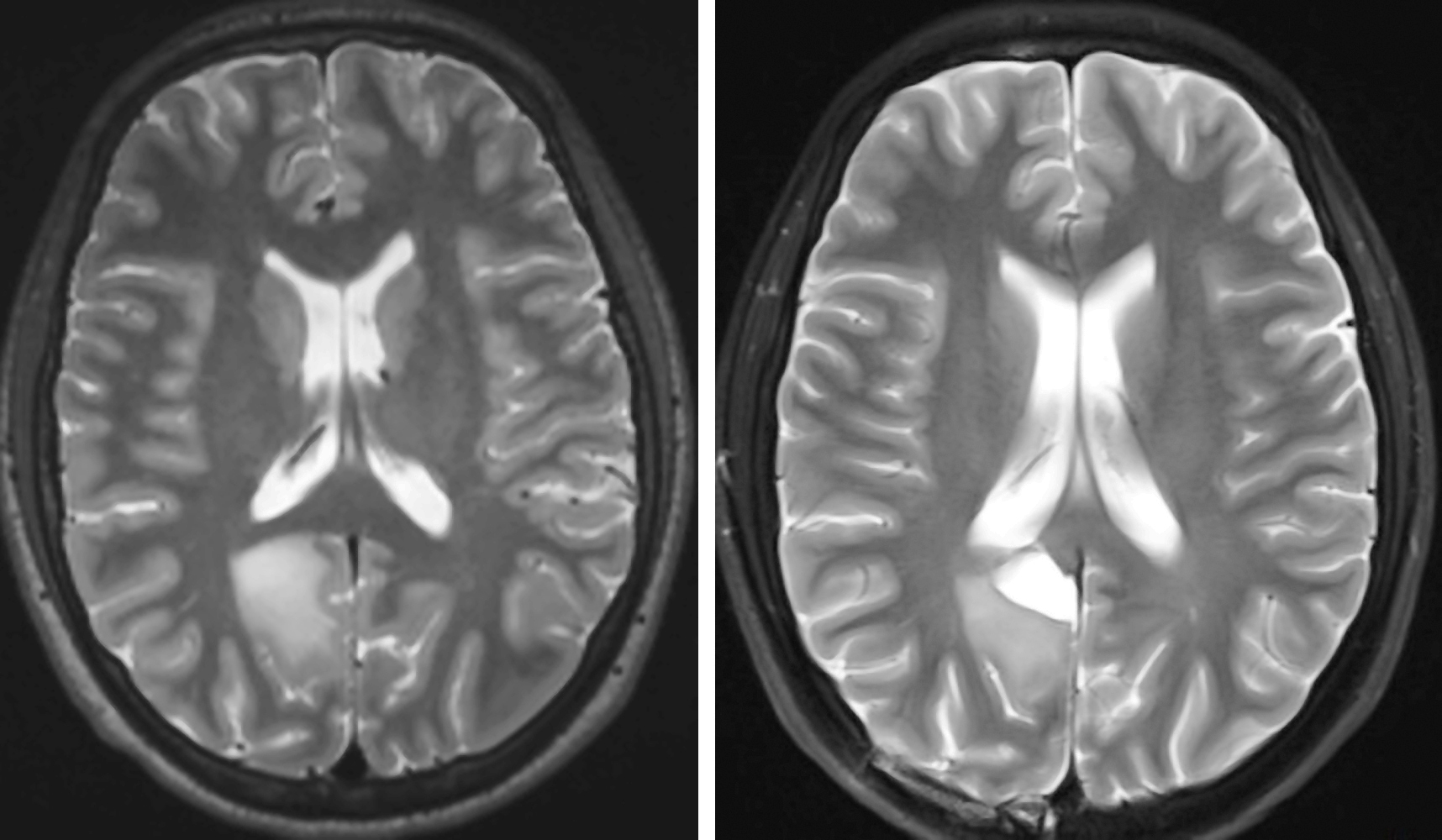 Figure 2: Early in my career, I approached this low-grade glioma of the medial atrial wall through the ipsilateral interhemispheric route. Due to the limited working angle along the lateral pole of the tumor, I achieved only a subtotal resection. The PITTA evolved from my critical review of the experience in this case.

In this chapter, I will highlight the nuances of the PITTA for resection of the lesions affecting the atrium and its medial wall through optimizing the interhemispheric contralateral approach.

I use PITTA to approach tumors and vascular lesions confined to the medial wall of the atrium and within the trigone of the ventricle. 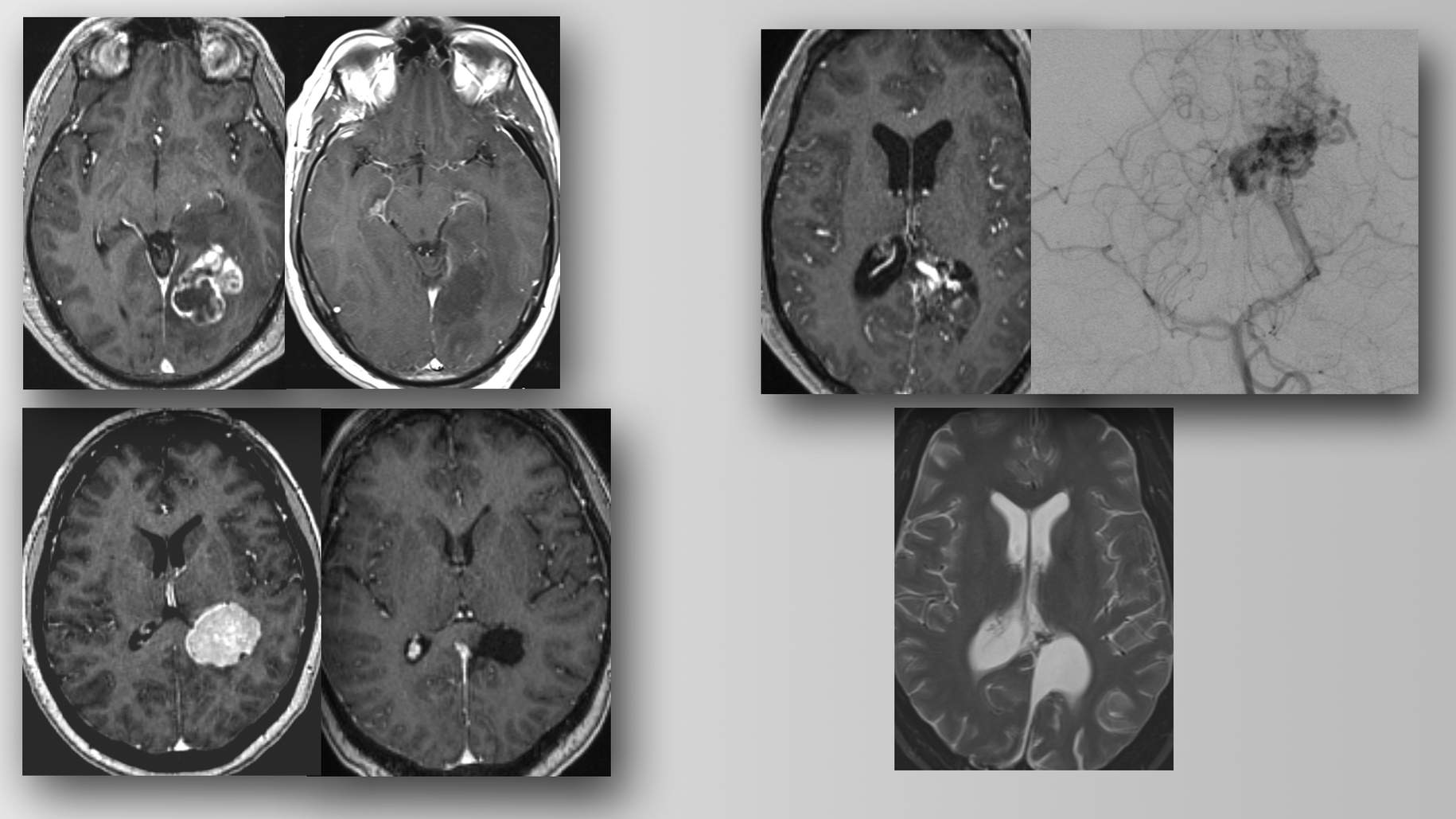 Tumors that extend anteriorly into the diencephalon from the periatrial region or predominantly involve the lateral wall of the atrium are not reasonable candidates for this route.

Intraoperative cerebrospinal fluid (CSF) drainage facilitates brain relaxation and expands the interhemispheric corridor because the CSF cisterns are not accessed during the PITTA. This maneuver obviates the need for fixed retractors on the normal hemisphere. A lumbar drain is my method of choice for this purpose. Approximately 50-60 cc of CSF is gradually (in 10-15 cc aliquots) removed through the lumbar drain during the craniotomy and after the dural opening.

The superior sagittal sinus and corresponding bridging veins over the superior parietal lobule should be evaluated on preoperative magnetic resonance images, and if necessary, a magnetic resonance venogram (MRV) or computed tomography angiogram (CTA) should be performed. The parasagittal bridging veins are often sparse in this region. However, the risk of significant venous infarction with ligation of any large vein persists.

Exposure of the posterior aspect of the atrium requires an incision within the flax that can be close to the straight sinus. Therefore, preoperative evaluation of this vital dural venous sinus is also important on imaging.

If there are numerous large parasagittal veins draining into the sagittal sinus overlying the contralateral hemisphere in the region, it would be ill-advised to use the PITTA and ligate these veins; instead, a transcortical approach through the superior parietal lobule is warranted.

An understanding of the parasagittal venous anatomy is important for execution of this approach. 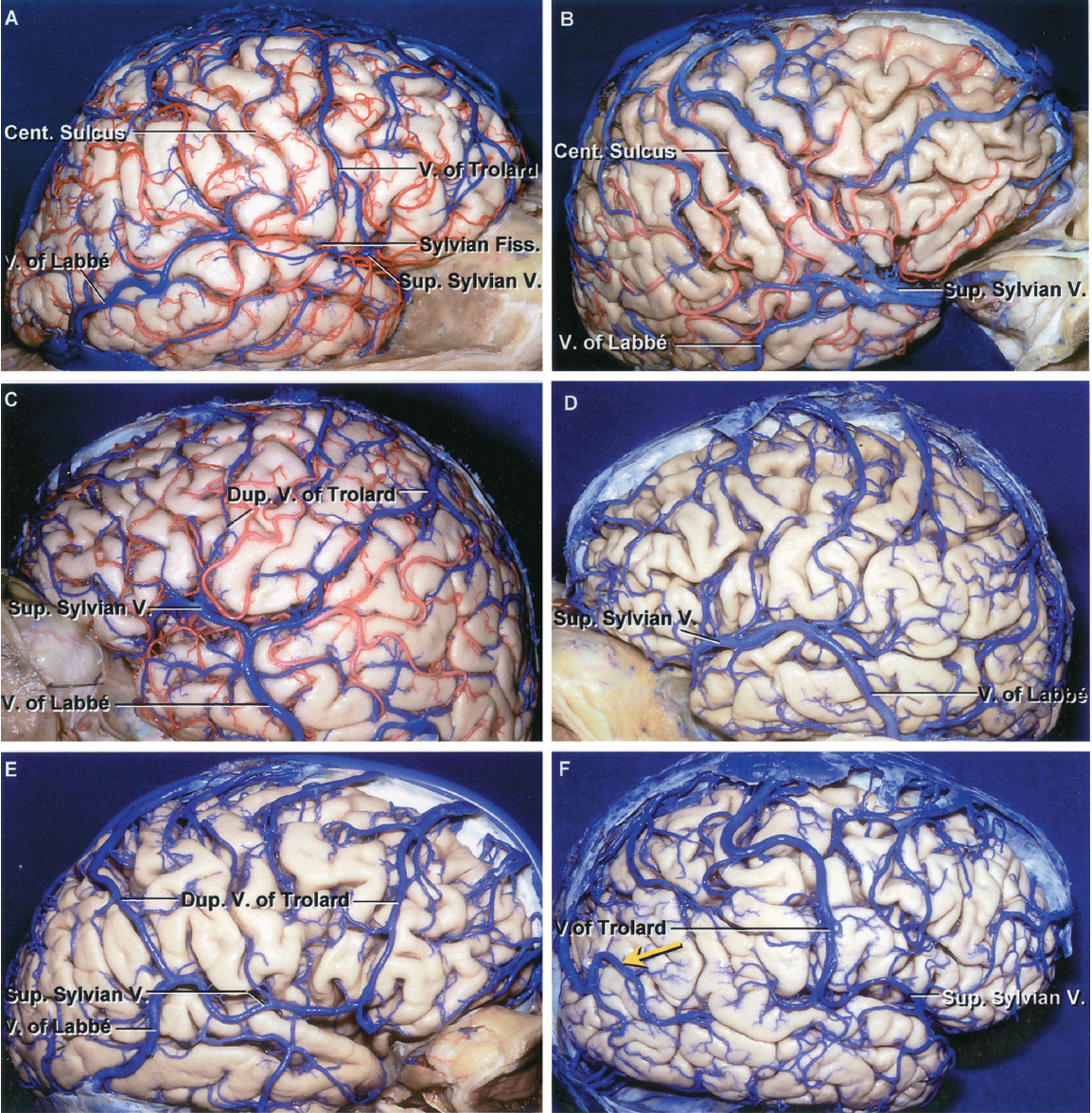 Figure 4: The venous anatomy and its variations around the superior parietal lobule. Although the parasagittal veins are frequently sparse in this location, there are hemispheres where the non-dispensable duplicate forms of vein of Trolard are present (E). In addition, there are often large veins just anterior and posterior to the superior parietal lobule region, especially in the absence of the vein of Labbe (yellow arrow, F)(Images courtesy of AL Rhoton, Jr). 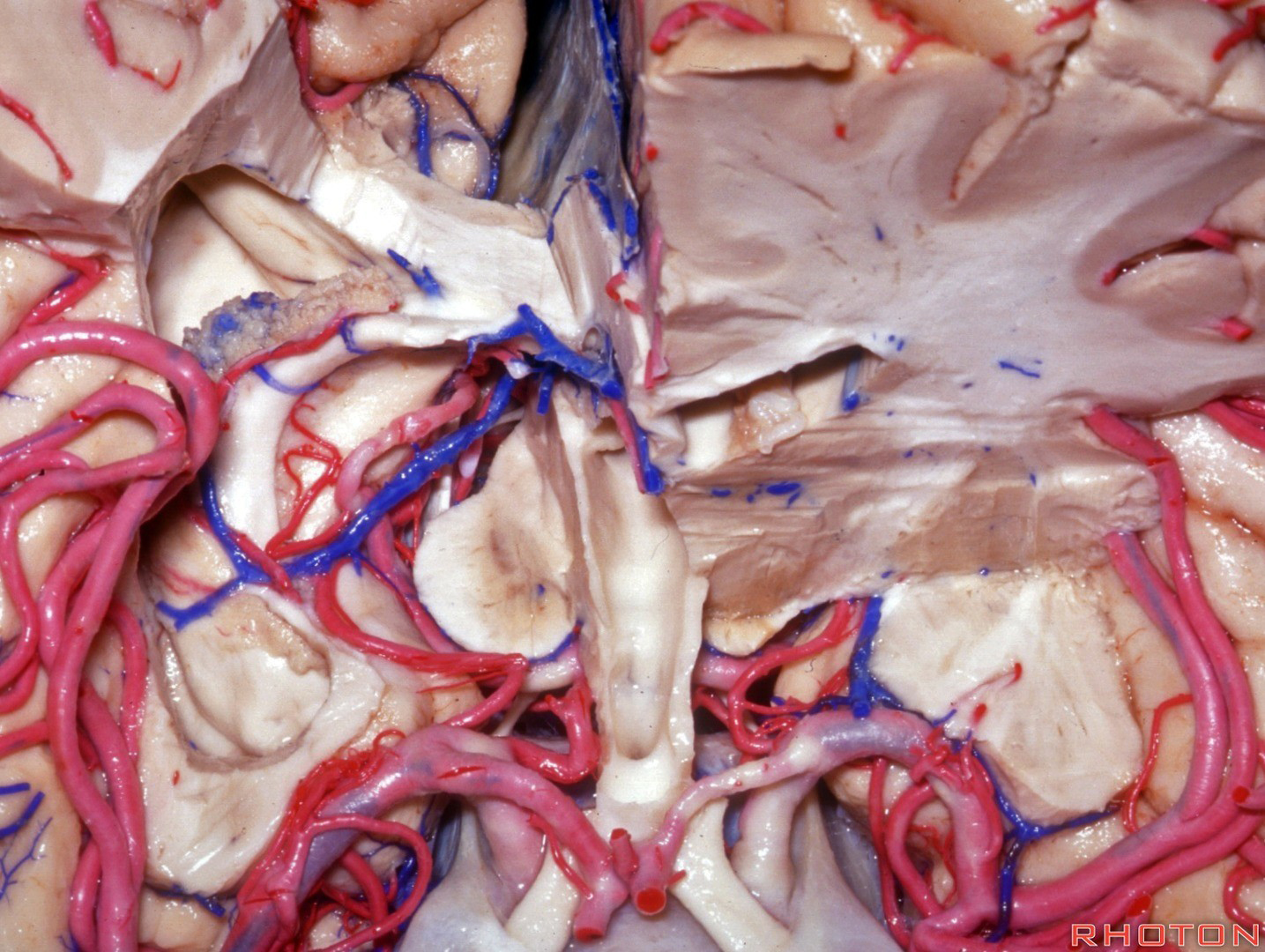 Figure 5: A view of the coronal section to the atrium through the interhemispheric fissure. A portion of the right parietal lobe is removed (Image courtesy of AL Rhoton, Jr). 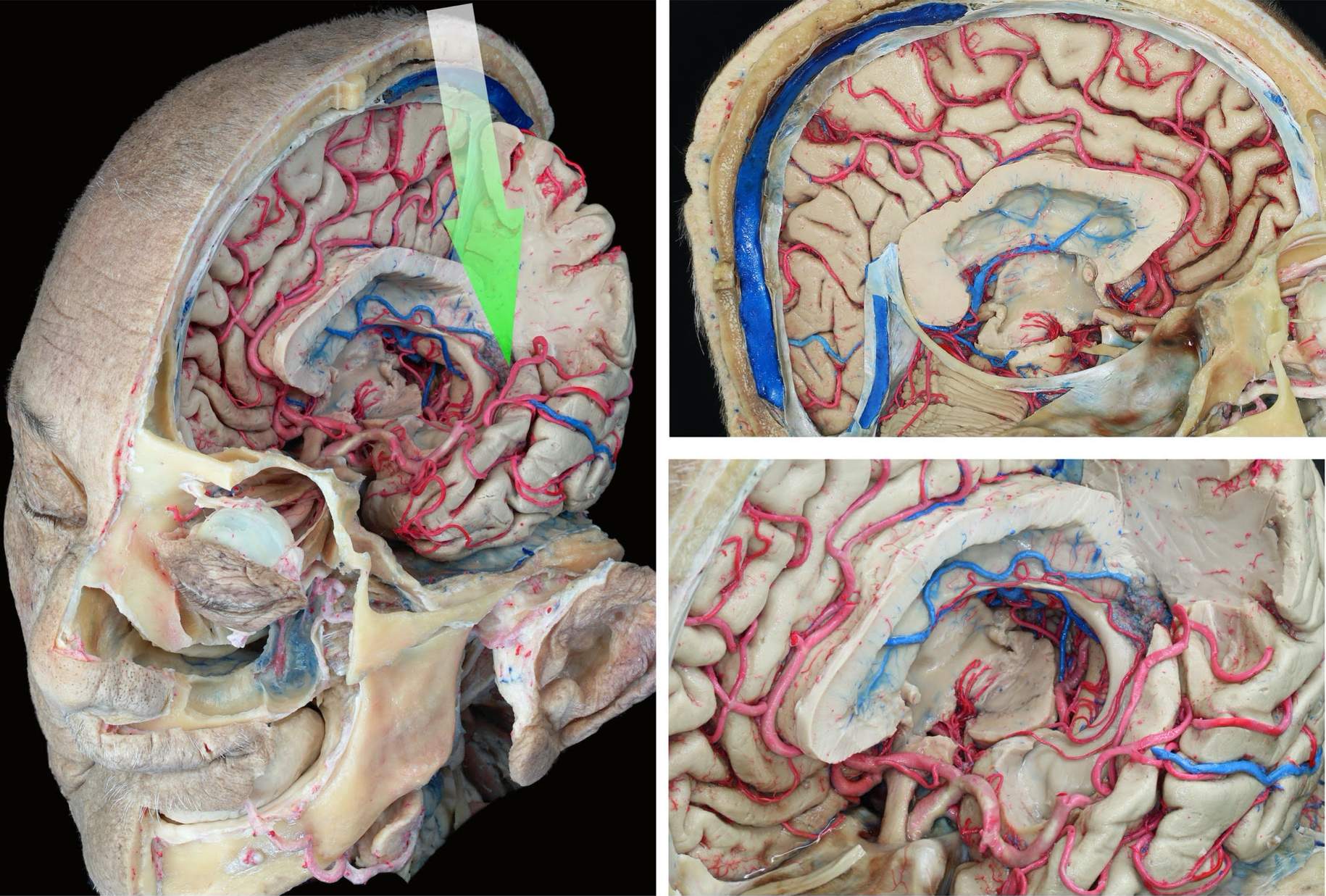 Figure 6: The route of the surgery and anatomical relationships for this route are demonstrated. Aggressive manipulation and/or coagulation of the choroid plexus can lead to ischemic lesions and dense visual field deficits (Images courtesy of Juan Carlos Fernandez-Miranda). 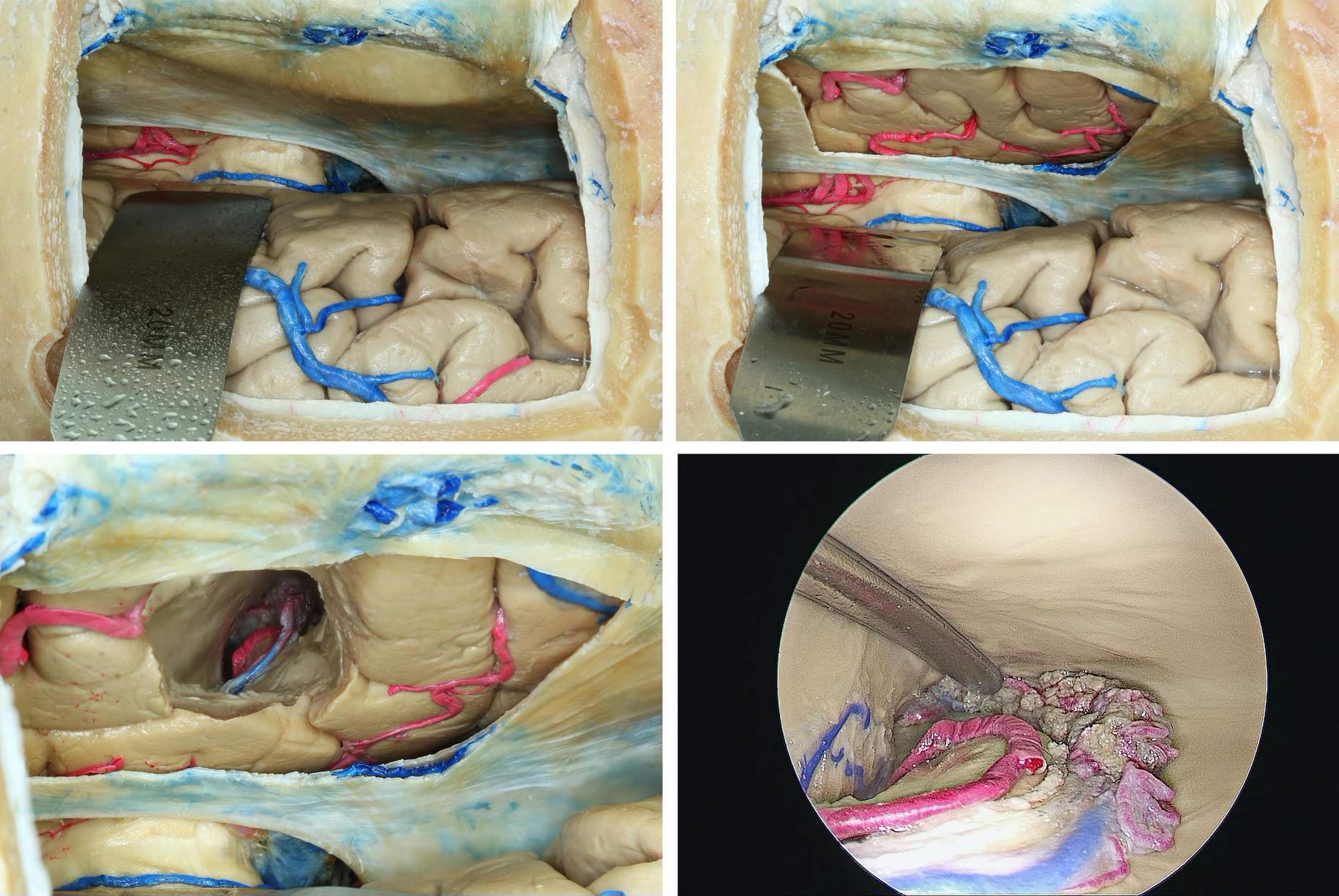 Figure 7: The operative view of this approach and exposure into the atrium are shown. The endoscopic view through the atrium (right lower image) demonstrates the anatomy of the atrium and the feeding choroidal arteries. This approach provides early control of the feeding arteries to the lesions in this region (Images courtesy of Juan Carlos Fernandez-Miranda).

Figure 8: The patient is placed in the park-bench position with the normal unaffected hemisphere in the dependent position. This maneuver allows gravity retraction to mobilize the dependent (contralateral) hemisphere away from the midline. Navigation is used for planning the incision and craniotomy to avoid parasagittal veins as well as designing the falcine incisions and precuneus corticotomy.

The incision is typically linear and just behind the parietal bossing (right image). Note the interhemispheric operative corridor is situated between two important bridging veins. The patient’s head is rotated so that the axis of the midline (sagittal suture) is at a 45-degree angle to the floor.

Figure 9: The craniotomy exposes the width of the superior sagittal sinus. The dural opening should be adjusted to preserve the parasagittal veins (right image, inset). These veins are untethered in order to increase the working zone through the interhemispheric corridor (right image). Figure 10: Two retention sutures are placed into the superior aspect of the falx to facilitate gentle dural sinus retraction and mobilization away from the midline. This maneuver is pertinent in expanding the interhemispheric corridor. Note the piece of Telfa covering and protecting the normal hemisphere. 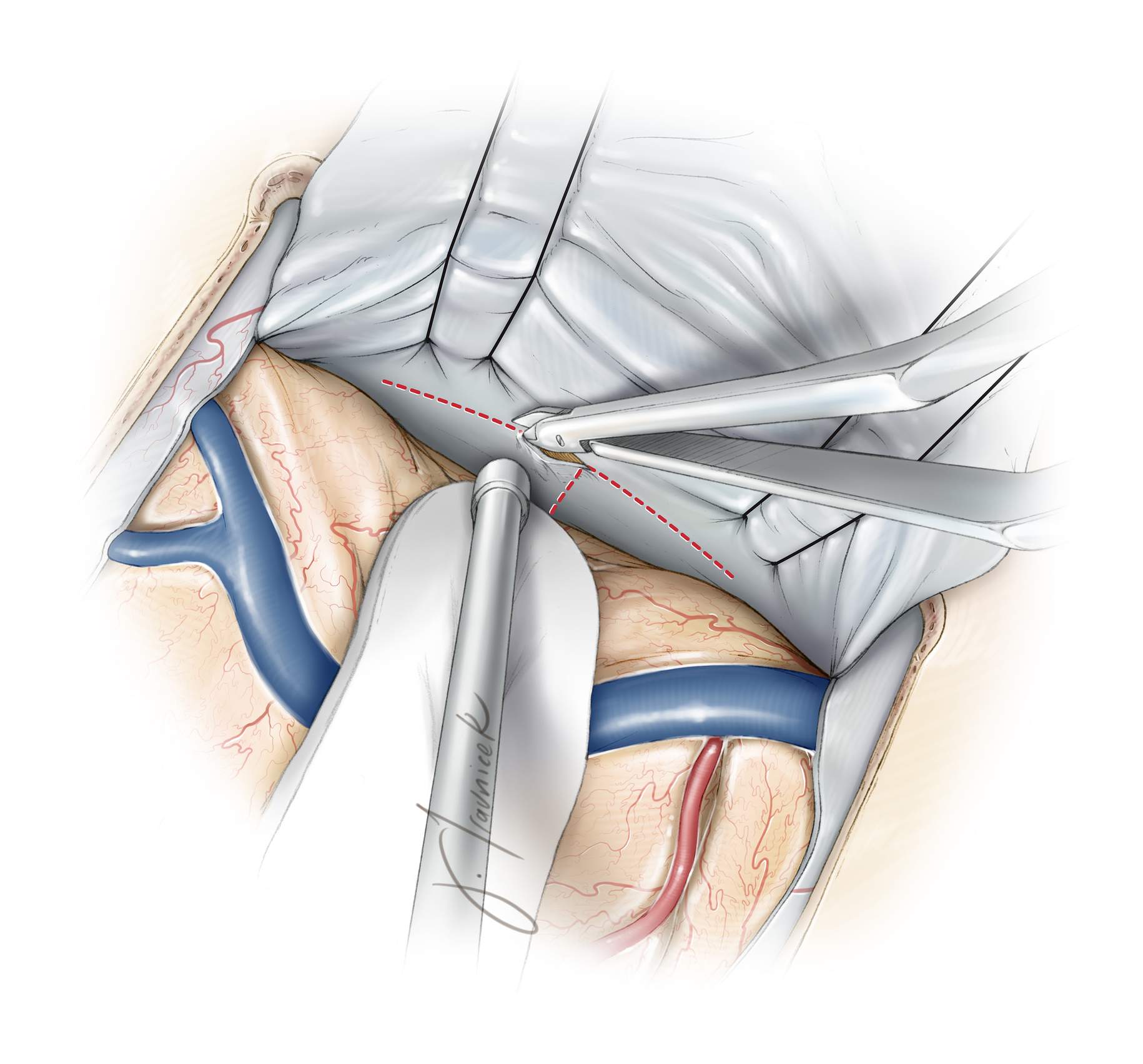 Figure 11: The “T” incision within the falx cerebri exposes the contralateral medial hemisphere (precuneus). Lumbar CSF drainage is crucial for mobilizing the unaffected hemisphere and minimizing its retraction injury. The lower limb of the incision is extended to the level of the corpus callosum and the inferior sagittal sinus is coagulated and transected. The straight sinus and other relevant deep draining veins are localized and protected using neuronavigation.

If the vertical incision within the falx approaches the straight sinus, this vertical incision is completed in an oblique fashion from the posterior to anterior direction. Using this methodology, as the falcine flaps are reflected, the more posterior regions of the precuneus are generously exposed. 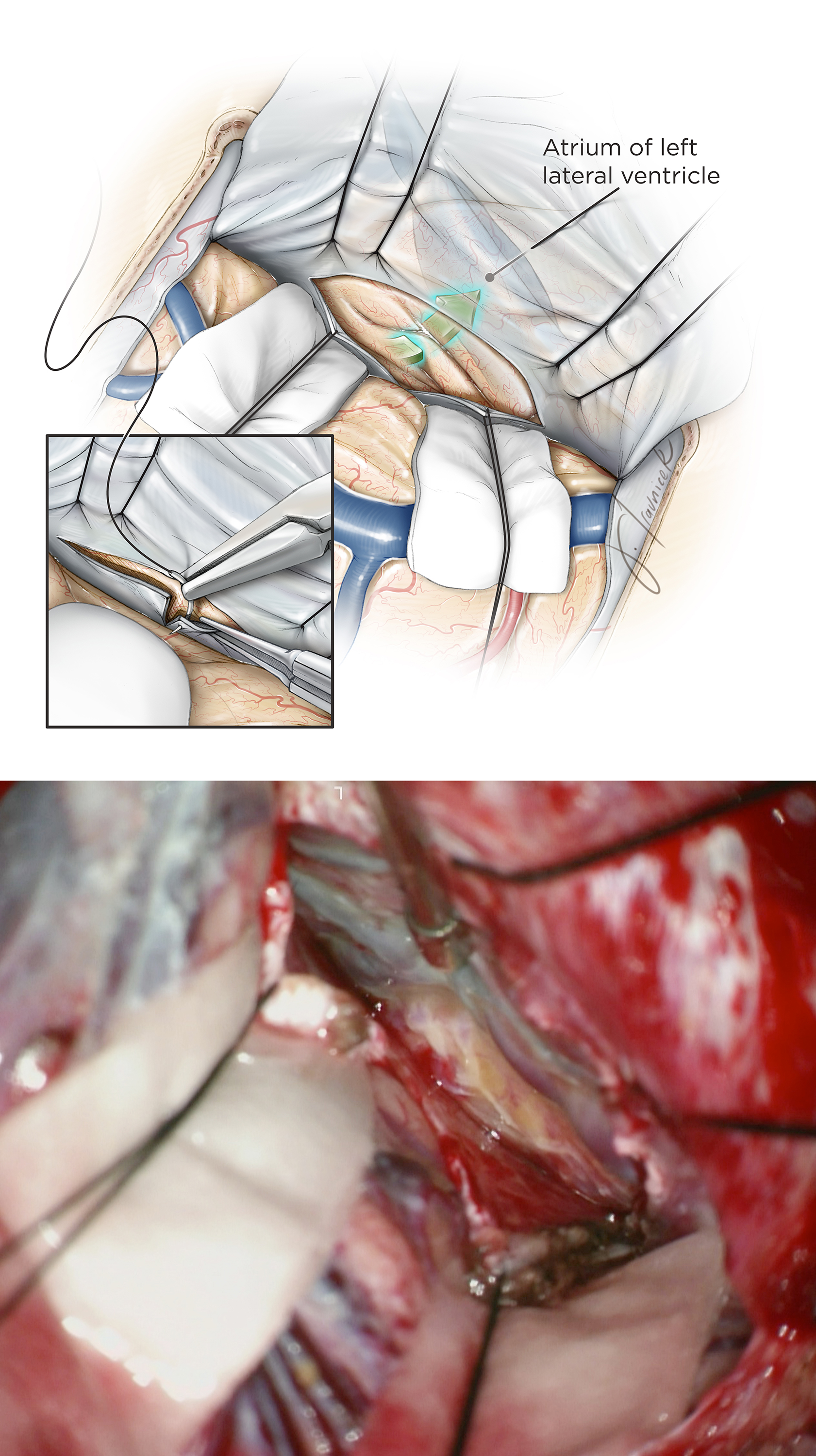 Figure 12: Additional sutures are placed on the falcine dural flaps (inset image) to mobilize the contralateral (to the lesion) hemisphere and increase the transfalcine working angle toward the ipsilateral atrium (upper image). Corresponding intraoperative image for exposing the left precuneus (at the tip of suction apparatus) is included (lower image). Cottonoid patties protect the contralateral unaffected hemisphere against the gentle retraction vector of the sutures. Fixed retractors are not used. 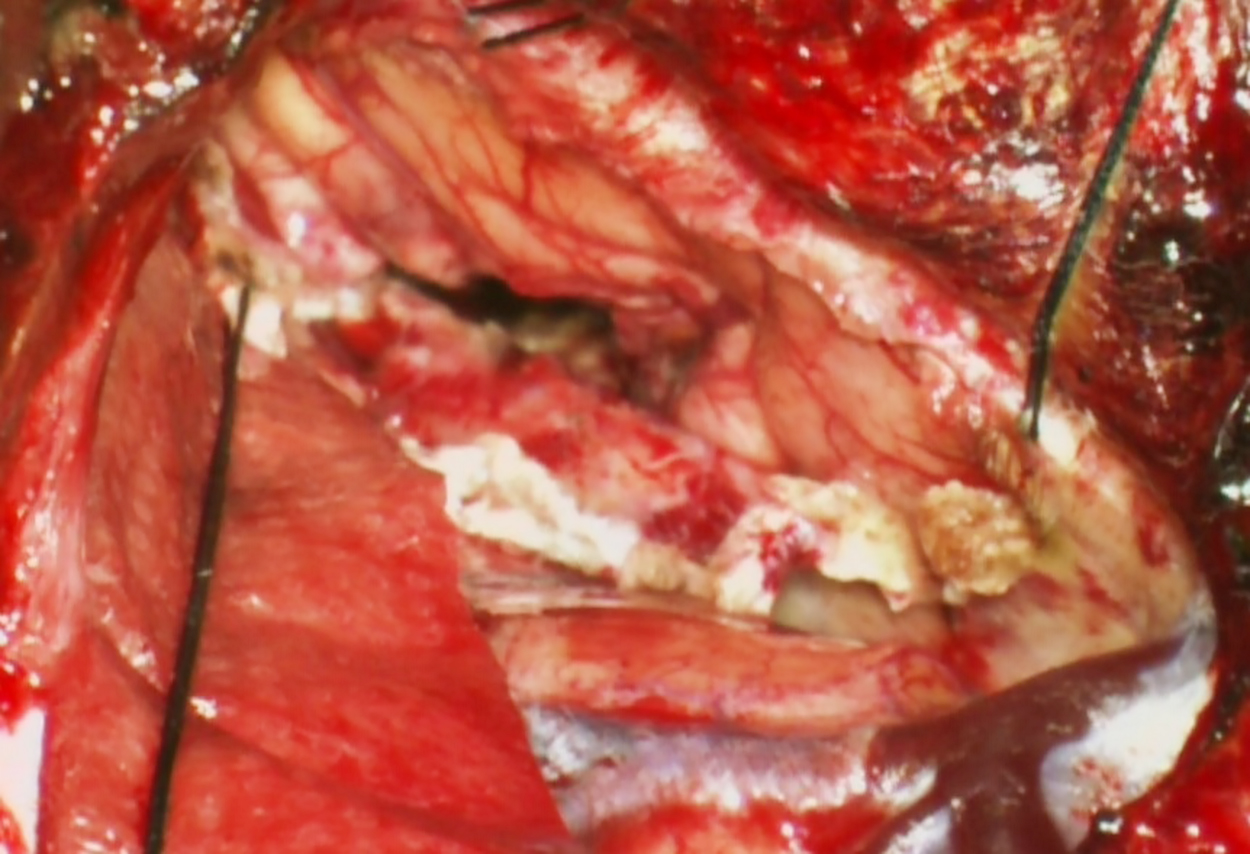 Figure 13: The extent of the transprecuneus corticotomy after resection of a large left intra-atrial meningioma is shown. One of the falcine retention sutures (the anterior one) was removed to allow a more clear depiction of the operative corridor.

Once hemostasis is achieved, a ventricular catheter in implanted to drain debris within the ventricle and decrease the risk of hydrocephalus. The falcine dural flaps are returned to their original position and the convexity dura is closed.

Patients are observed in the intensive care unit for one or two days before they are transferred to the ward. Hypertension and overmedication with narcotics must be avoided. The ventriculostomy catheter is usually removed on the 2nd postoperative day. Anticonvulsant medications are administered.