The peritoneum is the preferred and most common location for placement of the distal terminus of a cerebrospinal fluid (CSF) shunt. However, there are instances in which the peritoneum is not a suitable place for the shunt, such as in the case of a congenital abnormality, infection, or extensive adhesions, which may prevent absorption of CSF. In such cases, other anatomic locations are considered, including the right cardiac atrium and pleural cavity.

In some patients, all of the routine distal sites are unsuitable. These patients often have complex problems and have experienced multiple shunt failures or infections. Examples include prematurely born infants with necrotizing enterocolitis and patients with congenital diaphragmatic hernia, spina bifida, or history of shunt infection. Other potential problematic situations include congenital diaphragmatic hernia, spina bifida, and history of shunt infection. Tuberculosis can cause abdominal, pulmonary, and intracranial problems, and these complications are continuing problems worldwide.1 In patients with complex hydrocephalus, another distal site might be required.

The gallbladder is a potentially effective location when the more common sites for distal shunt placement have failed. This concept was first explored in 1958 by Smith et al.2 The gallbladder is an effective distal terminus of a shunt because the bile is sterile, the intestinal tract will effectively absorb electrolytes, and the lytic nature of the bile might prevent scarring and distal catheter occlusion. However, experience with ventriculo-gallbladder (VGB) shunts is limited. Placement of a VGB shunt is considered a salvage procedure because of the high complication rate.

Surgical planning is essential for every shunt-placement surgery, and the procedure should be performed in collaboration with an experienced general surgeon.

Imaging studies must be performed to evaluate for the presence and size of the gallbladder. Imaging is used also to identify any disease process that can hinder the surgery. Possible conditions that would preclude surgery include extensive cholelithiasis or cholecystitis. Patients with hepatic or pancreatic disease are not suitable candidates for VGB shunt placement. Cholestatic jaundice is relatively common in infants who require long-term total parenteral nutrition; therefore, more extensive evaluation of hepatic and gallbladder function might be necessary for these patients.3

The patient’s ventricular anatomy is examined, and the site of the proximal catheter is selected in the same fashion as that when performing VP shunt placement.

Preoperative antibiotics are given. A widely accepted protocol for reducing the risk of infection is provided by the Hydrocephalus Research Network.4 Because the use of VGB shunts is rare compared to that of standard VP and VA shunts, not enough evidence is available to recommend a certain prophylactic antibiotic regimen. Coverage for Gram-negative organisms (gentamycin or a third-generation cephalosporin) is often added to the standard antibiotic regimen. However, the organism cultured most commonly from infected VGB shunts is Staphylococcus epidermidis, which indicates that VGB infections have an etiology similar to that of VP shunts.3

Placement of the proximal catheter is performed in the same manner as for a VP shunt. This technique is described in the VP shunt placement chapter.

The general surgeon chooses the abdominal approach. Both open and laparoscopic techniques can be used effectively, depending on the experience and preference of the general surgeon. Communication between the surgical teams before surgery is essential for ensuring that the operating room is equipped properly for the procedure. 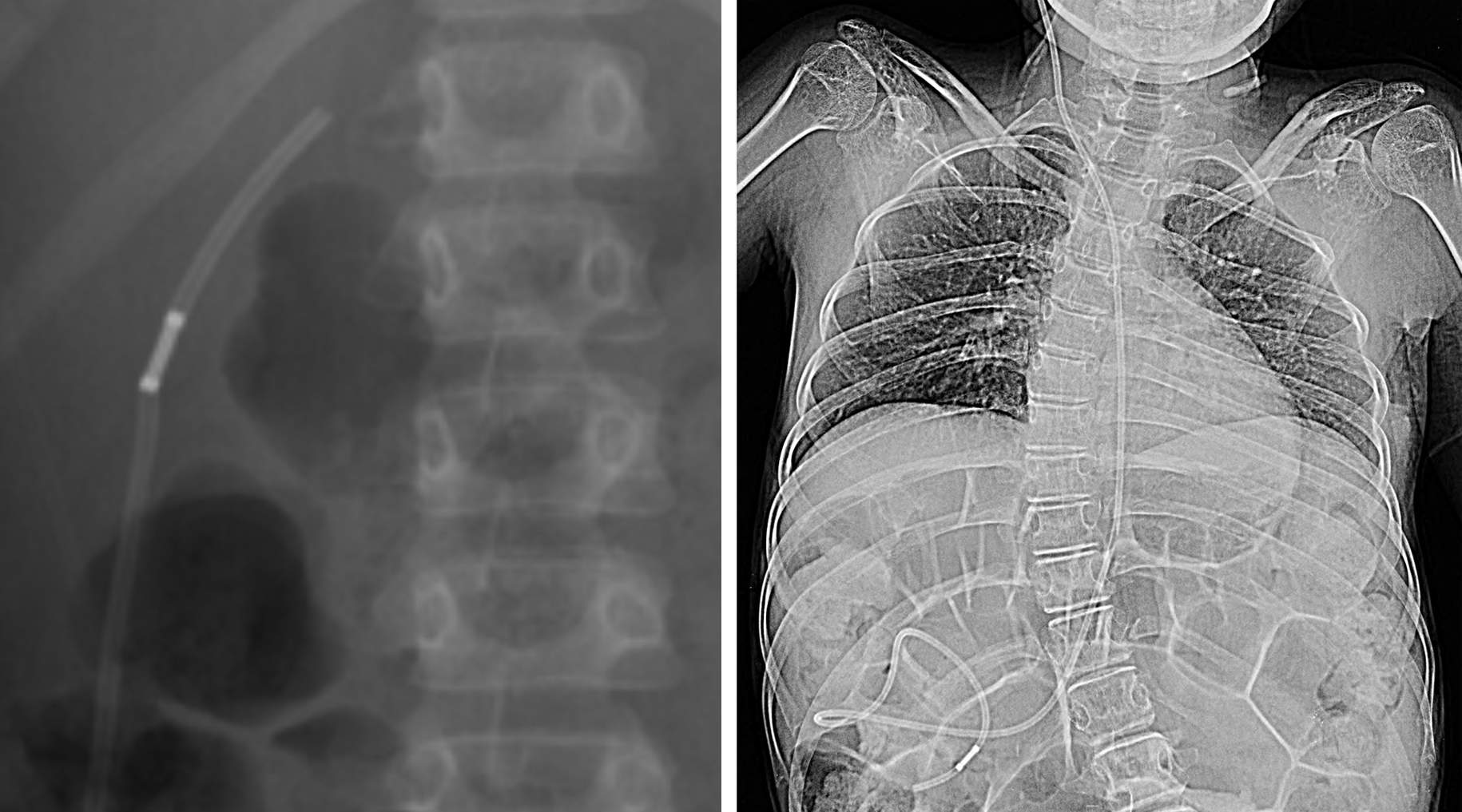 The distal catheter is then placed into the peritoneal cavity through an incision or port, depending on whether the exposure is open or laparoscopic, respectively. 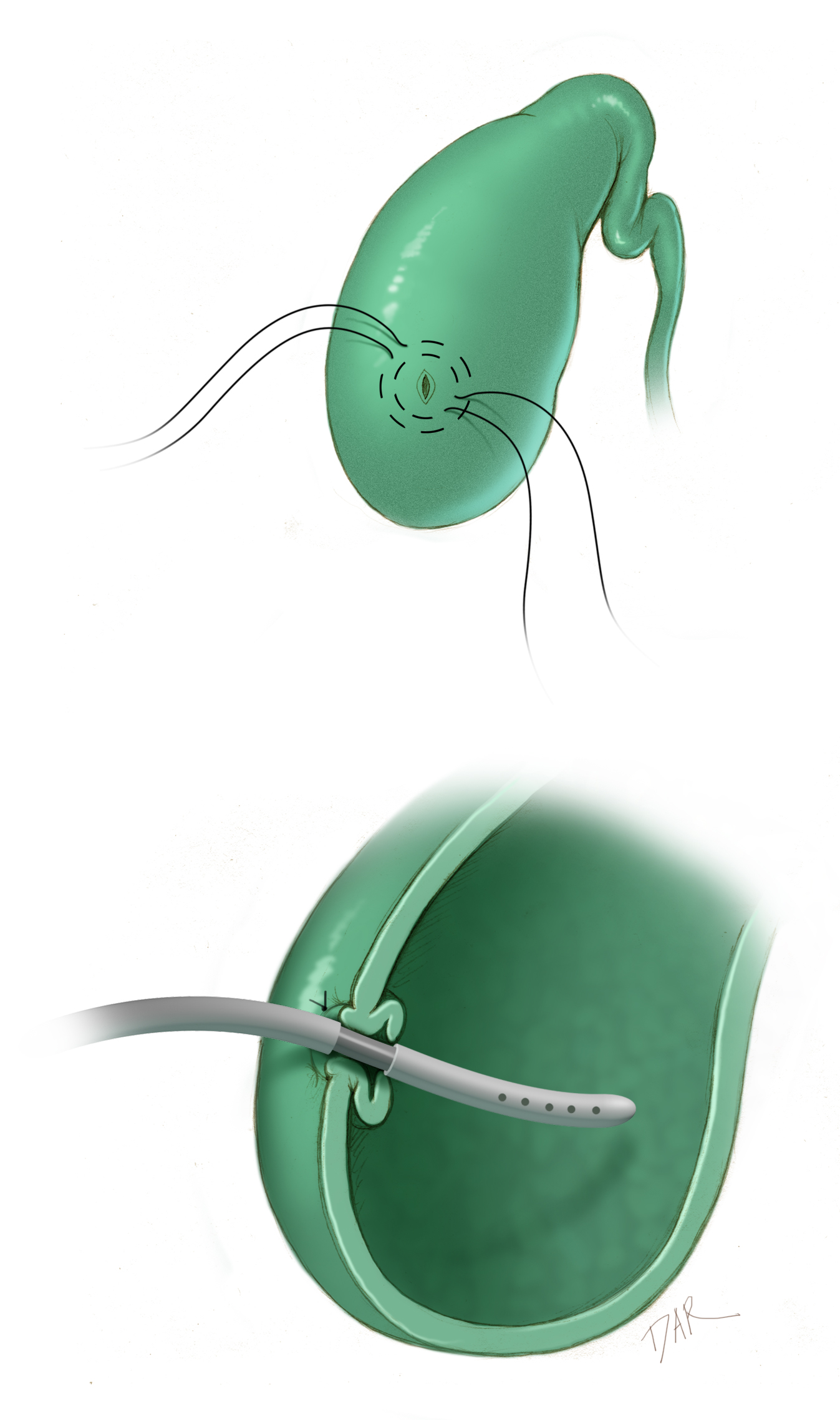 Figure 2: Two concentric purse-string sutures are placed in the dome of the gallbladder, one inside the other. A puncture is made in the center for placement of the distal catheter. The purse-string sutures are tightened around the metallic straight connector, thus fastening the distal catheter to the gallbladder wall and inverting the wall for a secure seal.

It is important to secure the catheter to the gallbladder to prevent the distal end from migrating into the peritoneal space, which presumably has already failed. Also, an open hole in the gallbladder wall can allow leakage of bile and subsequent peritonitis. Finally, excess catheter is coiled loosely over the liver.

VGB shunt placement confers the same risk of all the inherent complications that can occur with the placement of a VP shunt, including malfunction and infection. Very few published articles have detailed experience with VGB shunts. In the largest case series, 9 (36%) of 25 shunts were eventually removed as a result of infection.3 The infecting organisms were similar to those found in patients with a standard VP shunt (S epidermidis is the most commonly found pathogen) except in 1 patient, who developed an enteric fistula. The literature has insufficient data regarding the failure rate, but it is presumed to be higher than those for VP and VA shunt failure.

Complications specific to VGB shunts can also occur. Gallbladder atony or cholestasis can occur in response to surgery, spasm of the sphincter of Oddi, or perioperative narcotic use. This complication may be treated with intravenous cholecystokinin. Reflux of bile causing meningitis or ventriculitis has been reported also.5,6 Fracture of the distal tubing can allow bile to reflux into the peritoneal space and cause peritonitis.7

Because placement of a VGB shunt is generally reserved for use as a salvage procedure, patients undergoing the surgery often have multiple medical comorbidities. Patients should be carefully observed for abdominal complications, shunt failure, and pulmonary edema.

Although rarely used as such, the gallbladder can be an effective distal terminus for a CSF shunt in certain patients with a complex condition. Surgeons treating complex hydrocephalus should be familiar with this technique and its potential complications.