For general information, operative indications, and preoperative considerations, please refer to the chapter on the Principles of Dural Arteriovenous Fistula Surgery.

Please note the relevant information for patients suffering from dural arteriovenous fistula is presented in another chapter. Please click here for patient-related content.

Certain dural arteriovenous fistulas (dAVFs) do not furnish reasonable transarterial or transvenous access routes and are suited for microsurgery. Examples of these operative fistulas are ethmoidal, or anterior fossa, and superior petrosal sinus, or tentorial fistulas. These fistulas almost always harbor cortical venous drainage since they are not related to a dominant venous sinus.

As shown by their natural history, untreated dAVFs with cortical venous drainage carry a high risk of morbidity and mortality. The dAVF must be treated with occlusion of the venous side of the fistula; arterial occlusion alone will not result in an effective and durable cure.

Unlike AVMs, which have a nidus within the brain parenchyma and are subject to hemorrhage and rupture in the event of venous occlusion before all their arterial feeders are disconnected, the dAVF’s nidus (or fistula) is within the contained thickened leaves of the dura. Therefore, venous occlusion is safe and curative.

The majority of superatentrial fistulas that are suitable for operative intervention are ethmoidal and focal parasagittal dAVFs.

Venous varices on the arterialized vein of the ethmoidal dAVFs carry a significant risk of hemorrhage. Due to the pial nature of these veins, there is no practical transvenous route to reach them. The transarterial route is through the ophthalmic artery, rendering transarterial embolization a risk for blindness. Surgical treatment, however, is technically easy, low risk and curative.

The goal of ethmoidal dAVF surgery is ligation and disconnection of the arterialized draining vein(s) at the level of the dura where the fistula is located. A unilateral supraorbital craniotomy is usually sufficient.

A bifrontal craniotomy is rarely needed and only if the fistulous veins are bilateral and on both sides of the crista Galli. However, this approach is usually unnecessary, even with dAVFs with bilateral feeding arteries, because the draining vein is unilateral and is the primary object of disconnection.

The patient is placed in a supine position with the head gently extended so that the frontal lobes fall back with gravity, but not so much that the orbital rim obstructs the operative line of sight. I use a lumbar drain to facilitate frontal lobe mobilization. An eyebrow or Soutar skin incision is employed, eccentric to the side of the venous drainage. The pericranium should be harvested because it is likely that the craniotomy will violate the frontal sinus.

I incise the dura in a “U” or cruciate fashion based on the floor of the orbital roof, taking care to inspect and protect an underlying arterialized vein adherent to the dura.

Once the dura has been maximally mobilized, the frontal lobe is gently elevated and the arterialized draining vein is found at its dural connection along the anterior cribiform plate, where it is fed by the ethmoidal arteries, or medially along the falx, by the anterior falcine artery. There is frequently a venous varix at the site of the fistula. This varix is the site of bleeding in hemorrhagic cases.

The vein or the varix is separated from the surrounding brain and a temporary clip is placed on the arterialized vein at its origin close to the dura, ensuring that the arterialized vein turns dark blue. Once confirmed, a small straight permanent clip is placed across the vein and the vein is coagulated and cut. Fluorescence videoangiogram can confirm the desirable result.

Figure 2: A right-sided ethmoidal fistula (left image, arrow) is demonstrated at the level of the anterior cribriform plate. The draining vein (right image, arrow) was exposed via a right-sided eyebrow supraorbital craniotomy. The arterialized vein was found next to the falx, coagulated, and divided.

Superior sagittal sinus dAVFs are rare entities and comprise 5% of all dAVFs. Trauma, tumors near the sinus, and sinus thrombosis have all been implicated in the pathogenesis of this type of fistulas.

These dAVFs commonly occur along the midportion of the superior sagittal sinus and are fed by bilateral arterial input from the middle meningeal, occipital, superficial temporal, vertebral, and anterior falcine arteries. Effective fistulous occlusion can be effectively attained via endovascular methods in most cases.

If endovascular methods are not feasible because of poor access or if the fistula recurs after such treatment, operative intervention is warranted. Microsurgery involves disconnection of the fistulous vein(s). Some patients require skeletonization of the pathologic segment of their sinus. Alternatively, surgical exposure of the sinus allows access for direct sinusal puncture and embolization. A combination of microsurgical and endovascular intervention may also be necessary.

If complete occlusion of the involved segment of the sinus is warranted, the posterior two-thirds of the patent sinus is preserved to minimize the risk of venous infarction.

Figure 3: A left posterior frontal craniotomy for clip ligation of a single parasagittal fistula draining into the midportion of the superior sagittal sinus is illustrated. The arterialized cortical vein demonstrates venous ectasias, which are very common in this subtype of dAVFs and carry a significant hemorrhage risk (left). A clip is placed on the arterialized vein at the site of its connection to the venous sinus with resultant occlusion of the fistula (left image, inset), after which the varices turn dark blue (right). Intraoperative fluorescence videoangiogram can confirm the lack of flow within the venous ectasias or varices. The varices do not need to be resected. 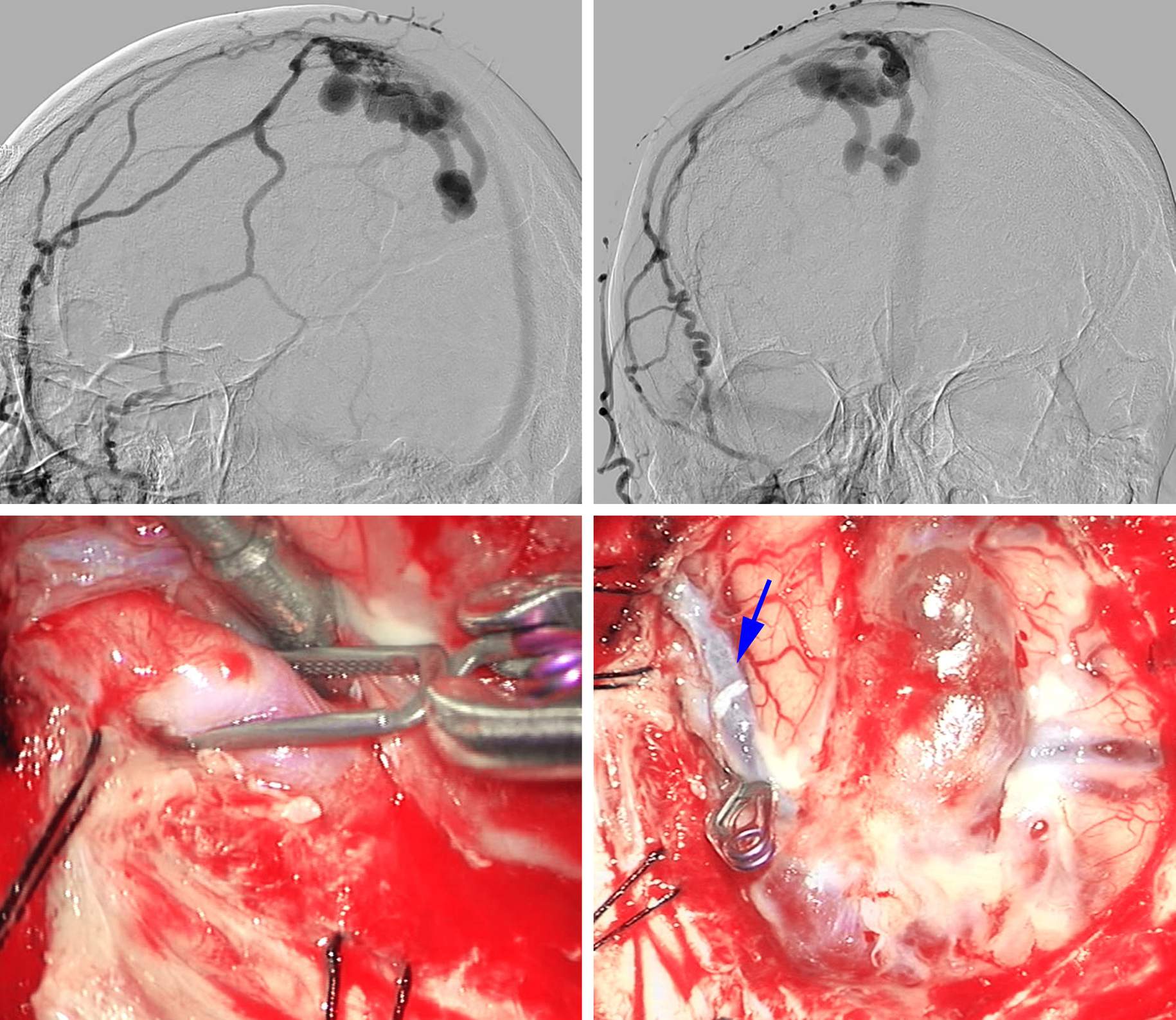 Figure 5: These AP and lateral ECA angiograms (top row) demonstrate a left tentorial dAVF (arrows) supplied by the middle meningeal artery branches. The supratentorial arterialized cortical vein was associated with a small varix in the posterior temporal region. This varix ultimately drained into the left transverse sinus. The arterialized vein over the posterior tentorium (second row, purple arrow) was exposed via a posterior temporal craniotomy; the location of the vein of Labbe is marked with a blue arrow. Intraoperative fluorescein angiography demonstrated the early draining fistulous vein (third row, purple arrow) while other cortical veins (blue arrow) did not enhance yet. A clip disconnected the fistula at its exit site and near the varix at the level of the tentorium (bottom photo).

Endovascular transvenous and/or transarterial embolization is the first line of treatment for transverse/sigmoid dAVFs. However, there are rare cases where the sinus cannot be occluded, such as with a dAVF located at the torcula or a malignant fistula that tends to recur or does not have adequate endovascular access routes. In these cases, the venous sinuses can be disconnected from their feeding arteries and skeletonized.

The dAVFs of the transverse/sigmoid sinuses are the most common intracranial dAVFs. Their main arterial supply arises from the transmastoid branches of the occipital artery, the posterior auricular artery, the middle meningeal artery, and potentially the ascending pharyngeal artery. Venous drainage is via the ipsilateral transverse/sigmoid sinuses or through the contralateral side if the ipsilateral sinus is occluded.

Preoperative transarterial embolization is crucial in decreasing the risk of intraoperative bleeding.

I prefer the park-bench position, head turned toward the floor, and the lesion placed at the highest point on the head. A horseshoe or “S”-shaped incision is used to generously expose the area of the fistula as guided by intraoperative image guidance based on a CT angiogram.

The hypertrophied occipital and posterior auricular arteries are coagulated or clipped and divided. The scalp and suboccipital muscles carry numerous feeders to the fistula and stepwise immaculate hemostasis is paramount.

The craniotomy exposes the transverse sinus and the dura above and below it. I usually prefer to perform a craniectomy rather than a craniotomy to prevent the sudden torrential bleeding from the transosseus feeders to the dura during elevation of the bone flap. Any dural laceration is avoided via additional burr holes. Excessive bleeding from the dura is controlled via tamponade using large pieces of Gelfoam or Surgicel. Dural feeders are managed via bipolar electrocautery or hemostatic clips.

The intradural portion of the operation is conducted based on the specific anatomy of the underlying dAVF. If disconnection of the arterialized cortical vein(s) is the main goal, the dura is incised at the corresponding location of these veins and based on the transverse sinus. All arterialized veins should be found and disconnected. Intraoperative fluorescence and catheter angiograms can help confirm the exclusion of the target(s).

If the goal of surgery is resection of the fistulous segment of the occluded sinus, a unilateral partial mastoidectomy is completed using a diamond burr mounted a high-speed drill. This maneuver should expose the dura lateral and anterior to the sigmoid sinus. The dura is incised superior and inferior to the transverse/sigmoid sinuses and parallel to their long axes. Feeding arteries are coagulated or clipped in a stepwise fashion. Following skeletonization of the nonfunctional transverse/sigmoid sinus segments, I place two sutures through the tentorium to ligate the target segment of the sinus.

I gently elevate the occipital lobe and retract the cerebellum after gradual lumbar CSF drainage. This maneuver allows me to expose the tentorium further and disconnect all of its feeding vessels to the ligated section of the sinus and cut the tentorium parallel to this section. This technique releases the isolated pathologic segment of the dural sinus.

For further details, please refer to the chapter on the Principles of Dural Arteriovenous Fistula Surgery.