Resection of a Posterior Mesencephalic and Pontine Pilocytic Astrocytoma

This chapter describes the techniques for resection of dorsal brainstem gliomas along the superior pons and mesencephalon. For general considerations, diagnosis, evaluation, and preoperative/postoperative considerations, please refer to the chapter on the Principles of Brainstem Surgery.

Removal of gliomas located within the brainstem is risky and not commonly advised. Very focal benign gliomas, such as pilocytic astrocytomas, are an exception; the offer of surgery should be judiciously considered. Most such tumors are not operative candidates unless the tumor is cystic and the nodule is in the proximity of a safe pial surface. 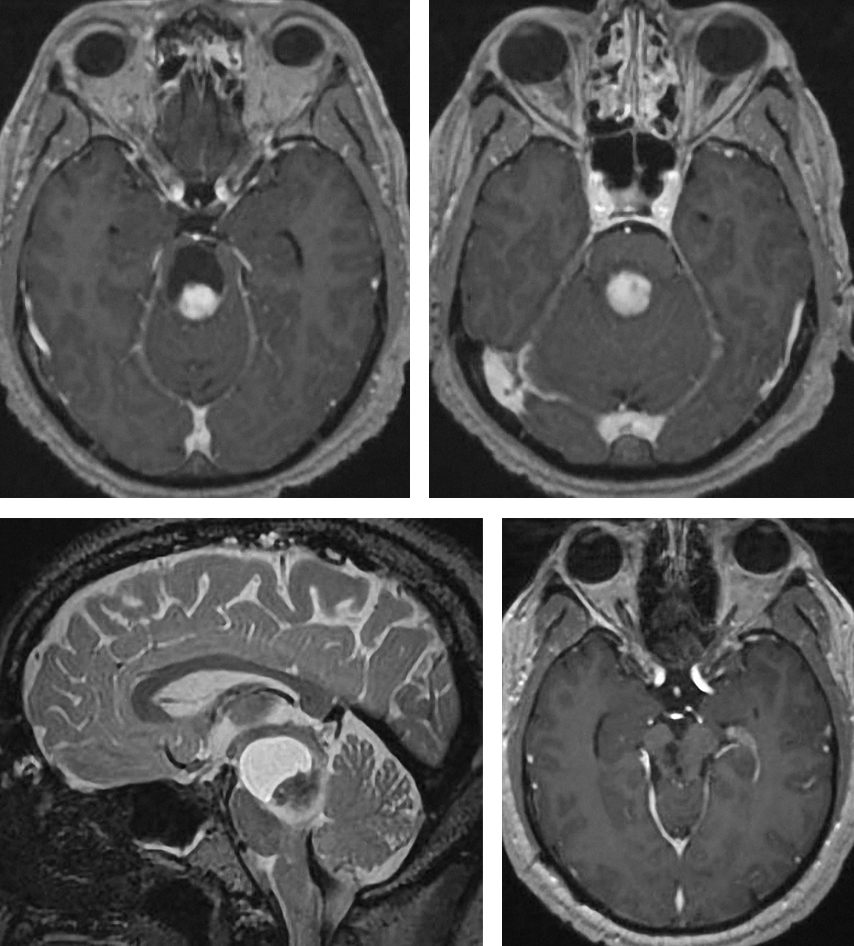 There are numerous approaches adopted for reaching brainstem lesions. The telovelar approach is suitable for dorsally exophytic tumors. The retromastoid craniotomy is effective for anterior and lateral focal pontomedullary tumors via the middle cerebellar peduncle.

The paramedian supracerebellar route is ideal for dorsal mesencephalic and superior pontine masses and is used for the following intradural steps. Midline tumors are approached via a left sided craniotomy (placing the nondominant rather than dominant transverse sinus at risk,) while asymmetric lesions are exposed via the ipsilateral side.

Following completion of the left supracerebellar craniotomy, I mobilize the cerebellum inferiorly and reach the posterolateral mesencephalon. 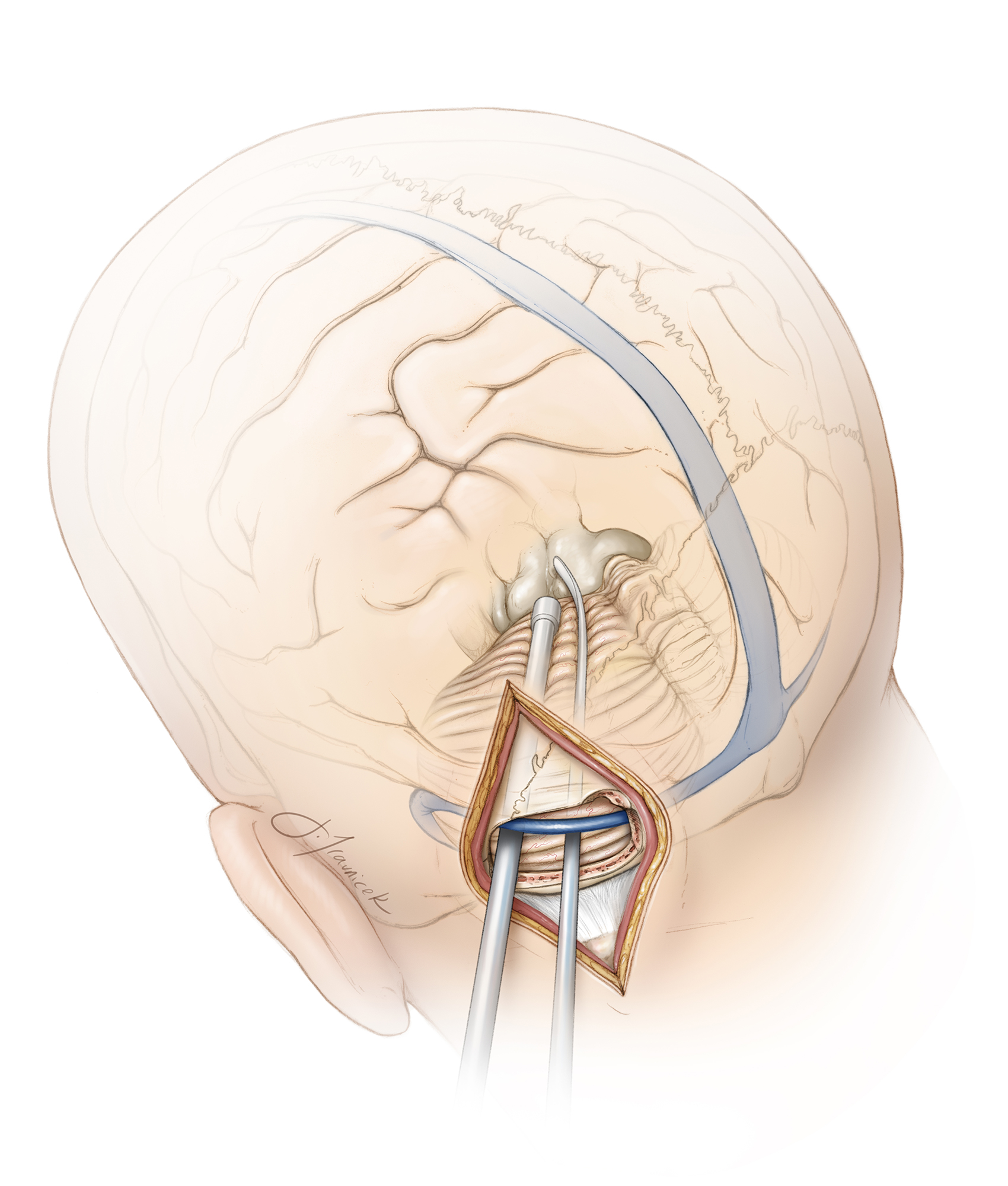 Figure 2: The “cross court” paramedian trajectory to midline dorsal mesencephalic and pontine tumors is beneficial since the tentorial surface of the cerebellum is highest along its anteromedial apex and slopes down laterally. Therefore, the lateral paramedian operative corridor provides a more inferior trajectory as compared with the midline trajectory to access the inferior extension of pontine tumors.

Dynamic retraction of the cerebellum using the suction apparatus allows exposure and resection of the inferior extent of the tumor without the use of fixed retractors. The suction apparatus allows a more controlled expanded view of the working zone at the exact location of the dissection, whereas the wide blade of the retractor may compromise the deep exposure because of its less flexible vector of retraction. Generous exposure of the contralateral tectum is readily available through this unilateral working channel near the falx cerebelli. 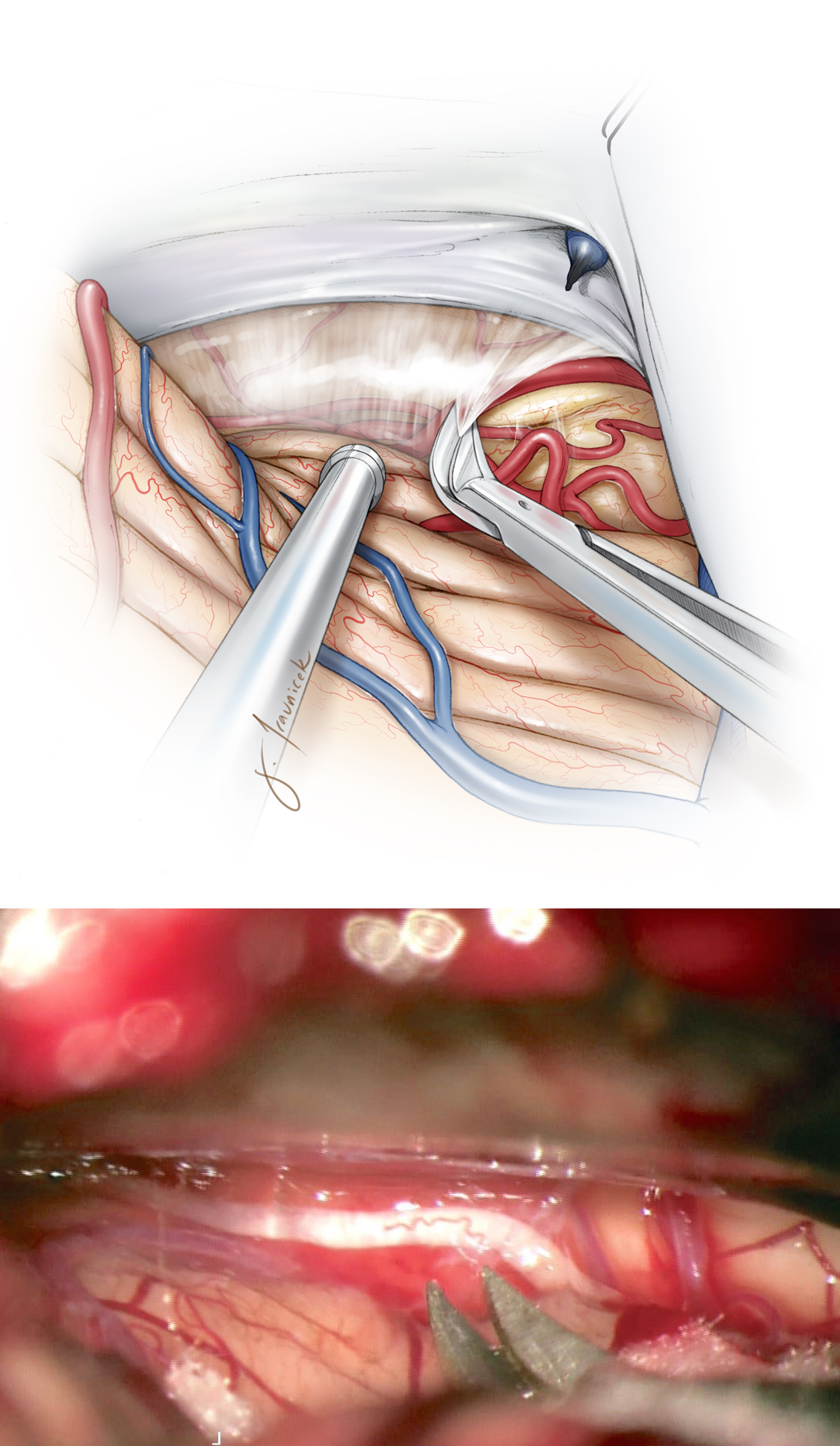 Figure 3: Dissection of the arachnoid membranes over the dorsolateral mesencephalon will mobilize the cerebellum downward and open the corridor toward the midline. The trochlear nerve is evident in the inferolateral corner of the exposure. 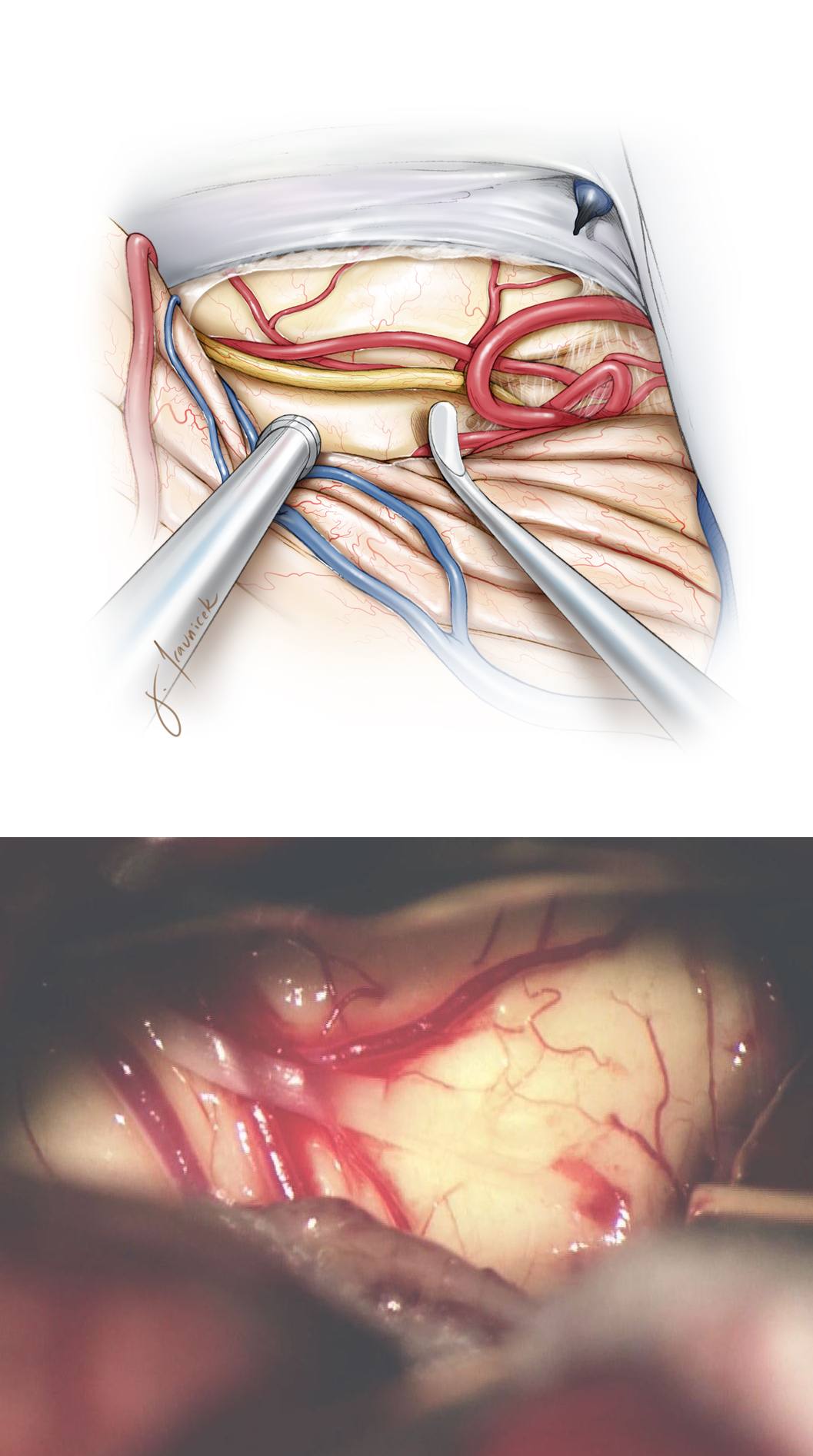 Figure 4: The trochlear nerve is identified. A supratrochlear or infratrochlear working channel is selected based on the location of the lesion to the nerve. Intraoperative navigation is important for this tumor localization. The branches of the superior cerebellar artery are protected. 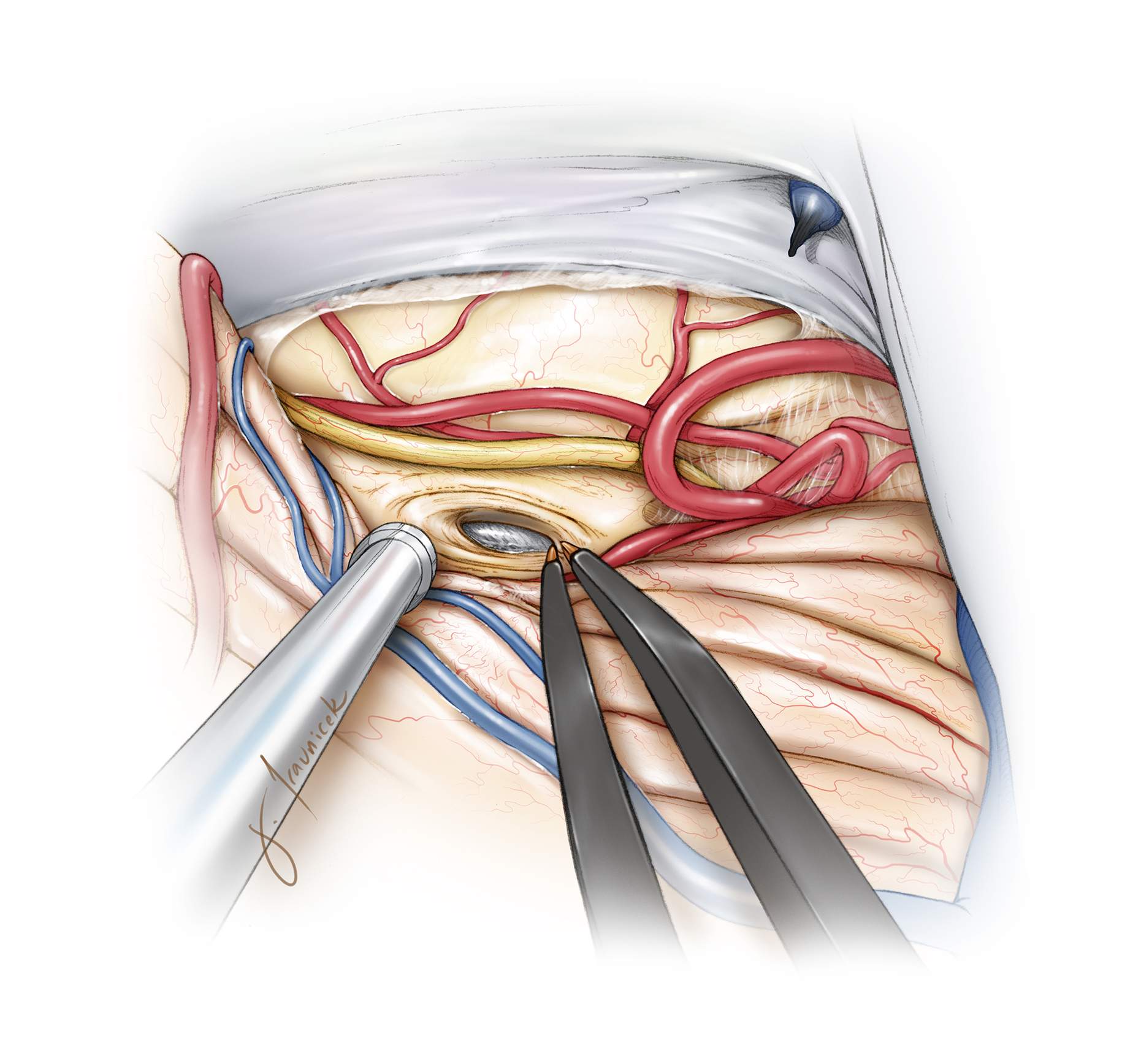 Figure 5: A small myelotomy is completed over the middle of the posterior tumor capsule. Gentle blunt vertical dissection around and parallel to the white matter fibers continues until the discolored tumor is identified. There is often more operative working space within the supratrochlear triangle where vertical incisions are feasible. The infratrochlear triangle is small, despite mobilization of the trochlear nerve, and a short horizontal incision is used to prevent any injury to the nerve. 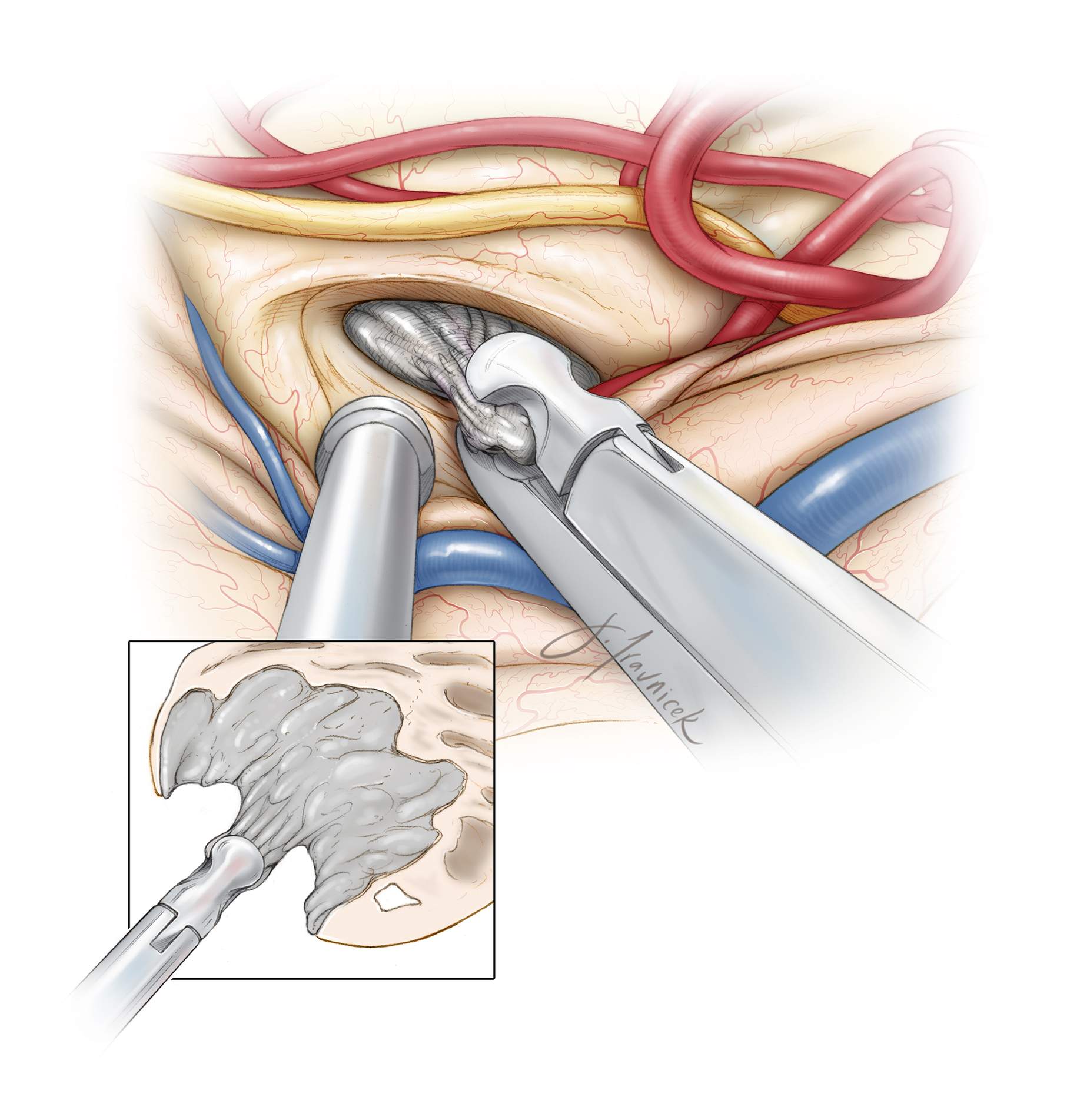 Figure 6: If the cyst is easily accessible, it is drained first before tumor removal. A small myelotomy is used as a keyhole to resect the tumor piecemeal, rather than creating a longer incision to expose the entire tumor capsule at once. Dynamic retraction using the suction device is a key maneuver for the success of maximal resection through narrow corridors. 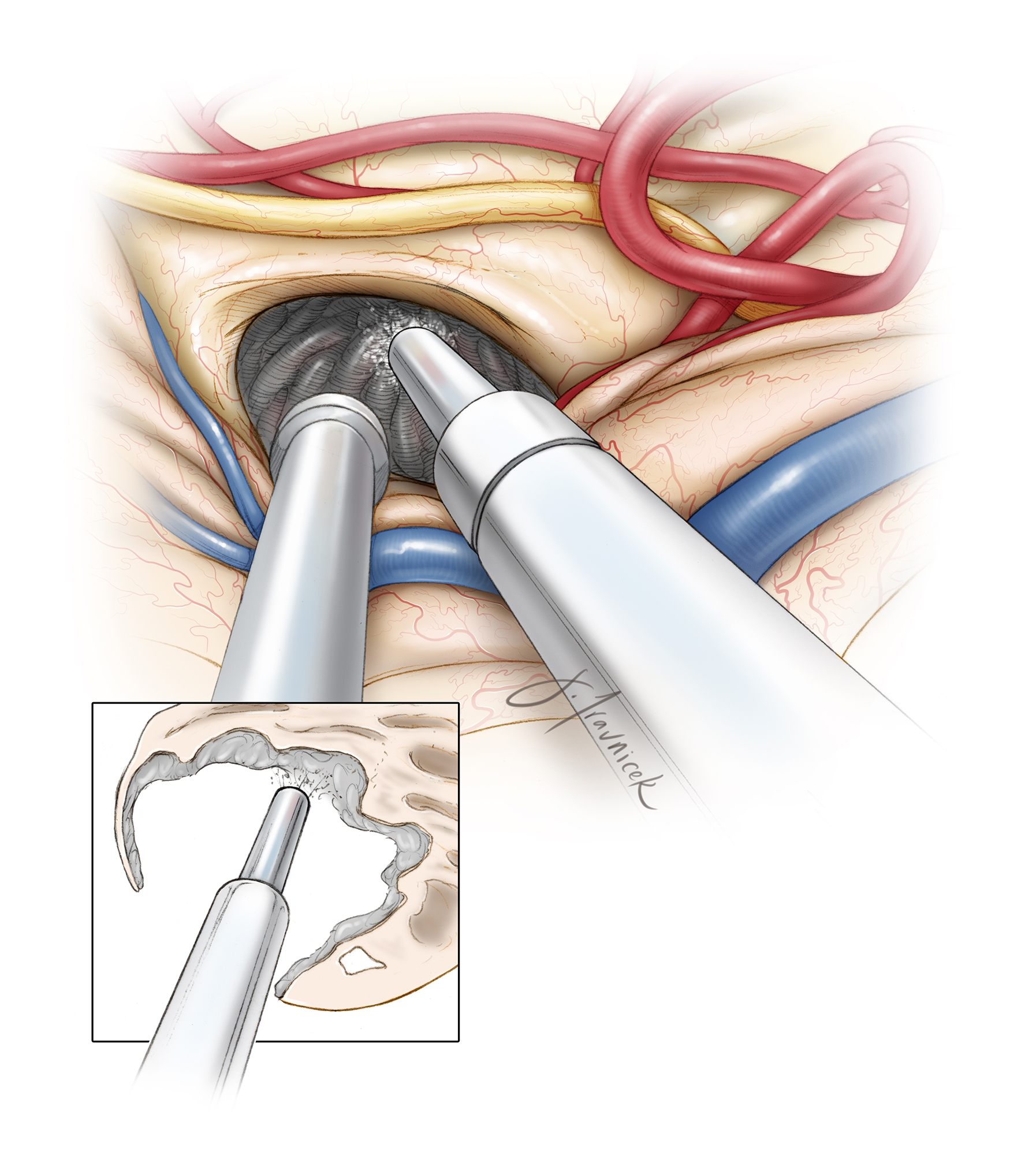 Figure 7: Central debulking is pursued using a combination of gentle suction and ultrasonic aspiration. Ultrasonic aspiration allows gentle removal of the firm tumor in layers without undue pulling and traction on the vital tracts. The extent of resection is guided by multiple modalities: visual inspection (resection is halted if the dissection planes are approaching and not clearly reaching peritumoral normal tissue), neuronavigation, and physiologic changes (either hemodynamics or neuromonitoring).

The cyst wall is not lined with neoplastic tissue; the goal is resection of the enhancing nodule, similar to surgery for cerebellar pilocytic astrocytomas. Once the cyst is penetrated and drained, even a slight shift in the location of the brainstem will disrupt neuronavigation accuracy. Therefore, it is important to establish the tumor’s pathoanatomy ahead of time before cyst drainage. 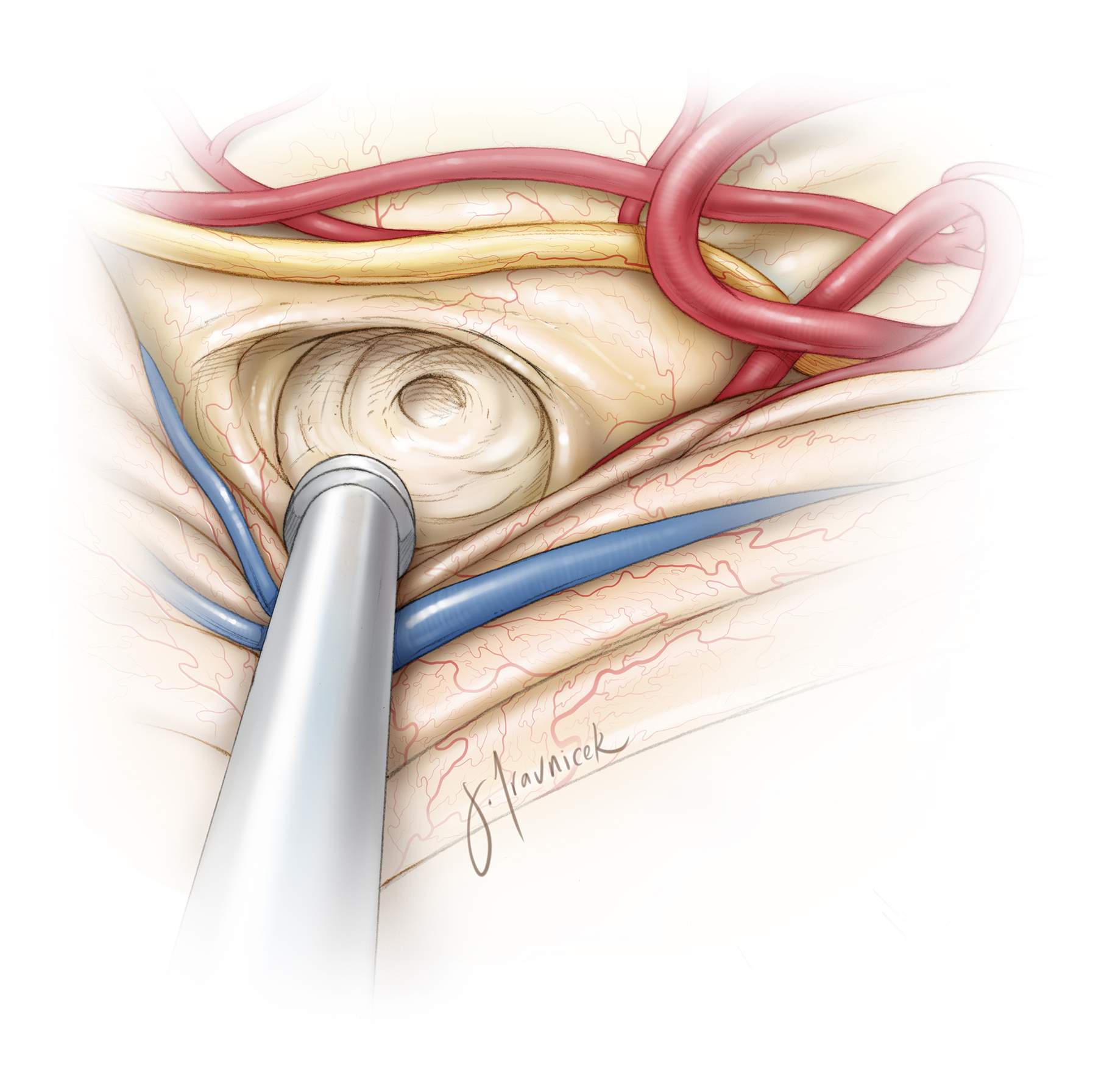 Figure 8: If relatively clear planes between the normal and abnormal tissues are present, these planes can guide resection maneuvers. Most brainstem tumors do not own clear borders, and subtotal resection is advisable.

Because these tumors are usually histologically benign, similar to cerebellar pilocytic astrocytomas, the residual mass may be observed expectantly over time and will most likely remain stable indefinitely or even involute. In rare cases, regrowth of an exophytic component may be reresected if needed.