Management of Intraoperative Rupture during Resection of a Lateral Temporal AVM: The “Commando” Operation

Intraoperative rupture (IOR) of an arteriovenous malformation (AVM) presents unique challenges to the surgeon unlike any others. In contrast to aneurysm surgery, there is no proximal control that can save the surgeon and bring the situation under control quickly. The AVM’s IOR tests the surgeon’s highest level of temperament and maturity, as well as his or her technical fluency and efficiency.

The best strategy for managing an IOR is to avoid it. Therefore, we must analyze the most common underlying causes for IOR during AVM surgery. I have been involved with numerous IORs because of an inadvertent injury to the primary draining vein during management of bleeding from a feeding vessel underneath this major draining vein. I have also accidentally injured primary veins during the dural opening. Aggressive coagulation of the nidus or the primary vein wrapped on the deep walls of the nidus leads to acute changes in the AVM’s drainage systems and is a guaranteed recipe for disaster.

During dural opening, the surgeon should consider all of the factors necessary to preserve the vein and leave the dura over the vein intact. Overzealous efforts to dissect the dura along the vein can be harmful.

There are often one to three sizable feeding arteries under the primary draining vein; these arteries present unique challenges in their control because of the limited space available underneath the vital vein for their manipulation. It is best not to aggressively and cavalierly manipulate the supplying vessels near the vein or the AVM nidus early in dissection.

It is not uncommon for a novice AVM surgeon to get into trouble despite seemingly innocent maneuvers. The surgeon attempts to stop bleeding from an annoying white matter feeder, but instead finds himself or herself creating a defect in the nidus. At this point, it is tempting to use bipolar forceps and continue coagulating the feeder and the wall of the nidus. However, these maneuvers invariably lead to more nidal bleeding, forcing the surgeon to continue a vicious cycle of increasingly indiscriminate coagulation, which provokes even more torrential bleeding because of flow changes within the nidus. Before long, the surgeon injures the draining pedicle of the AVM leading to the primary vein around the circumference of the nidus. IOR ensues, and torrential bleeding leaves the surgeon questioning why this happened. Acute hemodynamic alternations within the nidus are not tolerated before all the major feeding vessels to the AVM are disconnected. This importance of this concept seems to be underestimated

AVM surgery usually starts as the most beautiful, elegant, and pristine microsurgical operation, but it can finish as the bloodiest, most disruptive, and humbling one, leaving the pride of the embarrassed surgeon wounded and the patient facing serious complications. AVM rupture indicates that the patient and the surgeon have lost the battle and the AVM has won. In these situations, I review the recorded video of the operation after surgery and analyze the lapses in strategic planning and execution. An objective and critical review of the video provides important lessons that cannot be undervalued.

Complication Management during IOR of an AVM

When I find myself facing torrential IOR during AVM surgery. I step back, inspect the operative field through demagnified oculars, and consider all of my options and their consequences. No matter how sure I am of the next step, this maneuver is important to prevent additional potentially calamitous reflexive operative responses. Any seemingly audacious maneuver by the surgeon can make the patient pay a heavy price with a catastrophic neurological result. The maturity of the surgeon is tested when the fatigued surgeon is under intense pressure and has little time to respond.

If torrential bleeding occurs, I use a large bore suction to clear the field and follow the flow of the blood. The rapid and spiraling rise in the tide of blood in the operative field under the magnified view of the microscope is unsettling and affects the composure of the most skillful surgeon. Once the sources of bleeding are found, the next steps are planned quickly, but thoughtfully. I communicate with the anesthesiologist regarding the critical state of the operation so the appropriate steps are taken. I also confirm that the patient’s systolic blood pressure is at least temporarily approximately 20% below normal. Profound hypotension is avoided to minimize the risk of cerebral ischemia.

Arterial bleeders are on the parenchymal side and are often deep white matter feeders. These feeders are highly dysplastic and create the most technical challenge in AVM surgery. They can easily retract into the white matter and lead to symptomatic remote intracerebral hemorrhage and brain tension, forcing the issue of premature closure before AVM removal.

When brisk arterial bleeding occurs, packing the operative field is prohibited. A large bore suction is used to clear the field, and the surgeon pursues the flow of blood to find the source. Next, the surgeon uses a small cottonoid patty to cover the area next to the bleeding point so that the force of the suction does not remove healthy brain tissue.

The deep white matter feeders have little elastic tissue and smooth muscle layer, and therefore they do not constrict upon bipolar coagulation. Instead, they continue to bleed vigorously and retract into the white matter. Deep white matter feeders must be isolated via removal of a small amount of the white matter immediately around them; their more normal segment away from the nidus is then exposed and coagulated along a portion of their segment by drawing a section of the bleeding vessel into the barrel of the suction device. This maneuver is critical to avoid unnecessary morbidity associated with AVM surgery. 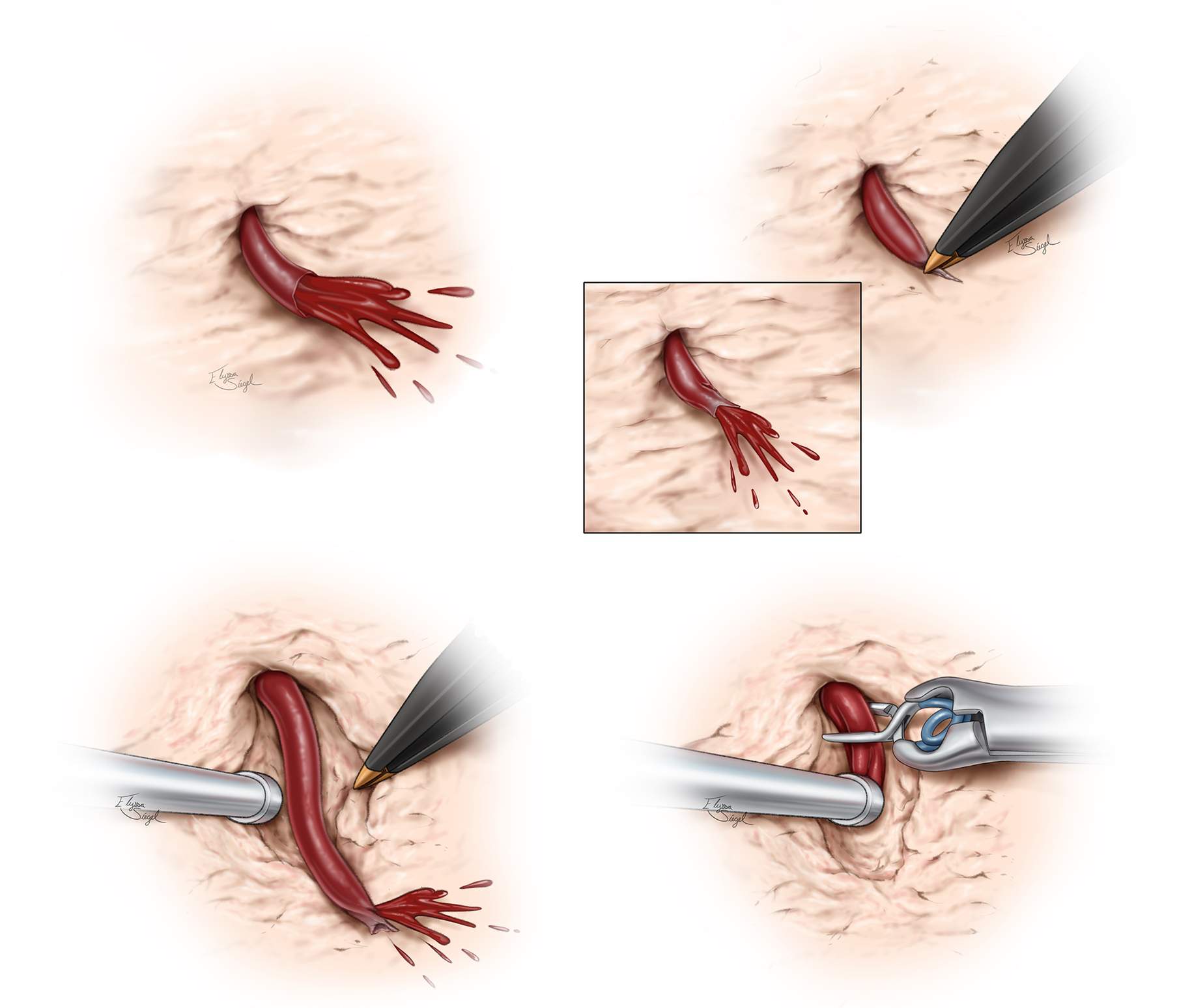 Figure 1: In contrast with cortical arterioles, the small caliber deep white matter feeders have little elastic tissue and smooth muscle layers, and therefore do not constrict upon bipolar coagulation (upper images). They may continue to bleed vigorously, retract into the white matter, and cause intracerebral hemorrhage in an area of the brain away from the AVM. Deep white matter feeders must be pursued and isolated via removal of a small amount of the white matter immediately around them (left lower image) so that their more proximal segment with relatively normal walls, away from the nidus, is preferably coagulated or clip ligated (right lower image). Packing the bleeding site with hemostatic materials will not attain hemostasis; this only provides the surgeon with a false sense of security and leads to brain swelling because of remote intracerebral hematomas.

AVM microclips may be used (I prefer small aneurysm miniclips) if the small feeder continues to resist coagulation. In general, I avoid clips because they can be at times unreliable in their effect and their bulk interferes with the next steps of microdissection.

I have also witnessed eruptive rupture of the adjacent normal cortex and explosive bleeding from this rupture site as the pressure gradient finds the path of least resistance to decompress the hematoma cavity caused by an overlooked white matter feeder.

Covering the bleeding points with hemostatic materials, including Surgicel, provides a false sense of security to the surgeon. Loss of control over the ependymal and periventricular choroidal feeders can lead to massive intraventricular hemorrhage and sudden brain swelling. This type of bleeding may not be apparent in any form to the operator; its only presentation involves unexpected narrowing of the operative corridor and brain swelling. Therefore, if such brain swelling is encountered during dissection at the depth of the AVM, I immediately inspect first the depth of the cavity, and then the adjacent ventricle for an expanding hematoma.

Under these unfortunate circumstances, I follow the trail of blood and remove the contused brain tissue only to find a deeply retracted large white matter perforator that previously seemed to have been under control. This complication has taught me that meticulous hemostasis of white matter feeders (especially the lenticulostriate perforators to frontal and basal ganglia AVMs, insular perforators to insular AVMs, and thalamoperforators to thalamic AVMs) cannot be underestimated. A sizable segment of these white matter feeders must be available for their complete obliteration. Despite their clip ligation, if enough segment of the vessel with relatively normal walls is not secured, the incompetent dysplastic segment can rupture later and lead to catastrophe.

Minor bleeding from the nidus may be controlled using gentle coagulation. However, if the bleeding is from a large defect within the nidus, I plug the defect with a small piece of cotton and gentle tamponade. Patience and saline irrigation often control the situation.

Coagulation of large defects enlarges the defect. Moreover, this maneuver can lead to sudden hemodynamic changes with the nidus, and in the presence of live feeding vessels, this can cause more extensive IORs.

Controlling the Bleeding from the AVM Nidus

Very minor injury to the primary vein can be managed with gentle bipolar coagulation to close the defect without scarifying the flow within the lumen of the vein. In addition, a small cottonoid patty and gentle tamponade can be effective.

If I inadvertently tear the vein beyond any chance of repair before the large feeding arteries are encountered and sacrificed, I do not occlude the vein, because this maneuver will lead to sudden AVM rupture and immediate brain swelling. I allow the vein to bleed while I efficiently find the feeding arteries of the nidus and disconnect them while using a large bore suction to clear the field. Smaller feeding vessels are left for later. 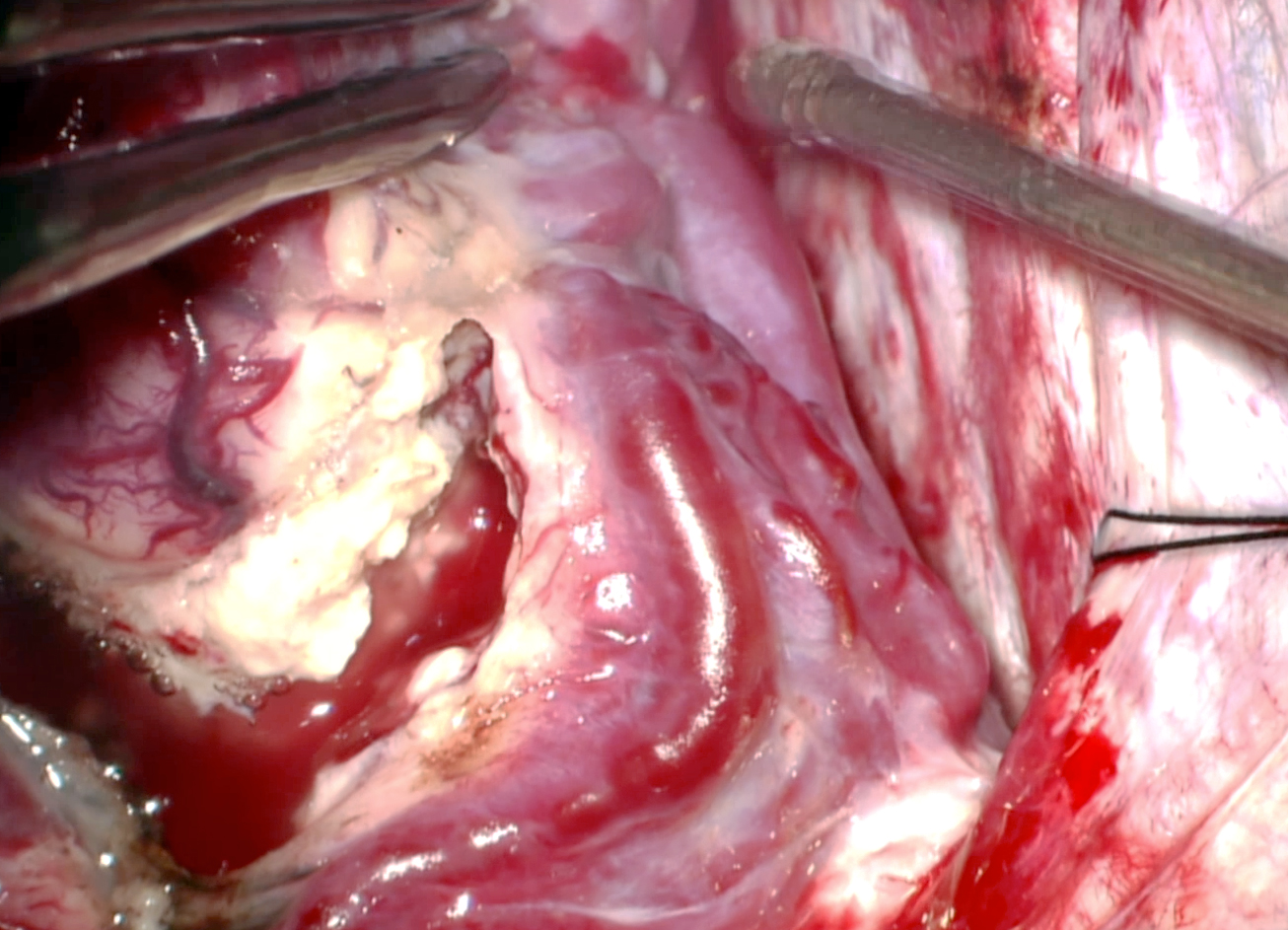 Figure 2: I inadvertently injured the primary vein during coagulation of the nearby feeding arteries (at the tip of bipolar forceps) of this paramedian frontal AVM. The interhemispheric feeders were still untouched at the time of this event. I mistakenly coagulated the primary vein as no other repair option was deemed available. This unfortunate maneuver led to massive rupture of the AVM and torrential bleeding. 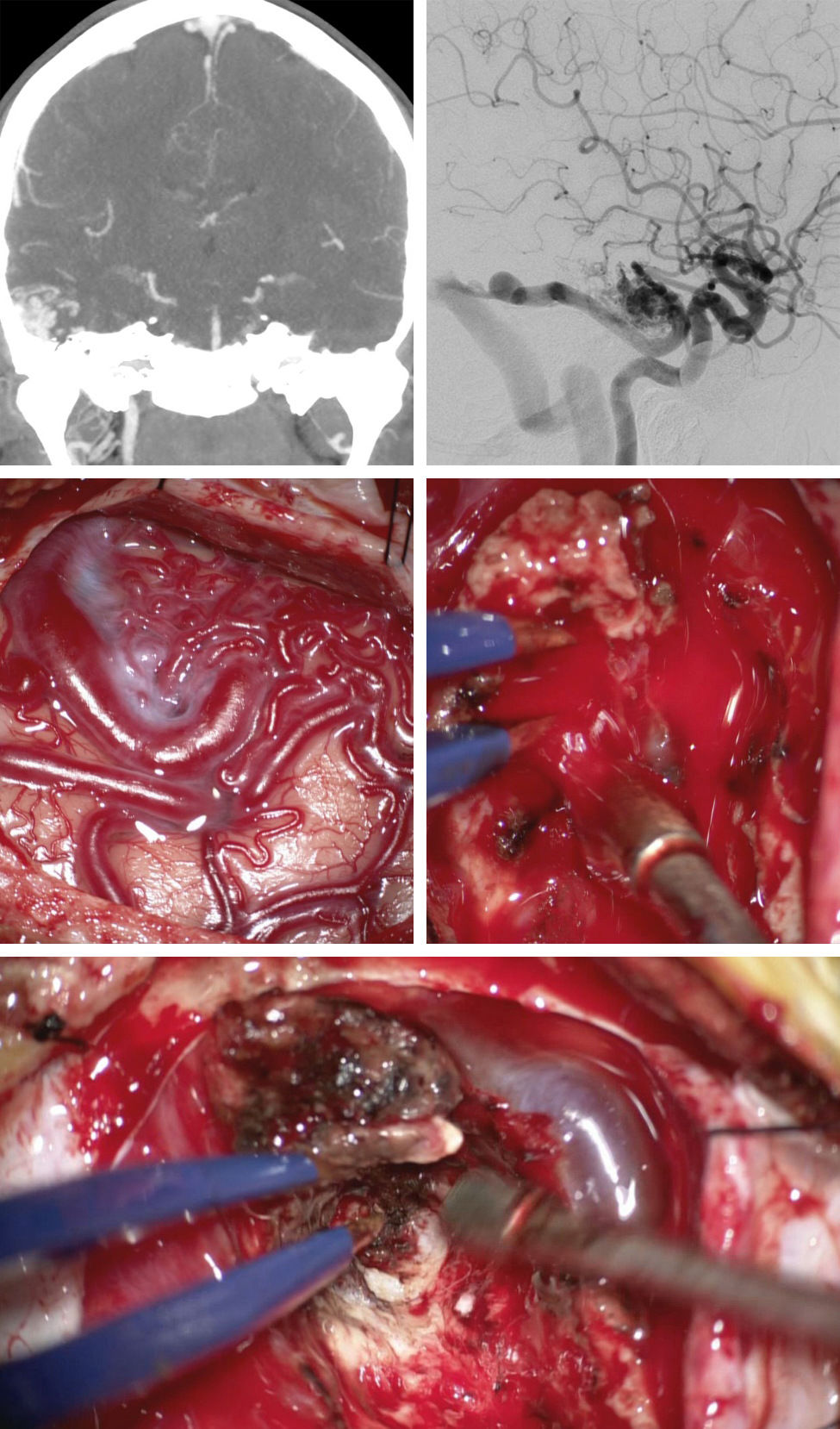 Figure 3: A relatively small lateral temporal AVM associated with an arterialized vein of Labbe underwent resection (first row). The surface anatomy of the AVM is shown; during dissection of the nidus, the dominant draining vein that was wrapping around the nidus was inadvertently injured (second row).  The AVM was removed immediately to avoid excessive bleeding and development of intracerebral hemorrhage (last row). Please see the corresponding video at the beginning of this chapter for subsequent management strategies.

A clear understanding of the three-dimensional pathoanatomy of the dominant feeding arteries is pertinent for their timely exclusion. The mouthpiece of the microscope plays a key role in the chain of events because I can quickly maneuver the scope with no need to use the scope handles. A “commando” operation with the goal of efficiently removing the AVM is necessary, and the surgeon must remain calm, decisive, and in control. Bleeding should not overwhelm the surgeon; it is only bleeding.

Successful execution of the decisive operative maneuvers during IOR is required for the maturity of every AVM surgeon. Moreover, the successful completion of the commando operation augments the confidence of the surgeon for managing complex AVMs.