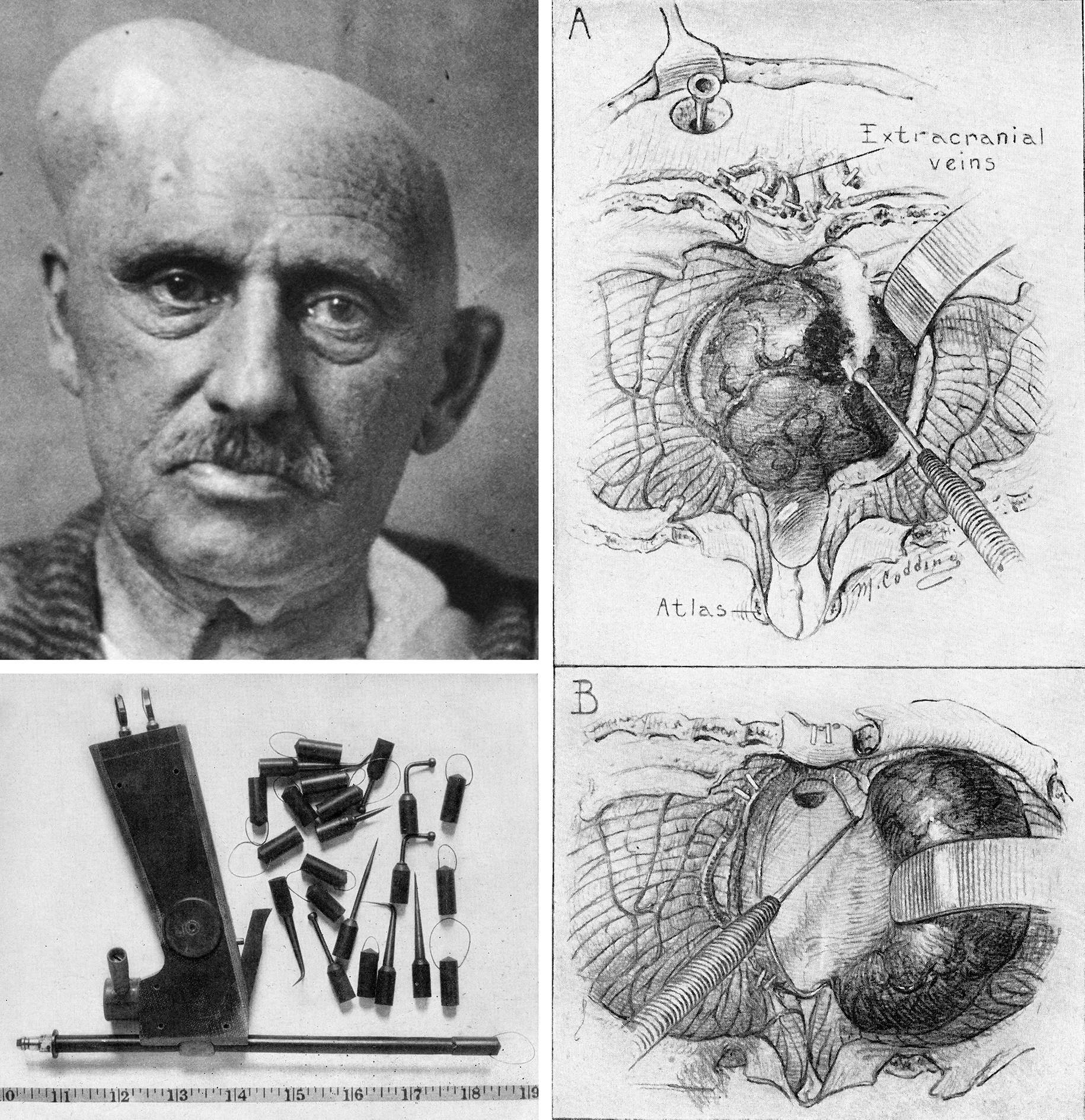 Figure 1: Harvey Cushing introduced Bovie’s electrocautery to neurosurgery. This photograph shows the first of Cushing’s patients who underwent resection of his tumor using this device (left upper image). Cushing demonstrated the use of this instrument (left lower image) for resection of a 4th ventricular tumor (right image)(Images courtesy of the Cushing Brain Tumor Registry at Yale University.)

Successful microsurgery is founded on strict hemostasis and relies on a clear and bloodless operative field. Furthermore, the efficiency of the operation depends on high visibility and a nonobscured environment where the surgeon’s operative workflow is not frequently interrupted by attempts to clear blood from the field. One of the most common reasons for long operative sessions is lengthy perpetual attempts at controlling bleeding, a situation caused by poor operative planning.

Hemostasis is best secured through well-devised resection maneuvers (devascularizing the base of the tumor or interrupting its vascular pedicle early in the operation) and the use of surgical corridors that minimize pial invasion. Natural interhemispheric planes and arachnoid planes provide an opportunity for cerebral protection and avoidance of intraoperative “oozing.” Aggressive retraction using fixed retractors should be avoided because it leads to brain congestion and excessive venous bleeding. Unfortunately, this phenomenon is under-recognized.

Aggressive application of suction on brain surfaces also leads to pial injury and constant oozing. Constant low-flow irrigation will clear the field, avoid the need for forceful suctioning, and prevents heat injury to tissues from the intense light of the microscope—it should be used generously.

Slow drainage of blood from the epidural space into the deep operative field is a nuisance and can significantly impede intradural work. Before opening the dura, immaculate scalp, bone, epidural, and dural hemostasis is crucial. The area of the pterion can be especially problematic and deserves special attention. In this area, since the dura is stripped away from the bone, the small torn intradiploic veins can lead to slow bleeding. Thrombin-soaked Gelfoam powder can readily plug the tiny bleeding points in the bone.

Aggressive dural mobilization away from the inner skull bone and beyond the craniotomy edges can complicate epidural bleeding and postoperative hematoma formation. I routinely place two or three tack-up stiches to ameliorate this source of venous bleeding.

Monopolar (Bovie) Coagulation: This traditional mode of cautery is seldom used in microsurgery except during craniotomies. It is effective for dissecting muscle and fascial planes, but the indiscriminate mode of this cautery limits its use intradurally.

I have used monopolar cautery to devascularize the bony and dural attachments of superficial meningiomas, hemangioblastomas, and hemangiopericytomas. I have even tried using this method within the posterior fossa along the petrous dura to stop bleeding from the base of a giant glomus jugulare. Bovie loop electrodes can be effective with giant meningiomas, but they often char quickly, so their use is limited.

The use of monopolar cautery must be avoided in patients with pacemakers because the electrical current of the cautery can interfere with pacemaker activity.

Bipolar Coagulation: This device produces more pinpoint-precise coagulation of the tissues bounded by the two tips of the forceps. I also use the spring action of the bipolar forceps with sharp tips for gentle dissection of the arachnoid membranes. These advantages make the fine-tipped bipolar forceps the most practical, adaptable, and multifunctional instrument in microsurgery.

It is important that the surgeon understand the advantages and limitations of the bipolar forceps. When used effectively, this instrument can be used in place of multiple other tools, such as microscissors, fine dissectors, and fixed retractors. Judicious and discreet use of bipolar forceps as a multifunctional instrument can avoid the unnecessary exchange of other instruments, therefore enhancing operative efficiency.

During Sylvian fissure split, the spring action of the sharp tips of the forceps can sharply dissect, mobilize, and gently avulse the thin arachnoid membranes among the frontotemporal opercula. Forceful blunt dissection of thick arachnoid membranes or adherent pial surfaces must be avoided and microscissors used instead. The “closed” tip of forceps may also be used in place of fine dissectors to gently mobilize the Sylvian arteries. Importantly, the fine tips of the forceps can grab the encasing arachnoid membranes of the cranial nerves and displace them away from the tumor capsule, without manipulating the sensitive nerves themselves.

Charring at the tips of the forceps leads to ineffective coagulation. The forceps should not be completely approximated for smooth coagulation. Instead, a small amount of tissue should be left between the tips for the coagulation function to work effectively. High currents lead to charring and avulsion injury to the surrounding tissues with no hemostatic result. Irrigation at the tips can minimize charring and dissipation of heat.

The most common error in using bipolar cautery is indiscriminate coagulation of the bleeding source along the cortex by the forceps. This method leads to further cortical injury and increased bleeding. Instead, controlled irrigation should be used to clearly pinpoint the exact source; correct application of the forceps along the axis of the source can provide hemostasis while protecting the neighboring neurovascular structures from heat injury.

Slow bleeding/ooze from the cortex can be more effectively managed by using small pieces of wet cotton and the tamponade technique. Similarly, if a small perforator is inadvertently avulsed from its parent artery, coagulation is not used and a small piece of cotton tamponade will give natural hemostatic mechanisms an opportunity to plug the defect in the wall without placing the parent artery at risk.

Silver/Weck clips may be used for ligation of large vessels and dural veins (occipital or superior petrosal sinuses), but their application in microsurgery is very limited.

Bone wax is used to seal bleeding from the bone. It may also used for obliteration of the air sinuses to avoid cerebrospinal fluid leaks. This wax can be mixed with Gelfoam powder or Surgicel fibrillar to plug bleeding from the foramen spinosum.

This form of coagulation can be very effective in microsurgery for managing venous bleeding. 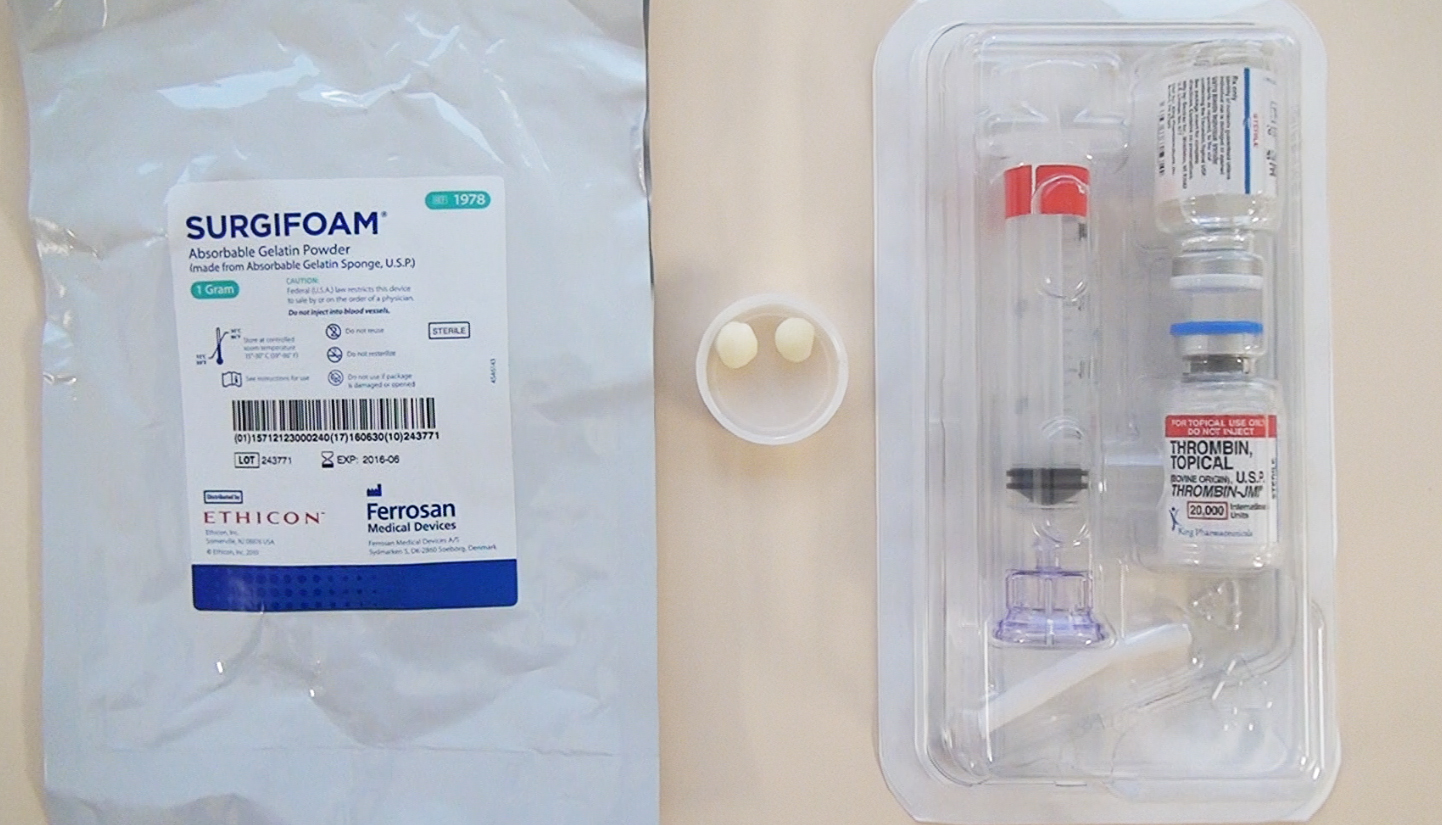 Figure 2: Gelfoam powder or Surgifoam (Somerville, NJ)(left) soaked in thrombin solution (right) and gathered in small spheres (middle) is effective for hemostasis in situations when venous bleeding is problematic. Its soft texture and fine particles can seal small low-pressure hemorrhagic venous channels around the epidural space effectively. It should not be used to pack the lumen of venous sinuses as this may lead to dural venous sinus thrombosis.

This thrombin solution alone may be used to irrigate the operative field. Slow venous oozing after glioma resection is responsive to this hemostatic maneuver. I have not seen any untoward side effects from using the irrigation of thrombin solution even within the ventricular spaces.

Bipolar coagulation is traditionally thought to be the sole mode of hemostasis for arterial bleeding during microsurgery. Depending on the importance of the artery and its caliber, primary closure of the tear is ideal, if possible. 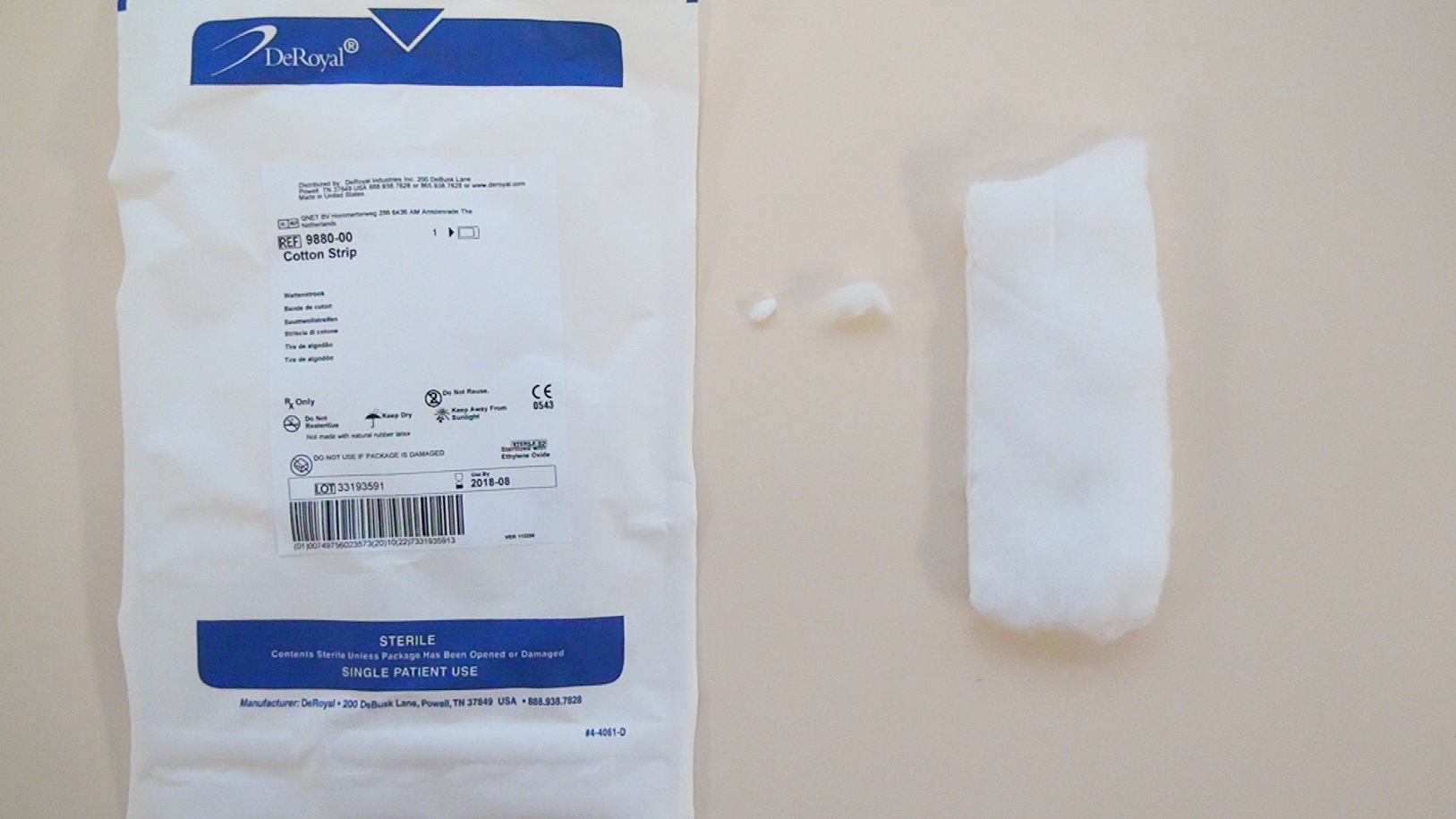 Figure 3: If a small tear or perforator avulsion injury is the source of bleeding from an indispensable parent artery, small cotton pledges (middle) can be used to cover the small tear. Gentle tamponade allows an opportunity for the patient’s hemostatic cascade to deposit enough clot to seal the small defect. This maneuver can prevent sacrifice of the vital parent vessel and has been life-saving in some occasions for my patients. The small cotton pledget can be left behind at the end of the operation. Impatient use of bipolar coagulation in this case can lead to irreversible injury to the parent vessel.

Bleeding from a Dural Venous Sinus

The size of the tear in the venous sinus wall determines the course of action to secure hemostasis and preserve the venous lumen.

Large tears are ideally managed through primary closure using fine sutures. However, this is usually not feasible and the closure must be reinforced with a piece of pericranium or muscle. Alternatively, the dura can be reflected over the tear and used to reconstruct the roof of the venous sinus. Please refer to the chapter on Repair of the Dural Venous Sinus Injury for more details.

Excessive bleeding from the cavernous sinus can be controlled using injections of fibrin glue. 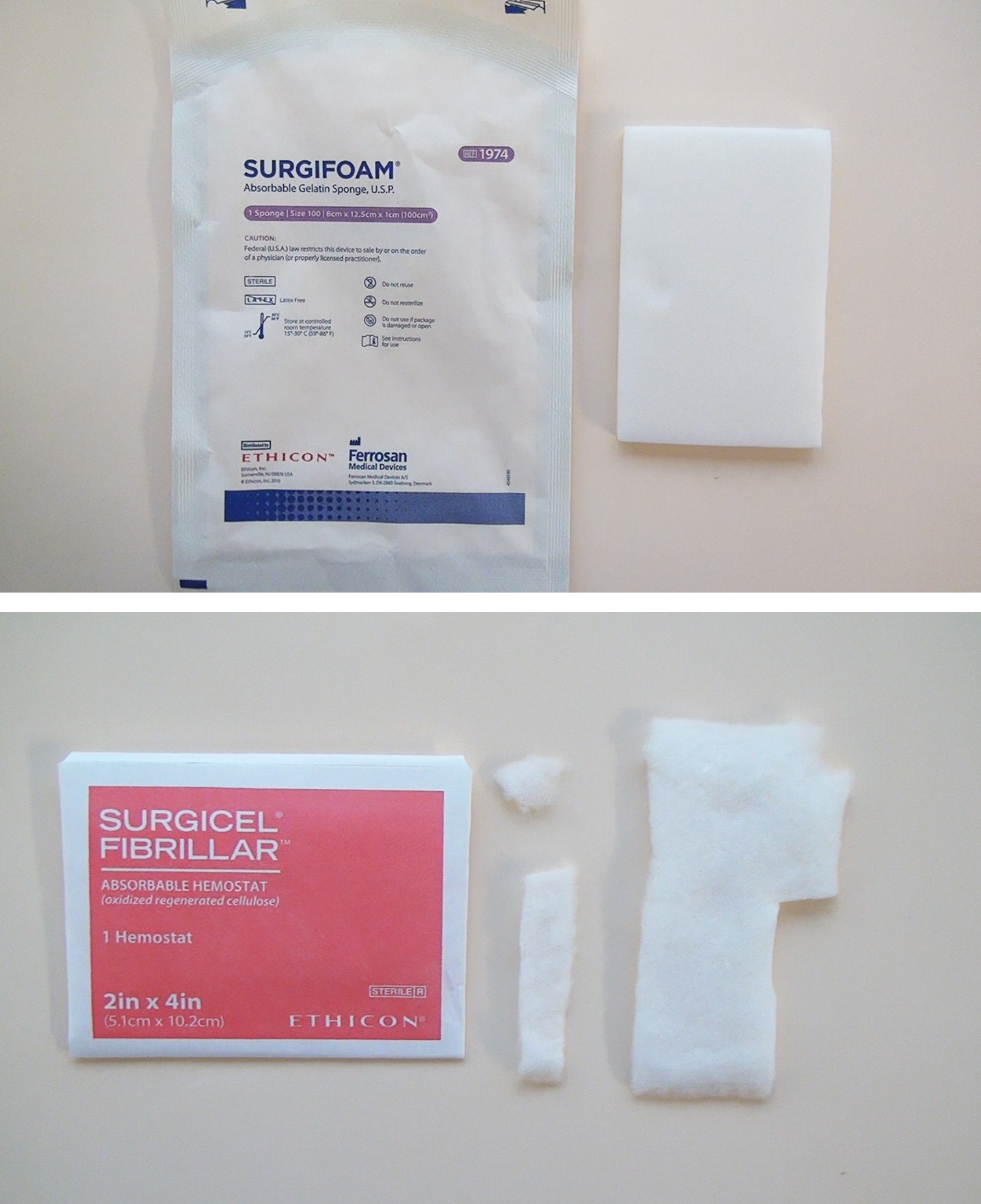 Figure 4: Small tears in the walls of the venous sinuses can be controlled using a small piece of Gelfoam sponge (top image) or Surgical fibrillar (bottom image) overlaid over the small defect. This material is not inserted in the lumen. The sponge is left in place and acts as a scaffolding surface for the patient’s own hemostatic cascade.

Severe closed head injury or excessive bleeding and massive blood replacement can lead to uncontrollable diffuse venous bleeding due to alterations in hemostatic mechanisms. This emergency requires an assessment of the patient’s global hemostatic parameters. Thrombin-soaked Gelfoam powder can be effective transiently. Correction of the underlying cause of disseminated intravascular coagulation (DIC) is the best strategy. When diffuse venous bleeding occurs, it is often best to abort the procedure immediately and return a week or two later for the second stage of the operation.