Arteriovenous malformations (AVMs) in pediatric patients are distinctly different from AVMs that present in adults. Pediatric AVMs are theorized to arise during embryogenesis due to genetic aberration and failure of differentiation of the vascular precursors.

This aberration is believed to occur during the third week of embryogenesis. However, this theory of pathogenesis is debated because of the known development of de novo AVMs and recurrence of AVMs following complete their removal as evidenced on angiography. These findings highlight the need for more basic science investigations into the pathogenesis, natural history, and epidemiology of these lesions. 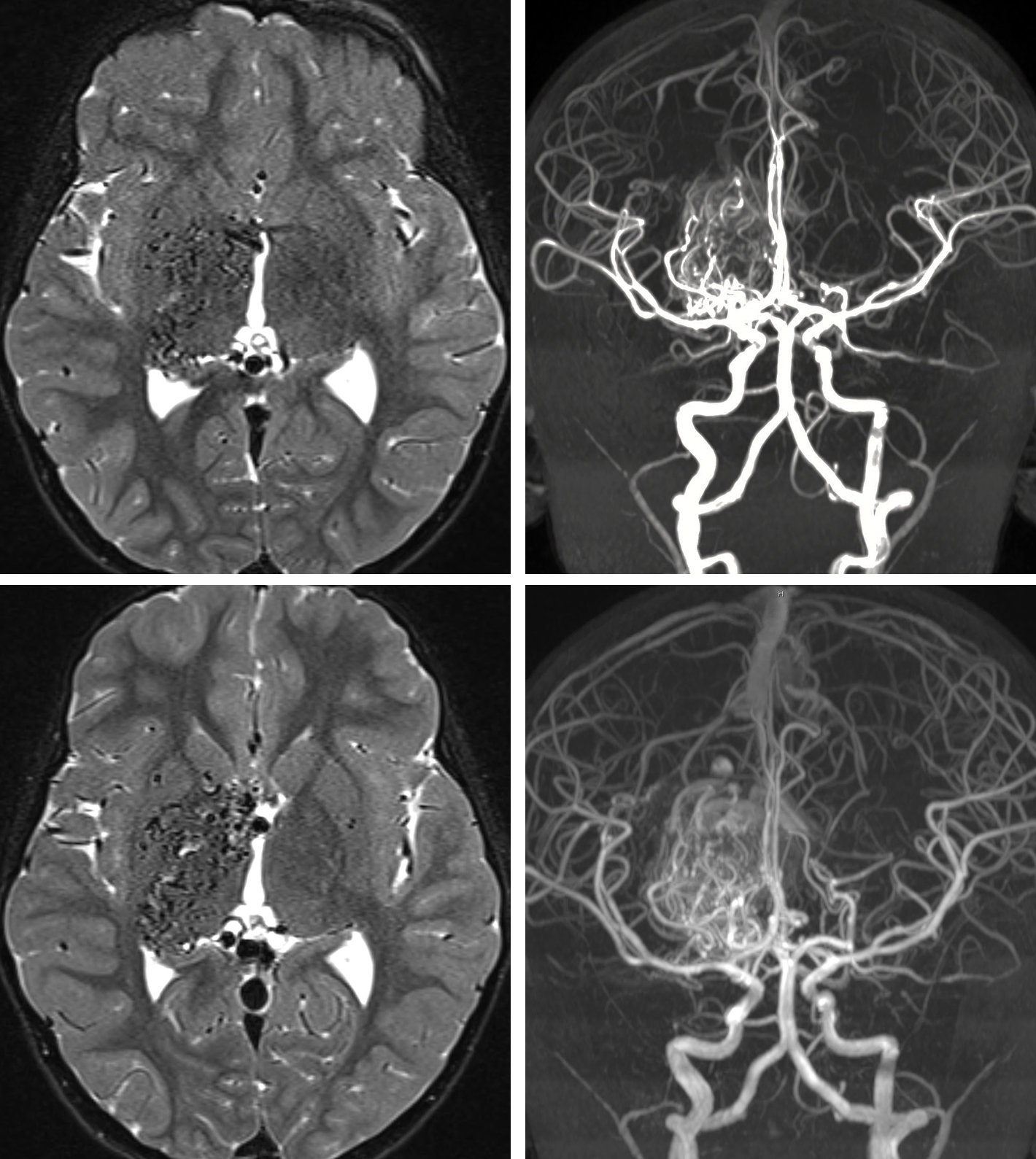 Figure 1: This 6 year-old boy demonstrated evolution and enlargement of his deep AVM within 2 years during follow-up. This case emphasizes the dynamic nature of pediatric AVMs. The top and bottom row MR images were obtained at 4 and 6 years of age, respectively. 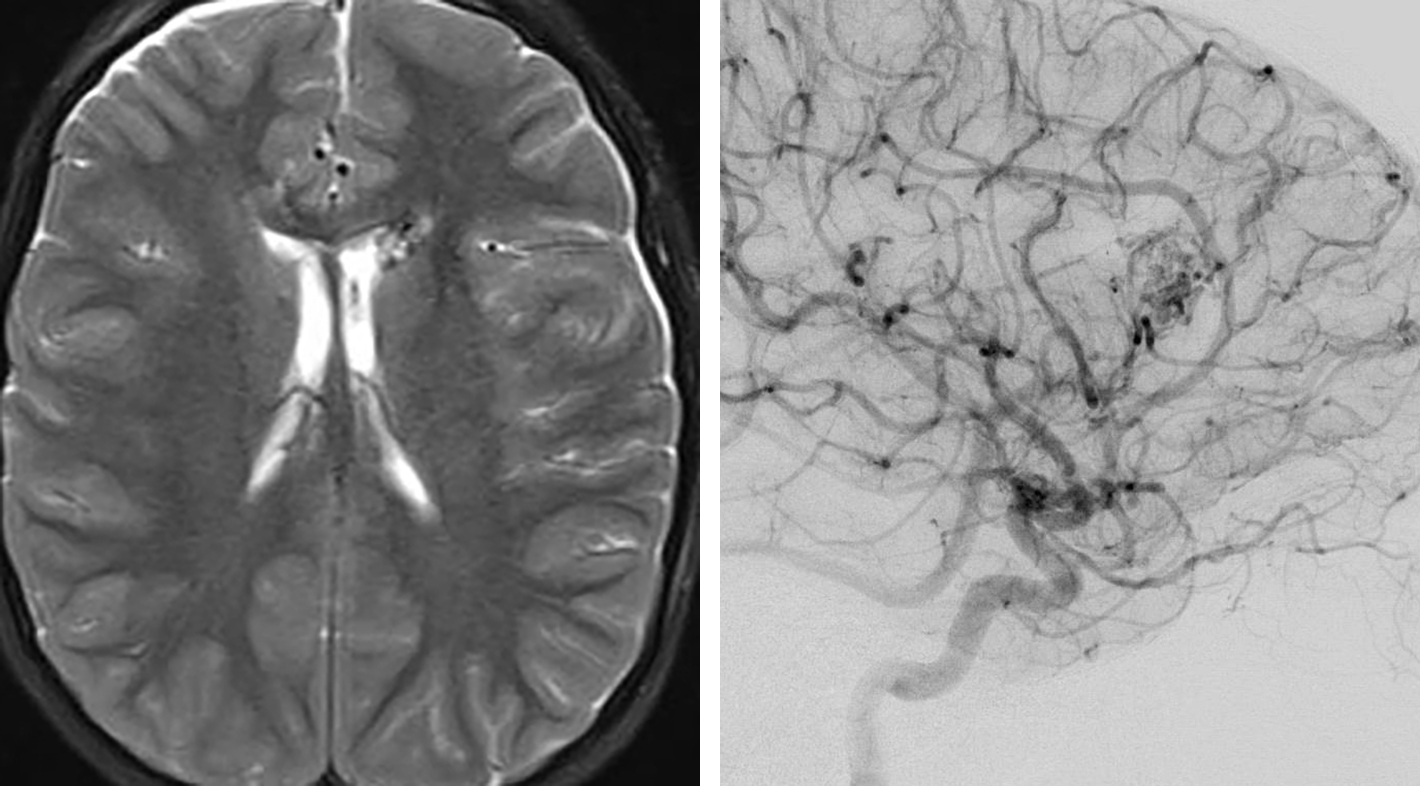 Figure 2: This 14-year-old boy had undergone angiographically proven complete resection of his callosal AVM a decade earlier. He presented with a recurrence near the area of previous resection and underwent a repeat resection. Please note the rather diffuse angioarchitecture of this AVM, characteristic of some immature pediatric AVMs.

Cerebral AVMs in pediatric patients are commonly related to intracranial hemorrhage with reported rates of 60 to 85%. However, it has not been clearly demonstrated that hemorrhage rates are higher for children and teenagers with AVMs because it is difficult to establish the prevalence of this disease in the pediatric population. Based on retrospective analysis, the risk for hemorrhage has been reported to range from 2 to 10% per year.

There are many theories about the etiology of this seemingly elevated risk for hemorrhage from AVMs in children compared with adults. Pediatric patients possess a developing cerebrovasculature system that carries an enhanced risk of rupture. Some series reported in the literature have demonstrated an elevated risk of AVM hemorrhage in inverse correlation with AVM size. This suggests that the often small AVMs found in pediatric patients may rupture with greater frequency. Some researchers have theorized that autoregulation of the cerebrovascular flow is impaired in a developing child’s brain, imparting unfavorable hemodynamic parameters.

As with adults, the principles of eloquent cortical involvement, deep venous drainage, and nidal diffusivity should be considered when deciding on the appropriate use of microsurgical management.

The patient should be typed and crossed for packed red blood cells, platelets, and fresh frozen plasma before the intervention to ensure rapid response to unanticipated hemorrhage. The anesthesia team should be vigilant for potential for hemodynamic instability of the patient, given the risk of significant blood loss during AVM manipulation. Placement of a central line for high-volume resuscitation is recommended for select patients.

Hemodynamic complications are particularly concerning in children given their smaller effective circulatory volume compared with adults, resulting in the risk of a rapid development of hemorrhagic shock. In rare cases, this hemodynamic instability may be significant enough to warrant cessation of the surgical procedure.

Please refer to the chapter on Nuances of AVM Resection for my personal philosophy on managing these lesions.

I believe surgery should be conducted during the acute phase of hemorrhage on patients who present with a ruptured AVM and who are in good neurologic condition. This allows the patient to recover from both the temporary consequences of the hemorrhage and the surgery simultaneously.

An acute hemorrhage provides reasonable dissection planes, but chronic gliosis from a previous hemorrhage can potentially be more challenging to treat. Furthermore, acute evacuation of the clot and AVM often facilitates faster recovery from the mass effect of the intracerebral hemorrhage. However, if acute cerebral edema results from AVM rupture and causes neurologic decline, surgical care should be delayed. Edematous brain tissue is friable and vulnerable to injurious operative maneuvers.

As mentioned above, pediatric AVMs are quite different from those in adults. They are frequently immature and partly diffuse AVMs whose borders are not easily identifiable, even on a preoperative angiogram. These diffuse lesions have a substantial risk of recurrence, even after an angiographically-proven gross total resection. I have faced at least two cases when the post-resection intraoperative angiogram confirmed gross total resection of a pediatric AVM, but the postoperative angiogram revealed a newly identified small, early-draining vein, slightly farther away from the resection cavity. An aggressive approach to these “minor residual” arteriovenous shunts may not be warranted, even though their natural history is not clearly defined. 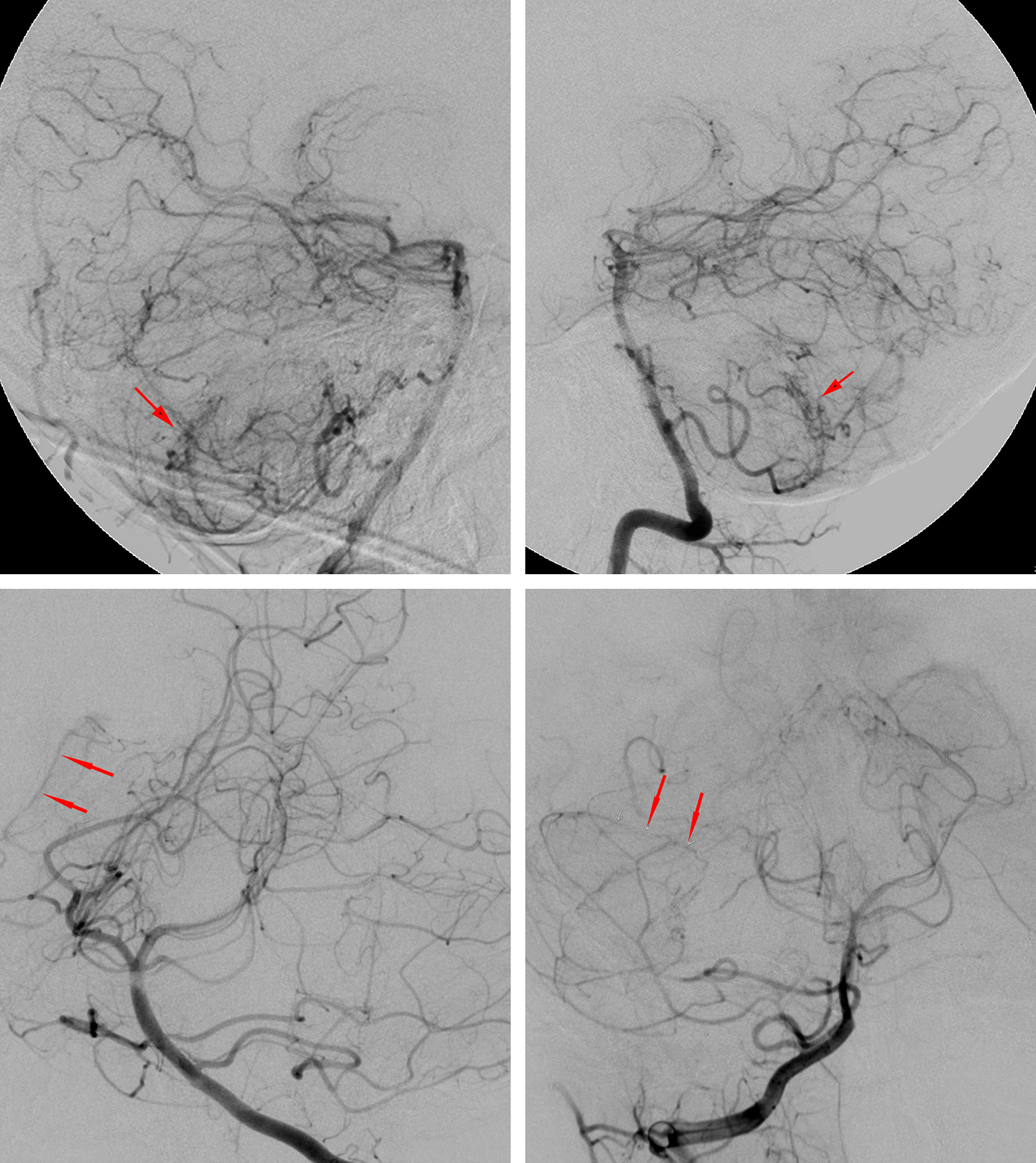 Embolization, as in the management of adult AVMs, has a demonstrated role for curative embolization of smaller lesions, preoperative reduction in nidus vascularity, and combination therapy as pre-radiosurgical partial embolization.

After preoperative embolization, the reduced vascularity of the nidus can simplify surgical intervention and eliminate the need to access deep feeding vessels that may not be easily accessible during the early phases of the operation (that is, superior cerebellar artery feeders during resection of a tentorial AVM).

In spite of this, I do not routinely embolize AVMs before surgery. In fact, I believe embolization of cortical pedicles (often easily managed during surgery) leads to an increase in the functional role of daunting white-matter perforators. This phenomenon is based on the principle that each AVM will persist in its role of arteriovenous shunting. If the large pedicles are lost, the AVM will find a way to shunt through the white matter feeders that are often inaccessible for embolization.

However, selective embolization of some of the arterial pedicles is advised if these pedicles are not easily accessible early in surgery (that is, P2 feeders). The surgeon should leave the accessible pedicles alone to avoid the AVM’s proliferation of white matter feeders. Therefore, it is important that the neurosurgeon and the endovascular interventionist communicate fully to plan for the embolization.

The principles of AVM resection in pediatric patients are similar to those in adult patients. For a detailed discussion of these principles, please refer to the Nuances in AVM Resection chapter. Blood loss must be carefully monitored and minimized during surgery; it is easy for the surgeon to be focused on microsurgery and miss significant volume blood loss.

Complete resection of the AVM, as evidenced by postoperative digital subtraction angiography, is the gold standard of cure and is paramount to convey protection against future hemorrhage.

Management of pediatric AVMs via radiosurgery has a proven track record. Favorable rates of complete obliteration have been demonstrated, ranging from 51 to 90%. Therefore, radiosurgery provides a viable option if surgical intervention is deemed contraindicated based on nidal eloquence or patient comorbidities.

Despite the initial concerns regarding radiotherapy in children and teenagers, radiosurgery has an overall low rate of reported adverse effects. Permanent complications can occur at a rate of 0 to 18%. Despite these relatively encouraging figures, some surgeons still hesitate to initiate radiosurgical intervention on children and teenagers, given concerns about the unknown long-term side effects of radiotherapy in this population.

Following surgical intervention, pediatric patients should undergo annual surveillance with magnetic resonance angiography for the first 5 years and every 2 to 5 years thereafter. Additionally, at 1 year and 5 years after the procedure, follow-up digital subtraction angiographic evaluations should be performed to definitively exclude any residual or recurrent AVMs.

By definition, a recurrent AVM is a newly identified lesion, found either clinically or radiographically, following complete obliteration of a previous lesion. This phenomenon is exceedingly rare in adults.

Despite complete AVM resection as evidenced by post-procedure angiography, recurrent rates are most frequently reported to be between 1.5 and 5.5% (up to 15% in some series), implicating the need for surveillance imaging. There is significant debate regarding whether these lesions recur due to their de novo appearance within genetically dysplastic vessels or if angiographically occult AVMs become angiographically apparent in a delayed manner. A young patient’s immature cerebrovasculature may also permit angiogenesis and facilitate evolution of the lesion over time.

Regarding duration of surveillance imaging, case reports have been published describing AVM recurrence up to 19 years after complete obliteration. The hemorrhage risk of recurrence necessitates longitudinal clinical observation of these patients.