Posterior Petrosectomy for a Complex Petroclival Meningioma: Nuances of Osteotomy

There are several variations of the posterior transpetrosal approach (posterior petrosectomy or presigmoid approach) that differ in the magnitude of petrous pyramid osteotomy.

The progressive degrees of bone removal of the otic capsule provide some advantages, mostly for gaining further access to the anterolateral brainstem and medial clivus. When combined with a subtemporal approach, the posterior petrosectomy expands the exposure as high as CN IV and as low as the jugular tubercle.

In some cases involving small and soft tumors, conservative petrosectomy followed by aggressive intracapsular tumor decompression provides adequate working angles to reach the anterior brainstem without significant brain retraction. These working angles obviate the need for a more extensive osteotomy as described in the following section.

I believe the extended retrosigmoid route provides a reasonable operative corridor for accessing some petroclival tumors, including epidermoid and soft or small to moderate size meningiomas without supratentorial extension. However, multicompartmental fibrous, vascular, and/or partially calcified petroclival meningiomas with both supratentorial and infratentorial extensions require extended operative angles and space for dissection of neurovascular structures. In these circumstances, the extended petrosal approach is preferred. Figure 1: The progressive level of ventrolateral and ventral brainstem exposure via more radical transpetrosal osteotomies is illustrated. The retrolabyrinthine, translabyrinthine, and transcochlear routes each afford a less obstructed view of the anterior brainstem but also carry higher complication rates and extended operative times as compared to the retrosigmoid approach.

A detailed understanding of the mastoid bone and otic capsule is important for petrous bone drilling. 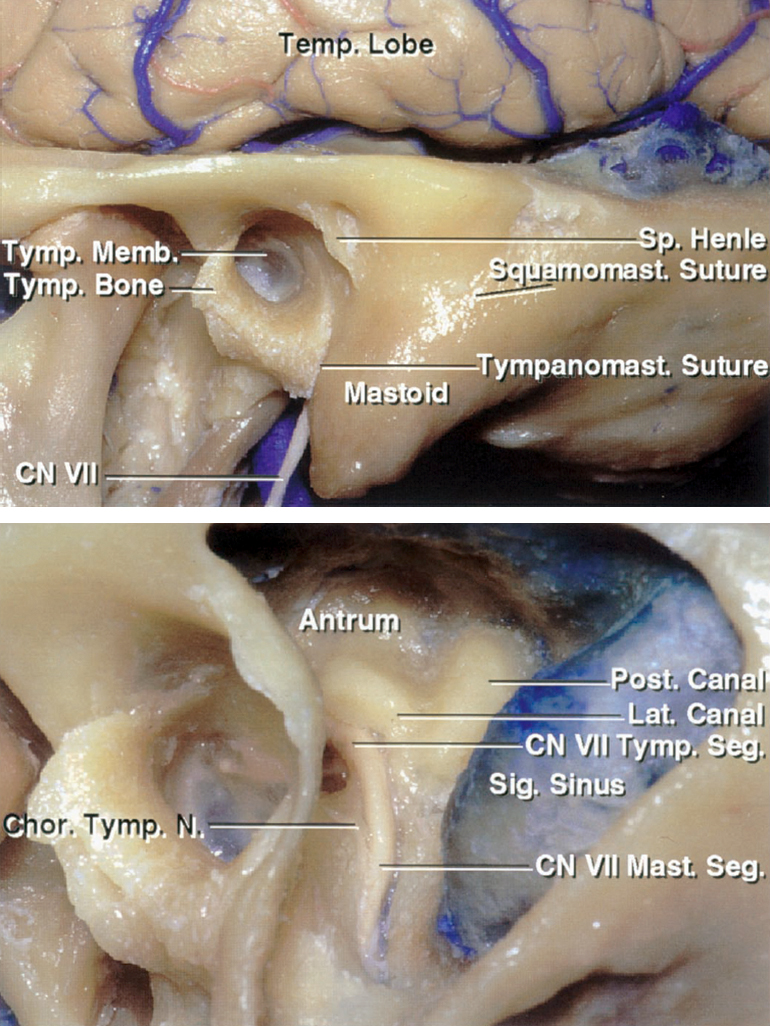 Figure 2: The anatomy of the left mastoid bone is detailed. The exposure of the antrum highlights the location of the lateral canal. The spine of Henle at the posterosuperior margin of the external meatus is a superficial landmark that approximates the deeper lateral semicircular canal and tympanic segment of the facial nerve (upper image). Additional bone drilling and mastoidectomy exposes the capsule of the posterior and lateral canals and the tympanic and mastoid facial segments. This is the extent of bony removal required for an extended posterior petrosectomy (lower image). Skeletonization of the facial nerve is not necessary (images courtesy of AL Rhoton, Jr). 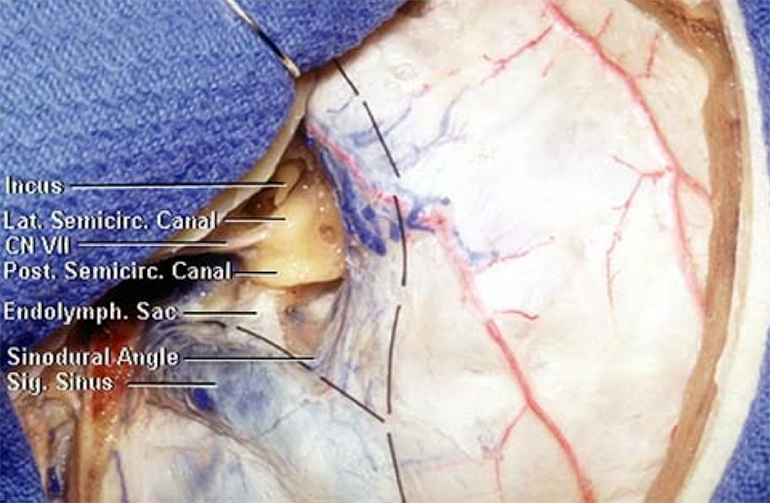 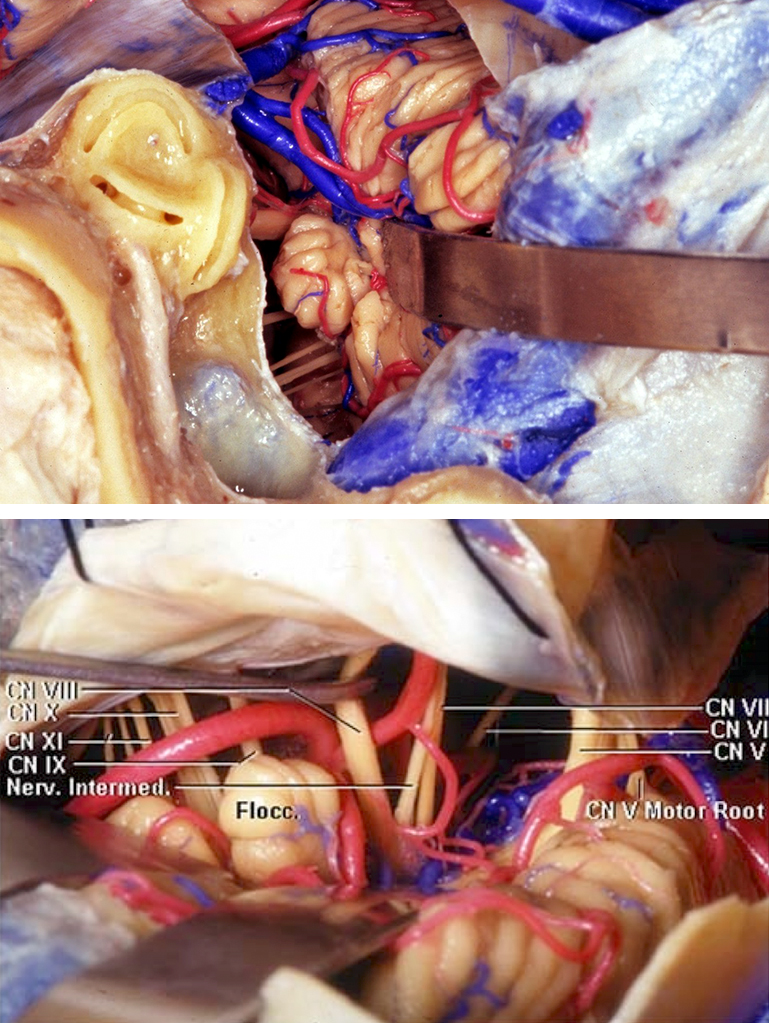 Figure 4: Upon dural opening and gentle retraction of the sigmoid sinus, one can see the operative route toward the cerebellopontine angle (upper image). The expanded view of the relevant cranial nerves is shown (images courtesy of AL Rhoton, Jr).

For the initial steps of this procedure, please refer to the chapter on conservative posterior petrosectomy. 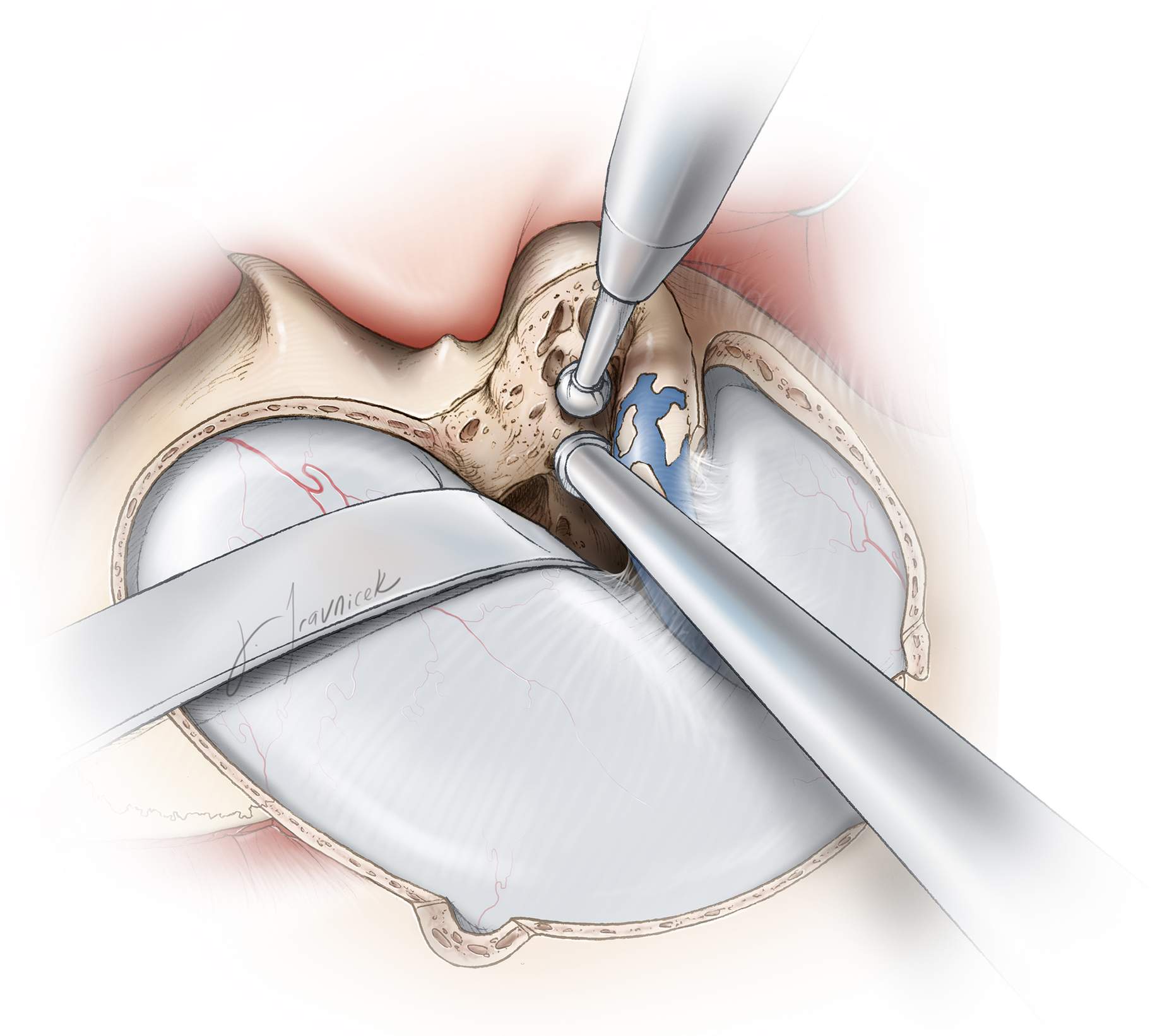 Figure 5: Once the right sigmoid sinus is fully uncovered through mastoidectomy, additional air cells anterior to the sigmoid sinus are removed to expose the dura of the middle and posterior fossae. Small islands of thin adherent cortical bone are left on the sigmoid sinus to minimize injury to this important venous structure. 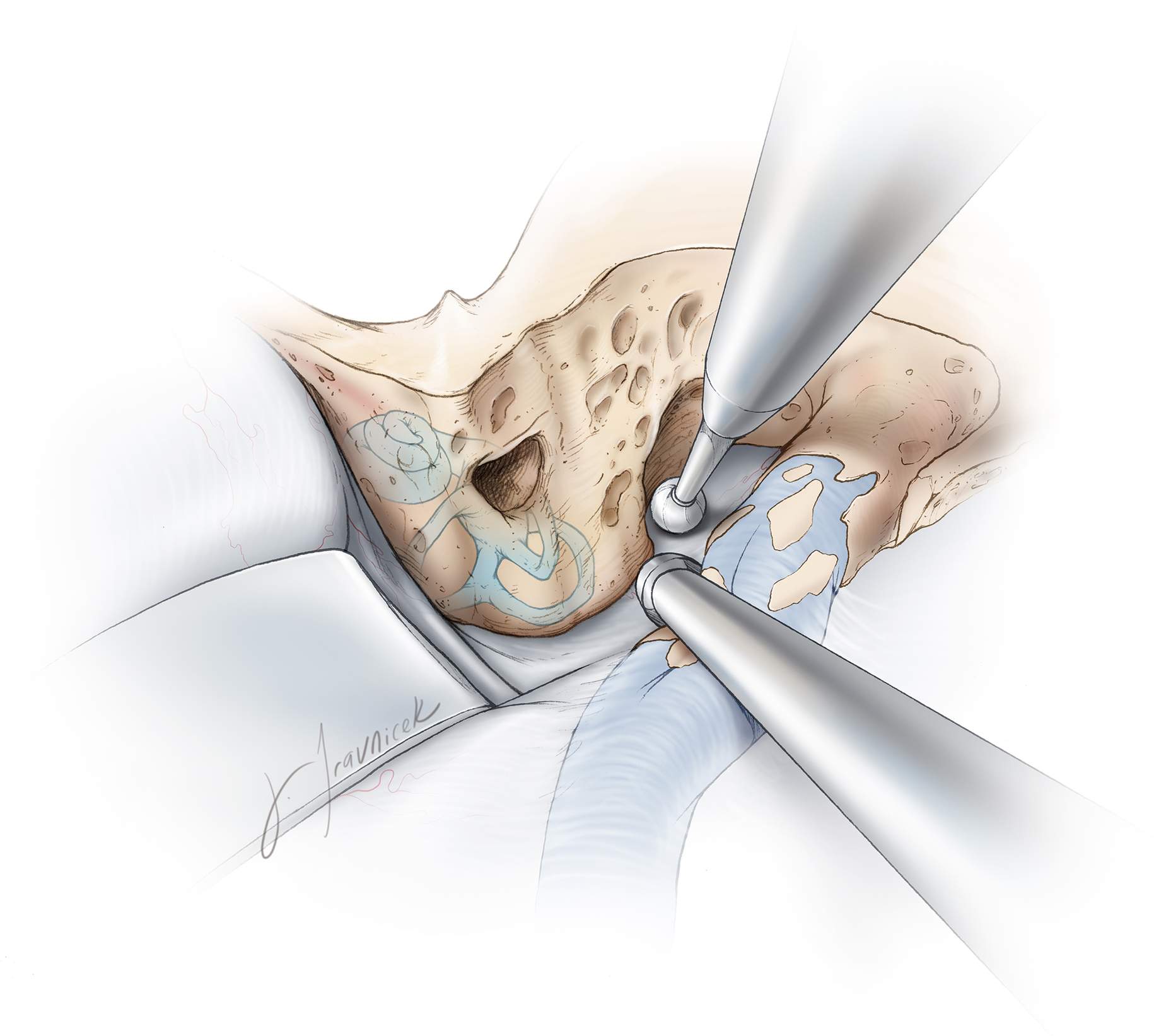 Figure 6: The next step is to identify the antrum by following the middle fossa plate and posterior internal auditory canal wall through the remaining superior mastoid air cells. The antrum is located about 15 mm deep to the spine of Henle; the lateral semicircular canal is located deep to the antrum. In the depth of the antrum, the short process of the incus is identified in the fossa incudis. The burr should not contact the incus because the vibrations can be transmitted to the patient’s inner ear structures and cause hearing loss.

The sigmoid sinus is unroofed inferiorly and the air cells of the mastoid tip are drilled away, exposing the inferior segment of the sigmoid sinus and digastric ridge. The facial nerve courses from the inferior edge of the lateral semicircular canal toward the stylomastoid foramen, located just anterior to the digastric ridge. The facial nerve is embedded in the cortical bone of the fallopian canal. There is no need to skeletonize the facial nerve unless exposure of the jugular foramen is desired.

After the trajectory of the facial nerve has been identified, the positions of the superior and posterior semicircular canals are confirmed through further drilling. These canals are covered by dense cortical bone.

During the retrolabyrinthine approach, hearing preservation is the goal. The bony labyrinth must not be violated. If an accidental disruption of the bone occurs but the membranous labyrinth remains intact, a small amount of bone wax or fascia can be used to cover the defect. However, if both the bony and membranous components of the labyrinth are transected, a small piece of muscle must be inserted in the defect to prevent peri- and endolymph leakage; there is high risk of not only hearing loss, but also vertigo.

The dural opening should maximize the intradural operative trajectory. 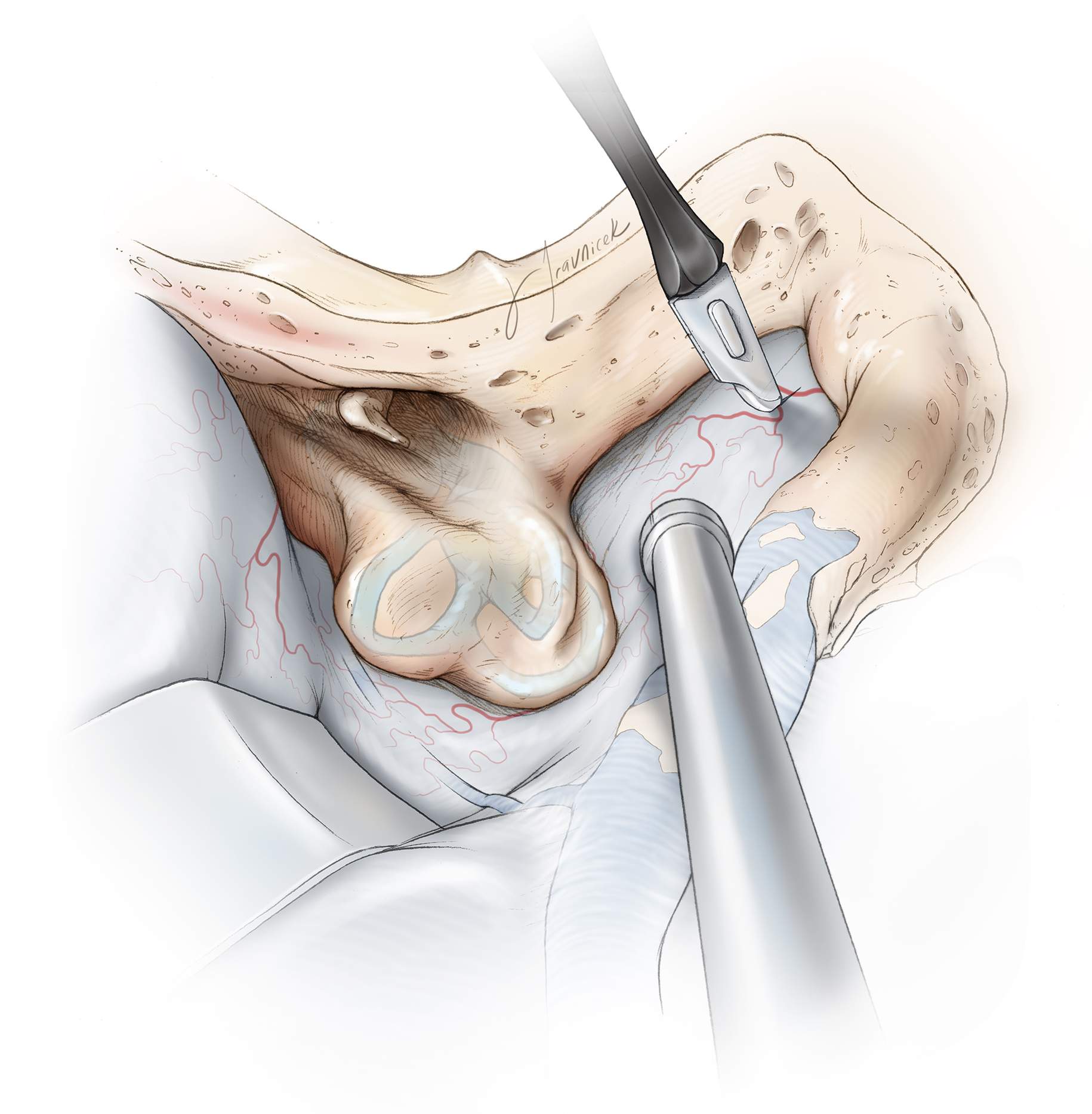 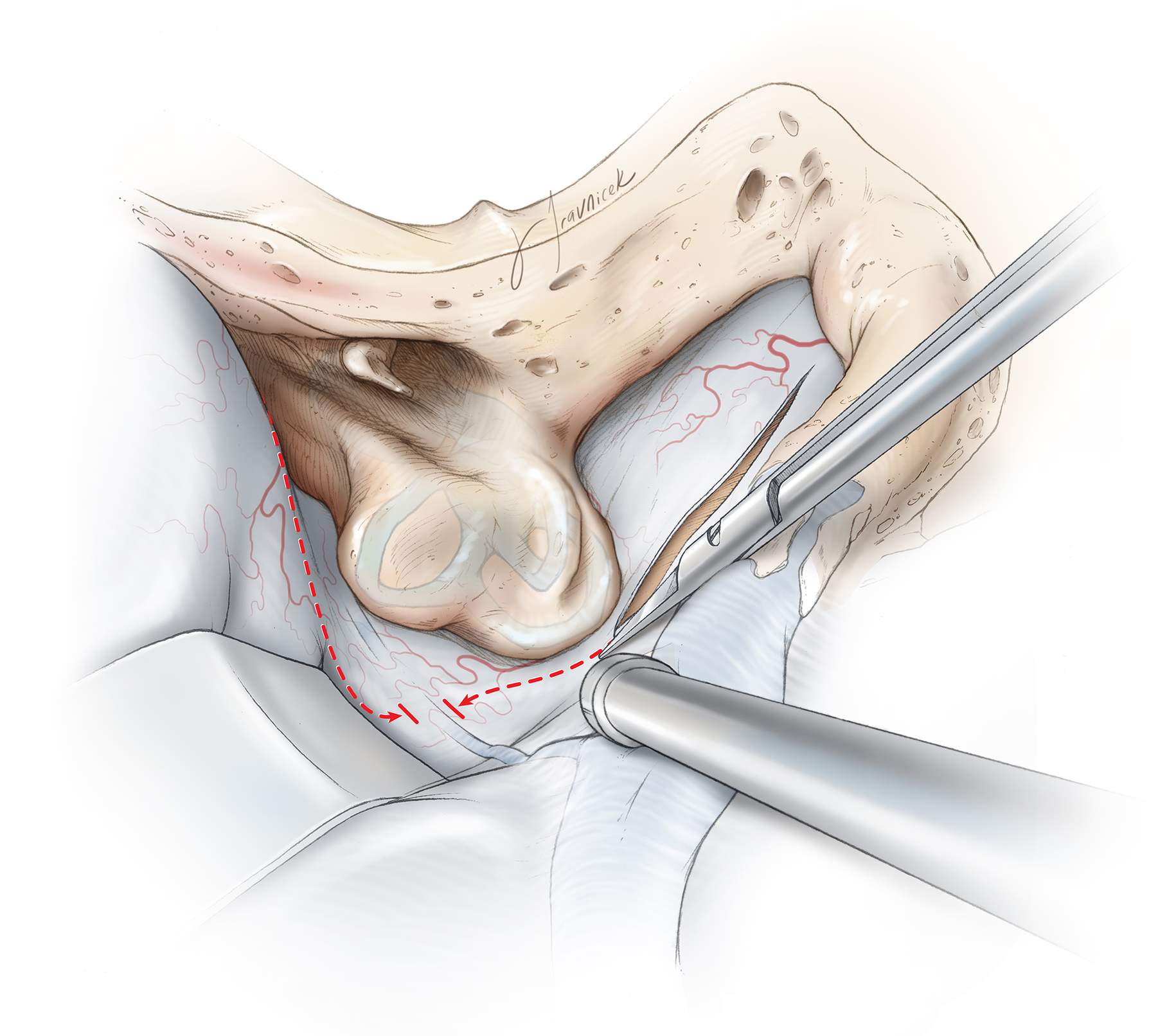 Figure 8: The second segment of the dural incision follows the floor of the temporal fossa and is continued toward the transverse sinus. This opening must be performed carefully and the subdural space should be examined to prevent injury to the wandering vein of Labbé. 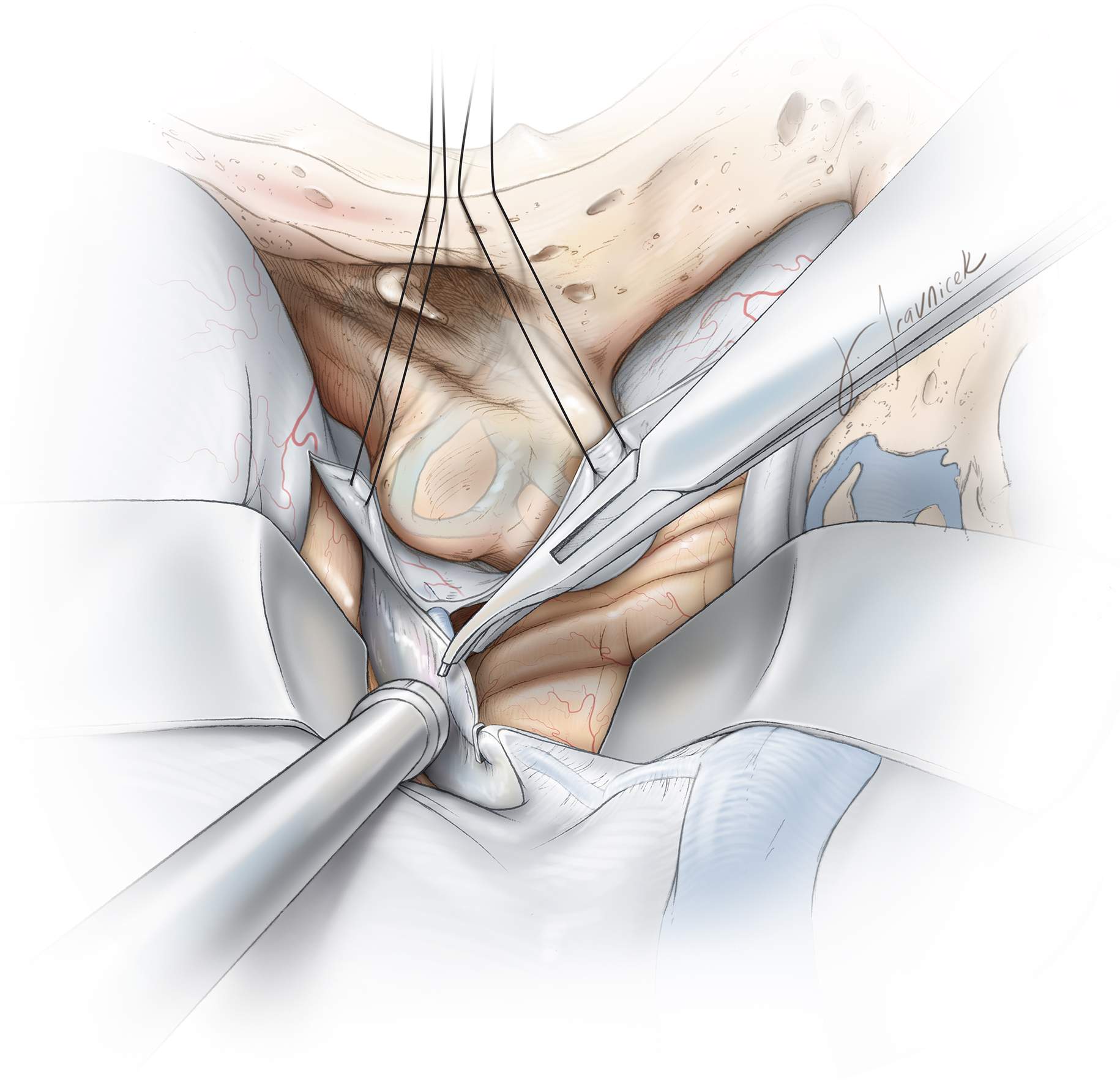 Figure 9: The superior petrosal sinus is now coagulated or ligated with Weck clips. The point where the sinus is divided must be anterior to the insertion point of the main temporal draining veins including the vein of Labbé to preserve their outflow into the transverse-sigmoid sinuses. If the vein of Labbé crosses the area of exposure, it can be partially untethered, mobilized, and protected away from the surgical corridor and retraction vector.

Preoperative assessment of the temporal lobe’s venous drainage patterns and tentorial traversing veins using CT/catheter angiography or magnetic resonance (MR) venography is beneficial in tailoring the safe zones for tentorial transection. If the superior petrosal sinus is intimately involved with the venous drainage of the region, an incision along the tentorium medial to the superior petrosal sinus will spare this sinus and allow an operative corridor, albeit limited, toward the petroclival region around the sinus. 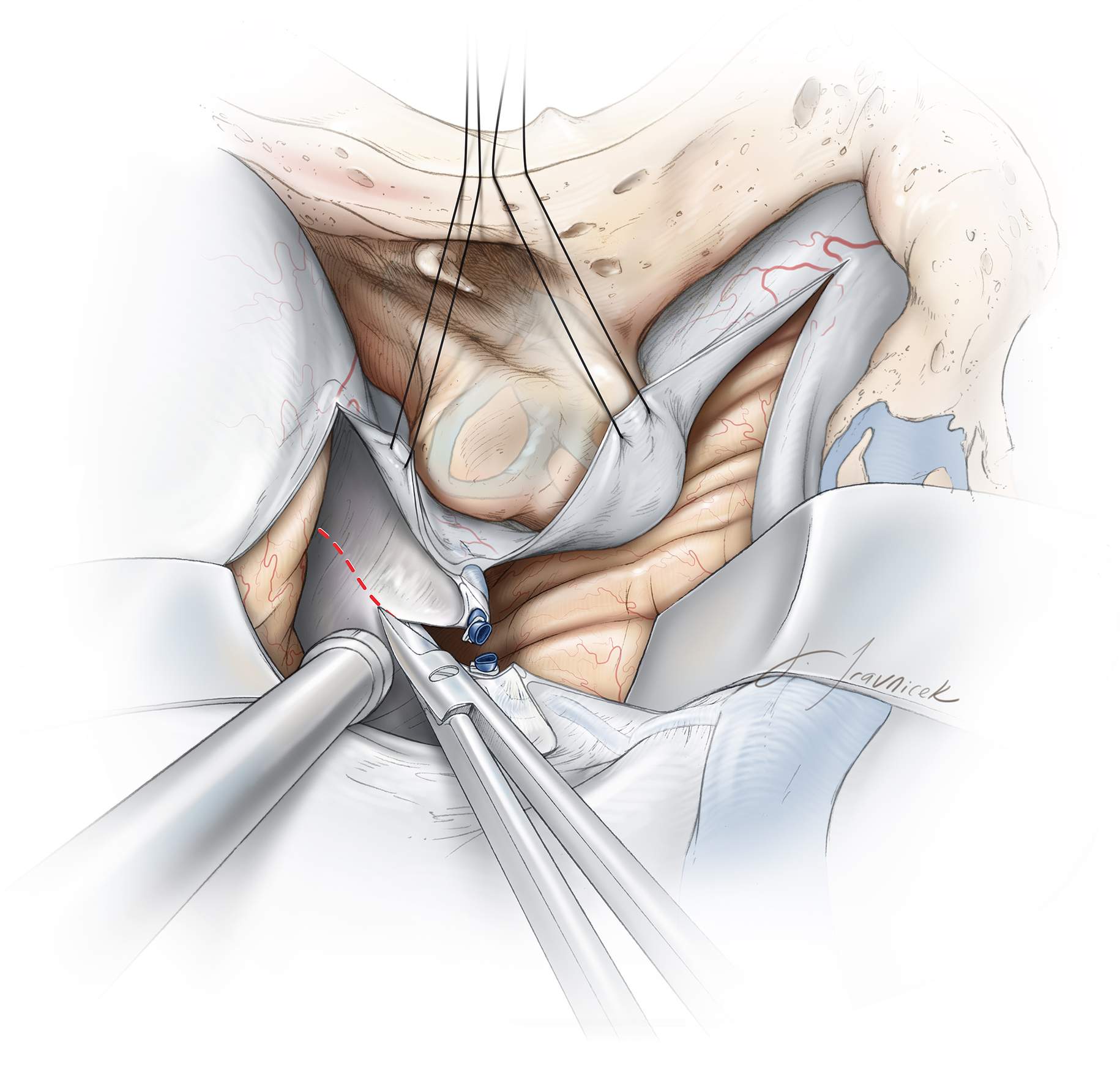 Figure 10: After the superior petrosal sinus is divided, the dural incision is continued on the tentorium parallel to the edge of the petrous pyramid toward the tentorial incisura. Completing the dural incision more posteriorly will lead to a tentorial flap obstructing the surgical corridor. Note the location of the retractor blades and dural retention sutures. 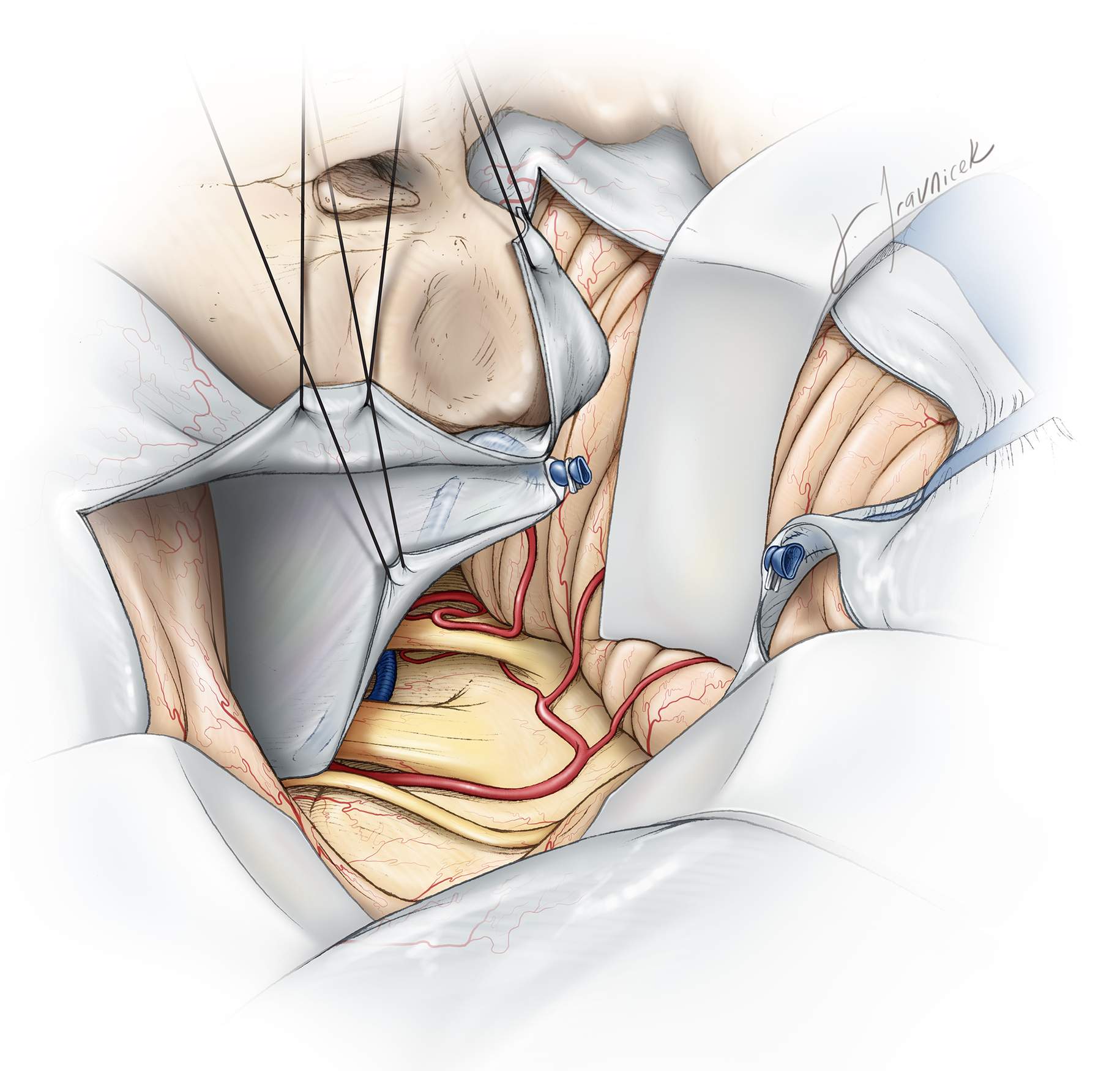 Figure 12: Next, the posterior tentorial flap is elevated with the temporal lobe and held under a retractor blade. Another retractor blade holds the cerebellum in the posterior direction. The presigmoid dura, temporal dura, and tentorium are mobilized using retention sutures. Note that the sutures are placed as deep as possible close to the bony edge to maximize the exposure. Figure 13: Gentle posterior retraction of the sigmoid sinus allows a direct panoramic view of the ventrolateral brainstem and the origin of cranial nerves along the petroclival space.

Following surgical treatment of the pathology at hand, closure begins. The dura is approximated primarily, but “watertight” closure is not feasible and additional measures minimize the risk of postoperative cerebrospinal fluid leakage. All exposed air cells are meticulously waxed and strips of adipose tissue or fascia lata are placed through and over the dural defect to seal the fistula.

Additionally, the vascularized periosteal flap that was harvested during exposure is used to cover and fill the defect in the dura. The bone flap is replaced and secured using miniplates and the rest of closure is conducted in a standard fashion.

The lumbar drain is used to drain 8cc/hour of cerebrospinal fluid for 48 hours after surgery. Patients are mobilized as soon as possible.

For additional illustrations of combined transpetrosal-middle fossa approaches, please refer to the Jackler Atlas by clicking on the image below: 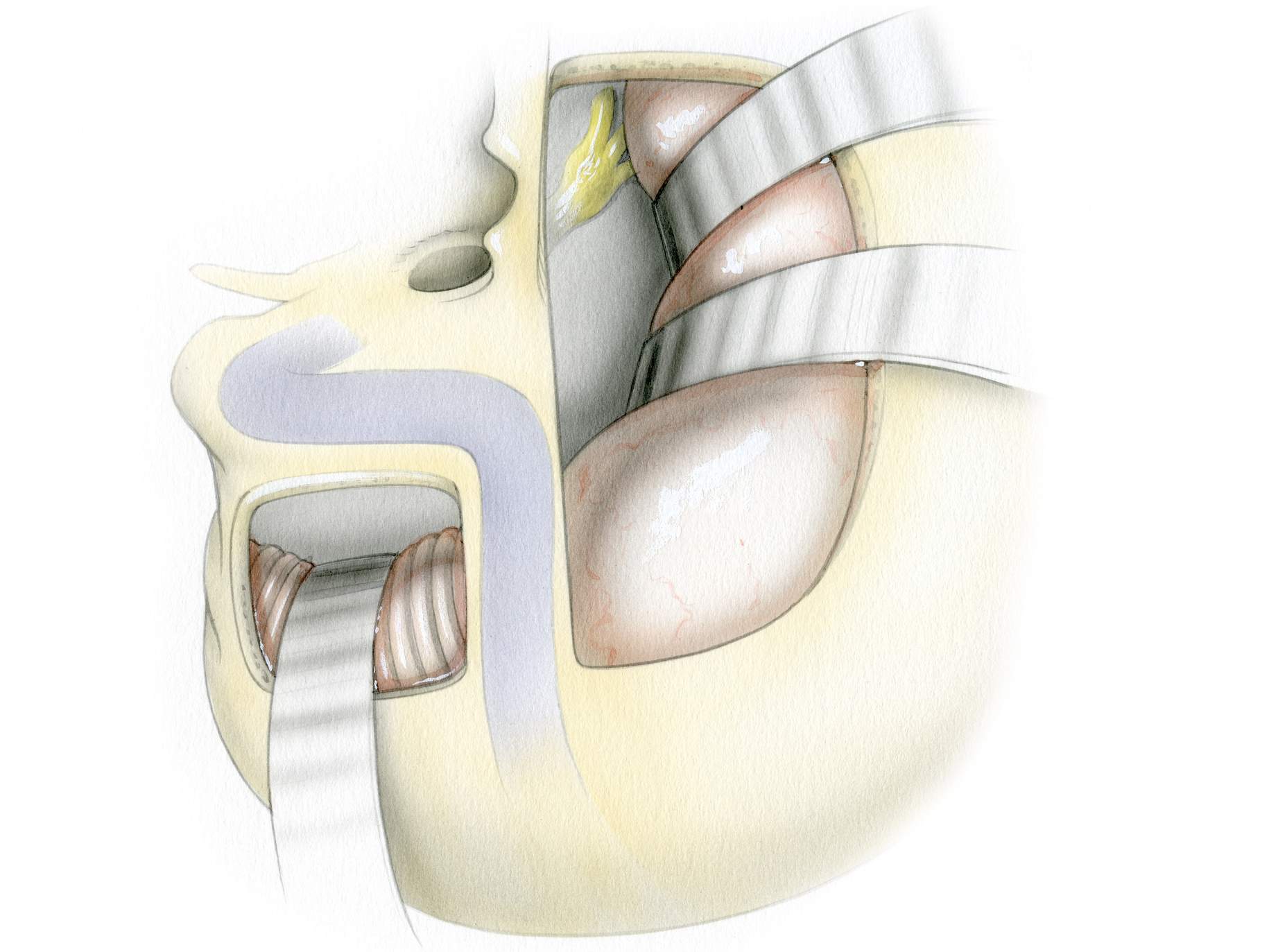 For additional illustrations of jugular foramen approaches, please refer to the Jackler Atlas by clicking on the image below: 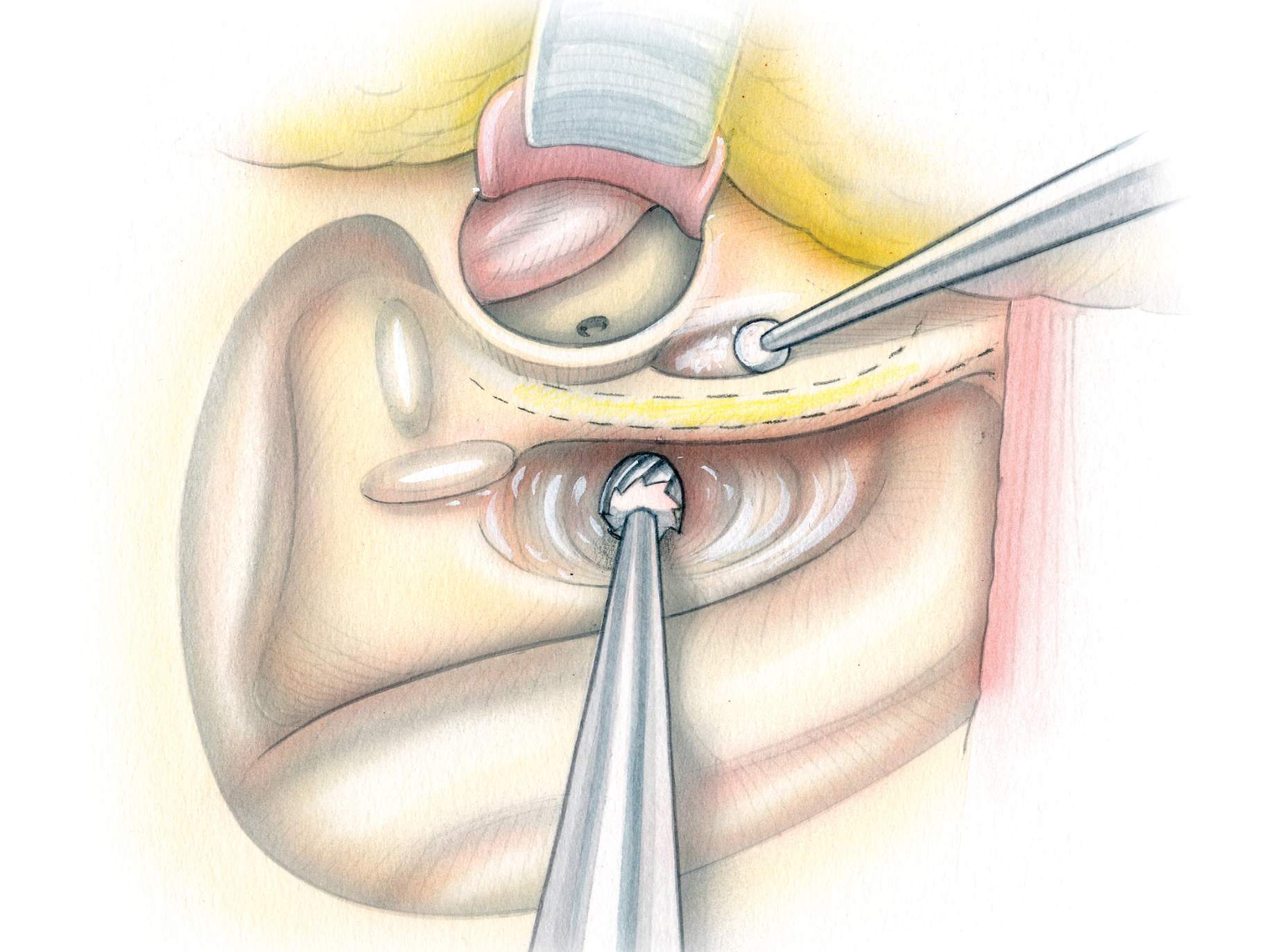 For additional illustrations of the translabyrinthine approach, please refer to the Jackler Atlas by clicking on the image below: 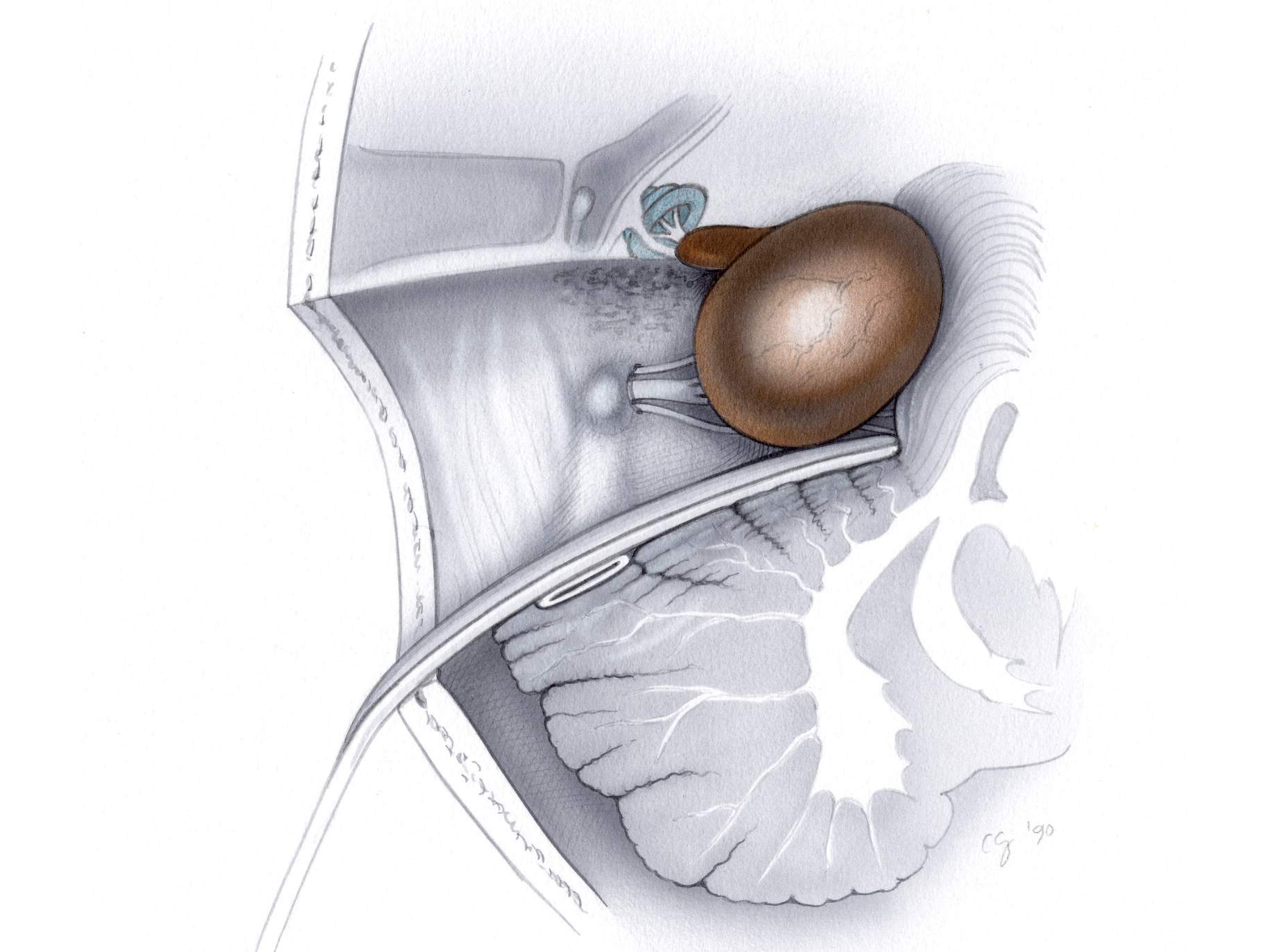