A significant transverse sinus injury occurred during the craniotomy for resection of a right occipital glioma. Details of hemostasis and reconstruction will be discussed in the following chapter.

Several neurosurgical approaches expose or manipulate the dural venous sinuses. The skilled surgeon should master the venous anatomy through a detailed study of the preoperative images, expect intraoperative difficulty and prepare appropriately. Compared to the cerebral arteries, the veins and dural sinuses do not get the attention they deserve.

Despite the use of meticulous microsurgical techniques, dural venous sinus injury and bleeding is encountered by virtually all neurosurgeons. Dural sinus injury and occlusion can lead to devastating venous infarction and irreversible neurologic deficits, if not handled judiciously. Therefore, it is imperative to anticipate, be prepared, remain calm, and be determined to manage dural sinus bleeding wisely.

Some measures are worth special emphasis. As a preventive measure, unnecessary exposure of the venous sinuses should be avoided and craniotomies should be no closer than 1.5 cm to midline. When the craniotomy is in close proximity to these sinuses, the wall of the sinus should be generously separated from the inner skull bone before the footplate of the drill is used. The difficulty of this dissection is anticipated in elderly patients, repeat operations, and patients with thick skull.

Aggressive retraction along the dura near the dural venous sinuses may lead to sinus occlusion and thrombosis. Venous sinus compromise can cause intraoperative brain swelling and spontaneous intracerebral hemorrhage. Therefore, if intraoperative cerebral tension is encountered, one should rule out inadvertent occlusion of the neighboring venous sinuses. Microdoppler ultrasonography can confirm the patency of and flow within of the sinuses during temporary retraction.

When bleeding from a nonvital venous sinus, such as the occipital sinus, is encountered, the sinus may be ligated using silk sutures or Weck clips. This can occur during Y-shape dural opening during posterior fossa operations. 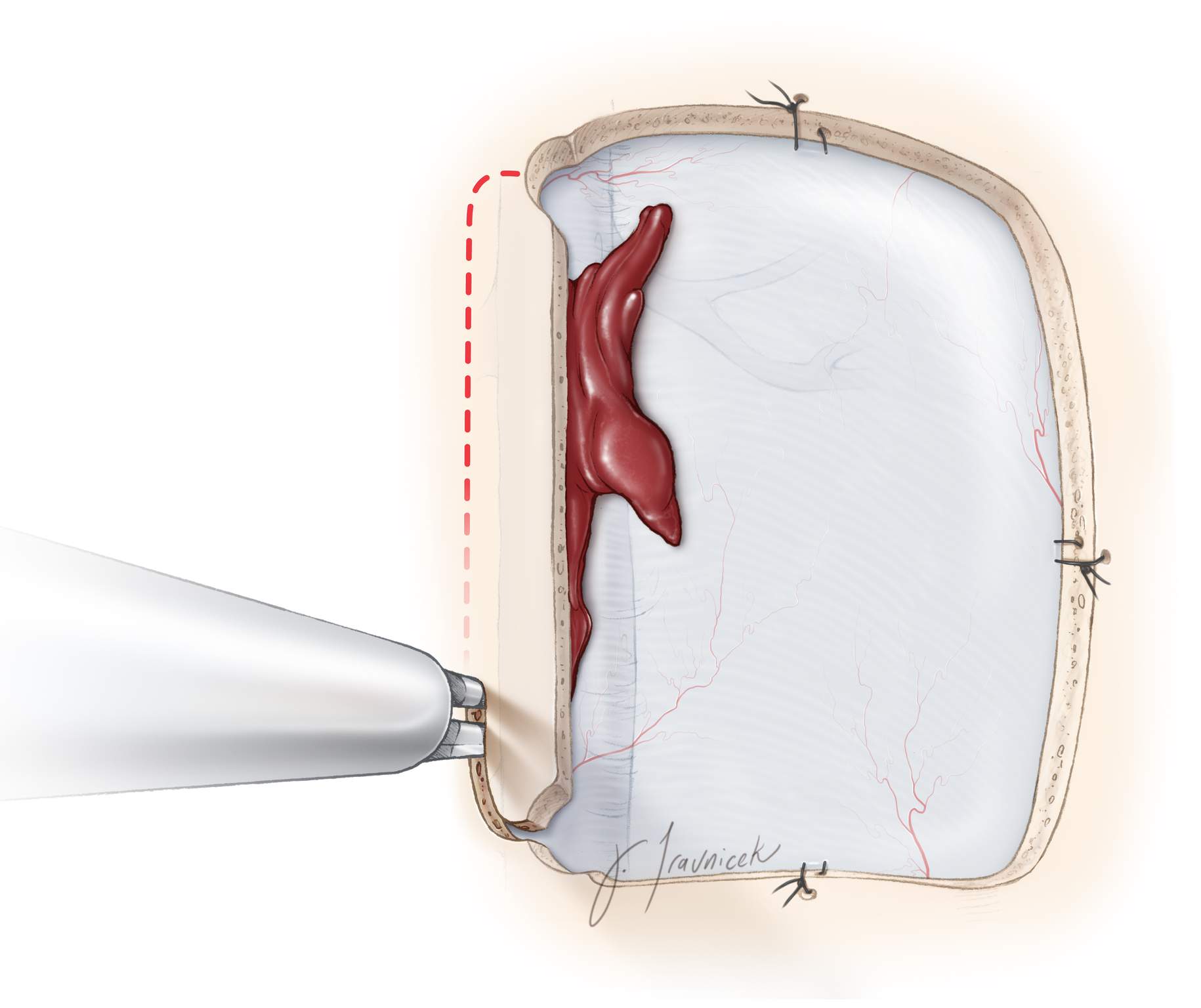 Figure 1: During the craniotomy, the last bony cut must be made near and over the sinus to ensure timely elevation of the bone flap to control bleeding in case an inadvertent injury to the sinus occurs. If the sinus wall is adherent to the inner skull, a B1 bit without a footplate may be used to perform the bony cut over the sinus: The outer cortical and cancellous bone is drilled to create a trough. The inner cortical bone layer is then gently fractured under direct vision to elevate the bone flap. If significant sinus bleeding is encountered, the sinus should be unroofed so that the site of bleeding can be adequately addressed, rather than by means of blind packing of the sinus lumen via hemostatic agents.

To protect the sinus during dural opening, I incise the dura based over the sinus. The extensions of the venous sinuses and venous lakes often reach beyond the margins of the sinuses; therefore, the dural opening must be conducted judiciously along the paramedian regions.

After exposing the area of the injury, the next step involves reaching hemostasis and/or clearing the operative field to select the maneuvers necessary to repair the sinus. The operator should remain composed in the face of torrential bleeding and warn the anesthesiologist about imminent massive blood loss and the need for immediate volume replacement.

Gentle tamponade using cotton patties readily controls the low-pressurized venous bleeding. The operator should not indiscriminately pack hemostatic agents (such as Gelfoam, or Surgicel) into the lumen of the sinus because this maneuver would lead to sinus occlusion and potentially cerebral swelling.

Assessment of collateral venous drainage is important before determining the appropriate reconstruction techniques. Proximal and distal vascular control over the sinus is preferred. Subject to the extent of the tear and ease of this maneuver, long aneurysm clips or vascular bulldogs may be used to temporarily halt bleeding. In the event of venous sinus transection, if the proximal and distal control is not feasible because the sinus is covered by bone along the craniotomy edges, cotton balls may be used to seal the sinus lumen temporarily.

Bipolar coagulation is contraindicated in partial sinus tears as this maneuver will enlarge the tear/opening by shrinking the dural edges and compounding the problem. Gentle elevation of the patient’s head (15 degrees) will reduce venous pressure within the sinus. However, this tactic dramatically increases the risk of air embolism and a high index of suspicion for air emboli must be pursued. The patient’s head may be elevated to reduce bleeding, but should not be raised to stop an anterograde venous hemorrhage because this leads to retrograde air siphoning. 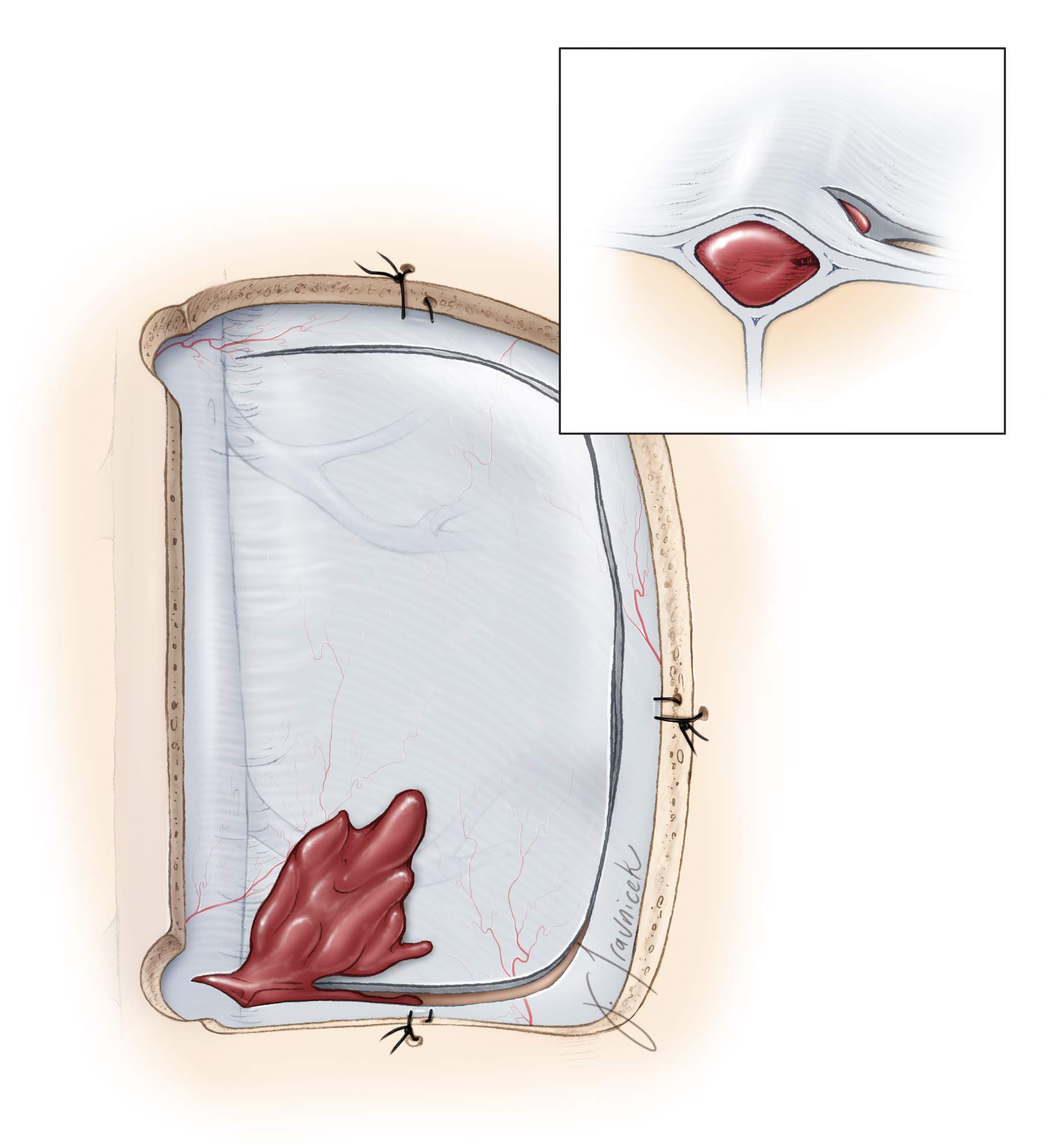 Figure 2: The most common form of injury to the sinus is a small tear along the lateral edge of the sinus during paramedian dural opening. The operator may misjudge the lateral extension of the variable venous sinus (venous lake) and as he or she attempts to complete the most medial dural incision to expose the interhemispheric space. 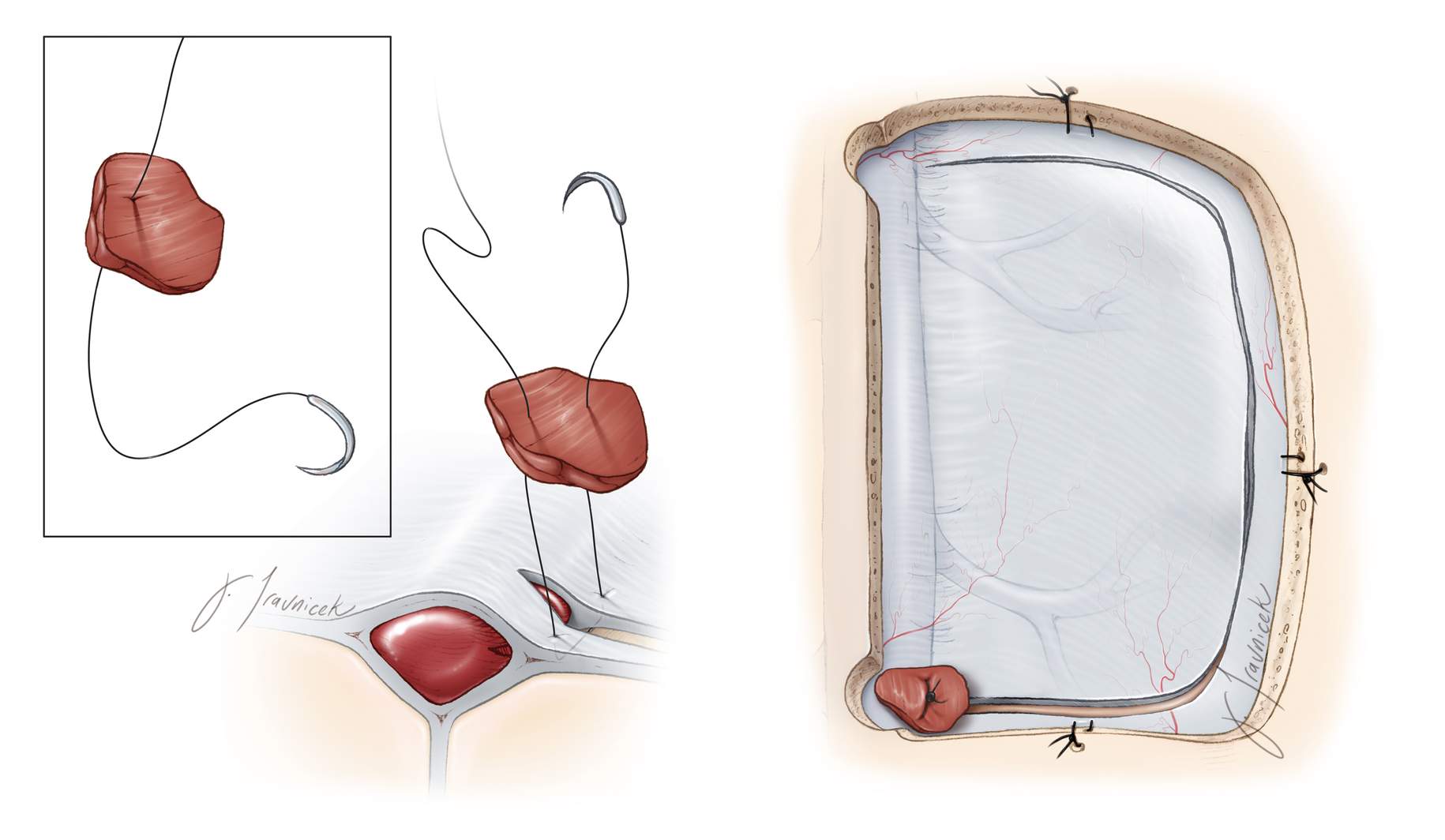 Figure 3: If the sinus edge or lake is torn, coagulation of the bleeding point leads to a larger tear. The small opening may be closed via primary closure using a single stitch. Alternatively, a piece of muscle can be used to plug the opening along with the suture as demonstrated in the above illustration. The rest of the dural opening may proceed as planned.

A variety of techniques may be employed to repair large lacerations within the dural sinuses. The fundamental principle is preservation of the sinus while controlling blood loss. To avoid hemodynamic instability, the operator may pause to obtain complete hemostasis and work intermittently in face of some bleeding from the lumen to make sure the anesthesiologist has a chance to replace the blood volume. 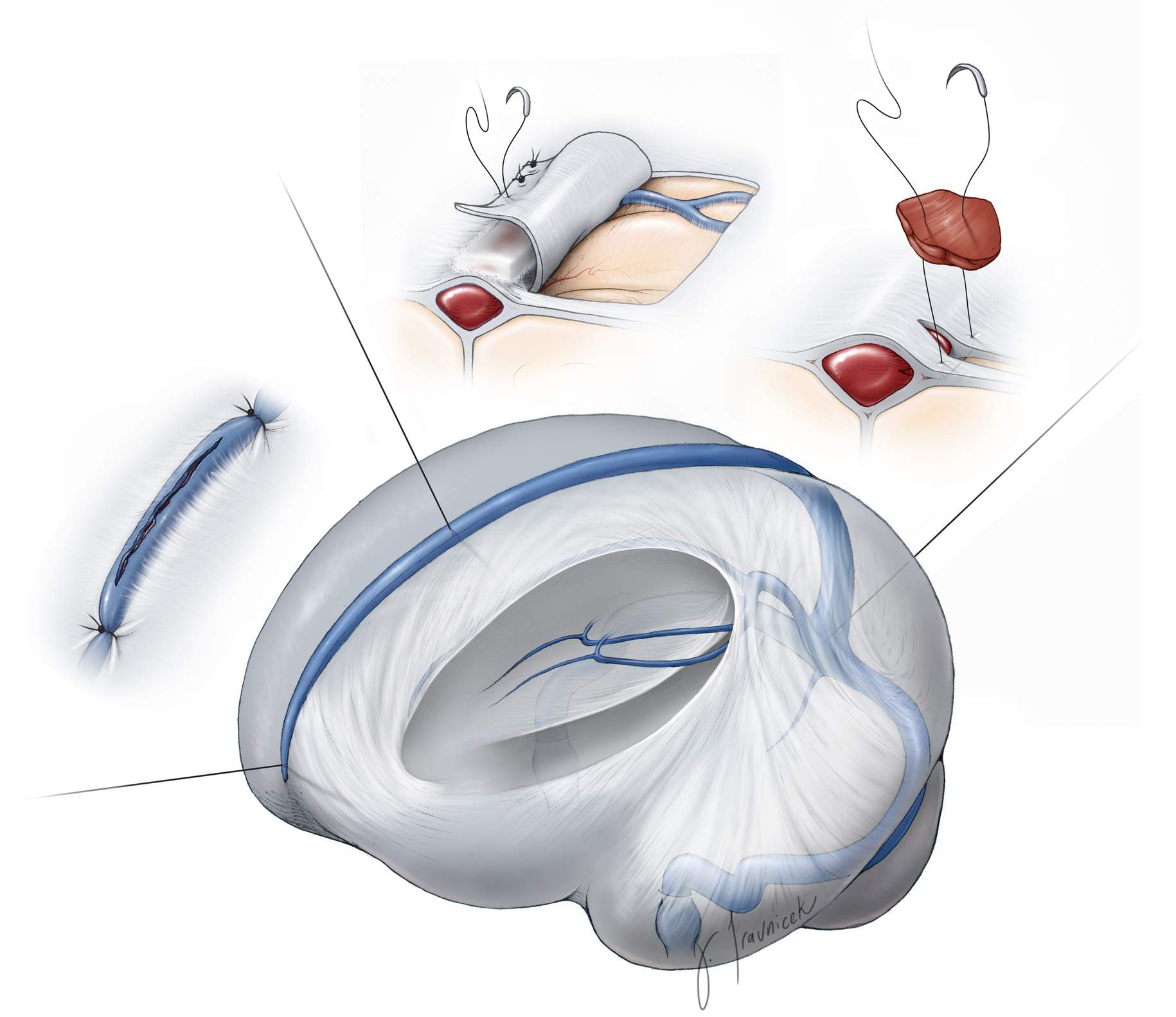 Figure 4: The recommended algorithm for repairing an injury to the superior sagittal sinus is determined based on the location of the injury along the length of the sinus, the degree of sinus disruption, and the mode of injury.

Injury to the Anterior One-Third of the Superior Sagittal Sinus

The anterior one-third segment of the superior sagittal sinus (anterior to the coronal suture) may be occluded with little or no risk to the patient as long as there is paucity of parasagittal veins around this segment. There are exceptions to this rule, and I have therefore attempted to save the venous sinus along its entire length when possible. 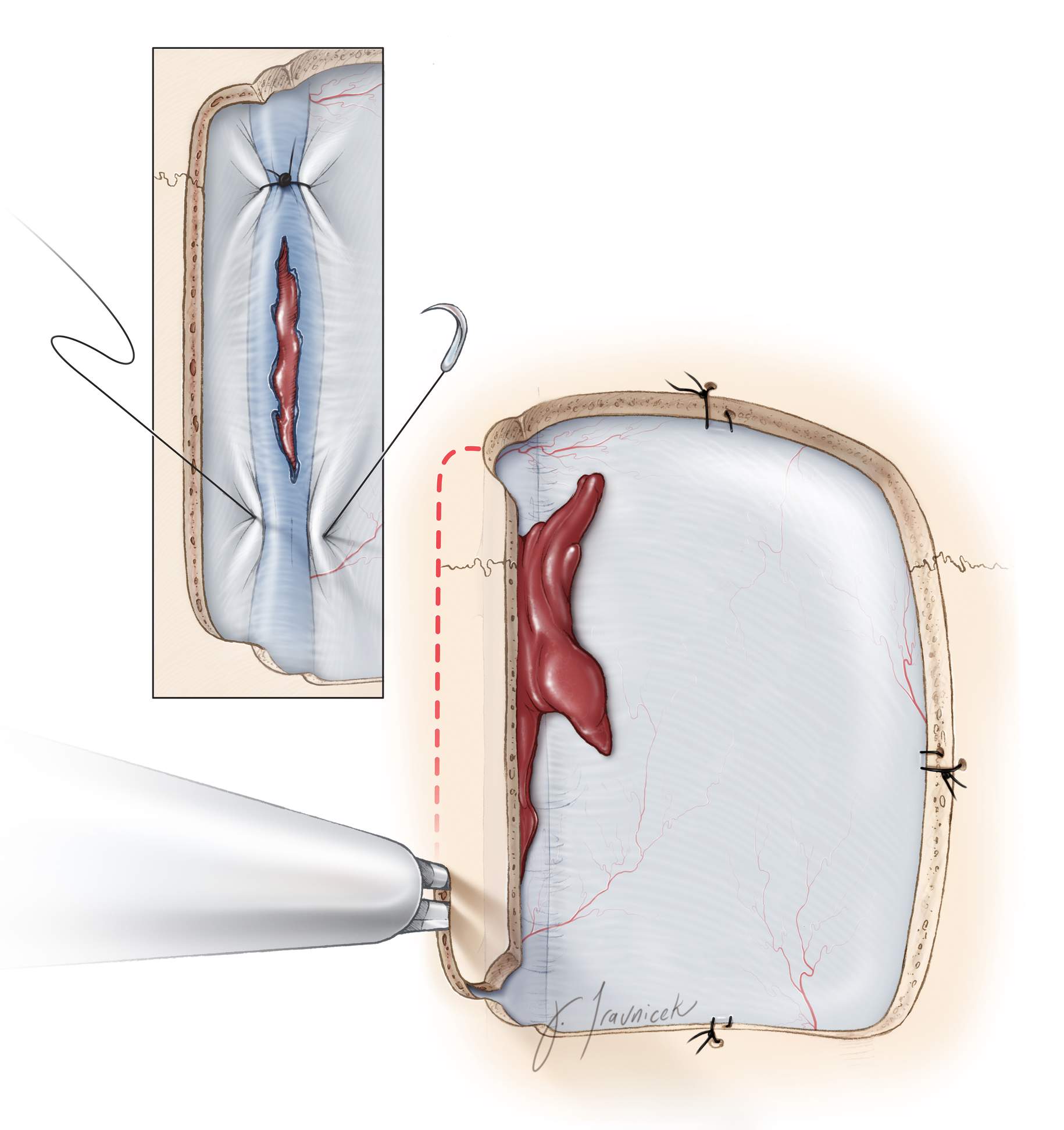 Figure 5: At the anterior segment of the sinus, the injured section of the sinus can be tied off using 2-0 silk sutures after the corresponding length of the sinus is exposed through removal of additional bone (right lower image).

Injury to the Posterior Two-Thirds of the Superior Sagittal Sinus

This segment of the sinus is vital for drainage of the hemispheres, and its patent lumen must be preserved to avoid devastating venous infarction. The mode of injury plays an important role regarding the recommended methods to repair the defects in the wall.

Figure 6: Traumatic depressed skull fractures or the footplate of the drill can cause inadvertent interruptions or sizable tears along the superior wall of the sinus that are not amenable to primary closure. In these situations, I remove additional bone over the sinus expeditiously and investigate the morphology and extent of the tear. A piece of Surgical fibrillar, a long cotton patty, or strip of cotton is placed over the tear and hemostasis is secured through gentle pressure. Again, it is important to avoid the temptation to stop the bleeding and occlude the defect in the sinus wall/lumen with packing hemostatic materials.

A piece of the parasagittal dura that is longer than the laceration is incised (“swing flap”) and reflected over to cover the defect in the wall of the sinus. Parasagittal bridging veins should be carefully protected during these dural incisions. 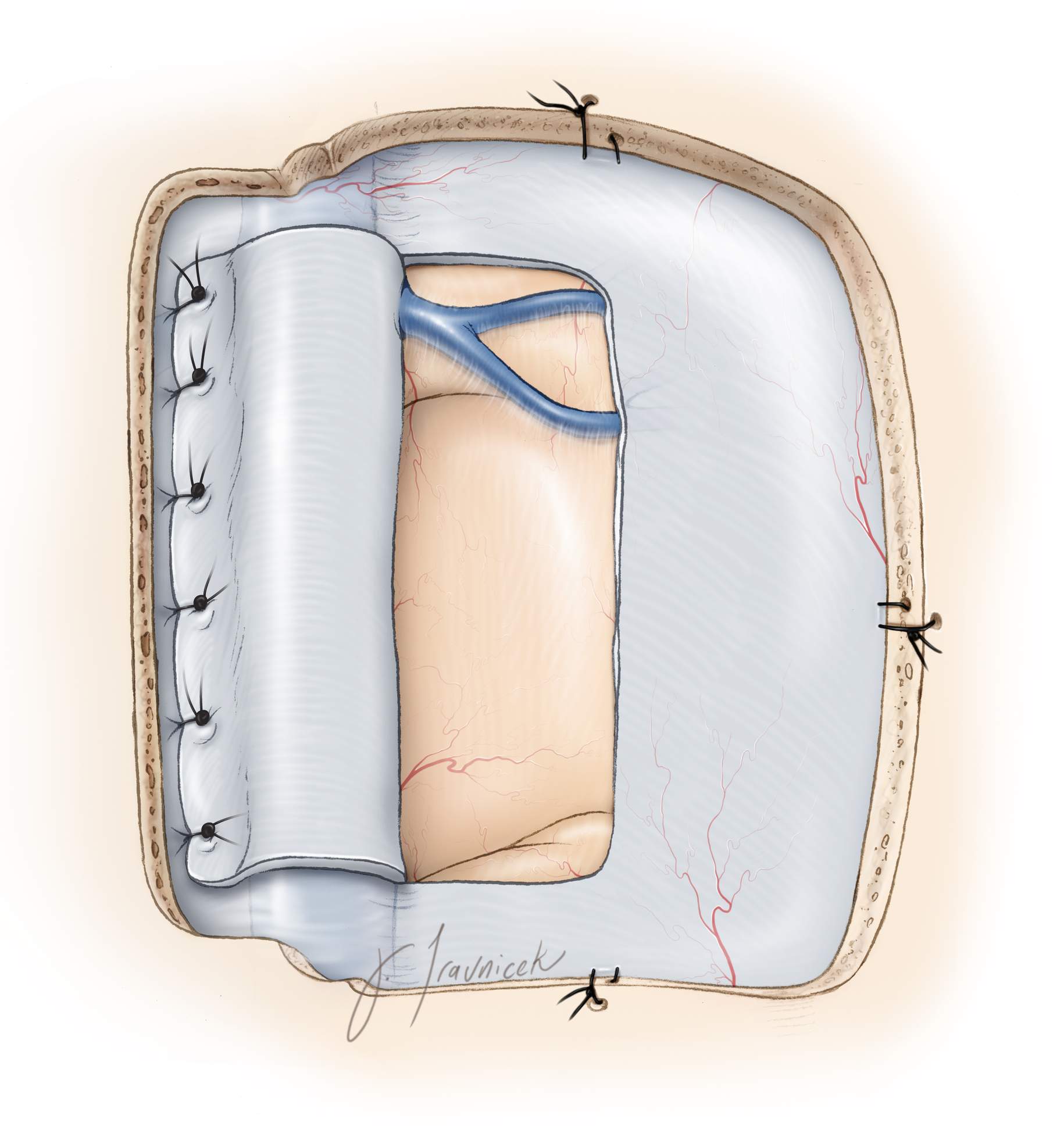 Figure 7: The swing dural flap is sutured to the contralateral paramedian dura. The final result allows reconstruction of the roof of the sinus. The sheet of cotton may be removed before the swing flap is completely sewn in. The swing flap may be sutured to the falx or tentorium if the laceration is more internal.

If cerebral swelling is encountered during this procedure, a vascular shunt tubing may be placed inside the sinus lumen to restore blood flow immediately. Intraoperative fluorescent angiography can confirm flow within the sinus after reconstruction is complete.

If the initial attempt to reconstruct the wall and restore flow is not successful, a thrombus within the lumen is expected. The suction tip is inserted underneath the swing dural flap and into the lumen to remove the clot and restore flow. The lumen is also irrigated with Heparin solution.

Injury to the Torcula 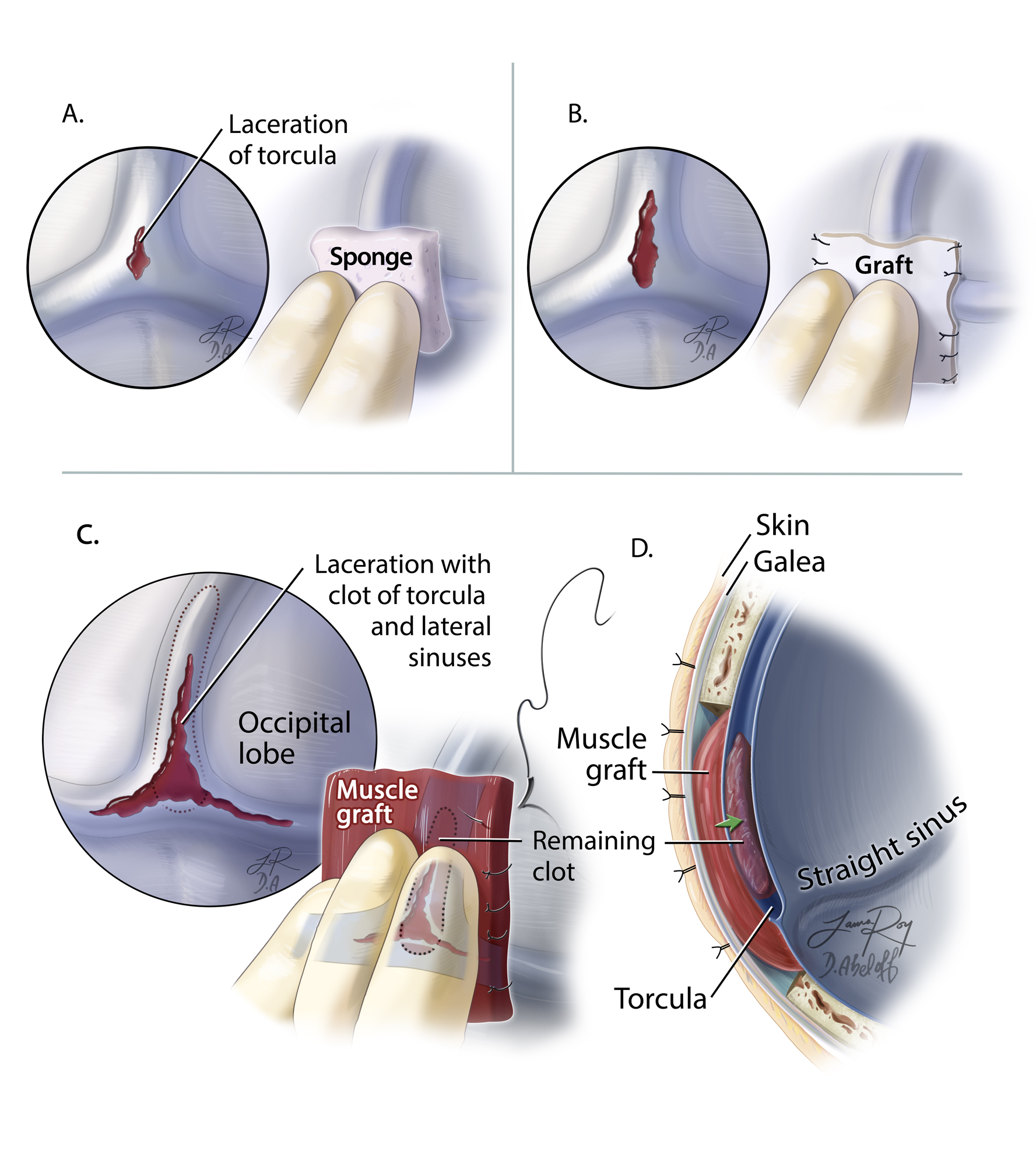 Figure 8: The steps involved in repair of a torcular tear are illustrated. For small lacerations, a piece of Gelfoam sponge is temporarily placed over the laceration covered with a cottonoid patty to control the bleeding (A, left upper). The tamponade should not occlude the dural sinuses and keep the flow in the torcula relatively preserved. A significant occlusion of the trocula can lead to sudden brain swelling, complicating any management scheme. For larger lacerations, a piece of fascia or allograft dura may be sutured in place (B, right upper corner). For extensive lacerations of the torcula, a large piece of muscle and its attached fascia are used to construct the roof of the sinus. Note that some of the clot within the sinsues should be removed before the last stitches are placed. Also, one of the more affected transverse sinuses may be unsalvageable and has to be sacrificed during the process of reconstruction (C and D, bottom panel). Aggressive removal of the intraluminal clot in a relatively relaxed brain is not advised due to the high risk of uncontrollable bleeding.

Repair of the Transverse Sinus Injury 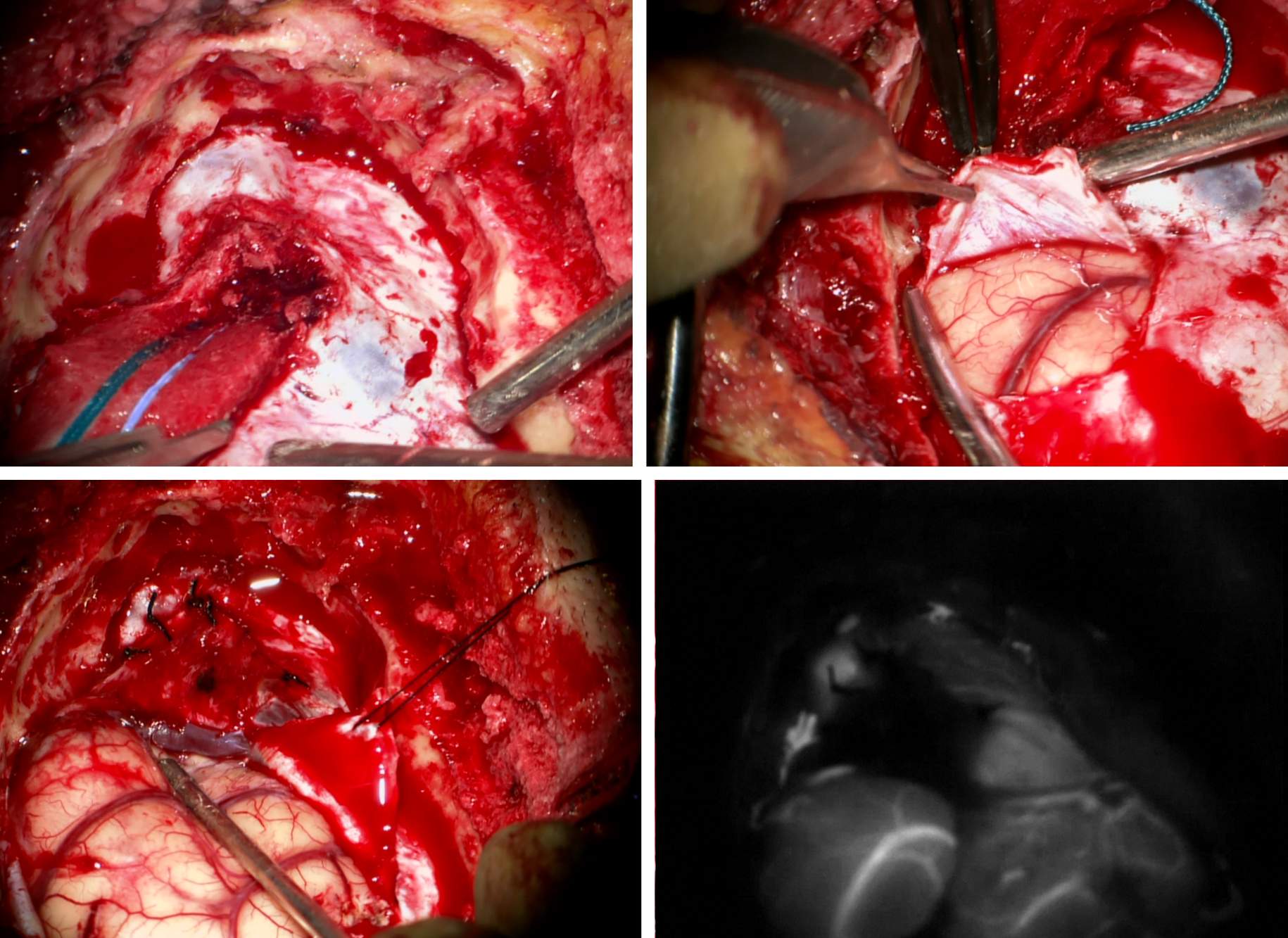 Figure 9: Significant injury to the roof of the right transverse sinus occurred during craniotomy for resection of a right occipital glioma. This injury was not amenable to primary repair. First, additional bone over the transverse and sigmoid sinuses was removed to obtain vascular control. Next, a cotton patty was used to cover the wall defect (left upper image) while the sinus reconstruction is performed. A swing dural flap from the occipital dura is prepared (right upper image) while the vein of Labbe (at the tip of the suction) is protected. This dural flap is reflected and used to reconstruct the roof (right lower image). Intraoperative indocyannine green angiography reveals the patency of the sinus lumen.