The process of wound healing can be divided into inflammatory, proliferative, and maturation phases. Polymorphonuclear leukocytes migrate first, followed by macrophages and mononuclear leukocytes. The protective epidermal layer is replenished within 48 hours of wound closure as the marginal basal cells migrate to cover the defect within the incision line.

Fibroblasts migrate for about 4 to 5 days and deposit disorganized collagen. The closed wound regains about 20% of its original tensile strength after 3 weeks, and about 60-70% by 6 weeks, and 80% by one year. Radiation inhibits the ability of fibroblasts to migrate and deposit collagen.

Based on the above mechanisms, it is therefore important to cut the skin perpendicular to its surface and avoid oblique incisions or scything of the adjacent dermis. During closure, the suture needle should enter perpendicular to the surface of the skin with the sutures placed at an equal distance and depth from the edges of the incision. These maneuvers prevent inversion of the skin edges and an unequal surface, which would inhibit efficient and effective epithelialization. “Unequal bites” lead to poor healing and cosmetically undesirable scars. 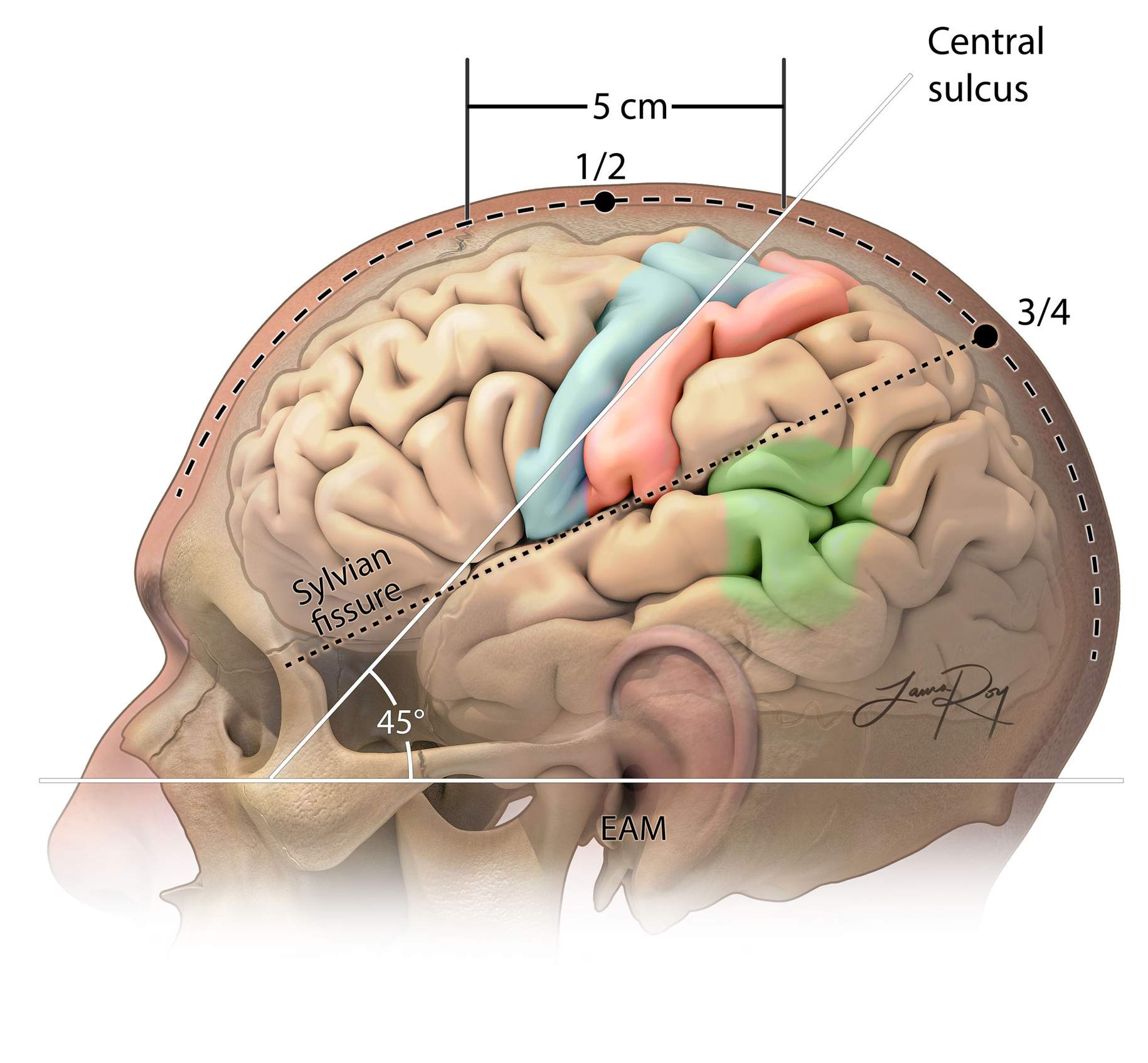 Figure 2: Before I discuss the nuances of planning for the incision, I like to review some of the relationships among the surface landmarks and underlying cerebral anatomy. The above illustration summarizes some of the most relevant landmarks. A line from the lateral canthus connecting to the point 3/4 of the way posterior and along the arc traveling over the midline from nasion to inion approximates the location of the Sylvian fissure (hashed line). The horizontal line through the external auditory meatus (EAM) is shown. A line at a 45 degree angle from the EAM marks the location of the central sulcus. The motor cortex is about 4-5.5 cm behind the coronal suture. The superior aspect of the motor cortex is almost straight superior to the EAM near the midline. The central sulcus is also 2-3 cm posterior to the midposition of the arc extending from nasion to inion. Although significant variability exists, the angular gyrus is just above the pinna.

The most important factor in minimizing wound healing complications and breakdown is thoughtful planning of the first incision. Malignant tumors often undergo radiation and chemotherapy, and this places the wound at risk of dehiscence and subsequent infection. 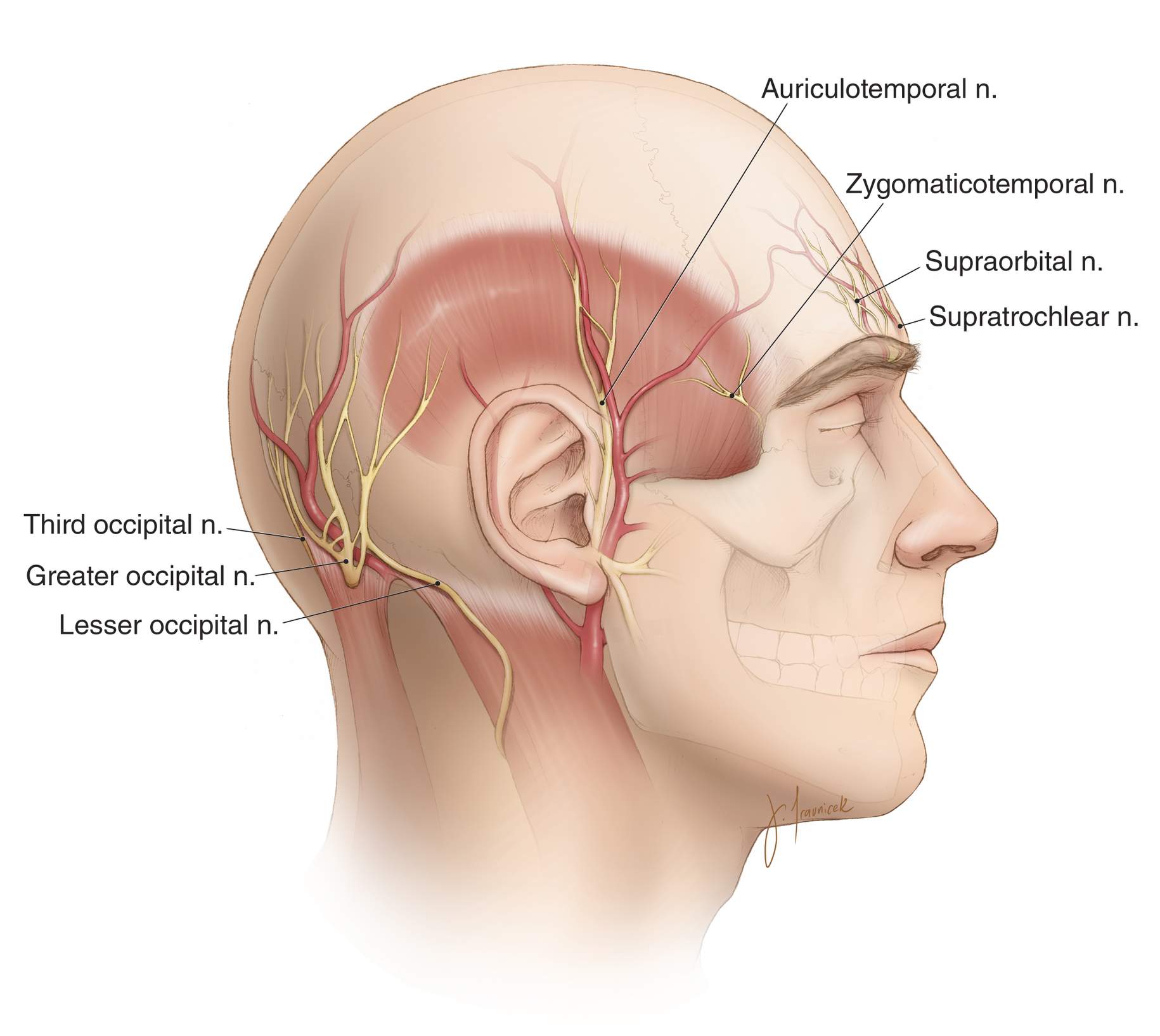 Figure 3: The relevant neurovascular anatomy of the scalp for planning incisions is shown. The vasculature of the scalp is derived from the internal and external carotid arteries. These arteries include the supraorbital, supratrochlear, superficial temporal, posterior auricular, and occipital arteries. The incision should preserve these vessels as much as possible and avoid transecting most of their branches; this measure will promote vascularized scalp flaps.

The vasculature of the scalp becomes more tenuous toward the midline. Therefore, the base of the incision should be close to the periphery of the scalp. Fortunately, the scalp’s vascular network is robust, and this leads to a low risk of flap necrosis during cranial surgery despite narrow flap pedicles.

Figure 4: Pterional (left image) and posterior fossa (right image) incisions: The main trunk of the superficial temporal artery and its frontal branch are usually protected if the incision begins about 1 cm anterior to the tragus. Unlike its linear counterpart, the retromastoid curvilinear incision can potentially protect the occipital artery.

Several principles are crucial in planning scalp incisions and promoting timely wound healing. The most appropriate incision outline should:

In general, linear incisions parallel to the routes of major feeding arteries (i.e. superficial temporal and occipital arteries) are well-vascularized (transect least number of branching arteries) and offer numerous options for salvage maneuvers to promote wound healing in the event of wound breakdown. U-incisions are less likely to offer these advantages and are more time consuming to open and close.

Scalp incisions can play an important role in reaching the desirable operative trajectory. For example, a poorly planned incision can mobilize a thick suboccipital muscle in the wrong direction to dramatically increase the working distance of the surgeon through the retromastoid corridor.

The need to remove the patient’s hair to decrease the risk of postoperative infection is controversial, and there is no Class I evidence that supports the need to shave the patient’s entire head before surgery. I advocate clipping the hair instead of shaving, and I clip a strip of hair around the incision.

The following images demonstrate the patterns of scalp incisions for first time or repeat operations. 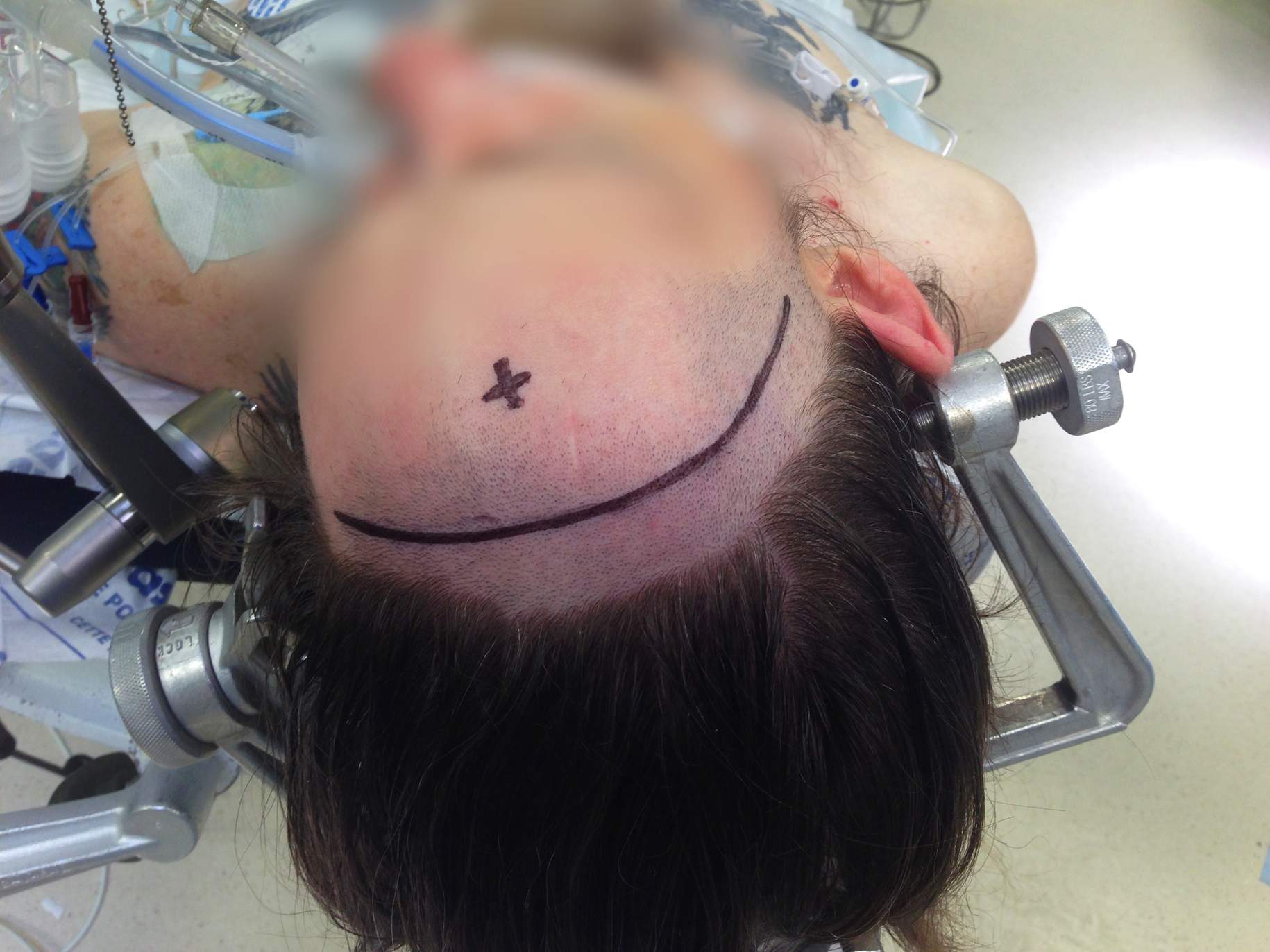 Figure 5: The scalp incision for exposure of a frontal metastasis (marked as +) is shown. The basic principles for planning the scalp incision are satisfied: the incision is behind the hairline and curvilinear rather than U-shaped to increase vascular support to the edges of the wound. 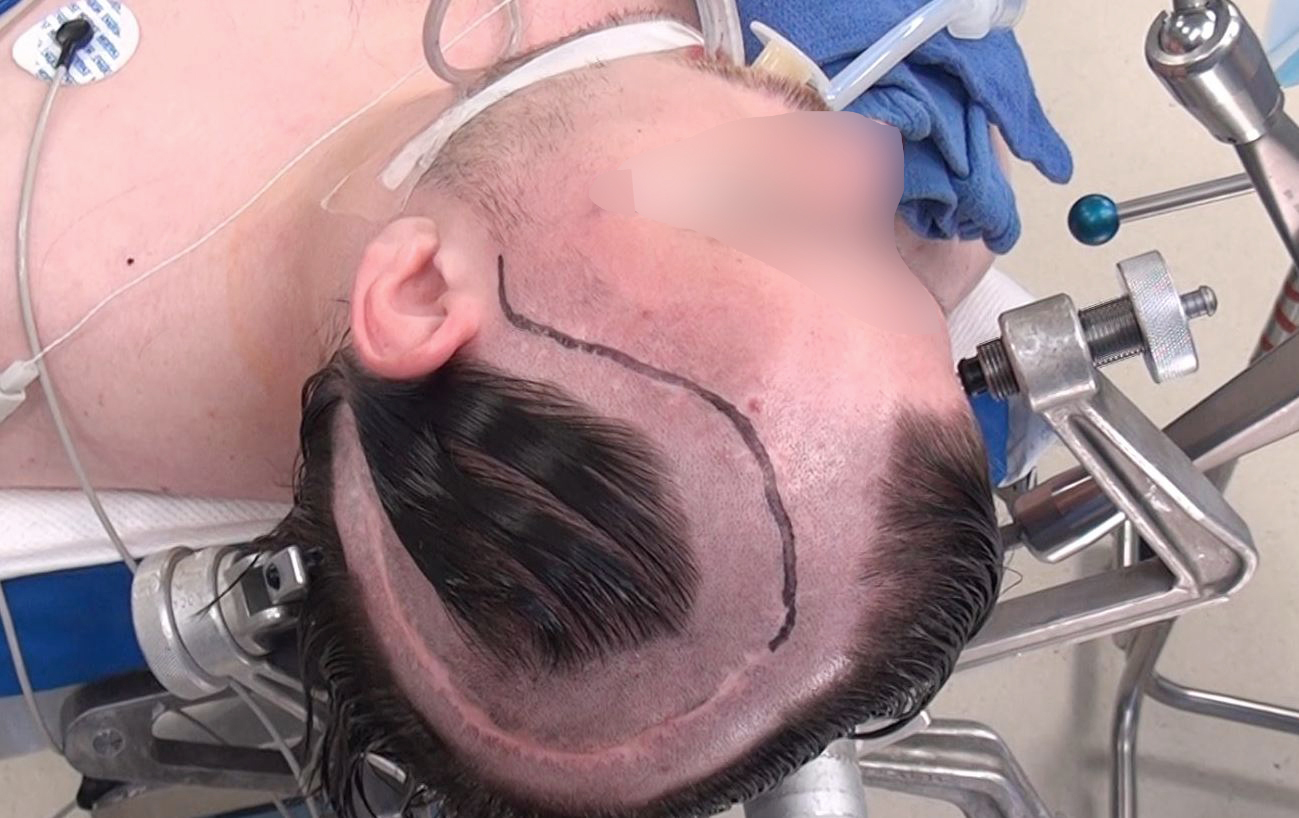 Figure 6: With this patient, the basic principles of scalp flaps were not addressed during the first surgery. The height of the flap is substantially longer than its base. During the second surgery, only the anterior limb of the incision was used (marked in black) to avoid wound complications. 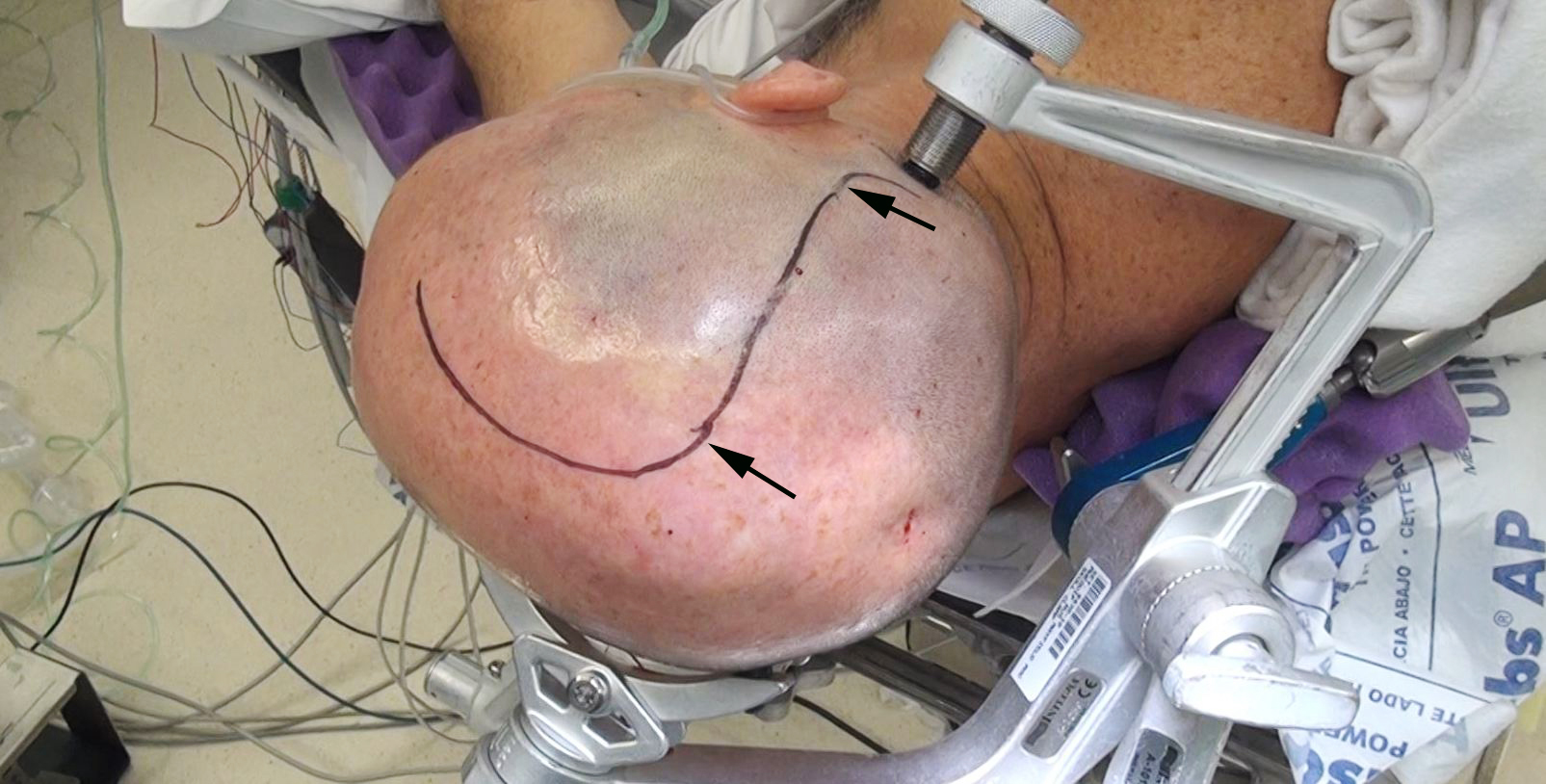 Figure 7: Repeat operations after radiation treatment are especially taxing on the healing process. In this case, the patient underwent his first surgery using a linear incision (marked with arrows). Following radiotherapy, the tumor later recurred anterior to the initial resection cavity. The linear incision allowed more flexibility for planning the incision to expose the region anterior to the resection cavity during the second operation.

Figure 8: In this patient, the tumor recurred along the posterior aspect of the initial resection cavity. The limits of the incision for the first operation are marked with arrows. For the second operation, the linear incision was extended posteriorly using a U-shaped flap with a broad base. 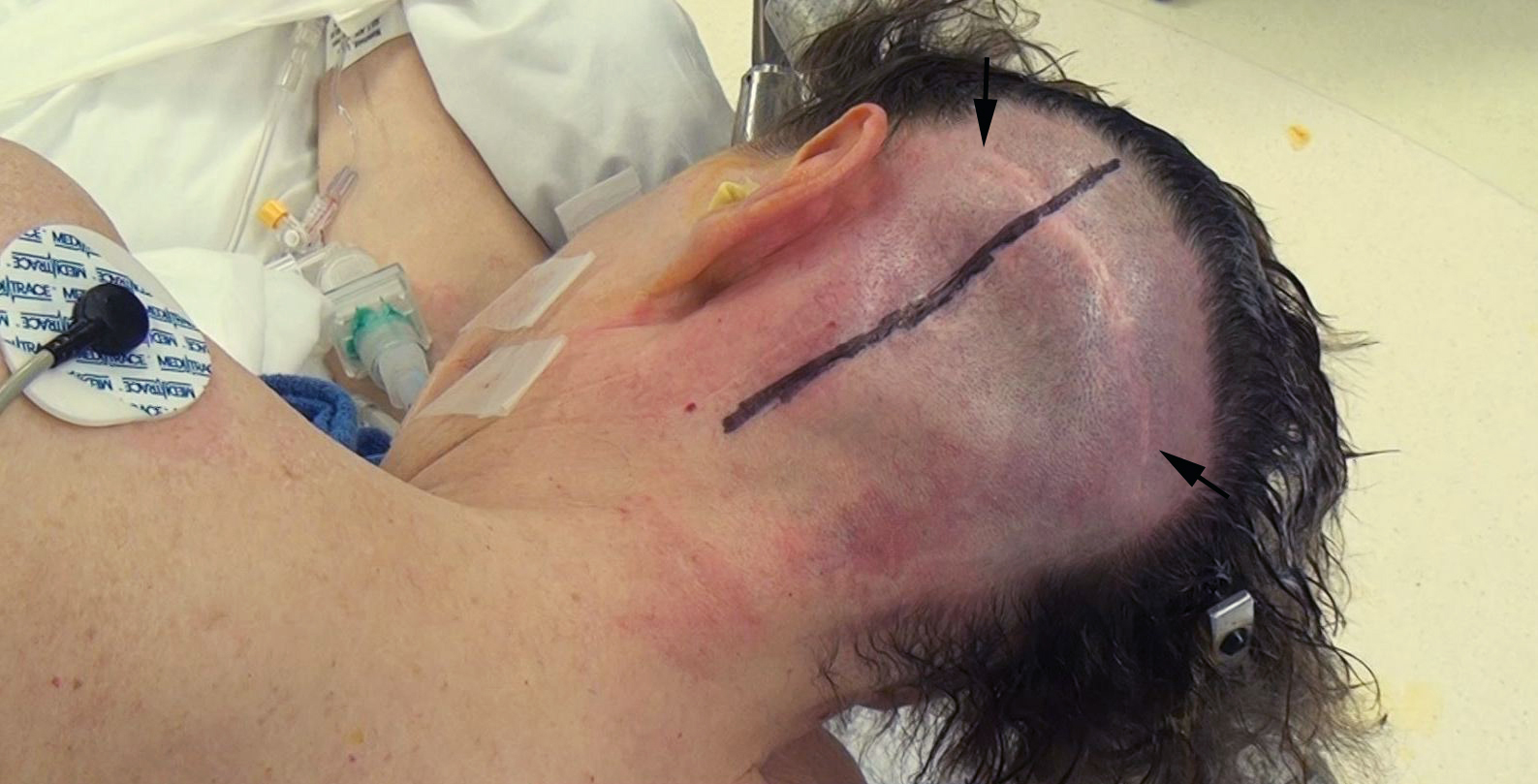 Figure 9: This patient underwent a third operation for a recurrent giant cerebellopontine angle hemangioblastoma. Previous surgeons had used perpendicular incisions (note the horizontal incision that is marked with arrows). For the third surgery, only the horizontal limb was used to maximize vascular support for wound healing. 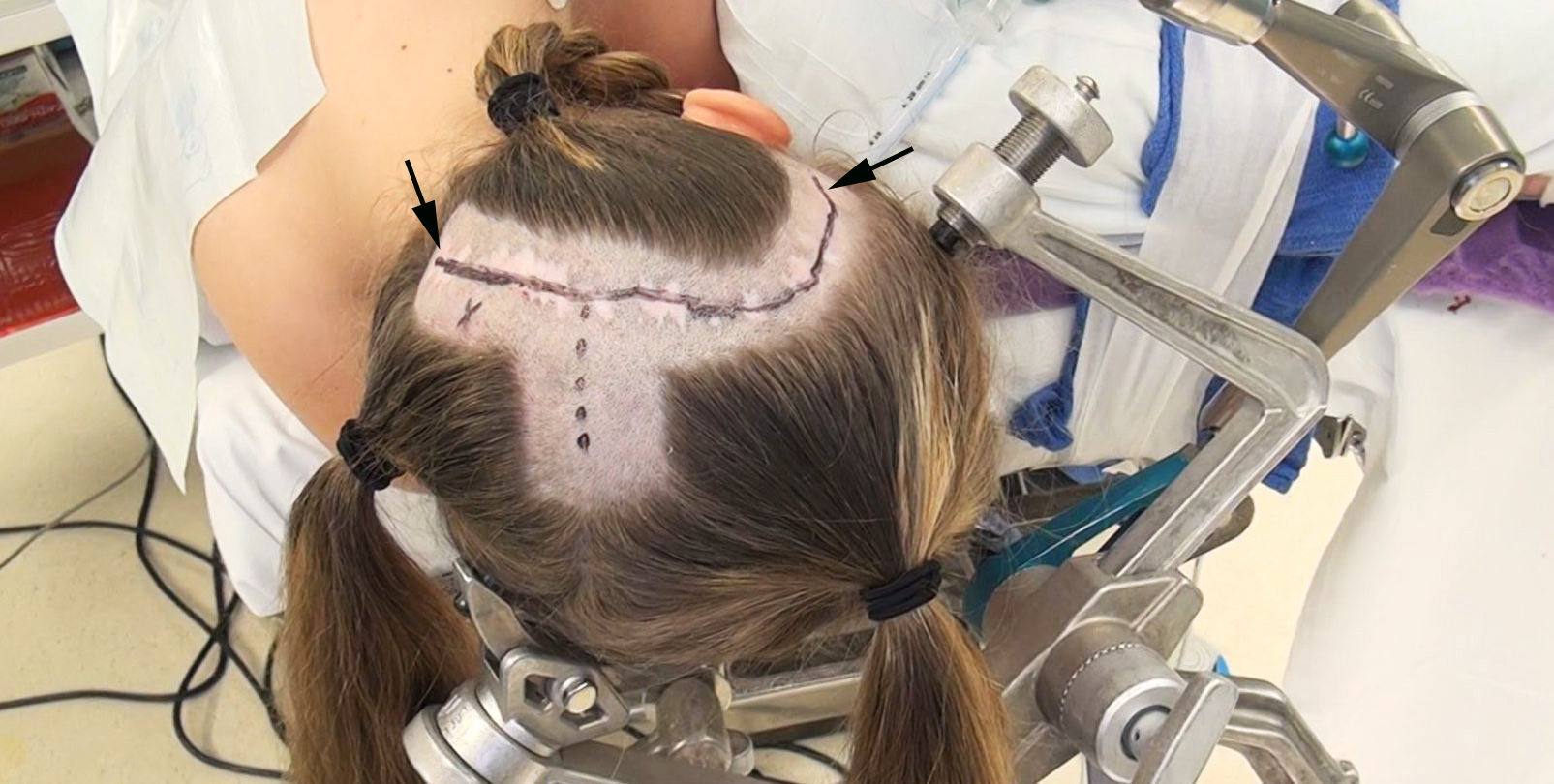 Figure 10: This young patient underwent evacuation of an AVM-related temporoparietal intracerebral hemorrhage during her first surgery using the incision marked with arrows. She subsequently underwent a second surgery for resection of her arteriovenous malformation, which was located in the posterior-superior aspect of her hematoma cavity (marked with X). Note the addition of a short T-shaped incision (marked as a dotted line) to expose the desired area.

The following photographs demonstrate other variations of supratentorial cranial incisions and their associated patient positions. 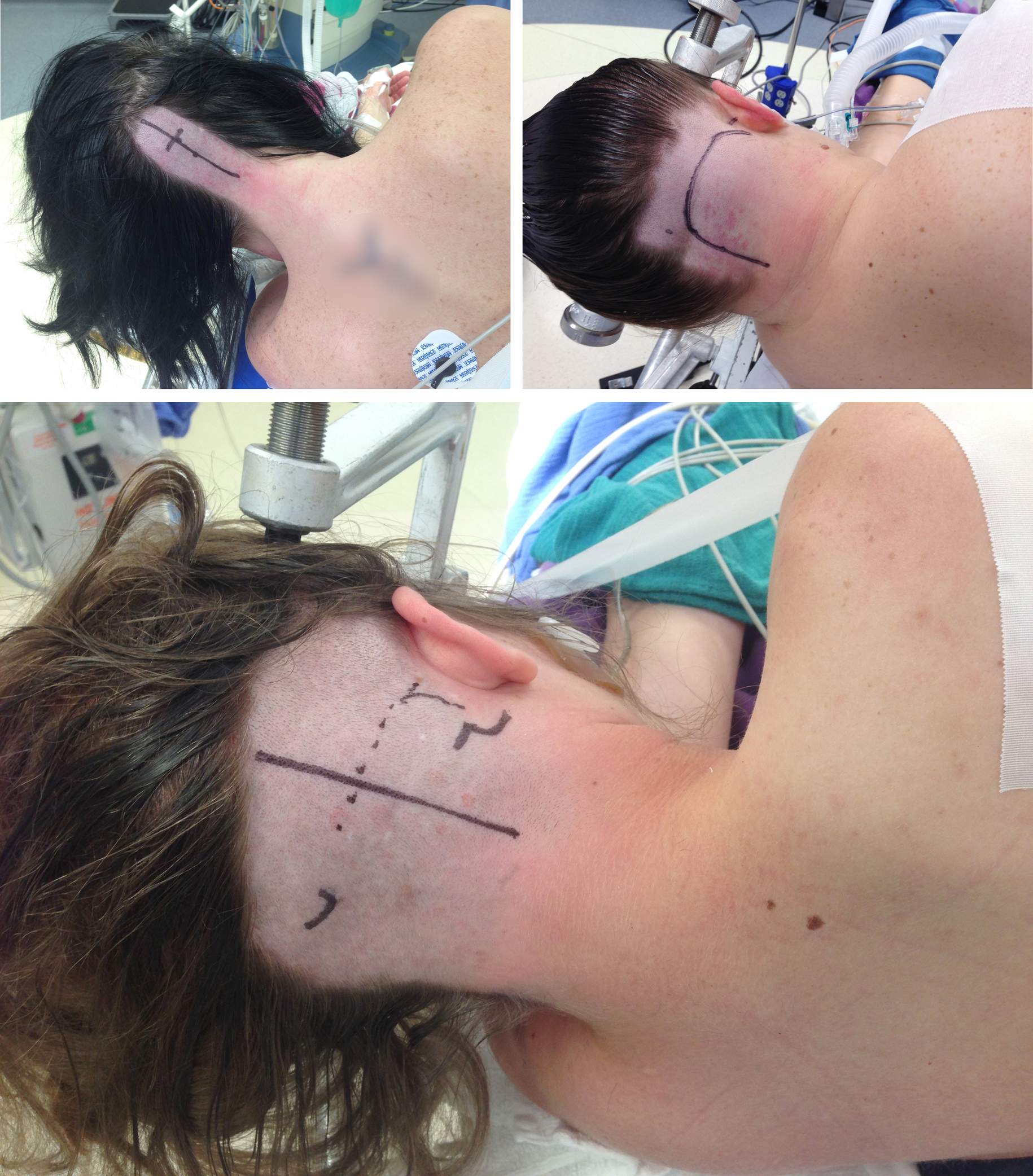 Figure 12: The midline incision (left upper image) is designed for midline suboccipital craniotomies; the hockeystick incision (right upper image) is for paramedian and jugular foramen lesions as well as for transcondylar approaches. The linear paramedian approach can function as the hockeystick incision in a number of situations, including for supracerebellar corridors. The locations of the inion and mastoid tip are marked (lower image). 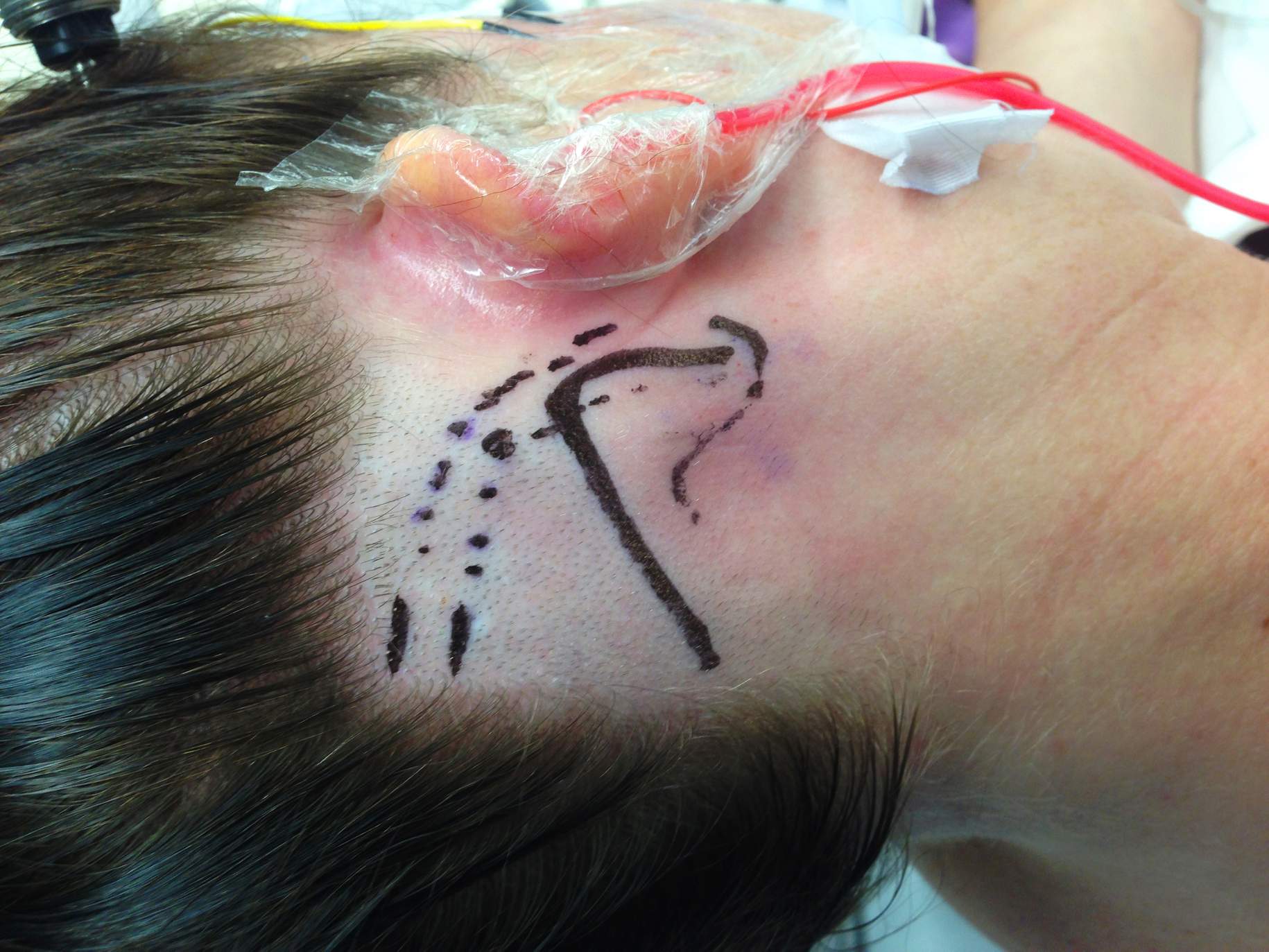 Figure 13: I prefer a curvilinear incision for retromastoid craniotomies. The location of the incision with respect to the transverse and sigmoid sinuses (dotted lines) and the mastoid tip/groove is demonstrated. Wider-based or taller incisions are used for large cerebellopontine angle tumors including acoustic neuromas. For further discussion regarding the advantages of this incision over linear incision, please refer to the chapter on Retromastoid Craniotomy.

Figure 14: This photograph shows my choice of incision for combined subtemporal and retromastoid approaches, as well as for posterior petrosal osteotomies.

Figure 15: For combined approaches involving a pterional craniotomy, the incision shown in the photograph above can be used. The junction of the incisions is at risk because of a poor vascular pedicle.

I use multifilament braided sutures (Vicryl 3-0, Ethicon, Cincinnati, OH) to approximate the galea. This suture is absorbed by hydrolysis in 50-70 days. I use clear Monocryl 3-0 sutures (a synthetic absorbable suture by Ethicon) with a simple continuous (running) technique to close the skin layer. The half-life of this suture is 7-14 days. This suture avoids the need for staple removal and is also ideal for pediatric cases. For patients with infected wounds and traumatic cases with open lacerations, I avoid multifilament sutures and use monofilament sutures to approximate the galea and skin.

Embolization of scalp vessels during treatment of meningiomas or superficial arteriovenous fistulas can compromise vascular support to the scalp. Moreover, prior radiation treatments can lead to serious complications during wound healing. Such circumstances require the involvement of our plastic surgery colleagues and alternative incisions and reconstruction techniques to ensure vascularized pedicles for scalp flaps. For example, if the superficial temporal artery is absent, a reverse U-shaped incision should be avoided when completing a subtemporal craniotomy; linear alternatives would allow preservation of supplementary feeding vessels from the supraorbital/supratrochlear and posterior auricular/occipital arteries.