Resection of an Intraorbital Tumor through the Modified Orbitozygomatic Craniotomy

The orbit can be affected by a wide variety of lesions. Thyroid-associated orbitopathy, inflammatory lesions, vascular disorders, and orbital neoplasia are included in the differential diagnosis of masses within the orbit. Dysthyroid orbitopathy is an inflammatory condition of the orbit that is associated with enlargement of the extraocular muscles.

Orbital tumors can be classified into categories based on their etiology as lymphoproliferative lesions (non-Hodgkin's lymphoma is the most common malignant adult orbital tumor), optic nerve and meningeal lesions, lacrimal gland tumors, and secondary orbital tumors that extend into the orbit from nearby structures and metastases. For neurosurgeons, spheno-orbital meningiomas and metastases are among the most common tumors affecting the orbit. Other lesions include optic nerve meningiomas and gliomas, cavernous hemangiomas, schwannomas/neurofibromas, and adenoid cystic carcinomas.

Proptosis and double vision are the most common presenting symptoms in patients with orbital lesions. Painful proptosis suggests an underlying inflammatory process. A decrease in visual acuity indicates lesions affecting the orbital apex and the optic nerves.

A full history and complete physical exam should be obtained. The examination should include assessment of extraocular muscle movements, pupillary size and reaction to light, visual acuity, visual field, eye position, and the fundus. Our oculoplastic colleagues are instrumental in the multidisciplinary care of these patients.

Magnetic resonance (MR) imaging of the orbit with and without gadolinium contrast with fat suppression sequences is helpful for clear delineation of the extent of the tumor and its relation to the optic nerve. Optic nerve meningiomas and gliomas lead to circumferential enlargement of the nerve.

Computed tomography (CT) of the orbit and paranasal sinuses evaluates the relation of the tumor to the surrounding bony anatomy.

Orbital tumors may be divided into extraconal, intraconal, and intracanalicular tumors based on their location relative to the muscle cone. The muscle cone is defined by the extraocular rectus muscles and their intermuscular septae, which separate the intraconal from the extraconal space. The globe serves as the base and the optic canal as the apex of the muscle cone. The location of the tumor within the intraorbital compartments determines the operative approach. 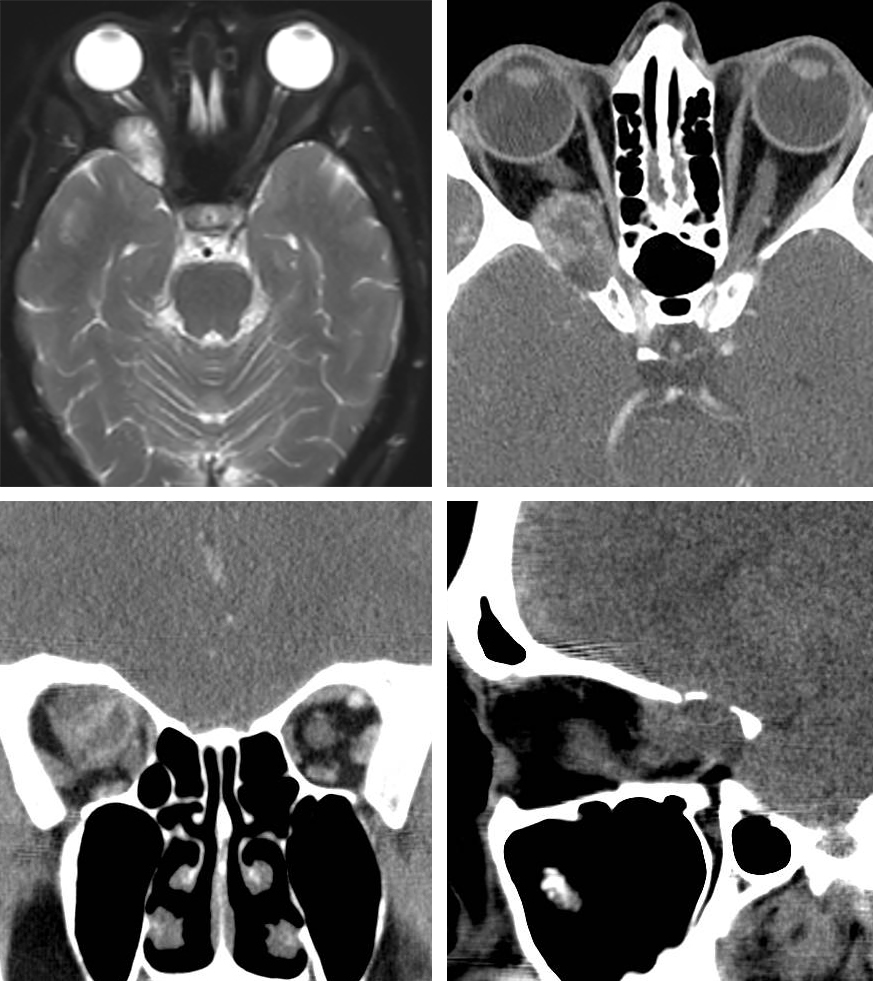 Figure 1: This intraorbital schwannoma was extraconal and occupied the posterior and superior aspects of the orbit. Note the medial location of the optic nerve and bone erosion of the orbital roof. 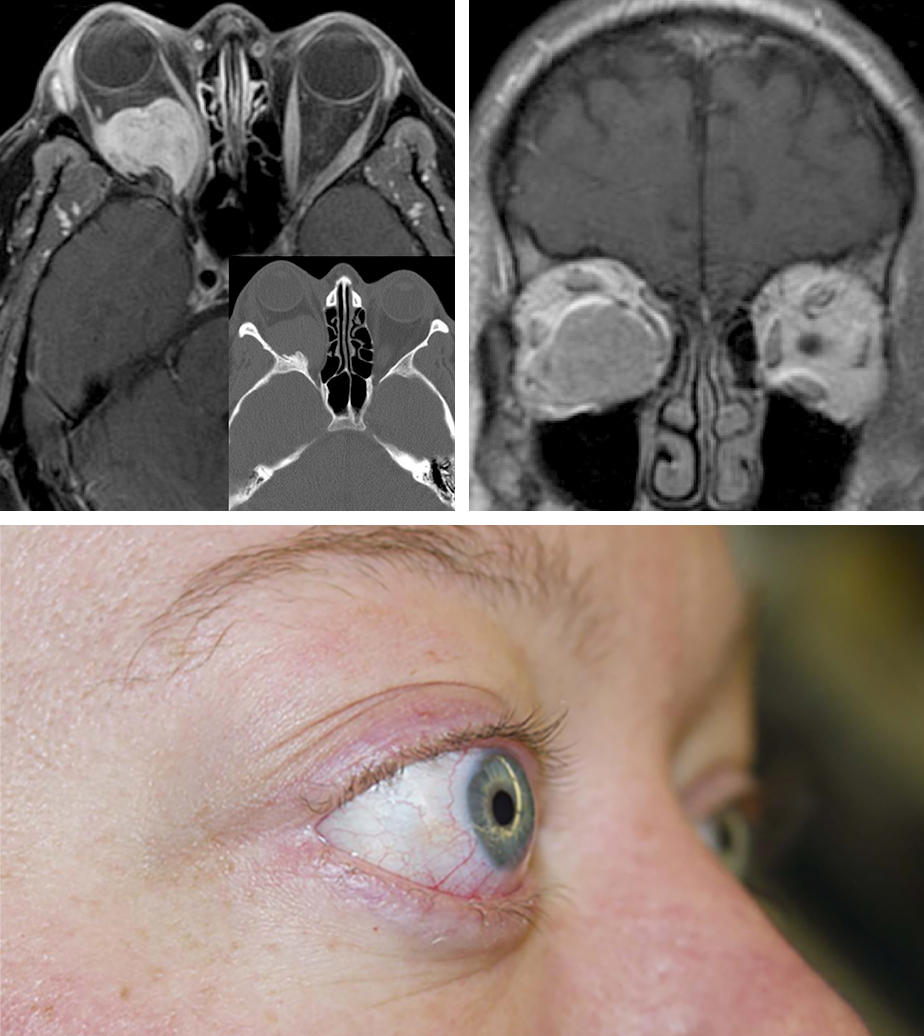 Figure 2: A right orbital meningioma with resultant proptosis is shown. The location and fibrous texture of this tumor required an orbitozygomatic craniotomy for its excision. Proptosis is one of the most common presenting symptoms of patients with orbital tumors.

For more details about the diagnosis and evaluation of orbital tumors, please refer to this article.

If extradural dissection is necessary, I prefer to use a lumbar drain to decompress the dura and facilitate its mobilization.

I do not favor the use of neurophysiologic monitoring for cranial nerves III, IV, and VI for lesions that invade the cavernous sinus. The resultant potentials do not add any significant value and the monitoring results are unreliable.

If I expect to resect more than 75% of the superior or lateral orbital walls, I prepare a custom implant prosthesis preoperatively. This implant is used to reconstruct the orbital walls at the end of surgery.

The orbit is a quadrangular space that communicates posteriorly with the anterior and middle cranial fossae via the optic canal and superior orbital fissure and inferiorly with the infratemporal and pterygopalatine fossae.

The medial wall is also formed by the maxillary, lacrimal, ethmoid, and lesser wing of sphenoid, which separates the orbital contents from the ethmoid and sphenoid sinuses. The medial wall contains the foramina for the anterior and posterior ethmoidal arteries.

The lateral wall of the orbit is also formed by the frontal process of the zygomatic bone and the greater wing of the sphenoid. The orbital apex is directed medially and contains the optic canal, as well as the superior and inferior orbital fissures.

The optic canal is 5 to 20 mm long, 4.5 mm wide, and 5 mm in average height. The optic strut is a bony ridge that connects the anterior clinoid process and the body of the sphenoid bone. The falciform ligament is a thick fold of dura that covers the optic nerve at its entry point into its foramen and the orbit.

The optic nerve is divided into four segments: intraocular, intraorbital, intracanalicular, and intracranial segments. The optic nerve travels an average of 15 mm intradurally and within the subarachnoid space medial to the internal carotid arteries before reaching the chiasm.

The central retinal artery arises from the ophthalmic artery 8 to 15 mm behind the globe and provides the main blood supply to the retina. The ophthalmic artery continues between the superior oblique and the medial rectus muscles, where it gives rise to the anterior and posterior ethmoidal arteries. Knowledge of these anatomic relationships of the ophthalmic artery to the optic nerve is important to avoid injury to both structures.

The frontal nerve travels over the levator and superior rectus muscles. It may be visualized through the periorbita. The trochlear nerve runs in the same plane and crosses the optic nerve from the lateral-to-medial direction to innervate the superior oblique muscle. 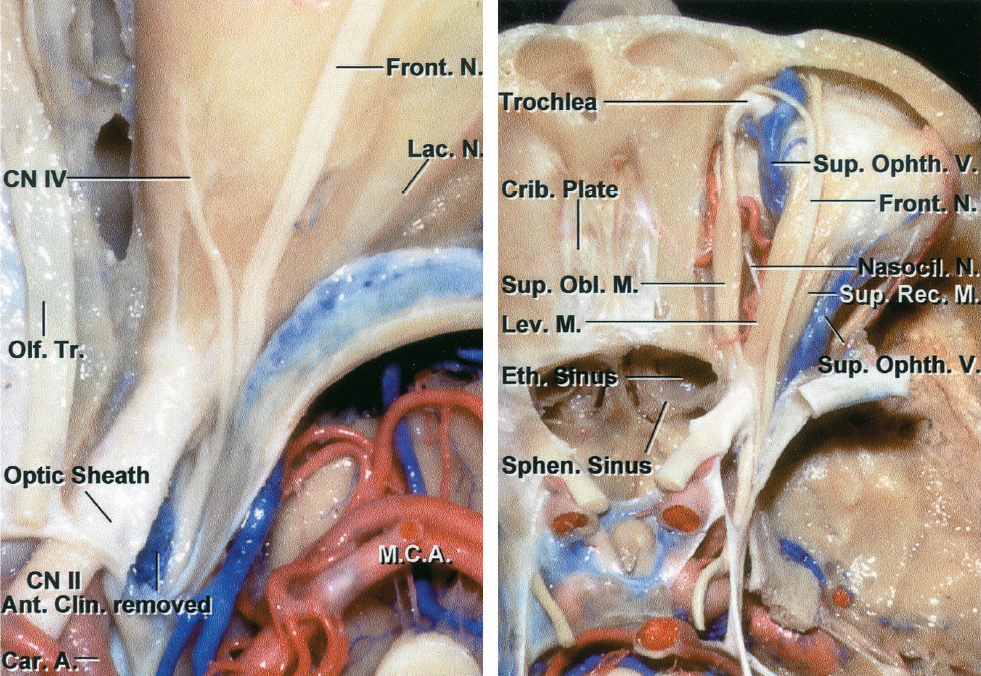 Figure 3: The regional anatomy of the right orbit from a superior view is shown. Please see above text for more details (images courtesy of AL Rhoton, Jr). 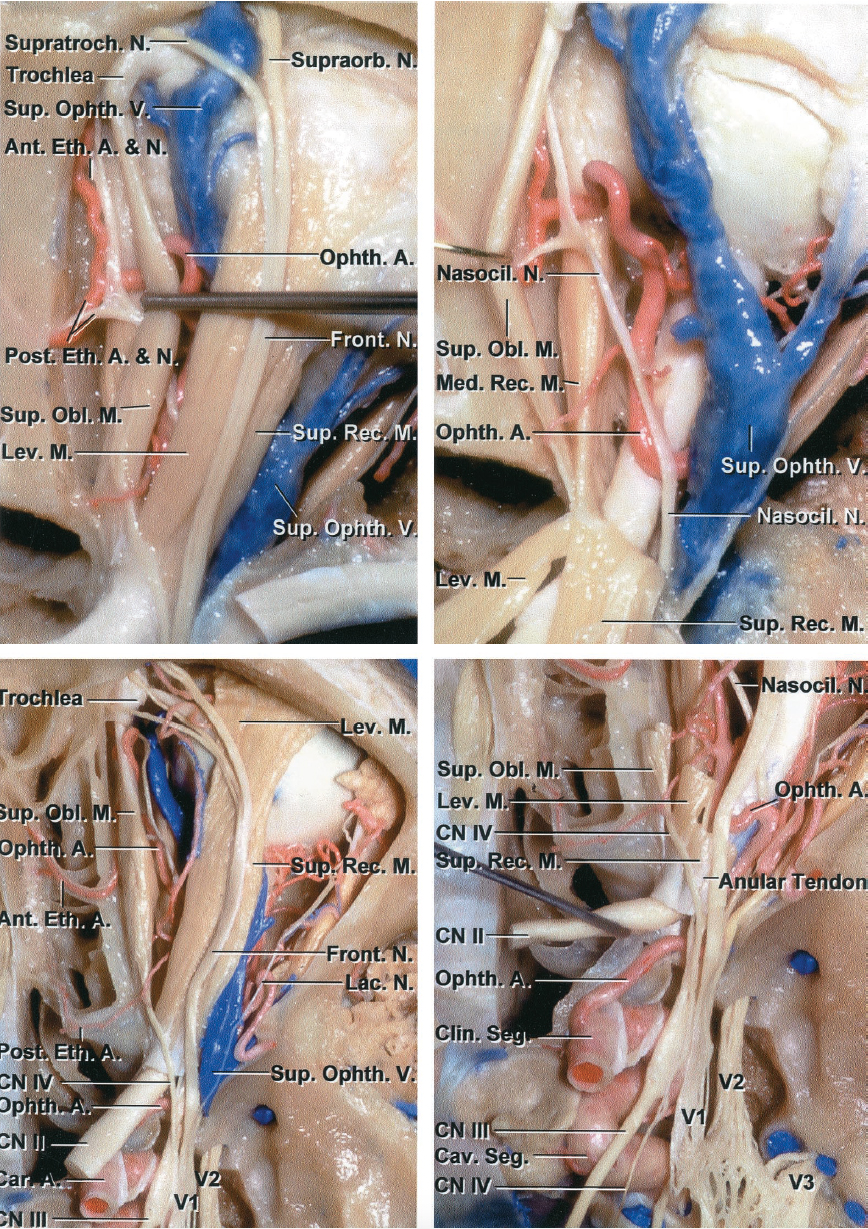 The orbit is a three-dimensional structure that may be divided into three potential spaces: intraconal, extraconal, and intracanalicular. The orbit may be accessed through multiple approaches, but mainly via the transcranial, extracranial, and endoscopic corridors. The selection of the surgical approach is determined by multiple factors, including the type of tumor and its expected adherence and texture, size, location, and extension into adjacent compartments.

Lesions in the medial posterior third of the orbit are explored via a semilunar fold or caruncular incision, with or without disinsertion of the medial rectus muscle, a direct cutaneous incision, lateral orbitotomy, and medial conjunctival incision. Another option is an orbitozygomatic craniotomy that can provide a relatively panoramic view of the orbital contents.

Cranio-orbital lesions such as en plaque sphenoid wing meningiomas that invade the orbit are discussed in the Lateral Sphenoid Wing Meningioma chapter.

I use the modified orbitozygomatic craniotomy (OZ) for tumors located near the orbital apex or those involving multiple compartments including the orbit.

Extradural dissection is performed to properly unroof the orbit. The optic nerve is typically decompressed via an extradural clinoidectomy so that the nerve is not inadvertently compressed at its foramen during manipulation of the tumor. The extent of superior and lateral orbital wall resection depends on the breadth of the tumor in the region. Lumbar cerebrospinal fluid (CSF) drainage allows safe brain mobilization and minimizes the risk of dural injury.

I incise the periorbital fascia over the tumor while avoiding injury to the superior rectus and levator muscles. Very rarely, the frontal lobe dura is also incised if the tumor extends through the optic canal and into the intracranial space. The falciform ligament is released to further decompress the optic nerve at its canal.

Proper localization of the intraorbital tumor may be performed by intraoperative ultrasound; digital palpation is adequate. Blunt dissection of the orbital fat using Q-tips is reasonable. Self-retaining retractor blades are not needed. Resection of the tumor follows the general principles of tumor microsurgery.

It may be necessary to open the annulus of Zinn for tumors medial or dorsal to the optic nerve. The opening should be limited to the medial insertion points of the levator and the superior rectus muscles to avoid the branches of the oculomotor nerve. The trochlear nerve should be preserved, if possible.

In my experience, it is not necessary to reconstruct the orbital roof after resection unless more than 75% of the roof has been removed. To avoid postoperative endophthalmus, I partially reconstruct the roof using custom implants that were prepared preoperatively.

Periorbital ecchymosis and swelling respond to cold compresses within a few days. Severe ecchymosis may occur, and care should be taken to avoid conjunctival injury. A postoperative computed tomography scan should be performed to rule out significant pneumocephalus and intracranial hemorrhage before the patient is transferred to the regular ward. MR images of the orbit assess the adequacy of resection. The patient may feel globe pulsation for a few days postoperatively, which will eventually subside.

Figure 5: This orbital tumor led to progressive vision loss. It was located within the posterosuperior compartment of the orbit near the apex, and was therefore exposed and removed via the modified OZ approach. Note the superior orbital fissure marked with a red arrow; the tumor is evident just medial to this fissure. The periorbita was incised and the schwannoma was dissected and extracted.

The supraorbital craniotomy is favored for surgery on well-circumscribed intraconal and extraconal masses above the optic nerve. This approach is also reasonable to access vascular and neoplastic lesions of the anterior segment of the circle of Willis and parasellar region, respectively.

The orbital rim is mobilized with the lateral frontal/supraorbital craniotomy in one piece. Additional bone is resected along the roof of the orbit to expose the lesion. Tumor exposure, resection and reconstruction of the roof are performed similarly to those described above in the Orbitozygomatic or Orbitofrontotemporal Craniotomy section. 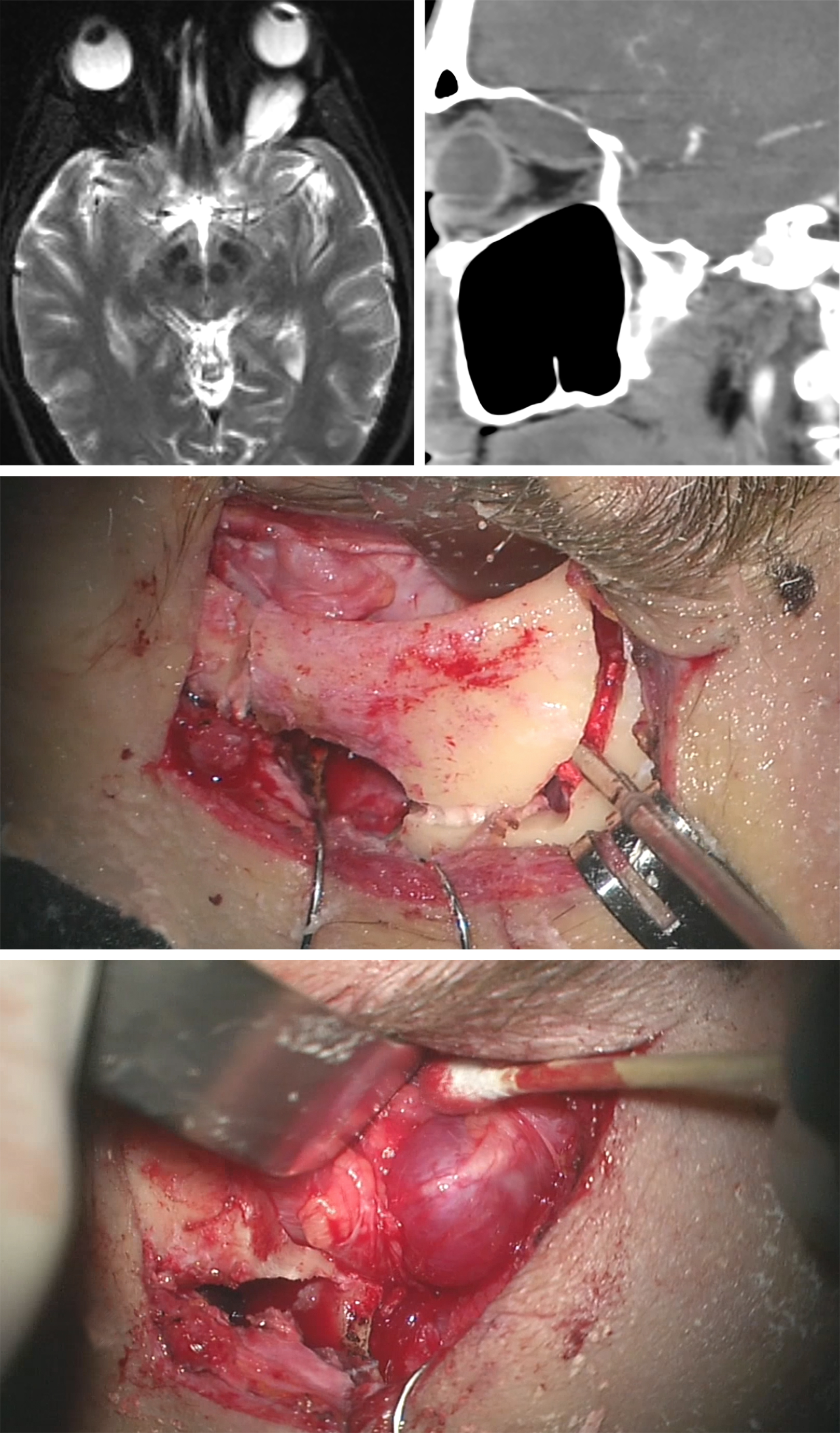 Figure 6: This schwannoma within the superior compartment of the orbit led to proptosis. I decided on a supraorbital craniotomy with an orbital rim osteotomy (middle photo) to remove the lesion. Note the involved nerve on the surface of the tumor (bottom photo).

Kronlein first described a lateral approach to the orbit in 1889. In 1976, Maroon and Kennerdell modified the incision and recommended the use of the operating microscope. The incision is shaped like a hockey stick curved up around the lateral brow. To avoid frontalis nerve injury, the incision should not extend 35 to 40 mm posterior to the lateral canthus. No additional modifications of the incision are necessary for superior, lateral, or inferior intraconal tumors.

The temporalis fascia is incised, starting at the midpoint of the frontozygomatic bone along the skin incision. A curved incision is made over the periosteum of the frontozygomatic bone. The periorbita is dissected from the lateral orbital wall and protected using a malleable ribbon. The temporalis muscle is retracted posteriorly to expose the lateral orbital wall.

A B1 bit without a footplate starts the first bone cut above the frontozygomatic suture and disconnects the lateral orbital rim along with the frontozygomatic bone. Another cut is made 1.5 cm inferior to the first cut to finish the lateral orbitotomy. The drill is used to remove additional parts of the sphenoid bone and obtain further apical exposure.

The periorbita is exposed and incised over the bulk of the tumor above or below the lateral rectus muscle. Mobilization of the lateral rectus muscle allows more control over the tumor capsule. The muscle is not dissected directly to avoid scarring and restriction of eye movements. The rest of the dissection is performed similar to those used for the other orbital tumors mentioned above.

Extended endonasal approaches are recommended for orbital tumors located in the medial and inferior half of the orbit. The main endonasal route to the orbit is through the lamina papyracea. The transmaxillary extraconal approach is an alternative route.