Cavernous malformations (CMs) occur in the same relative proportions as the central nervous system (CNS) tissue volume, with 80% within the supratentorial space.

Many supratentorial lesions are found incidentally on magnetic resonance (MR) imaging before the patient develops clinical symptoms. They are frequently located within the cortical or subcortical regions adjacent to eloquent areas. Only about 5% of supratentorial CMs occur deep in the thalamus or hypothalamus.

Improvements in intraoperative image guidance and the development of innovative operative corridors associated with minimal transgression or retraction of normal neurovascular structures have allowed more effective excision of deep CMs and expanded the operative indications for symptomatic lesions.

Although many supratentorial CMs are found incidentally on MRI, the more classic symptoms prompting imaging are seizures and progressive neurologic deficits due to recurrent hemorrhages. Among patients in their 20s and 30s, the most frequent clinical presentation is seizures.

Medical management may be used as the first line of therapy if seizures are the only manifestation of the CM and the risk of surgery is not minimal. Importantly, the natural history of these lesions must be balanced against the risks of surgery.

Some studies advocate for early operative intervention because better surgical outcomes have been shown soon after the onset of the first seizure. However, the annual hemorrhage risk is low (0.25% to 0.7% per person per year) in patients with no previous symptomatic hemorrhage or with asymptomatic presentation. In addition, CMs rarely cause large life-threatening hemorrhages compared with arteriovenous malformations.

If there are associated arteriovenous malformations (AVMs) or dural arteriovenous fistulas, a preoperative angiogram may also be necessary. If the CM is situated in or near the sensorimotor or language areas, a functional MRI may guide the surgeon to the location of the corticotomy and subcortical dissection to reach the CM while preserving neurologic function.

Figure 1: A right-sided frontal CM in a child with medically refractory seizures is shown. This mass was removed and the child has remained seizure free for 5 years.

Figure 2: A left temporal CM in a patient who presented with a seizure. Note that the mass resembles a thrombotic aneurysm on the T2 weighted sequences (left), but this differential diagnosis was was excluded using a preoperative arteriogram. The results on the enhanced sequences resemble those of a high-grade glioma (right).

Each patient must be evaluated individually based on several factors, such as his or her symptoms, lesion location and approachability, natural history, and comorbidities. Symptoms that may lead the clinician to offer surgical excision include more than one symptomatic hemorrhage, seizures refractory to medical management, mass effect, and the presence of progressive or fixed neurologic deficit.

Although debated, some studies have also shown that pregnant women and women trying to conceive may require resection because there is an increase in hemorrhage risk during pregnancy.

Due to the benign natural history of CMs without extracapsular hemorrhage, asymptomatic lesions may be followed with serial imaging. Lesions showing progressive enlargement should be considered for surgical resection, whereas asymptomatic nonprogressive lesions can continue to be observed.

For supratentorial lesions, neurophysiologic monitoring should be considered for lesions in or near eloquent locations, including the central lobule. Somatosensory and motor evoked potential monitoring can be helpful and may alter the location of the corticotomy, direction of white matter dissection and operative maneuvers, including retraction vectors.

Cortical stimulation mapping may also guide the location of the corticotomy and subcortical dissection. Since all CMs have well-defined borders, their extent of resection is not guided by mapping data.

Intersulcal dissection may obviate the need for mapping during resection of relatively superficial lesions, especially in more diffuse functional areas, namely the language and speech cortices.

The majority of supratentorial CMs may be resected with minimal surgical morbidity via microsurgical techniques and minimally invasive trajectories. Intraoperative image guidance is an important component of CM surgery.

Total resection of the CMs is the goal of surgery because subtotal resection may in fact deteriorate the natural history of the CM. A careful examination of the resection cavity is imperative. Fortunately, CMs are typically well demarcated, thus allowing their extracapsular dissection from the surrounding parenchyma.

Most lesions can be removed easily by dissecting their capsule and removing them en bloc. Large lesions may require piecemeal dissection to reduce traction on the normal parenchyma around the lesion and minimize the need for expansion of the operative trajectory.

Developmental venous anomalies (DVAs), commonly associated with CMs, may potentially increase the risk of CM hemorrhage. The DVA is typically spared during removal of CMs to prevent the risk of venous infarction. In contrast, other studies suggest that coagulation of the DVA may result in a decreased risk of CM recurrence. The association of vascular malformations and CMs is still under investigation. 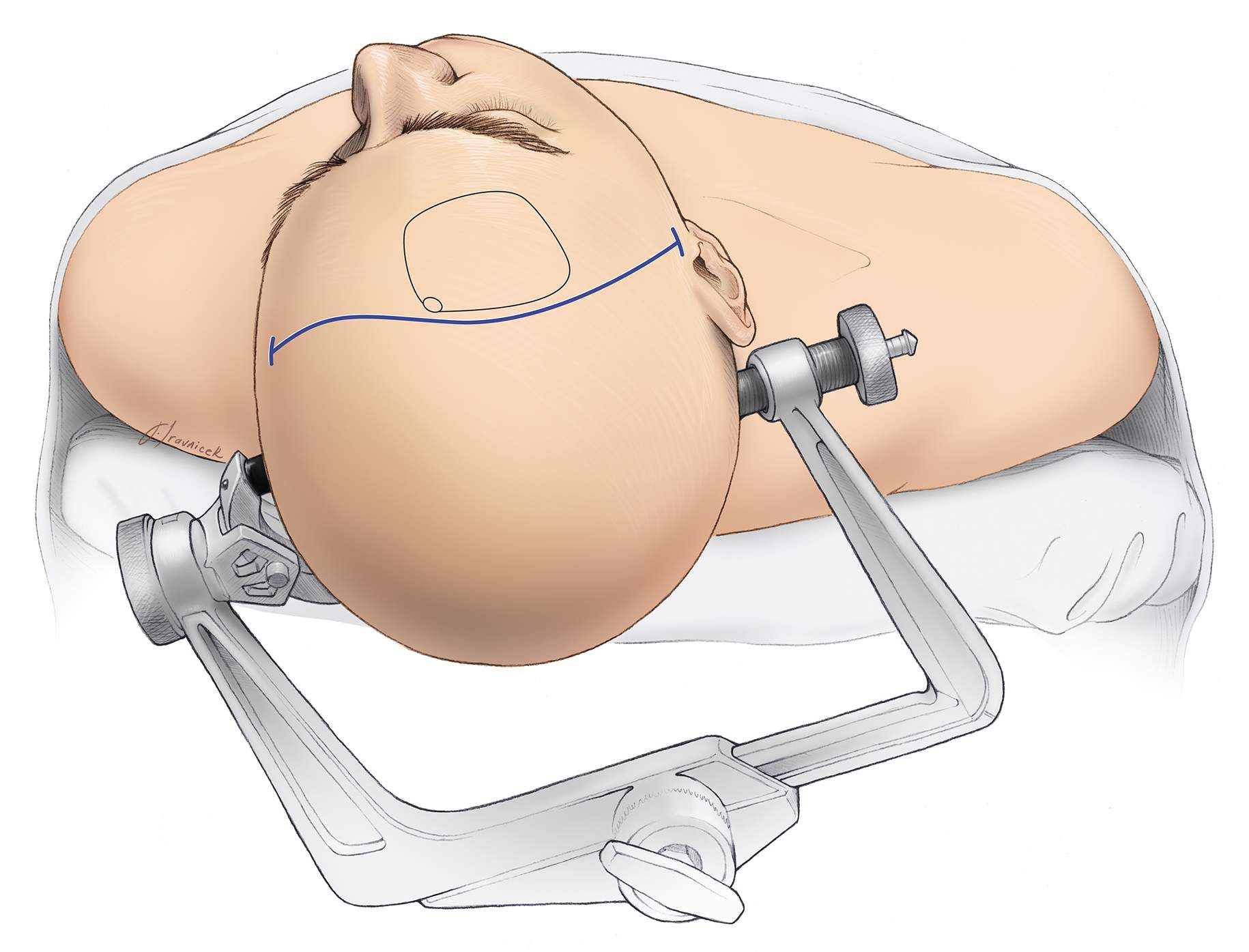 Figure 3: A right frontal craniotomy is planned for resection of a large CM. The incision is limited to the area behind the hairline, and the location of the bone flap is outlined. 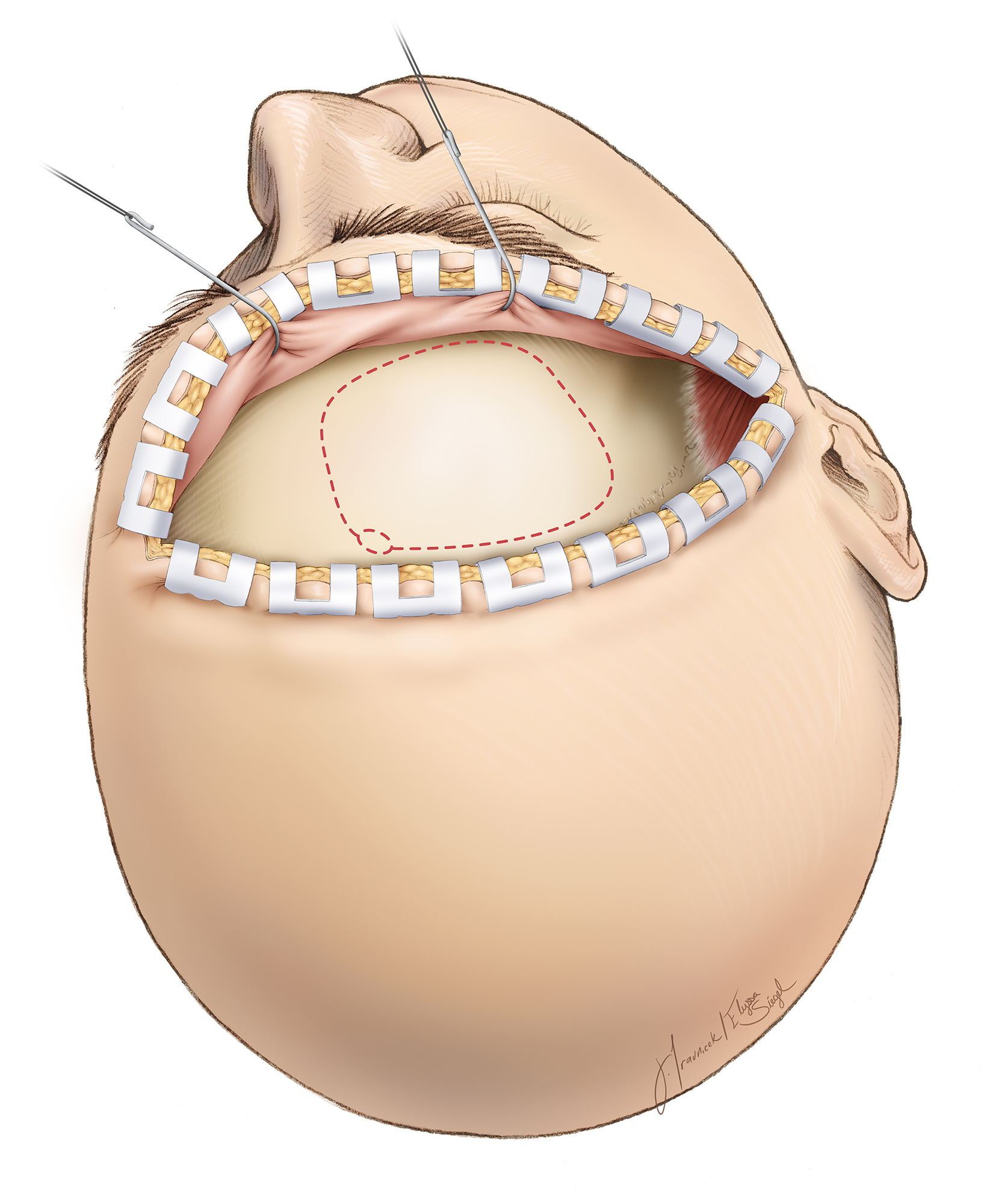 Figure 4: The scalp flap is reflected anteriorly. Navigation guides the location and extent of craniotomy. 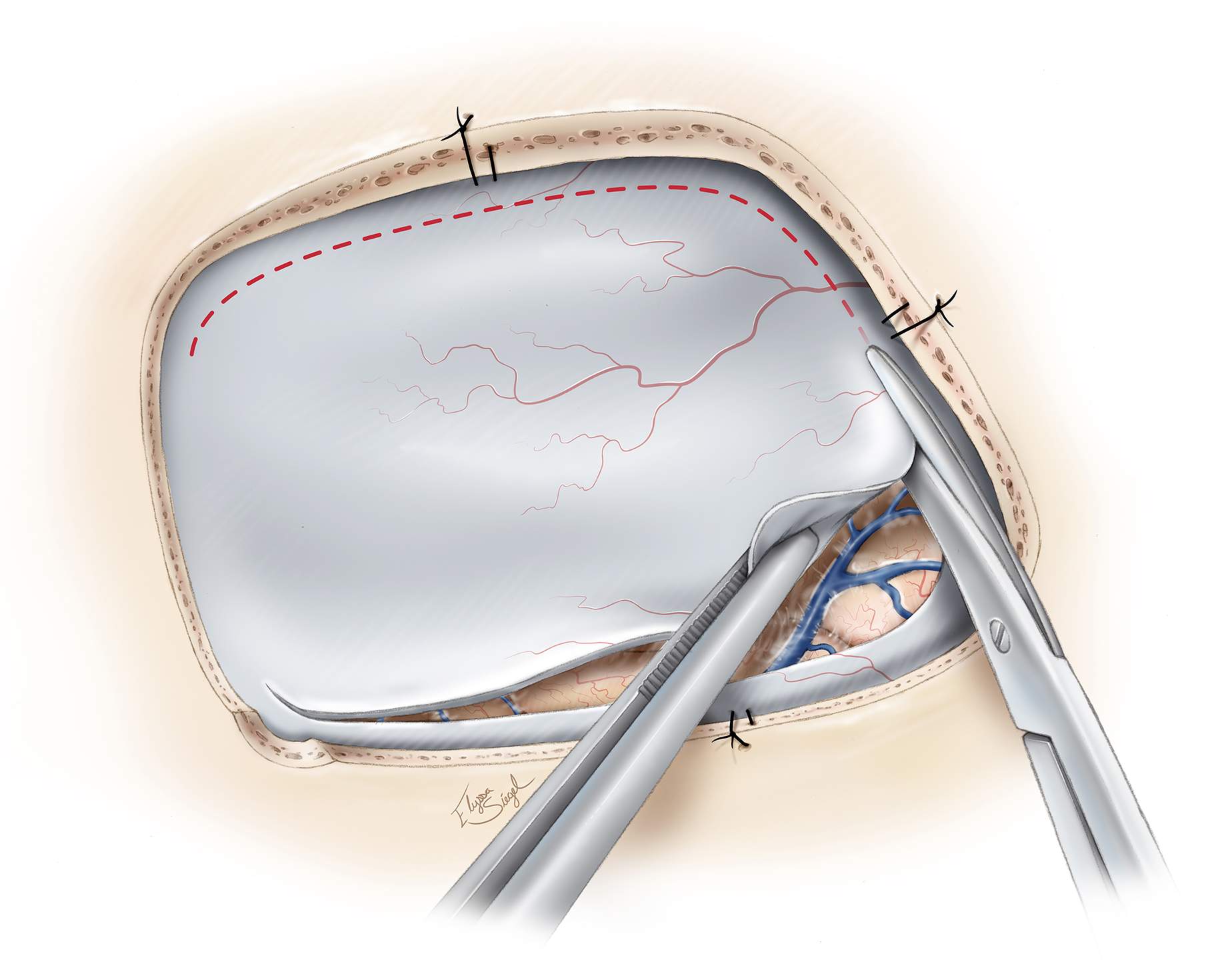 Figure 5: The dura is incised in standard fashion. 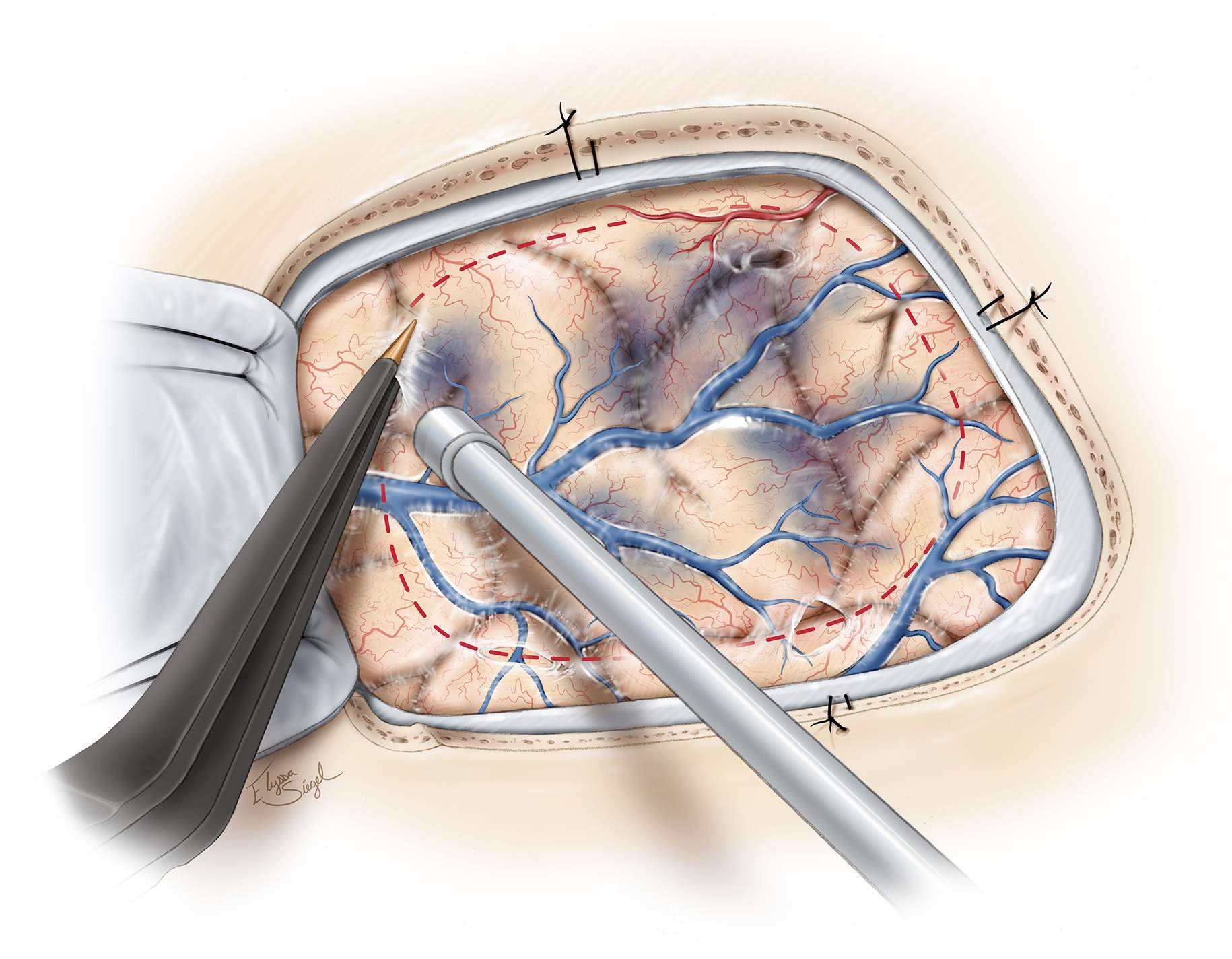 Figure 6: The superficial borders of the CM are outlined using bipolar coagulation and intraoperative image guidance. 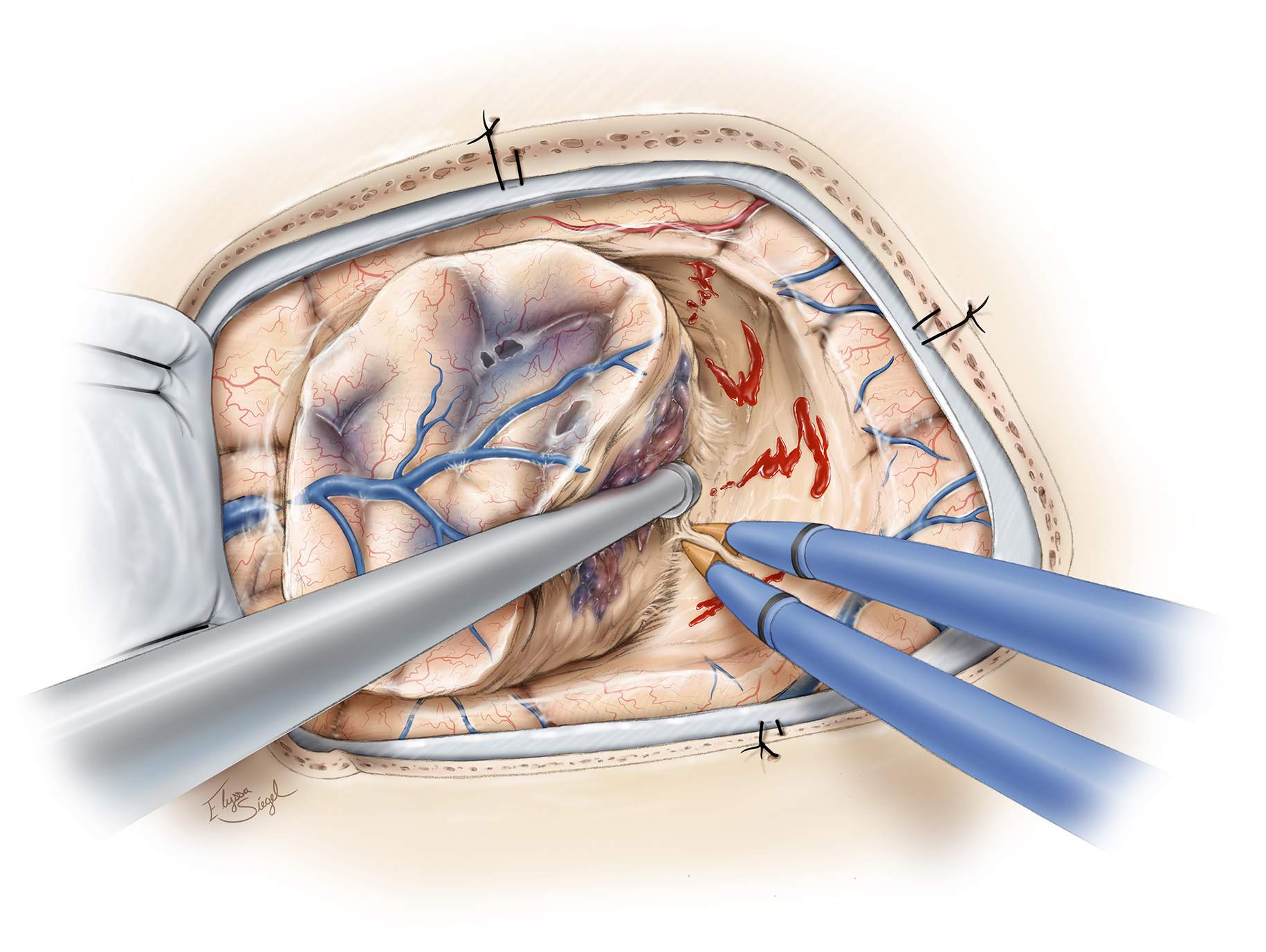 Figure 7: The malformation is disconnected from the surrounding white matter tracts. Pockets of hematoma at various stages of organization are encountered and evacuated. Subcortical dissection is maintained close to the wall of the nidus. CMs do not own high-flow feeders and their dissection does not involve significant bleeding.

The following steps are important for resection of CMs: 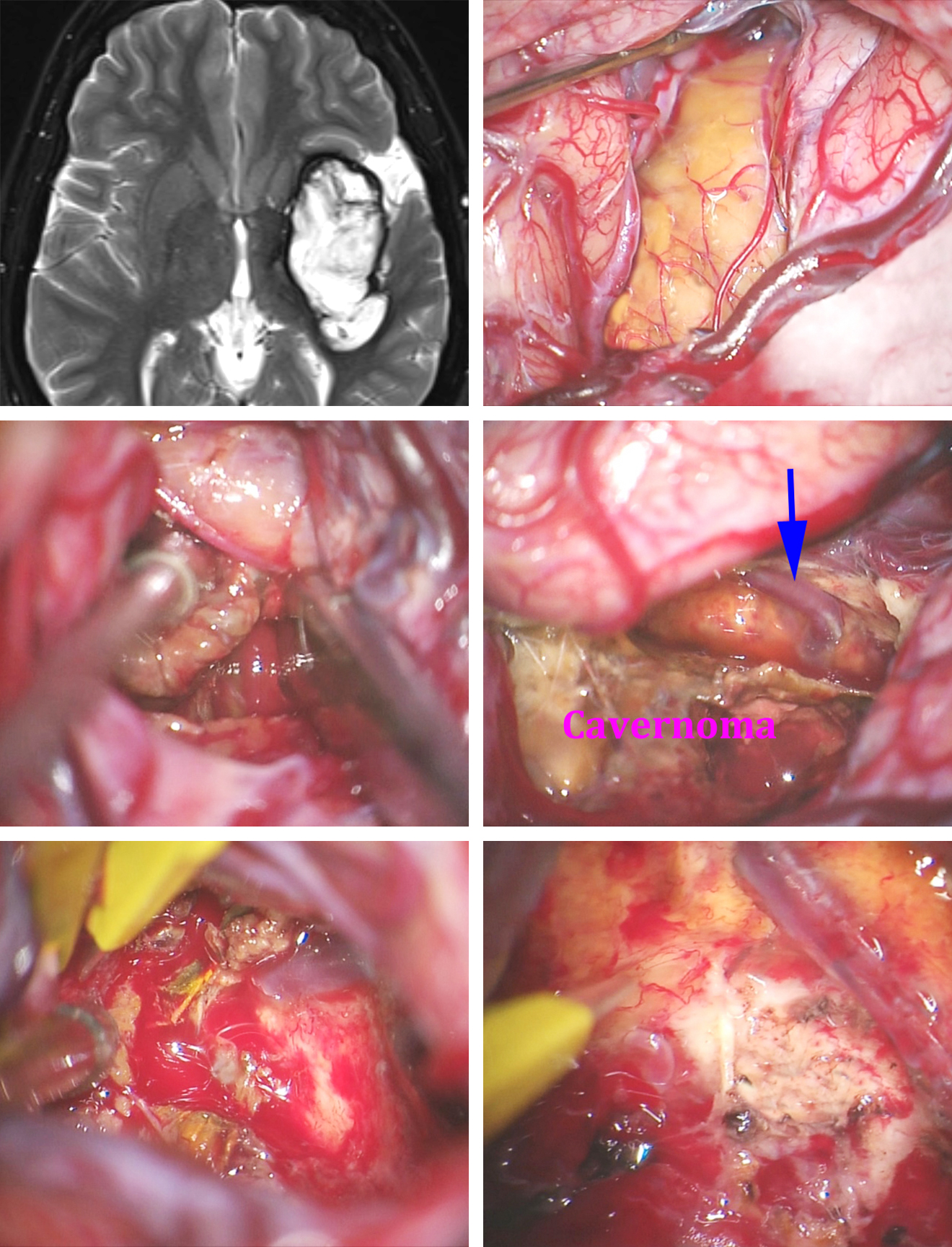 Figure 8: Resection of a left-sided insular CM is shown. The transsylvian approach unveiled the lateral capsule of the malformation after the MCA branches were mobilized (upper photos). I evacuated the contents of the capsule using pituitary rongeurs and mobilized the capsule away from the gliotic margins and the developmental venous anomaly (middle row-blue arrow). After gross total removal of the capsule, minor residual CM was encountered upon careful inspection and was removed (lower row). The resection cavity only contained gliotic margins without any evidence of malformation (lower right photo). 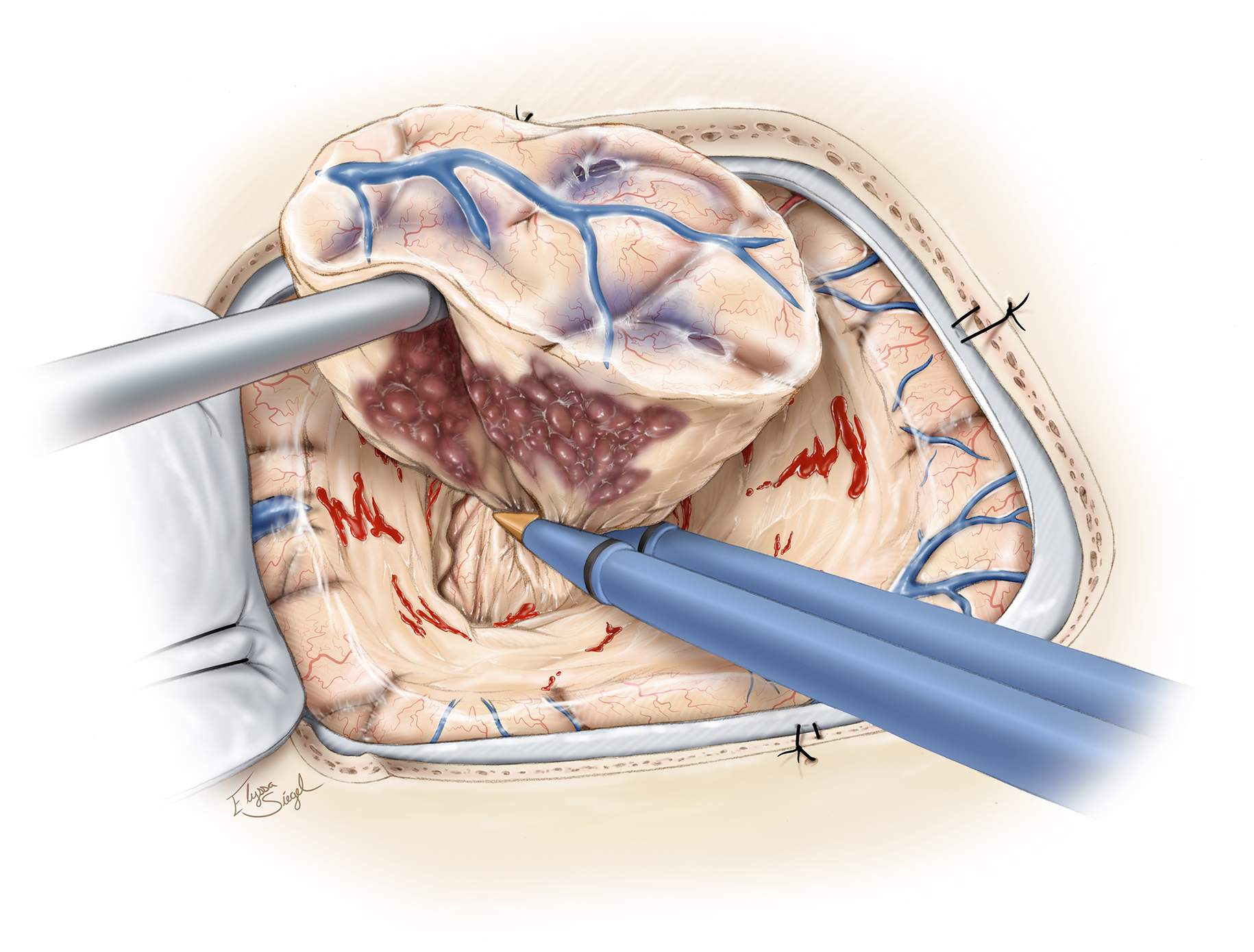 Figure 9: After complete dissection of the lesion around its capsule, the CM may be removed en bloc. This maneuver may not be safe in functional cortices, deep subcortical regions or the brainstem where limited operative trajectories require piecemeal removal of the mass. 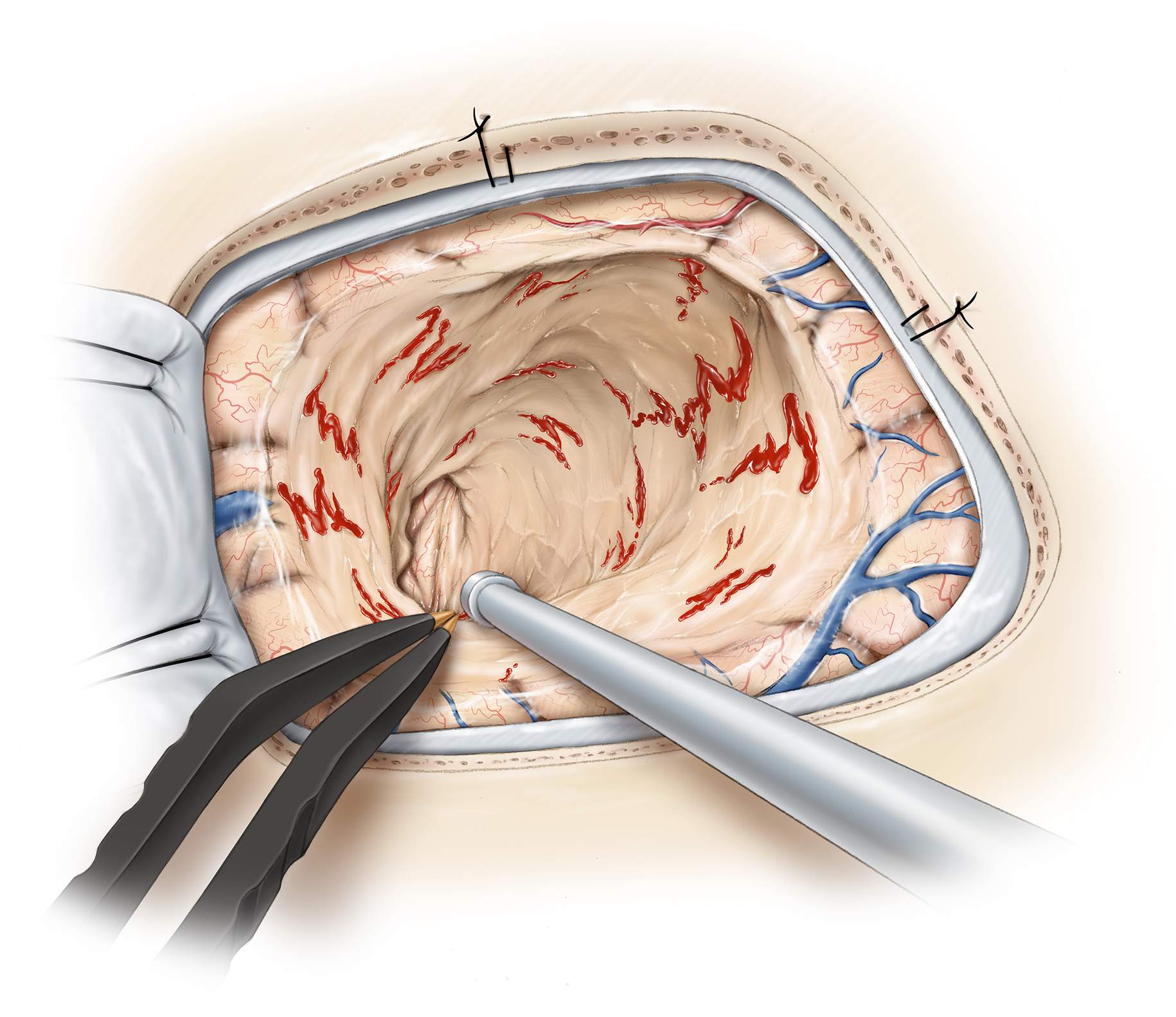 Figure 10: A careful examination of the resection cavity is warranted to exclude any remnants. The opening into the right frontal ventricle is apparent. The surrounding rim of the hemosiderin-laden gliosis should be resected as this maneuver provides the best opportunity for seizure freedom after surgery.

The hemosiderin-laden rim is left intact for brainstem and deep subcortical CMs because the high eloquence of the region precludes removal of the perilesional area.

I monitor most patients in the intensive care unit overnight. A postoperative MR imaging is important to confirm gross total resection of the CM, provide baseline imaging for future comparison, and advance the learning process for the operator.