Central nervous system (CNS) involvement with lymphoma is categorized into primary and secondary subtypes. These are vastly different clinical entities and therefore will be discussed separately in this chapter.

Primary CNS lymphoma (PCNSL) is an uncommon subtype of extranodal non-Hodgkin lymphoma involving the brain, leptomeninges, eyes, or spinal cord without systemic disease. PCNSL is seen annually in approximately 3% of patients diagnosed with primary brain tumors. These tumors represent about 1% of all non-Hodgkin Lymphomas and have an annual incidence of 0.47 per 100,000 person/year. PCNSL tends to present around 50-60 years of age in immunocompetent individuals and around 35 years of age in immunocompromised individuals.

Immunocompetence of the patient is a differentiating feature in PCNSL regarding the pathophysiology and prognosis. Immunodeficiency is the most significant risk factor for PCNSL, including HIV infection, congenital immunodeficiency, and medication-induced immunosuppression. Epstein-Barr virus is theorized to be a causal agent for development of PCNSL given its near universal presence in both immunocompromised and immunocompetent patients suffering from PCNSL. Although rarely observed, PCNSL can metastasize outside the neuroaxis.

Secondary CNS lymphoma (SCNSL) is most commonly observed in late-stage systemic lymphoma. Therefore, it often manifests as diffuse leptomeningeal disease along the neuroaxis. Given that approximately 60% of newly diagnosed cases of lymphoma are non-Hodgkin’s, SCNSL is more commonly observed among non-Hodgkin lymphoma patients. This presentation usually demonstrates evidence of lymphomatous meningitis and leptomeningeal spread on initial imaging evaluation. This is in contrast to PCNSL which more commonly presents with parenchymal lesions.

Presenting features of patients with PCNSL may be categorized based on the region of the CNS affected, either the cerebrum, leptomeninges, spinal cord, or ocular apparatus. Cerebral PCNSL most commonly presents with focal neurologic deficit. Other less common features include neuropsychiatric manifestations, symptoms of elevated intracranial pressure (including headache, nausea, lethargy, or confusion), seizures, and vision anomalies.

Secondary CNS lymphoma commonly present similar to the leptomeningeal disease subtype of PCNSL, as described above, given its often diffuse involvement of the neuroaxis.

The physical examination findings of PCNSL are diverse and highly dependent on the tumor location. A neurological examination should be performed to evaluate for cranial nerve palsies and focal deficits. An ophthalmologic examination identifies ocular involvement. Men should be given a testicular examination to check for testicular lymphoma given the high correlation.

Magnetic resonance (MR) imaging with contrast of the brain is essential to characterize the extent of disease. Computed tomography (CT) scan of the chest, abdomen, and pelvis is needed to rule out any other primary lesion that may be presenting with a metastatic spread. Based on the MR evaluation, if CNS lymphoma is considered likely on the differential diagnosis list, a large-volume lumbar puncture for cerebrospinal fluid (CSF) flow cytometry study should be performed. This can circumvent the need for a parenchymal biopsy if the diagnosis is confirmed. Given the strong association between CNS lymphoma and immunodeficiency, HIV testing is essential. Testicular ultrasound is also recommended. 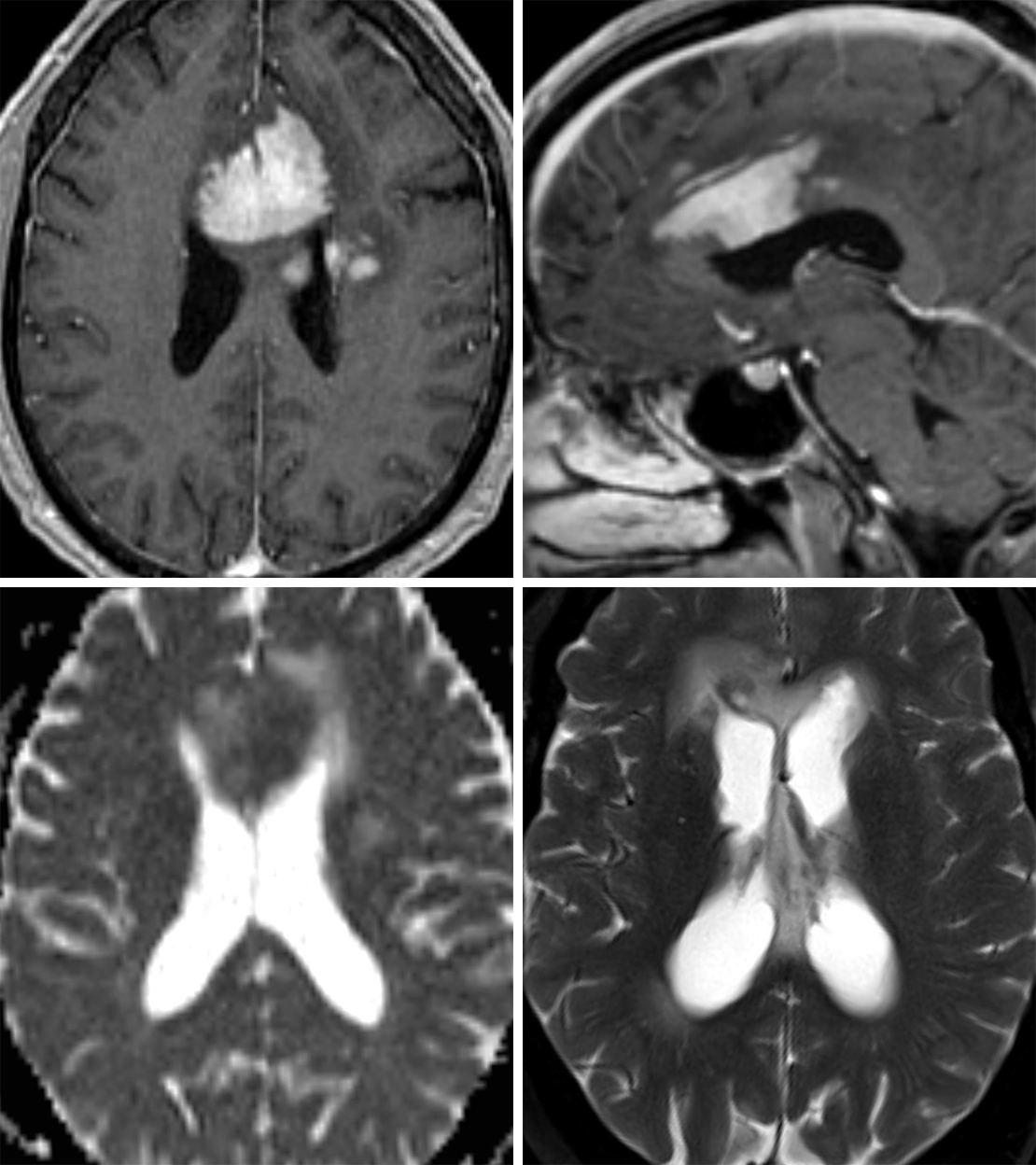 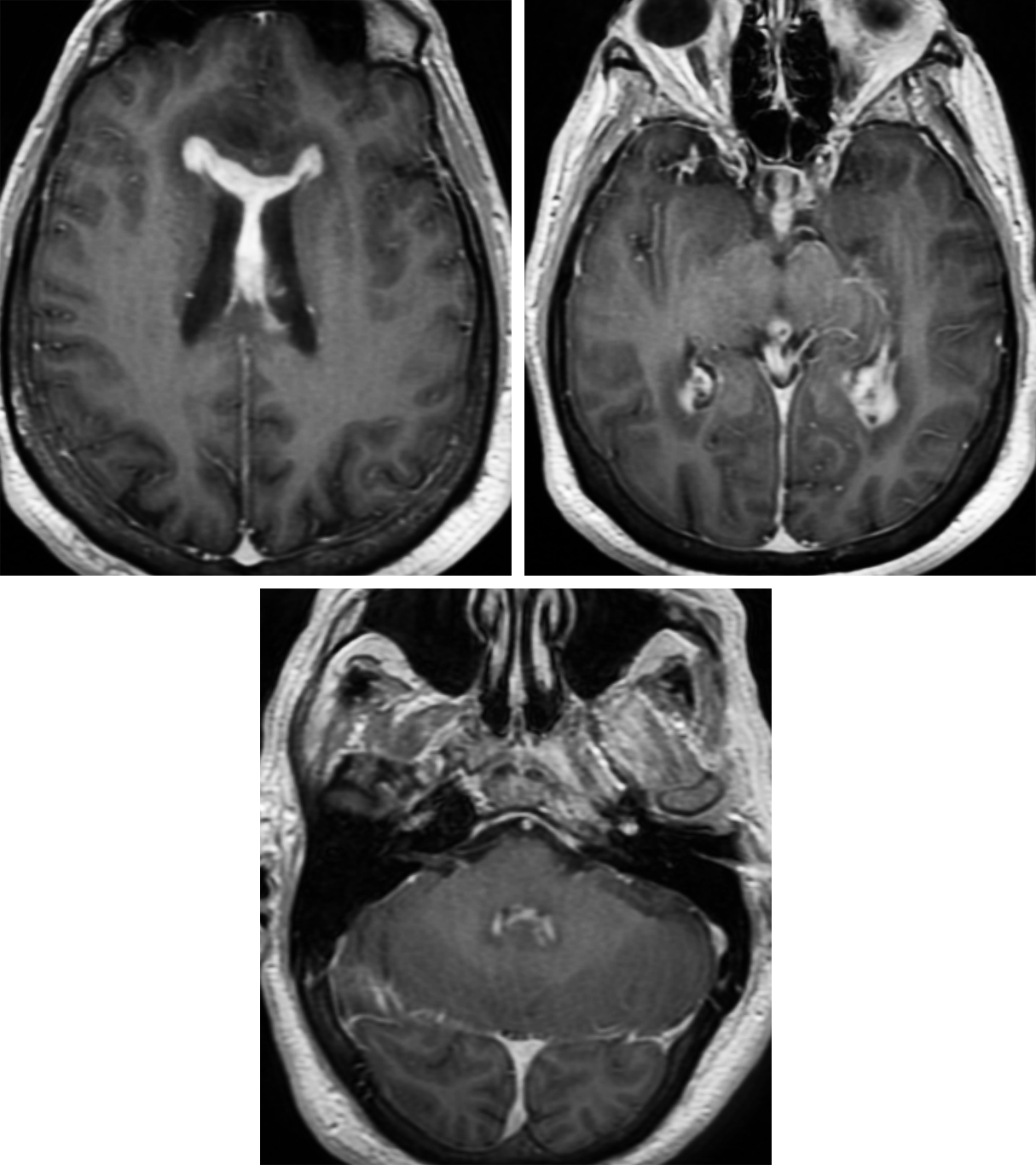 Figure 2: The homogenously enhancing lesion is based on the intraventricular septum and rostrum of the corpus callosum (top left). Enhancement consistent with leptomeningeal metastasis is also demonstrated within the bilateral dependent portion of the lateral ventricular atrium (top right). Leptomeningeal enhancement is also demonstrated within the fourth ventricle (bottom).

Neurosurgical intervention for CNS lymphoma is limited to biopsy for confirmation of diagnosis when indicated and/or placement of a ventricular access reservoir for administration of chemotherapy. Resection of the lesion is not only impractical because of the infiltrative nature of the disease, but also has not been proven to provide any significant benefit. The exception to this standard approach regarding resection is when compression of the brainstem due to tentorial herniation is present. In this situation, resection is justifiable to avoid mass effect on critical structures.

This treatment paradigm has been challenged in a Phase III trial from 2012 conducted by the German PCNSL study group, which showed improved overall survival with aggressive resection of well-circumscribed lesions. Theoretical benefits from this management strategy parallel the dogma of aggressive resection for glioblastomas. However, the current standard of care involves only diagnostic biopsy for lymphoma.

Stereotactic biopsy of the lesion for diagnostic purposes can be undertaken when CSF cytology is insufficient for diagnosis. Stereotactic biopsy is performed using a frameless neuronavigation-guided system. Placement of a ventricular access reservoir for chemotherapy administration is particularly useful for the leptomeningeal subtype of PCNSL and SCNSL.

Corticosteroid therapy must be avoided prior to performing a stereotactic needle biopsy because of its ability to shrink and alter the histopathology of the tumor. Administration of an anticonvulsant is recommended for patients with a potentially epileptogenic lesion, as evidenced by documented seizure activity on electroencephalographic evaluation. The patient’s CT and MRI scans must also be thoroughly analyzed, looking specifically for the tumor’s pattern of enhancement, its involvement of the ventricular system, and the level of edema present.

Stereotactic needle biopsy can be avoided in cases of ocular or CSF involvement, where pathologic evaluation of the eye, vitreous biopsy, or CSF analysis provides an alternative diagnostic route.

The goal of this procedure is to obtain a tissue biopsy in order to establish a histologic diagnosis of PCNSL. For this procedure, the step-by-step process will vary depending on which commercially available frameless or frame-based technique is employed, such as the Medtronic Vertek® biopsy system, BrainLab VarioGuide® or a frame based technique using the Integra CRW® head frame.

The general principles of the procedure are as follows. The patient is usually placed in a supine position with moderate neck flexion and a skull clamp is used. A straight incision is made on the chosen entry site, hemostasis is achieved, and a self-retaining retractor may be used. Next, a drill is used to create a small craniostomy, the dura is incised, and the pia is cauterized.

After the appropriate biopsy depth is determined, the biopsy needle is carefully inserted, advanced, and the surgeon takes multiple tissue cores from four different quadrants within the enhancing part of the tumor. Once the pathologist has confirmed the presence of pathologic tissue, the wound is irrigated and closed. If a nondiagnostic specimen is found, a separate target or trajectory may be necessary.

Corticosteroids are used for reduction of mass effect and associated vasogenic edema. Initial response to steroids is reportedly associated with significantly improved long-term survival. As mentioned earlier, corticosteroid use should be avoided until a definitive diagnosis is secured because it may alter the histopathology of the tumor.

Whole-brain radiation therapy (WBRT) by itself is an inadequate treatment; adjuvant chemotherapy is necessary. Of note, WBRT improves progression-free survival of PCNSL patients, but not their overall survival compared with the results from methotrexate alone. The efficacy of WBRT in controlling disease initially is well documented, but neurotoxicity is a concern. Hence, WBRT is deferred for newly diagnosed patients and not used in patients over age 60. These neurotoxic effects have also led many oncologists to recommend a lower dose of WBRT, although the efficacy of this approach is still uncertain.

Methotrexate (MTX) is the most commonly used chemotherapeutic agent for PCNSL. High dose intravenous administration is standard practice. Intrathecal administration has been utilized but is not superior to high dose systemic intravenous MTX. Methotrexate in combination with temozolamide has also shown benefits in elderly patients.

Studies have demonstrated that chemotherapy combined with WBRT improves overall survival, but detrimentally impacts quality of life due to neurotoxicity. A good initial response to chemotherapy, WBRT, or both correlates with better long-term outcomes. Other treatment modalities include high-dose chemotherapy with stem cell rescue, salvage therapy, and combination monoclonal antibody rituximab. PCSNL is now considered a potentially curable disease in immunocompetent patients due to excellent outcomes with the early administration of high dose methotrexate based therapy.

In cases of SCNSL associated with leptomeningeal spread, intrathecal methotrexate via a ventricular access reservoir is considered standard of treatment.