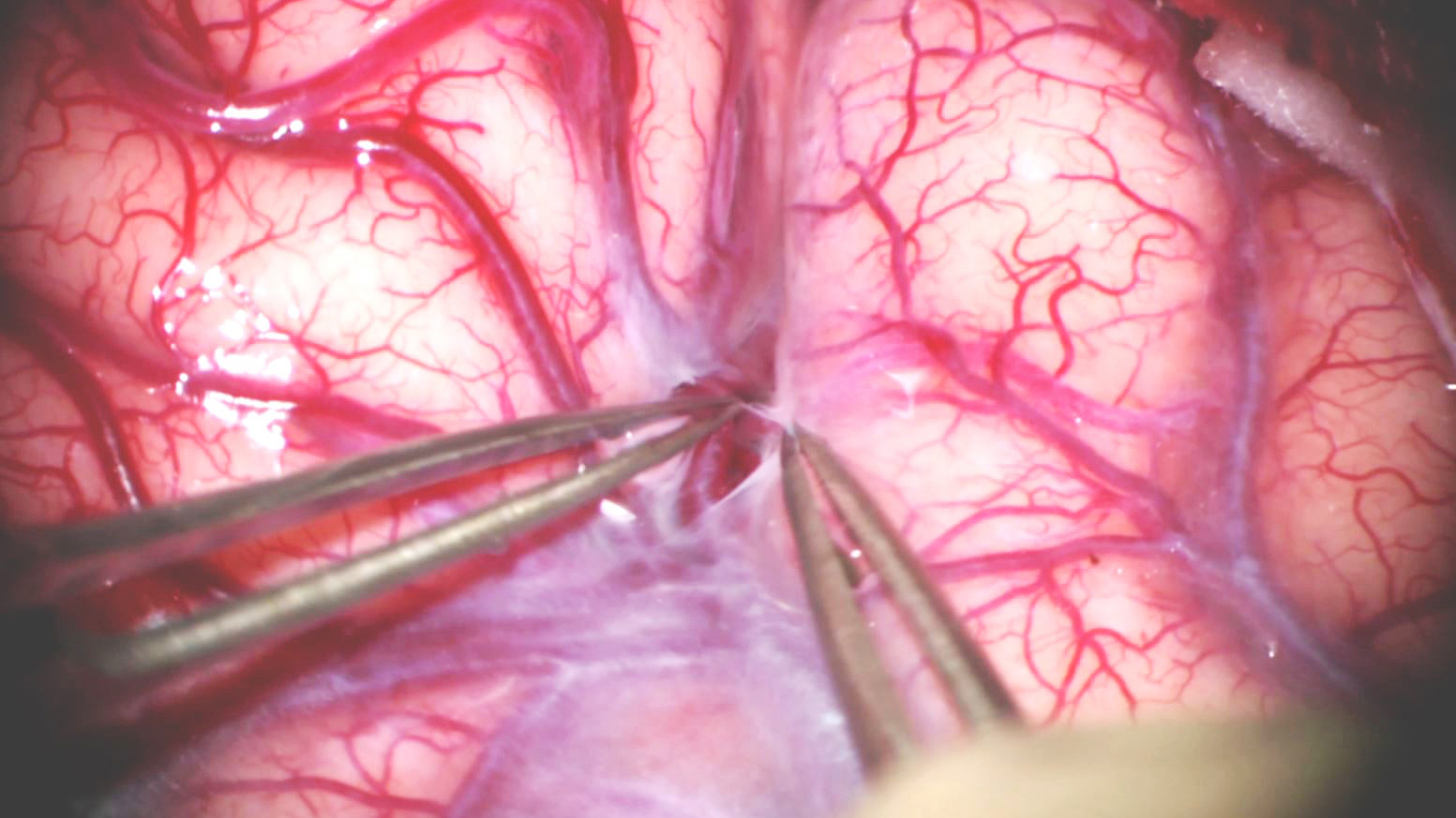 The subarachnoid space contains cerebrospinal fluid (CSF) and is positioned between an outer membrane, the arachnoid mater, and an inner membrane, the pia mater. The pia mater rests on the parenchymal surface of the brain and remains in contact with the brain throughout its gyral folds and sulci. The meningeal layer of the dura mater encloses the arachnoid mater with a small potential subdural space situated between these two membranes.

Although CSF is often considered to be free flowing throughout the subarachnoid space, the aforementioned septations and membranes between the cisternae provide a natural barrier to unimpeded CSF flow. Instead, the membranes contain pores and trabeculations that, in the healthy individual, allow for the unconstrained flow of CSF.

This anatomic architecture has important pathophysiologic implications in aneurysmal subarachnoid hemorrhage (aSAH) because the pores between the cisterns may become occluded with hemorrhage, resulting in CSF build-up and hydrocephalus. Furthermore, the cisternal configuration has important technical consequences in the microsurgical dissection of aneurysms. 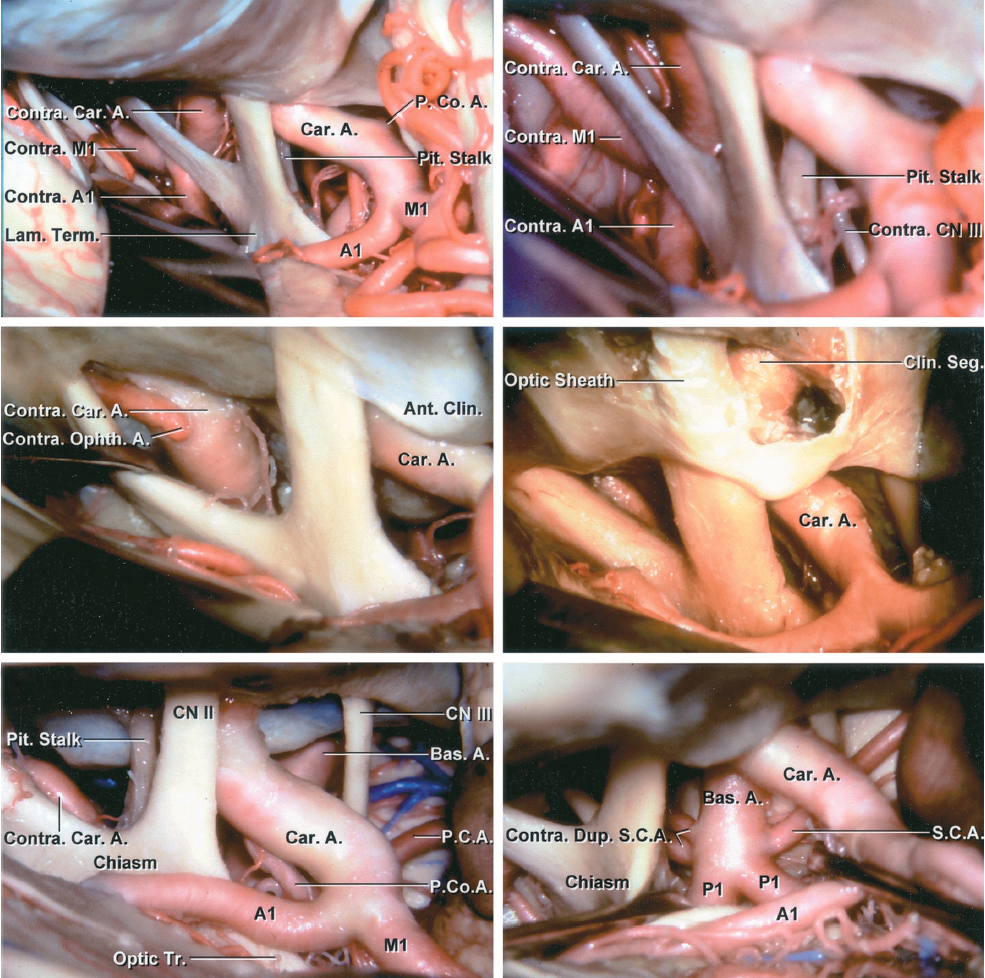 Figure 2: A panoramic view of the basal cisterns containing the circle of Willis is shown. A contralateral reach is possible (left middle row image) through wide dissection of arachnoid membranes. Removal of the clinoid process expands the opticocarotid space (right middle row image). Alternative subarachnoid trajectories around the carotid artery toward the basilar artery are shown (bottom row)(images courtesy of AL Rhoton, Jr).

A vast array of operative tools and microsurgical instruments are available to the cerebrovascular neurosurgeon. However, a successful surgeon is not required to utilize all of these tools, and in many instances would benefit from limiting the tools to a small subset of “special” instruments. Indeed, this small “special set” ensures that the surgeon has all required arsenal at his or her disposal.

The surgeon’s technical expertise facilitates the use of this limited set of instruments to their full potential. This philosophy alleviates the learning curve associated with acclimating to new instruments, advances operative efficiency, and prevents confusion for the operating room staff. In fact, as the operator’s experience accumulates, his or her special set of instruments becomes more limited.

The necessary microinstruments include bayonetted bipolar forceps with a variety of tip sizes, sharp arachnoid knives, fine dissectors, microscissors, and angled, malleable suction devices. Self-retaining retractors should also be available and used transiently during the final periods of permanent clip application, assisting as a “third hand.” 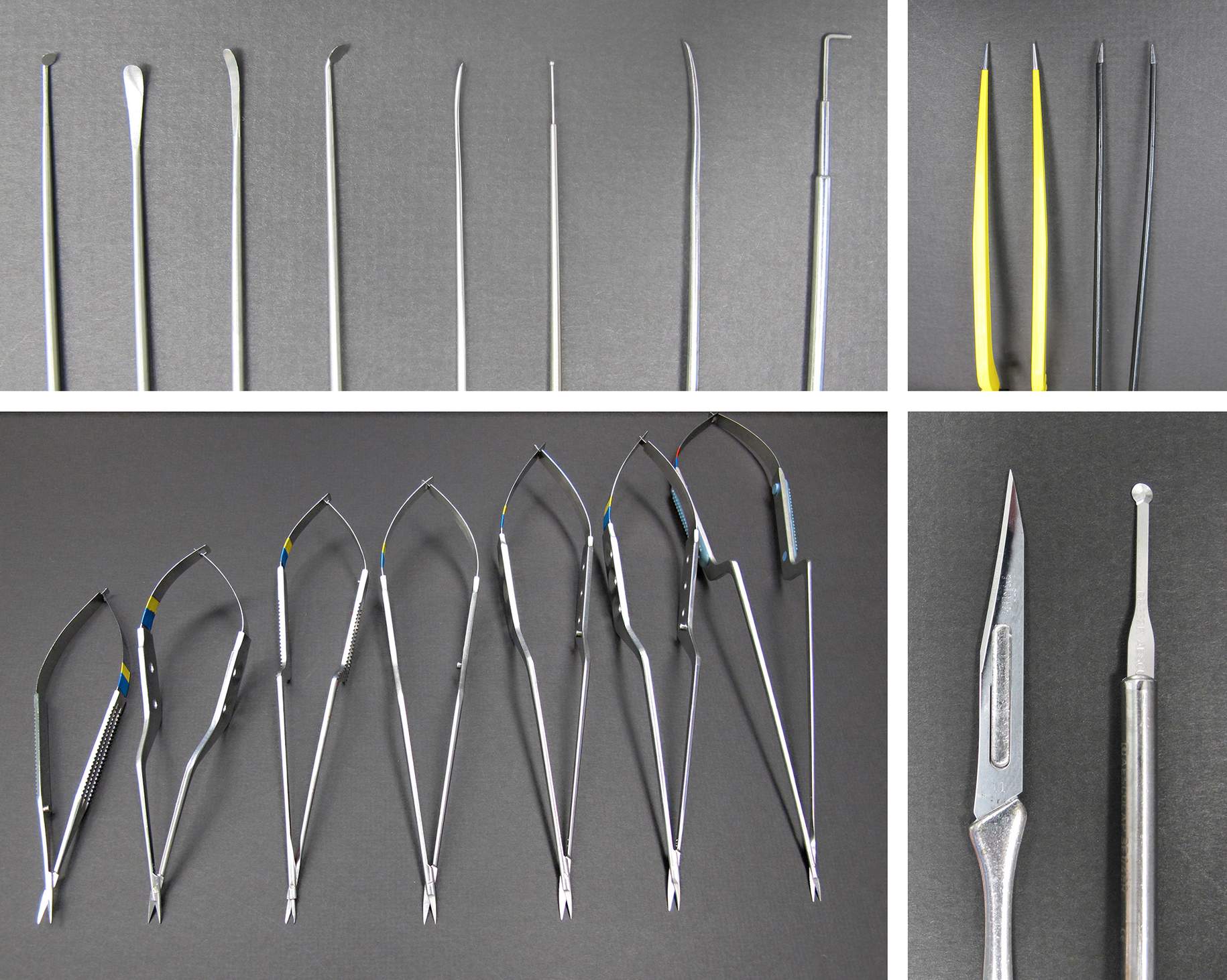 For a review of similar instrumentation used for cranial base surgery, please refer to the chapter on Preoperative Considerations and Instrumentation.

The location of the aneurysm defines the operative path because each artery, major or minor, has a preferred pathway for its safe dissection and exposure. The aneurysm should not be approached directly because this may induce premature rupture of the sac.

The preferred operative path follows the safest route of the artery of interest, usually defined by the artery’s smooth contours, minimal branching, and few perforating arteries. In general, the dome of the aneurysm should not coincide on the dissection path because this will increase the risk of aneurysm rupture. Perforating arteries are especially problematic as they obliterate the plane of dissection.

For example, the inferior and anterior aspects of the MCA are considered preferred dissection pathways; they are mostly smooth and own few perforating branches. In contrast, the superior portion of the MCA owns the lenticulostriate perforators. Violation of these perforators will lead to postoperative neurologic decline and should be avoided at all costs.

In general, most arteries will only supply one lobe of the brain. Once the arterial lobe is identified, the artery may be held in close apposition to that particular lobe without concern of arterial strain when retracting the lobe. For example, during dissection of the Sylvian fissure, an M3 branch may appear to provide feeding vessels to both frontal and temporal lobes, but after its microsurgical isolation, only its loop is adherent to the frontal lobe and its feeding vessels belong to the temporal lobe. This loop may be mobilized toward the temporal side in order to expand the transsylvian corridor.

Regardless of the operative plan or the technical skills of the operating neurosurgeon, aneurysmal rupture is an impending risk. Appropriate precautions must be properly planned and addressed; this complication may occur at any point during the procedure. Additionally, some aneurysms may be preferably approached with the use of temporary clipping on the parent vessel.

Acquisition of proximal control is the sine quo non of vascular surgery and cannot be overlooked. The location of this control should be clearly preplanned. Vascular control is defined as the ability to temporarily occlude an artery or arteries to cease or minimize blood flow within the aneurysm sac. Regional circulatory standstill/arrest is furnished via temporary clip ligation of proximal vessels.

Ideally, vascular control should be established just proximal to the aneurysm neck, resulting in an isolated section of the cerebrovasculature that does not greatly affect other arteries to the parenchyma. Ultimately, the regional anatomy determines the appropriate location of temporary clip application where the perforating arteries are minimally manipulated and the normal circulation of the brain is least disrupted.

There are circumstances when multiple arteries supply the aneurysm sac (such as the anterior or posterior communicating artery complex). In these instances, I temporarily occlude only the dominant feeding artery (dominant A1 and ICA) and allow the other feeding vessels (nondominant A1 and posterior communicating artery) to provide some flow to the distal territories for their protection. However, all feeding vessels are dissected and are available for their possible transient occlusion, if necessary. This conservative temporary clip ligation strategy or low-flow regional circulatory arrest places the distal territories at less ischemic risk.

Premature aneurysmal rupture and anatomic constraints may alter the planned or preferred version of vascular control. In these instances, the position of vascular control is revised to a more proximal location along the vascular tree; this maneuver leads to a more extensive regional inhibition of blood flow and increases the risk of cerebral ischemia in the distribution of multiple branching arteries. Thus, after initial brain mobilization and CSF release, the first goal of the microdissection should be acquisition of proximal vascular control prior to planning aneurysm discovery.

Distal vascular exposure is necessary but its routine clip ligation is not a prerequisite. After proximal ligation, distal temporary clipping is often unnecessary except for certain unique circumstances such as 1) continued overwhelming bleeding from a ruptured aneurysm, 2) persistent aneurysmal turgor that prevents necessary aneurysm deflation, 3) the need to trap the sac to facilitate suction decompression, or 4) the need to open the sac to facilitate clipping, via thrombectomy or coil removal.

Distal control should occur naturally during the circumdissection of the aneurysmal pathoanatomy; for example, all efferent arteries should be identified and accounted for before final clip ligation.

If reasonable proximal vascular control cannot be reliably secured because of intraoperative findings and/or anatomic considerations, the surgeon must be prepared to exert other forms of control. For example, the cervical internal carotid artery may be prepared for proximal paraclinoid aneurysms. It may also be necessary to prepare femoral access and use a balloon-tipped catheter to occlude blood flow in certain parent vessels, such as the basilar artery, in the case of more proximal basilar bifurcation aneurysms.

Ultimately, temporary cardiac arrest may be used in select cases. Adenosine-induced transient asystole can be effective and safe during predissection intraoperative sac rupture and when operating on giant aneurysms with anatomically unavailable proximal control. This mode of control provides only transient (30-60s) vascular stasis.

The planning and implementation of the operative plan may not directly coincide. SAH spoils the previously clear subarachnoid spaces and planes and greatly interferes with visualization of the vasculature. The evacuation of a SAH clot should commence at known arterial landmarks and move outward. The clot should be removed with irrigation and gentle suction.

Once proper visualization of the relevant anatomic structures is achieved, the brain parenchyma should be properly mobilized using dynamic retraction, not forceful fixed retraction. Dynamic retraction is founded upon generous dissolution of the cisternal membranes via sharp dissection and the gentle spring action of bipolar forceps. Tight dissection spaces should be first probed with fine, blunt dissectors to discover and procure initially invisible arachnoid planes.

Once the natural arachnoid planes are widened and gentle tension can be properly applied to the brain without its significant deformation, the microscissors may be used to break up any remaining bands of subarachnoid tissue. Mobilization and egress of the CSF provides tremendous assistance with brain mobilization.

I usually use the tips of microscissors to separate the arachnoid membranes from vascular elements; next, I use the blades to cut the isolated arachnoid bands. This minimalism in instrument use adds to operative efficiency. The lower jaw of the scissors lifts up the arachnoid bands before their transection to ensure that no other structure is inadvertently within the jaws.

I use bipolar forceps that incorporate added tensile strength during the closure of their tines. The spring action of the forceps allows opening of the delicate arachnoid layers, especially those within the Sylvian fissure. The forceps are oriented parallel to the vessels and the fissure, not perpendicular. The opening force of the forceps is directed across a sizable surface to prevent pial injury. The use of these forceps for forceful separation of thick arachnoid membranes leads to pial injury; sharp dissection is mandatory in these instances.

Next, the arteries on the cortical surface or within the fissures can be traced down to the basal cisterns and circle of Willis where most aneurysms reside. The tracing of these arteries should follow the aforementioned techniques where a major artery is identified and its safe surface guides the surgeon to approach the aneurysm. The anatomy of the circle of Willis is the decisive map for the aneurysm surgeon.