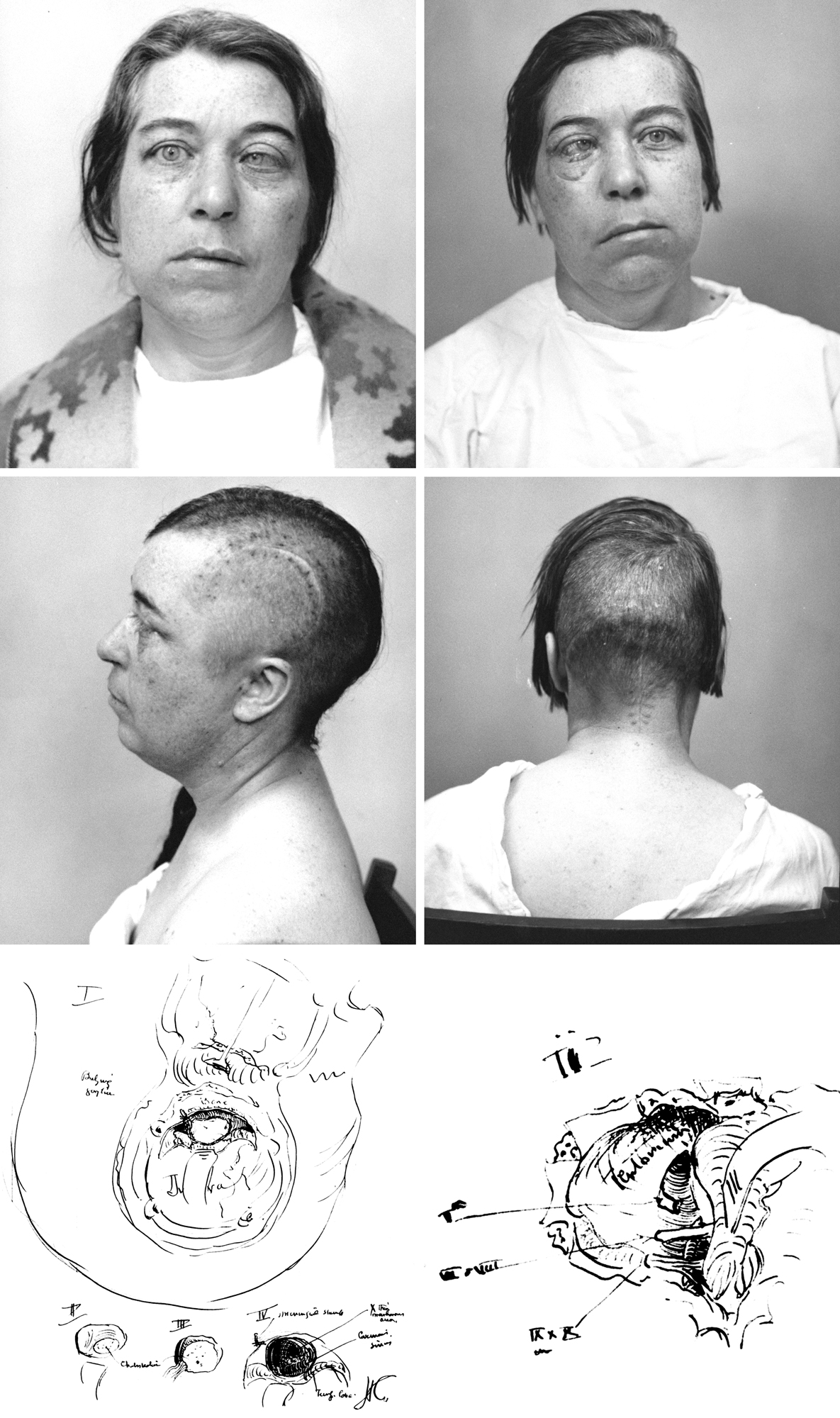 Figure 1: This patient of Harvey Cushing’s underwent a two-stage operation (subtemporal and suboccipital) for resection of a large petroclival cholesteatoma in 1928. This is likely one of the first cases of Cushing’s that demonstrated his technical expertise in handling complex skull base lesions. The upper images depict the patient’s preoperative cranial nerve dysfunctions before both operations. The images in the middle row show Cushing’s incisions for the staged procedures, and the lower images illustrate his intraoperative findings (images courtesy of the Cushing Brain Tumor Registry at Yale University).

During the preoperative planning stages, every aspect of the operation, from preoperative assessment to the patient’s potential postoperative need for rehabilitation, should be investigated.

When necessary, preoperative imaging should include vascular studies—computed tomography (CT) or magnetic resonance (MR) angiography or venography—to assess the location of the arterial and venous structures in relation to the operative corridor and the pathology at hand. Veins at the skull base are vital, and their sacrifice often leads to disabling venous infarction. 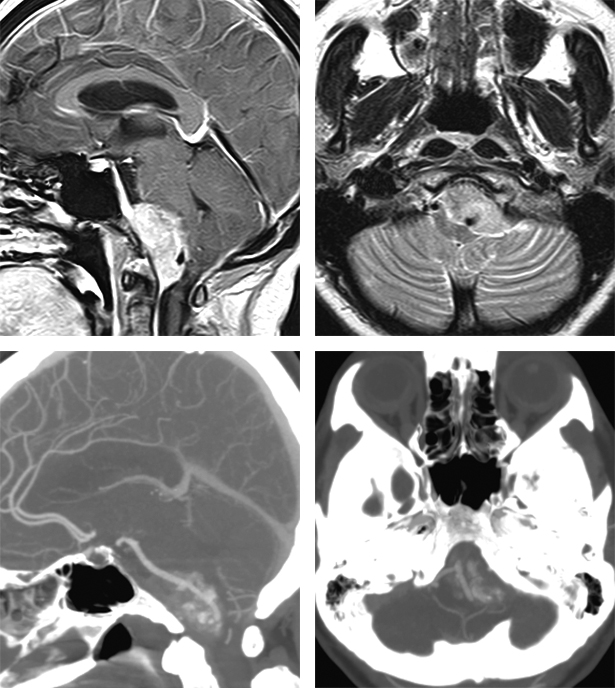 Figure 2: This patient presented with imbalance and cranial nerve XII palsy and was diagnosed with a compressive foramen magnum meningioma. A CT angiogram was very helpful in revealing the extent of tumor calcification and the route of the vertebral artery engulfed by the tumor. A subtotal removal was accomplished.

For example, the location of the vein of Labbé may prohibit or alter the route of the petrosal approach. High-resolution CT scans are used to evaluate temporal bone anatomy and delineate the extent of bony invasion by the tumor (such as a meningioma). The use of arteriography is reasonable, especially if the surgeon is contemplating tumor embolization for a patient who harbors a glomus jugulare tumor. The need to avoid vital cerebrovascular structures often determines which surgical approach is preferable.

Other reasons influencing the choice of approach include the presence of major veins traversing the tentorium, precluding the transection of tentorium during the petrosal routes. Patency of the major draining venous sinuses engulfed by the tumor can also affect the operative planning for the extent of resection.

For further details, please also refer to the chapter titled Instrumentation in the Principles of Cranial Surgery volume.

The most important tools for dissection include irrigating bipolar forceps that vary in length and tip size. The length of the bipolar tines and the width of their tips must match the scale and caliber of microdissection. Fine-tipped forceps with a minimal tendency to char and spread heat to the surrounding tissues are ideal for dissection around the brainstem and cranial nerves. 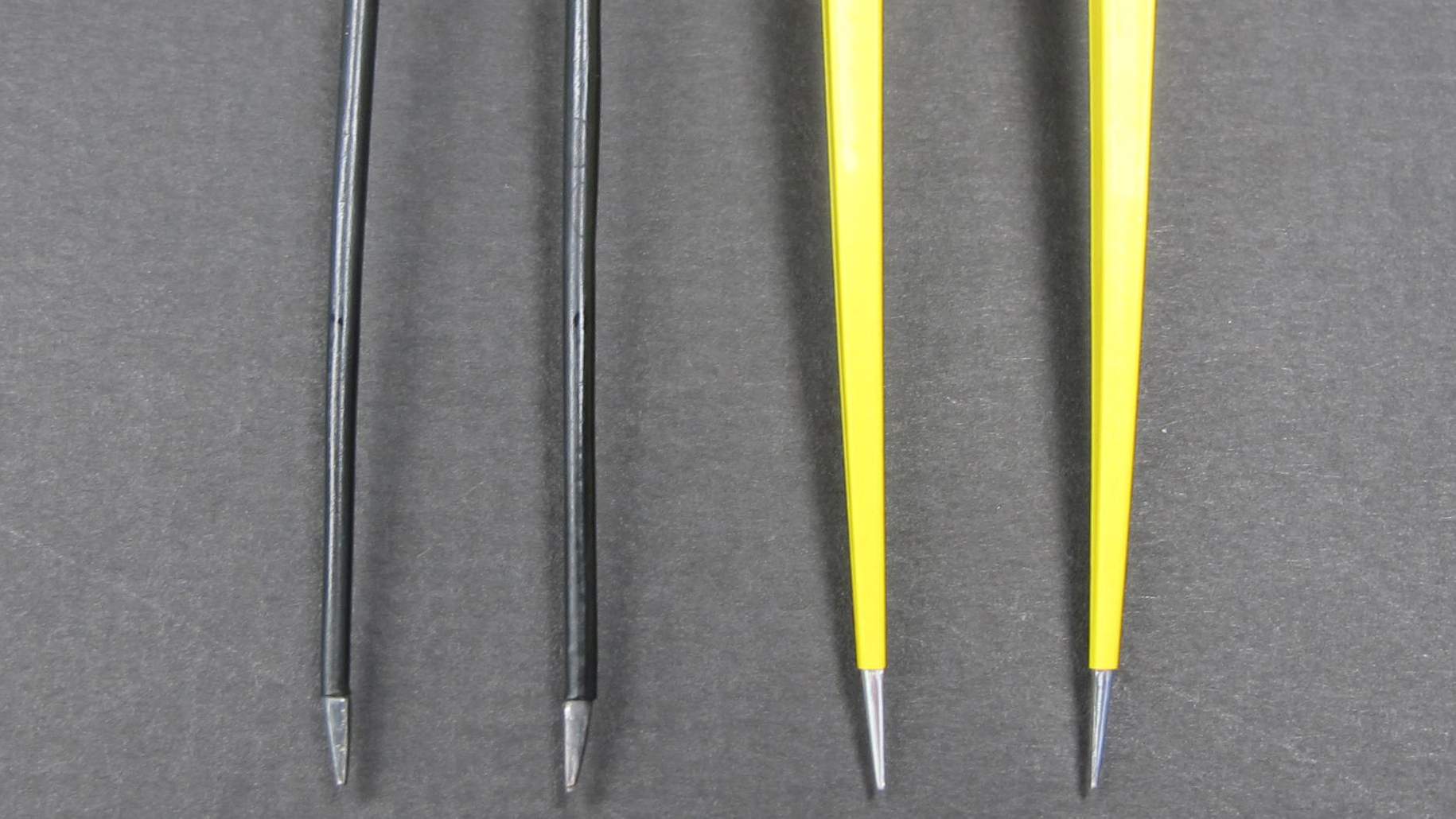 Figure 3: Bipolar forceps with increased heat sink construct and fine tips have a reduced tendency to spread heat to the surrounding cranial nerves and brainstem. I prefer irrigating forceps that have a slightly increased opening tension and therefore can be used to dissect thin arachnoid membranes via their spring spreading action. However, they should not be used aggressively to split thick arachnoid membranes, as this maneuver will lead to pial injury and perforator avulsion.

A variety of dissecting instruments is needed. However, a limited set of well-selected dissectors is more appropriate than a large set of infrequently used instruments. The width and sharpness of the dissector tip should also be matched to the level of microdissection. Angled dissectors provide more flexibility to work around the corners as long as the entire dissection is performed under direct vision. Blunt and blind dissection can lead to perforator injury and pial transgression, causing significant morbidity. 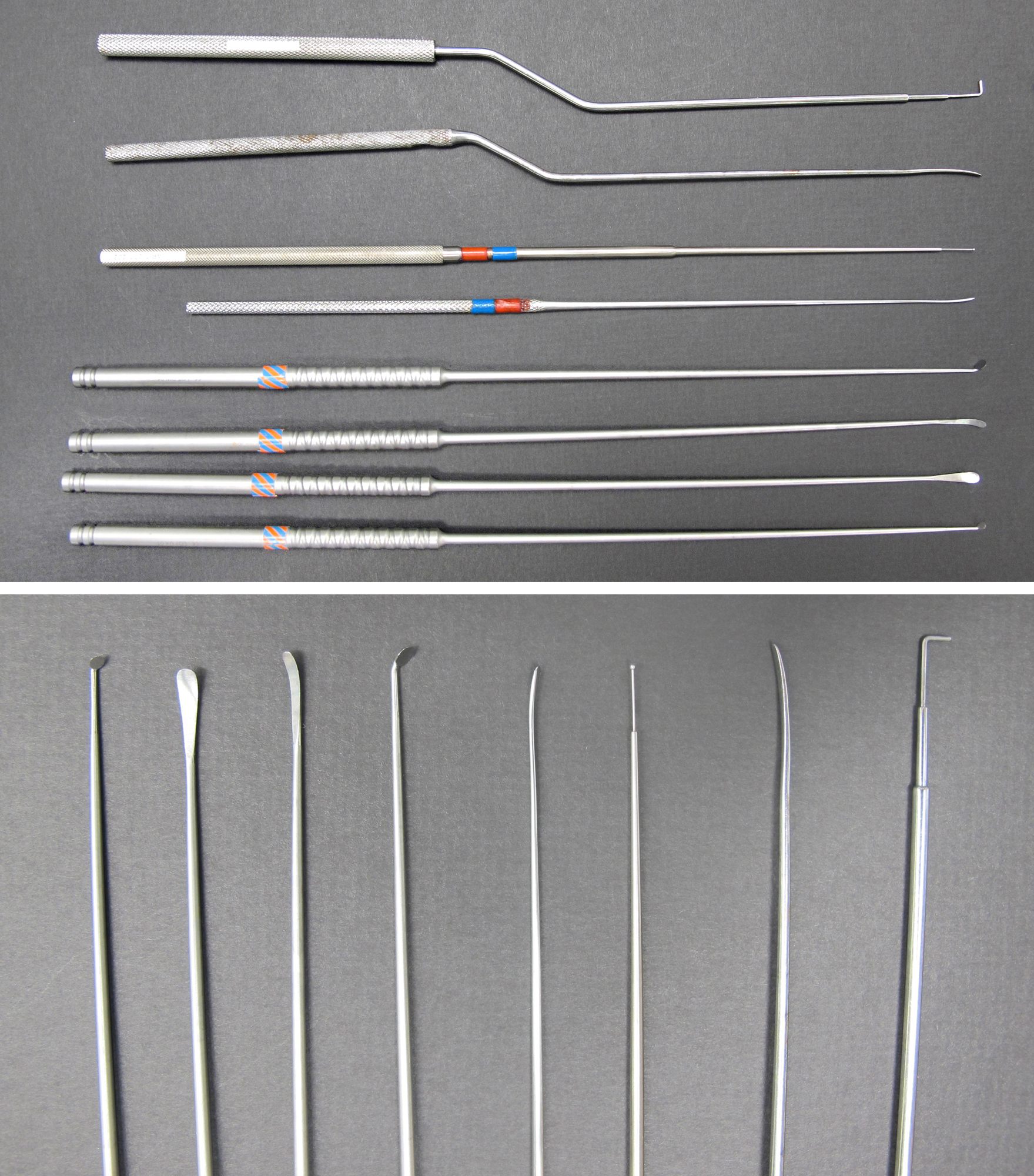 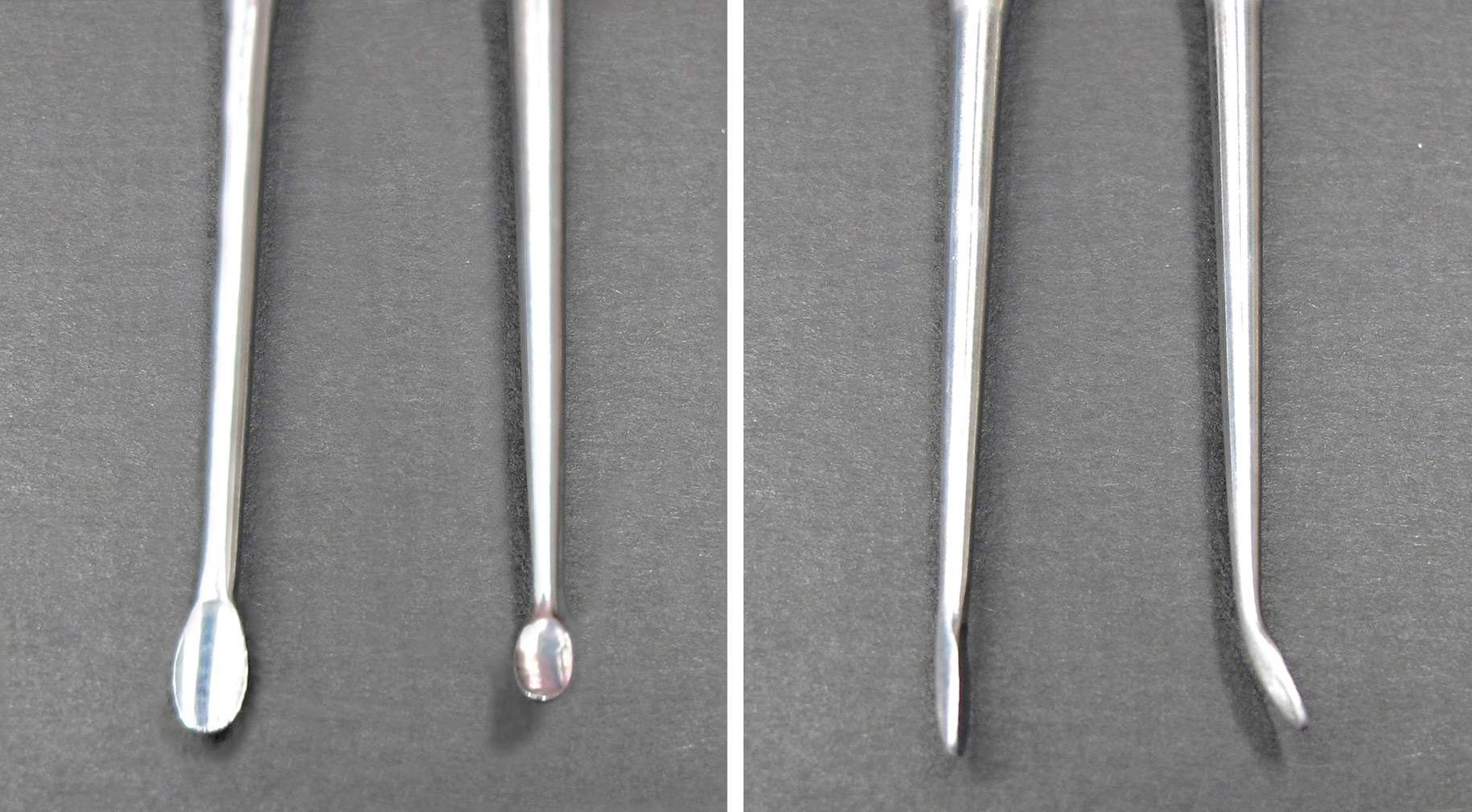 I use the following instruments most frequently to conduct sharp dissection. 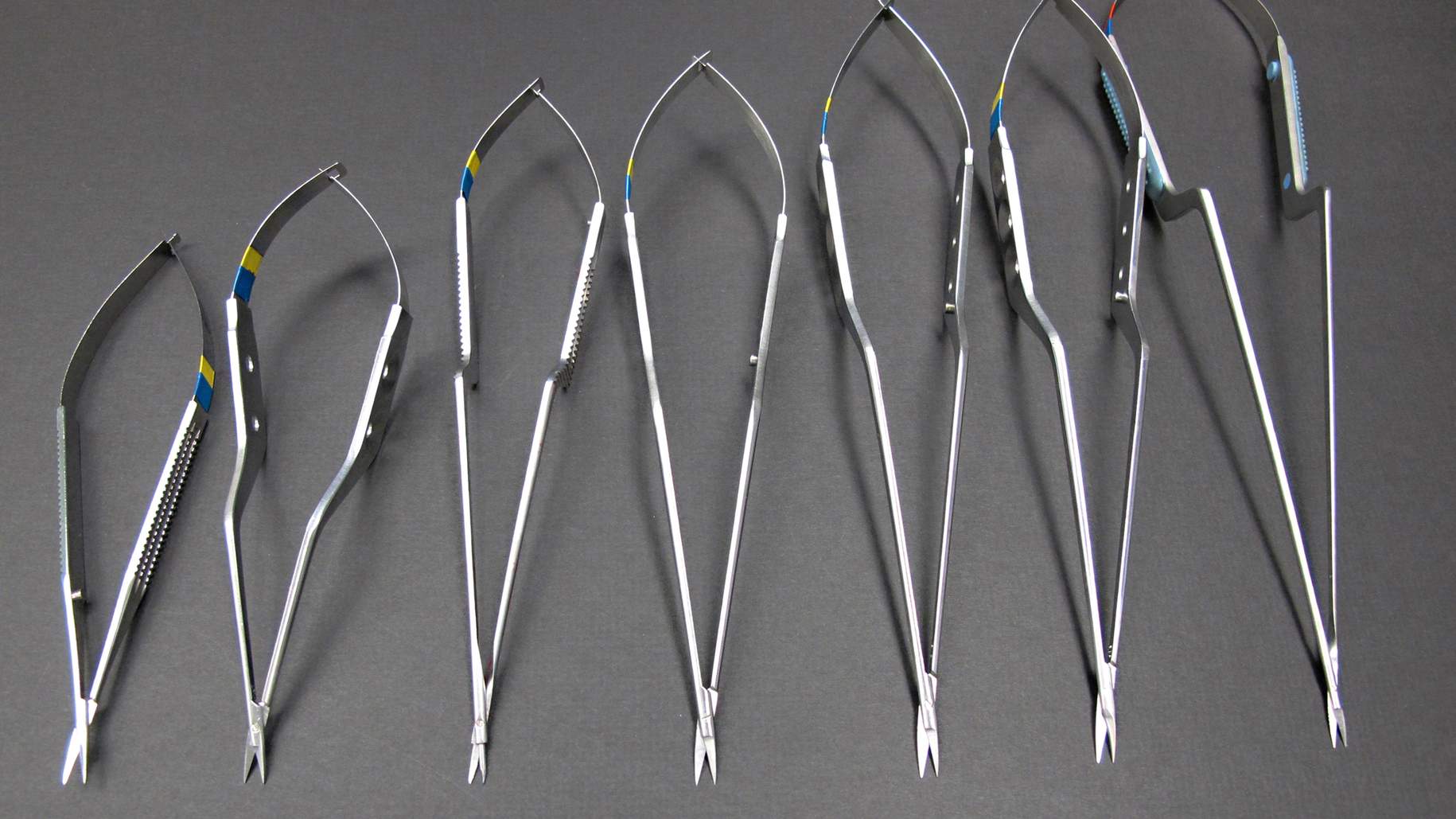 Figure 6: Microscissors of various lengths and blade sizes are important for dissection of the arachnoid membranes and preservation of the tumor-brain interface while avoiding traction injury that could be caused by blunt maneuvers. Curved microscissors allow sharp dissection under direct vision. Blind sharp dissection is obviously dangerous; any temptation to resort to it during the later parts of the operation when the surgeon is tired should be strictly avoided. Sharp blades are crucial for precise disconnection of the arachnoid layers. 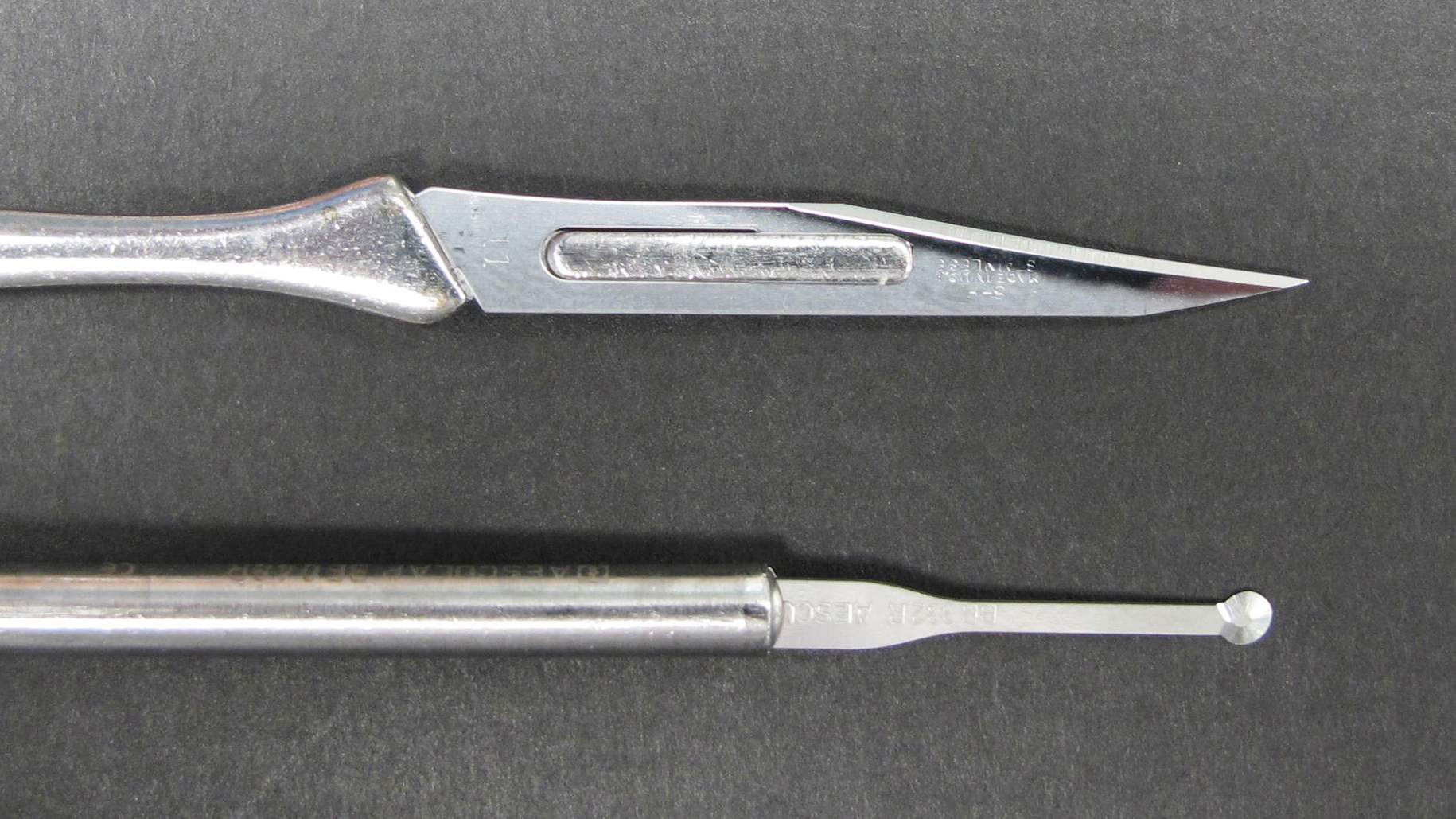 Figure 7: Sharp blades facilitate dissection along the adherent arachnoid planes. The “round knife” (bottom blade) is very helpful during dissection of the Sylvian fissure and disconnection of cranial nerves away from the tumor capsule. 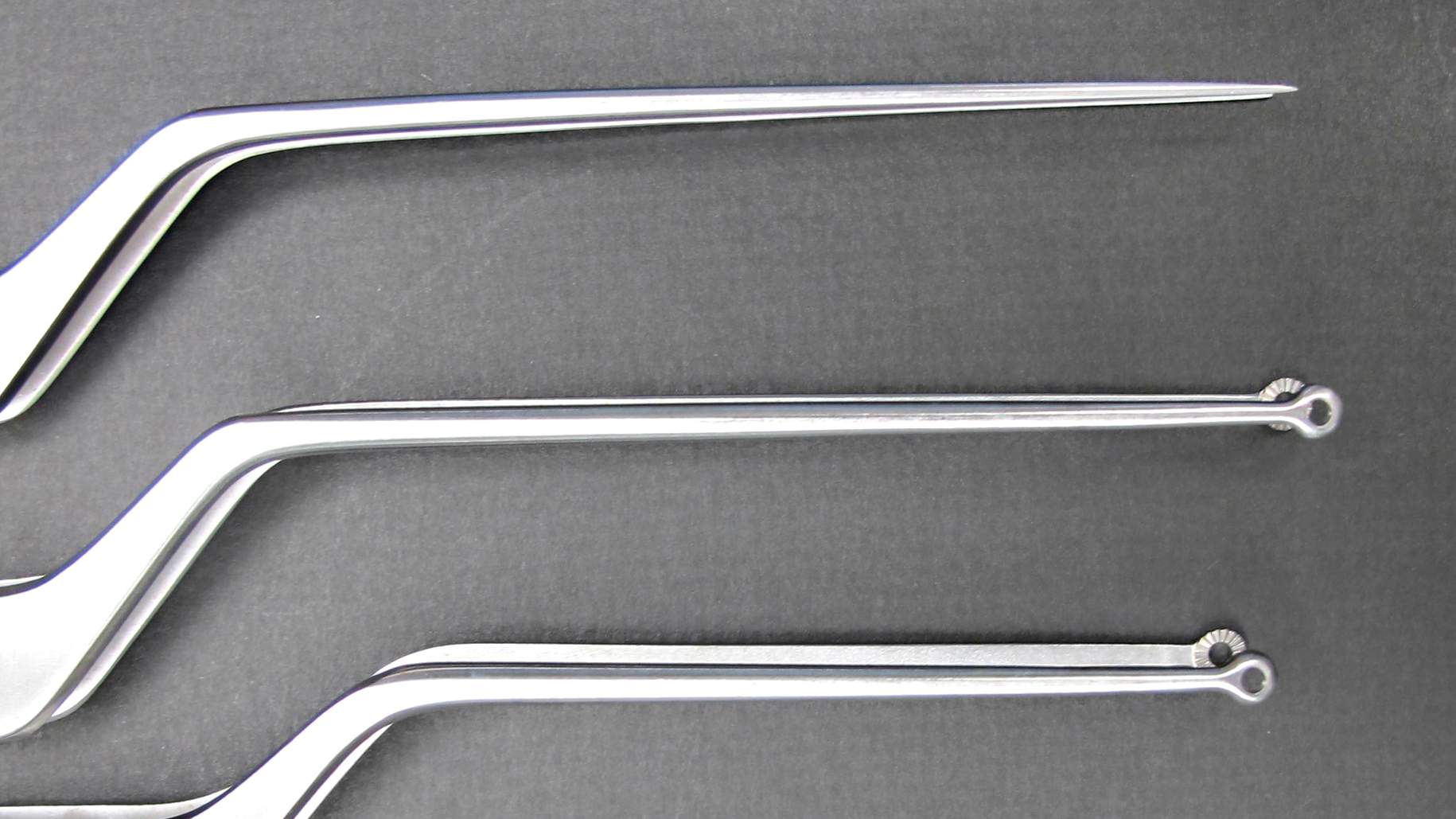 Figure 8: Tumor forceps or the tip of the suction device mobilize the tumor capsule away from the brainstem and cranial nerves and place the intervening arachnoid membranes under tension, while fine forceps gently grab the arachnoid membranes encapsulating the cranial nerves and brainstem and peel them away from the tumor capsule (see next image). Fine forceps (top forceps) and tumor forceps of varying length (bottom two forceps) are demonstrated.

It is critical to aggressively debulk a firm tumor using an ultrasonic aspirator and then gently mobilize the tumor capsule away from the adjacent cerebrovascular structures. Because the operative corridor is narrow and the tumor adheres to adjacent structures, the tumor must be resected in a piecemeal fashion. If the lesion is inadequately debulked, the surgeon will not be able to readily mobilize its capsule, and this leads to a need to excessively manipulate the tumor, causing traction injuries on the surrounding critical structures.

For further details, please also refer to the chapter titled Patient Positioning in the Principles of Cranial Surgery volume.

One facet of patient positioning is to ensure adequate cranial venous return and thereby prevent intraoperative brain tension. Since skull base operations are often lengthy, nonphysiologic patient body postures should be minimized and all pressure points should be well padded.

Orbitozygomatic, fronto-orbital, anterior and posterior petrosal, and transcondylar approaches are known as the most common skull base osteotomies. However, I consider extended pterional, as well as midline suboccipital and retromastoid craniotomies in my list of skull base approaches as well.

The orbitozygomatic, fronto-orbital and pterional approaches employ a very similar patient positioning plan as discussed in the Pterional Craniotomy chapter. In these anterolateral skull base approaches, the patient is positioned supine and the head turned approximately 20–30 degrees away from the side of the lesion. The neck is slightly extended so the highest point on the surgical field is the malar eminence. The latter maneuver mobilizes the frontal lobes away from the skull base.

Figure 10: Head position for the anterolateral skull base approaches are demonstrated. Note the slight head rotation for the eye-brow fronto-orbital craniotomy (left).

For the midline suboccipital supracerebellar or retrosigmoid approaches, I place the patient in the lateral or park-bench position to avoid significant neck rotation or torsion that can lead to the compromise of cranial venous return and postoperative neck pain.

I have also abandoned the practice of placing patients in the prone position in favor of the lateral oblique or park-bench position, because the latter two keep the neck in a more physiologic posture and facilitate venous drainage.

Importantly, when the patient is in the supine or park-bench position, I am able to operate in the seated position during the microsurgical portion of the operation. Furthermore, gravity clears the operative field so cerebrospinal fluid and blood do not pool into the area of microdissection.

For approaches to the middle and posterior cranial fossae, such as the anterior or posterior petrosectomy, a patient whose neck is supple can be positioned supine, with a bulky shoulder roll under the ipsilateral shoulder and the head turned so that the superior sagittal sinus is nearly parallel to the floor. A lateral position is used for patients whose necks are less flexible. An obese patient or one who is at risk for venous hypertension is also placed in the lateral position to decrease the intrathoracic pressure.

Once the head is turned laterally, the vertex is tilted or directed downward so the zygoma is the highest point in the surgical field, allowing the temporal lobe to fall away from the floor of the middle fossa. For further details, please refer to the anterior and posterior petrosectomy chapters. 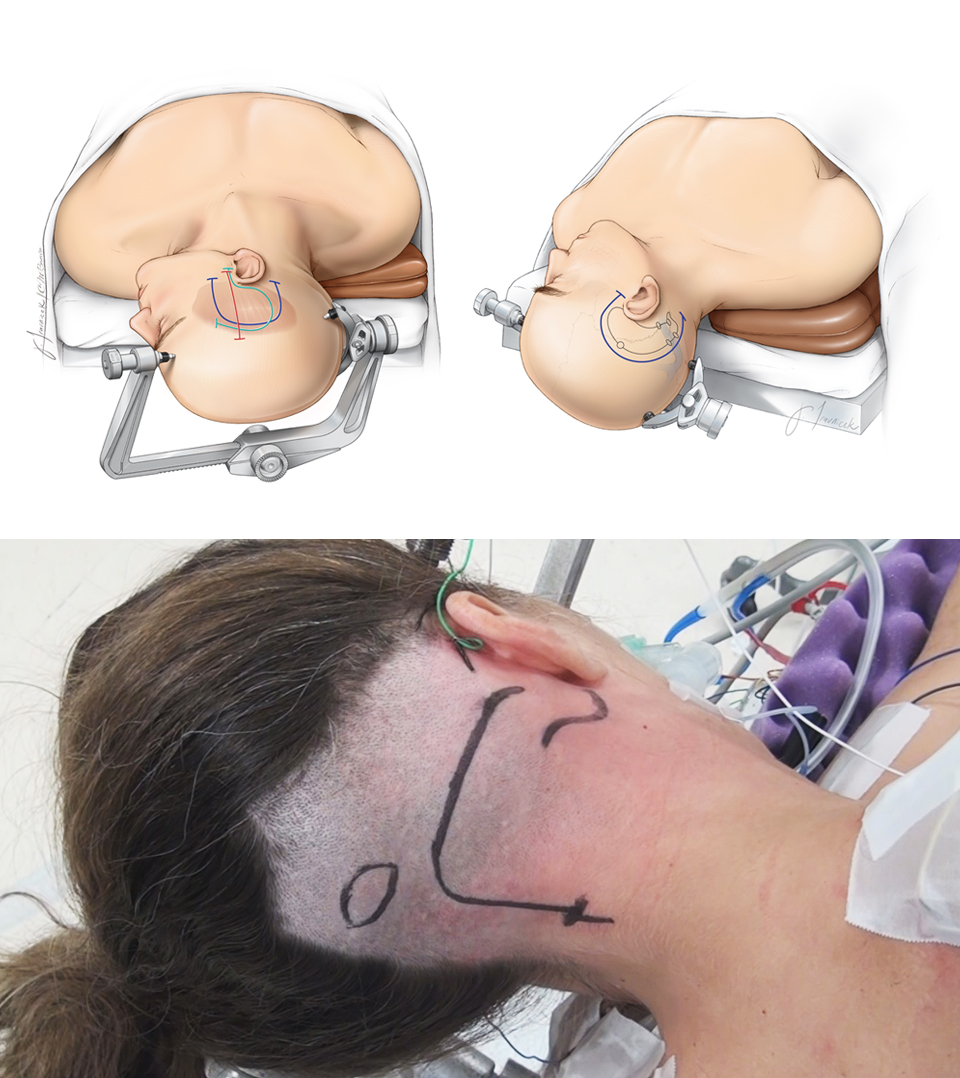 For anterior skull base approaches, such as the supraorbital and bifrontal craniotomies, the patient is positioned supine with the head and torso elevated ~15–20 degrees. The head is placed in a skull clamp or horseshoe headrest (depending on the need for microsurgery) and the neck is slightly extended to allow the frontal lobes to fall away from the floor of the anterior fossa.

Figure 13: Patient positions for a bifrontal craniotomy to reach an anterior skull base tumor.

In summary, when posterior or posterolateral approaches are required, patients can be positioned supine or lateral. I use a lateral oblique position and turn the patient’s head slightly toward the floor. The specific details regarding patient positioning for different approaches are discussed at length in the corresponding chapters of this volume for cranial base surgery.