By definition, aSDH presents within 72 hours of the initial trauma, whereas sSDH presents within 4 to 14 days after head trauma, and cSDH presents 14 days or more after trauma. This time delay present in subacute and chronic SDHs causes the hematoma to become more liquid, allowing for different surgical techniques.

Although aSDH is typically the result of forceful trauma, a patient presenting with cSDH may report a variety of trauma histories. The trauma may be well defined, seemingly innocuous, or even absent. In fact, approximately 40% to 50% of patients with cSDH report no history of trauma. Nontraumatic causes of cSDH include the use of medications, such as anticoagulants and antiplatelet agents, and certain rare underlying conditions, such as vascular malformations, arachnoid cysts, dural sarcomas, and meningiomas. Chronic subdural hematoma is more common in the elderly and in those with a history of alcoholism.

Patients with cSDH typically present with one or more of the following symptoms: headache, gait ataxia, confusion, and aphasia. Larger hematomas may cause significant mass effect, leading to paresis, seizures, or coma.

Although cSDH can be visualized on both magnetic resonance (MR) imaging and computed tomography (CT) scans, CT imaging is considered the gold standard. CT has a superior capability to detect hematomas and estimate their age, in addition to a lower cost, quicker time for scanning, and wider availability. In addition, many elderly patients have implants that may preclude MR imaging.

Noncontrast CT scans are not only useful for identifying the presence of a cSDH, but also in determining the age of the hematoma, which is a significant factor in selection of the specific surgical treatment. Compared with normal brain tissue, an aSDH appears hyperdense, sSDH appears isodense, and cSDH appears hypodense. These differences in density occur due to the evolving composition of the hematoma. It is not unusual that one form of the hematoma predominates but other forms are also concurrently present.

As the hematoma ages it becomes more liquid, causing it to appear less dense on CT scans. This change in viscosity also accounts for the differences in surgical intervention. The use of contrast is generally not needed in order to make a proper diagnosis; however, contrast may be beneficial in visualizing the exact borders of isodense sSDHs. 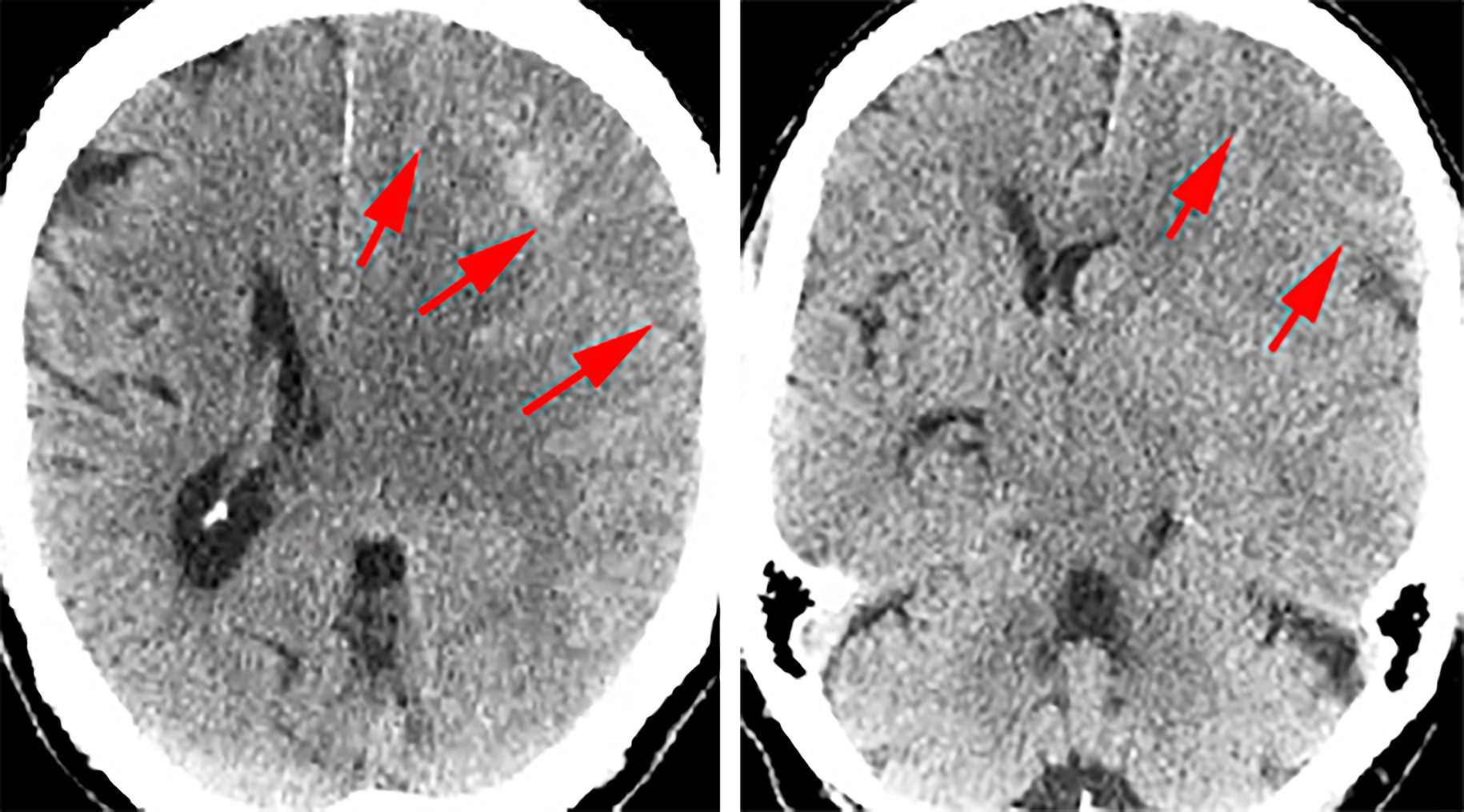 Figure 1: These CT scans show an isodense sSDH of the left frontal lobe. The red arrows highlight the boundaries of the hematoma because it is isodense compared with the brain and therefore potentially difficult to readily identify. Additionally, these CT scans demonstrate mass effect from the SDH causing midline shift. 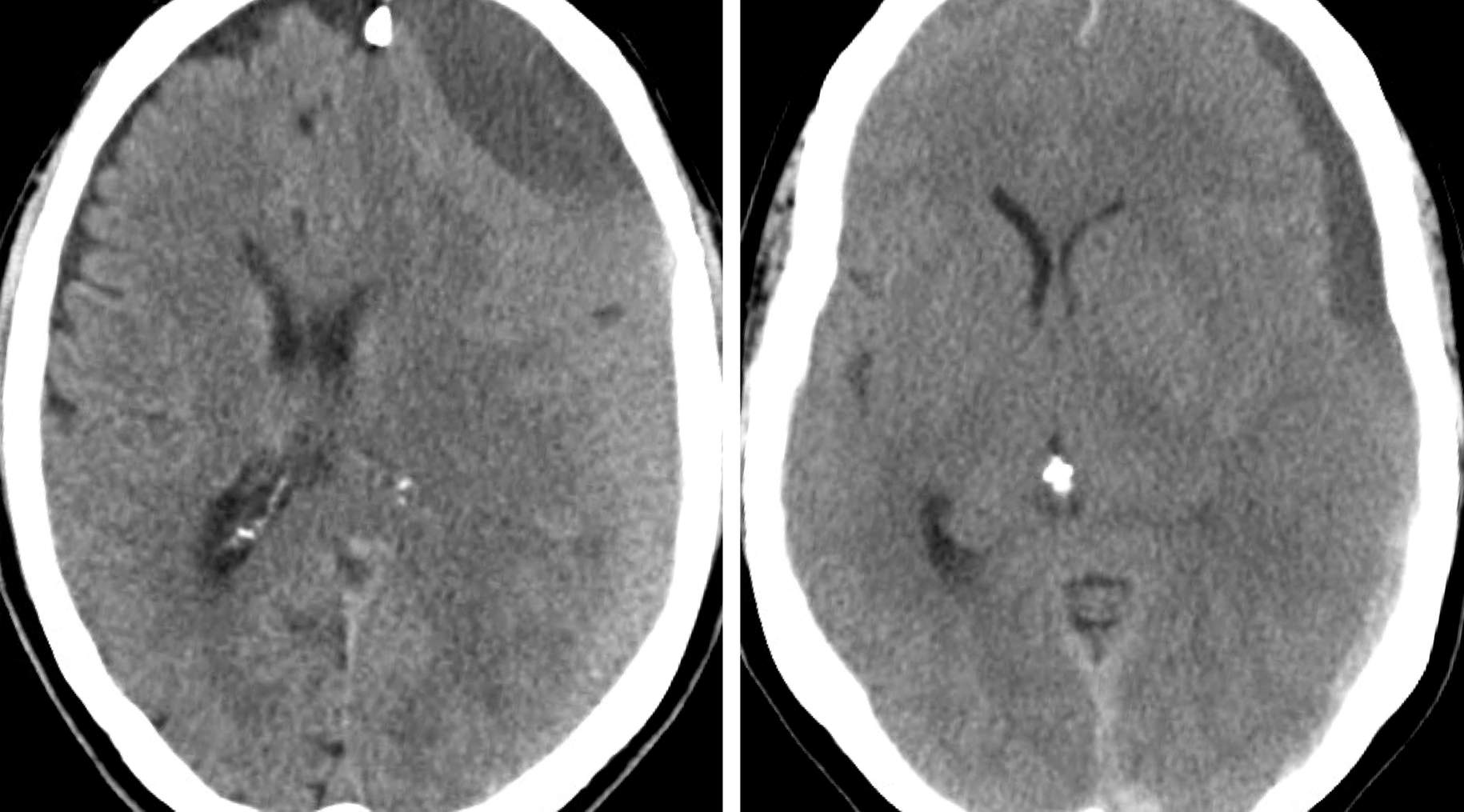 Figure 2: A mixed chronic and subacute SDH is demonstrated. Note the posterior subacute component of the hematoma. 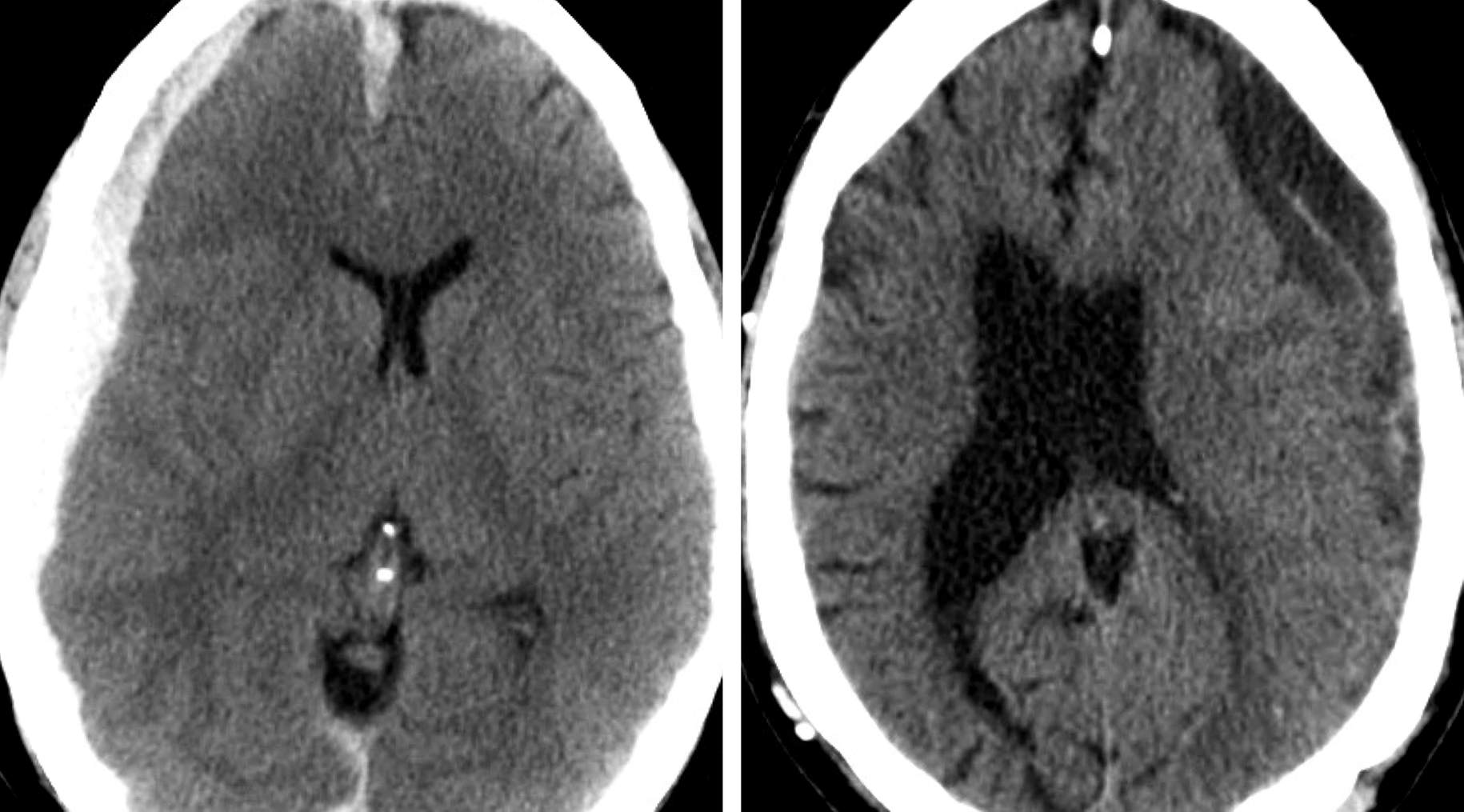 Figure 3: Acute (hyperdense, left) and chronic (hypodense, right) SDHs are included. Note the septations within the cSDH that can potentially complicate complete drainage of the hematoma via burr holes.

Treatment of cSDH with nonsurgical methods is controversial. Asymptomatic small hematomas with no significant mass effect may undergo expectant therapy with discontinuation of anticoagulation medications. Repeat scans performed at intervals document reduction in the size of the hematoma. Surgical evacuation is necessary if resolution of the mass effect is not apparent.

Although some studies have suggested that dexamethasone therapy may be effectively used to treat c/sSDHs without surgical intervention, typically, medical management either proves ineffective or requires extensive hospitalization. For example, patients with moderate-size hematomas without significant midline shift who suffer from mild dysphasia or hemiparesis may undergo a short course of dexamesathone therapy if anesthetic risks are significant.

Patients who present with significant mass effect and midline shift and suffer from severe headaches should undergo urgent evacuation because acute decompensation and transtentorial herniation has been reported among patients complaining of nonspecific acute symptoms.

Discontinuation of anticoagulation therapy is mandatory. Relatively normal coagulation function should be documented. The risk of hematoma recurrence should be discussed with the patient and caregivers. Presence of numerous septations within the hematoma on the preoperative CT scan should lead the operator to consider using a small craniotomy rather than burr holes. However, most of the time, one is able to fenestrate the septations via the burr holes.

If the hematoma contains a small amount of acute blood products, burr holes are not contraindicated, but strategic placement of the holes over the acute components is recommended.

Although there are several surgical methods used for evacuation of cSDHs, such as burr hole(s) drainage, twist drill craniostomy, and small craniotomy, I find burr-hole drainage via two burr holes to be the most effective technique. The use of two burr holes rather than only one is imperative because evacuation via a single burr hole may lead to subtotal removal of the hematoma, especially in sSDH. I routinely implant a subdural drain (to be continued for 1 to 2 days after surgery), but may forego this step if the brain expands intraoperatively to obliterate the subdural space.

General anesthesia or conscious sedation may be used, depending on the surgeon’s preference and the patient’s tolerance. The patient is placed in the supine position and the head is placed on a horseshoe-shaped headrest. If the cSDH is unilateral, the patient’s head should be tilted approximately 30 degrees toward the contralateral side. If the cSDH is bilateral, the head is kept in the neutral position. 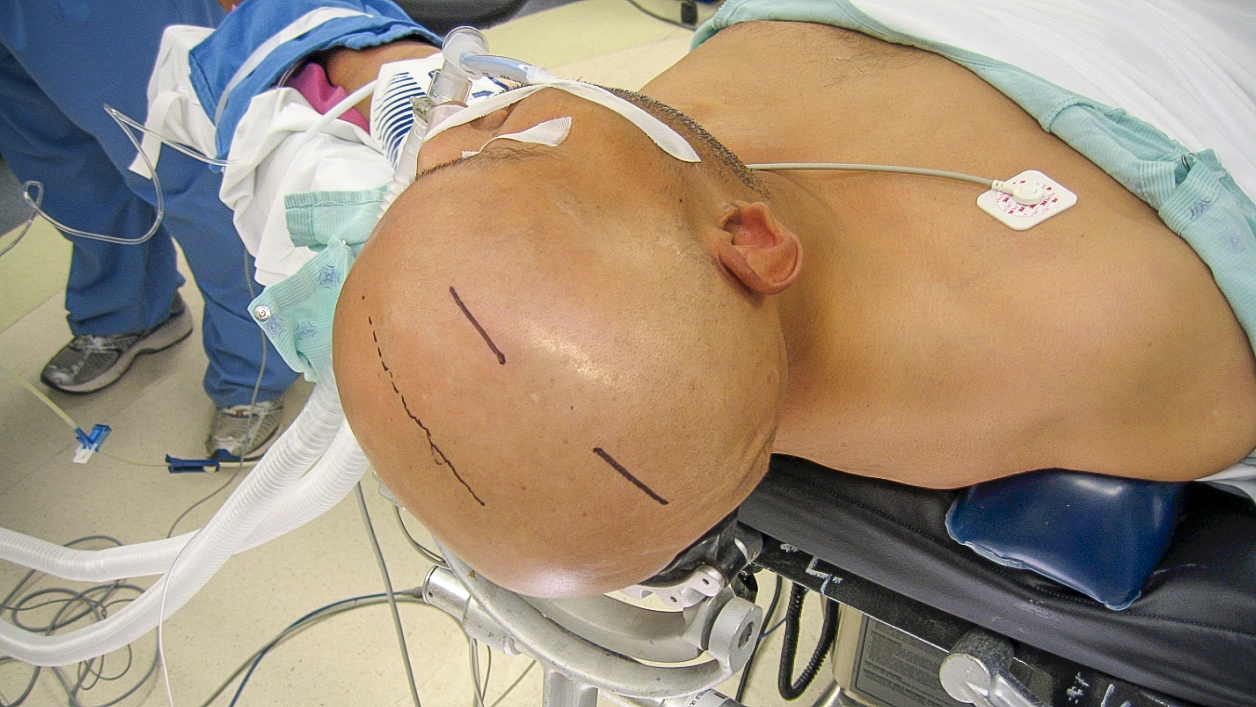 Figure 4: Proper patient positioning for evacuation of a unilateral right-sided subacute or chronic subdural hematoma is shown. Both the midline and the two incision sites are marked. The location of the maximum thickness of the hematoma may slightly alter the incision sites.

After both incisions are completed, I use two small mastoid retractors to expose the skull. Two large burr holes are created using the perforator drill, and the dura is opened in the cruciate fashion. These maneuvers allow the hematoma to be drained. Furthermore, ample amounts of irrigation within the subdural space will displace the more solid components of the hematoma. The two-burr technique allows effective irrigation through the anterior hole with evacuation of the clot through the posterior hole and vice versa. The irrigation process is continued until the irrigant becomes clear upon return via both burr holes. 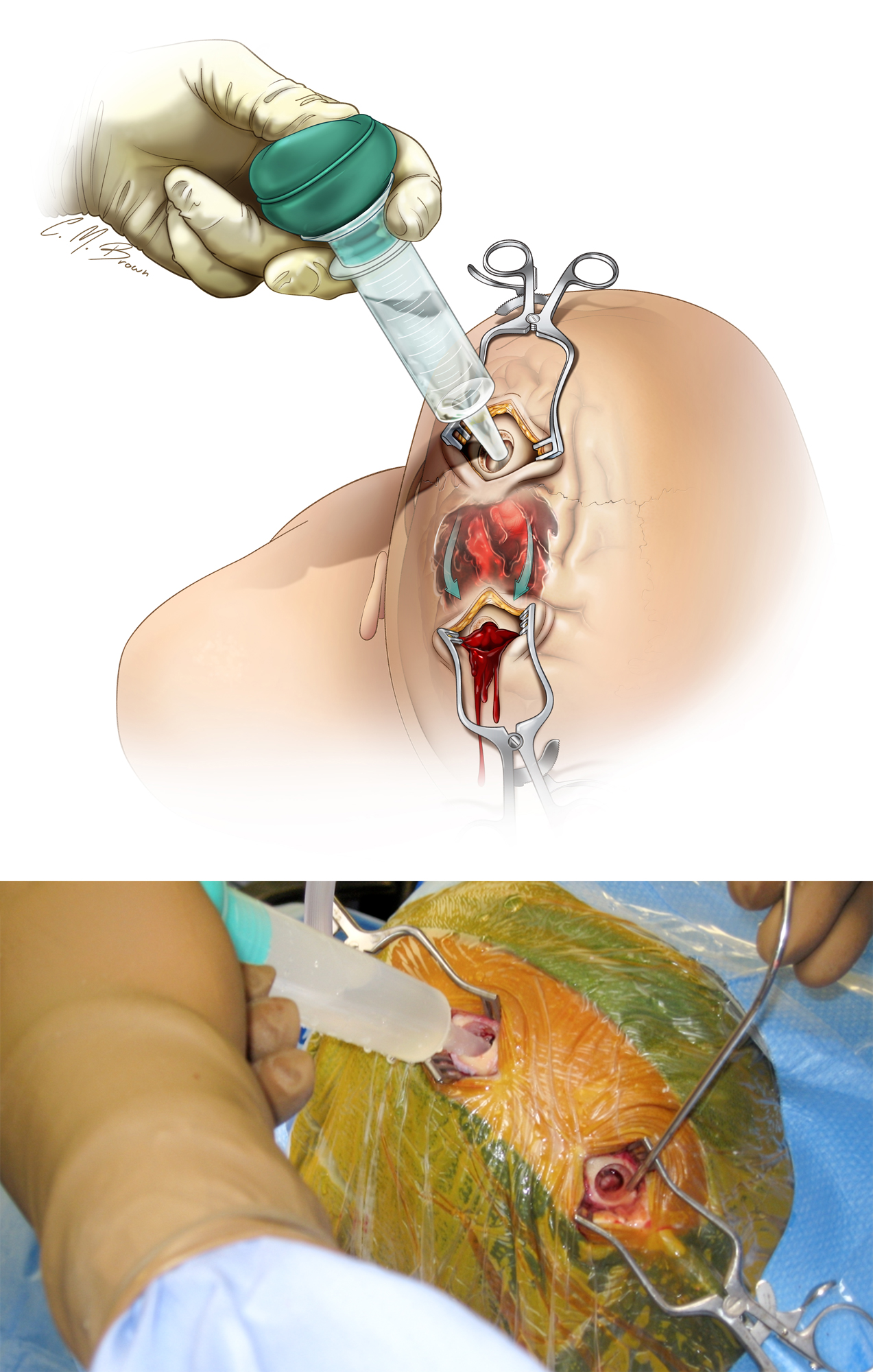 Figure 5: The above illustration and intraoperative photo demonstrate evacuation of a subacute subdural hematoma through the two-burr-hole technique using an ample amount of irrigation. The bulb irrigator is used through the anterior burr hole to displace the more solid components of the clot into the posterior burr hole. The top illustration demonstrates the movement of the hematoma subdurally, while the bottom image shows the surgeon’s perspective. I inspect the surface of the brain through the burr holes and carefully attempt to fenestrate the easily reachable septations to allow free flow of the irrigant between the anterior and posterior burr holes. If the surface of the brain is not visible, the septations should be further fenestrated through the limited exposure if this maneuver is deemed safe. The movement of the brain toward the calvarium is a good prognostic factor, another confirmation that the hematoma has been adequately evacuated.

Any evidence of mild venous ooze within the subdural space is managed via gentle irrigation through the burr holes and operator’s patience. I do not routinely use a red rubber catheter in the subdural space to dislodge unreachable clots and facilitate hematoma evacuation.

Once the irrigant returns relatively clear, I place a size-9 round Jackson-Pratt drain in the anterior burr hole inserted toward the posterior burr hole in the subdural space, making sure to avoid injury to the pia. The drain is then tunneled subcutaneously, and the external portion is stapled/sutured to the scalp to minimize the risk of delayed displacement. 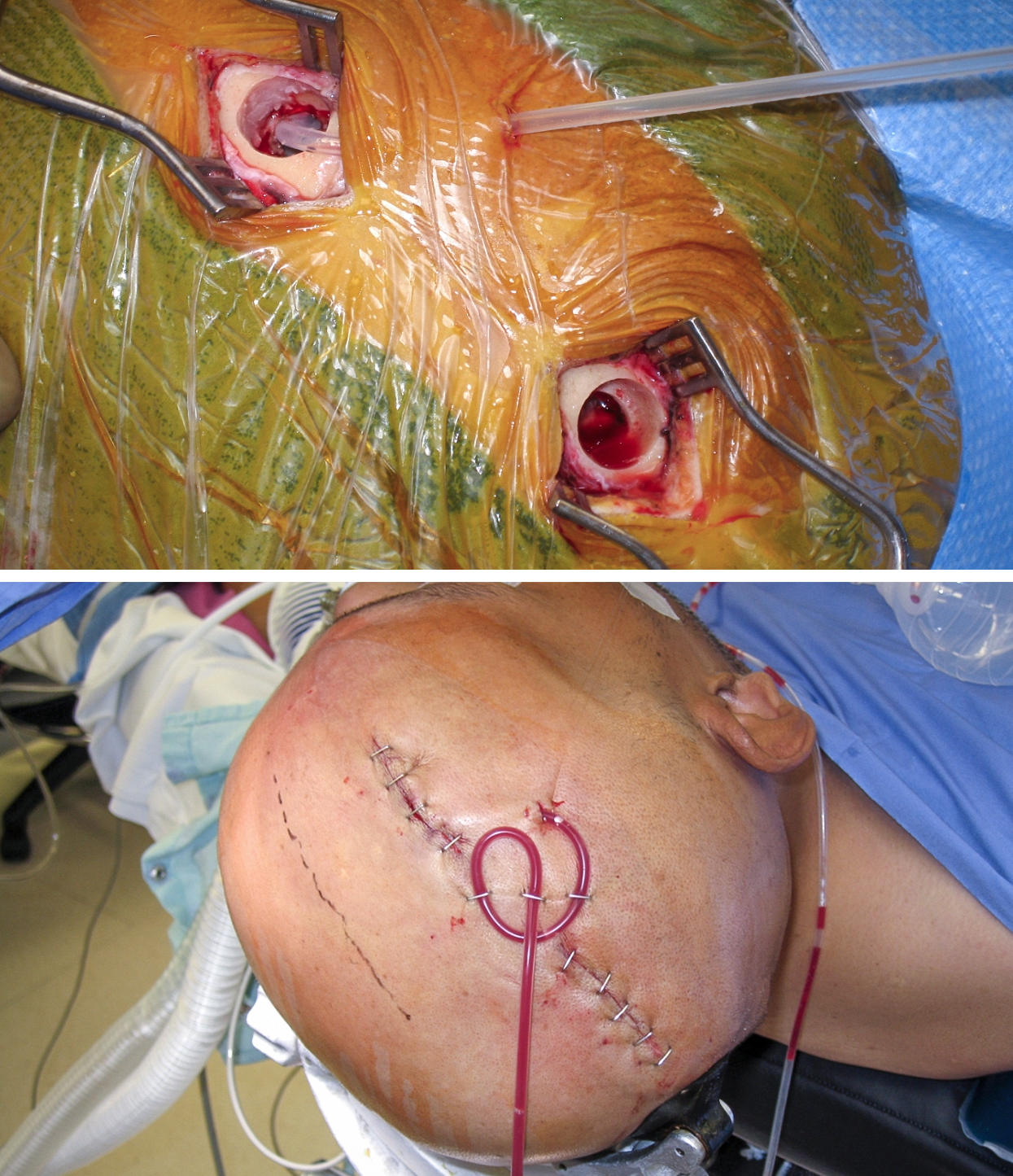 A postoperative CT scan can confirm the successful evacuation of a cSDH and is typically performed the day after the operation. If the hematoma is adequately evacuated, the drain is discontinued; this maneuver avoids overdrainage of the cerebrospinal fluid and the risk of one or more remote intracerebral hemorrhages.

Note that residual fluid in the subdural space is not uncommon, but this fluid has a different density shown on imaging compared with the hematoma shown on preoperative imaging. Repeat scans several days after surgery should also be considered if new symptoms develop.

Postoperatively, the patient should receive antibiotics for the next 24 hours, as well as anticonvulsants for a week following surgery. If the patient was on anticoagulant medications before surgery, these should be held and not resumed until imaging suggests that all or most subdural collections have resolved.

Although surgical evacuation of cSDH is a common and relatively simple neurosurgical procedure, proper postoperative care is essential to reduce the chance of recurrence. Chronic subdural hematomas recur in approximately 8% to 16% of patients 1 week or more after the initial evacuation. Since the majority of patients who develop cSDH are elderly, it is imperative that the patient’s preexisting conditions and, more specifically, anticoagulant medications are carefully evaluated and resumed appropriately in order to minimize the risk of recurrence.

Highly loculated chronic/subacute hematomas and those that are refractory to evacuation via burr holes are reasonable candidates for a small frontotemporal craniotomy and “open” removal of the hematoma with marsupialization of hematoma membranes.

The loculations and septations are removed if they are not adherent to the surrounding neurovascular structures. Most of these septations are transected at the periphery of the bony opening as they extend well beyond the craniotomy edges.

Large subdural hematomas with significant mass effect can lead to an unexpected acute irreversible neurological decompensation despite the relatively nonremarkable neurological deficits at the time of initial admission. Emergent decompression at the time of deterioration may not lead to postoperative neurological recovery. Therefore, timely and emergent management of the relatively asymptomatic lesions with significant mass effect is highly advised.

Figure 7: This unfortunate and relatively young male presented with only mild confusion (top row images-note the early sign of brain herniation-right upper image) to an outside institution. Surgery was postponed to the next day due to the patient's regular use of the aspirin and the presumed need for platelete infusion. This patient acutely deteriorated next morning and underwent emergent burr hole decompression. Despite adequate hematoma evacuation, it is apparent that preoperative cerebral herniation immediately before surgery most likely led to diffuse cerebral ischemia (bottom row images). The patient subsequently expired.