Middle cerebral artery (MCA) bifurcation aneurysms account for approximately 35% of all giant aneurysms. Because of their location, lateral projection, and attachment of the dome to the lobe, nearly 50% of all ruptured MCA aneurysms present with intraparenchymal hematomas. Most (80%) of these hematomas are located in the temporal lobe.

Although MCA aneurysms are most commonly seen at the MCA bifurcation, they may also be found proximally along the M1 segment or distally along the M3 or M4 segments. Each location raises different surgical and management considerations; however, the anatomic and morphologic features of MCA aneurysms render them amenable to microsurgical clip ligation as their primary treatment of choice for most patients.

Because of the distal location of giant MCA aneurysms and their wide-neck morphology, microsurgical clip ligation is more successful and has a lower risk than endovascular therapy for most patients. Mass effect that demands surgical decompression is not uncommon. Endovascular therapy may be superior for distal aneurysms or giant aneurysms in older patients with medical constraints who will benefit from partial sac embolization.

A careful analysis of the preoperative studies, including computed tomography angiogram, is warranted. The presence of MCA trifurcation should be noted. A preoperative angiography is imperative to clearly define the morphology of the neck, the location of the hidden trunks behind the giant sac, and the suitability of the superficial temporal artery for revascularization. The degree of collateral flow should be estimated. Stenosis of the M2 trunks’ outlets at the bifurcation is not uncommon; if primary clip ligation is considered, the surgeon must leave a generous lumen (atrium) behind near the bifurcation to avoid M2 stenoses.

The presence of calcium plaques across the aneurysm neck or dome indicates the need to prepare for revascularization. Slight calcification only at the dome on imaging is often associated with occult microcalcifications at the neck. The location of the live aneurysm lumen with respect to the intrasaccular thrombus is important. To minimize the temporary occlusion time, I open the sac and remove the clot away from the open lumen until I encounter bleeding, and only then do I apply temporary clips to trap the aneurysm. This strategy requires precise planning of the incision over the dome.

The presence of atherosclerotic vessels signifies poor collateral support and a high risk of ischemia, even with only moderate temporary occlusion time within an acceptable range (10-15 min) under burst suppression. In these instances, a pre-emptive bypass should be considered. 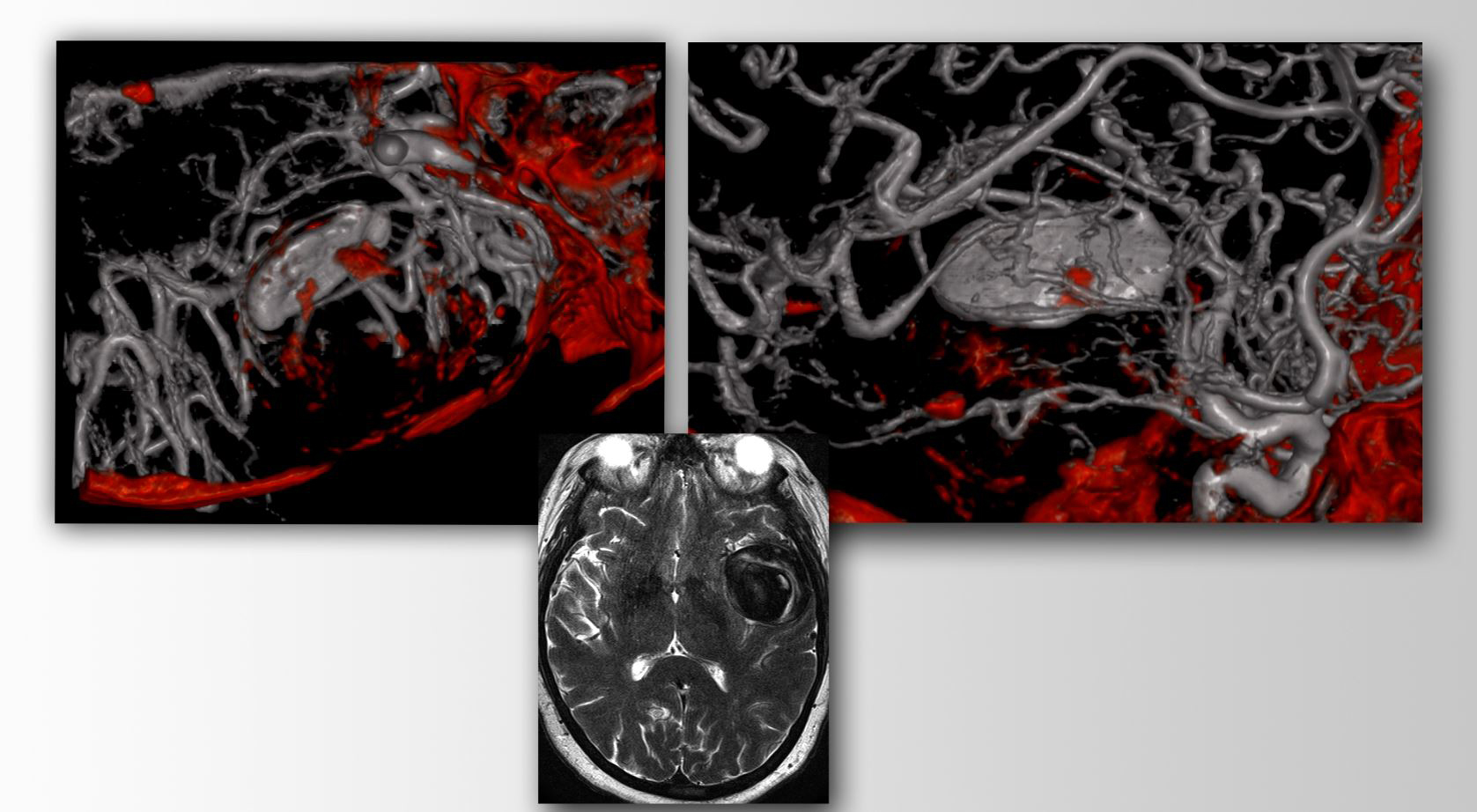 Figure 1: A partially thrombotic giant MCA (proximal M2) aneurysm with calcification plaques in its walls is demonstrated. Preemptive revascularization of the distal branch of this trunk and its proximal occlusion beyond the bifurcation led to aneurysm thrombosis.

A pterional craniotomy is the ideal approach for exposing a giant MCA aneurysm. The superficial temporal artery (STA) is prepared in expectation of revascularization.

For the indications and techniques of low-flow (STA-MCA) and a high-flow (radial artery interposition graft for external carotid artery to MCA) bypass, please visit their corresponding chapters.

In this chapter, I review the technical tenets for primary reconstruction of giant MCA aneurysms. For specific details about the craniotomy and intradural exposure of MCA aneurysms, refer to the Middle Cerebral Artery Aneurysm chapter. 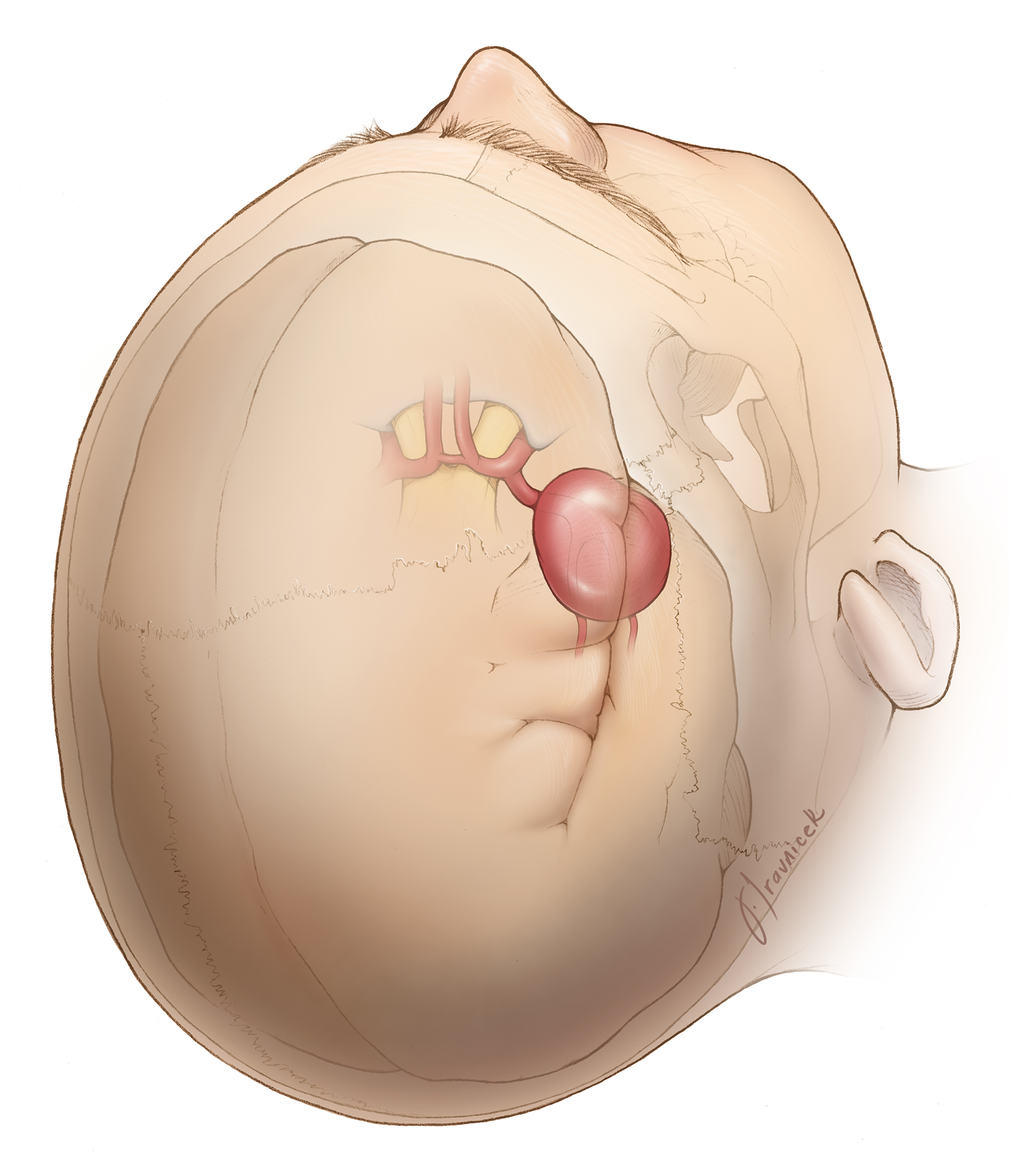 Figure 2: The overall location of a giant MCA aneurysm is demonstrated. I start my dissection through the Sylvian point and follow the M2 branches to the level of M1. Once I find M1 and secure proximal control, I redirect my dissection from M1 toward the bifurcation to expose the aneurysm neck. Wide Sylvian fissure dissection is warranted. This strategy may not always be feasible because giant aneurysms frequently obstruct the operative corridor toward these arteries. If necessary, proximal control may need to be established at the supraclinoid internal carotid artery and the M2 trunks may be exposed only after opening of the sac and its thrombectomy (Redrawn from Tew, van Loveren, Keller*).

Please refer to the chapter on Techniques of Sylvian Fissure Split for a discussion regarding the initial steps of fissure dissection. 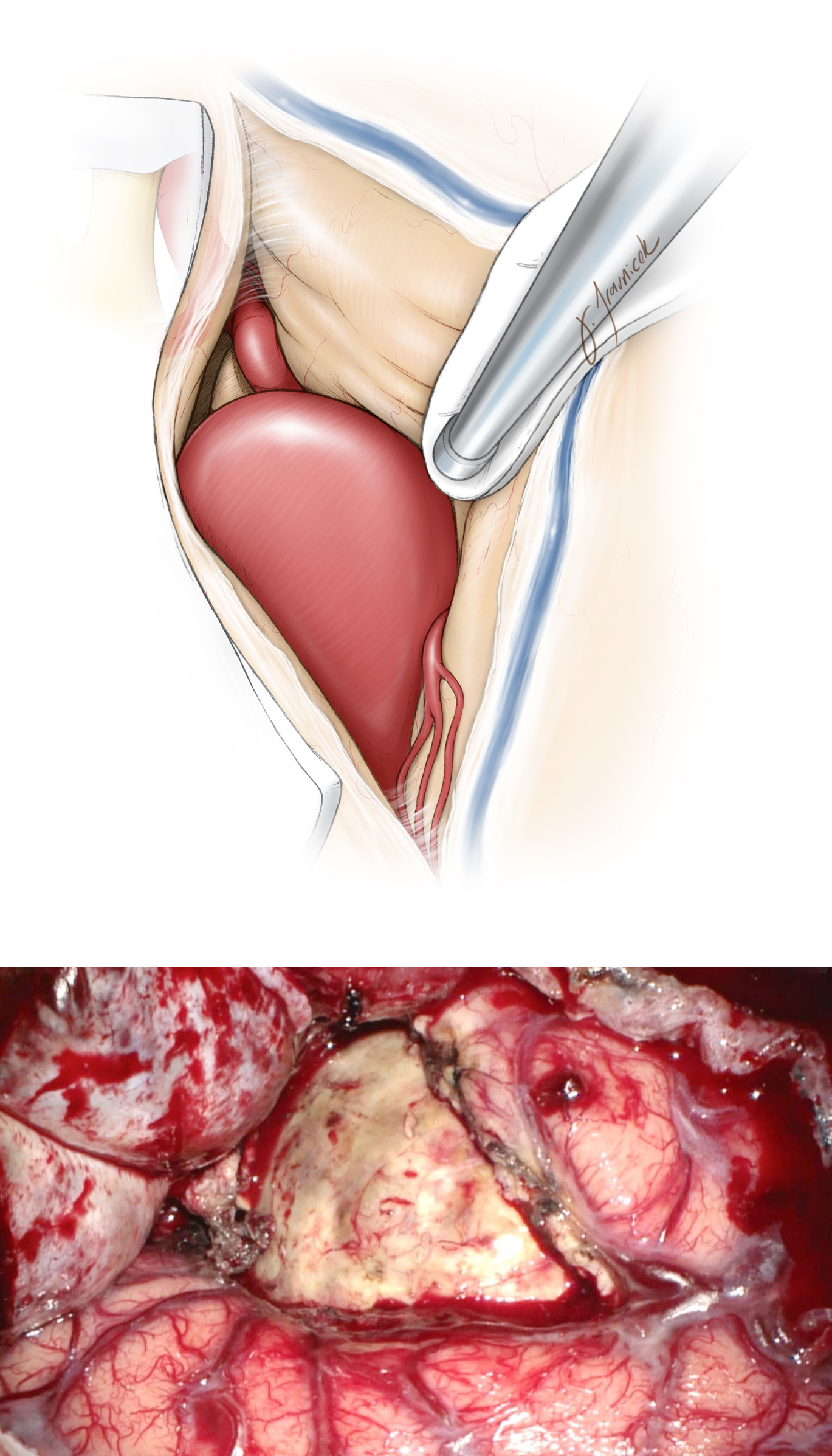 Figure 3: I avoid using fixed retractor blades during the entire dissection process because the blades often obstruct my working angles and lead to cortical injury. However, I may use a fixed retractor blade as my “third hand” during the final fine adjustments of the permanent clip while I use the suction device to manipulate the neck and dome. In this illustration, proximal control is easily secured because of the distal location of the aneurysm and the convex curve of the M1. Most giant aneurysms expand the fissure and facilitate mobilization of the operacula (lower photo)(Redrawn from Tew, van Loveren, Keller*). 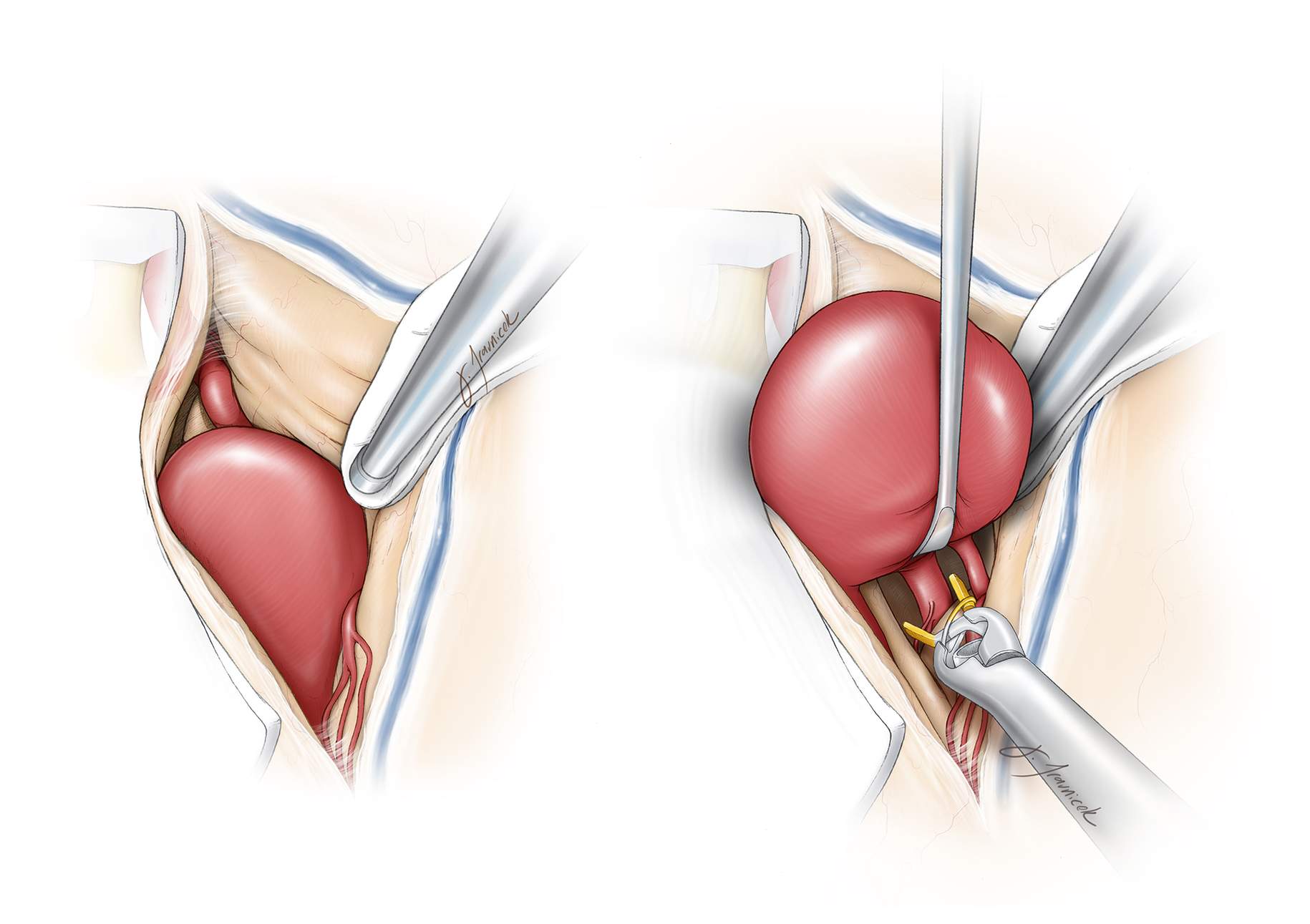 Figure 4: For anterior-pointing giant aneurysms, proximal control may not be easily attained. Some anterior mobilization of the dome may be needed to secure proximal control underneath and behind the sac. I frequently need to open and decompress the apical clot within the aneurysm so that I can expose the distal M1 (Redrawn from Tew, van Loveren, Keller*).

With the M1 and both M2s exposed, the next step is dissection of the proximal and distal aneurysm neck. Temporary clipping is tremendously beneficial for softening the aneurysm during difficult and risky dissection maneuvers, and it is particularly helpful for isolating branching and perforating arteries adherent to the dome.

The temporary clip must be placed just distal to the lenticulostriate vessels and should not interfere with the clip construct. Large and giant aneurysms require aneurysmal trapping to deflate and/or thrombectomize the sac. Once temporary clipping has been performed, the aneurysm neck must be fully circumdissected free of adhesions and the dome dissected free from the surrounding parenchyma.

In the sac is not yet opened, I prefer to pursue dissection under temporary proximal M1 occlusion for 5-minute intervals interspersed with 2-minute reperfusion periods. Calcified plaques in the M1 interfere with temporary clipping. In these instances, temporary ligation of the supraclinoid internal carotid artery may be considered if portions of this vessel are not affected by plaque. In elderly patients and those with very atherosclerotic arteries, temporary clipping should be avoided or used very sparingly. 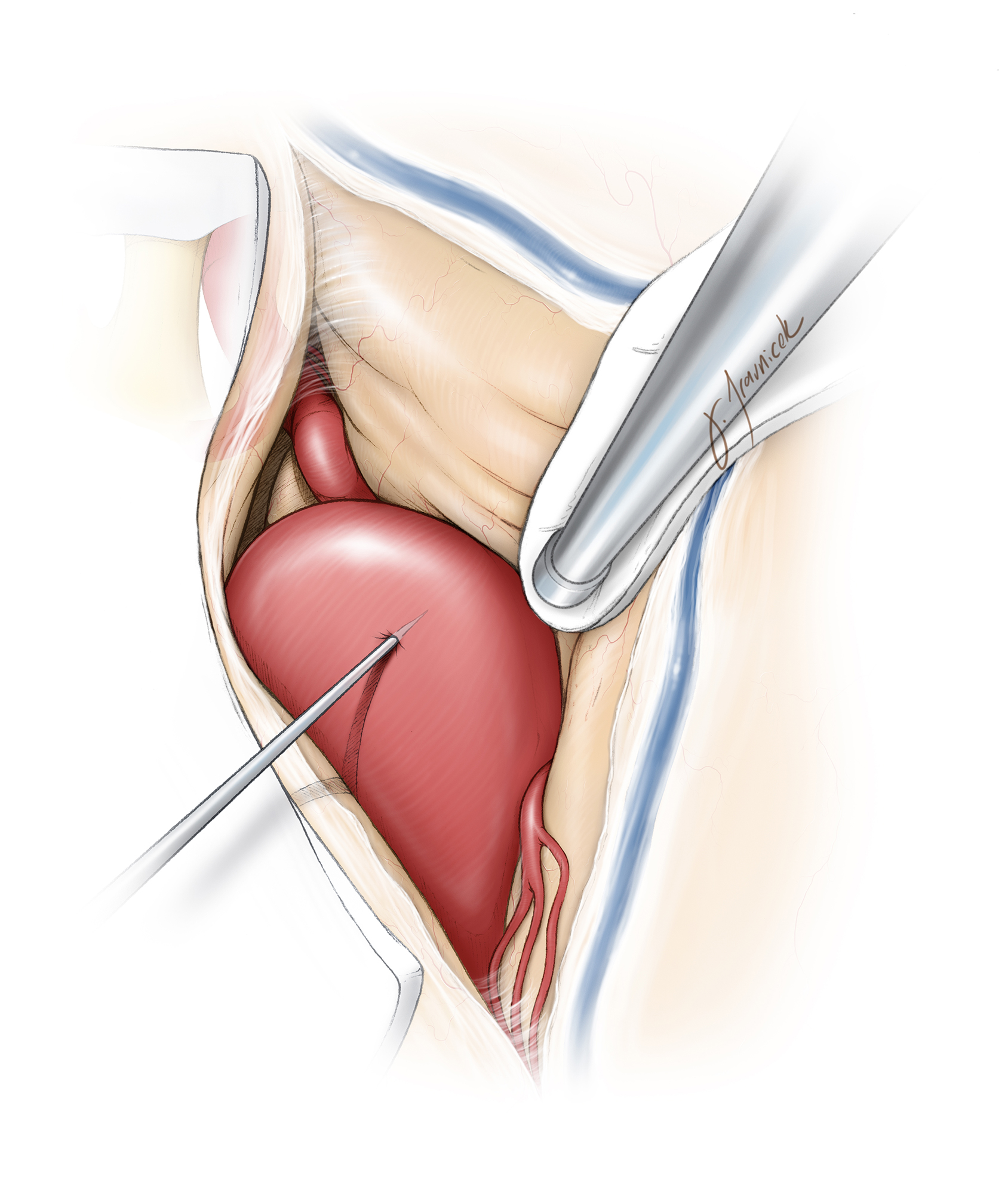 Figure 5: The strategies for handling thrombotic MCA aneurysms are discussed in the following illustrations. First, a needle is placed in the dome to rule out the patent or live section of the dome before the sac is incised (Redrawn from Tew, van Loveren, Keller*). 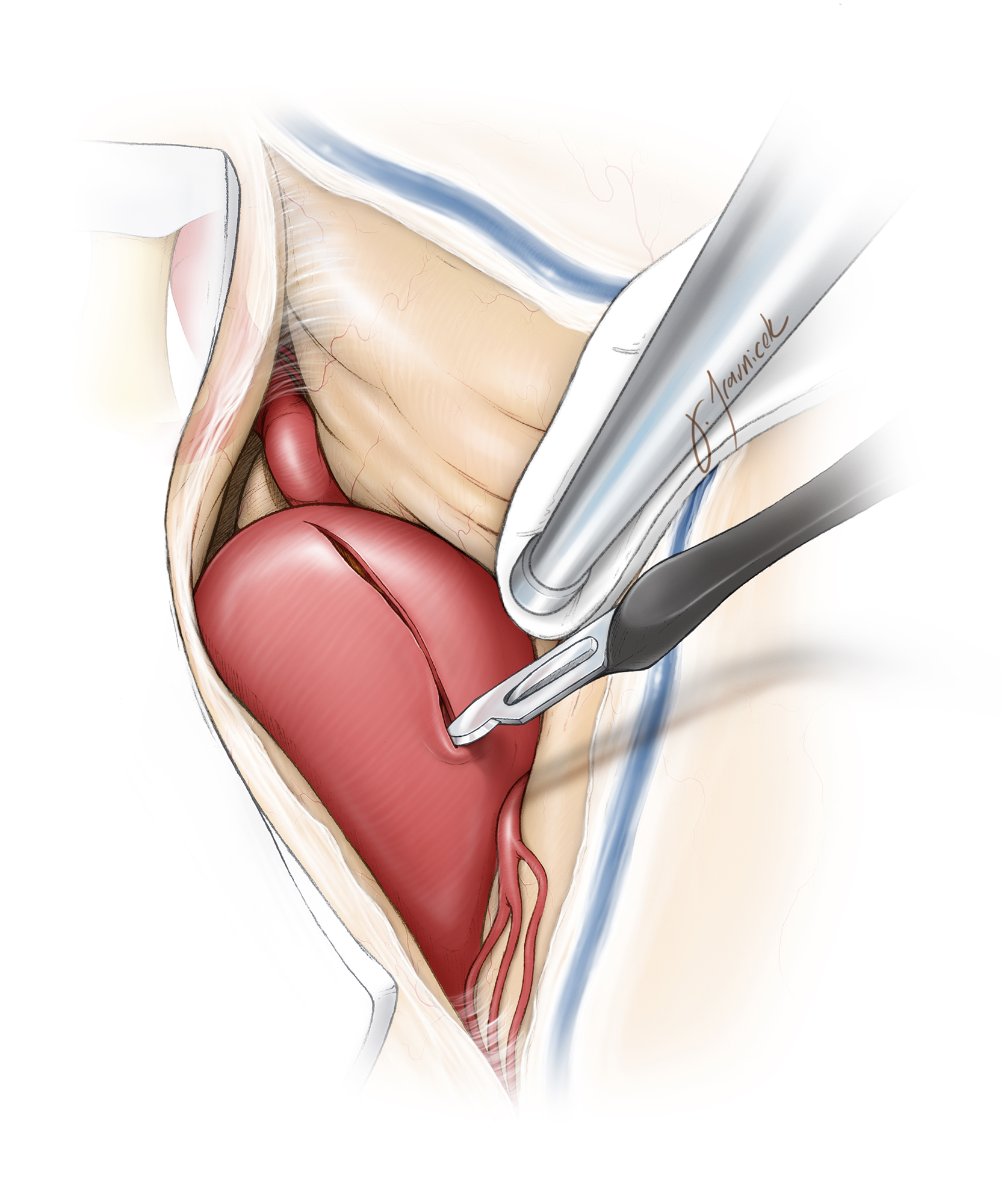 Figure 6: Next, a #15 blade knife is used to incise the section of the dome that is filled with thrombus. Note the absence of temporary clips. Most patients with a giant aneurysm harbor global atherosclerosis and do not tolerate temporary occlusion well because of their lack of collateral vascular support (Redrawn from Tew, van Loveren, Keller*).

Figure 7: Once the dome is opened, a pair of pituitary rongeurs or an ultrasonic aspirator is used to remove the intrasaccular thrombus away from the live part of the sac (Redrawn from Tew, van Loveren, Keller*). 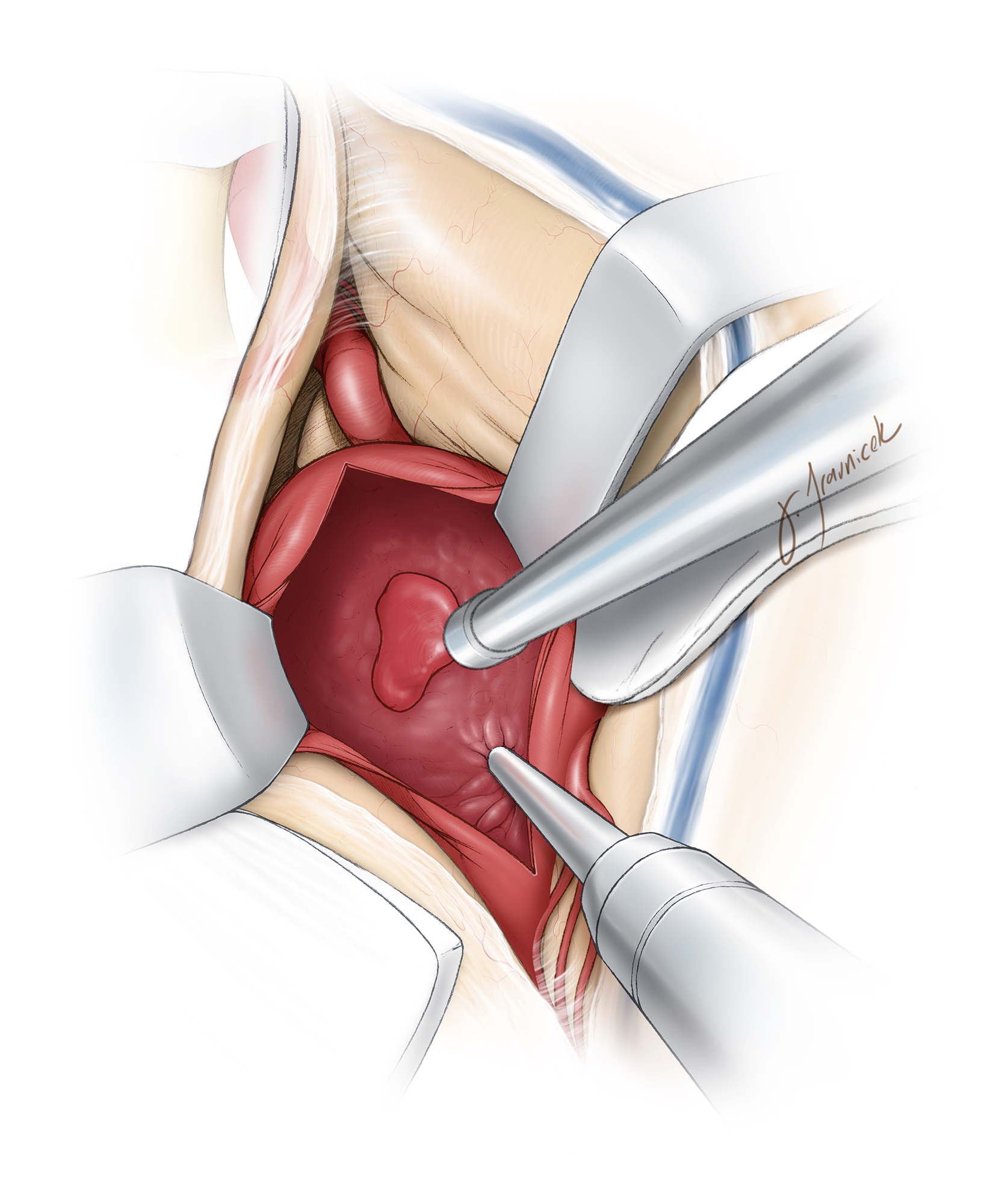 Figure 8: Intrasaccular thrombus evacuation is continued until bleeding from the live lumen of the sac is encountered. I avoid the live portion as much as possible until most of the clot or thrombus is removed. If an endarterectomy is necessary, the inlet of M1 and outlets of M2 trunks are avoided to prevent their dissection and subsequent occlusion (Redrawn from Tew, van Loveren, Keller*). 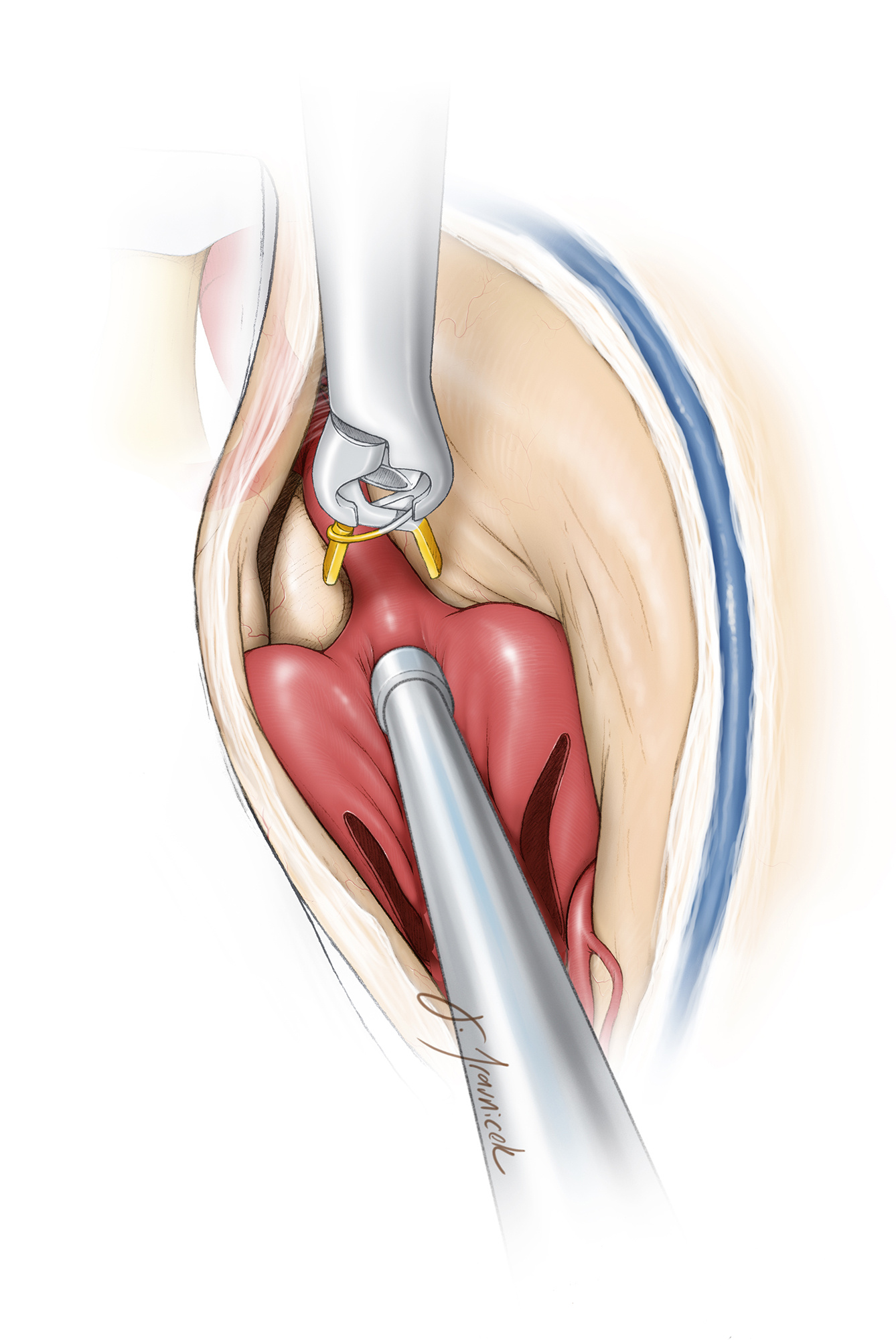 Figure 9: In an attempt to limit temporary occlusion time to the minimum, I place a piece of cotton on the initial bleeding site within the sac and continue thrombectomy until bleeding becomes overwhelming. Next, a temporary clip is placed on the distal M1. Mobilization of the decompressed aneurysm sac may be the only way to expose the M1 among anterior-pointing aneurysms. Restoration of normotension/normovolemia and encephalographic burst suppression using etomidate is required (Redrawn from Tew, van Loveren, Keller*). 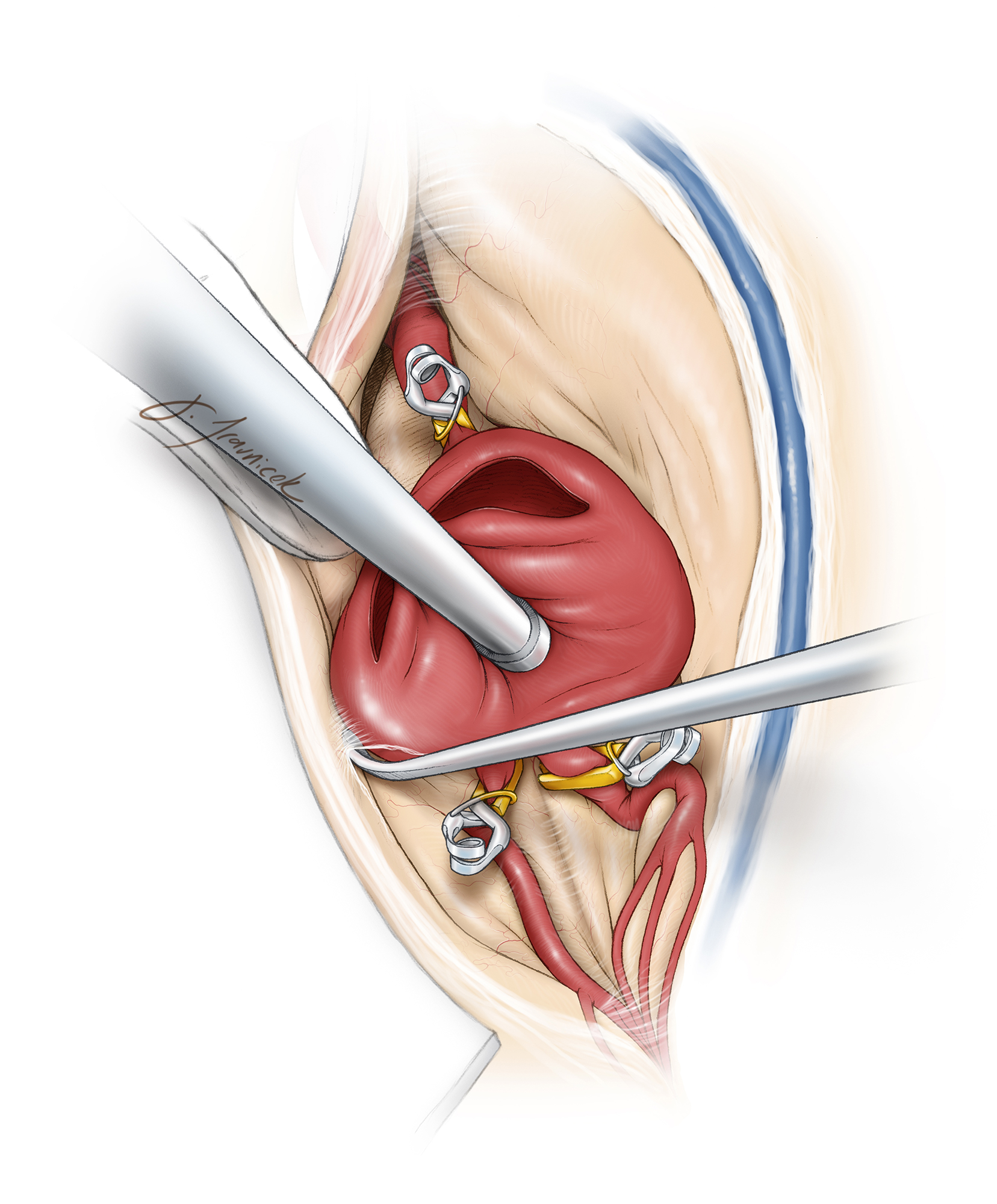 Figure 10: I tolerate some retrograde bleeding to avoid distal ischemia caused by trapping the aneurysm. However, if profuse retrograde bleeding is apparent, collateral support is strong; I therefore trap the aneurysm to continue dissection in a relatively clear field. This maneuver provides adequate visualization and dissection of adherent perforating arteries (lateral lenticulostriate arteries.) The decompressed aneurysm can now be mobilized to expose the M2 trunks (Redrawn from Tew, van Loveren, Keller*). 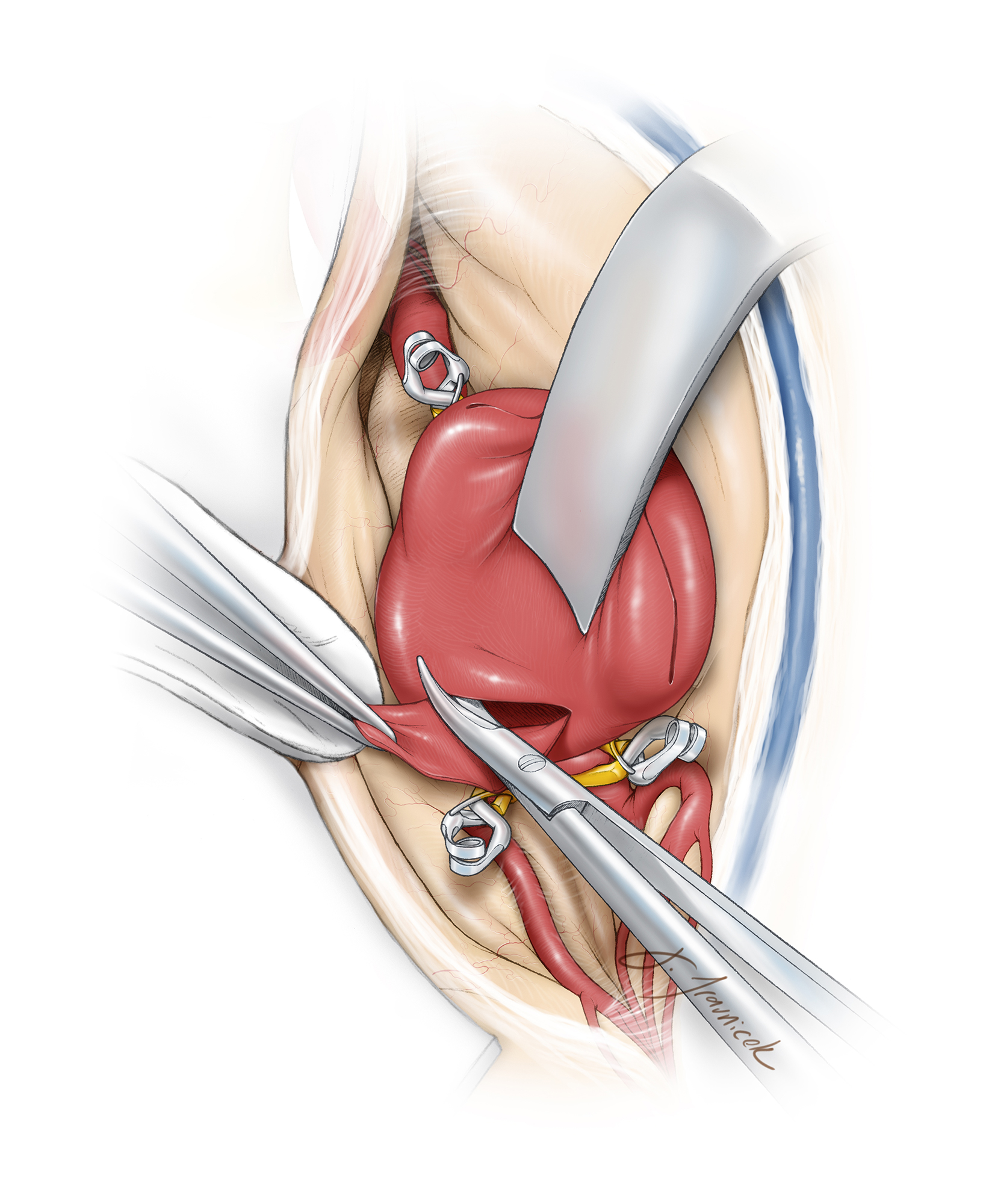 Figure 11: I usually do not cut the dome and I proceed with clip ligation. However, certain aneurysms may require partial excision of their walls to unveil their neck and relieve their mass effect (Redrawn from Tew, van Loveren, Keller*). 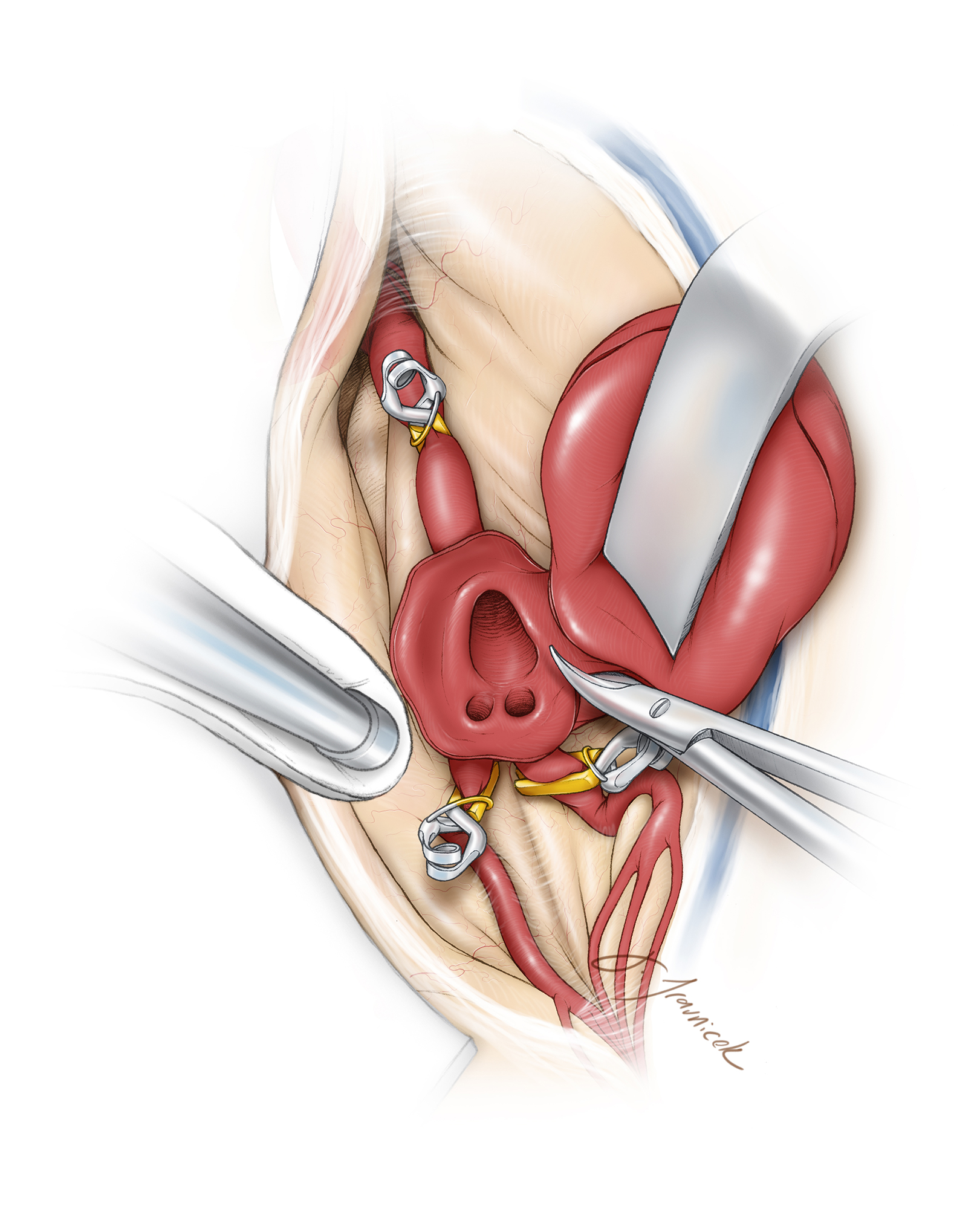 Figure 12: It is critical not to cut the sac too close to the inlet of M1 and outlets of M2 trunks so that enough wall tissue is left behind to reconstruct a generous atrium at the bifurcation during sac closure. These inlets and outlets have a thick wall and easily collapse if the closure of the sac is planned close to the neck (Redrawn from Tew, van Loveren, Keller*).

Clip ligation of MCA aneurysms should not compromise the outlets of the M2 trunks. 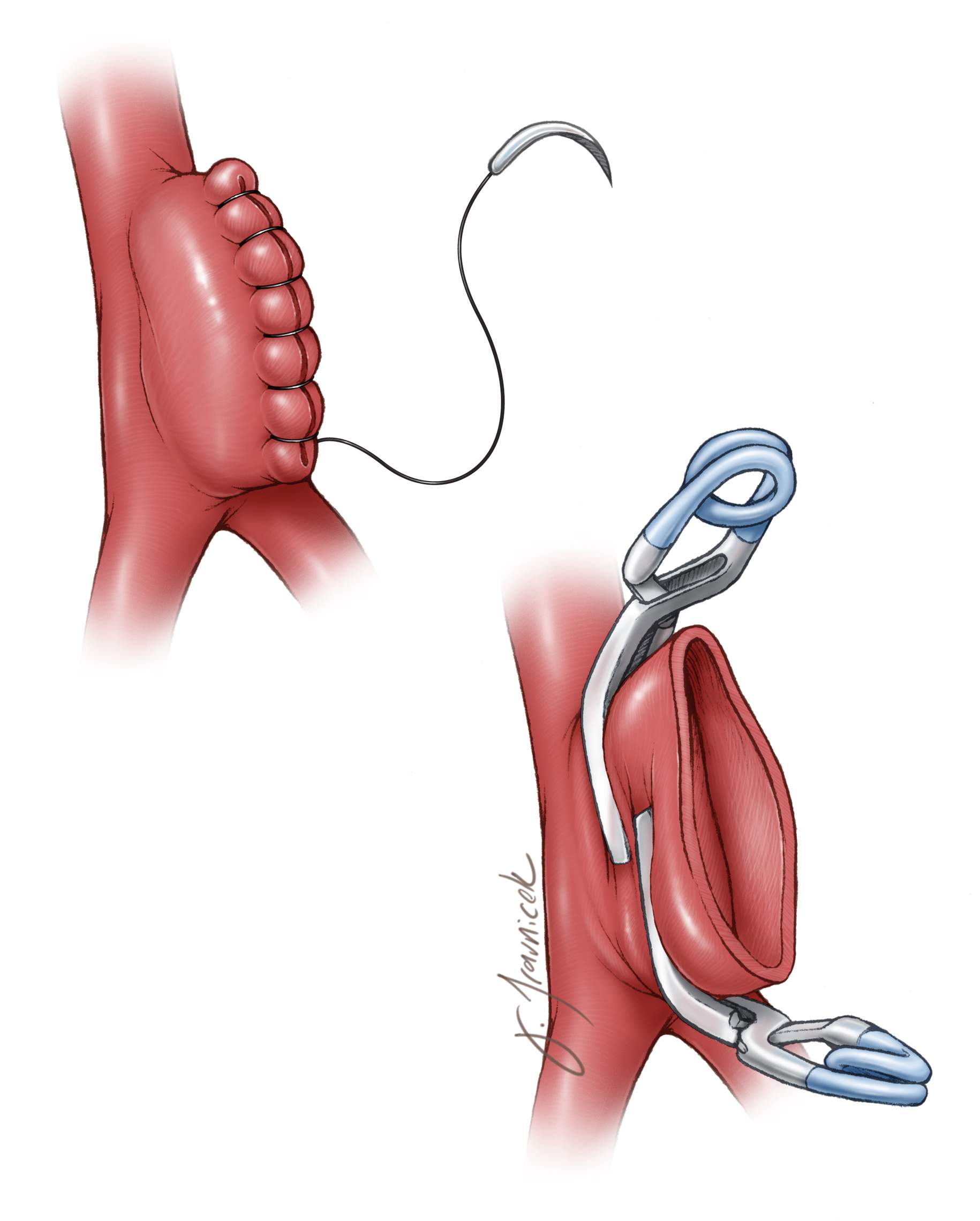 Figure 13: Although some colleagues describe closure of the sac using sutures (left image,) I have not attempted this maneuver because it may be more time consuming. I prefer to place two curved clips across the neck (lower image.) “Perfect” clip application is dangerous and often leads to stenosis of the M2 outlets. The extra-aneurysmal inspection may lead the surgeon to underestimate the degree of internal luminal stenosis of proximal trunks because of the thickness of the neck wall and presence of atherosclerosis (Redrawn from Tew, van Loveren, Keller*).

In patients with large or calcified aneurysms, a variety of clip constructs are described to adequately close the neck while preserving the M2 branches and the associated perforating vessels. Fenestrated clips may be used to preserve the adherent perforating vessels that cannot be safely separated from the aneurysm dome.

If the aneurysm has an atherosclerotic and/or calcified neck, intra-aneurysmal calcium may prevent a clip from collapsing the neck completely, and bolster clips (over the primary clip), stacked clips, or fenestrated clips (higher distal closing pressure) may be needed. If the calcium plaque is present at the neck, its collapse may also occlude the parent or daughter vessels; a fenestrated clip around the calcium, with a straight clip just above the first clip and calcium may be a very reasonable alternative tandem clipping construct.

If temporary clipping does not adequately soften the aneurysm for clipping of a nonthrombotic giant aneurysm, the dome may be pierced with a small-gauge angiocatheter connected to suction tubing for active suction decompression. 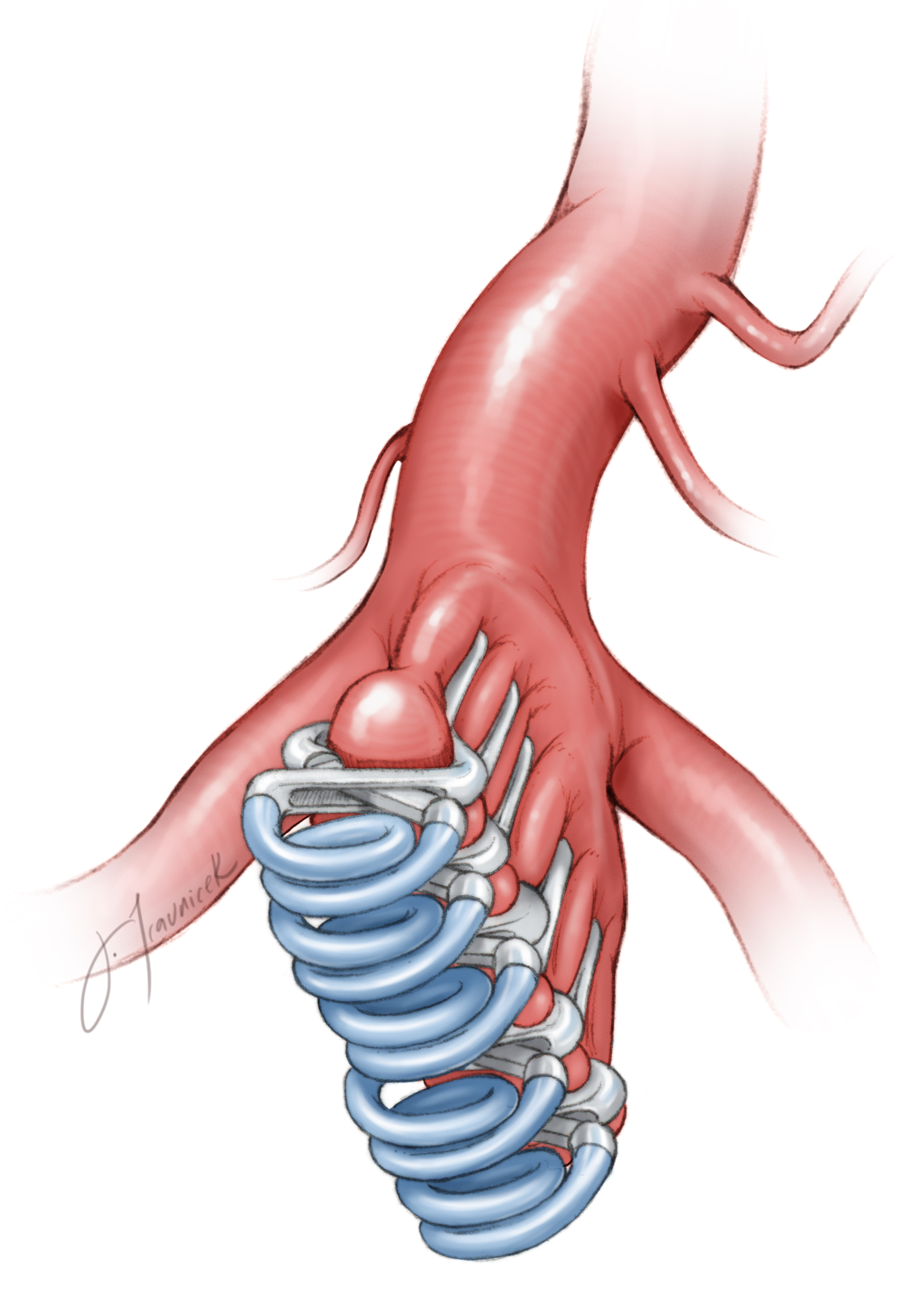 Figure 14: A dome-tube vessel reconstruction technique with stacked fenestrated clips for giant aneurysms is illustrated. The clips are stacked from the middle of the aneurysm to its periphery; straight clips may be used at the periphery. Blood flow is unimpeded at the proximal neck of the aneurysm. Again, imperfect clipping is important to avoid even subtle flow changes that can lead to ischemia in the distal MCA territories.

If one of the M2 branches is no longer patent after aneurysm thrombectomy or at risk upon clip deployment, I consider one of the following two options. 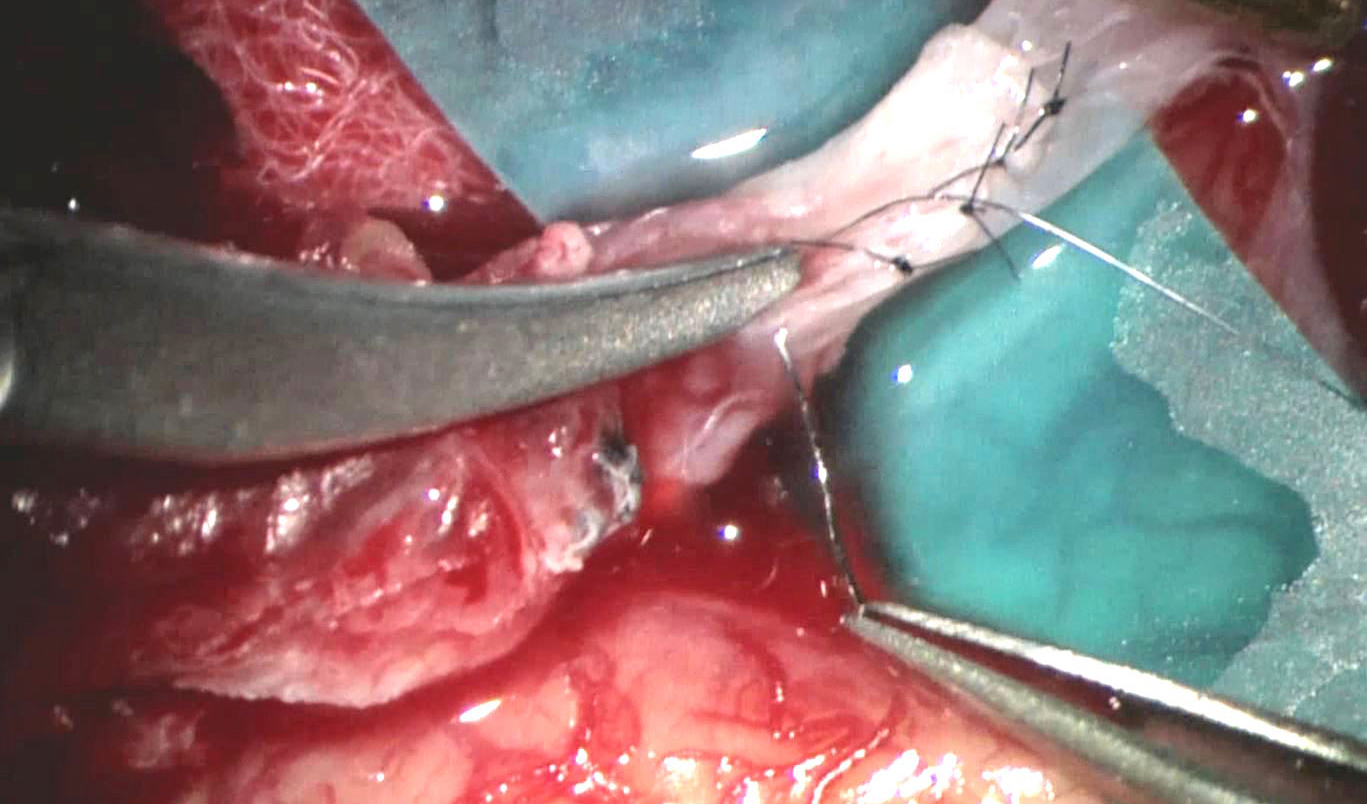 Figure 15: An STA-MCA bypass in the form of end-to-side anastomosis supplying the proximal section of the threatened M2 or its distal cortical branch is technically easy and effective.

The second option is a reimplantation technique during which the threatened M2 is the recipient vessel and the safe M2 is the donor, while the clip spares one of the M2s and sacrifices the other.

The postoperative management of the aneurysms described above is very similar to those of other intracranial aneurysms. Blood pressure parameters are usually liberated to allow a slightly hypertensive state during the immediate postoperative period. If revascularization was performed, the use of postoperative aspirin is recommended to potentially avoid thrombosis of the anastomotic site.