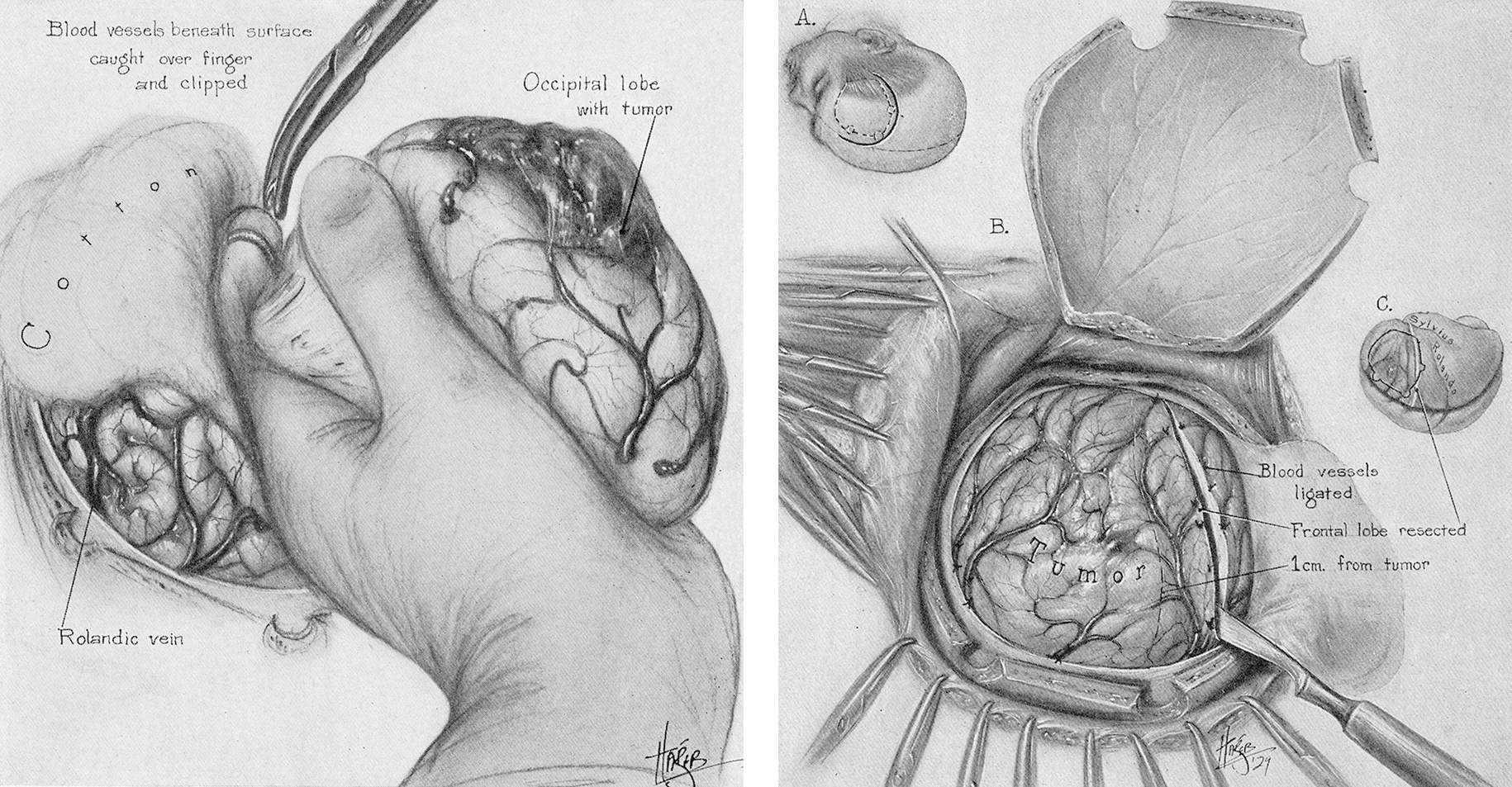 Figure 1: Walter Dandy demonstrated the techniques for resection of intraparenchymal tumors (Dandy WE. The Brain. Hagerstown, MD: WF Prior Company, 1966).

World Health Organization (WHO) grade I & II tumors of glial origin are considered low-grade gliomas (LGGs). There are three common types of LGGs, namley astrocytomas, oligodendrogliomas, and oligoastrocytomas. These tumors originate from one or both of the two glial cell types: astrocytes or oligodendrocytes. The extent of resection is favored to be one of the most influential determinants of overall survival, progression-free survival, and malignant transformation. However the selection bias reflected in the corresponding studies demands judicious application of the published data to current practice.

These tumors are typically discovered in young patients (20-64 years of age, with a median age of 39) who are otherwise without comorbidities and with many expected productive years of life, at the time of diagnosis. Although LGGs are more radiographically and histologically less aggressive than their high-grade counterparts, many patients still eventually die of their disease because of tumor progression and malignant transformation. Hence, safe maximal tumor resection can provide patients with the best opportunity for excellent quality and length of life.

Approximately 60–80% of patients with LGGs present with seizures of generalized semiology. Focal seizures, headaches, or progressive neurologic symptoms such as weakness, sensory loss, apraxia, or aphasia can also be among the presenting symptoms and signs

These tumors are rarely diagnosed incidentally on imaging performed for trauma or other unrelated reasons.

Usually a computed tomography (CT) scan or magnetic resonance imaging (MRI) is the first study to reveal the tumor; this depends on the location of first evaluation (emergency department, inpatient hospitalization versus outpatient visit). An MRI with and without gadolinium contrast is required for fine-detail distinction and assessment of the extent of the tumor and its contrast uptake. Remarkable enhancement is consistent with higher grade tumors.

LGGs tend to be non-enhancing (especially grade II tumors). However, pilocytic astrocytoma, an astrocytic LGG, is a cystic tumor with an enhancing mural nodule. Optic apparatus gliomas are diffusively infiltrating LGGs causing enlargement of optic nerve, chiasm or tract, with variable patterns of enhancement. Vasogenic edema is not a prominent feature of these lesions, in stark contrast to high-grade gliomas.

Functional MRI is important for operative planning is select patients. This modality provides valuable information about the relationship between the adjacent eloquent tissue and the lesion; however, it does not replace intraoperative brain stimulation mapping for tumors closely involved with vital cortices. Other studies, such as diffusion tensor imaging (DTI), map the white matter tracts around the tumor and estimate the degree of their infiltration.

Figure 2: Classic findings for a nonenhancing well-defined cortically-based LGG. Evidence of punctate calcification and a somewhat heterogeneous appearance on these T2 sequences are consistent with a diagnosis of an oligodendroglioma.

Figure 3: A LGG located in close proximity to the motor cortex (upper images). Functional MRI and DTI revealed close proximity of the lesion, but its distinct borders relative to the vital tracts (middle image). Intraoperative mapping guided gross total resection of the lesion without any new neurological deficits (lower images).

The indications for resection (versus biopsy alone) include reliable tissue diagnosis without the risk of sampling error, control of medically refractory seizures, prevention of malignant transformation through cytoreductive surgery, and improvement in the patient’s survival.

Resection of large well-delineated superficial lesions within silent regions or frontotemporal poles of the brain is universally indicated, especially in younger patients. Resection of tumors in the vicinity of eloquent areas is recommended, but must be individualized based on the location and diffuseness of the tumor.

Some operators believe that at least >80% of the tumor should be potentially resectable in order to justify the risk-to-benefit ratio for considering microsurgical excision. Diffuseness and the location of the tumor dramatically affect the role of surgery. Multifocal tumors are more likely to be biopsy candidates.

Low-grade glial tumors are often not associated with surrounding edema. Pre-, intra-, and postoperative use of steroids are controversial, but often administered; perioperative anticonvulsant medications are strongly recommended.

The decision to perform an awake versus sleep mapping, or standard craniotomy must be considered, influenced by the eloquence of the involved cortices. Please refer to the sections on Language Mapping for Glioma and Sensorimotor Mapping for Glioma for important details regarding preparation, craniotomy, and other operative considerations.

A reasonable number of patients will require a subsequent reoperation for recurrent tumors. The initial incision should therefore be carefully planned. Linear incisions offer the most flexibility and robust vascular support for future reoperations.

Although small linear incisions are desirable, some patients are better served by a larger incision designed for aggressive tumor resection while accessing both the lesion and the surrounding normal cortex for mapping and electrocorticography.

For general details regarding exposure and craniotomy, please refer to other sections of this Atlas, including the Cranial Approaches volume. Intraoperative Navigation guides the extents of an adequate craniotomy. 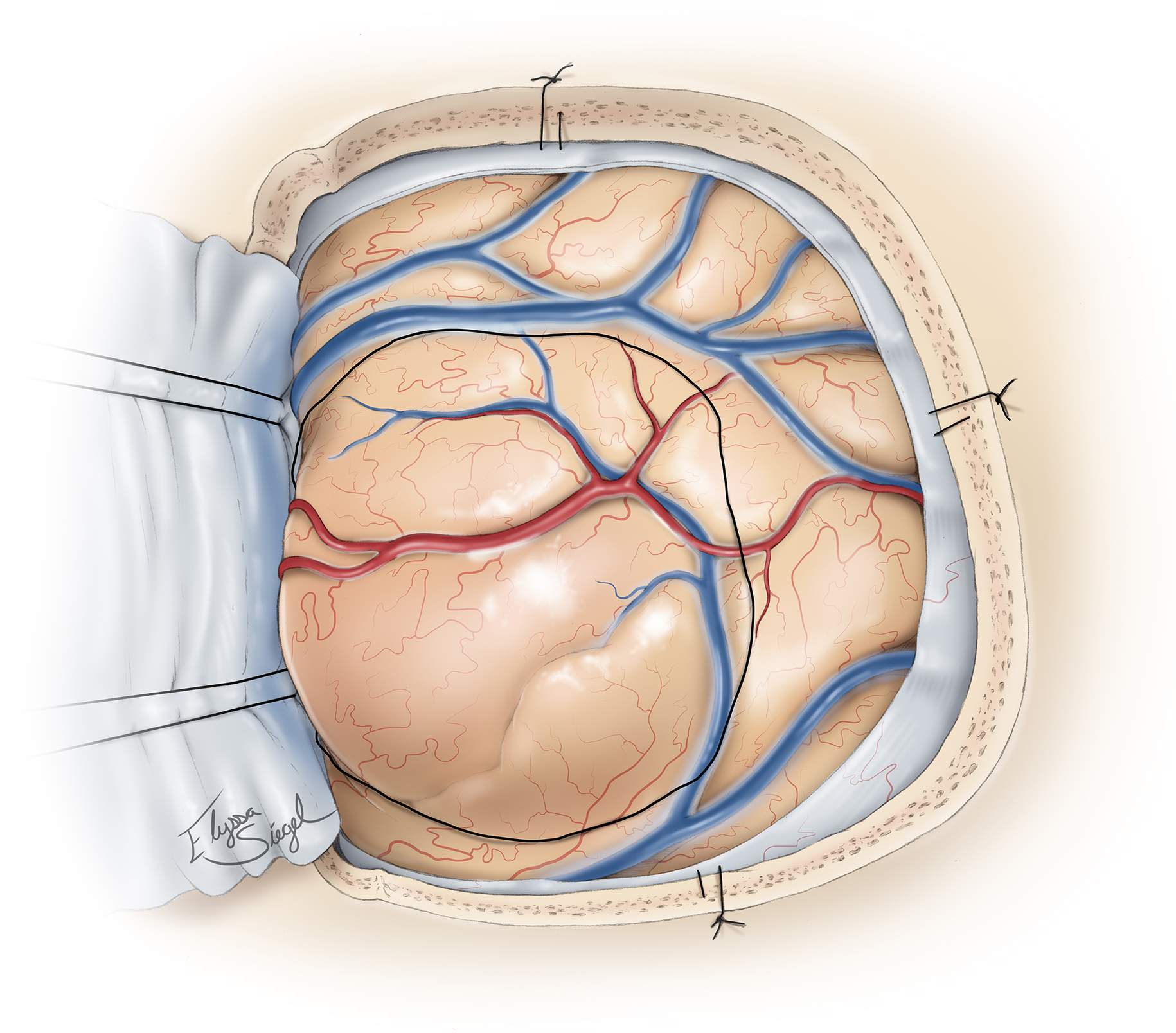 Figure 4: The dura may be opened in either a curvilinear or stellate fashion. The exposure must reveal a generous surface of the brain involved with the tumor and the surrounding normal cortices. A ribbon of relatively normal-appearing cortex often covers the edges of the tumor.

Before brain shift (caused by tumor debulking and/or release of cerebrospinal fluid) occurs, I use navigation data and mark the tumors’ boundaries using a piece of silk suture. A detailed inspection of the brain surface reveals that the involved gyri are expanded, discolored and appear hypovascular. If necessary, cortical stimulation mapping can precisely localize the boundaries of functional cortices. The surrounding large veins and arteries are identified and preserved.

Figure 5: Cortical LGGs may (left) or may not (right) cause changes in their overlying cortical morphology. In the left image, the right frontal premotor cortices are expanded and the parasagittal veins are displaced posteriorly. The right posterior frontal tumor in the right image (bounded by the green suture) is causing minimal alteration in the cortical morphology. 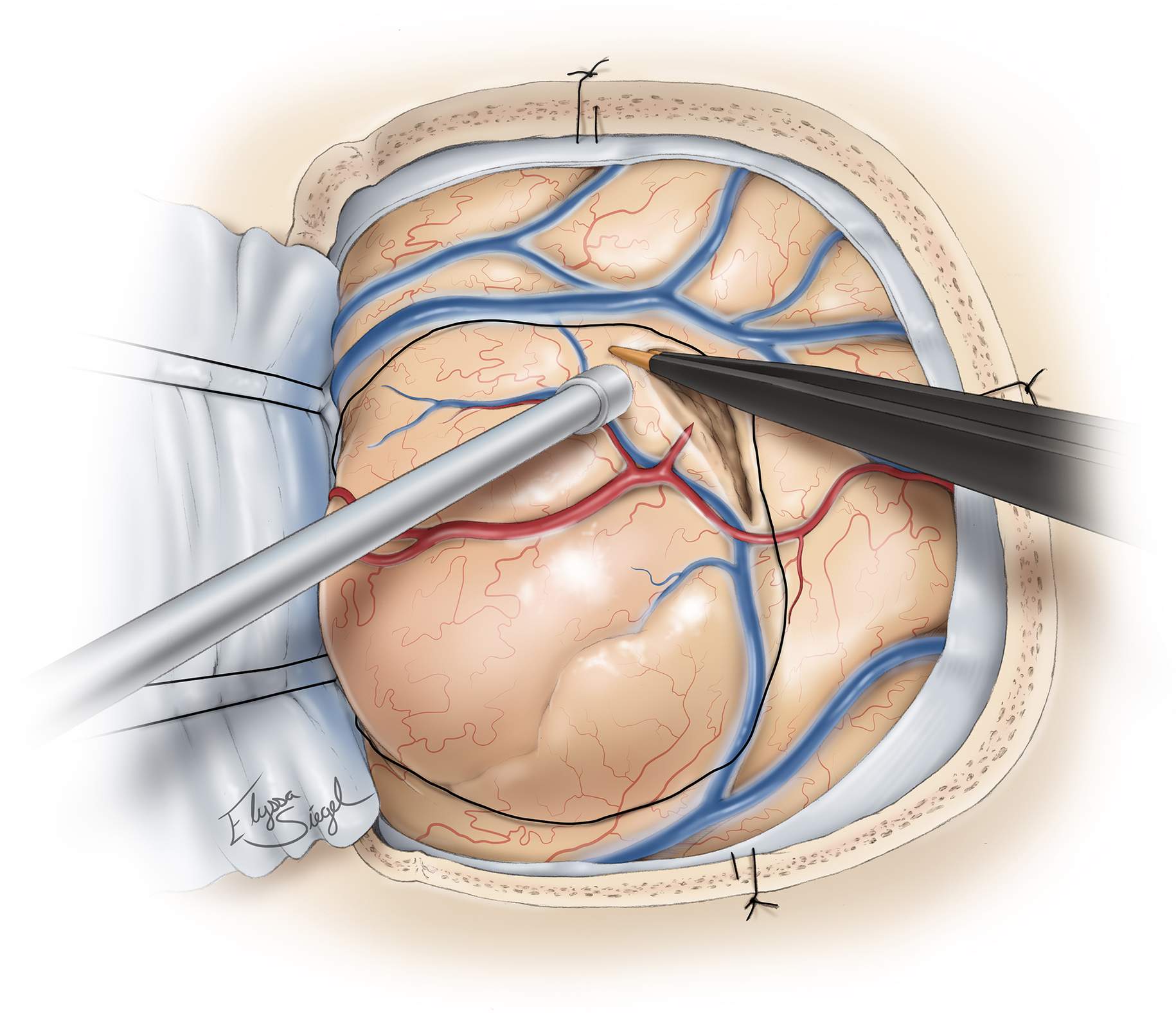 Figure 6: Initial subpial coagulation marks the superficial tumor edges and devascularizes the surface of the tumor. En passage cortical arteries and veins are protected. A piece of tumor is sent for histologic examination and confirmation of the preoperative diagnosis.

Some LGGs have diffuse edges and are difficult to fully delineate from the surrounding normal/functional tissue, whereas others are more definitively demarcated. In other words, some LGGs are gray, soft, suctionable, and have distinct textures; these features significantly facilitate their gross total resection. Many other tumors are relatively fibrous and have heterogeneous consistency that complicates their resection because the operator has no reliable method to differentiate the tumor from the peritumoral tissue.

Gentle dynamic maneuvers to mobilize the surrounding brain minimize retraction injury. Subpial resection of the tumor along the medial interhemispheric or Sylvian fissure opercula is conducted. 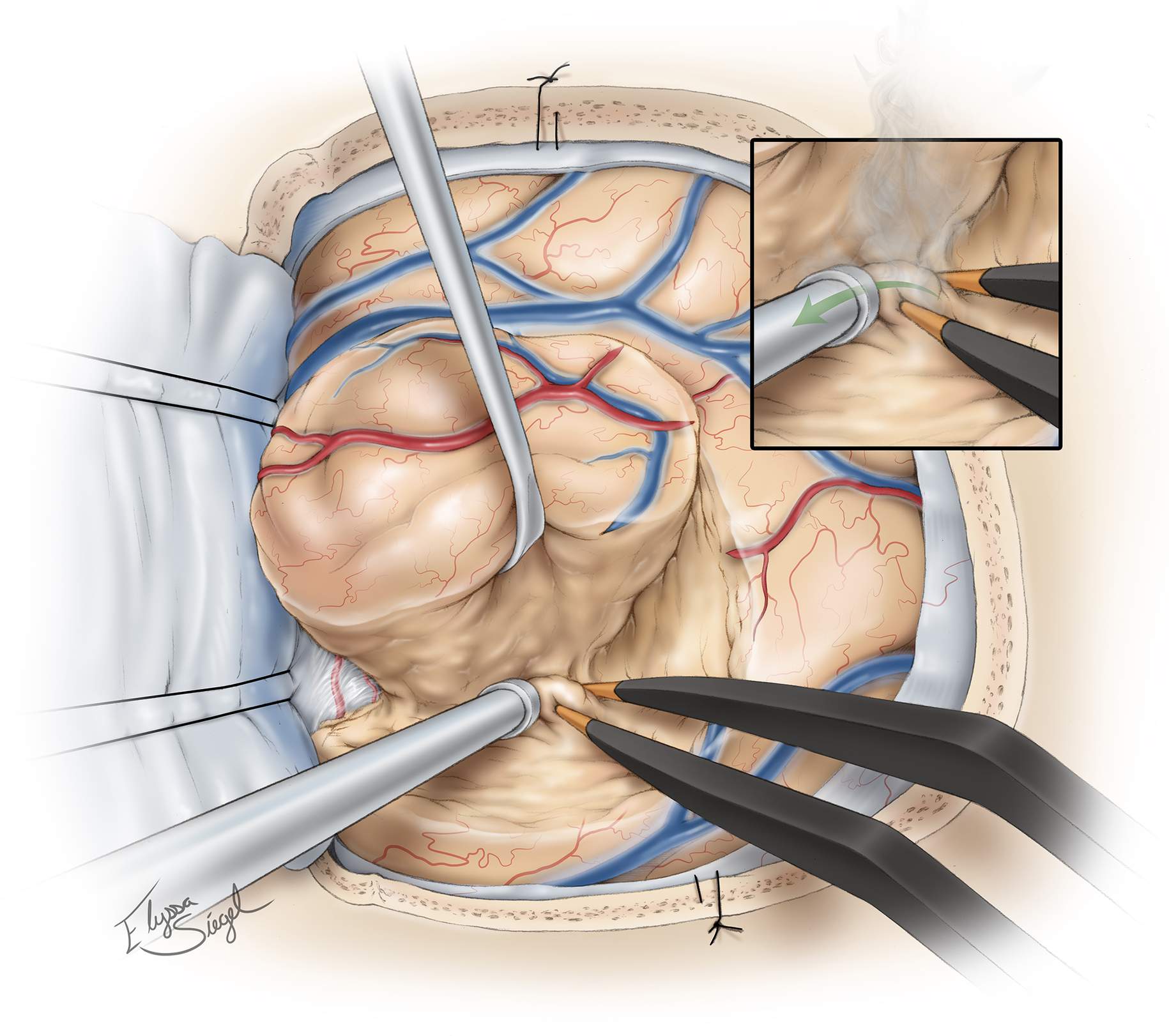 Figure 7: I prefer to circumferentially disconnect the tumor as guided by the tumors’ consistency and intraoperative navigation. I also attempt to remove the tumor en bloc, if possible. Central debulking leads to a greater loss of navigational accuracy. Importantly, en bloc removal of the tumor advances technical efficiency, minimizes blood loss, and allows the operator to keep his or her orientation while maintaining the resection planes along the tumor margins. Working simultaneously on both the inside and the periphery of the tumor can lead to confusion about the tumors’ pseudo margins.

The suction apparatus can be used as a vector of dynamic retraction to prevent the wall of the resection cavity from collapsing.

The above technique disconnects and coagulates simultaneously. In other words, the bipolar forceps effectively act as tumor scissors via the repeat spring action of the forceps’ tips while coagulating (above image, figure 7, inset).

The response of the tumor to bipolar coagulation can be quite different than that of the normal brain; this is another important parameter that can guide the surgeon. Some LGGs are more fibrous and some are even more gelatinous that normal brain. The distinction along the peritumoral region can be quite challenging. 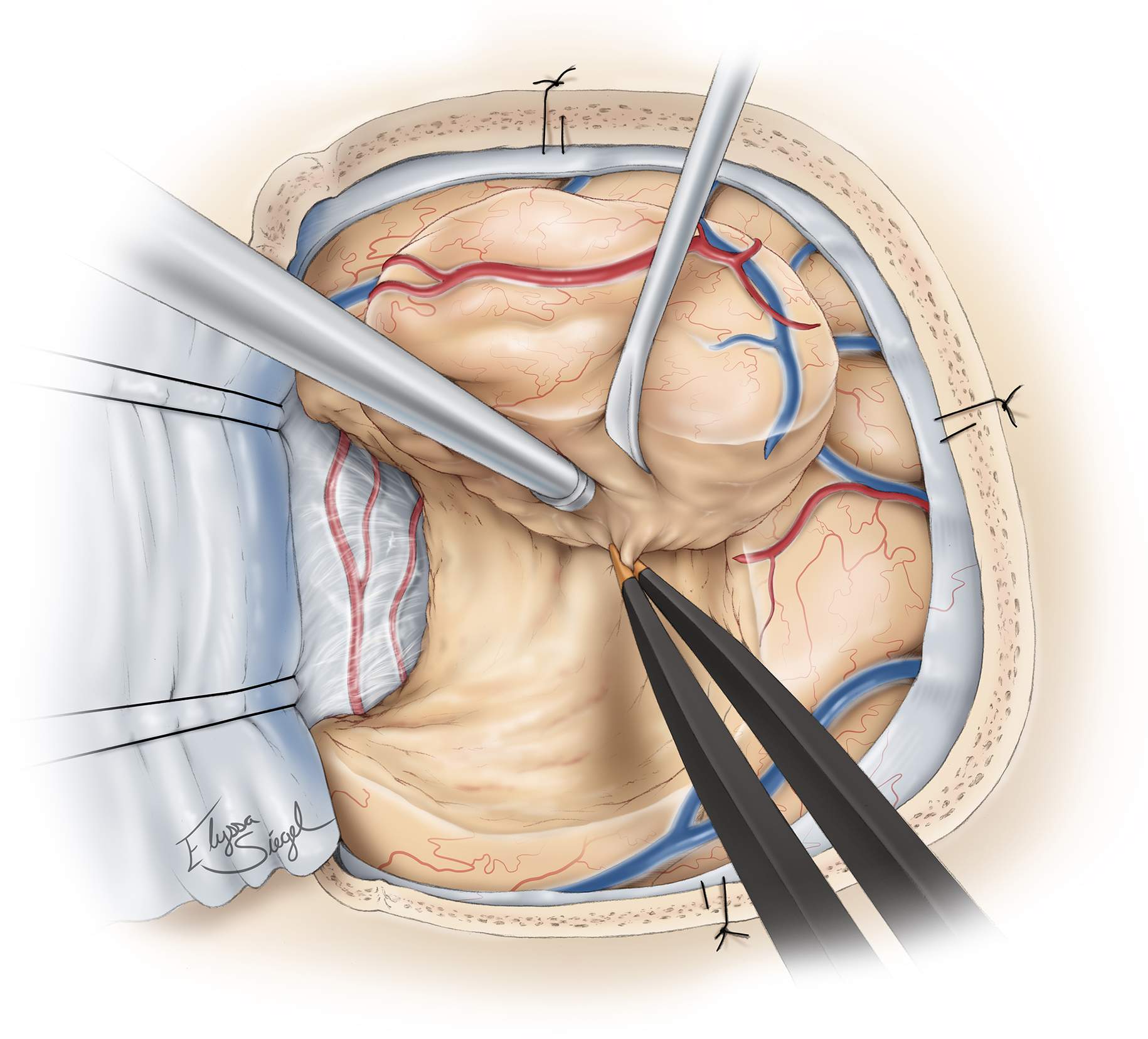 Figure 8: The tumor is finally disconnected at the depth of the cavity and removed. Navigation is then used to estimate the extent of resection. Further resection within the walls of the cavity is necessary to achieve reasonable goals. This maneuver is continued until clean white matter (bright and glistening) is encountered in all directions. The tumor often appears dull. LGGS often extend to the level of the ependyma and entry into the ventricle confirms removal of the deepest portion of the tumor.

Many LGGs respect the pial surfaces of their gyri, but not the underlying white matter tracts. The accuracy of navigation drops precipitously at the deeper portions of resection cavity due to the brain shift caused by tumor debulking. The surgeon’s experience in using the tumor’s texture and response to suction in guiding resection can become an important element to ultimately determine the extent of removal on postoperative imaging.

Unfortunately, there is no reliable and practical method to guide tumor removal for LGGs along their edges; these edges frequently appear and feel almost the same as normal brain or tend to infiltrate normal functional cortices and white matter tracts. The surgeon should become very familiar with the tumor’s texture during the early parts of the operation and use this information for handling the final more indistinct periphery of the tumor. The ventricle is often a good landmark to define the deeper margins of the resection cavity.

Intraoperative MRI (iMRI) may be helpful, but in my opinion, is an inefficient use of operative time and cannot replace the surgeon’s experience.

Some tumors engulf vessels (such as the middle cerebral artery complex). Aggressive use of the suction tip in these regions may lead to vascular injury to the small perforating vessels and should be avoided. The operator’s enthusiasm for aggressive tumor removal must be balanced against the risk of injury to these vital vessels. Currently, there is no surgical method that can claim complete removal of LGGs. Therefore, preservation of function is the first priority in managing these tumors.

The principles of closure are the same as those discussed in the Cranial Approaches volume.

A postoperative MRI is obtained within 48 hours of resection to assess the extent of tumor removal. A critical, honest, and meticulous review of this study is necessary for advancing the surgeon’s learning curve for improving tumor removal for the future patients.

Steroids are weaned slowly as tolerated. Anticonvulsants are administered prophylactically (or increased in dosage) during the postoperative period.