Trigeminal neuralgia (TN) has been called one of the worst pains that can afflict a human being. John Fothergill was one of the first to describe this pain in his 1773 article: “On a Painful Affliction of the Face.” The pain of TN is relatively easy to diagnose—it is typically unilateral, episodic, severe, stabbing, shock-like or lancinating, and exacerbated by cutaneous stimuli such as tactile pressure, chewing, brushing, a breeze of air, or shaving. A crude annual incidence of TN is approximately 5.7 per 100,000 women and 2.5 per 100,000 men. Peak incidence lies between ages 50 and 60 years, and prevalence increases with age.

Initially a small dose of an antiepileptic drug (such as carbamazepine), rather than an analgesic drug, can provide excellent pain relief for TN. However, some patients do not respond to antiepileptic drugs or they suffer from adverse side effects, so they will qualify as candidates for one of the surgical procedures (microvascular decompression, stereotactic radiofrequency thermoablation, glycerol or balloon compression, and radiosurgery rhizotomy).

Regardless of the responsible etiology in the pathogenesis of this pain, MVD surgery, through mobilizing the offending vessel or by performing a rhizotomy, provides an effective and durable palliative option for symptomatic relief. Although percutaneous procedures offer a less invasive route to the Gasserian ganglion for rhizotomy, posterior fossa exploration is the only procedure that can identify an offending vessel via a nondestructive procedure with a more lasting result.

The patient’s age, medical comorbidities, and preferences are important factors that can limit the application of an MVD operation. I offer percutaneous procedures to my patients who are older than 70 years or who have prohibitive medical comorbidities that preclude their candidacy for an MVD operation. I also offer a percutaneous procedure to patients who have a diagnosis of multiple sclerosis and associated TN, regardless of their age. 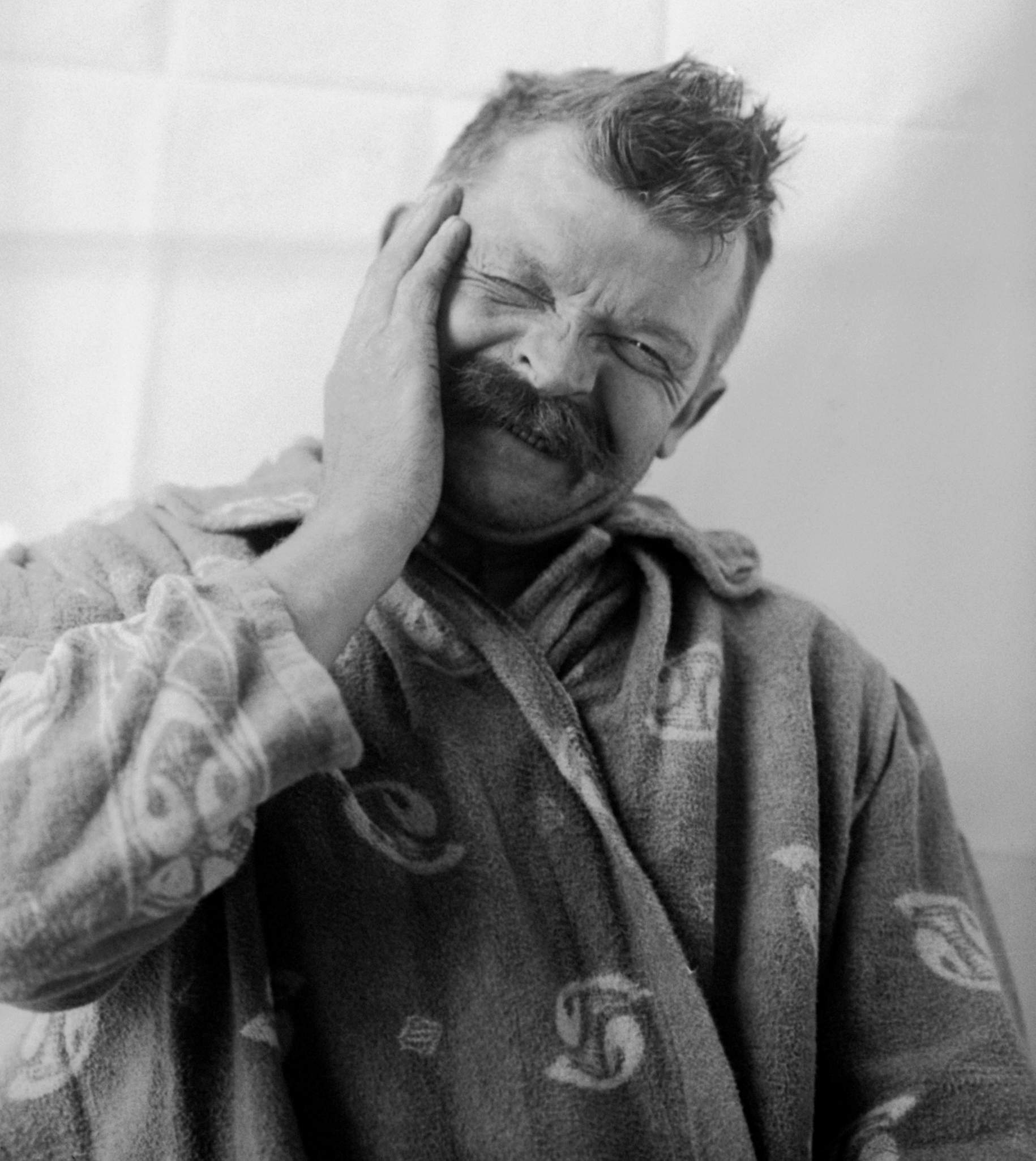 Figure 1: One of the first patients of Harvey Cushing suffering from an attack of trigeminal neuralgia. This image is most likely one of the earliest photographs of a patient with this disease (Courtesy of Cushing Center at Yale University).

The pathogenesis of cranial nerve hyperactivity syndromes, such as TN, hemifacial spasm, geniculate neuralgia, paroxysmal positional vertigo, and glossopharyngeal neuralgia, has remained elusive. Vascular compression of the nerves near the brainstem (neurovascular conflict-peripheral hypothesis) has been proposed as the principal factor involved in genesis of cranial nerve hyperactivity through demyelination of the root entry/exit zone of the nerve (ephaptic transmission).

Recently, investigators have implicated other factors as causes for these disorders, including hyperactivity of the brainstem nuclei (central hypothesis).

The diagnosis of TN and other episodic, unilateral neuralgiform pain disorders is based almost entirely on the patient’s history. The character of TN pain is typically unilateral and neuralgic: episodic, severe, stabbing, shock-like or lancinating, and exacerbated by cutaneous stimuli such as tactile pressure, chewing, brushing, a breeze of air, or shaving.

The periods of remission tend to get shorter over time and the attacks of pain often get longer. Patients may have as few as three or four attacks a day or as many as 70 per day. There is often a refractory period when the pain cannot be triggered. Pain can occur at night in a third of patients.

It is unusual to have TN in the first ophthalmic division of the trigeminal nerve only. The tentative desirable response to neuropathic pain medications, such as carbamazepine or gabapentin, often supports the diagnosis of typical TN. The pain characteristics may change with the use of neuropathic pain medications or previous percutaneous procedures, and may become more constant. Therefore, the clinician should inquire about the character of the pain at its inception before any treatment was rendered. Patients who complain of neuropathic pain (only constant or burning pain and facial numbness without triggering stimuli) are suffering from atypical facial pain, not TN, and are not candidates for the procedures described in the following chapters.

It is important to carefully examine the patient’s face and oral cavity along with the cranial nerves. Detailed neurologic examination of patients with TN is usually normal, but minor sensory changes in the corresponding distribution of the trigeminal nerve are fairly common. All patients who are planning to undergo any intervention for TN should have brain magnetic resonance imaging (MRI) or a computed tomography (CT) scan to exclude structural pathologies such as meningioma, acoustic neuroma, and epidermoid tumors. A vascular loop compressing the trigeminal nerve may be evident on high-resolution T2WI.

Treatment of all patients with classical TN begins with drug therapy, usually anticonvulsants, and the gold standard is carbamazepine. Newer drugs such as oxcarbazepine are rapidly gaining popularity due to better side-effect profiles. These medications can initially provide 100% pain relief in 70% of patients. However, despite the use of neuropathic pain medications, many patients’ pain becomes refractory and they seek more durable surgical treatment.

Indications for surgical intervention include, but are not limited to, failure of or adverse side effects from medical treatment. Microvascular decompression (MVD) has been shown to provide the most durable satisfactory results; however, patients older than 70 years or with associated prohibitive medical morbidities or conditions that preclude general anesthesia can be considered suitable candidates for less invasive percutaneous or radiosurgical procedures.

Percutaneous procedures for TN are palliative destructive procedures that involve controlled damage to the trigeminal nerve root with the goal of relieving pain. These procedures include radiofrequency rhizotomy/thermoablation, glycerol rhizotomy, and balloon compression. All of these procedures are performed via a foramen ovale puncture, which was first described by Härtel in 1914. We will discuss these modalities individually and their advantages and potential pitfalls.

For patients who cannot undergo an MVD operation, I generally prefer balloon compression rhizotomy because it is easy to perform and immediately effective. Radiosurgery often does not offer immediate pain relief and many patients continue to require neuralgic medications for their pain control.

If the patient harbors comorbidities that preclude the use of general anesthesia and immediate pain relief is not a concern, I offer radiosurgery as a reasonable option.

I use the algorithmic approach shown in the following illustration for selection of the operative intervention. 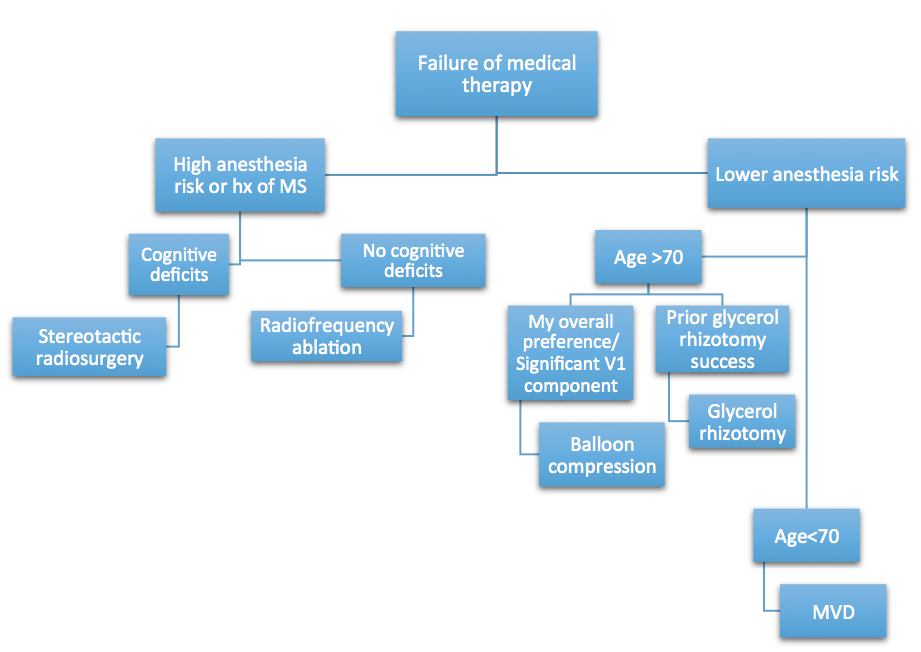 Patients who are candidates for percutaneous treatment of TN are generally elderly and harbor multiple medical comorbidities. These patients should undergo extensive preoperative anesthesia evaluation to assess their cardiac and respiratory status. Special emphasis should be placed on cardiac evaluation since a high proportion of patients will experience bradycardia and hypotension secondary to trigeminal depressor response once the foramen ovale is accessed. For this reason, some surgeons advocate placing a transcutaneous or a transesophageal pacemaker after induction of anesthesia.

Patients should be encouraged to learn how to localize and designate where they perceive facial stimulation during radiofrequency ablation. Patients are encouraged to discontinue anticoagulation 5-7 days before the procedure, although this is not absolutely necessary. A baseline neurologic exam focusing on the face should be performed. Corneal reflex and any areas of facial numbness are carefully documented. Furthermore, weakness in any of the trigeminal innervated muscles (masseter, pterygoids) should also be noted. Dentures should be removed before the procedure. Preoperative neuropathic pain medications should be continued and tapered off gradually in the postoperative period.

Patients who suffer from numbness in the distribution of their pain are not candidates for percutaneous procedures.

Procedures: Please refer to the following individual chapters regarding the specifics of technique:

Placement of the Needle within the Foramen Ovale

After any percutaneous procedure, I prefer to keep patients under observation for 2 to 4 hours before their discharge. An immediate postoperative examination should examine facial and corneal sensation and motor strength of the masseter, pterygoids, ocular, and facial muscles. Any bleeding from the needle insertion site can be simply treated by applying pressure. Meticulous eye care is needed in cases when corneal reflex is likely to be compromised.

Preoperative medications are continued and slowly tapered over the next 2 weeks. Patients and their family members should be given basic instructions about numbness in the face and eyes. They should be informed about the small likelihood of cold sores a few days after the procedure and instructed to contact their treating physicians. Fever and confusion during the 2-week postoperative period should raise the suspicion of meningitis.

Multiple structures surround the trigeminal ganglion, including the carotid artery, cranial nerves along and within the cavernous sinus, and the temporal lobe. All these structures are at risk if the selected trajectory is erroneous. The percutaneous procedures also place the cardiovascular system under stress, so our anesthesiologist colleagues should consider relevant risks.

According to a systematic review of ablative neurosurgical techniques for treatment of TN (Lopez et al., 2004), radiofrequency rhizotomy is associated with the greatest number of cumulative complications (29.2%), followed by glycerol rhizotomy (24.8%), and balloon compression (16.1%). However, the risk of vascular and nerve injuries and meningitis was highest with balloon compression. Permanent facial sensory loss is most common after radiofrequency rhizotomy and can affect the quality of life in up to two-thirds of patients (Zakrzewska et al., 1999). 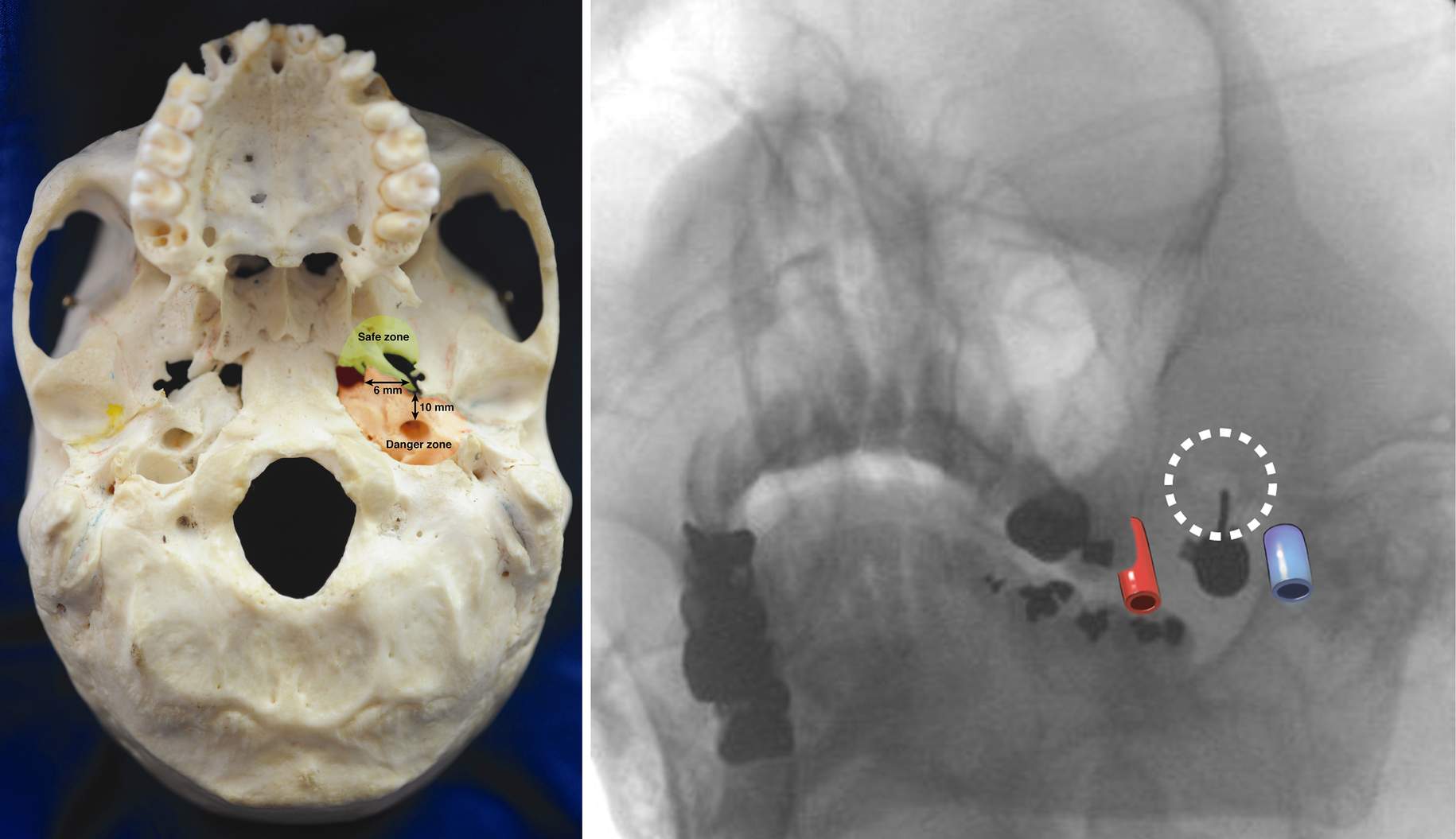 Figure 2: The safe (green) and danger (orange) zones for navigating the trajectory of the needle (left image). The approximate locations of the left internal carotid artery and jugular vein are demonstrated on an oblique intraoperative X-ray obtained parallel to the needle (right image).

Radiofrequency Rhizotomy: Initial pain relief rates as high as 97.6% were reported in a study of 1,600 patients, with complete pain relief rates of 92% at 60 months and 97% at 180 months when patients were treated multiple times (Kanpolat et al., 2001). According to a systematic review (Lopez et al., 2004), radiofrequency rhizotomy seems to provide the highest rates of sustained complete pain relief among percutaneous techniques.

According to Pollock (2005), the only statistically significant predictor of positive treatment outcome was pain during glycerol injection. The therapeutic effects of glycerol decreased rapidly after 24 months, and glycerol rhizotomy seemed to be the least beneficial of the three techniques at 36 months (Lopez et al., 2004). According to Tatli et al. (2008), the recurrence rate was highest after glycerol rhizotomy (62%).

Balloon Compression: Balloon compression offers excellent initial pain relief, with rates as high as 94% in a study of 50 patients (Brown et al., 1993). Actuarial rates of complete pain relief were 91% and 69% at 6 months and 3 years, respectively. More recently, Asplund et al. (2010) reported results from 87 procedures with an initial success rate of 94% and a median pain-free time of 28 months. Recurrence rates were high (average, 26% with a mean time to recurrence of 18 months; Brown et al., 1993).

Although the procedure can be repeated, the results of a new compression are perhaps not likely to last as long (Fraioli et al., 1989), and the subsequent success rates may be lower (Kouzounias et al., 2010).

Arrese I, Lobato RD, Alén JF, Lagares A, Miranda P. Acute subdural and intratemporal hematoma as a complication of percutaneous compression of the gasserian ganglion for trigeminal neuralgia. Neurocirugia (Astur). 2005;16:177-182.

Asplund P, Linderoth B, Bergenheim AT. The predictive power of balloon shape and change of sensory functions on outcome of percutaneous balloon compression for trigeminal neuralgia. J Neurosurg. 2010;113:498-507.