MCA Aneurysm Associated with a Hematoma

Open Table of Contents: MCA Aneurysm Associated with a Hematoma

Clip Ligation of an MCA Aneurysm Associated with a Hematoma

Because of their location, lateral projection, and attachment of their dome to the temporal lobe, nearly 50% of ruptured middle cerebral artery (MCA) aneurysms present with intraparenchymal hematomas. Most (80%) of these hematomas are located in the temporal lobe.

Any patient with a spontaneous hematoma around and within the Sylvian fissure, with or without associated subarachnoid hemorrhage, should undergo vascular imaging to rule out an underlying vascular anomaly.

Because of the distal location of MCA aneurysms and their wide-neck morphology, clip ligation is currently more successful and has lower risk than endovascular therapy for most patients. The emergent need for surgical decompression of a temporal lobe hematoma is another indication for microsurgery.

A careful analysis of the preoperative studies is warranted, including the length and morphology of the M1 and the direction of the aneurysm dome. The presence of MCA trifurcation should be evaluated.

The exact location of the aneurysm along the vascular tree should be determined, and the surgeon constructs a mental map of the M2 branches leading to the aneurysm neck. I study the location of the frontal trunk because this vessel is hidden in the operative blind spot for exposure through the superior temporal gyrus as described below. The presence of calcium plaques across the neck or dome indicates a need to prepare for revascularization.

The exact location of the clot directs the operator toward the location of the ruptured dome. The tract of the hemorrhage will predict where bleeding will occur if an intraoperative rupture happens before proximal control is secured. For example, if the hematoma extends into the frontal lobe, intraoperative rerupture of the aneurysm leads to a cortical rupture in the inferior frontal gyrus, rather than the fissure or superior temporal gyrus.

A pterional craniotomy is the ideal approach for exposing MCA aneurysms.

MCA bifurcation aneurysms are the most common causes of aneurysmal intracerebral hematomas requiring emergent evacuation. In this chapter, I will review the technical tenets for microsurgical hematoma evacuation and clip ligation of these aneurysms. For general concepts related to craniotomy and exposure of MCA aneurysms, refer to the Middle Cerebral Artery Aneurysm chapter.

The pterional craniotomy for MCA aneurysms extends more distally along the Sylvian fissure than for anterior communicating artery aneurysms. This factor is especially applicable for long M1 segments harboring posteriorly projecting aneurysms. The location of the hematoma often dictates a wider craniotomy.

The vertical distance of the aneurysm/hematoma from the zygomatic arch and its horizontal distance with respect to a vertical line passing through the external auditory canal define the borders of the craniotomy.

The craniotomy should be more generous if there is a potential need for craniectomy because of uncontrollable brain swelling.

The most important aspect of this surgery is to gain proximal control early. Hyperosmolar therapy using mannitol and ventriculostomy for cerebrospinal fluid (CSF) drainage help relax the brain early without a need for aggressive hematoma evacuation that risks premature sac rupture.

In cases of subarachnoid hemorrhage or an intraparenchymal hematoma, some colleagues prefer to start the dissection proximally near the supraclinoid carotid cisterns, in order to gain proximal control early by dissecting anterograde along the ICA to the MCA bifurcation. This strategy places considerable retraction force on the tense frontal and temporal lobes in the presence of a large intracerebral hematoma. This retraction may destabilize the clot on the sac and lead to premature intraoperative hemorrhage.

The presence of tenacious and thick organized clot within the fissure can offer technical challenges for transsylvian microdissection.

For the above reasons, I have used the transcortical approach for MCA aneurysms associated with temporal or frontal clots. Immediately after dural opening, subfrontal dissection secures proximal control at the supraclinoid carotid artery and CSF is released from the opticocarotid cisterns. Since most hematomas are in the temporal lobe, a small corticotomy over the anterior superior temporal gyrus can be effective for removing the safe portion of the clot away from the dome to achieve the required cerebral relaxation and to continue microdissection around the aneurysm. 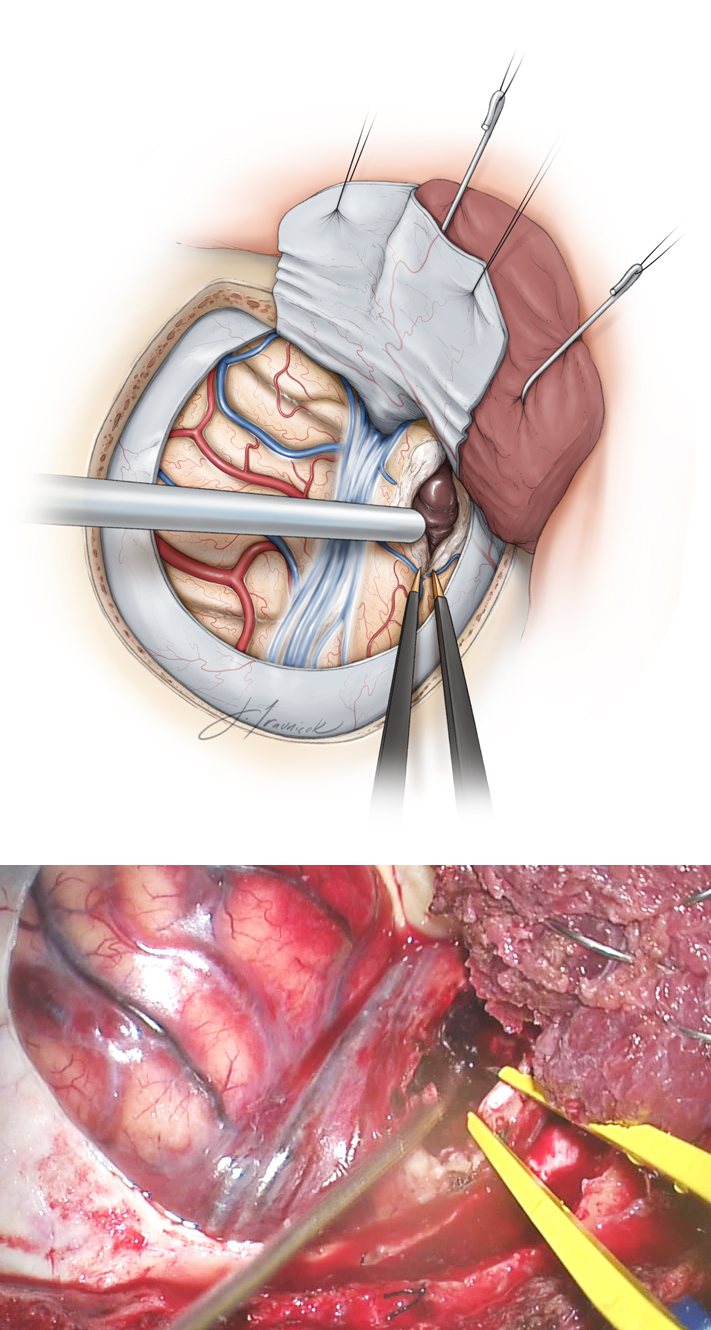 Figure 2: I made a cortical incision over the most superficial aspect of the clot, usually in the anterior 4 cm of the superior or middle temporal gyrus and partially evacuate the hematoma to relax the brain. An inferior frontal corticotomy may be necessary, depending on the location of the clot. Complete evacuation should not be attempted to prevent aneurysm rupture, given that the operator is approaching the aneurysm via its dome. I remove the inferior aspect of the clot in temporal hematomas and leave a layer of clot over the inferior surface of the fissure. 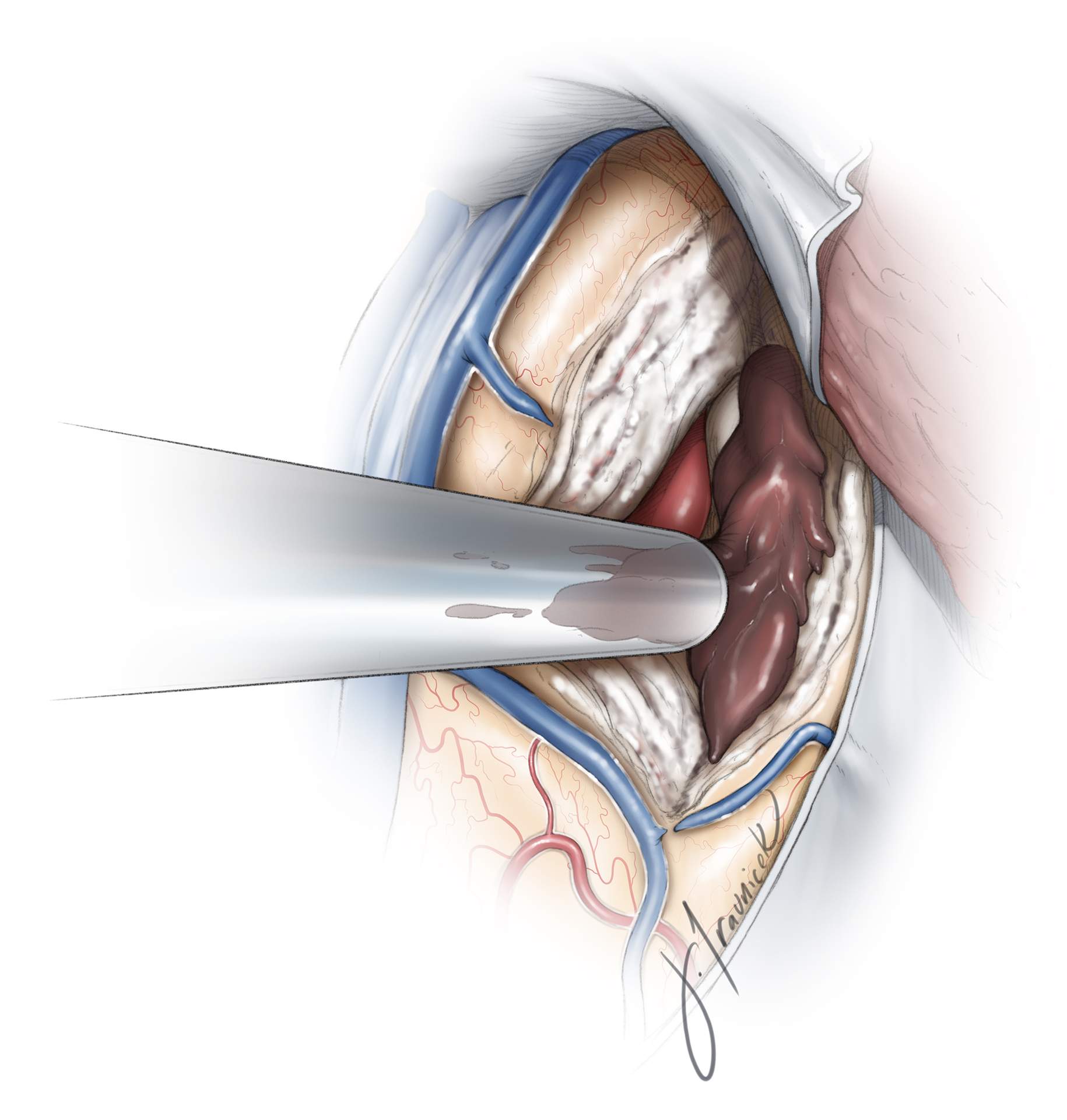 Figure 3: Upon removal of the inferior aspect of the clot, I plan to find the M1 branch through the arachnoid bands of the Sylvian fissure. The superior and lateral aspects of the clot over the sac are left intact. 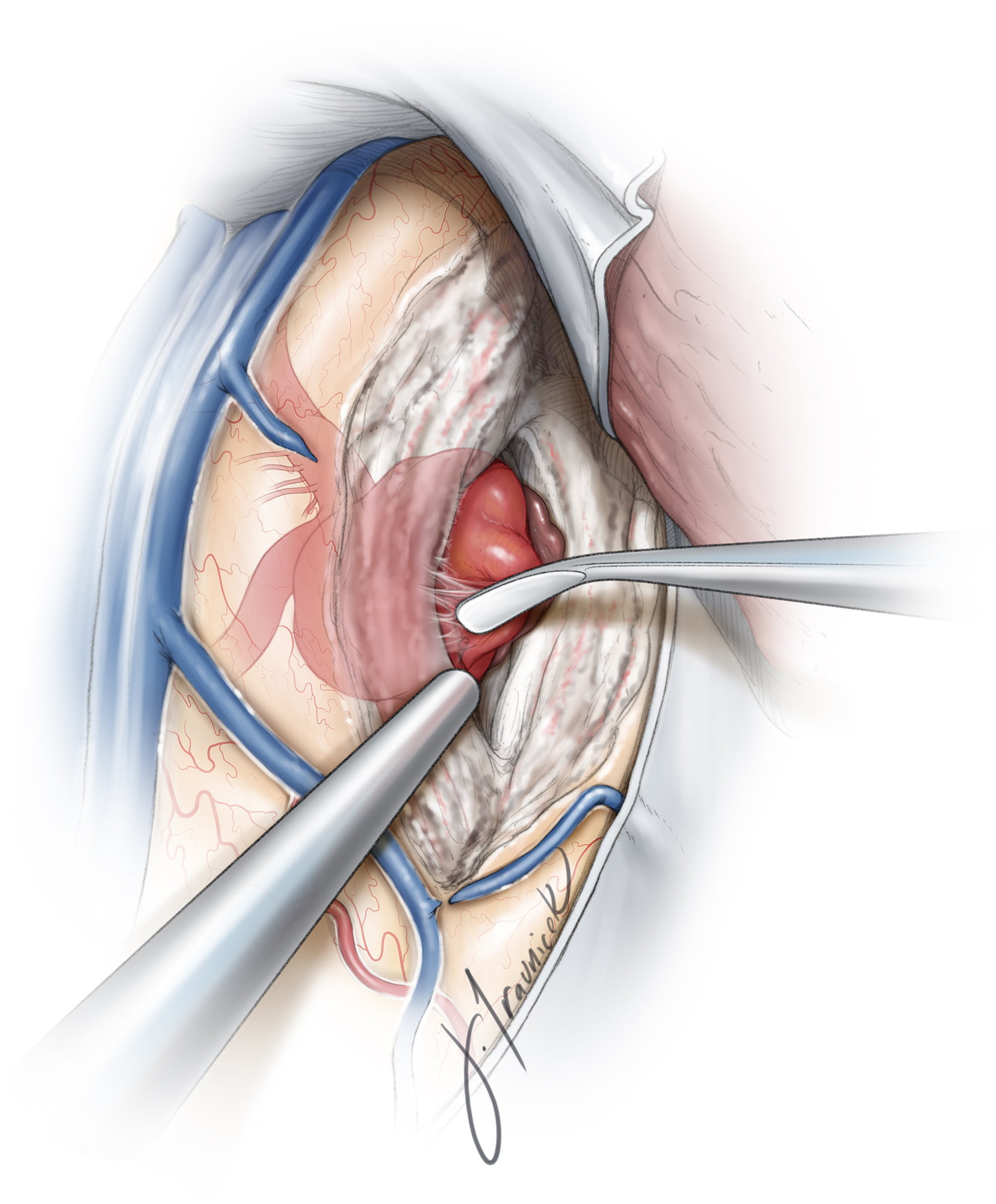 Figure 4: If the aneurysm is inadvertently encountered, the adherent small piece of clot over the ruptured site of the sac is left untouched. 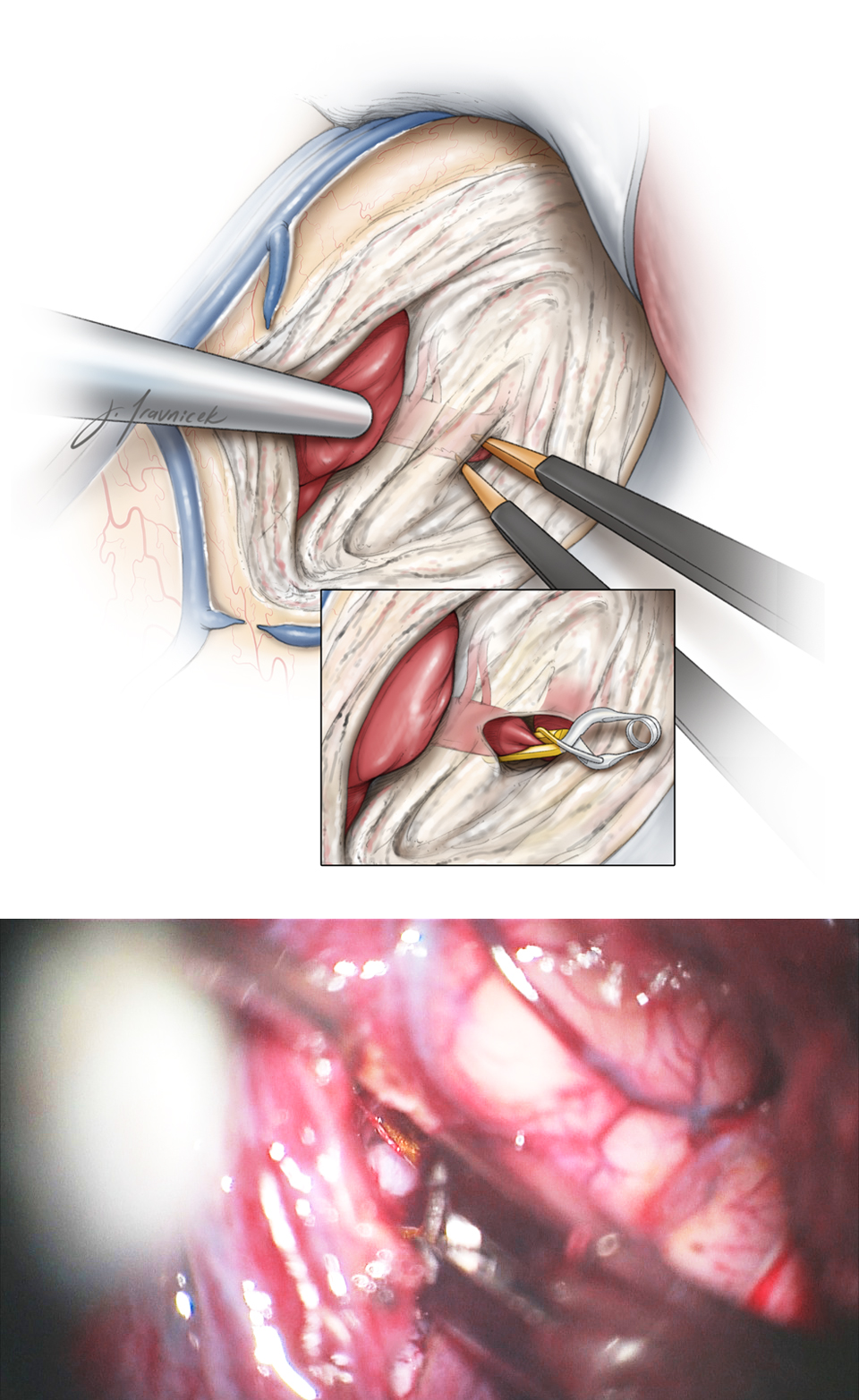 Figure 5: I remove a small section of the medial aspect of the middle temporal gyrus to find the M1 through the arachnoid layers of the Sylvian fissure. A temporary clip secures proximal control (inset and lower intraoperative photo).

Next, I pursue microdissection in standard fashion from proximal to distal along the inferior aspect of the M1 to find its bifurcation. If dissection of the M2 trunks is not methodically performed in the proximal-to-distal trajectory and the pathoanatomy of the M2’s relative to the neck is not well understood, it is easy to wander in the fissure and inadvertently land on the aneurysm sac.

The temporal M2 trunk is more readily noticeable through this more inferior working angle, and the frontal M2 is more hidden behind the aneurysm neck. Temporary M1 occlusion can assist with mobilization of the aneurysm and isolation of the frontal trunk away from the neck to ensure adequate pathway for the clip blades.

The dissection continues along the more readily identifiable anatomy, the proximal temporal M2, toward the neck and onto the proximal frontal M2. Post-bifurcation lenticulostriate arteries are identified and preserved. Aggressive forceful manipulation of the sac without temporary M1 occlusion can easily lead to premature rupture.

I avoid using any fixed retractor blades during this entire dissection process because the blades often limit my working angles and lead to cortical injury. I may use a fixed retractor blade as my “third hand” during the very final fine adjustments of the permanent clip while I use the suction device to manipulate the aneurysm neck and dome in the clip blades. Early in the dissection process, I avoid any significant retraction on the aneurysm-bearing lobe (most often the temporal lobe) in order to prevent an inadvertent rupture.

With the M1 and both M2s exposed, the next step is dissection of the proximal and distal aneurysm neck. Temporary clipping of distal M1 is beneficial for softening the aneurysm during difficult and risky dissection maneuvers and is particularly helpful for isolating branching and perforating arteries that are adherent to the dome. In elderly patients and those with atherosclerotic arteries, temporary clipping should be avoided or used very sparingly because of a deficient collateral support. Frequent reperfusion maneuvers are necessary.

The aneurysm neck must be fully circumdissected free of its adhesions and the dome mobilized from the surrounding parenchyma so that the superior aspect of the neck can be inspected. This technique will prevent inclusion of the perforating vessels into the permanent clip blades.

The surgeon must be vigilant with the dissection, remain patient, and not proceed with premature permanent clip deployment until the lenticulostriate vessels, anterior temporal artery, and both M2 trunks are completely dissected free and the local anatomy is thoroughly understood. It is easy to overlook one of the M2s—especially the frontal or third M2 trunk, which is often hidden behind the aneurysm.

The simplest clipping strategy, a straight or curved clip, is often the best. Clipping should be performed under temporary proximal circulatory “low-flow” situations after a complete dissection of the neck as well as proximal and distal vessels have been performed.

The clip blades are usually parallel to the plane of the M2 trunks and perpendicular to the M1. If the dome has been mobilized well, it can be easily manipulated into a straight clip. 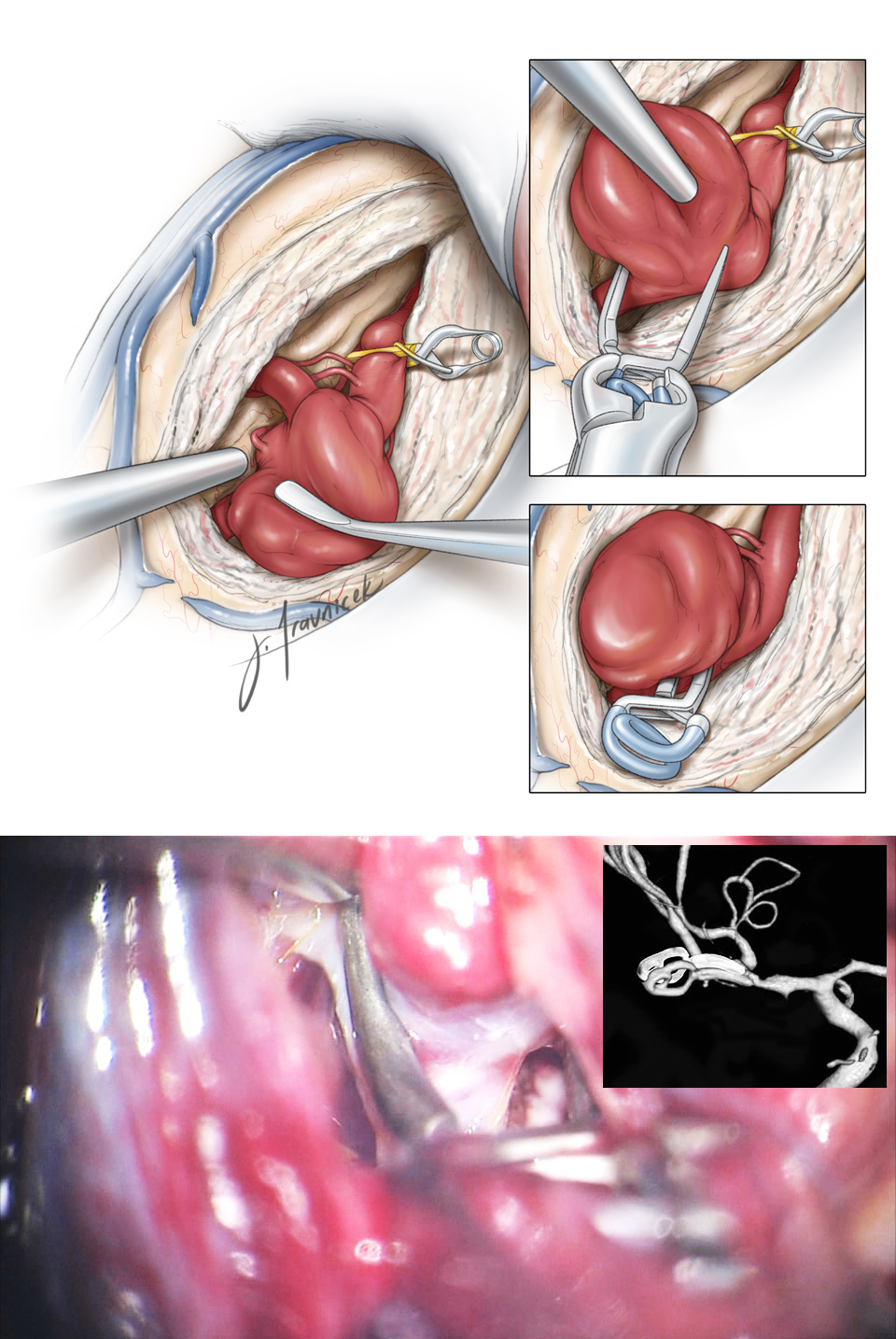 Figure 6: Circumdissection from distal M1 toward proximal M2 trunks discloses the pathoanatomy of the aneurysm. Lateral lenticulostriate arteries are identified and protected. Straight or curved clips (lower intraoperative photo) are quite effective for excluding most aneurysms (inset images.)

Post-clipping microdoppler ultrasonography and fluorescence angiography should reveal the patency of desired vessels and exclusion of the aneurysm. If there is any question of diminished or retrograde flow within the trunks or perforating arteries, the clip should be adjusted. If fluorescence angiography confirms sac obliteration, I routinely penetrate the dome to confirm this finding. Falsely negative fluorescence studies are not uncommon and are partially related to inadequate emission fluorescent signal compromised by the thick wall of the sac.

If the aneurysm ruptures before proximal control is achieved, one should not hasten to remove the cortex over the clot and attempt to clip the aneurysm and, potentially, the M1 and M2 branching arteries using a single long temporary clip. Control should first be established via a large-bore suction device for localization and compression of the bleeding site using a small cottonoid patty. Hypotension is rarely helpful and increases the risk of ischemia. If uncontrollable torrential bleeding occurs, intravenous adenosine induces a brief period (30–45 seconds) of cardiac arrest and allows dissection and inspection of the rupture point.

Next, the M1 is dissected efficiently, but not impatiently. A temporary clip is then placed across the M1 trunk. I tolerate some retrograde bleeding to avoid distal ischemia caused by trapping the aneurysm. Aneurysm neck dissection is then carried forth efficiently with placement of a tentative or pilot clip. If a small tear in the neck is found, a small piece of cotton between the neck and the aneurysm will seal the defect at the neck while maintaining the patency of the parent vessel. Please see the chapter on the Management of Intraoperative Rupture for the relevant nuances of technique.

Premature Intraoperative Rupture of an MCA Aneurysm Associated with a Hematoma

Following confirmation of aneurysm exclusion, other portions of the hematoma are removed. There are usually additional fragments of clot in the posterior aspects of the original hematoma cavity that require removal.

At the end of a thorough clot evacuation, the brain should be very slack.