Glycerol rhizotomy developed as a chance finding in 1981 when Häkanson and Leksell were working to pioneer the use of stereotactic gamma radiation for trigeminal neuralgia (TN). They used a glycerol carrier to inject tantalum dust into the trigeminal cistern to localize the nerve for radiosurgery targeting using standard X-rays. They discovered that injection of the medium alone prior to radiosurgery rendered pain freedom. Since then, this technique has been widely used without much change in technique.

Glycerol rhizotomy is advantageous in that the patient does not need to be awake for the procedure and there is no need for sophisticated equipment such as a radiofrequency generator. The technique is based on anatomic rather than physiologic landmarks.

Precise anatomic localization can be achieved using cisternography. In addition, glycerol rhizotomy often causes less facial sensory loss when compared with radiofrequency and balloon compression lesioning, hence it carries a lower risk of deafferentation pain. Immediate or early pain relief is obtained in up to 90% of patients. Glycerol rhizotomy is also considered a treatment of choice for patients suffering from trigeminal neuralgia due to multiple sclerosis.

For more details on indications, limitations, and outcomes of various percutaneous procedures, please refer to the chapter on General Considerations and Indications.

Please refer to the chapter on Placement of the Needle within the Foramen Ovale for more details regarding cannulation of the foramen.

Glycerol rhizotomy can be performed with the patient under conscious sedation. Some surgeons advocate premedicating the patient with atropine to counter the vasovagal response elicited by glycerol injection or puncture of the foramen ovale.

Moreover, anterior or posterior punctures will deposit the injection within the extradural or subdural space. Therefore, confirmation of cerebrospinal fluid (CSF) flow is especially important for glycerol rhizotomy, and this requirement is often one of the limitations of this percutaneous technique. This limitation has led me to limit the use of glycerol rhizotomy to a few select patients who have failed radiofrequency lesioning or those who have generous Gasserian cisterns where the balloon cannot create a compressive lesion.

Once the needle has slightly penetrated the foramen, it is advanced incrementally (2-mm increments) until CSF flow is secured. If the needle reaches the clivus with no CSF egress, the needle is retracted and redirected medially. If CSF is not obtained after three attempts, few options are available as I do not recommend injection of glycerol without reliable access to the Gasserian cistern, even despite a potentially adequate cisternogram. The procedure may be transformed into a radiofrequency rhizotomy. 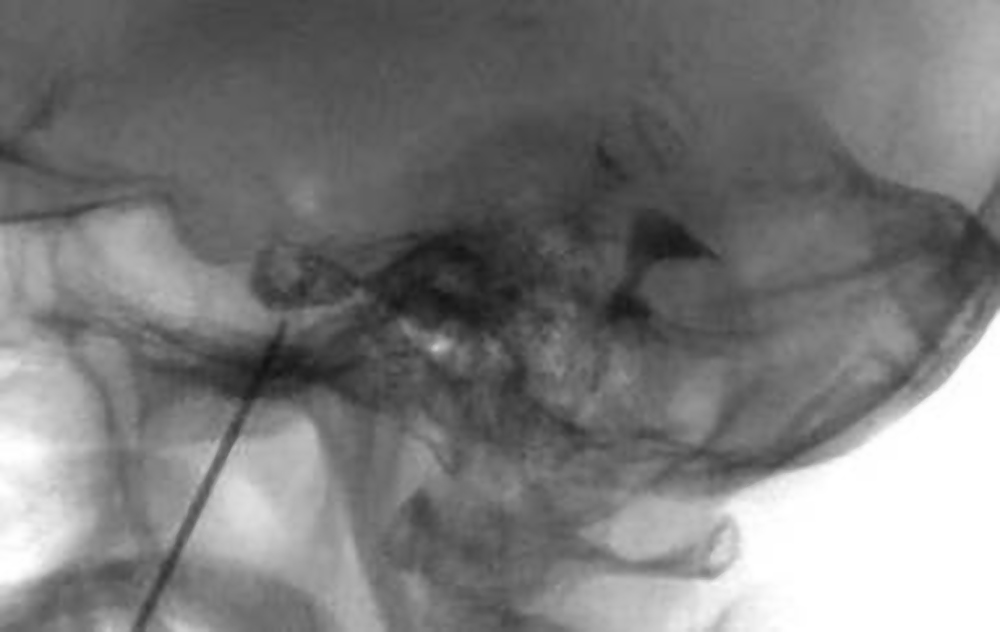 Figure 1: Once the needle location is confirmed by fluoroscopy and CSF flow has been demonstrated, metrizamide cisternography is performed with the patient in a semisitting position. The cisternogram can also assess the volume of the trigeminal cistern and estimate the appropriate amount of glycerol.

The patient is then placed in a semisitting position; this change in position may lead to needle displacement and repeat imaging is often necessary. The contrast is then injected in 0.05-mL increments under fluoroscopic guidance until contrast overflows from the trigeminal cistern. The contrast volume used ranges from 0.25 to 0.40 mL.

The contrast agent can be drained out of the cistern by placing the patient in a supine position. The sterile anhydrous glycerol is then injected into the trigeminal cistern with the patient in a sitting position (0.2-0.6 mL, average 0.4 mL).

Some patients may experience periorbital pain and flushing during glycerol injection. They should be maintained in a sitting or semisitting position for 2 hours after the procedure to avoid escape of glycerol into the posterior fossa. They can be observed as inpatients for 24 hours or discharged home the same day.