Occipital Craniotomy and Resection of a Peritorcular/Parafalcine Meningioma

An occipital craniotomy is commonly used for both intra- and extraaxial lesions of the region, including neoplasms such as metastases, gliomas, and tentorial meningiomas, and vascular lesions such as arteriovenous and cavernous malformations.

Computed tomography (CT) or more commonly magnetic resonance imaging (MRI) is performed routinely for all patients who harbor intra- or extraaxial lesions of the occipital lobe and the tentorium. CT is particularly useful for tumors that have osseous compromise.

Functional MR imaging is an option for patients affected by intraparenchymal lesions with preserved visual function. Another determining factor when choosing the approach is the status of the venous sinuses. Because of its noninvasive nature, MR venogram has been increasingly used to investigate the patency of the venous sinuses and assess the size, dominance, and collateralization of the transverse sinuses.

Digital subtraction angiography is rarely necessary. Preoperative tumor embolization may help minimize blood loss; however, I have hardly ever used this method for meningiomas because the craniotomy allows tumor devascularization early in surgery along the tentorium and falx.

If the tumor partially infiltrates the lumen of the venous sinus, a preoperative cardiac diagnostic workup is necessary to assess the risk of a paradoxical air embolism. A transesophageal echocardiogram and transthoracic Doppler may be used during the procedure, and the operator should have a low threshold of suspicion for air embolism. Finally, patients should be referred to a neuroophthalmologist for detailed visual field testing.

The surgeon may consider using cortical and subcortical mapping of the visual pathways under ”awake” or “asleep” conditions to localize the visual field cortex and optic radiations. These mapping strategies have been questioned and considered unreliable because of the lack of standardized stimulation and testing protocols, as well as possible problems with patient cooperation. Mapping has a limited clinical role because most patients already suffer from visual field defects at the time of their presentation.

The opisthocranion, which is the most prominent point of the occipital bossa, is located 3 cm inferior to the lambda and has a close correlation with the distal end of the calcarine sulcus. The medial surface is clearly demarcated by the parieto-occipital sulcus. Finally, an imaginary line extending from the junction of the calcarine and parieto-occipital sulci medially, to the preoccipital notch laterally, limits the basal surface of the occipital lobe anteriorly. The basal surface is crossed by two longitudinal sulci: the occipital-temporal and collateral sulci. The collateral sulcus is one of the most constant sulci; it projects to the temporal horn of the lateral ventricle as the collateral eminence, and to the atrium of the lateral ventricle as the collateral trigone. 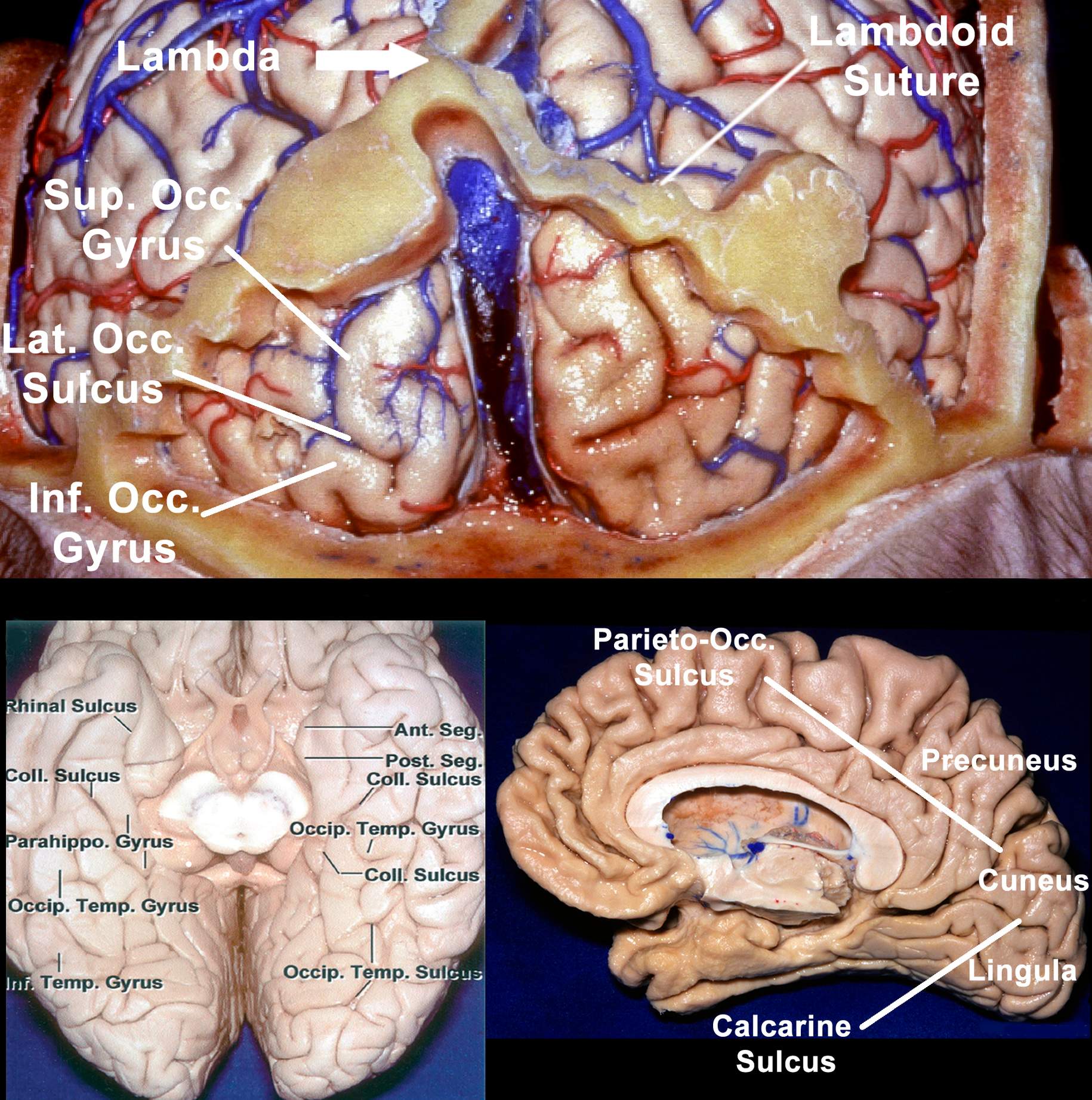 The details of the approach are described herein. 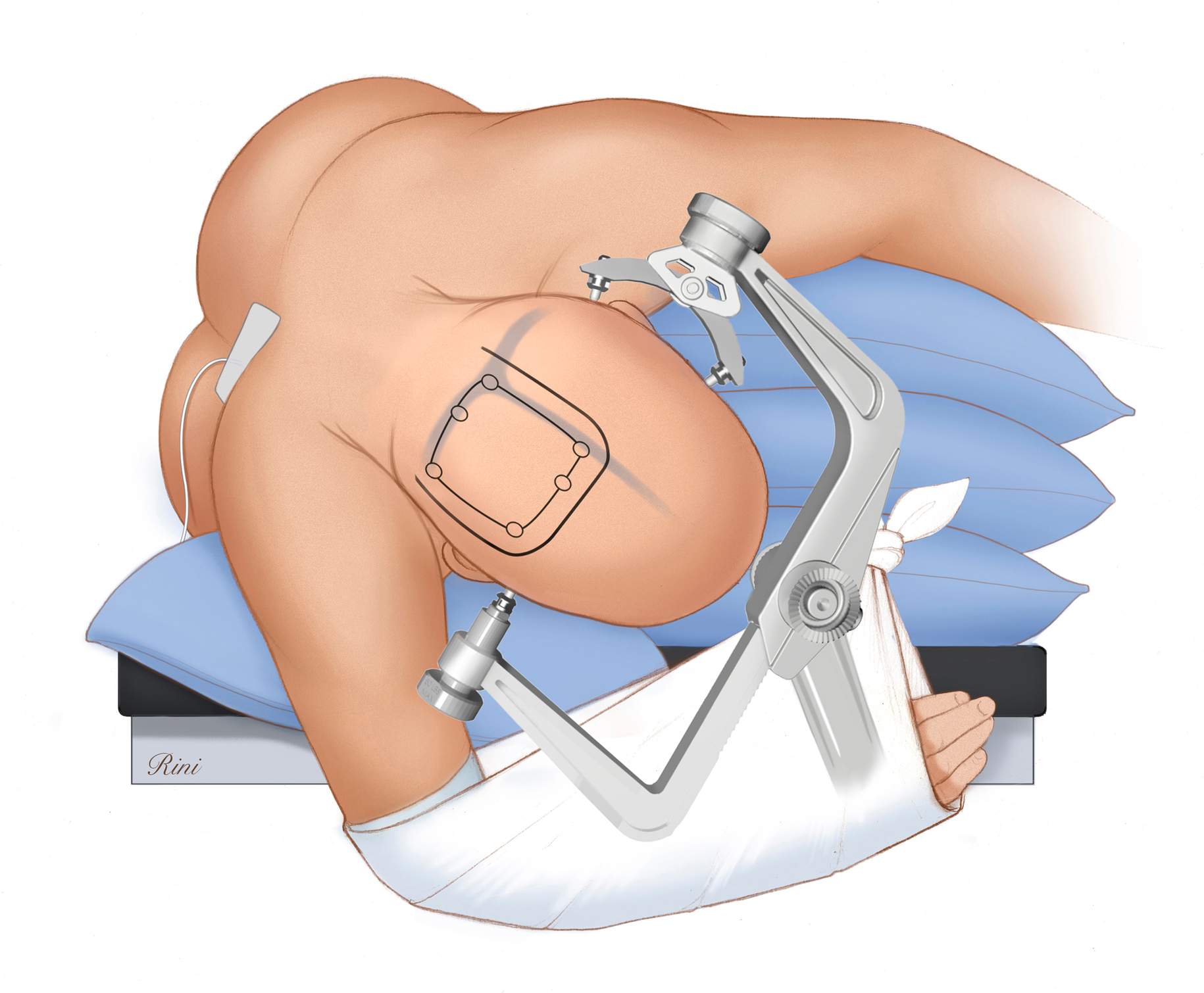 Figure 2: The patient is placed in the three-quarters prone or park bench position on the operating room table. This position precludes the need to turn the patient’s head into a nonphysiologic posture. Moreover, the lateral position allows the extra-axial lesions to remain readily accessible within the summit of the operative field. In this sketch, the lateral position allows the dependent lobe to be mobilized away from the midline using gravity retraction in expectation of an interhemispheric trajectory. The patient must be firmly secured to the table because tilting the table during surgery can risk patient displacement.

The degrees of the patient's head turn and tilt depend on the exact location of the lesion with respect to the midline and lambdoid sutures. For convexity lesions, it is advantageous to tilt the patient’s head enough to place the lesion at the highest point in the operative field. For parafalcine occipital lesions, the side of the lesion may be placed in the dependent position so that gravity retraction is utilized while tilting the patient’s head toward the floor so that the operator can achieve a more ergonomic sitting position during microsurgery.

An axillary roll supports the contralateral axilla. The patient’s ipsilateral shoulder is gently pulled anteriorly and inferiorly and secured with tape to keep it out of the operator’s working zone. 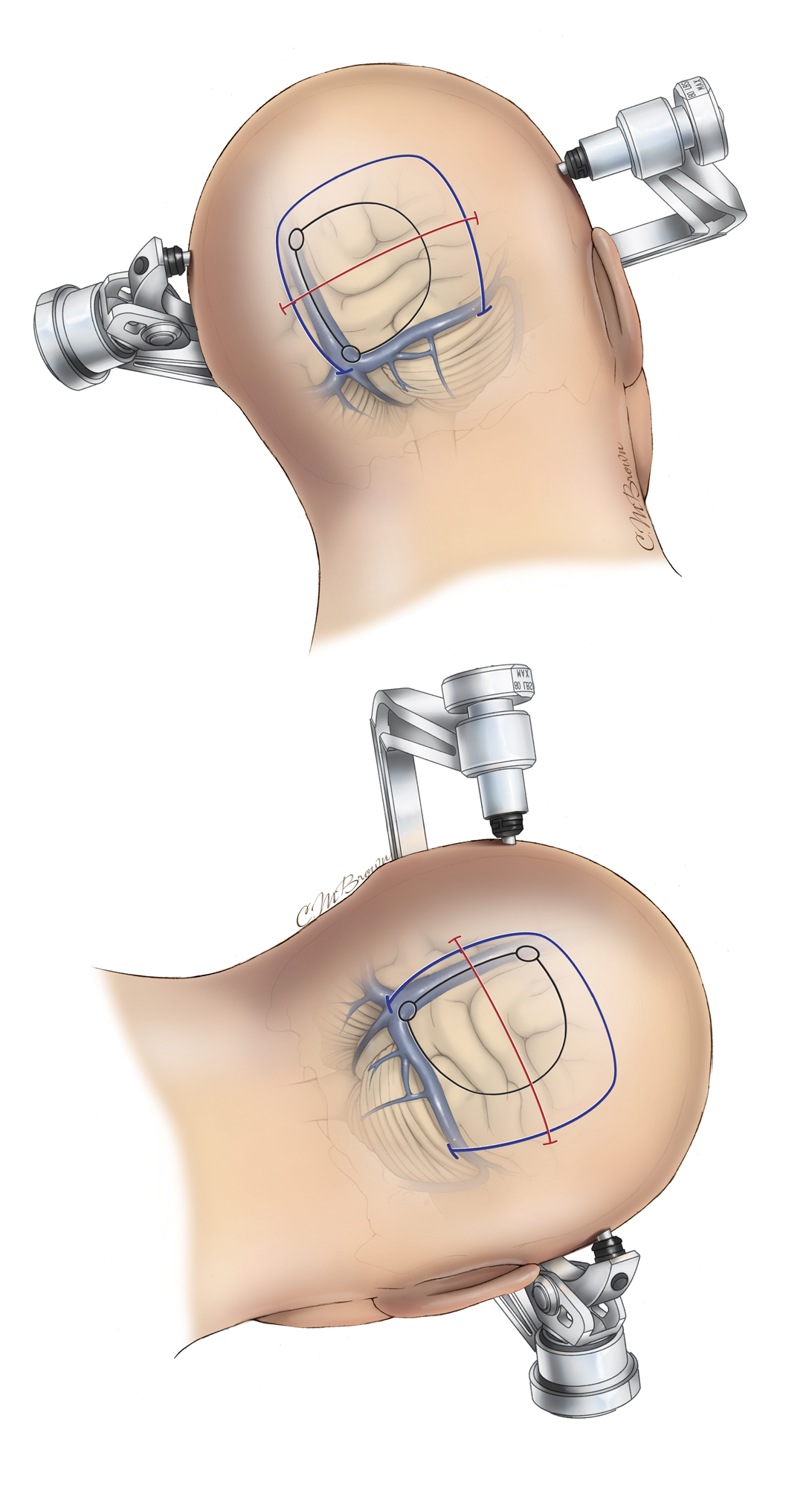 Figure 3: Various incision styles (linear and horseshoe) are marked in these illustrations. A paramedian linear transverse (red line) or longitudinal (parallel to the superior sagittal sinus, see below) incision often provides ample exposure. The horseshoe incision (blue line) is conventionally used for a large convexity meningioma or glioma (upper image). It starts at the superior nuchal line, slopes upward over the midline, and turns laterally at the lambda and descends as far as the asterion. This incision is usually reserved for large occipital lesions, for the transtentorial route to the pineal region and for reaching the tentorial surface of the cerebellum (lower image). The craniotomy is outlined (black lines). I use neuronavigation and preoperative MR venogram/angiograms to position the craniotomy. 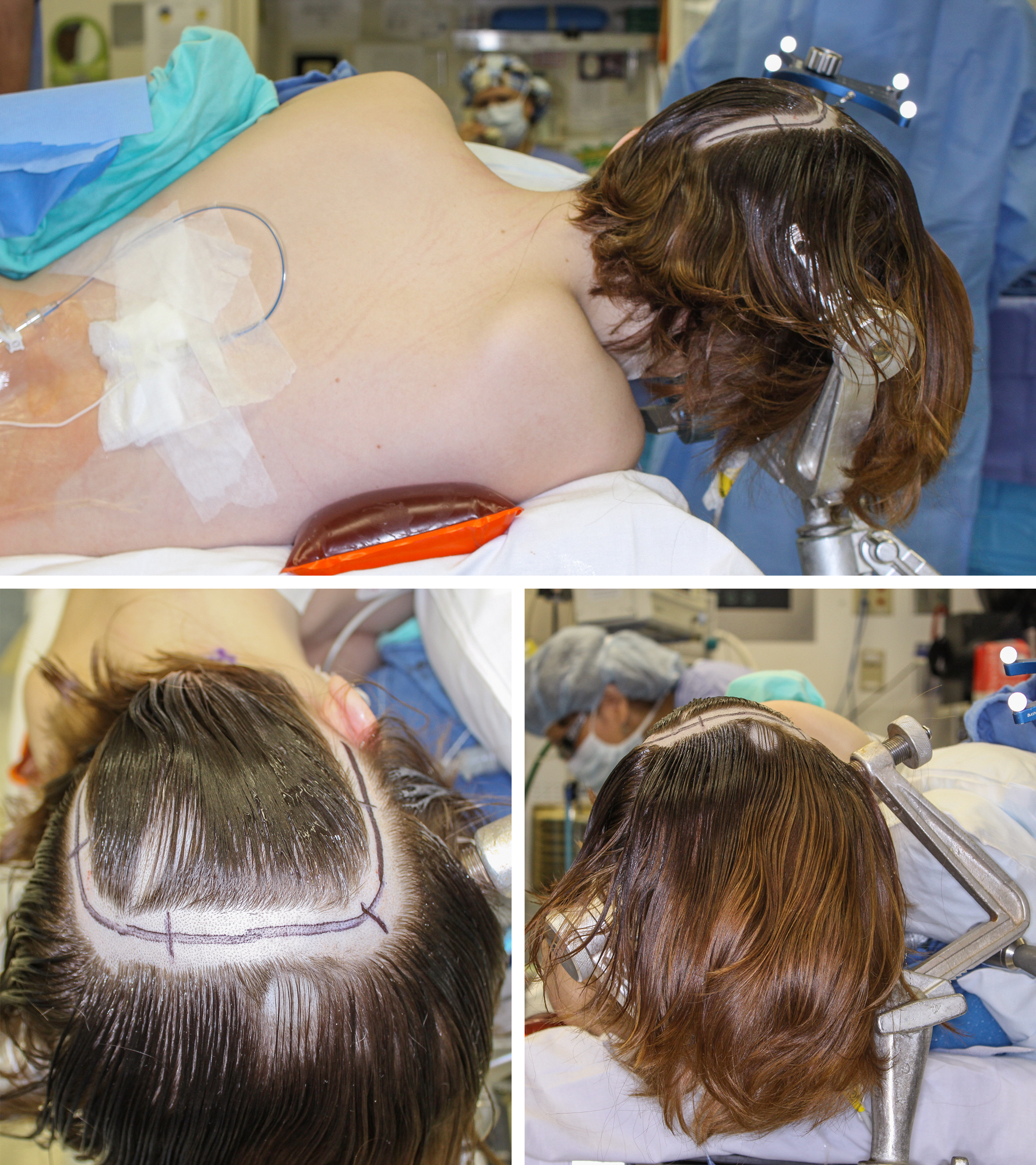 Figure 4: The conventional horseshoe incision is planned for large intraparenchymal and extra-axial lesions. The body and head position are illustrated. I have a low threshold to install a lumbar drain in order to minimize the need for brain retraction. 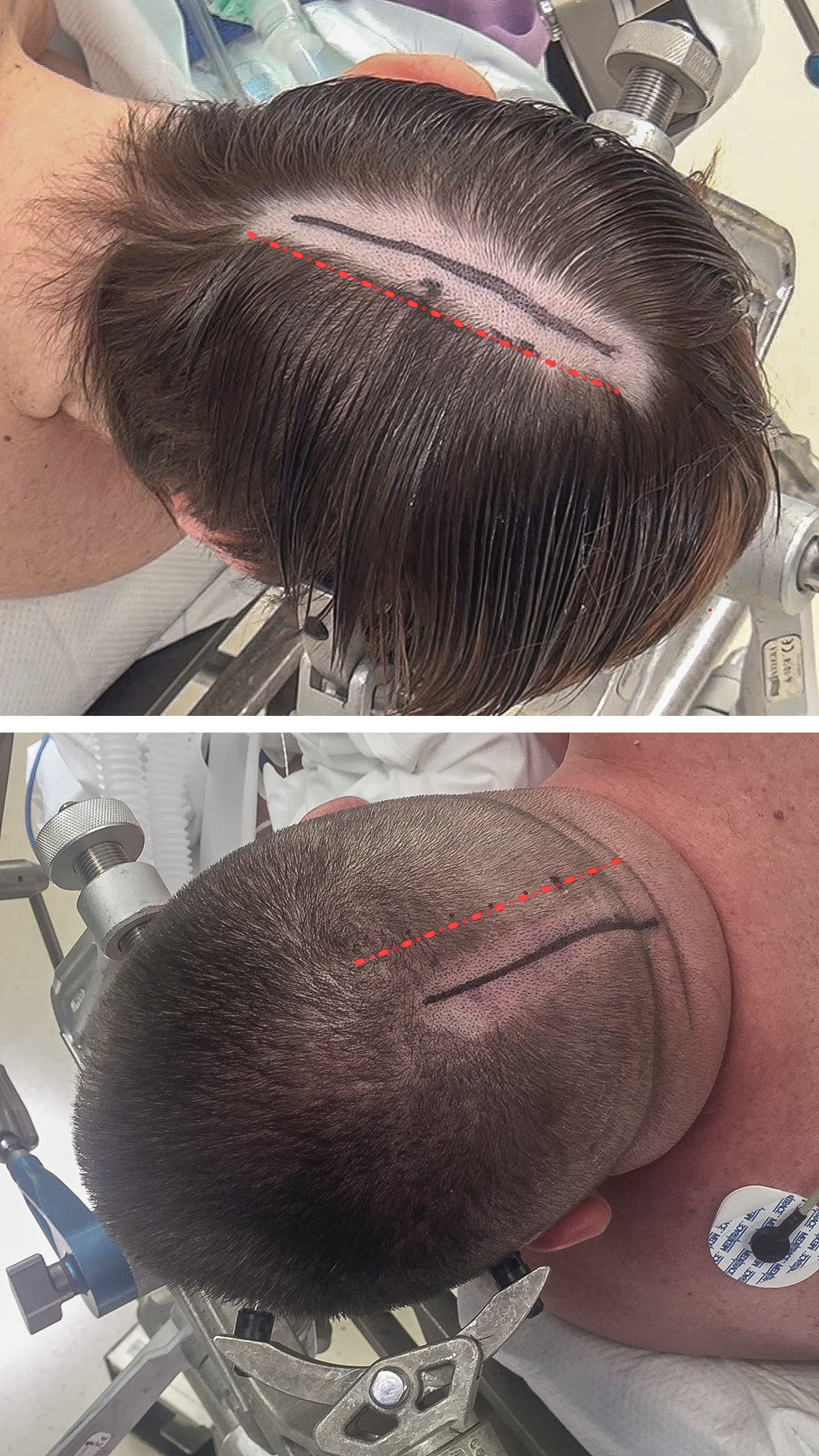 Figure 5: Paramedian vertical linear incisions for lateral occipital lobe lesions (top) and for interhemispheric or transtentorial routes (bottom) are included. The midline is illustrated as a red line.

Figure 6: For convexity lesions, one burr hole is placed over the occipital bone, according to the location of the underlying lesion as guided by neuronavigation. For paramedian/interhemispheric lesions (above sketches), I place two burr holes over the superior sagittal sinus. Identification of the sinus early in surgery helps me plan the size and location of the bone flap. I use a Penfield #3 dissector to generously dissect between the inner table of the calvarium and the wall of the superior sagittal sinus. Cerebrospinal fluid drainage through the lumbar drain mobilizes the wall of the venous sinus and the dura away from the bone, therefore preventing their injury by the footplate of the drill. If the wall of the sinus is adherent, a third burr hole should be placed; all burr holes should be relatively in continuity within the epidural space. The last bone cut should be made over the venous sinus. This maneuver allows rapid elevation of the bone flap if bleeding is encountered and injury to the sinus occurs.

Upon elevation of the bone flap, mild to moderate bleeding from the sinus wall may be controlled with thrombin-soaked gelfoam packing or Surgicel Fibrillar (Ethicon, Somerville, NJ). The latter is left in place untouched during closure. Please refer to the chapter on the Repair of Dural Venous Sinus Injury in the Principles of Cranial Surgery Volume for further details regarding managing sinus injuries.

Figure 7: For convexity or intraparenchymal lesions, the dura is opened in a cruciate or curvilinear fashion based on the dural venous sinus(es) (top). If I plan to reach the interhemispheric space, the dura is opened in a curvilinear fashion centered over the superior sagittal sinus (middle), whereas for the pineal region or basal occipital surface (bottom), I open the dura in a cruciate fashion centered over both the sagittal and transverse sinuses.

The operator must take care to avoid injuring the large draining veins, which at the occipital lobe are found laterally and outside the working zone of the surgeon when approaching the transverse sinus. Occasionally a small draining vein must be sacrificed. Most of the area exposed is devoid of bridging veins. 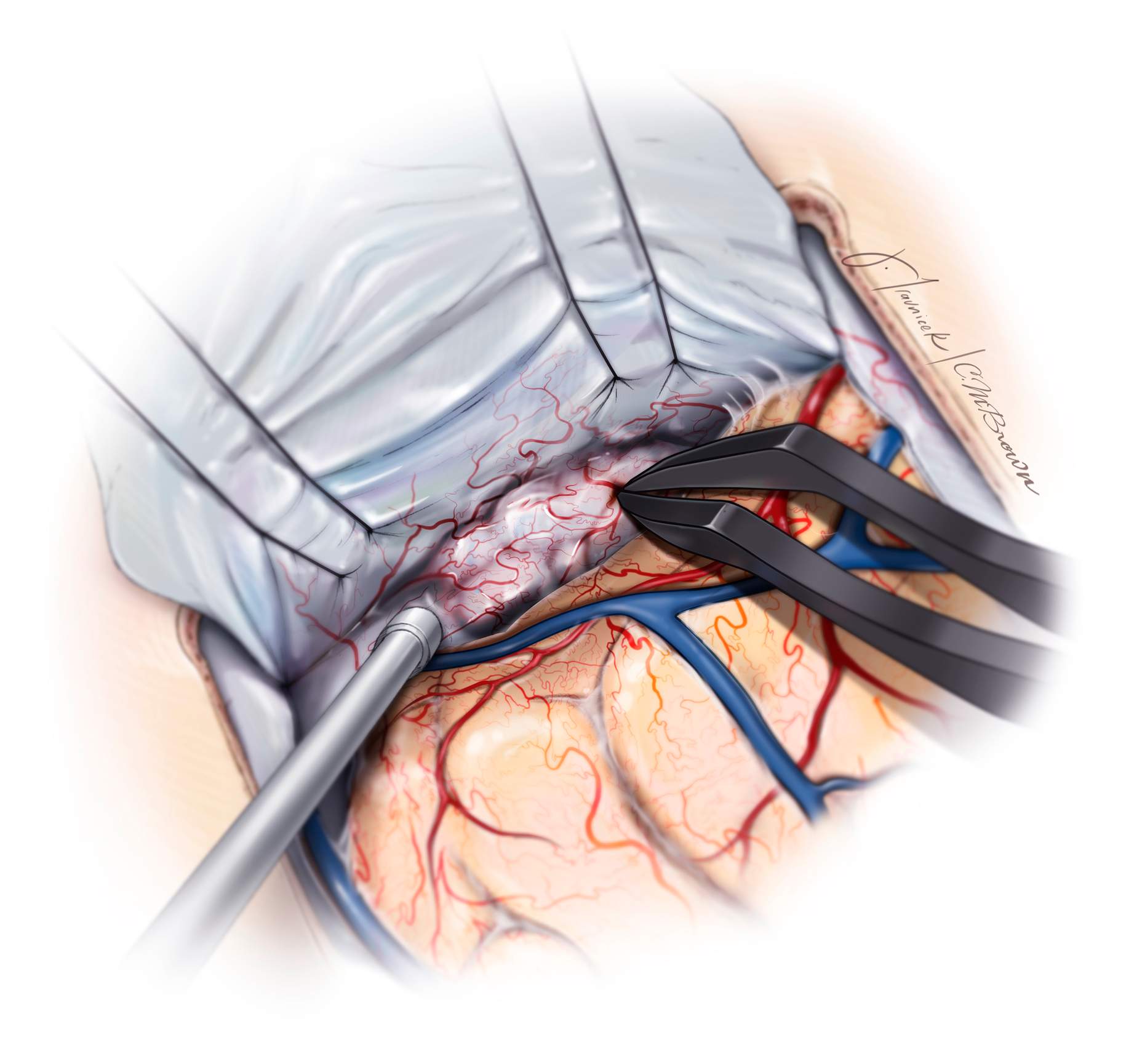 Figure 8: The interhemispheric space is mostly devoid of parasagittal bridging veins at this level and may be easily entered. I place retraction sutures within the superior falx and gently mobilize and rotate the superior sagittal sinus, thereby expanding the operative corridor and working angles within the interhemispheric space. To reach the infraoccipital space, the basal occipital surface is carefully checked for the presence of bridging veins on the way to the tentorium and tentorial sinuses. I prefer dynamic retraction, especially for the interhemispheric occipital route because inappropriate retraction can lead to visual field deficits. Cerebrospinal fluid lumbar drainage affords early mobilization of the hemisphere away from the midline and falx.

Once the pathology is handled, hemostasis is achieved and the surgeon’s attention turns to closure. If the ventricle was entered, a ventricular drainage catheter may be placed to clear debris within the ventricles during the immediate postoperative period.

I do not routinely close the dura in a watertight fashion for supratentorial craniotomies. I avoid using allograft dural substitutes because of their risk of aseptic inflammation or infection. A subgaleal drain is not implanted and the scalp is closed in the standard fashion. The skin edges are carefully approximated and not strangulated using absorbable sutures.

The patient is observed in the intensive care unit for 1 to 2 days and then transferred to the ward.