Resection of a Giant Temporo-Parietal AVM

Arteriovenous malformations (AVMs) pose a significant surgical challenge, and this challenge is accentuated when they are large. Although the distinction is subjective, the size of an AVM can augment the decision-making process regarding their appropriate management. A “giant” AVM is defined by microneurosurgeons as an AVM larger than 6 cm. Radiosurgeons often refer to giant AVM as those larger than either 5 cm or 40 cc. However, the implications of this distinction are universal in the sense that giant AVMs are more difficult to treat.

Giant cerebral AVMs are a rarely encountered subset of intracranial cerebrovascular disease, with an overall incidence of approximately 6% of all intracranial AVMs. 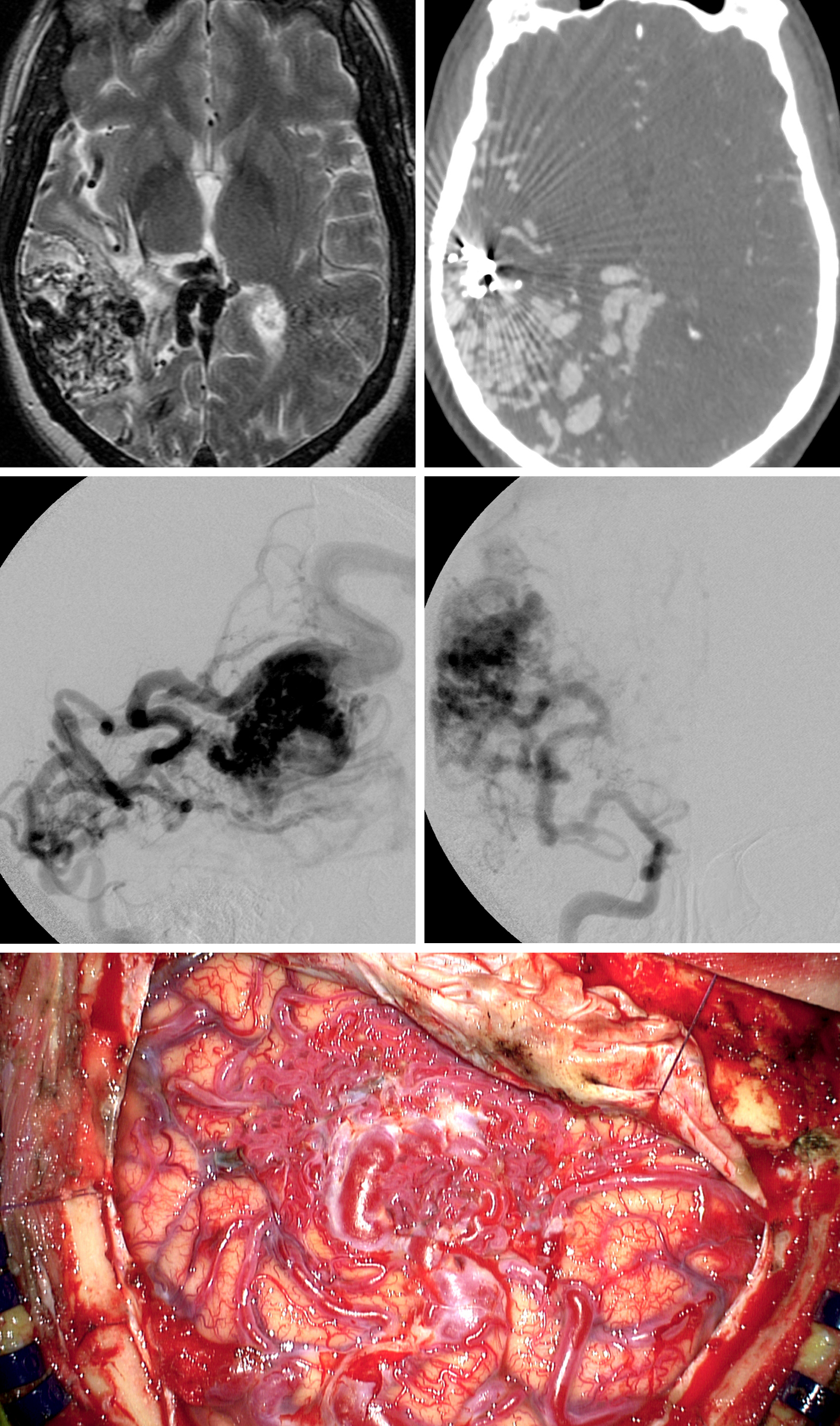 Figure 1: This giant temporo-parietal AVM did not involve the eloquent cortices and therefore underwent resection. Note the multilobar reach of the AVM and its diffuse nature. Perinidal encephalomalacia (top row left) may be a consequence of steal phenomenon.

A giant AVM is also likely to be a “high-grade AVM” because giant lesions generally involve the eloquent parenchyma and have deep venous drainage. Therefore, these lesions are nearly universally graded as either grade IV or V on the Spetzler-Martin scale. Based on the extent of these lesions, they are often considered “untreatable” since the risk of treatment outweighs the natural history of the lesion.

Giant AVMs require unique management, which I discuss in this chapter.

Giant AVMs demonstrate standard AVM-induced cerebrovascular fistulous flow dynamics to a greater extent given the significantly increased blood flow within them. There is an immensely high flow and low resistance within the AVM arteries relative to the normal pial arteries. The high flow is more likely to result in venous remodeling related to venous hypertension, as compared with smaller AVMs.

The vascular steal phenomenon, originally described by Norlen in 1949, is accentuated near giant AVMs. The decreased resistance within the AVM nidus results in high flow through this fistula and relatively decreased flow through the adjacent vessels. Therefore, the fistula may be seen as “stealing” flow from the nonpathologic cerebrovascular tree.

The principle of normal perfusion pressure breakthrough refers to postoperative cerebral edema, hyperemia, and possibly hemorrhage within the perinidal region following operative disconnection and nidal resection. Although controversial, these findings have been demonstrated after AVM surgery in a subset of patients. This phenomenon is likely to be caused by a loss of autoregulatory tone within the tunica media smooth muscle of the perinidal vasculature due to the chronic dilation that occurs within these vessels to accommodate the high-flow fistulous flow within the AVM.

The resulting loss of autoregulatory tone is problematic when the high-flow fistula is removed and a higher blood volume is diverted to these chronically dilated vessels, potentially resulting in the above listed postoperative sequelae. Given the large size of giant AVMs, this phenomenon may occur more frequently and intensively, requiring the surgeon to be alert to this sequence. The surgeon should take special measures to minimize the risk of associated serious postoperative complications.

Giant AVMs are nearly always found within the supratentorial compartment due to the anatomic and volume constraints of the posterior fossa. Given the relatively immense size of these lesions, the nidus often involves the superficial and deep extent of multiple parenchymal lobes. Similarly, venous drainage is often both superficial and deep.

The nidus of these lesions often has arterial feeders from multiple arterial territories, extending across watershed zones. The more diffuse the lesion is, the more likely it involves an eloquent region. Therefore, these lesions pose a special surgical challenge, and if surgical intervention is contemplated, careful preoperative planning must map the surgical risks appropriately.

Giant AVMs have a unique propensity to present less frequently with hemorrhage compared with smaller AVMs (1.5% vs 2-4% per year, respectively) and they are likely to cause symptoms related to mass effect or cortical irritability. The presenting features of giant AVMs, in order of decreasing frequency, include: hemorrhage, epilepsy, focal neurologic deficit, headache, bruit, and cardiac symptoms.

Congestive heart failure in infants is a feature of giant AVMs, but based on incidence, it would more likely be related to a vein of Galen malformation.

In the case of a hemorrhagic AVM, one must distinguish the source of hemorrhage as the AVM or an associated aneurysm. The accompanying aneurysms may have one of three distinctions: intranidal (within the nidus), flow associated (either proximal or distal along a feeding artery), or unrelated (incidental, not associated with AVM flow). If the aneurysm is the likely source of hemorrhage, management should be similar to that provided for an isolated ruptured saccular aneurysm. Naturally, the presence of a relatively diffuse subarachnoid hemorrhage raises suspicion for aneurysmal rupture as the blood source.

Similarly, an unruptured aneurysm should be managed as if it is incidental without an associated AVM, and with the same thresholds for intervention. Flow-related aneurysms are an exception to this paradigm because treatment of the AVM is likely to result in automatic regression of these aneurysms, therefore rendering treatment unnecessary if there is a planned intervention for AVM obliteration.

Giant AVMs are nearly universally categorized as high grade, and therefore management recommendations are often conservative, given that treatment of these lesions is associated with a high risk of complications. There is no universally applicable treatment protocol for these lesions. Indications for intervention on these lesions include progressive neurologic deficits or repetitive hemorrhages.

Intervention in a patient with a giant AVM that involves eloquent cortex has the greatest risk for adverse outcome given the extent of neurologic function at risk. 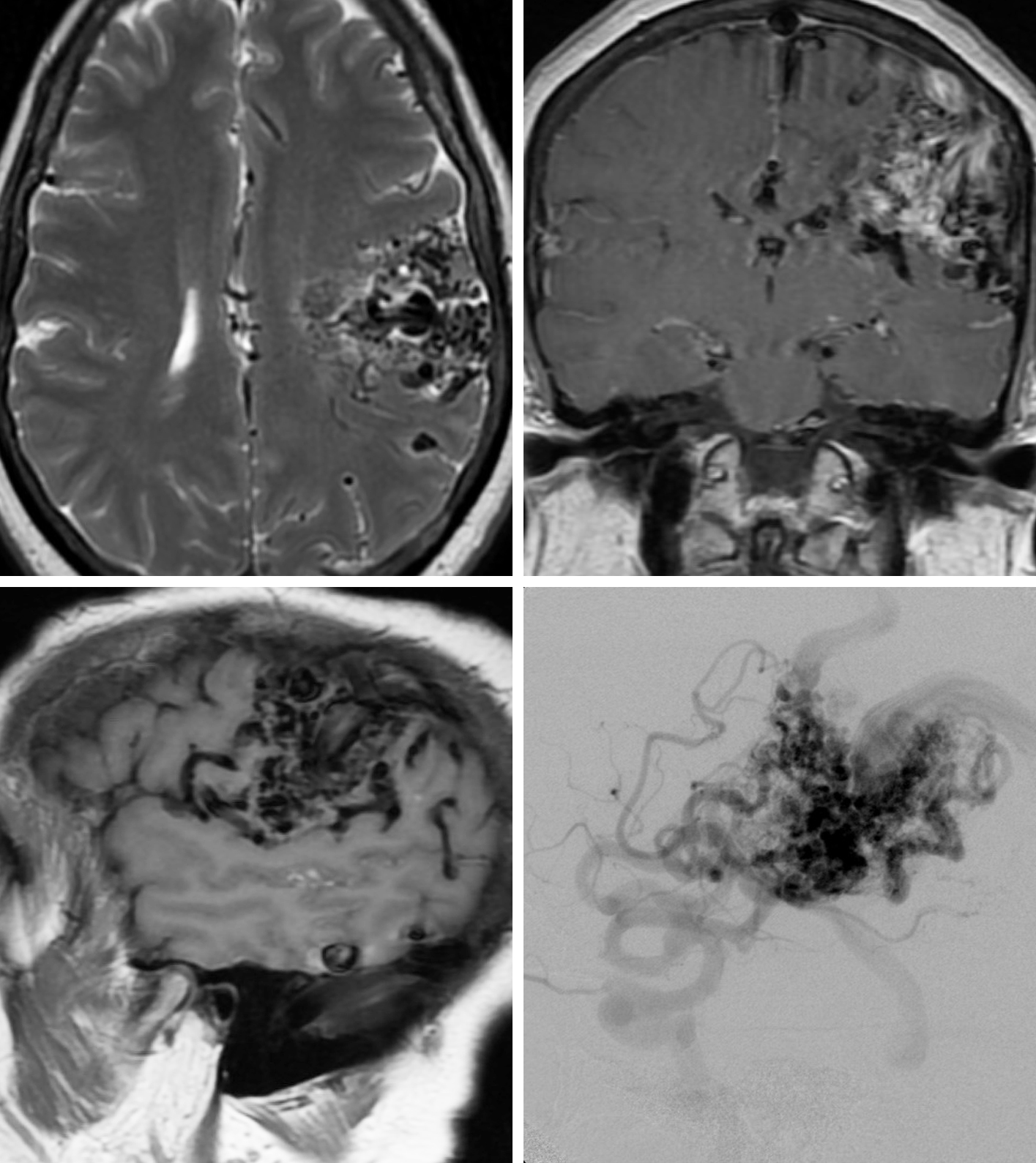 Figure 2: This giant left fronto-temporo-parietal AVM was associated with eloquent cortices and therefore observed expectantly. Partial embolization and radiation were not deemed beneficial.

The decision to intervene on a giant AVM should include treatment recommendations from a multidisciplinary team involving microsurgeons, endovascular interventionalists, and radiosurgeons or radiation oncologists.

As mentioned previously, these lesions carry a high risk (31% or 37%) of unfavorable outcome after surgery. This risk for adverse outcome is significant even when the patients are treated in highly specialized centers of excellence. This supports the evidence that these lesions are highly morbid, and intervention should be weighed cautiously against a conservative approach.

Endovascular treatment is an important adjunct for management of giant AVMs, serving as preoperative augmentation by decreasing blood flow through the nidus. This has not shown efficacy as a stand-alone therapy for giant AVMs. Unlike smaller AVMs, giant AVMs almost always respond poorly to embolization alone. Embolization may gradually decrease bloodflow within the nidus in expectation of surgery and potentially decrease the risk of postoperative normal perfusion pressure breakthrough.

Endovascular intervention does alter the cerebrovascular flow dynamics within the AVM, and this can result in complications. The intervention should preferably be performed within days of the planned surgical intervention to minimize the risk of hemorrhage from a partially embolized AVM.

Embolization has the additional benefit of recognizing the occult or deep feeding arteries, which may be either encountered late or masked within the parenchymal recess during surgery. These arteries may be targeted for embolization to facilitate surgical resection.

Embolization before radiotherapy decreases the efficacy of radiotherapy treatments. The causes of treatment failure for AVMs that have undergone radiation include hypoxia-induced angiogenesis with lower radiosensitivity and recanalization of the embolized nidus.

Embolization and radiotherapy alone demonstrate a low efficacy in treating giant AVMs; therefore, any intervention attempted should include a microsurgical approach. Microsurgical intervention is the definitive management for these lesions.

For a detailed description of the surgical strategies, refer to the chapter titled Nuances in AVM Resection.

Surgeons should be aware of the following:

Notably, if there is one or more associated feeding (not necessarily intranidal) aneurysm(s) within the surgical field and relatively accessible during the procedure, the aneurysm(s) should be addressed simultaneously.

Radiosurgical management of giant AVMs is controversial given the imprecise treatment guidelines for these lesions. Stereotactic radiosurgery (SRS) provides a feasible option for reduction in nidus volume and blood flow, particularly when part of the nidus is in an eloquent or deep location, making microsurgical intervention more feasible and favorable. This AVM downgrading phenomenon can transform some giant AVMs from inoperable to operable.

The timing of preoperative radiosurgery is critical when weighing the favorable histologic alterations imparted by SRS against the increased risk for hemorrhage during the latency period. This should be considered when multidisciplinary management is planned. Microsurgery is usually conducted 3 to 7 years after the first session of radiosurgery.

Methods proposed for treatment of giant AVMs include spatial (volume-staged) and temporal (hypofractionated) fractionation. However, both of these methods have demonstrated low efficacy in the complete obliteration of giant AVMs. Therefore, radiosurgery is not recommended as monotherapy for giant AVM treatment.

Single-session SRS has been demonstrated to be ineffective for nidal volumes larger than 3 cm, based on the necessary reduction in marginal dose. Therefore, this method is also not typically considered for giant AVMs.

Radiosurgery has a demonstrated role for management of the rare postoperative small residual AVM niduses that are resistant to embolization and have a significant risk for additional operative intervention due to their location in the eloquent cortex.

Careful hemostasis should be achieved before closure. Brain swelling is not uncommon, and if it occurs, early cessation of the operative procedure is highly advised. The surgeon should not persist in the event of a tense brain. When I encounter brain swelling, I close and return two weeks later, and have always been amazed at the ease of resection of the remainder of the nidus. I have wondered if I should routinely stage the operative session for giant AVMs, regardless of brain swelling, in order to decrease the risk of normal perfusion pressure breakthrough. Obviously, the dominant draining veins should be left intact during the first operation so that the AVM drainage is preserved.

Patients who have undergone resection of their giant AVMs are usually kept under controlled moderate arterial hypotension (systolic blood pressure less than 110 mm Hg) for a few days. They remain intubated for 24 to 48 hours after surgery. A postoperative angiogram is mandatory to confirm complete resection of the AVM. Small residual niduses may appear postoperatively despite an unremarkable intraoperative angiogram.

Norlen G. Arteriovenous aneurysms of the brain; report of ten cases of  total removal of the lesion. J Neurosurg. 1949;6:475–494.