Abscesses begin as focal areas of infected brain called cerebritis, which may result from direct spread (commonly iatrogenic or from mastoiditis, sinusitis, or meningitis) or from hematogenous spread. There are four characteristic zones of an abscess that include a cavity of central necrosis, a capsule composed of fibroblasts, reticulin and collagen, peripheral edema, and areas of extraparenchymal spread (meninges, ventricles, CSF spaces, bone, blood vessels).

There are 4 stages of brain infection between cerebritis and abscess, which are as follows:

The lesions are either located near extra-axial infection or at common sites of hematogenous spread that are usually supratentorial, usually in the anterior circulation (ACA and MCA), and usually at the grey-white matter junctions and basal ganglia.

The most distinguishing characteristics of abscesses are peripheral enhancement around a cavity of central necrosis and pus. Without further information, however, the finding of solitary or multiple ring-enhancing lesions is not specific and the differential diagnosis is broad, including neoplasms, demyelinating disorders, other infections, and subacute insult to the brain parenchyma like contusion or stroke. 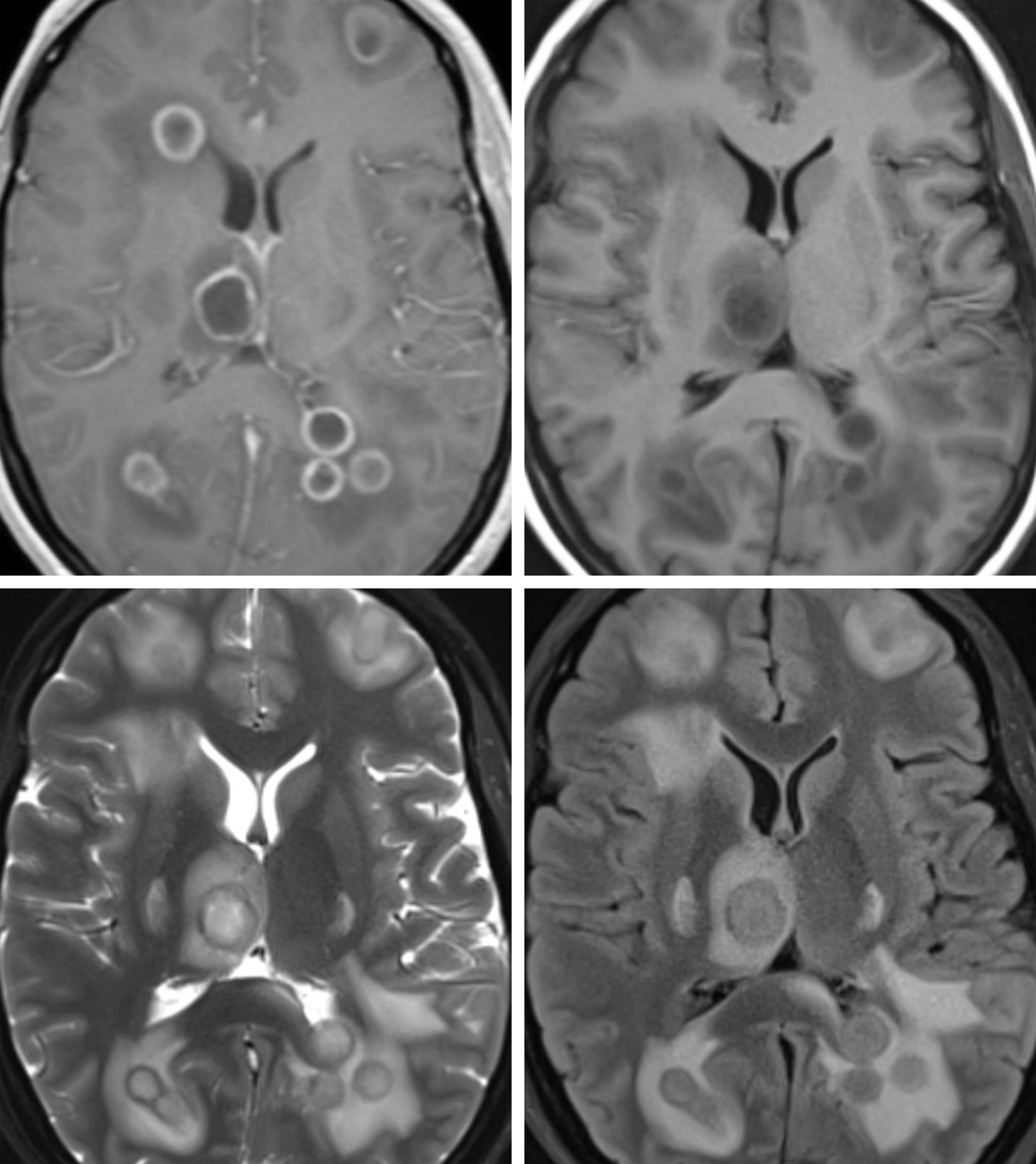 Figure 1: Post-contrast T1 weighted image (top row left) demonstrates multiple supratentorial ring-enhancing lesions with a thin capsule consistent with Early Capsule stage. Not shown here – the side of the capsule that is nearest a ventricle is often thinner, making it prone to rupture with intraventricular extension causing life-threatening ventriculitis or development of satellite abscesses. Prior to the administration of contrast, the abscesses (top row right) are less conspicuous, only visible as hypointense lesions with slightly less dark surrounding edema. The capsule itself is often mildly hyperintense. The T2-weighted image (bottom row left) from this same patient illustrates the high signal-intensity necrotic center and high-signal surrounding vasogenic edema typical of abscesses. The capsule is low signal, which is believed to be due to alteration of the local magnetic field by high concentrations of oxygen free radicals. The findings on FLAIR (bottom row right) are similar to those on T2: high signal necrotic center and surrounding vasogenic edema. Not shown here – Spread of infection into the ventricles or extra-axial CSF spaces may result in incomplete suppression of fluid signal leading to subtly abnormally increased signal of the intraventricular CSF. 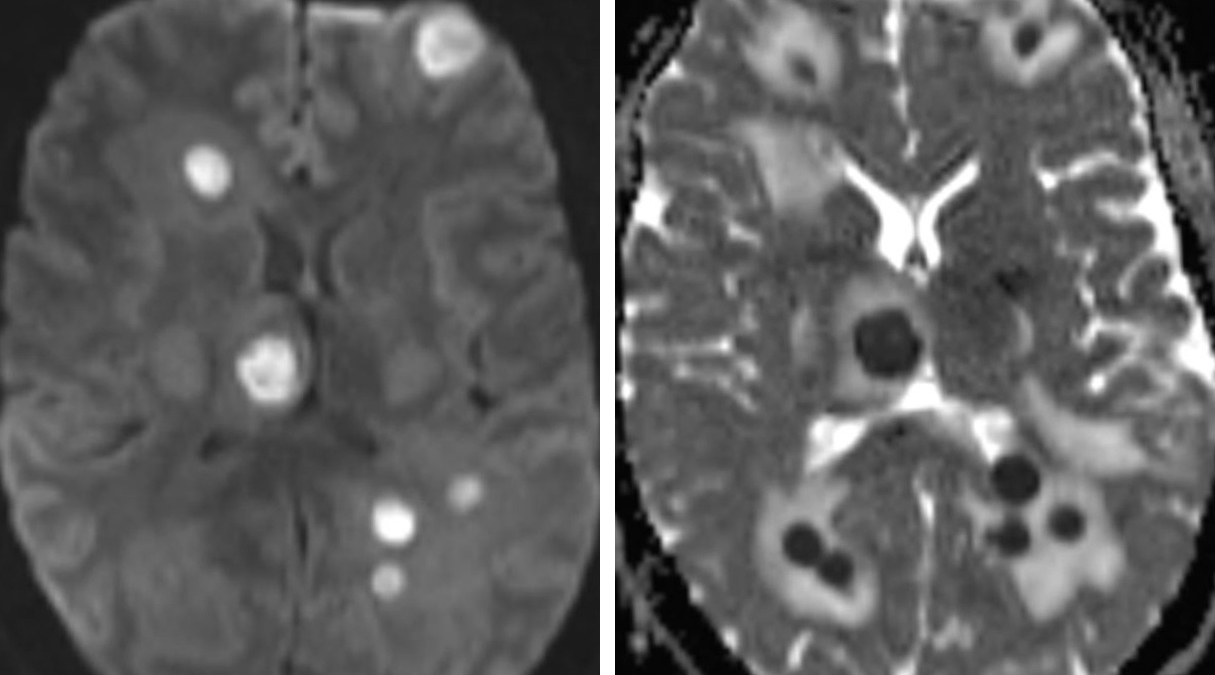 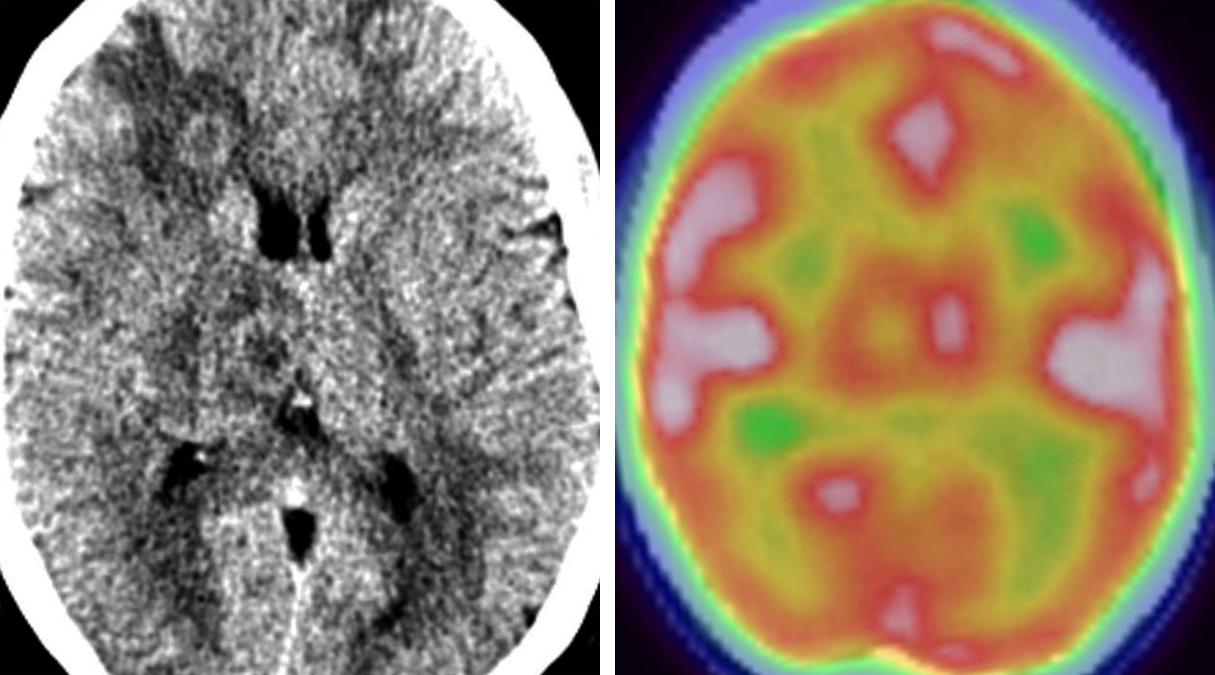 Figure 3: F-18 fluorodeoxyglucose (FDG) PET/CT with intravenous contrast: Multiple ring-enhancing lesions with perilesional low-density edema are visible on CT (top row left). On PET (top row right), only the right thalamus lesion is definitely seen, which appears as a ring of increased radiotracer uptake (coded as red/pink in this color scheme). Lesions smaller than about 7 mm may not generate adequate PET signal to be visible. 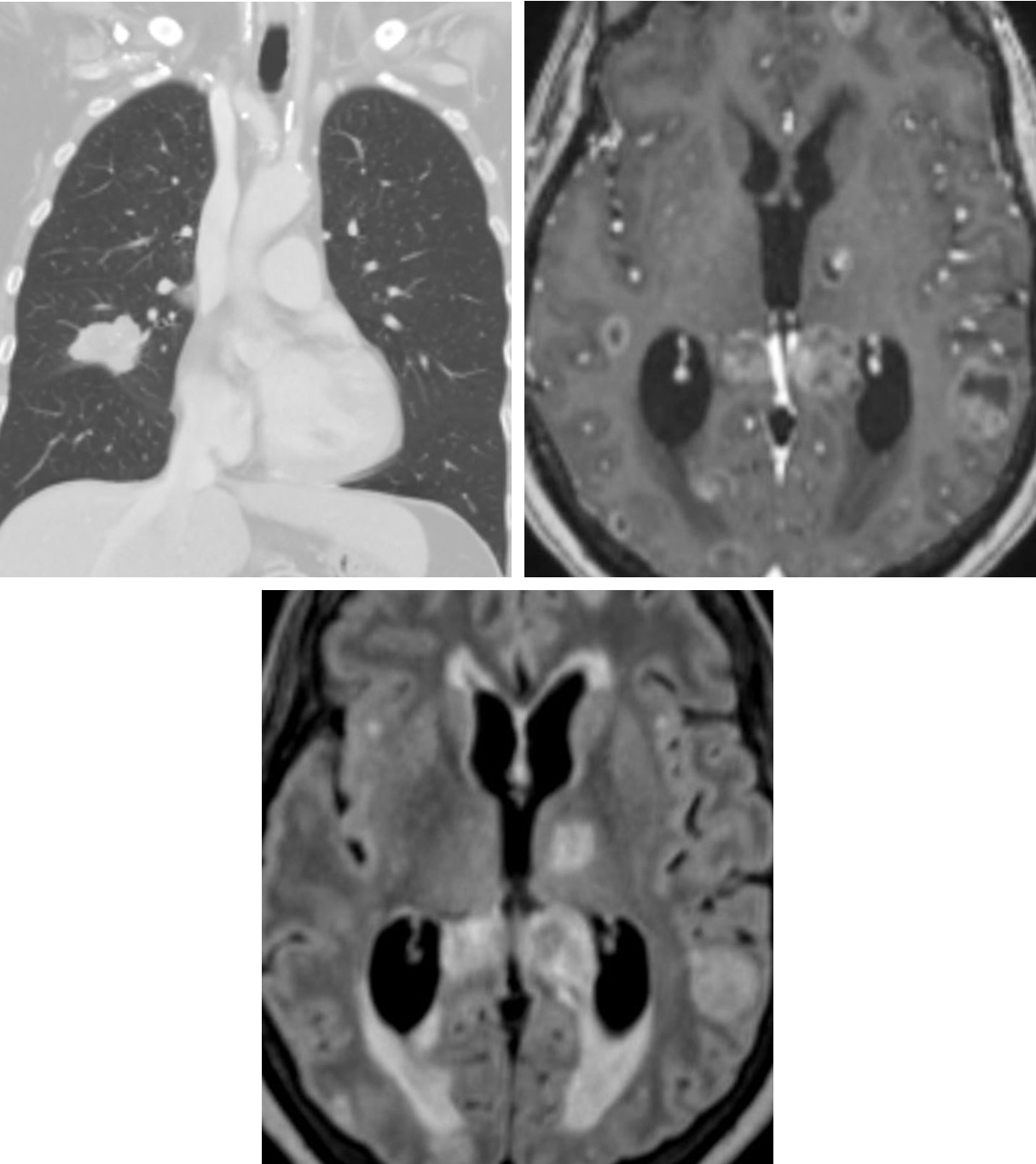 Figure 4: Metastases mimicking abscess. A poorly-differentiated lung adenocarcinoma on Chest CT (top row left) progressed to cerebral metastatic disease. Metastatic lesions often have a ring-enhancing pattern on T1 post-contrast sequence (top row right) that is very similar in appearance to abscesses. The surrounding hyperintense edema on FLAIR (bottom row) is also usually visually indistinguishable from that of abscess. Metastases usually do not have the restricted diffusion much more typical 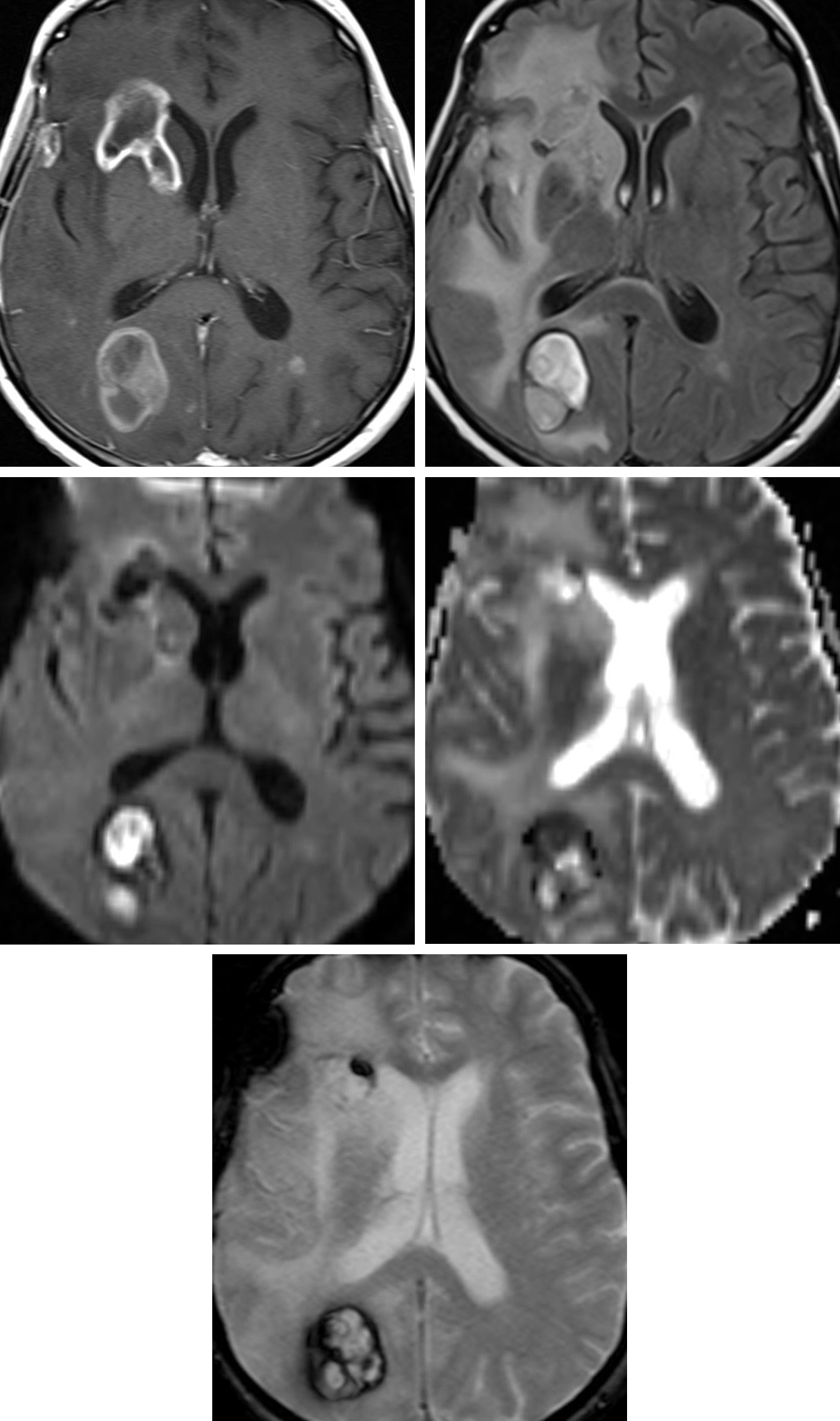 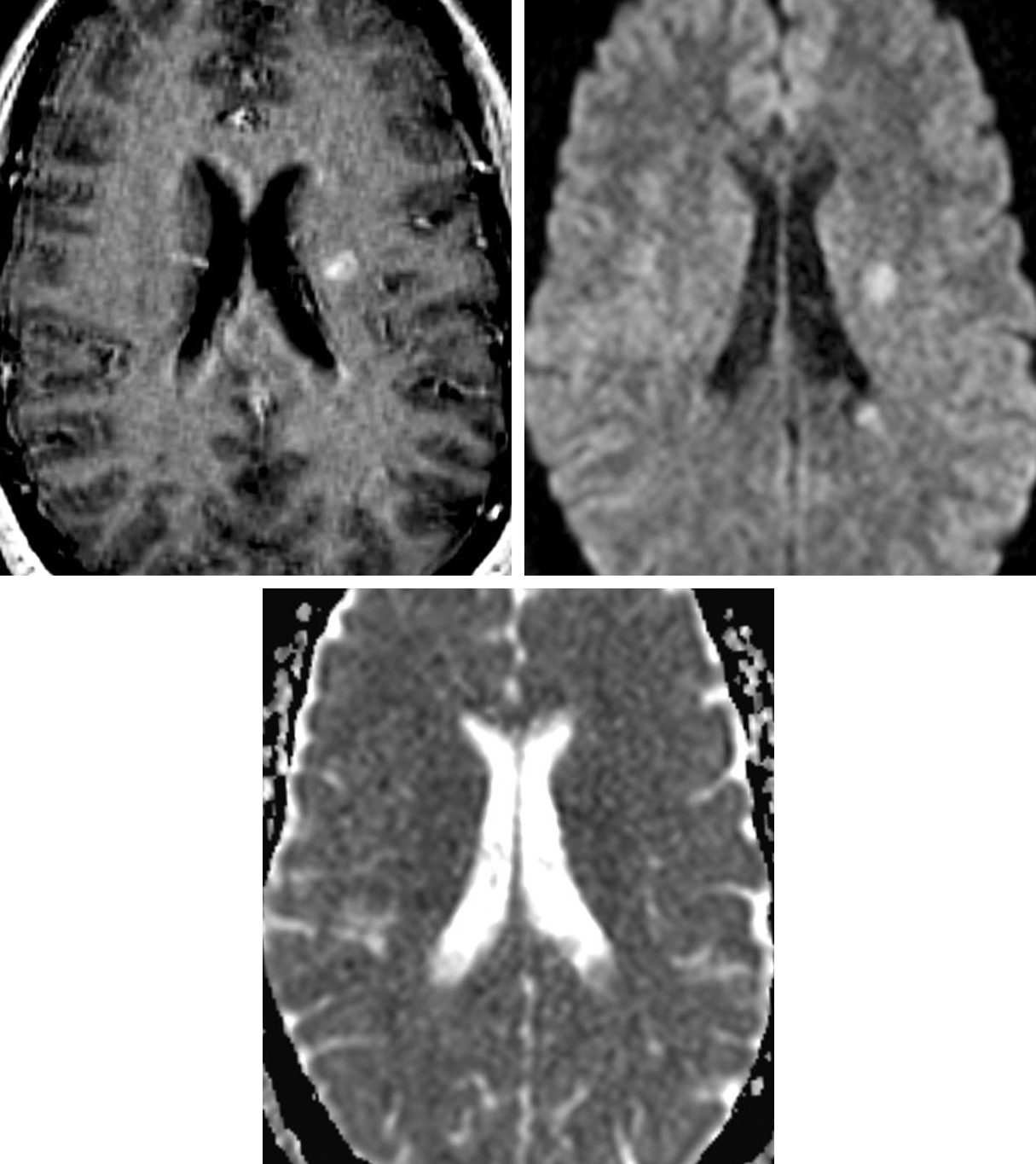 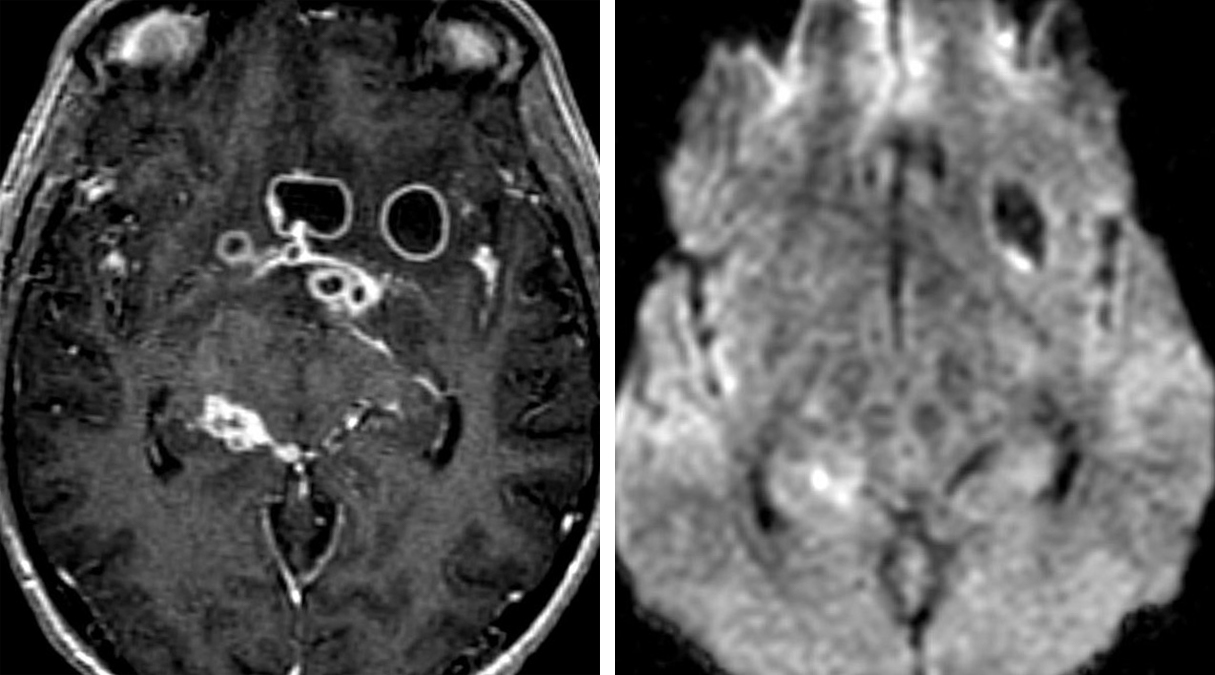 Figure 7: Tuberculous meningitis in the basal cisterns extends into the cerebral parenchyma and demonstrates a ring-enhancing pattern on T1 post-contrast image (left), but these lesions have no restricted diffusion on DWI (right) that is nearly always present in pyogenic abscesses. This is a common useful differentiating feature for atypical infections. 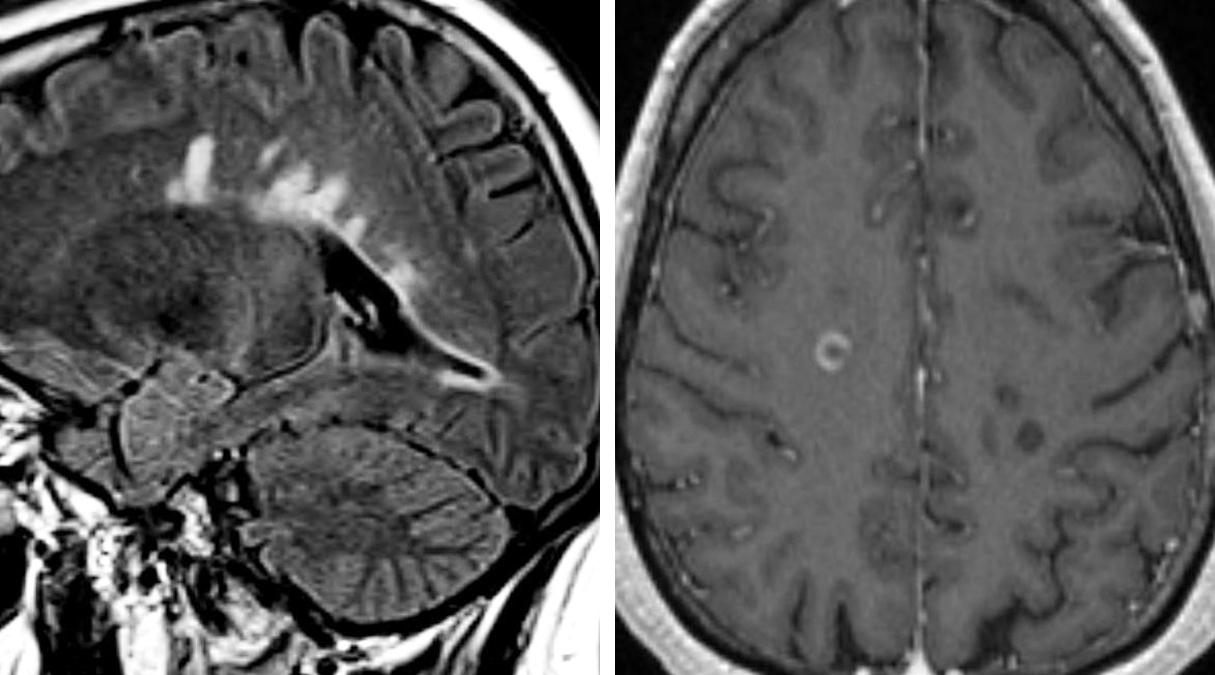 Figure 8: This patient’s distributions of FLAIR hyperintense lesions (top row left) is very typical for multiple sclerosis. One of these lesions demonstrates a rim of enhancement on T1 post-contrast image (top row right) indicating active demyelination. These lesions often demonstrate an incomplete rim of enhancement, a helpful differentiating feature from abscess. Diffusion restriction that is almost always present in abscess is nearly always absent in the center of demyelinating lesions. 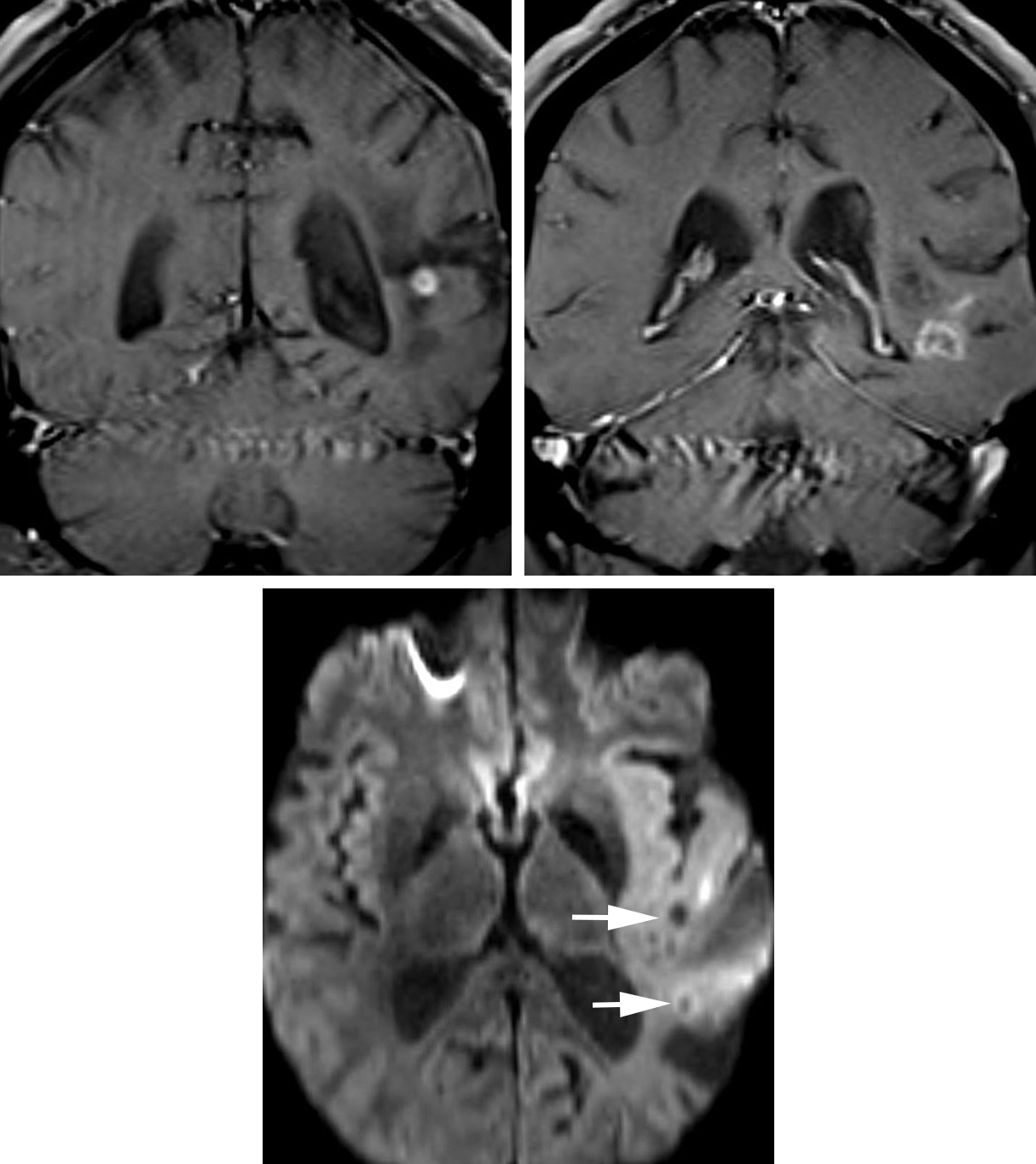