Microsurgery of deep cerebral cavernous malformations (CMs) offers unique challenges because of the eloquence of the overlying/bordering neural substance and restrictions of the narrow operative corridors. Despite these constraints, limited operative routes via the use of dynamic retraction provide the little space necessary to deal with deep CMs that are minimally hypervascular and technically easy to dissect.

Deep lesions located in the basal ganglia, thalamus, periventricular area, and ventricular system as well as the eloquent cortices and white matter tracts can be a significant source of morbidity for susceptible neural structures. The occurrence of CMs is equivalent to the distribution of neural tissue, with approximately 7% to 15% occurring within the deep structures, including the thalamus and basal ganglia.

Patient age at presentation is similar to that of other CMs, the third and fourth decades of life. Unlike more superficial and cortically based supratentorial CMs that often are associated with seizures, patients with deep cerebral CMs tend to present with an acute onset of neurologic deficits.

Thalamic CMs can present with acute motor and/or sensory symptoms, as well as headache caused by hemorrhage or hydrocephalus if the lesion explodes into the third ventricle. Hydrocephalus is the main presenting symptom in approximately 15% of patients who harbor a thalamic lesion.

Lesions in the basal ganglia tend to present with hemichorea or other basal ganglia-related syndromes. As with brainstem CMs, the rate of hemorrhage is likely similar for all CMs, although lesions in more eloquent territories become symptomatic with smaller hemorrhages, and therefore their hemorrhagic risk is overestimated.

The rate of hemorrhage reported in the literature for deep cerebral CMs ranges greatly, from 0.7% to 5% per year, because of differences in the definition of hemorrhage (clinical vs radiologic, vs clinical confirmed with imaging). In patients with a confirmed history of prior hemorrhage, the annual bleeding rate increases to 4.5% to 30%. A history of hemorrhage is the most important risk factor for occurrence of a subsequent hemorrhage. 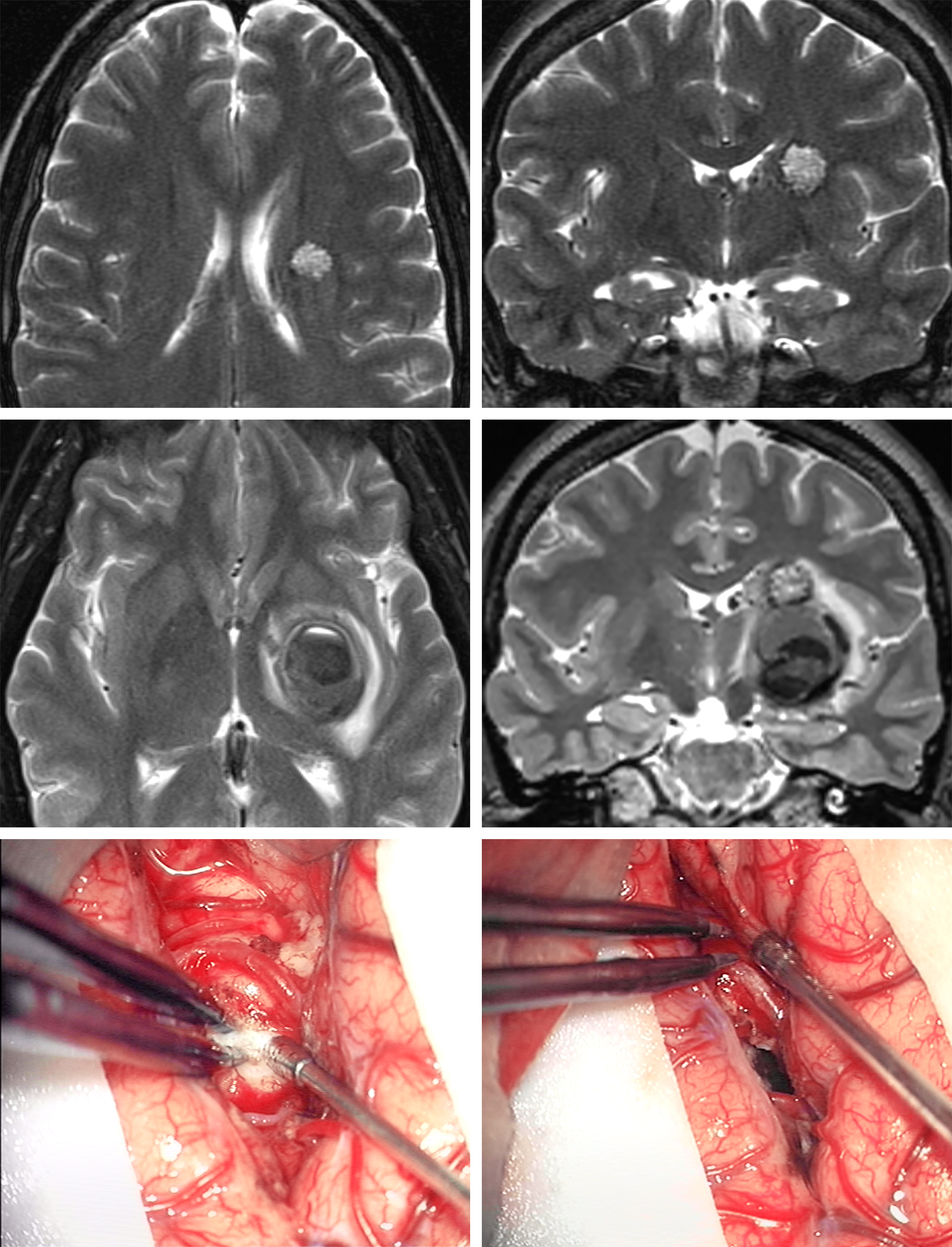 Figure 1: A young woman presented with headaches and was diagnosed with a relatively small periventricular CM without acute extracapsular hemorrhage on magnetic resonance (MR) imaging (upper photos). Because of the asymptomatic nature of the lesion, a lack of acute hemorrhage on imaging, and its deep location, the malformation was managed expectantly. She returned one year later with another hemorrhagic event that left her with a hemiparesis (middle row of images). She subsequently underwent a posterior transsylvian transinsular resection (lower row of images).

Surgical intervention should be pursued among symptomatic patients who have suffered a previous hemorrhage. Most symptomatic CMs, regardless of their location, can be excised through relatively safe microsurgical operative trajectories. The risk of an operative approach (the extent of normal brain transgression to reach the deep CMs) must be weighed against the natural history of the lesion. Two symptomatic hemorrhagic events indicate a clear indication for surgical intervention.

The timing of surgery for patients who present with a hemorrhage varies based on the surgeon’s preference. Some colleagues prefer to delay intervention up to 4 weeks to ensure neurologic recovery and lesional stabilization.

In my opinion, delay in treatment places the patient at risk of further deterioration from additional hemorrhages. Most importantly, immediate intervention allows the patient to recover from the hemorrhage and surgery at the same time. The development of a pseudocapsule, associated with delayed intervention, is not likely to pose additional technical challenges during CM resection. Organization of the hematoma has also been cited to complicate CM removal; this phenomenon is only a theoretical consideration.

During surgical planning, I consider the location and relation of the mass to the ependymal or pial surfaces. In addition, I pursue the following principles to determine the appropriate operative trajectory toward lesions within the deep and eloquent supratentorial locations:

Intraoperative navigation is very beneficial for facilitating and guiding a precise and accurate operative pathway. There are often limited anatomical landmarks at the depth of dissection for these lesions. It goes without saying that exploratory cortical and white matter dissection with the hopes of finding the lesion without a clear roadmap is fraught with complications. Navigation also facilitates more targeted and smaller craniotomies.

Associated developmental venous anomalies (DVAs) are spared because they most likely drain the normal adjacent structures, including the thalamus, hypothalamus, internal capsule, and basal ganglia.

Figure 2: The most commonly utilized operative corridors for access to deep CMs located in the periventricular areas and more specifically the peri-cingulate and peri-callosal regions are illustrated. These corridors include the interhemispheric, transcallosal and supracerebellar routes. These routes are marked with green arrows. 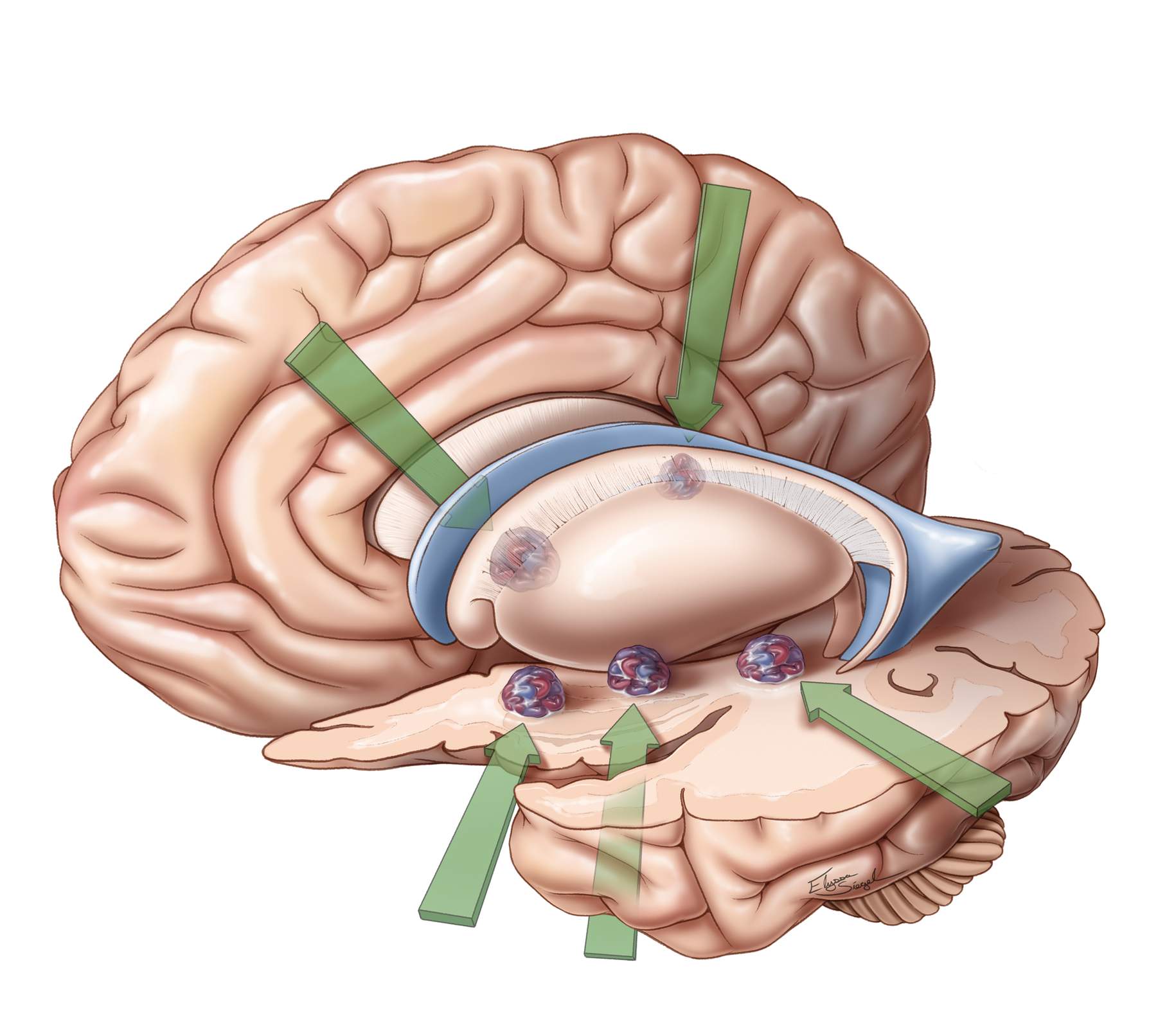 Figure 3: The CMs located in the basal ganglia are readily approached via transcallosal (both ipsi- and contralateral interhemispheric), subfrontal supracarotid, transinsular and transparietal cortical routes.

The location of the deep supratentorial CMs determines the necessary operative trajectory for their safe exposure. I will discuss the surgical routes for deep-seated CMs based on their location within and around the deep nuclei.

Lesions around the medial thalamus and hypothalamus are reached via the ipsilateral interhemispheric transcallosal expanded transforaminal transvenous approach. 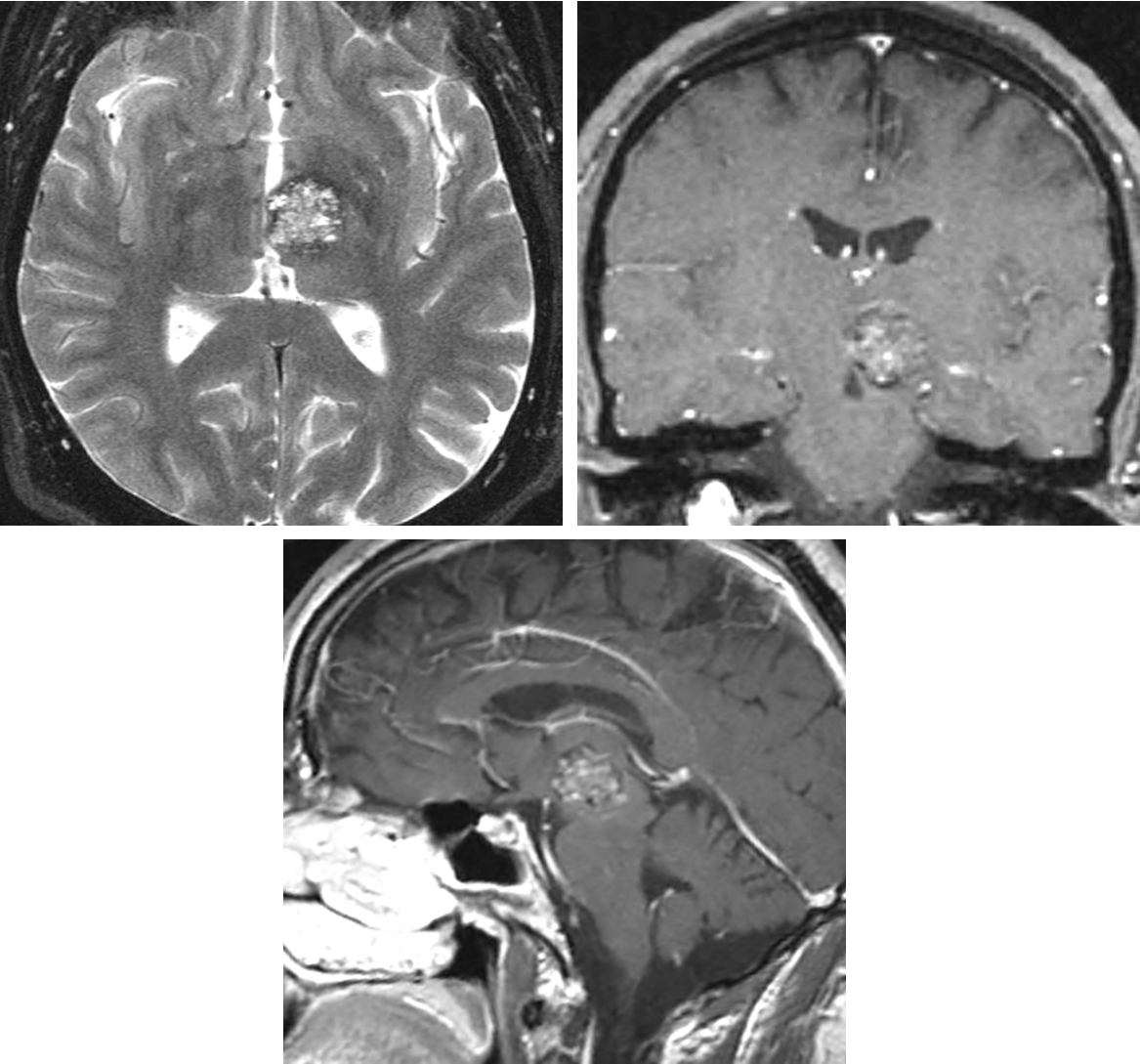 Lesions affecting the supralateral thalamus are handled via the contralateral transcallosal transventricular (via lateral ventricle) route to access the lateral pole of the CM.

Figure 5: The position of the head and neck (45 degrees against the floor) for the interhemispheric approach is demonstrated both in supine (left) and lateral (right) body positions. The lateral body position can prevent excessive rotation of the neck.

Figure 6: A CM in the anterior and superior aspect of the thalamus is evident. This lesion was reached via a contralateral interhemispheric transcallosal route. 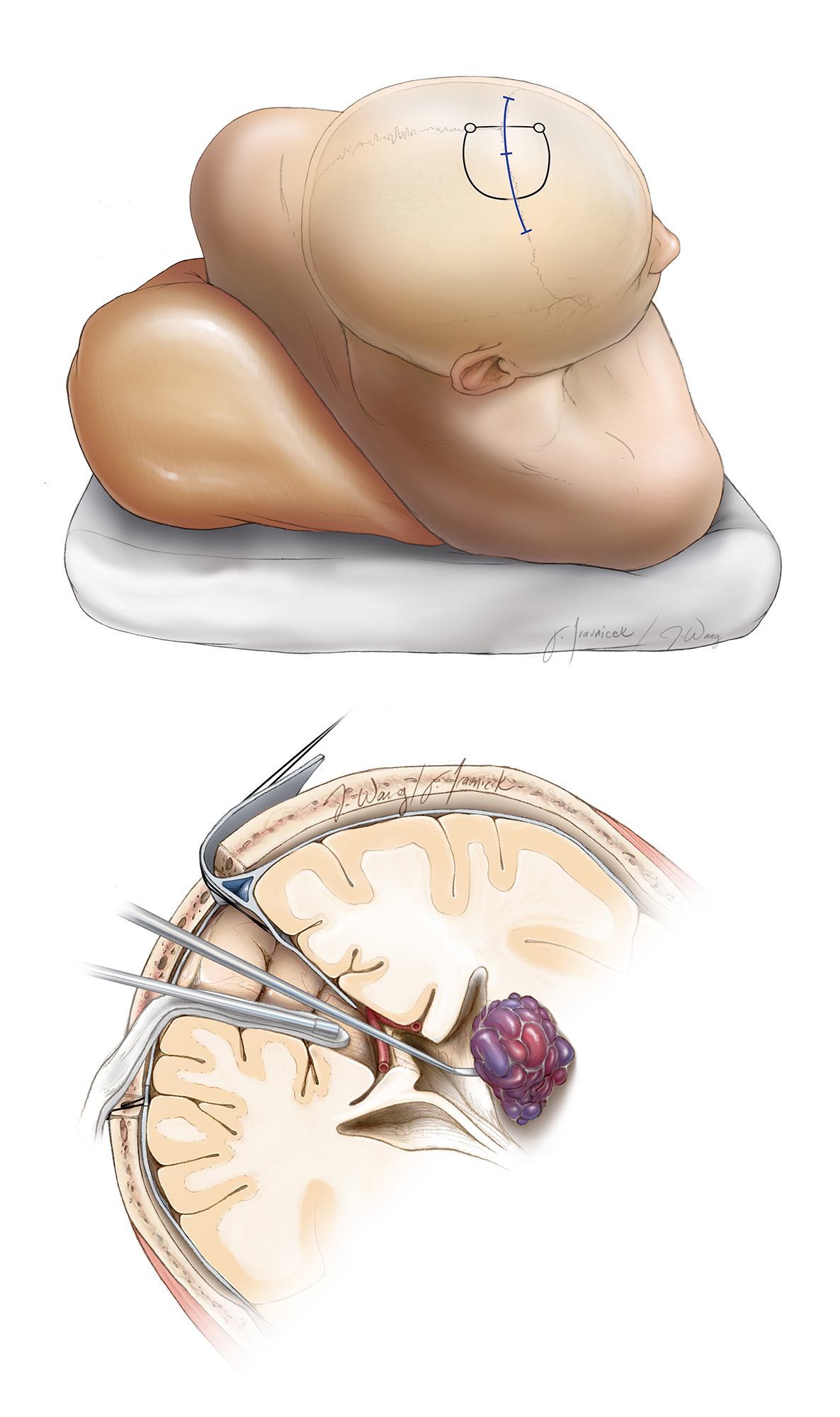 Figure 7: The contralateral transcallosal approach (“cross-court” trajectory) provides improved visualization of the most lateral aspects of the lesion without unnecessary retraction on the ipsilateral hemisphere. The craniotomy crosses the coronal suture and unroofs the superior sagittal sinus. A 1-cm to 2-cm callosotomy, guided by navigation, is often adequate. For more details regarding this exposure, refer to the interhemispheric craniotomy chapter.

Lesions affecting the posterior and superior thalamus are approached via the posterior interhemispheric transcallosal approach. The principles of body and head position are the same as discussed above, however, the incision is obviously planned over the superior parietal lobule.

Figure 8: The body and head position for a posterior interhemispheric transcallosal approach is shown.

Lateral thalamic lesions are reached via the trancortical transparieto-occipital transventricular approach using tubular retractor systems. Refer to the Colloid Cyst: Transcortical Approach chapter for nuances of technique regarding the use of these tubular retractors. Unintended neurologic deficits are likely with the use of aggressive retraction and fixed retractor blades on the internal capsule.

The posterior transsylvian transinsular trajectory may be an alternative approach for lesions posterolateral to the thalamus. Tractography is mandatory to localize the descending fibers relative to this risky operative pathway.

Posterior and inferior thalamic lesions are exposed via the supracerebellar transtentorial approach.

For basal ganglia lesions that are lateral to the caudate, the transsylvian anterior and posterior transinsular approaches are more suitable. Preoperative functional imaging including tractography determines the safety of the operative corridor in preserving descending motor fibers, especially for posterior lesions near the corona radiata and internal capsule.

During resection, the indispensable lenticulostriate arteries must be differentiated from small feeding arteries to the malformation. Once the insular cortex has been exposed, a transsulcal approach via image guidance directs the operator toward the lesion. 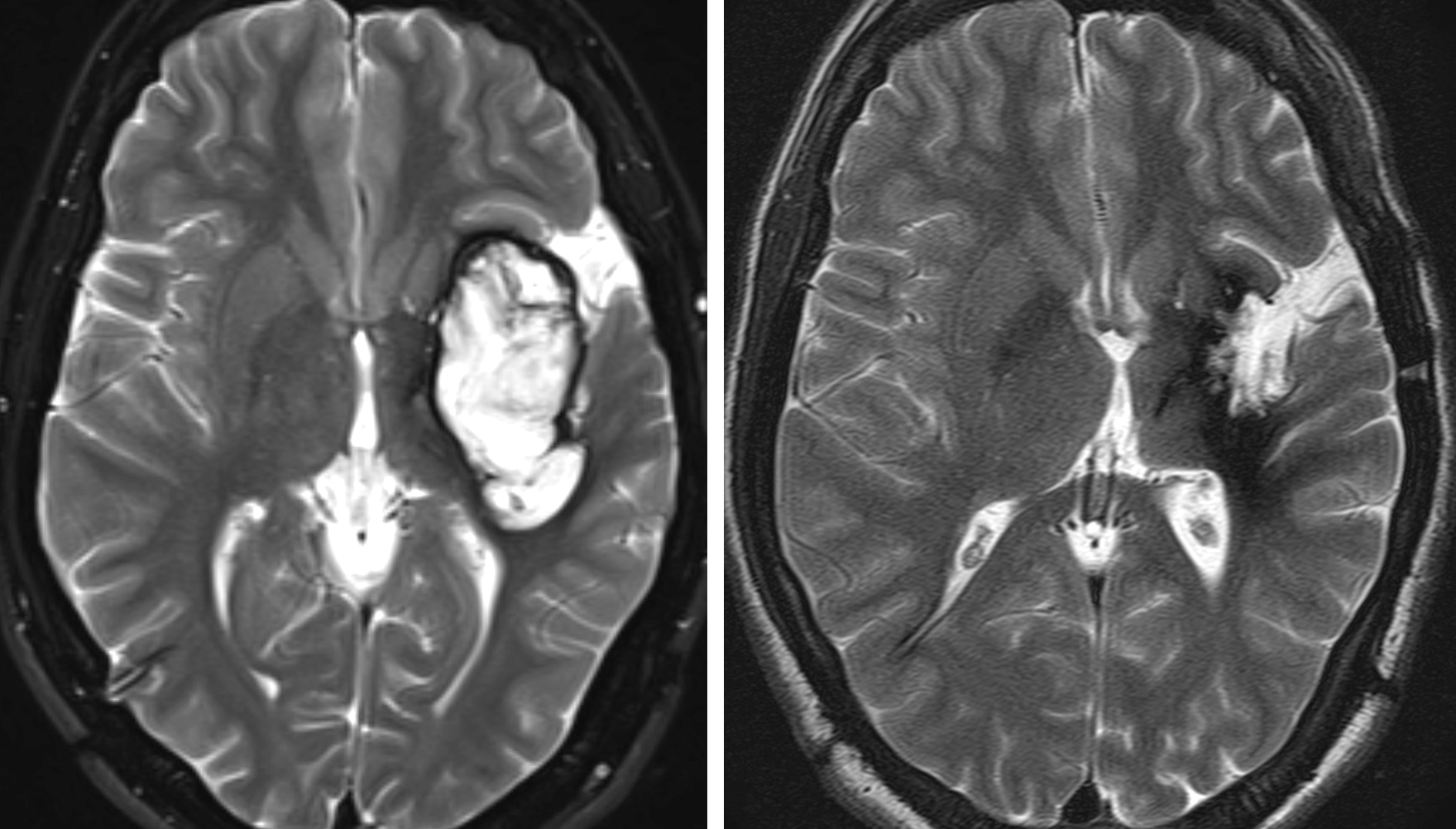 Figure 9: A lateral insular CM (left) was resected via the transinsular route. The extended gliotic margins encompassed the descending motor tracts. These gliotic margins were carefully protected during resection (right).

Lesions along the inferior and anterior aspect of the basal ganglia can be accessed via the subfrontal trajectory through the supracarotid space bounded by the proximal M1 and A1 segments. The orbitozygomatic osteotomy is needed for large lesions with more superior extensions. The corticotomy is performed in the posterior orbital region and anterior perforating substance. The lenticulostriate arteries arising from the nearby A1 and M1 branches enter the anterior perforating substance in this territory and have to be meticulously preserved. Any injury to them is a major source of operative morbidity. 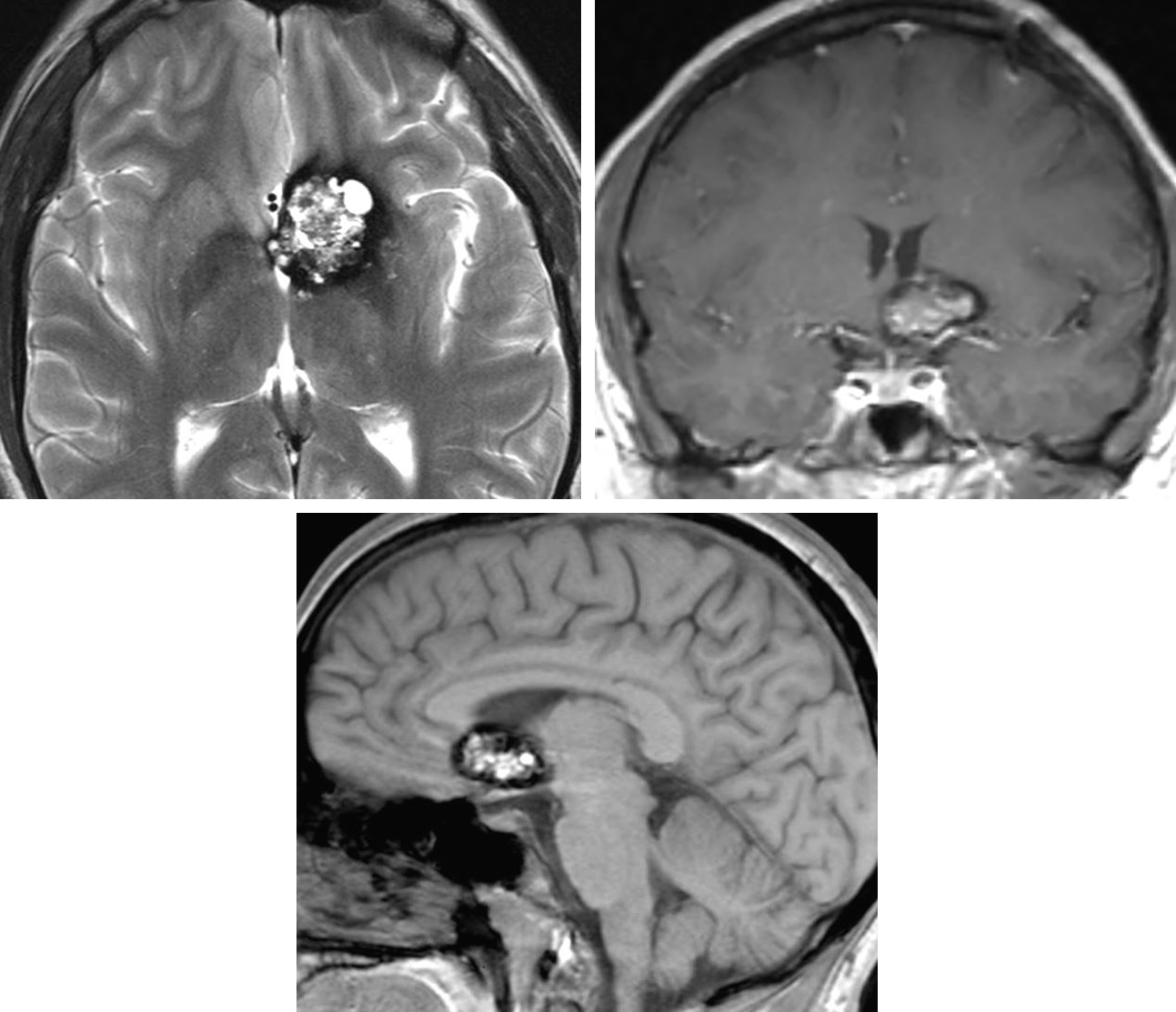 Figure 10: An inferior basal ganglia CM is shown. This lesion was approached via an orbitozygomatic craniotomy. The preservation of the perforating vessels leading to the anterior perforator substance is imperative.

The superior basal ganglia lesions that displace the caudate nucleus laterally and approach the lateral ventricle and its ependymal surface are best served by the expanded lateral trajectory of the contralateral interhemispheric transcallosal route as discussed above. 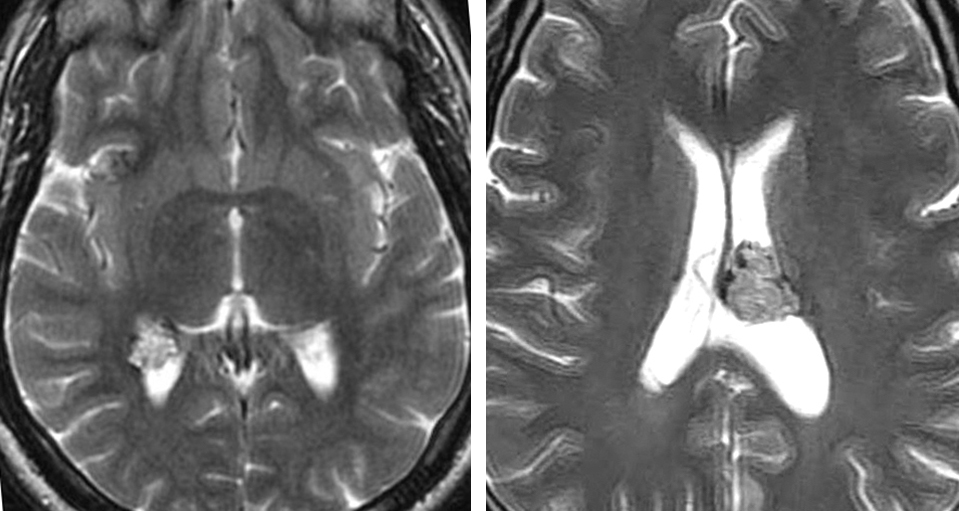 If a CM resides underneath the central lobule, a longer anterior-to-posterior trajectory (versus transgressing the vital cortex directly on the lesion) is necessary to void functional cortices. Functional MRI and diffusion tensor imaging studies can direct the surgeon toward the safe entry zones. Localization of the central lobule is reliable using these preoperative functional studies and intraoperative mapping is rarely necessary.

Compared to sensorimotor functions, the speech and language functions are more diffusely dispersed and encompass relatively larger cortical areas. For this reason, small transsulcal dissection in these eloquent cortical areas often do not lead to permanent disruption of the speech and language functions. Moreover, the hemorrhagic lesions often lead to some corresponding deficits that justify resection within these functional areas.

Certain principles can minimize the risk of injurious operative maneuvers. Once the lesion’s capsule has been identified, I first evacuate the hematoma to create more working space within and around the lesion to mobilize the CM. Next, I resect the caverns in piecemeal fashion using pituitary rongeurs. As intracapsular decompression is pursued, a well-defined plane on the periphery of the CM’s capsule will emerge; this plane should be maintained using fine blunt dissectors so that subtotal resection is avoided.

The small feeding arteries are coagulated and cut. The CM can be shrunken with bipolar coagulation to allow visualization around its capsule. The pial or ependymal opening should be smaller than the diameter of the deep CMs, and piecemeal excision is warranted.

These maneuvers facilitate complete resection and sparing of the hemosiderin-stained white matter periphery that may be misidentified as part of the CM. This technique is similar to the one used for brainstem CMs. However, this method is in contrast to the one for epileptogenic cortical CMs that requires removal of the hemosiderin-stained borders to enhance the chance of postoperative seizure freedom.

Minimal bleeding is encountered from the dilated sinusoids within the CM, and gentle tamponade using small cotton patties is effective. Aggressive bipolar coagulation is avoided. A thorough investigation of the resection cavity is necessary to identify any residual CM that may mimic the appearance of the hemosiderin-stained borders.

Based on the location of the lesion, certain temporary postoperative neurologic deficits may be expected. These deficits are likely the result of manipulation of the resection cavity, retraction injury, or invasion of the normal brain en route to the CM.