Transcortical Transfrontal Approach for Resection of a Colloid Cyst

For general consideration, diagnosis, evaluation, indications for the procedure and preoperative considerations related to colloid cysts, please refer to the chapter on Colloid Cyst: Transcallosal Approach.

Figure 1: The tubular retractor system is shown (left image). A small right frontal craniotomy just anterior to the coronal suture and at Kocher’s point is completed using an “L”-shaped scalp incision. The more dilated ventricle (in this case, the right ventricle) is selected for access. Frameless stereotactic navigation is used to place a standard ventricular catheter into the frontal horn of the lateral ventricle aimed at the cyst or foramen of Monro (right image). 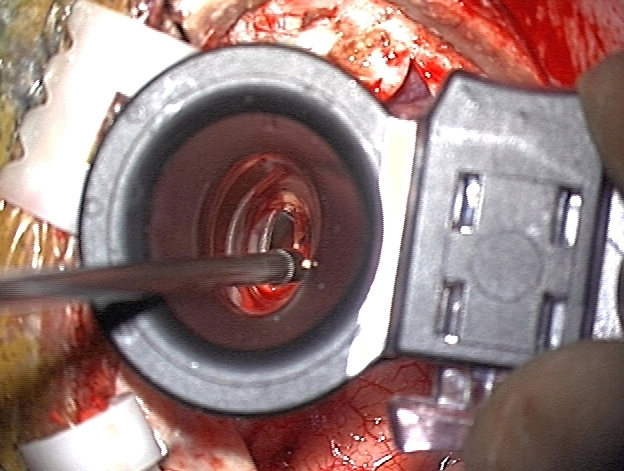 Figure 2: Next, the stylet of the ventricular catheter is removed and an operating room microscope is used to remove a small amount of brain tissue around and along the entire length of the catheter until the ventricle is reached and visualized. The catheter is then withdrawn and the 12-mm tubular retractor (working channel port of 5 cm in length), along with its inner introducer tube, is passed through the subcortical tract into the ventricle.

Upon return of cerebrospinal fluid (CSF), the tubular retractor system is fixed in place using a flexible arm attached to the Mayfield head holder. The inner introducer tube is then removed, and after minor adjustment in the tube angle, the foramen, lesion, and surrounding relevant structures are placed in the center of the retractor’s view provided by the microscope. Aggressive movements of the retractor tube are avoided to prevent subcortical injury. 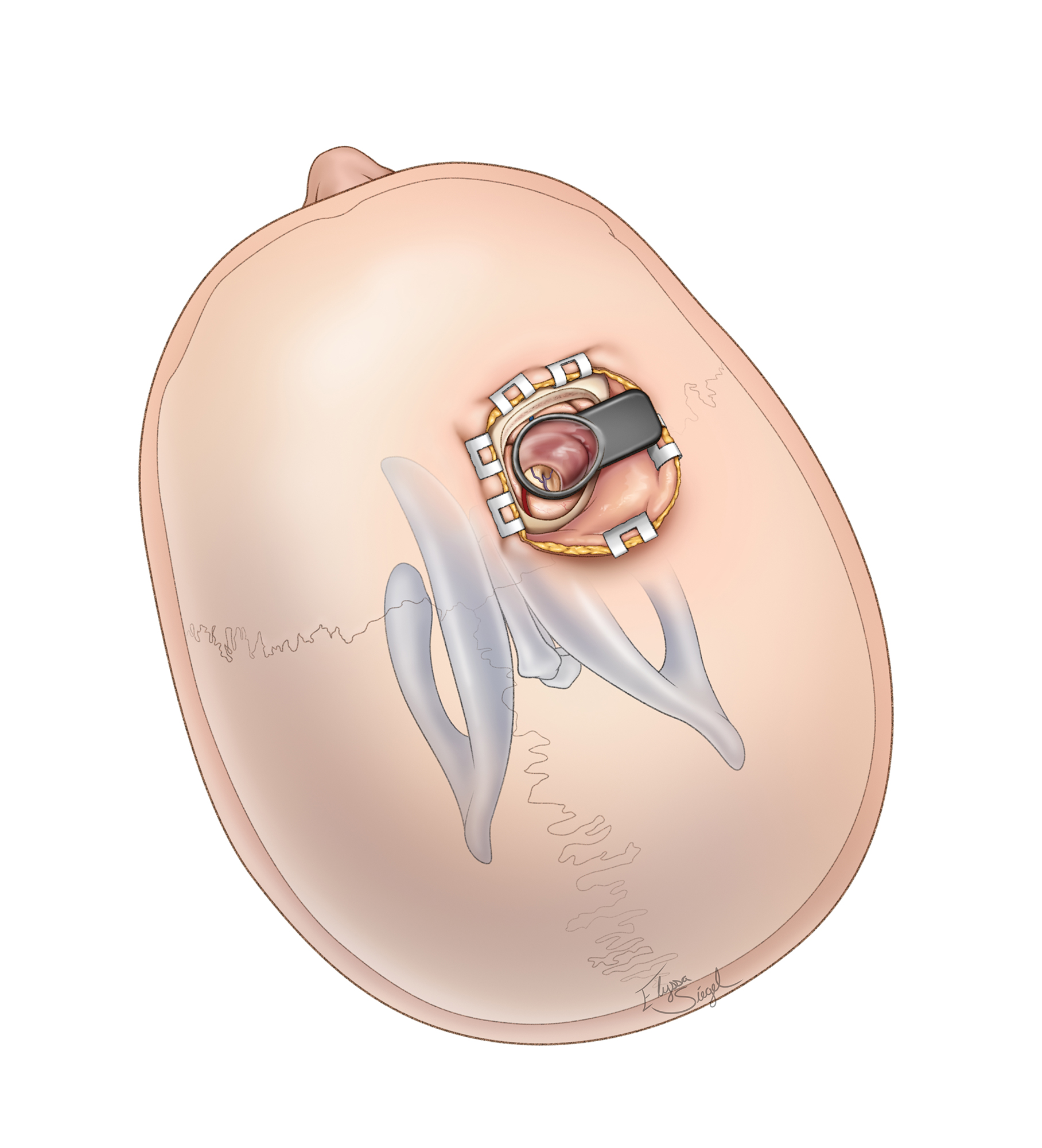 Figure 3: The location of the “L”-shaped incision and craniotomy at Kocher’s point is illustrated. The overall step-up and view of the ventricular system through the brain is also shown. Note the location of the coronal suture.

The transcortical route is a reasonable approach for reaching most small- to medium-size anterior third ventricular lesions. When compared with its transcallosal counterpart, it depends upon dilation of the ventricle, its exposure is somewhat limited, especially in its anteroposterior and lateral-medial working angles, and is therefore more appropriate for smaller lesions such as colloid cysts. Asymmetrical anterior third ventricular tumors can be tackled through a contralateral transforaminal trajectory (“cross-court route”) to reach the lateral aspect of the tumor.

The anterior transcortical approach also requires transection of some of the commissural and projection fibers. However, when compared with the transcallosal route, it avoids dissection around the bilateral cingula and spares the callosum. The risk of seizures from either approach is most likely comparable.

The choroids plexus is mobilized over the foramen. The cyst is first drained and then removed from the surrounding structures in a gross total fashion. I use standard microsurgical techniques and bayoneted instruments through the tube and follow similar steps to those described for the transcallosal technique. 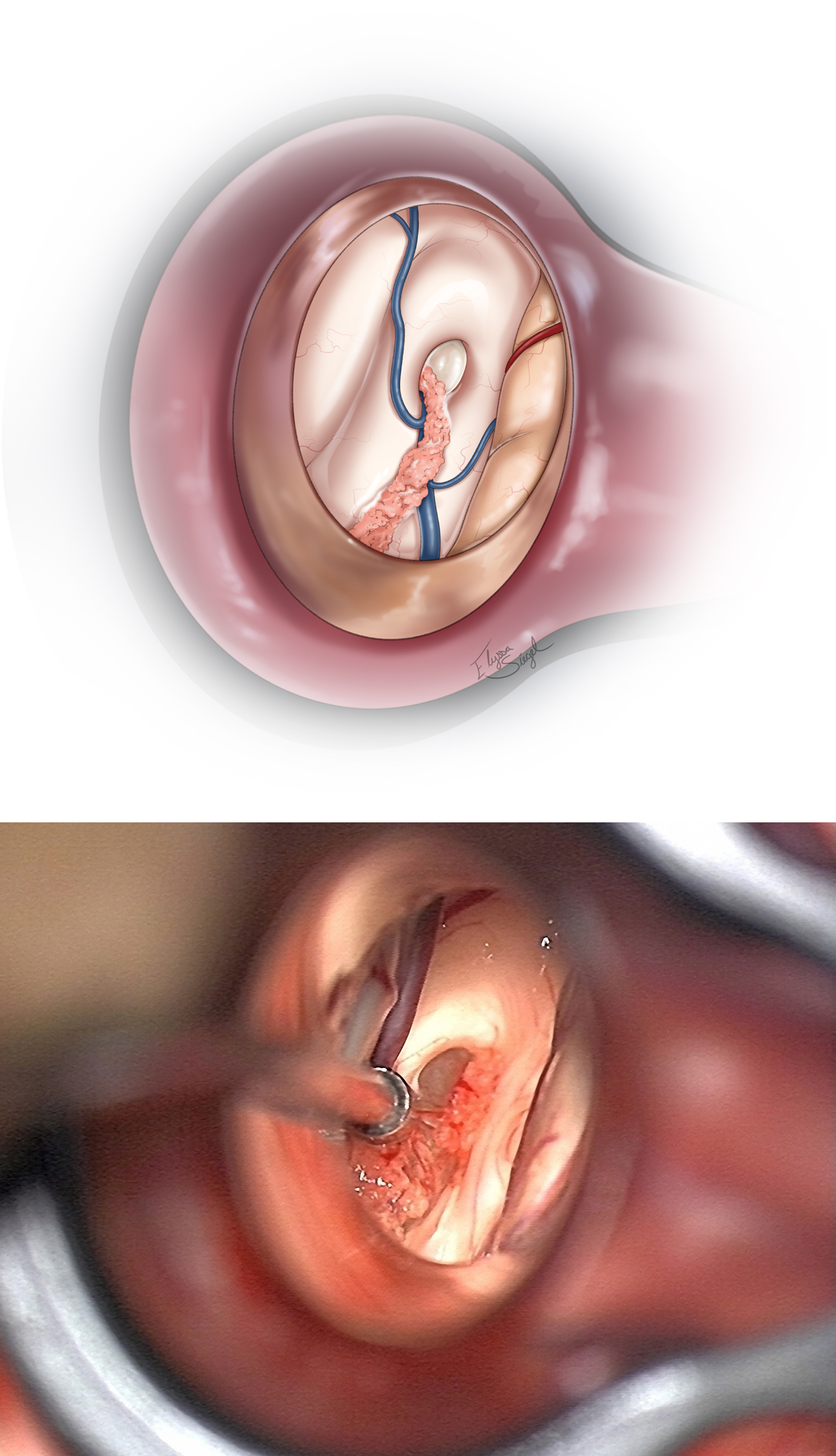 Figure 4: The transcortical transforaminal approach through the right frontal horn is illustrated. This approach offers a more limited exposure compared to its transcallosal counterpart. The relationship of the choroid plexus to the thalamostriate vein confirms entry into the correct ventricle. 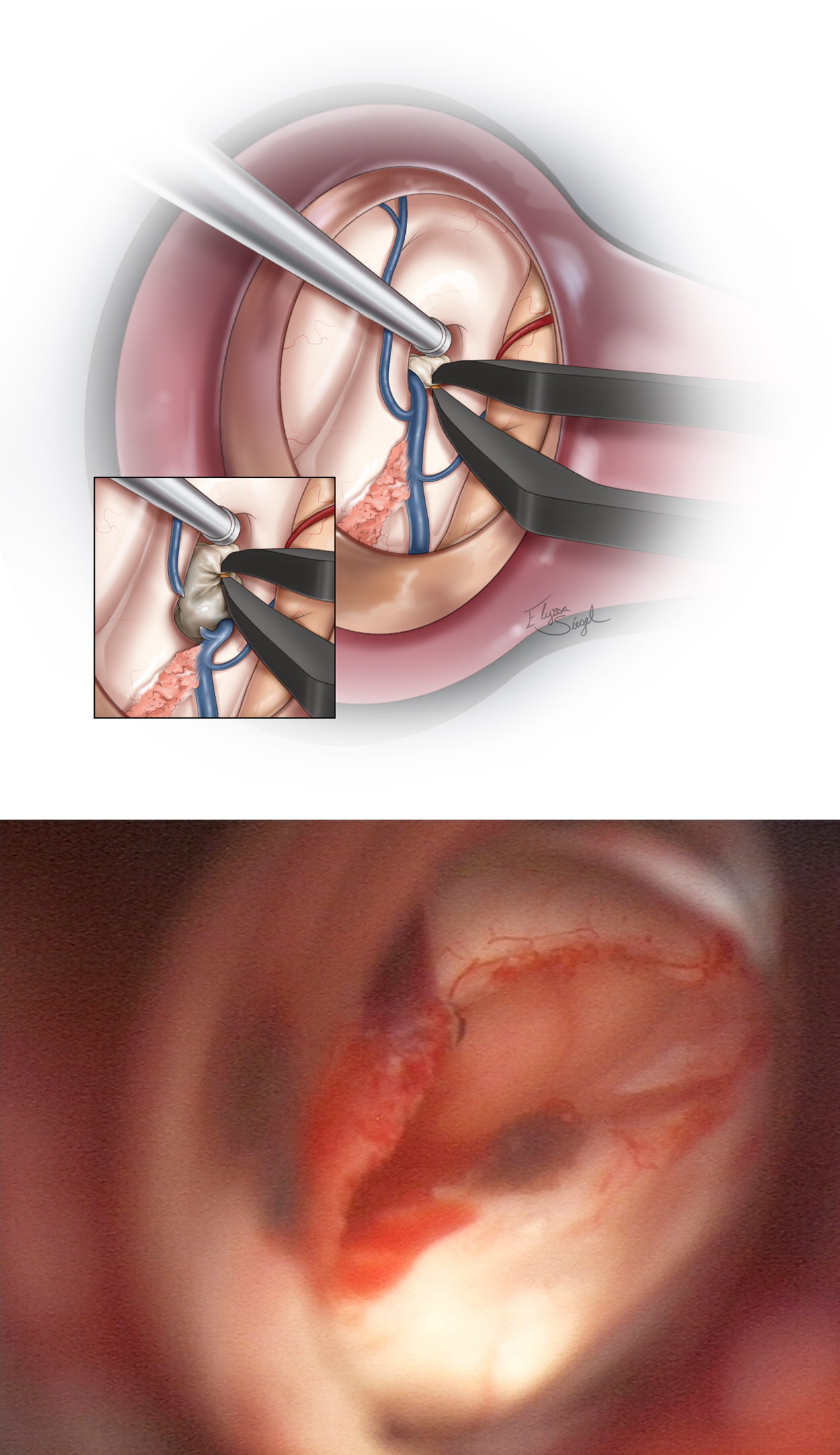 At the end of the resection, following immaculate hemostasis, the retractor tube is withdrawn, the subcortical tract allowed to collapse, and the craniotomy closed in standard fashion. I usually do not place an external ventricular drain in the ventricle for pristine resection of uncomplicated colloid cysts.

Figure 6: This photo reveals the relatively minimal amount of cortical disruption inflicted by the use of the described minitubular retractor system (left photo). The degrees of cortical and subcortical involvement by the miniretractor are demonstrated on magnetic resonance (MR) images (middle and right images).

For a detailed discussion of recommendations for postoperative care of patients with ventricular tumors, see the Principles of Intraventricular Surgery chapter.