A metastatic brain tumor originates from a primary tumor derived from tissue outside the central nervous system (CNS) or the surrounding meninges. The tumor secondarily disperses to involve the cranium, meninges, or brain parenchyma. 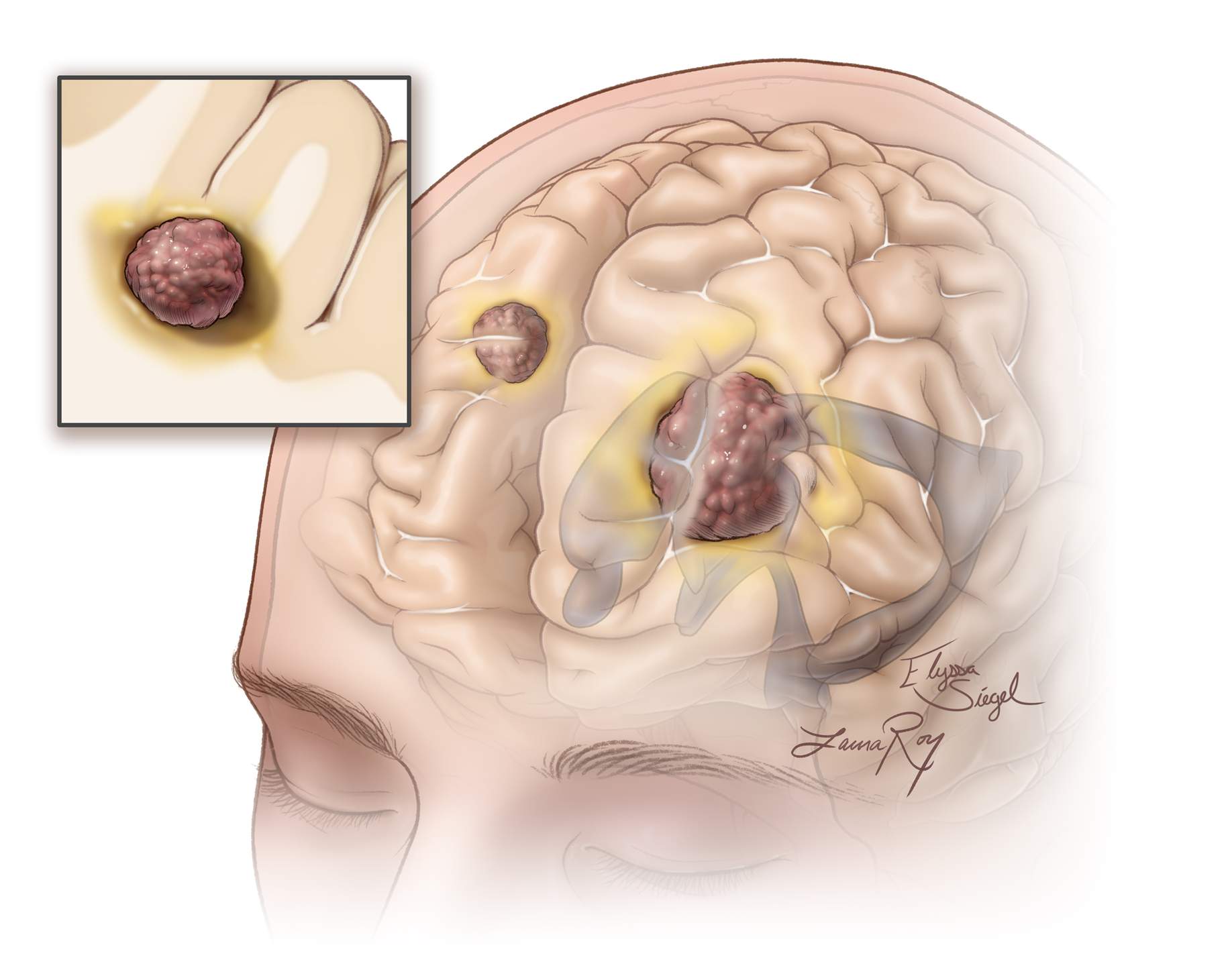 Figure 1: Metastatic tumors typically occur at the gray-white matter junction and lead to significant white matter edema (out of proportion to the size of the lesion). Multiplicity is frequently observed and larger lesions with significant mass effect/edema among patients with a reasonable life span and controlled systemic disease are candidates for resection.

Treatment of metastatic brain lesions has a history of contention with regard to its surgical indications. However, with recent improvements in imaging, the indications for resection of metastatic tumors have broadened.

Moreover, two pivotal prospective randomized studies, published in 1990 and 1993, supported resection of metastatic brain tumors along with the standard regimen of radiation therapy. In these studies, resection provided a survival advantage over radiation therapy alone. 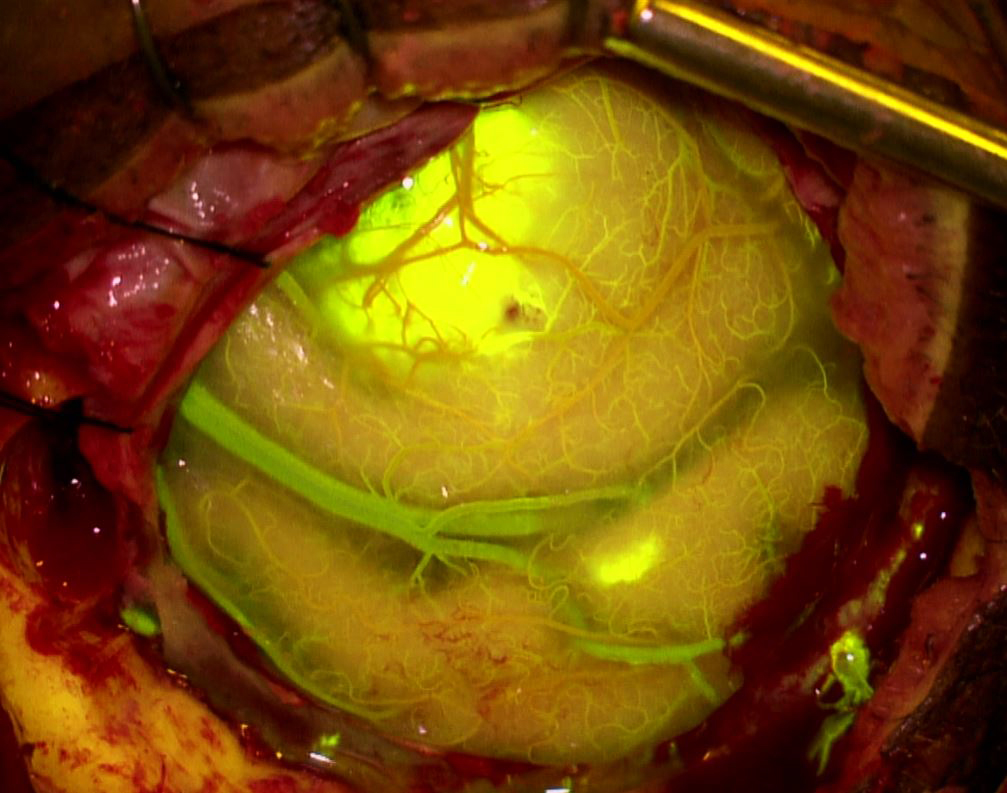 A comprehensive oncologic evaluation of a patient with a known metastatic brain lesion is imperative to the feasibility of intracranial resection. The first step in the evaluation process includes staging or assessment of the extent of systemic and intracranial involvement. This evaluation is often performed via diagnostic imaging and with the input of our neuro-oncology colleagues. The most common imaging modalities for assessment of systemic disease include computed tomography (CT) of the chest, abdomen, and pelvis with and without contrast and selective use of positron emission tomography (PET) for certain tumor subtypes.

Magnetic resonance imaging (MRI) determines the extent of CNS involvement. This modality provides superior parenchymal resolution, allowing better accuracy in defining the number of tumors, their margins and the degree of peritumoral edema and mass effect.

Contrast-enhanced MRI sequences will detect small asymptomatic lesions (<5 mm); lesions of this size are frequently overlooked on CT scans. The anatomic data acquired from the MRI is crucial for planning the approach for resection. Although inferior to the MRI in providing parenchymal detail, CT scans are particularly helpful in the evaluation of bony erosion, particularly when the lesions involve the skull base and calvarium.

If an intracranial lesion is identified prior to the diagnosis of a systemic malignancy, a variety of possible etiologies are included in the list of differential diagnosis. These entities include intra-axial primary tumors (gliomas), extra-axial primary tumors (meningioma, schwannoma), vascular anomalies (thrombosed aneurysm, vascular malformation, hematoma), intracranial abscess, demyelinating process, and granulomatous disease.

Figure 3: This patient presented with lower extremity weakness and was diagnosed with two parasagittal metastases (left image). The intense edema disproportionate to the size of the lesion is characteristic of metastatic masses (middle image). Because her systemic disease was under excellent control, both lesions were removed via a parasagittal craniotomy. The anterior lesion under the sensorimotor cortex was approached via an interhemispheric transfalcine route to avoid undue retraction on the ipsilateral functional cortex.

The appropriateness of surgical resection for intracranial metastatic disease requires individualized considerations. The following factors play an important role in the decision-making process: 1) the extent of systemic metastatic spread and intra-axial involvement, 2) type of malignancy, 3) primary tumor’s response to chemotherapy and/or radiation, 4) size, location, and multiplicity of the intra-axial lesions, and most importantly 5) the overall life expectancy of the patient.

The surgical management of two or three parenchymal metastatic lesions is controversial. I often do not offer surgical resection to these patients, especially if the patient is functionally impaired or suffers from advanced systemic disease. Instead, I recommend adjuvant therapies. However, special consideration may be given to patients with limited systemic disease who suffer from two nearby lesions, both accessible via a single craniotomy.

Three or more parenchymal lesions or simultaneous parenchymal and leptomeningeal involvement are contraindications to surgical intervention because limited resection will most likely not affect the natural history of advanced metastatic disease.

The lack of data supporting a survival benefit among patients in the latter two groups is recognized in the surgical community. Limited data regarding resection of all metastatic lesions combined with radiation therapy from a cohort of patients with multifocal intracranial metastatic disease demonstrated superiority to treatment by standard radiation therapy alone. Despite these results, more data are necessary before considering operative intervention in these more controversial groups.

Patients suffering from metastatic disease are more likely to be medially compromised, and therefore a full preoperative medical assessment is warranted. The patient may have undergone prior pneumonectomy for lung cancer. Pulmonary function testing is necessary to minimize the risk of respiratory compromise postoperatively. Upon stratifying the patient’s risk factors, it is advisable to optimize the neurologic status and medical status of each patient before the operation.

The location of an intracranial tumor determines the nuances of technique for its resection. Two adjacent metastatic lesions may be resected concurrently. For general tenets of craniotomy and exposure, please refer to the Cranial Approaches volume.

Following is a discussion of techniques for removal of a cerebellar metastatic lesion. Similar principles apply to all such lesions. 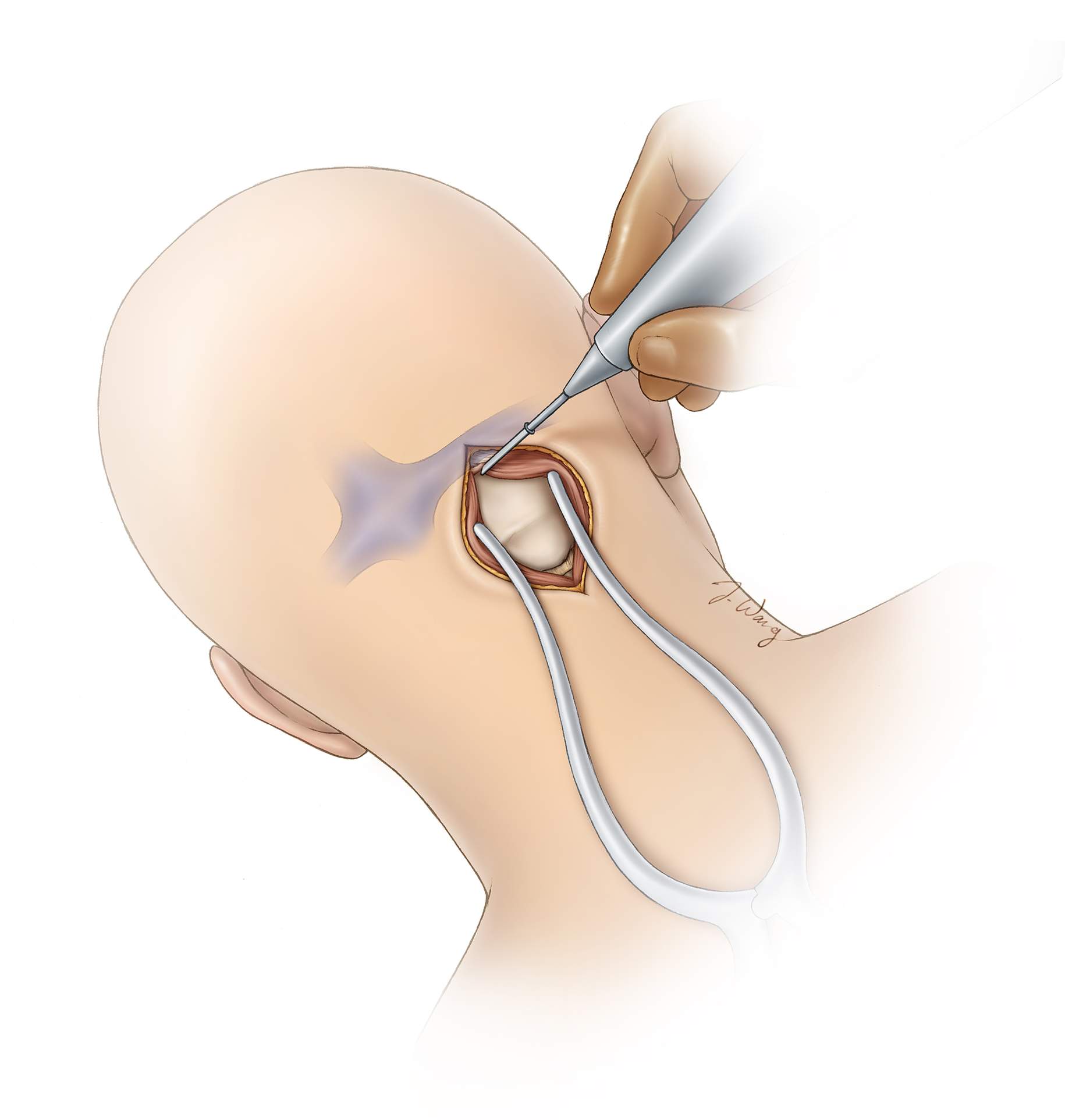 Figure 4: A paramedian incision is appropriate for a dorsal cerebellar hemispheric metastatic tumor. I place the patient in the lateral or park-bench position and use intraoperative navigation. Linear incisions heal most effectively because of their wide vascular pedicle, and they are least likely to break down during radiation treatment. 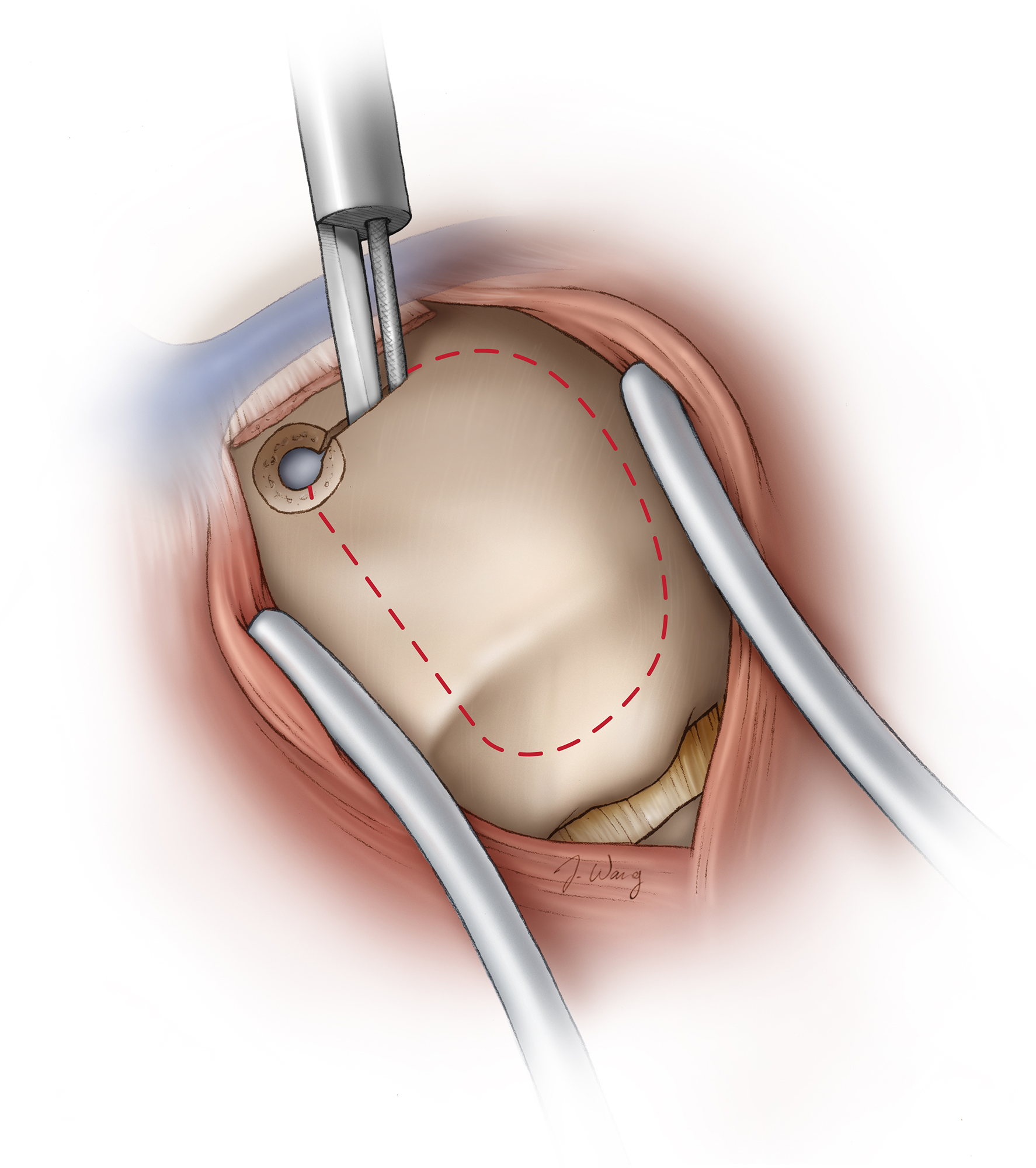 Figure 5: The scalp and muscle layers are mobilized; navigation guides the extent of a limited craniotomy. 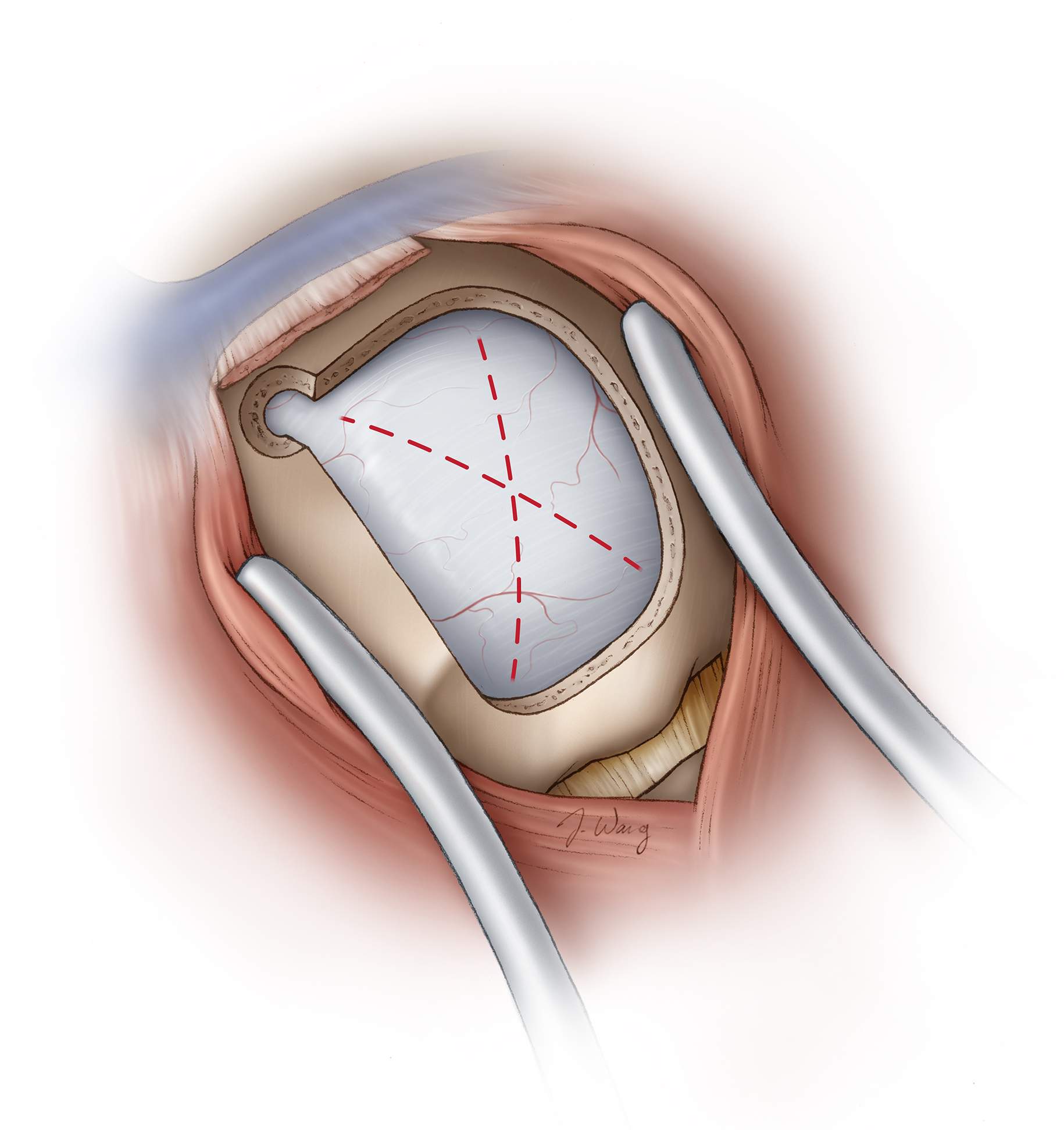 Figure 6: I frequently incise the dura in the stellate fashion for metastatic lesions.

Cortical stimulation or phase reversal mapping techniques may be used for accessing supratentorial lesions in the vicinity of the functional cortices. These techniques guide the operative pathways that are least likely to disrupt function. Please refer to the Sensorimotor Mapping for Glioma chapter for more details.

The suggested operative trajectories for different intra-axial metastatic lesions may be classified into eight different categories; five are for supratentorial and three are infratentorial pathologies. These classifications are reviewed in Table 1 below. 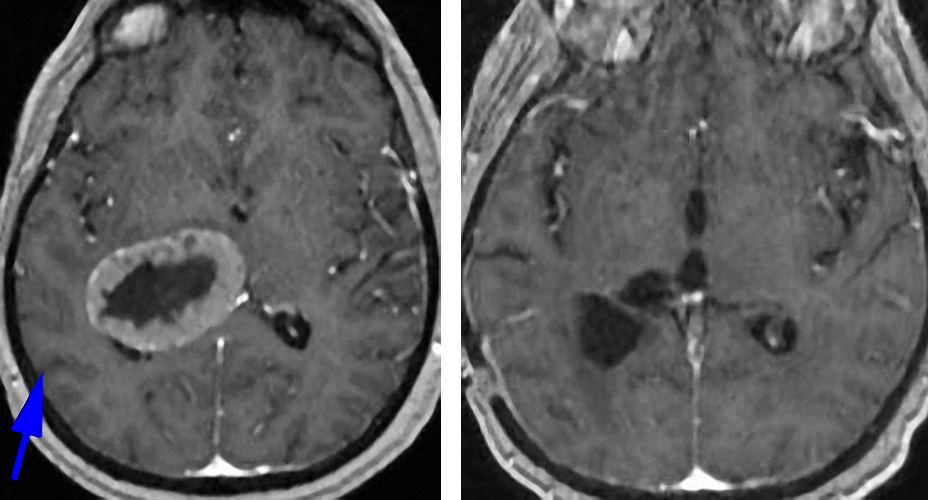 Figure 7: A large endometrial metastasis to the periatrial region was resected via a combination of transcortical and trans-sulcal (blue arrow) pathways.

The interhemispheric approach is generally reserved for medial parenchymal tumors within the cortical and subcortical regions. For additional details on approach to ventricular tumors, see the Diagnosis and Technical Principles in Intraventricular Surgery chapter.

Infratentorial lesions present a challenge because of the limitations in the anatomic approach. In most cases, the posterior transparenchymal route is appropriate for reaching dorsal lesions. For vermian metastatic tumors, a vermian split may be performed, although this maneuver carries a risk of vermian split syndrome (a small risk since the tumor has created most of the operative corridor). 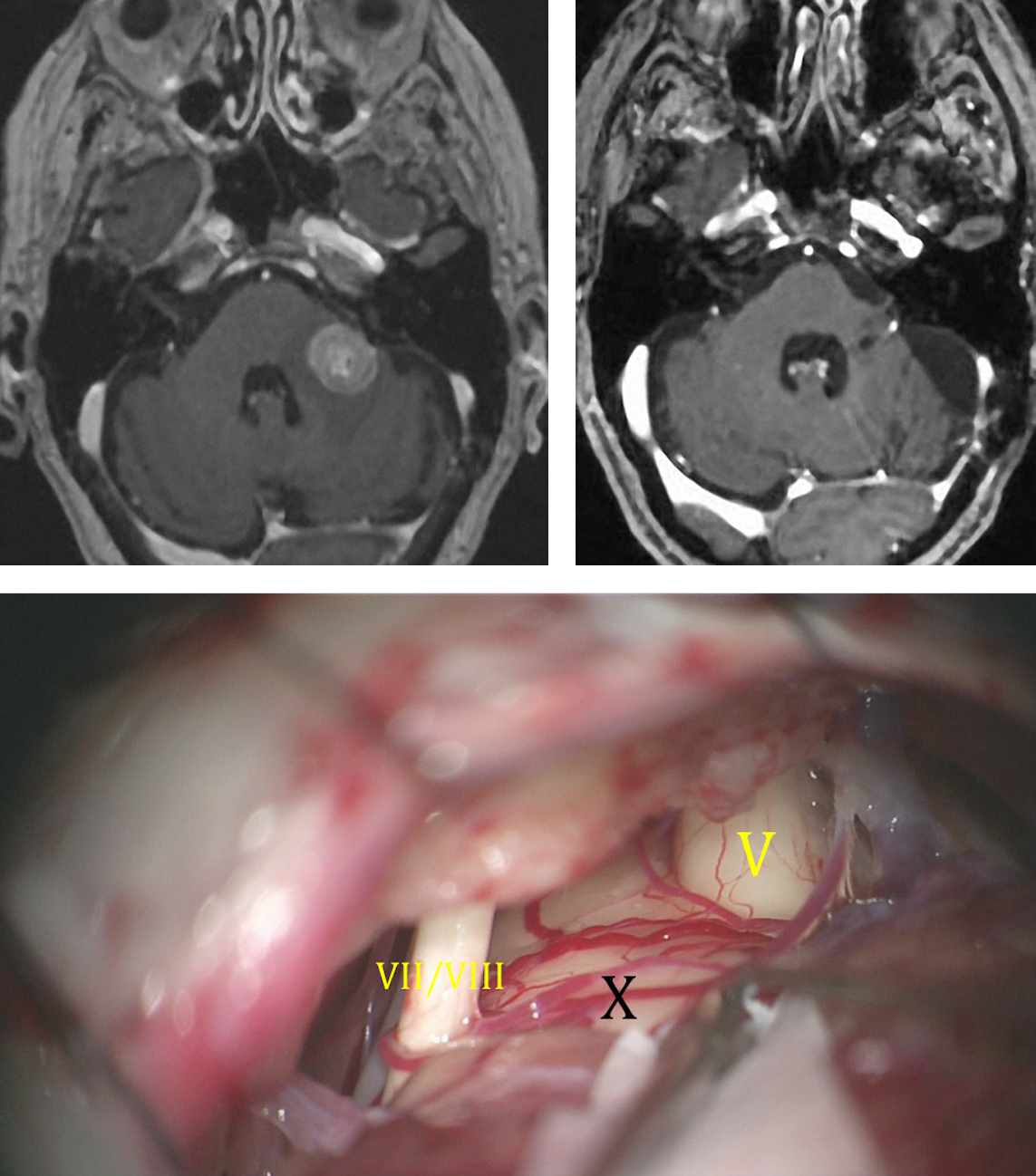 Figure 8: The lateral transcisternal route via a retromastoid craniotomy is reasonable for tumors located within the cerebellopontine fissure or anterolateral hemisphere. These tumors are frequently lateral to the root entry or exit zones of the cranial nerves. The above images show a metastatic tumor in the middle cerebellar peduncle approached via a retromastoid craniotomy. The location of the tumor between the cranial nerves V and VII/VIII is marked with X (lower image).

Upon exposure of the mass, there are several important surgical features unique to metastatic lesions. The mass is firm and devoid of neuronal tissue and has well-demarcated margins. These lesions appear grossly less infiltrative than gliomas.

There is an easily recognizable pseudocapsule surrounding the metastatic mass, which can serve as an anatomic landmark. The pseudocapsule is a result of the gliosis in response to the malignant tumor.

Any unintentional entry into the tumor mass before its devascularization may generate bleeding that is difficult to control because of an unpredictable vascularization pattern. This is particularly important during resection of highly vascular metastatic tumors such as medullary thyroid cancer, renal cell carcinoma, and melanoma. The en bloc resection technique also has the potential advantage of decreasing the risk of inadvertent tumor seeding from the resection cavity.

An en bloc resection should be attempted for lesions measuring less than 3 cm in diameter. For larger lesions, brain mobilization is most likely required to facilitate en bloc resection. Any cystic component of the mass should be drained first to create space for tumor manipulation. Subtotal circumferential devascularization allows piecemeal removal of large lesions not amenable to en bloc removal.

Larger tumors are more likely than the smaller spherical lesions to possess irregular and asymmetric nodules hidden within the adjacent white matter. Therefore, the surgeon should be aware of resection cavity bleeding as a potential indicator of residual tumor during excision of larger masses.

Despite their well-defined gross appearance and demarcated borders, metastatic lesions are invasive, and metastatic cells can be found up to 10 mm away from the original tumor mass. Therefore, I attempt to resect at least a 5-mm peritumoral margin around the mass to decrease the risk of recurrence. This goal cannot always be achieved, particularly in the vicinity of functional cortices and white matter tracts. 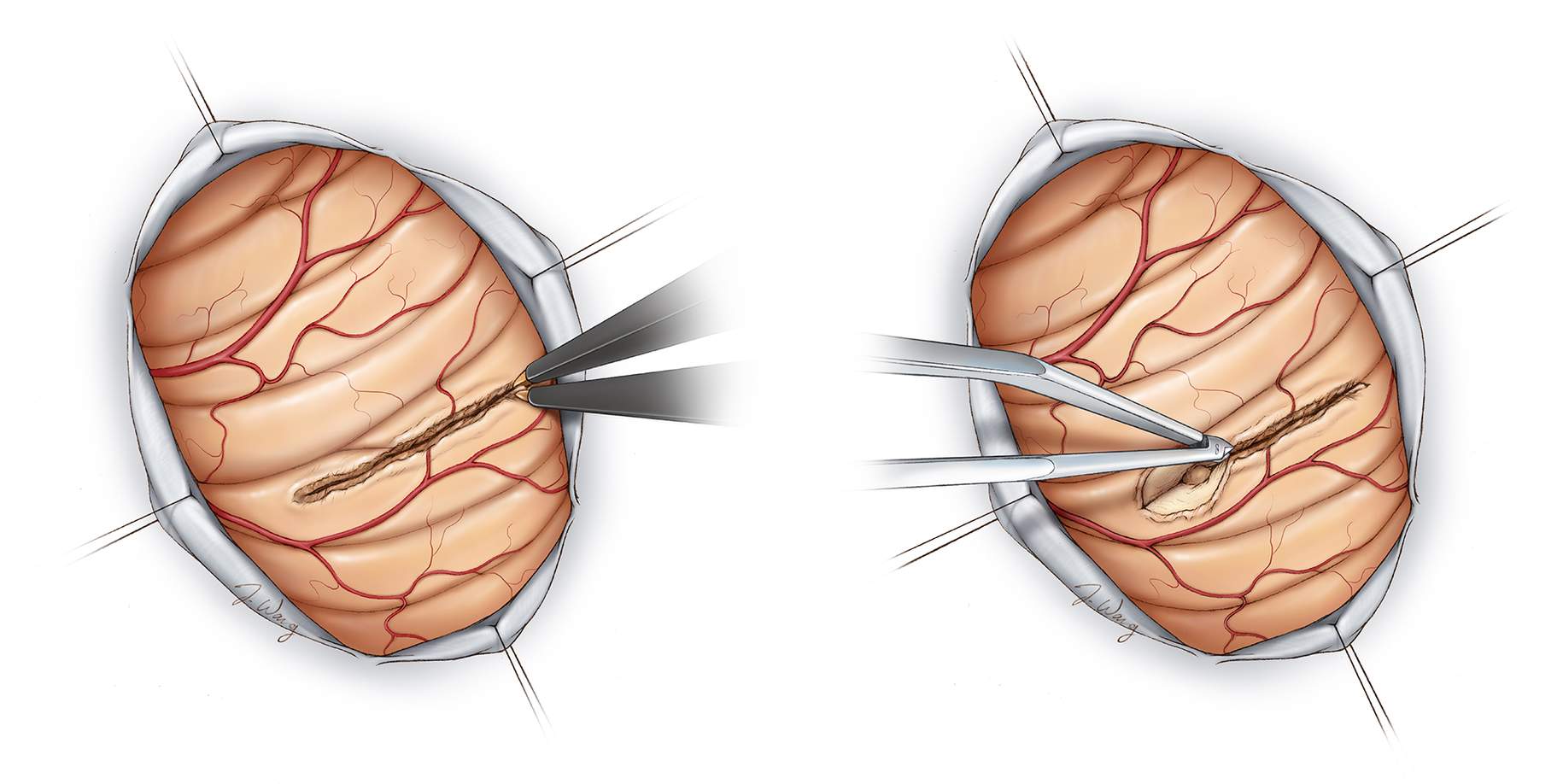 Figure 9: A small corticotomy in a relatively avascular region of the cortex exposes the tumor capsule. The mass is firm and easily distinguishable from the surrounding peritumoral gliomatous/gelatinous tissue. The associated cyst or hematoma should be immediately evacuated to relieve tension and allow tumor manipulation without undue traction on the parenchyma. 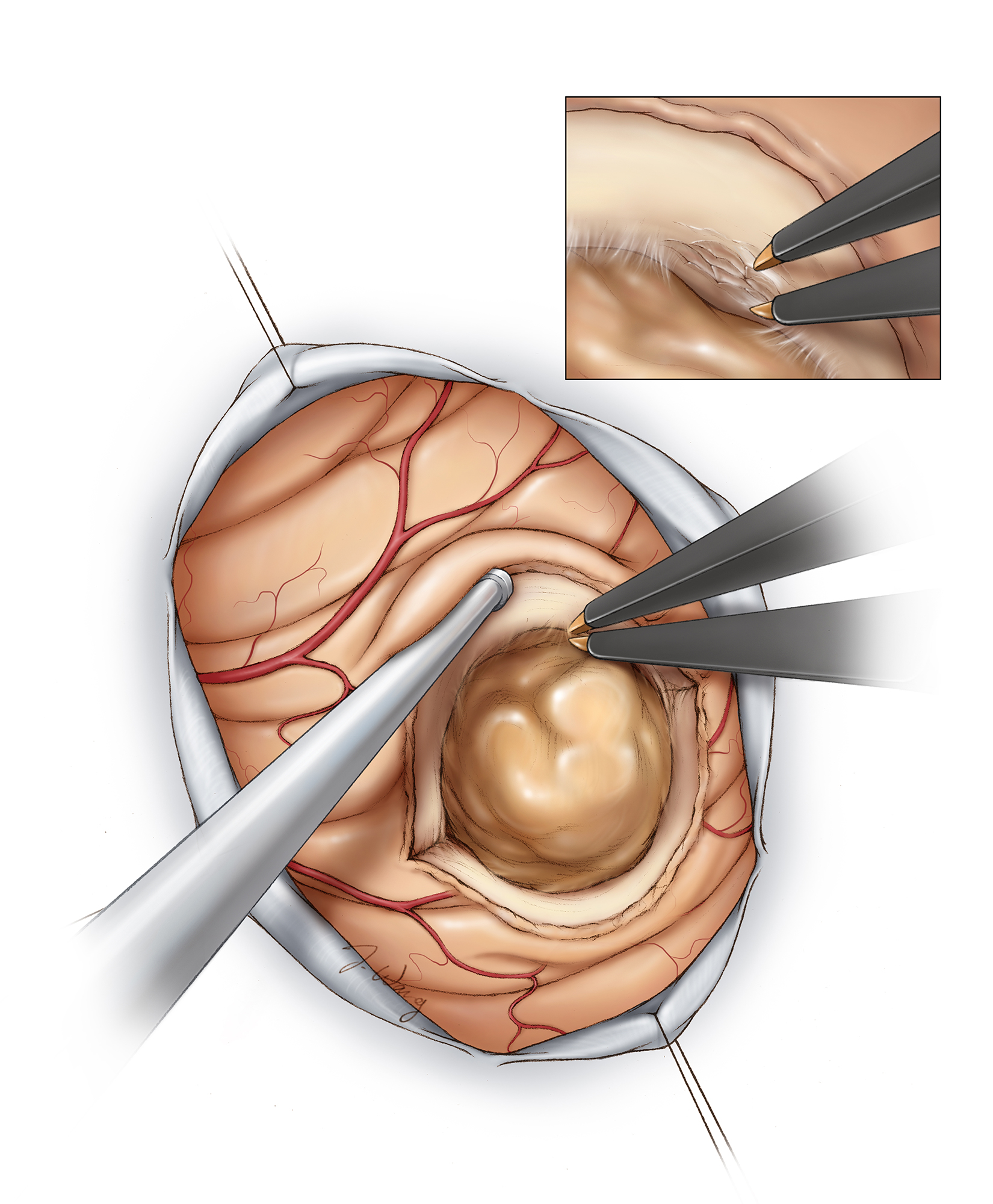 Figure 10: Once the posterior capsule is exposed, I use bipolar forceps to coagulate and disconnect the tumor capsule. I used these forceps like scissors and repeatedly open and close their tines to coagulate/emulsify 2-3 mm of the immediate peritumoral tissue, effectively devascularizing and isolating the mass (inset image). The suction device dynamically mobilizes the surrounding brain. 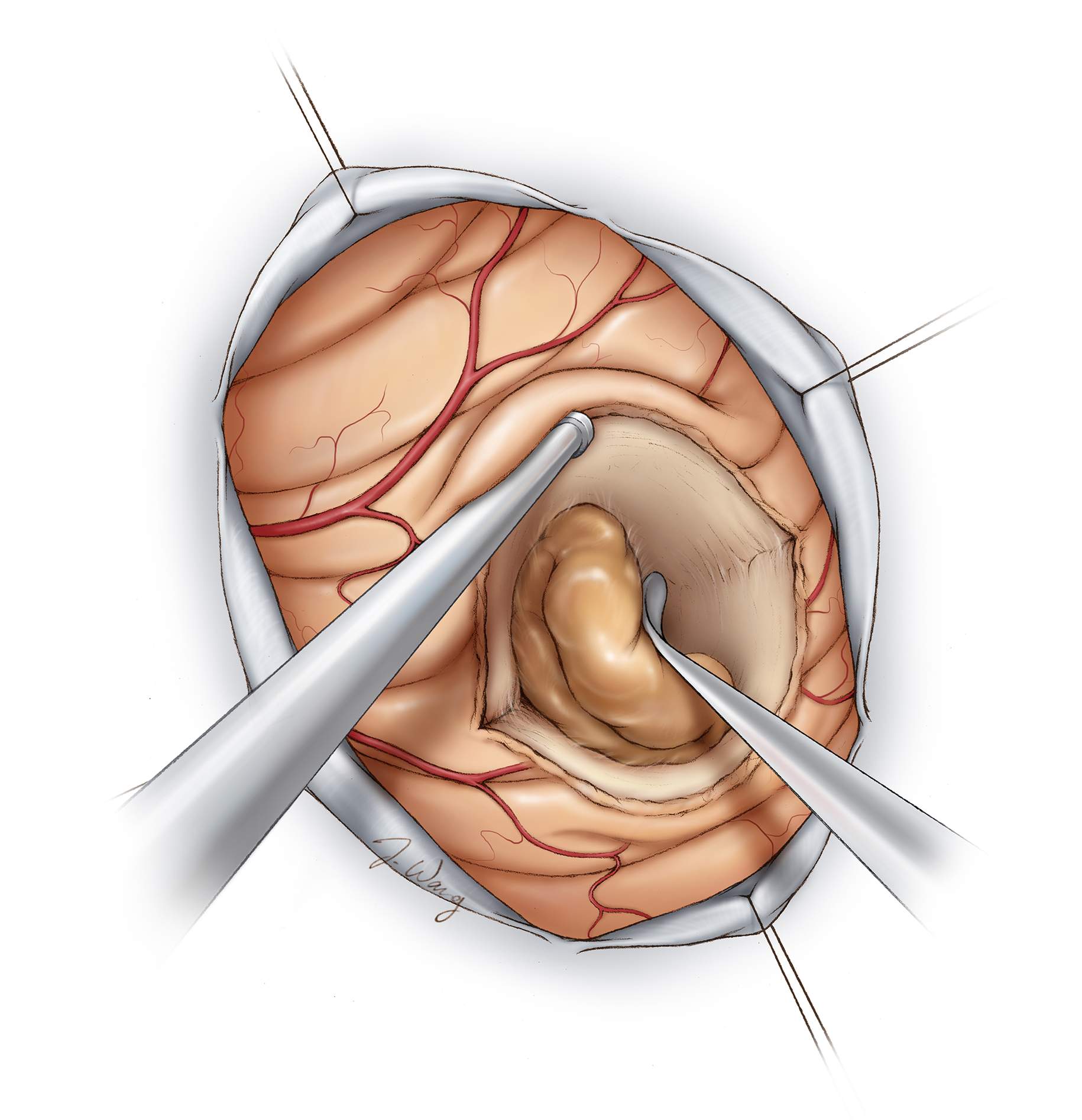 Figure 11: The borders of the mass are respected and not violated to avoid bleeding from inside the tumor. If the mass is inadvertently entered, expeditious disconnection of the remaining capsule is a reasonable strategy to control bleeding. A fine blunt dissector may be used to work around the avascular dissection planes, preserving the integrity of the capsule. Finally, the tumor is delivered en bloc. Bleeding from the walls of the resection cavity indicates the presence of hidden residual tumor; careful inspection rather than indiscriminate coagulation is advised. Gross total removal of the mass is the most effective hemostatic maneuver.

If any of the vital vascular structures (i.e., the middle cerebral artery) are encased by the tumor, subtotal removal is warranted. A small rim of tumor is left behind. Any neurologic impairment caused by the procedure offsets the survival advantage gained by resection.

I avoid calvarial defects; chemotherapy and radiation therapy further promote bone loss and osteopenia. The thin bone combined with a calvarial defect and reduced scalp hair can increase the visibility of skull defects and lead to cosmetic deformities.

Cerebral edema is a particular concern for these patients postoperatively. Therefore liberal continuance of corticosteroids postoperatively is a recommended precaution to avoid this complication. The dose should be gradually tapered as tolerated.