Lesions of the fourth ventricle are covered by the cerebellar vermis and may be exposed through either of two operative corridors: The telovelar and transvermian routes. The transvermian approach which involves transecting the inferior vermis is typically used for large lesions that occupy the rostral fourth ventricle and do not extend into the lateral recesses. The disadvantages of this approach are that the exposure is limited to midline lesions and the vermis must be divided. Vermian split syndrome manifests with nystagmus, gait disturbance, oscillation of the head and neck, truncal ataxia, and disturbance in equilibrium. In addition, pediatric patients may suffer from cerebellar mutism.

The telovelar approach uses natural planes and therefore is less destructive. Lesions within the foramen of Luschka are reachable, and the rostral extent of the intraventricular exposure can be expanded by more flexible inferior-to-superior working angles through a C1 laminectomy. This maneuver can lead to ventricular exposure that is on par with the transvermian approach, providing a generous exposure of the entire rostrocaudal length of the ventricle from the obex to the aqueduct. Moreover, the telovelar route provides a more expanded view of the lateral and supralateral recesses of the foramen of Luschka. 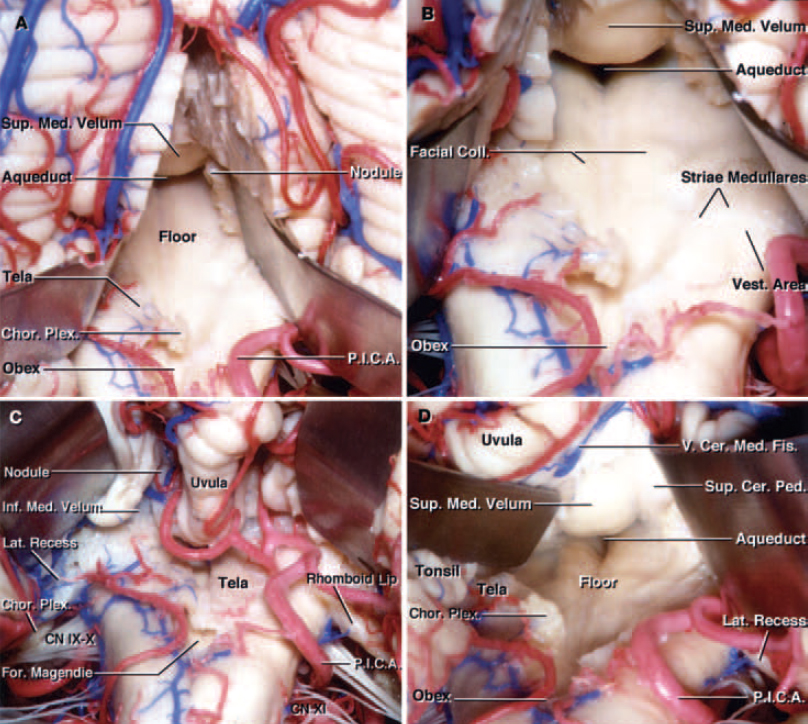 Figure 1: Comparison of the transvermian approach (A and B) that involves transection of the inferior one-third of the vermis. Note the similar exposure through the telovelar approach (C and D). The tonsils have been retracted superolaterally to expose the tela choroidea, inferior medullary velum, and both lateral recesses (C). The telovelar route affords more expanded views of the lateral recesses. (Images courtesy of AL Rhoton, Jr.)

For these reasons, I have abandoned the transvermian route in favor of the telovelar approach for reaching all fourth ventricular lesions. This chapter describes the technical nuances for the telovelar route. 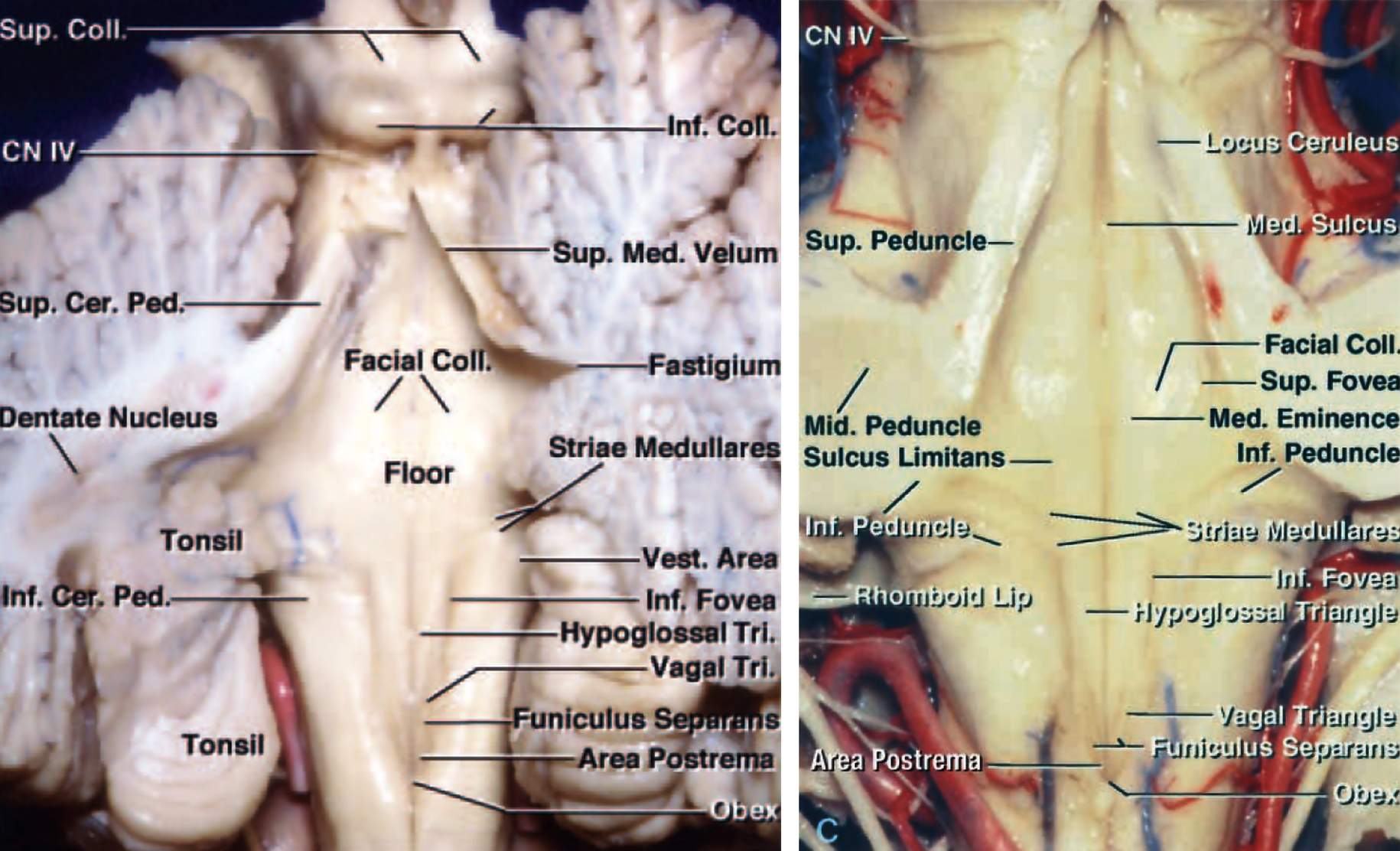 Figure 2: Functional organization of the fourth ventricular floor. Manipulation of the floor is associated with a high risk of facial weakness, diplopia, and swallowing and ventilatory dysfunction. (Images courtesy of AL Rhoton, Jr.)

INDICATIONS FOR THE APPROACH

Lesions with progressive symptoms are candidates for resective surgery. Ependymomas may lead to symptomatic brainstem compression and their intratumoral hemorrhage may cause acute neurologic deterioration. 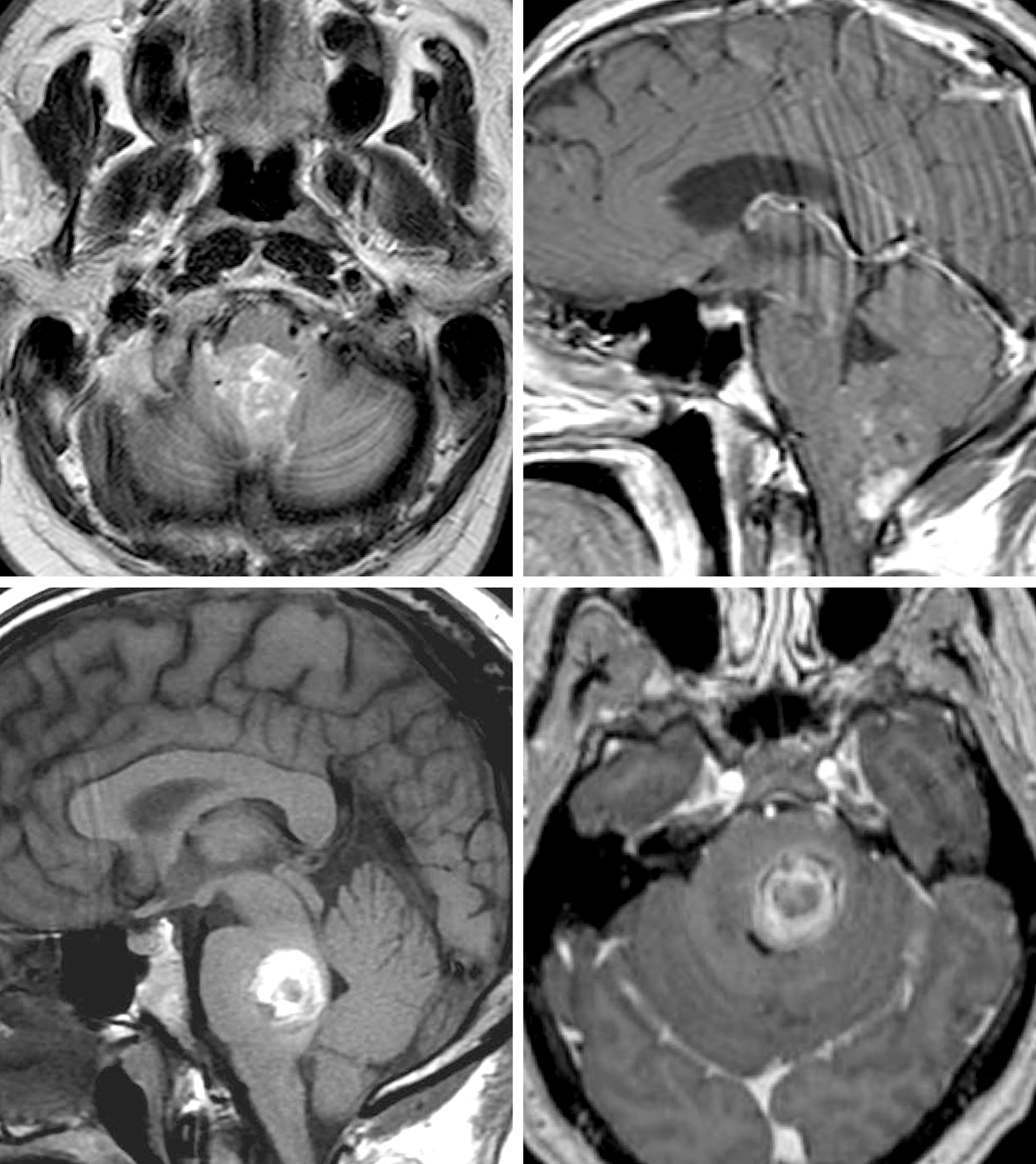 Figure 3: (Upper Left and Right) Fourth ventricular ependymoma with partial enhancement/calcification. The close relationship of this tumor to the floor mandates radical subtotal resection while leaving a small piece of the tumor on the floor. (Lower Left and Right) Pontine cavernous malformations demand mapping of the facial nucleus for its resection. Both lesions were handled through the telovelar route.

The preoperative magnetic resonance images convey important information about the rostral extent of the lesion and the need for a small caudal vermian split or C1 laminectomy in conjunction with the telovelar approach to reach the superior pole of the tumor. It is important to evaluate the invasion of the ventricular floor by the tumor and plan a subtotal radical resection preoperatively so the surgeon can avoid any temptation during surgery to manipulate the tumor that invades the floor.

Aggressive dissection of the tumor invading the floor is associated with high morbidity and significant risks of postoperative swallowing and ventilation dysfunction that would require both a gastrostomy and tracheostomy. I strongly advise against any manipulation of the floor during tumor resection, and a sheet of adherent tumor should be left on the floor. However, manipulation of the floor through electrophysiologic mapping for resection of symptomatic intraparenchymal lesions such as cavernous malformations is reasonable. These considerations should be planned and discussed with the patient before surgery.

Morbidly obese patients may not tolerate the modified park-bench position. In rare circumstances, the sitting position should be considered and preparation for such positioning should be made. If lower preoperative cranial nerve dysfunction is present, the patient should remain intubated immediately after surgery and appropriate ear, nose, and throat consultation obtained before extubation and resumption of feeding.

The posterior inferior cerebellar arteries (PICAs) may be encased by the tumor, especially if the patient is having a repeat operation. Preoperative imaging (T2-weighted sequences) can warn the operator to plan a subtotal resection to protect these vital vessels.

Preoperative evaluation of the magnetic resonance images may demonstrate a patent occipital sinus that could cause brisk bleeding during the dural opening. A hemorrhagic mass with hydrocephalus may require a preoperative external ventricular drain. Aggressive supratentorial ventricular drainage in the face of an acutely expanding large posterior fossa mass may result in upward cerebellar transtentorial herniation and life-threatening brainstem compression.

Lesions occurring within the brainstem parenchyma may necessitate placement of defibrillator pads before surgery.

The fourth ventricle is traditionally described as a tent with the floor facing anteriorly and the sides facing rostral and caudal. The superior part of the roof of the ventricle is comprised of the superior medullary velum and superior cerebellar peduncles. The inferior part of the roof is comprised of the inferior medullary velum, the tela choroidea, uvula, and nodule. The lateral recesses are open to the cerebellopontine angle.

Several important spaces can be seen relative to the tonsils. The vallecula is the space between the medial surfaces of the two tonsils. The cerebellomedullary fissure is defined by the anterior surface of the tonsil and the medulla.

The PICAs are intimately related to the structures involved in this approach. These arteries travel around the tonsils and through the inferior part of the roof of the ventricle. They then turn away from the roof and into the fissures between the hemispheres, tonsils, and vermis.

A standard midline suboccipital craniotomy is performed. The craniotomy is typically narrower than the one for hemispheric lesions and somewhat resembles the craniectomy for Chiari decompression. It exposes the medial quarter to half of the hemispheres laterally. The foramen magnum is removed inferiorly. The transverse sinuses do not need to be exposed during this approach.

If the lesion extends into the aqueduct and laterally into the recesses, removal of the C1 arch can facilitate visualization of these regions through an expanded inferior-to-superior operative trajectory. 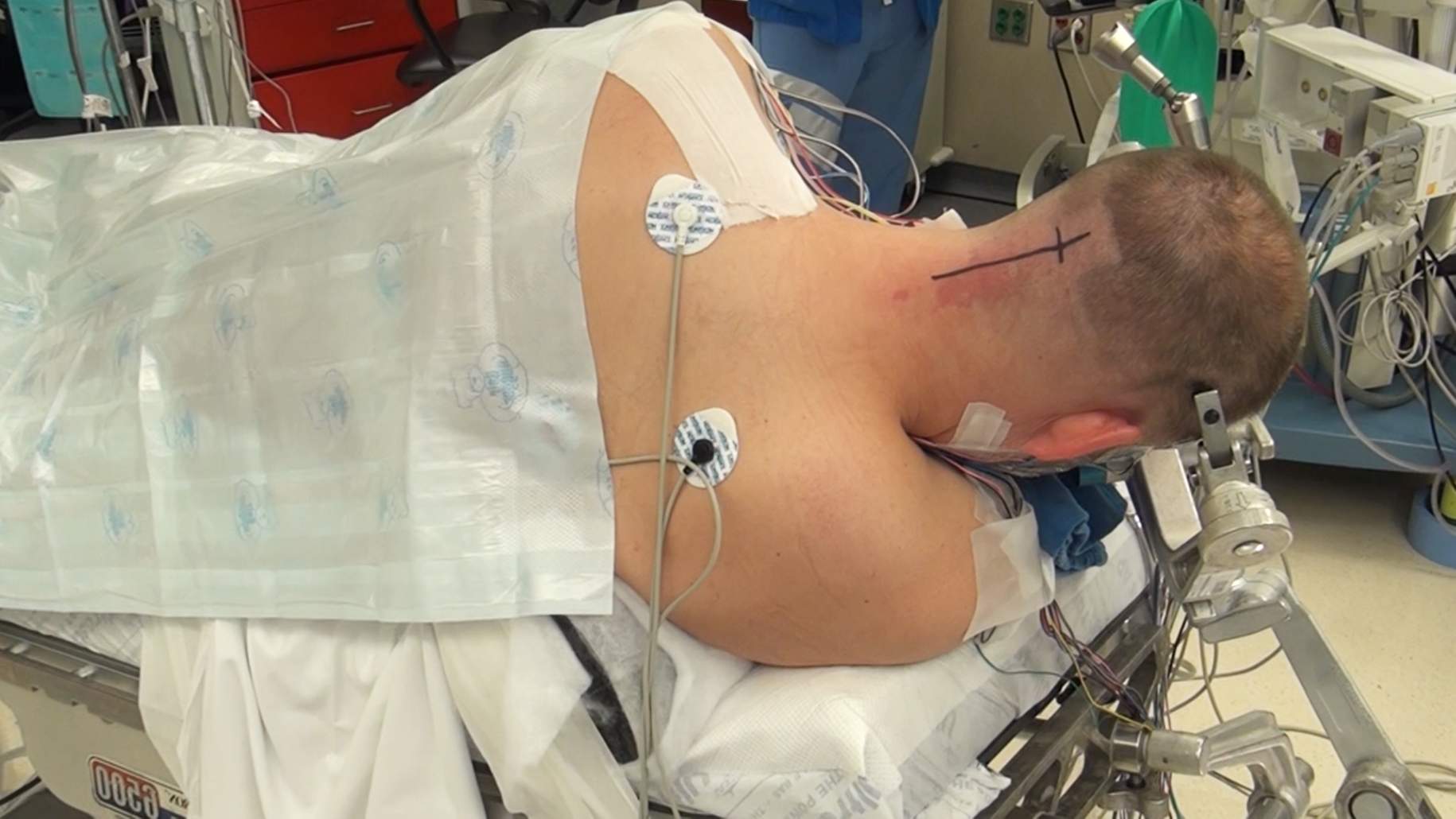 Figure 6: This patient is in a modified park-bench position with his head flexed and turned toward the floor. This neck posture expands the space along the craniocervical junction. A linear incision is used. The short horizontal line marks the location of the transverse sinuses. Note that the patient’s shoulder is mobilized inferiorly and anteriorly. This important maneuver increases the surgeon’s working space within the suboccipital area. The lateral position uses gravity retraction and the blood runs out of the operative field. This position also allows the surgeon to sit during microsurgery. 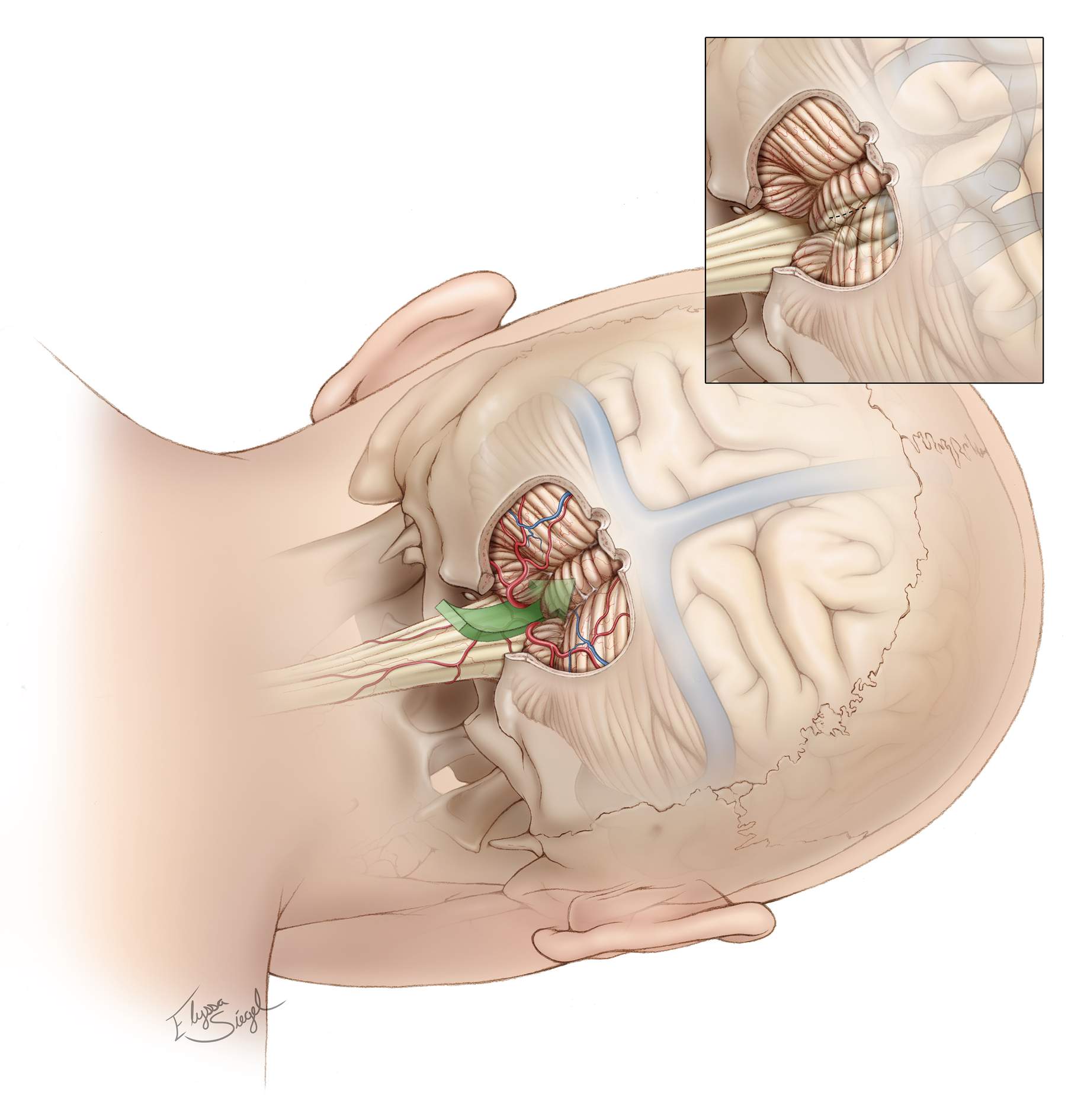 Figure 7: The trajectory of operative dissection for the telovelar approach. Note that the foramen magnum was unroofed. Notice that the burr holes are placed on either side of the midline keel. The tonsils, vermis, and medial aspect of the hemispheres are exposed. Occasionally a patent occipital sinus may cause brisk bleeding if it is not anticipated.

Figure 8: The bony opening is demonstrated. The posterior arch of the foramen magnum is generously removed (arrows) and the craniocervical ligament resected. The C1 laminae (its tubercle is marked with *) are not removed in this case. 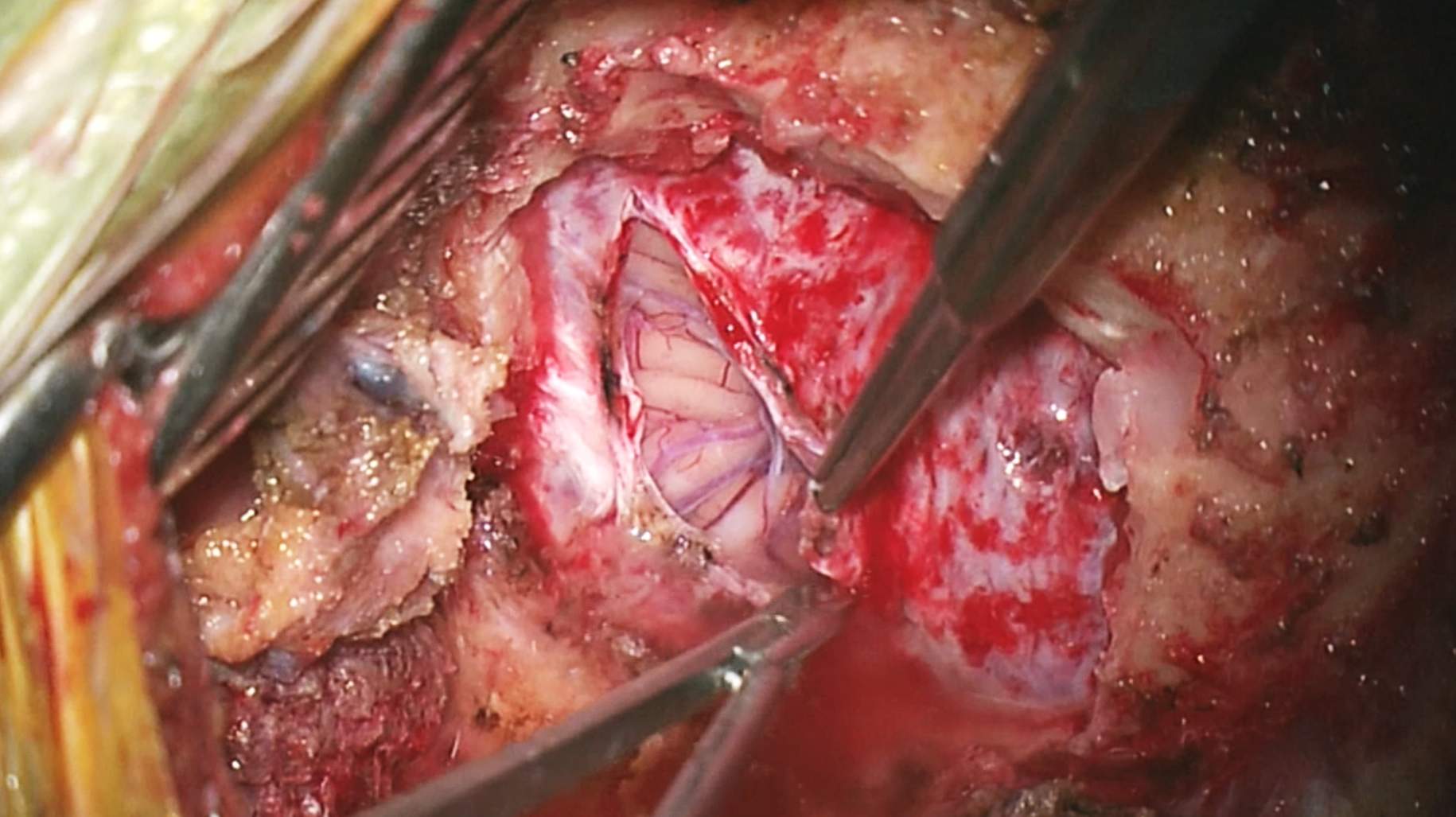 Figure 9: The dura is incised in a curvilinear fashion and tacked up superiorly. 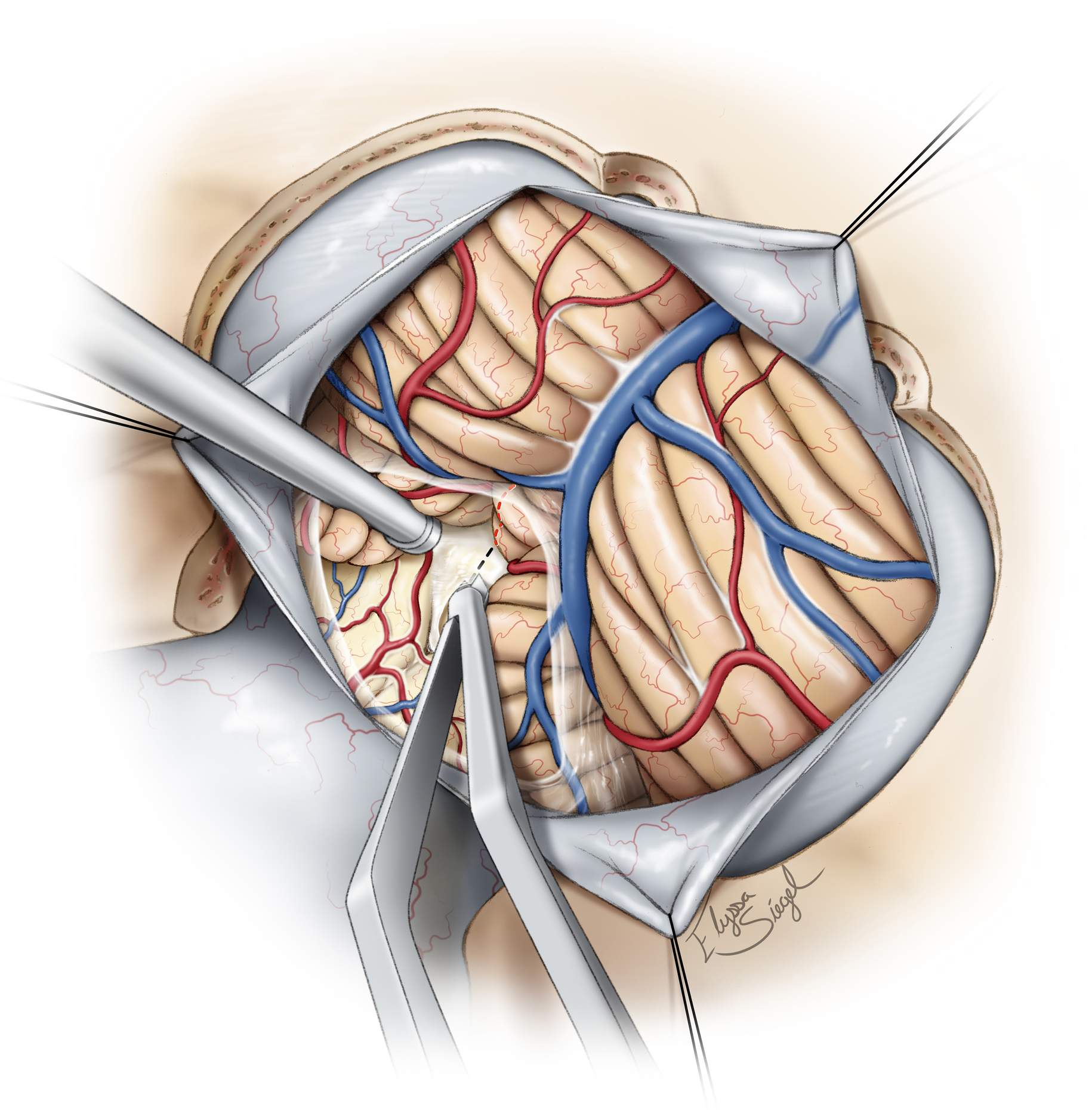 Figure 10: After exposure of the inferior cerebellar surface and upper brainstem, the uvulotonsillar and medullotonsillar spaces are dissected open. The dissection plane between the medial edge of the tonsil and the adjacent edge of the uvula is developed. The medial surface of the tonsil is then retracted supralaterally and the uvula is retracted supramedially to expose the tela choroidea and inferior medullary velum. Dynamic retraction is used to expand the uvulotonsillar space.

Microscissors are used to prevent blunt dissection and protect the PICA branches. This exposure is often attained without sacrificing the vermis, but minor transection of the vermis (red hashed line) may be occasionally necessary if the dissection planes along the cerebellomedullary fissure and uvulotonsillar spaces are adherent. Next, the tela choroidea and inferior medullary velum are coagulated and divided. 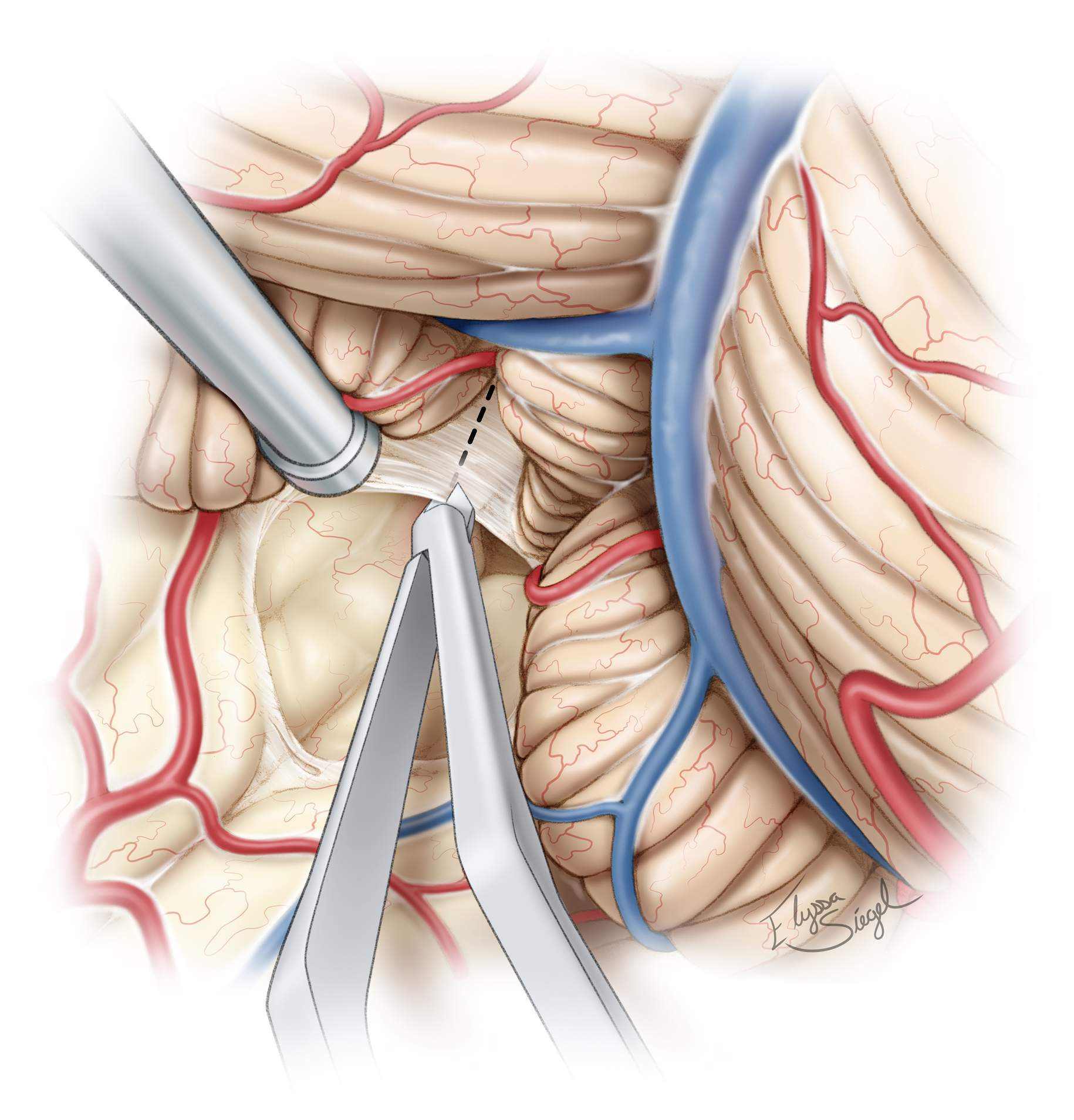 Figure 11: The inferior medullary velum is further divided (black hashed line) to access the fourth ventricular floor and lateral recesses. Unroofing of the foramen magnum is required to gain the proper trajectory. Removal of the C1 arch improves visualization of the rostral half of the fourth ventricle, rivaling that of the transvermian approach.

Figure 12: Retractors are often necessary to immobilize the vermis medially (arrow). Generous exposure of the floor of the fourth ventricle (*) is possible. The floor is lightly discolored in this case due to the presence of an underlying large cavernous malformation (see Figure 3, bottom images). 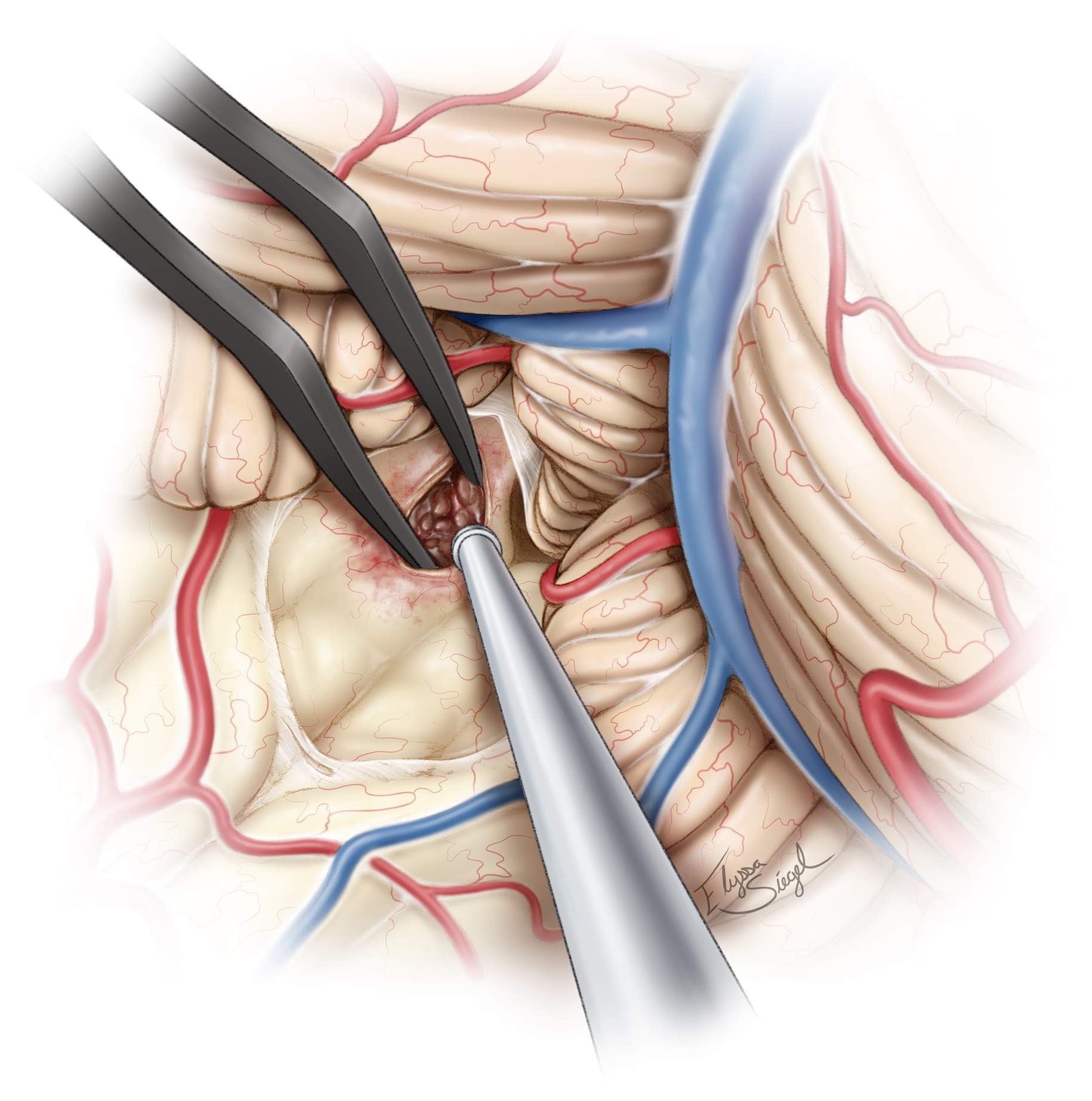 Figure 13: After exposure of the floor, microsurgical resection of the underlying pathology (cavernous malformation or intraventricular tumor) can begin.

The patient is observed in the intensive care unit at least overnight with stringent blood pressure control. The patient may require a standing order for antiemetic medications for the first few postoperative days because intense nausea is not uncommon following surgery near the floor of the fourth ventricle.

Preoperative compromised swallowing requires a careful swallowing evaluation before eating can be resumed postoperatively in order to avoid the risk of aspiration pneumonia. The risks of aseptic meningitis or pseudomeningocele formation are significant in these cases.