There are no pathologic or genetic features specific to lateral and middle sphenoid wing meningiomas, although World Health Organization (WHO) class II and III meningiomas are less common in this region of the brain than over the convexities.

Globular tumors are relatively straightforward and can be transformed into convexity tumors after resection of the lateral sphenoid wing. However, spheno-orbital tumors are more technically challenging because expansile osteotomy is necessary to remove a reasonable portion of the tumor-infiltrated bone and correct the proptosis. Intraorbital extension of these tumors is not uncommon.

Large tumors causing temporal lobe edema may result in focal, complex-partial, or generalized tonic-clonic seizures including gustatory and olfactory hallucinations. Neuropsychological disturbances often exist, but are apparent only to patients and their families in retrospect. These lesions may also be found during diagnostic tests for headaches, vertigo, or other unrelated complaints.

Thin-cut magnetic resonance (MR) images including the fat suppression sequences through the orbits assess the extent of orbital involvement. Computed tomography (CT) with bone windows and thin slices measures the extent of bone invasion or hyperostosis. Consultation with our oculoplastic colleagues is very helpful for baseline evaluation of vision and proptosis. Preoperative preparation of a custom implant to reconstruct the walls of the orbit and lateral calvarium after resection of large areas of affected bone may be needed.

The T2-weighted MR images are also essential for identifying vasculature and intraparenchymal edema. Preoperative embolization is usually not helpful for lateral sphenoid wing meningiomas because the craniotomy typically allows for devascularization of the blood supply (primarily from the middle meningeal artery) early during surgery. 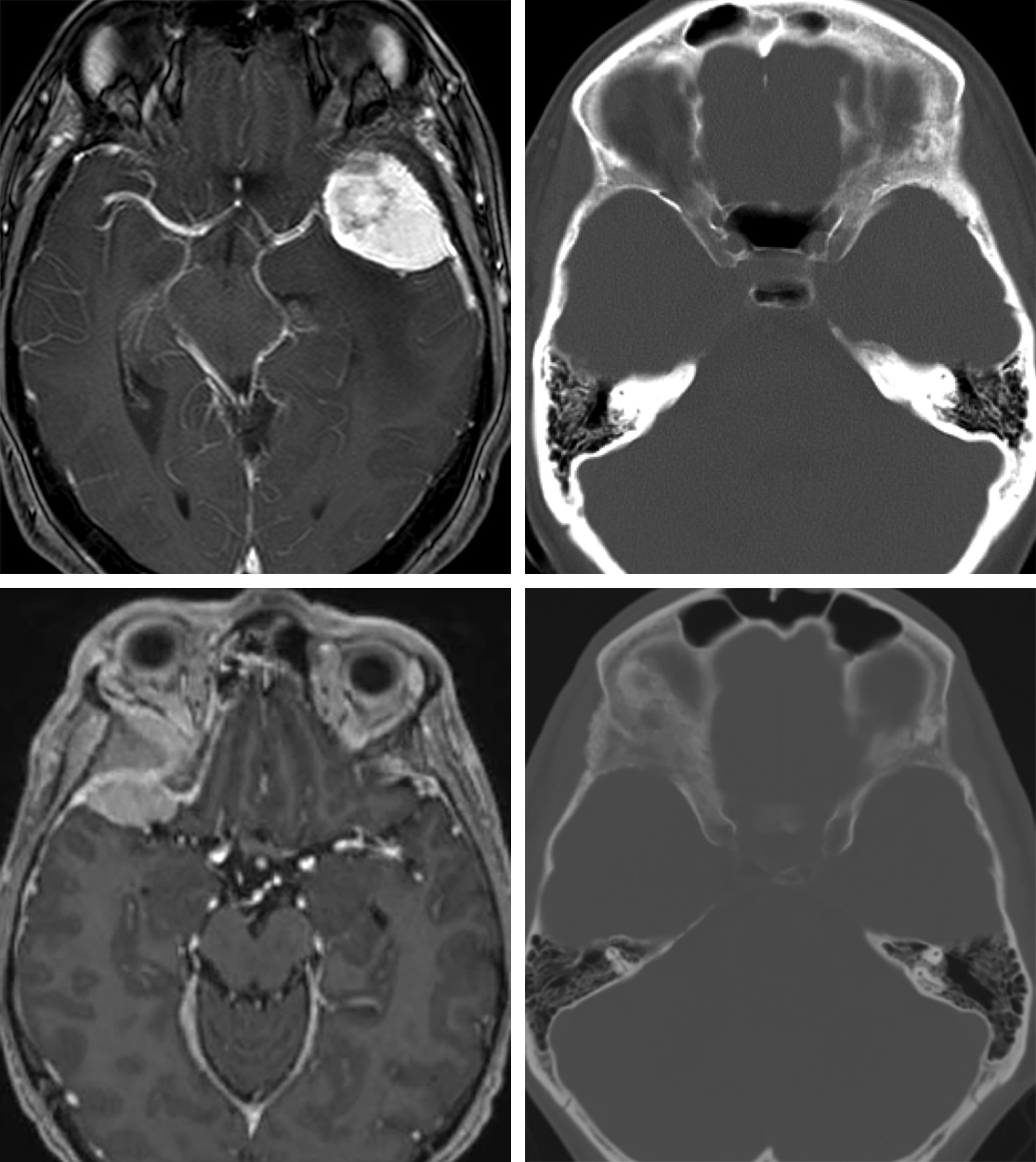 Figure 1: A classic left-sided lateral sphenoid wing meningioma with sphenoid wing hyperostosis (top images) is shown. A right-sided spheno-orbital meningioma (bottom images) with significant hyperostosis of the sphenoid wing, including the clinoid and orbital walls, causing proptosis, is also demonstrated. The resection of both the intradural tumor and hyperostotic bone is necessary for achieving long-term tumor control and correction of the proptosis.

Lateral sphenoid wing hyperostosis and tumor extension into the orbit leads to proptosis and vision deterioration. These latter symptoms are clear indications for operative intervention. Hyperstosis may also cause optic nerve compression at its foramen. As is the case with other meningiomas, mass effect, intracerebral edema, and associated symptoms such as seizures, cognitive impairment, and speech difficulties are other indications for intervention.

Figure 2: A left-sided lateral sphenoid wing meningioma and its rextent of bony involvement is noted. The clinoid process is often spared in these tumors. Adequate resection mandates maximal removal of the affected bone.

Surgical resection is the mainstay of treatment for lateral sphenoid wing meningiomas, and the goal of surgery is complete removal of the tumor with wide excision of the affected bone and dura, minimizing the risk for future tumor recurrence.

Large and multicompartmental tumors with involvement of the superior orbital fissure or cavernous sinus may not be curable in this manner. Stereotactic radiosurgery may be employed for small residual or recurrent growing tumors, especially for portions of the tumor invading the cavernous sinus.

As mentioned previously, a custom cranial implant is prepared preoperatively to minimize the risk of significant postoperative cosmetic deformity after resection of a large portion of the calvarium and orbit affected by the hyperostosing tumor.

I prefer the use of a lumbar drain for dural decompression and unobstructed extradural osteotomy. Cerebrospinal fluid (CSF) drainage facilitates dural and brain mobilization and prevents their injury during the drilling process.

The anatomy of the sphenoid bone is briefly described below.

Figure 3: The anatomy of the sphenoid wing and clinoid process in the coronal planes as it relates to lateral and middle sphenoid wing meningiomas (images courtesy of AL Rhoton, Jr). 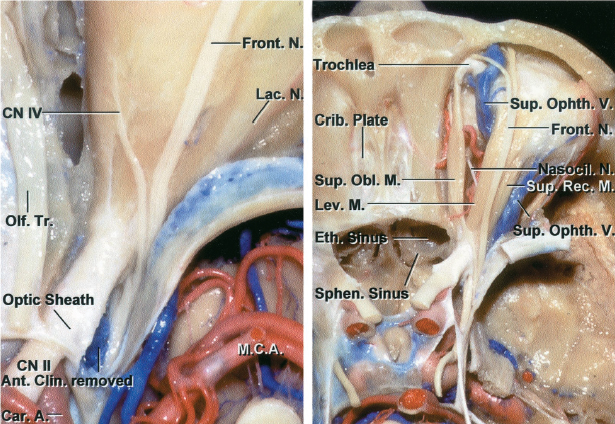 Figure 4: The anatomy of soft tissues around the sphenoid bone relevant to removal of spheno-orbital meningiomas. Note the location of the frontal nerve, levator, and superior rectus muscles. Many lateral and middle sphenoid wing meningiomas invade the superior orbital fissure and preclude their gross total resection (images courtesy of AL Rhoton, Jr).

The patient is placed in the supine position with his or her head turned and immobilized in a skull clamp approximately 40 degrees away from the side of the approach. The use of prophylactic perioperative anticonvulsant medications is controversial, but I prefer to give a loading dose prior to surgery and continue the medication for 7 days postoperatively if pial invasion by the tumor is evident.

If the patient demonstrates any seizure activity preoperatively or during the postoperative time, the dose can be increased, and the duration lengthened to 6 month to 1 year. Tumors with no or minimal intradural extension do not require the use of anticonvulsant medications.

Lateral and middle sphenoid wing meningiomas are resected through the pterional craniotomy. Neuronavigation (using MR and CT) guides the size of the craniotomy based on the extent of dural infiltration by the tumor. A sincere attempt should be made to resect the tumor’s dural tails. Since the dura is heavily infiltrated in these tumors, a generous piece of pericranium is harvested beyond the scalp edges during exposure and used to reconstruct the defect in the dura at the end of the procedure.

I also use a lumbar drain intraoperatively to assist with brain decompression and cortical dissection. Since the basal cisterns are not accessed until the last steps of the procedure, CSF drainage through the lumbar drain significantly assists with brain relaxation, making handling of the tumor and extradural drilling of the bone (especially in the case of spheno-orbital tumors) safe while avoiding frontotemporal lobar retraction. 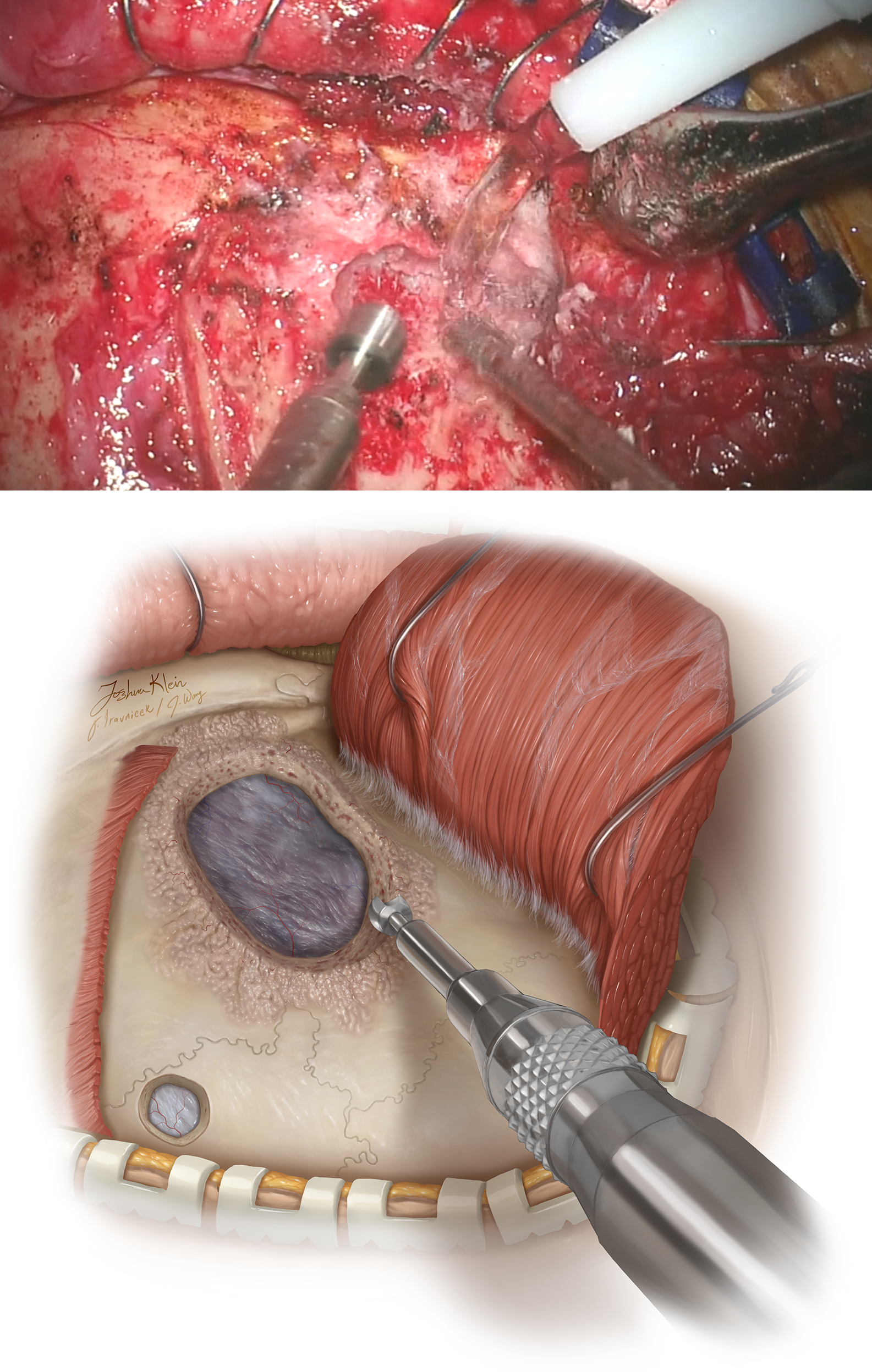 Figure 5: Following reflection of the myocutaneous flap, I use a large burr to drill the hyperostotic calvarium that is centered over the pterion; a craniotomy is not performed initially (top image, right-sided approach corresponding to the lower images in Figure 1). Alternatively, multiple burr holes may be placed at the periphery of the tumor-infiltrated bone; these holes are then connected using the craniotome. The hyperostotic bone is highly vascular and its elevation in one piece will often lead to excessive bleeding. In addition, the tumor-infiltrated bone and dura are adherent to each other, and elevation of the bone flap in one piece leads to avulsion injury to the cortex. 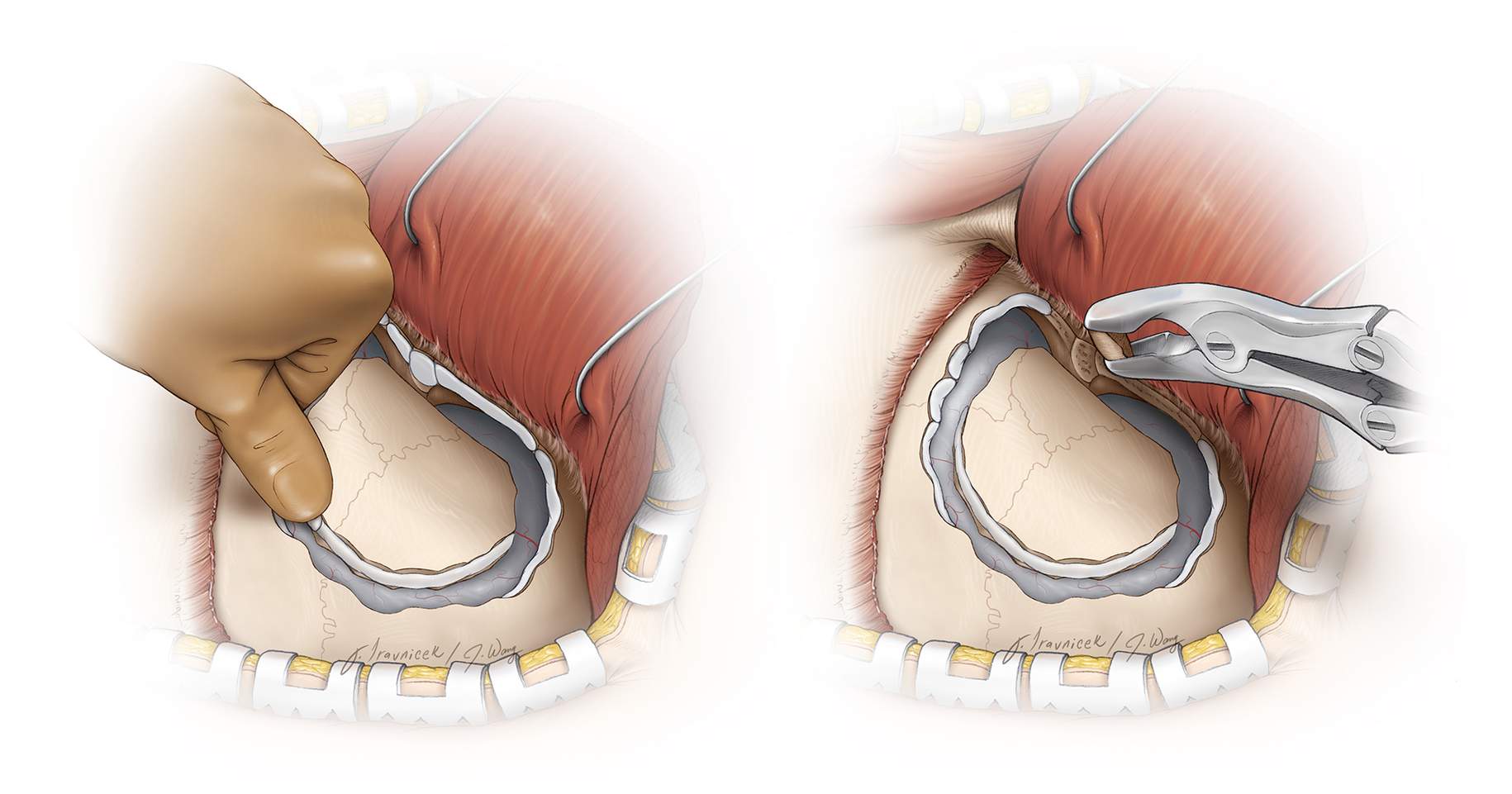 Figure 6: If the tumor is enplaque and intradiploic, as each burr hole is created in the periphery of the tumor-infiltrated calvarium, bone wax is used to control bleeding from the thick cancellous bone (left image). Rongeurs may be used to remove the thickest portion of the bone at the pterion and the lateral aspect of the sphenoid wing (right image). The enlarged middle meningeal arteries feeding the tumor should be coagulated. 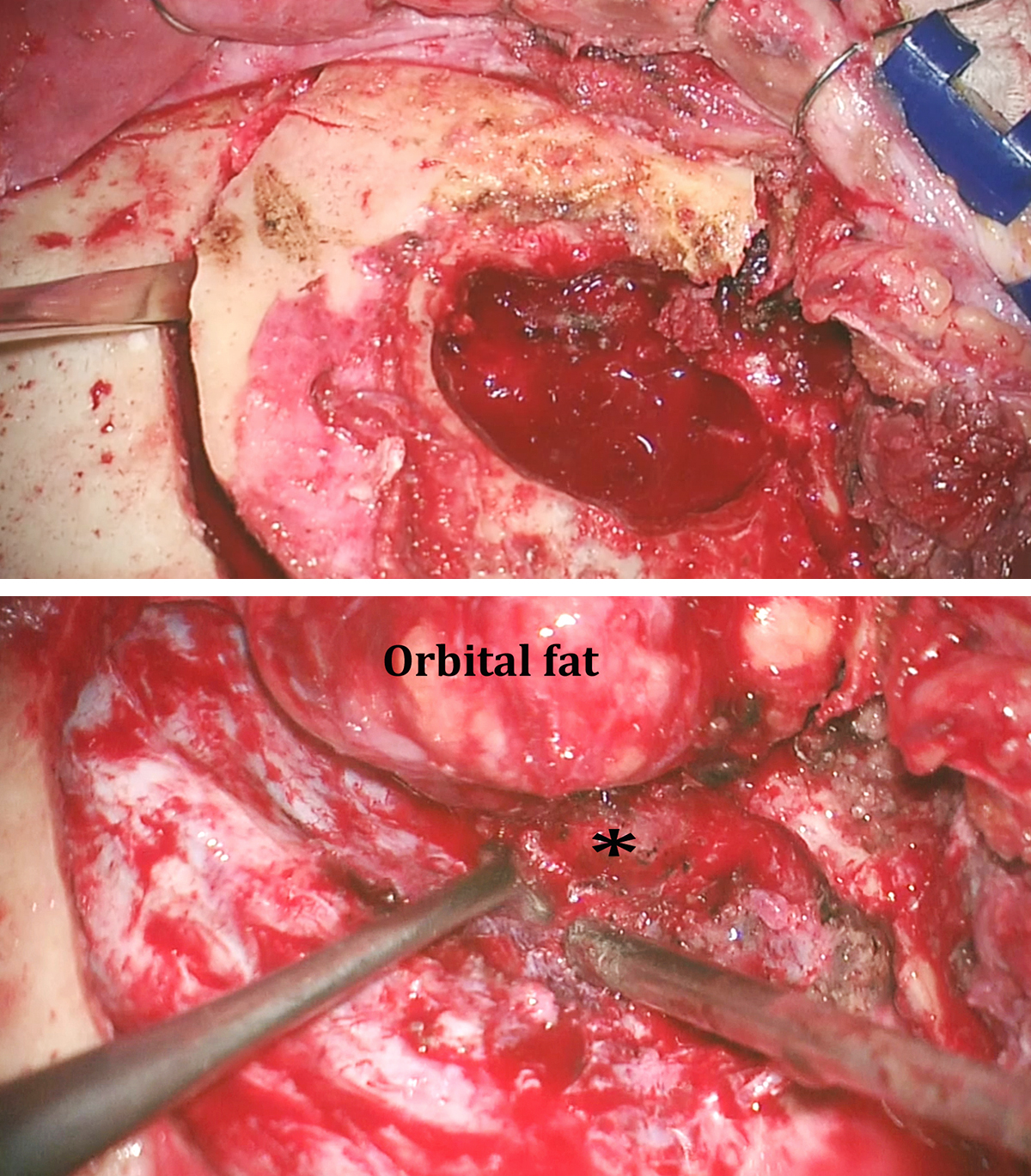 Figure 7: After the pterion and the affected island of bone are drilled away, the normal edges of the bone and dura are exposed. Next, an orbitozygomatic craniotomy is completed (top image), and the affected medial sphenoid wing (*) is isolated using a #1 Penfield dissector (bottom image). This bone is drilled away using a small side-cutting burr. 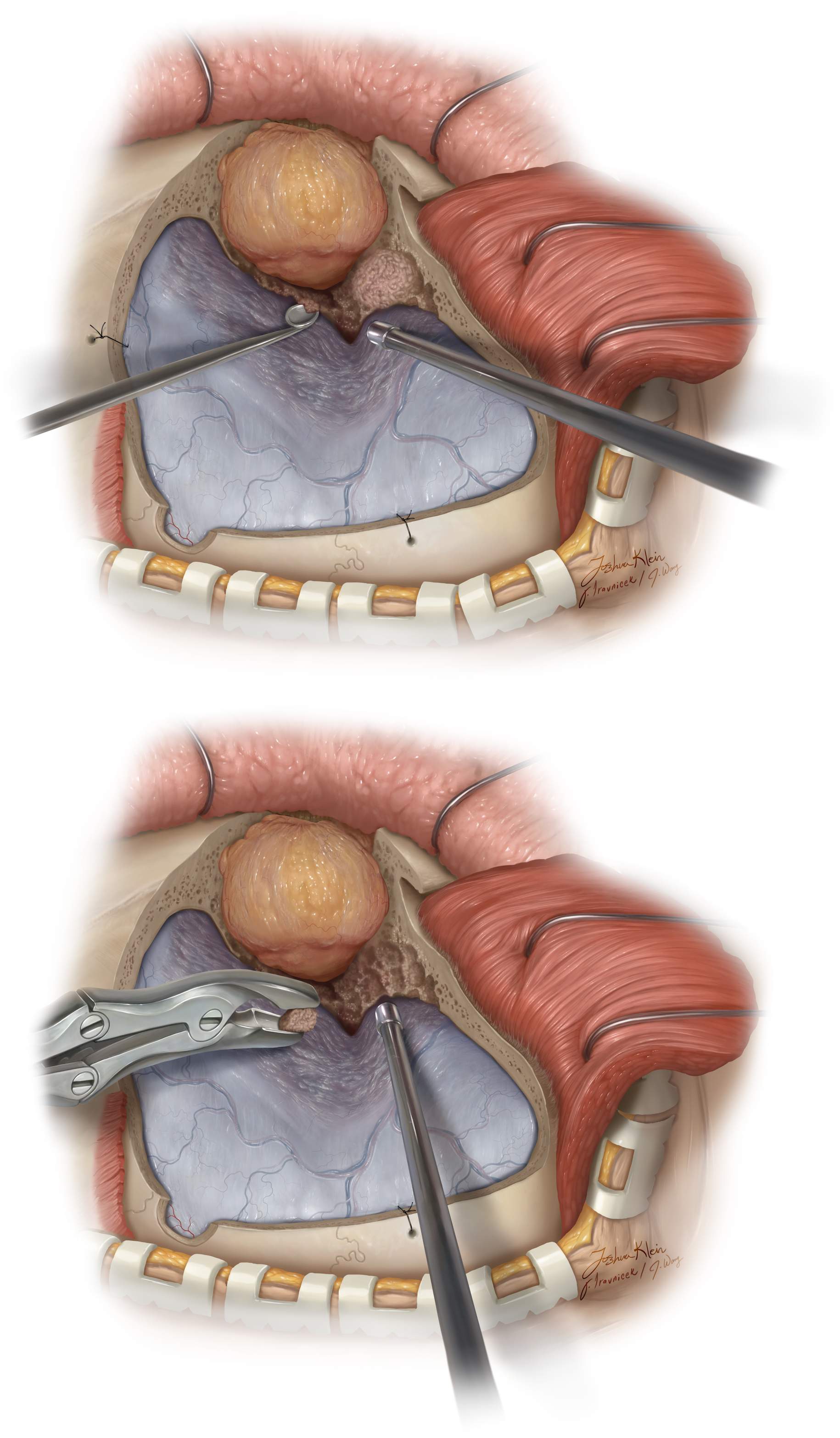 Figure 8: The affected/infiltrated bone which is relatively soft along the roof of the orbit and medial sphenoid wing is removed via curettes and fine rongeurs. If the periorbita is also infiltrated, it will be removed at this stage of operation. Figure 9: A clinoidectomy may be needed for complete resection of the affected bone. The superior orbital fissure and optic canal are shown. The bottom image illustrates the underlying intradural structures at risk during this stage of the operation. 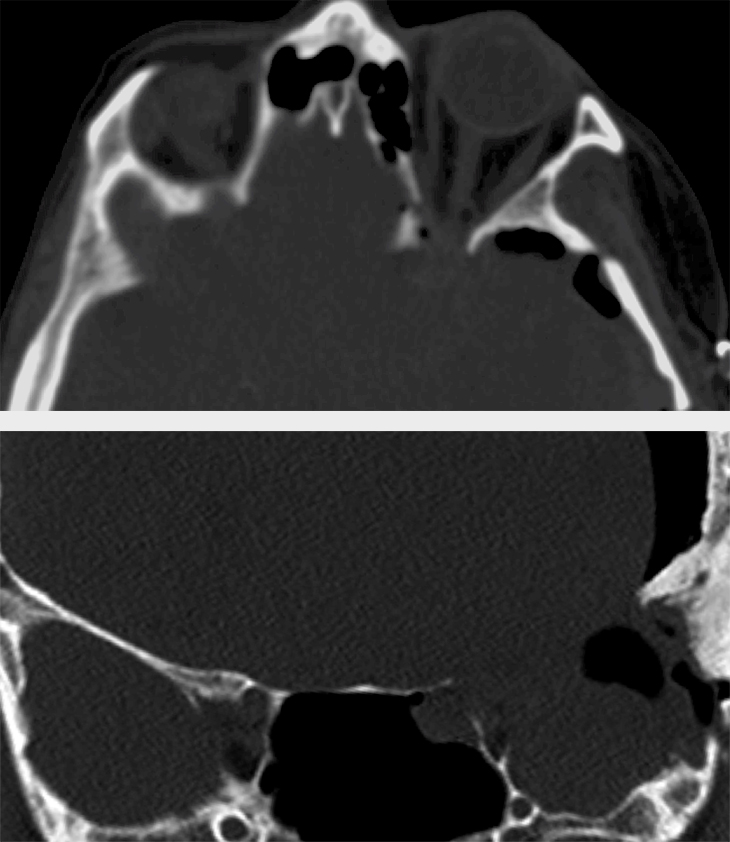 Figure 10: Aggressive elevation of the orbitozygomatic or pterional bone flap without its complete disconnection under direct vision along the orbital roof or lateral sphenoid wing should be avoided. Attempts to elevate the bone flap for the tumor in the top images in Figure 1 led to an inadvertent extension of the fracture along the sphenoid wing into the optic canal (top image) and ethmoid sinus (bottom image) with resultant optic nerve injury and unrecognized postoperative CSF leak. 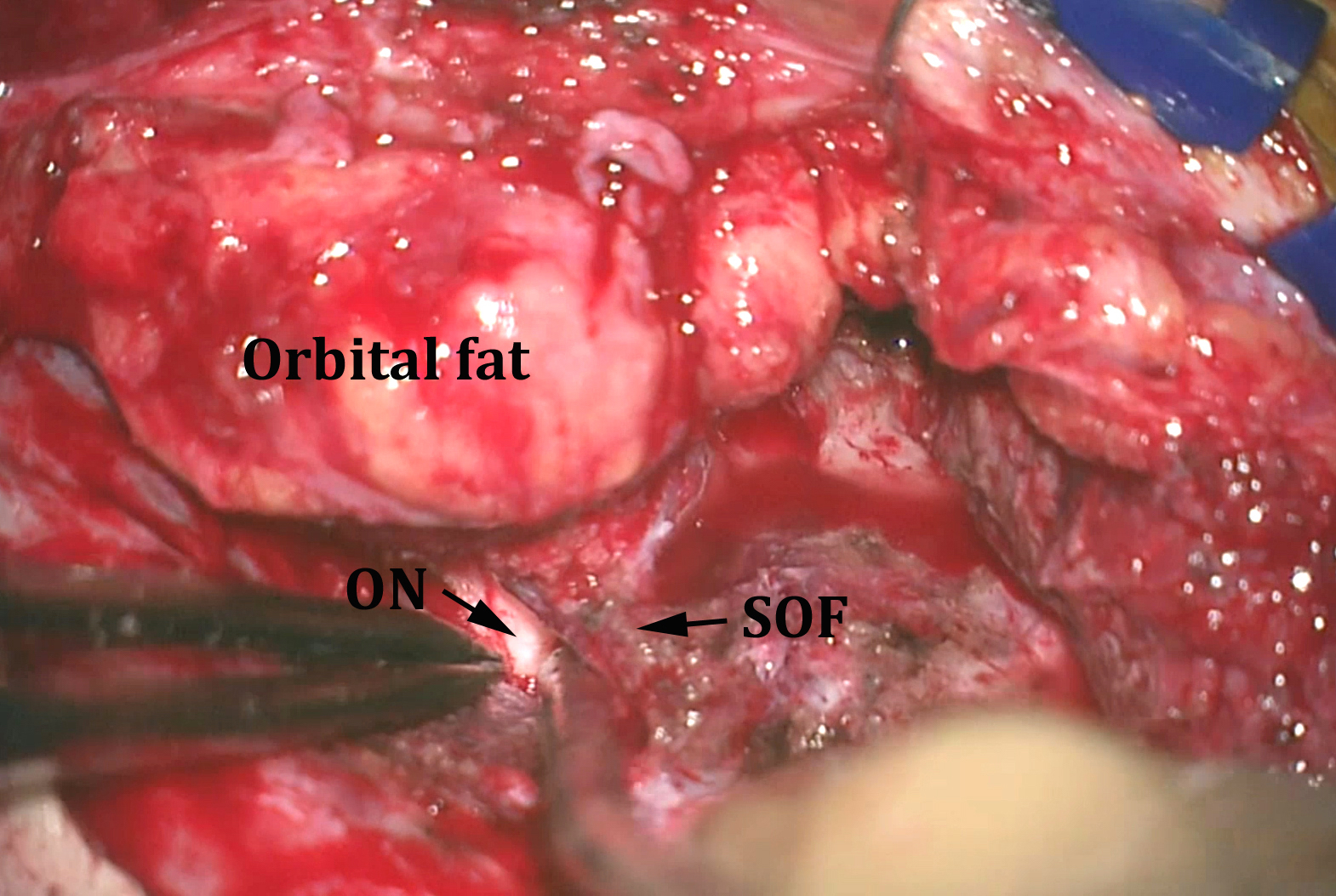 Figure 11: After removal of the medial sphenoid wing and extradural clinoidectomy, the superior orbital fissure (SOF) and optic nerve (ON) are identified. At this stage, bony resection is guided by intraoperative CT navigation. If the tumor extends into the orbit, the superior and lateral walls of the orbit are removed further and the intraorbital extension of the tumor is excised. An implant is needed to reconstruct part of the orbital walls at the end of the procedure to avoid delayed endophthalmus.

Removal of the intradural component(s) of the tumor is conducted using the same techniques as those for convexity meningiomas. 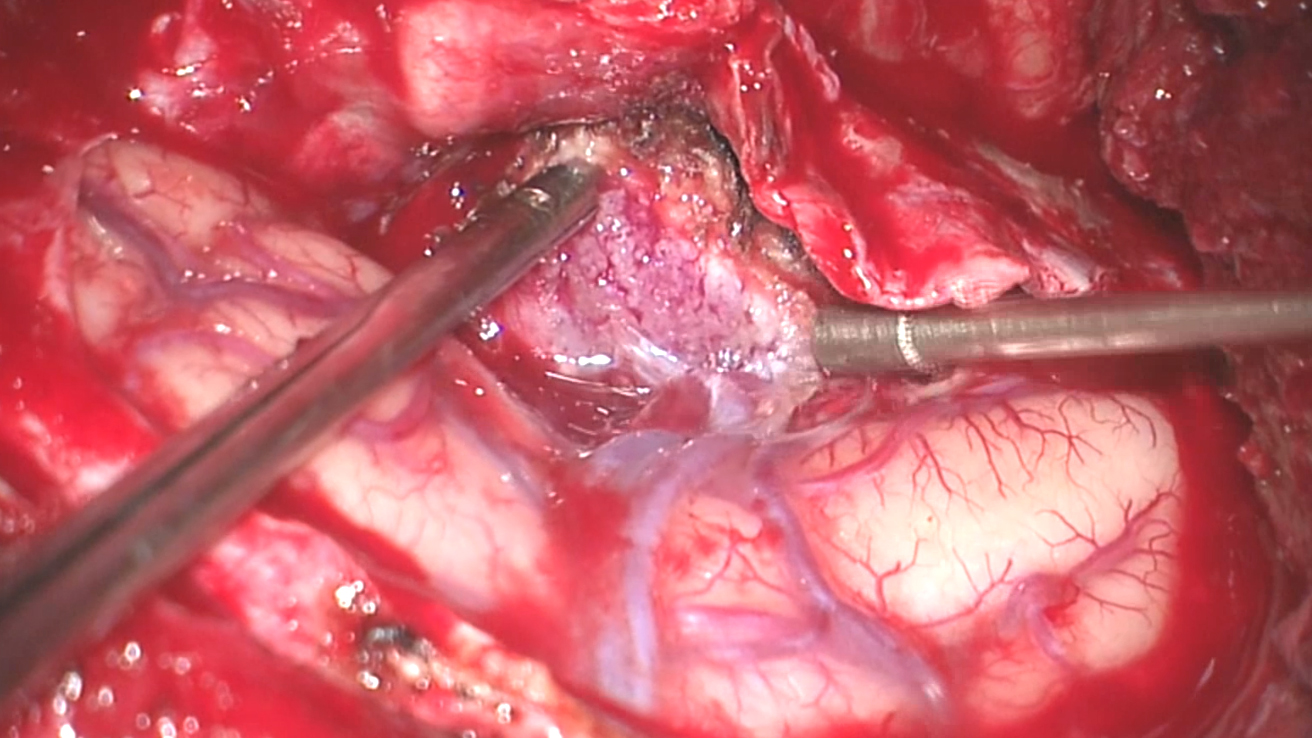 Figure 12: The dura is then incised sharply while the operator protects the brain, and the dural edges are coagulated using bipolar electrocautery. If the dural tails of the tumor extend beyond the initial bony exposure, the craniotomy is expanded to ensure the infiltrated dura has been generously exposed and resected. MR navigation can guide the operator regarding the extent of dural resection. The intradural component of this spheno-orbital meningioma reached into the anterior Sylvian fissure. Figure 13: The intradural portion of the tumor is removed using standard techniques. Most such tumors carry an intradural component that may displace Sylvian vessels.

The intradural tumor is devascularized along its dural base. Dissection of the tumor from the surrounding brain is carried out circumferentially, while the operator places cottonoid patties at the periphery of the tumor and mobilizes the decompressed tumor away from the brain.

At this point, it is important to identify and preserve the distal branches (M3 and M4) of the middle cerebral artery. These branches, along with the main middle cerebral artery trunk, may be encased in the tumor, but usually a dividing arachnoid plane is present and there is no invasion of the arterial wall.

Once the tumor is completely dissected and removed, any remaining nodules or tumor-infiltrated dura are excised. Most of the affected dura is resected, however, the affected dura at the level of the superior orbital fissure and the cavernous sinus should be left intact.

Some meningiomas may infiltrate the dura and bone extensively. 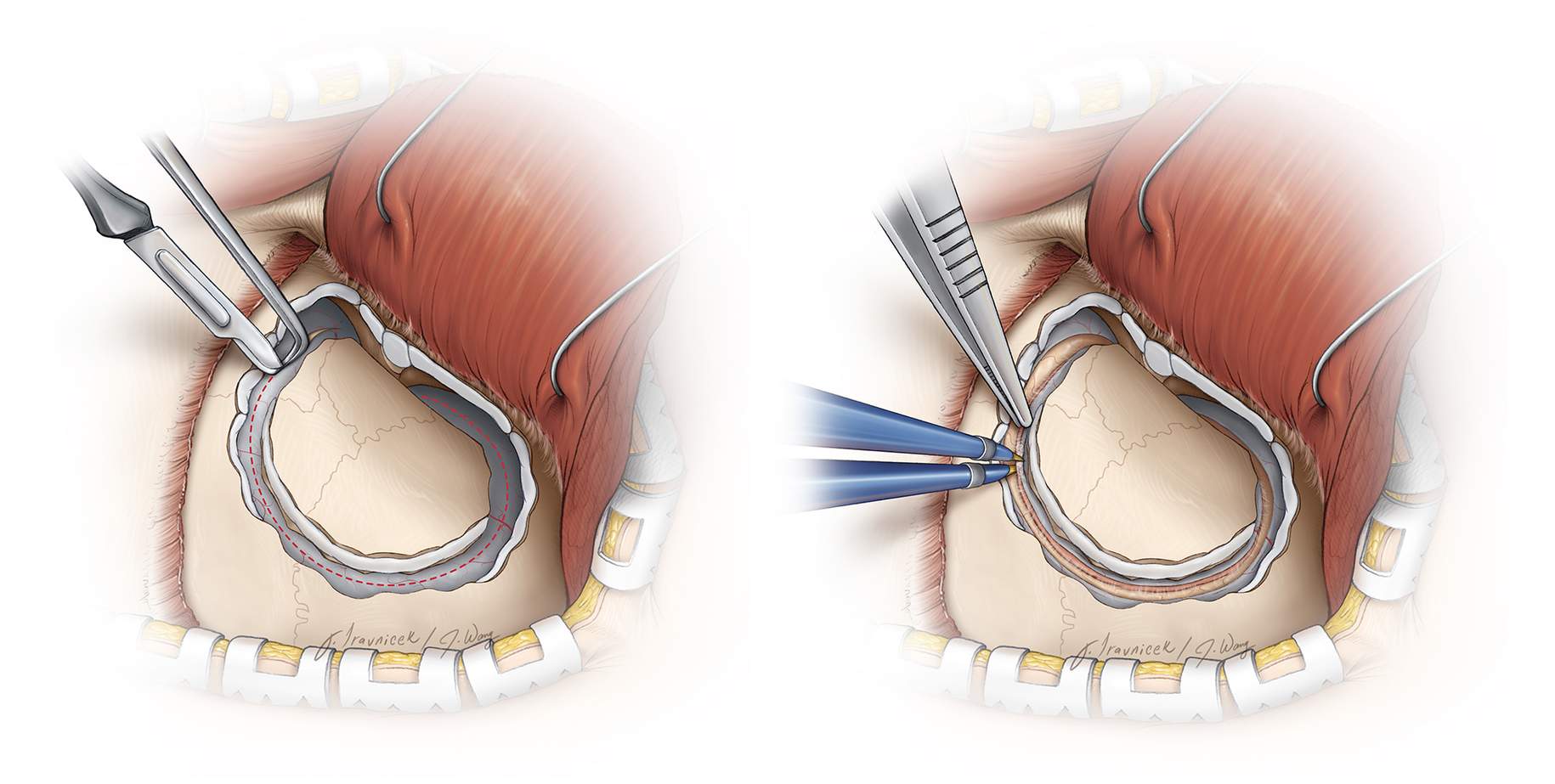 Figure 14: If the tumor has dramatically invaded the cortex, dura, and bone, the latter two layers may have to be removed en bloc, if the tumor is primarily affecting the lateral sphenoid wing. To do so, the bone is not elevated until the dura is cut along the bony margins and the underlying attached tumor dissected away from the brain. This maneuver is appropriate for small and superficial tumors. 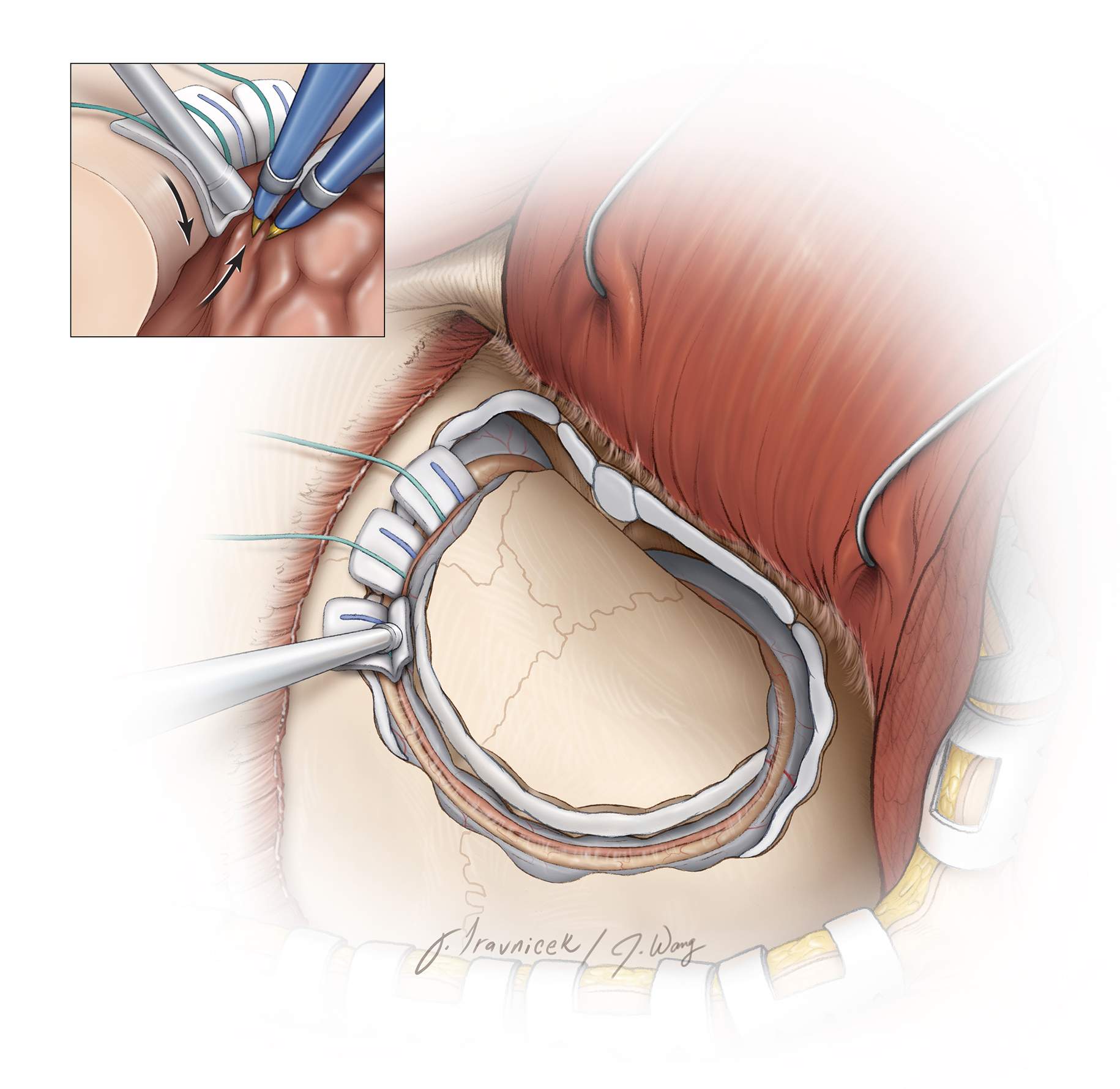 Figure 15: The tumor is dissected away as the operator uses cottonoid patties to “wipe the brain away” from the tumor (inset image). 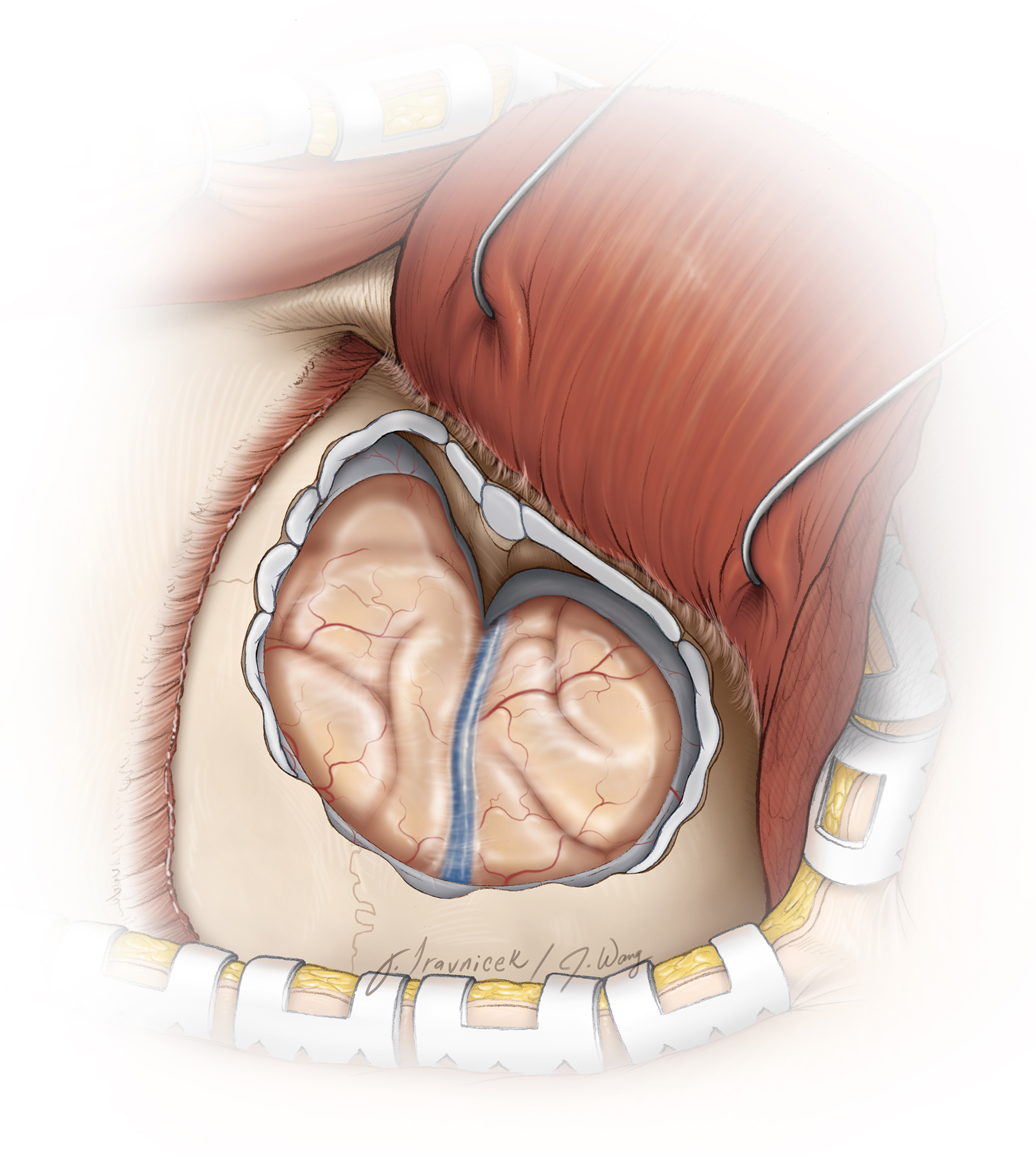 Figure 16: Gross total resection is possible through elevation of all of the tumor-infiltrated tissues.

The pericranial graft harvested at the beginning of the procedure is placed over the dural defect and sewn in place. 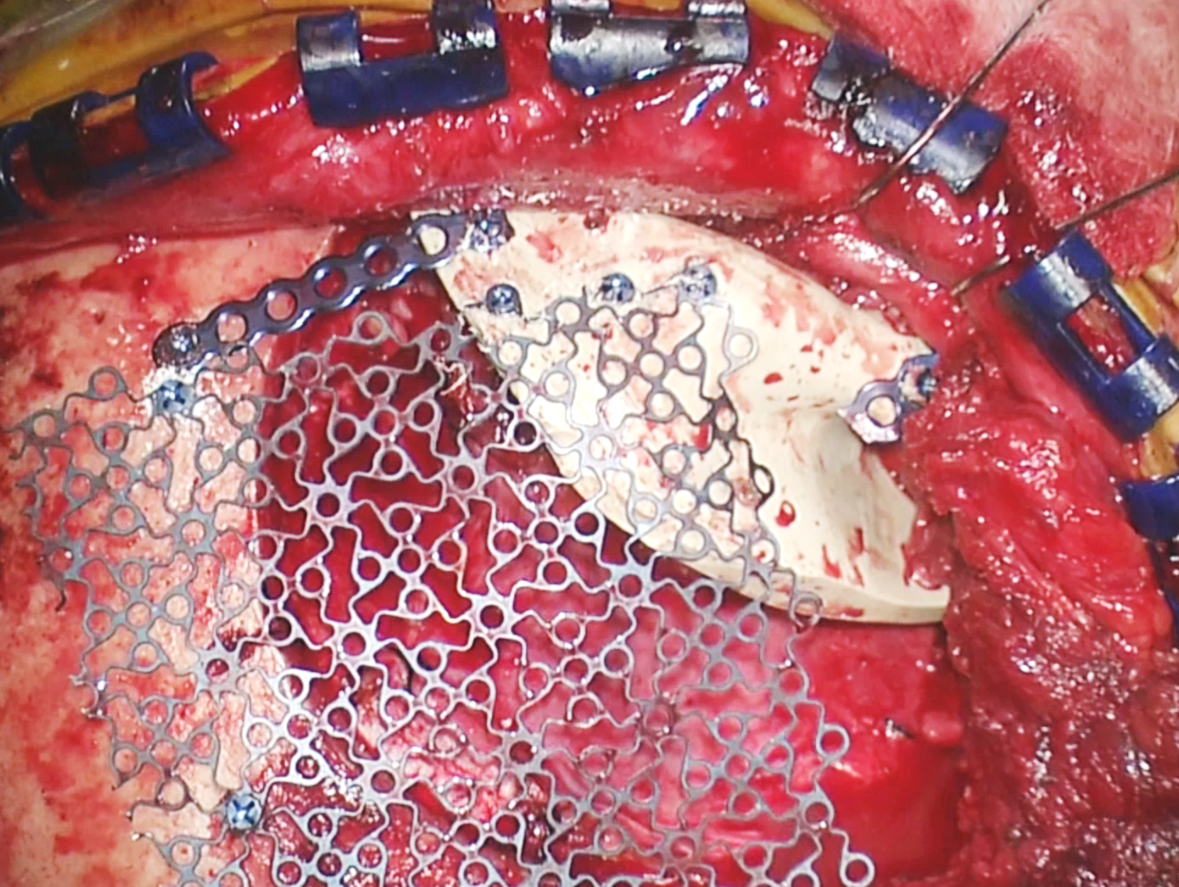 Figure 17: A custom implant is used to reconstruct the orbital rim and part of the orbital walls without compromising the movement of eye muscles. Cranioplasty using titanium mesh repairs the remaining defect in the calvarium. The tumor-infiltrated bone flap is not replaced.