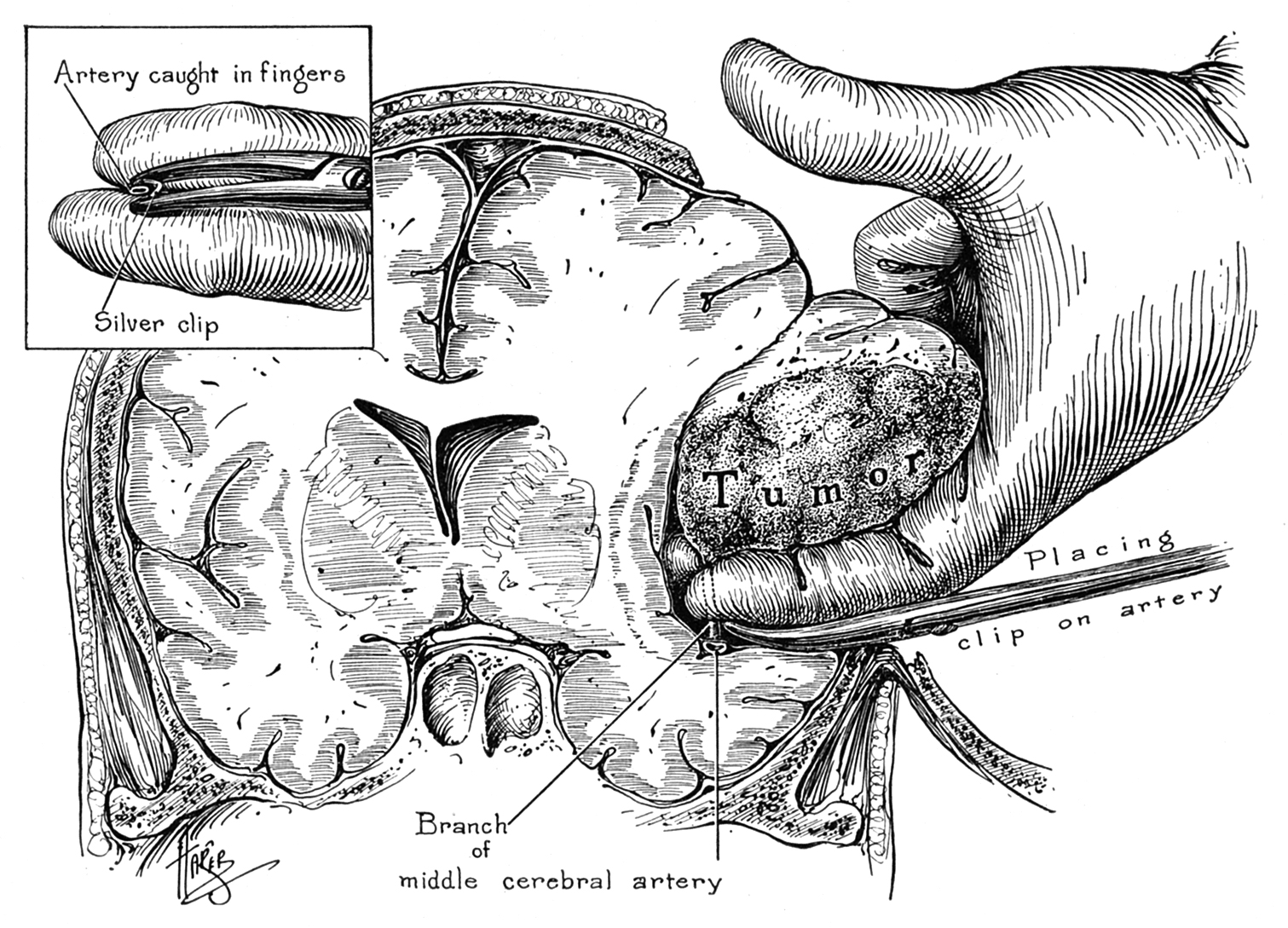 Figure 1: Walter Dandy demonstrates resection of an extra-axial tumor and specifically the clipping of a deep feeding artery (Dandy WE. The Brain. W.F. Prior Company. Hagerstown, Maryland, 1966.)

Convexity meningiomas develop from the leptomeninges of the cerebral convexities over all lobes of the brain and represent 15-20% of intracranial meningiomas. Due to their accessible location, distance from the skull base and the dural venous sinuses, they offer the greatest potential to achieve their radical gross total resection. Their excision should encompass a wide dural margin and the involved bone, especially for young patients, to decrease the risk of tumor recurrence.

Similarly, convexity meningiomas were among the earliest accessible surgical targets in our profession. 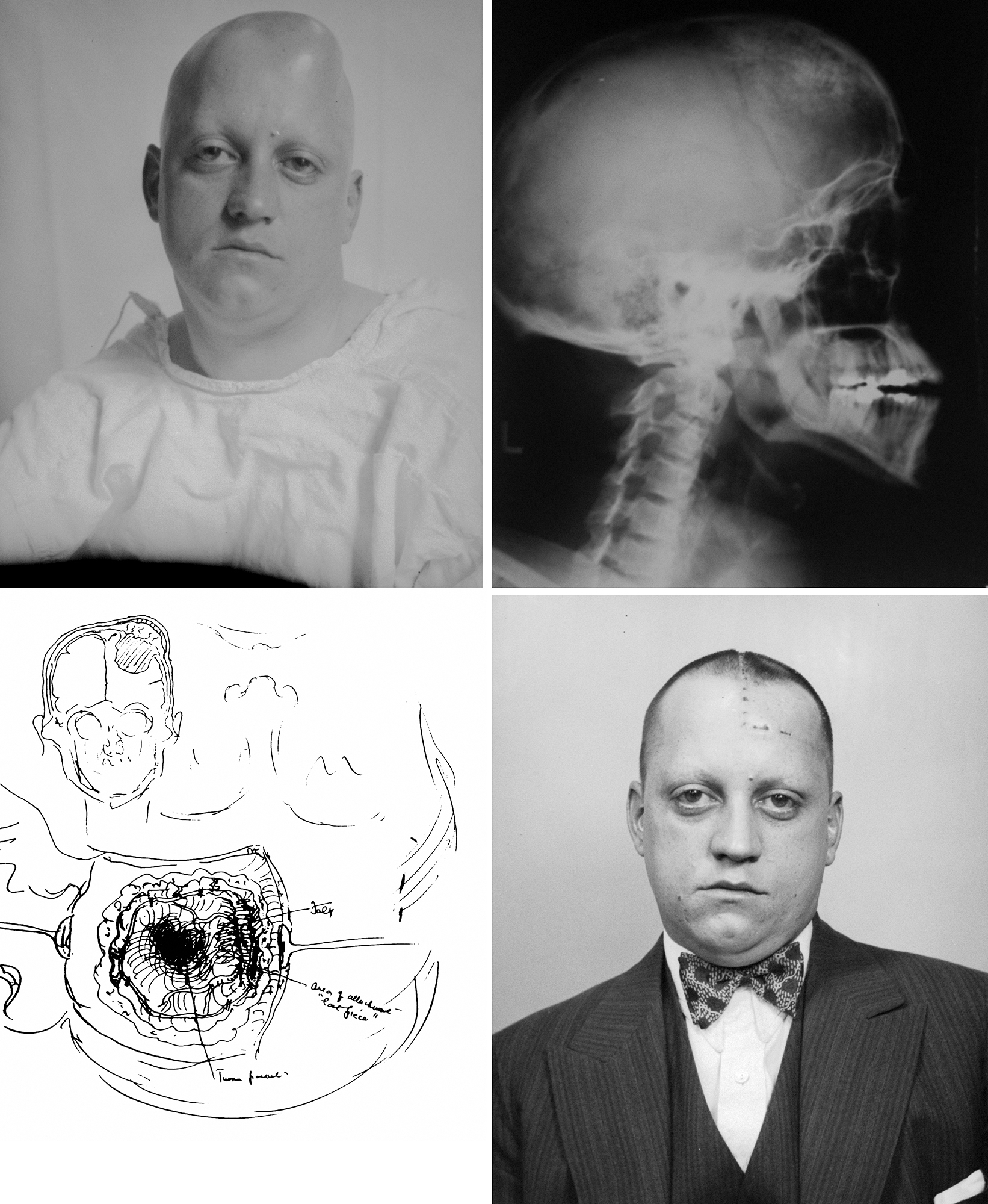 Clinical presentation is largely dependent on tumor location. Tumors situated away from the eloquent cortices may reach a large or giant size before presenting with symptoms of raised intracranial pressure.

Convexity meningiomas are frequently found incidentally on unrelated imaging studies, but may present with focal neurologic findings or epileptic activity of the underlying cortex. Hyperostotic tumors may present with cosmetic deformity of the skull. 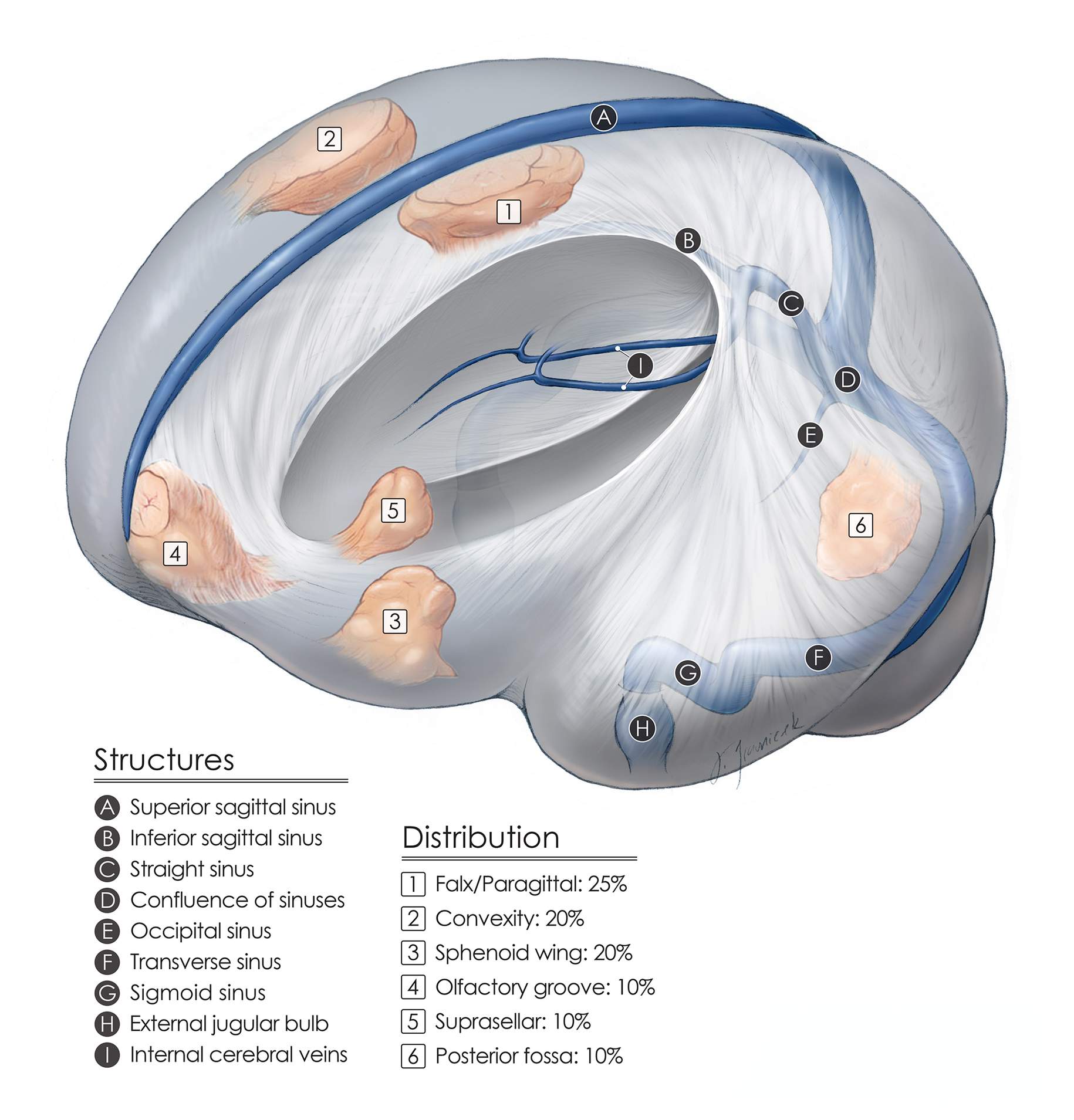 Figure 3: Relative distribution of the most common intracranial meningiomas is illustrated.

Magnetic resonance imaging (MRI) with contrast enhancement is the main diagnostic study of choice for these tumors. Their imaging characteristics are similar to other meningiomas: homogeneous enhancement and an enhancing dural tail. The T2/FLAIR sequences allow evaluation of underlying brain edema and presence of a subarachnoid plane between the tumor and the pia.

Large cortical vasculature (large parasagittal veins or vein of Labbe) and their involvement should be studied preoperatively through the use of complementary studies such as a computed tomography (CT) angiogram or MR venogram. Preservation of these veins is fundamental to securing a desirable outcome after meningioma surgery.

CT scans allow evaluation of bony involvement and may also identify calcification in some tumors. Bone erosion must be considered during preoperative planning. Hyperostosis suggests tumor infiltration and requires resection. 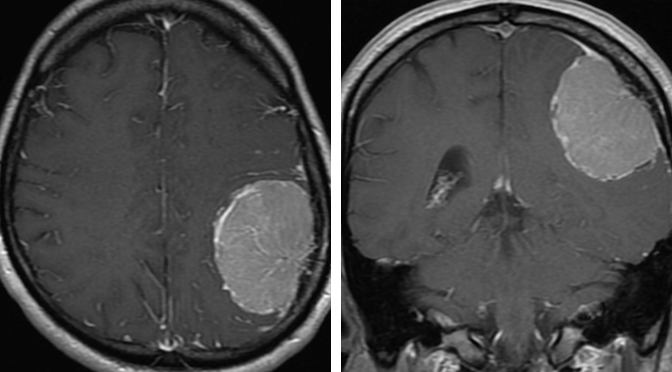 Figure 4: Typical imaging presentation of a convexity meningioma: an intensely homogenously enhancing dural-based tumor with dural tails. Note the vascular star-burst pattern of the tumor at its base.

Radiosurgery may be used for small residual or recurrent tumors, for adjuvant treatment of higher-grade meningiomas, and for palliation in patients unable to tolerate surgical resection.

Small lesions do not require special consideration beyond standard cranial neuroanesthesia and navigation. Dexamethasone, anticonvulsant medications, and mannitol are administered at the start of the surgery, especially if the patient has underlying brain edema.

Large lesions invading the dural sinuses often lead to significant bleeding during surgery and preoperative hematologic studies and precautions for intraoperative venous air embolism detection and management are warranted. Preoperative embolization is unnecessary because the tumor’s meningeal vascular supply is addressed readily after craniotomy through transdural coagulation and circumcision of the tumor’s dural attachments.

Due to this tumor’s accessibility, every effort should be made to achieve a gross total resection, with consideration of excision of dural margins 1-2 cm beyond the points of attachment/dural tail. Hyperostotic bone on the craniotomy flap should be resected. If preoperative studies suggest significant bony involvement, a custom synthetic skull flap or titanium mesh cranioplasty is prepared in advance, depending on the size of the defect.

Please refer to the Cranial Approaches volume for details of the craniotomy. Each tumor requires a unique bony exposure based on its location. Neuronavigation allows a tailored incision that provides adequate exposure for wide dural excision. Although a long linear incision may provide adequate exposure, a curvilinear or horseshoe incision is usually more appropriate for wide-based convexity meningiomas.

At the end of the operation, a large dural defect is often apparent. Therefore, during the early parts of the operation, I routinely harvest a large piece of pericranium to be used for postresection dural closure. I avoid using synthetic dural allografts because they lead to an increased risk of infection and aseptic inflammation. These risks are especially heightened when an allograft is used for large dural defects. 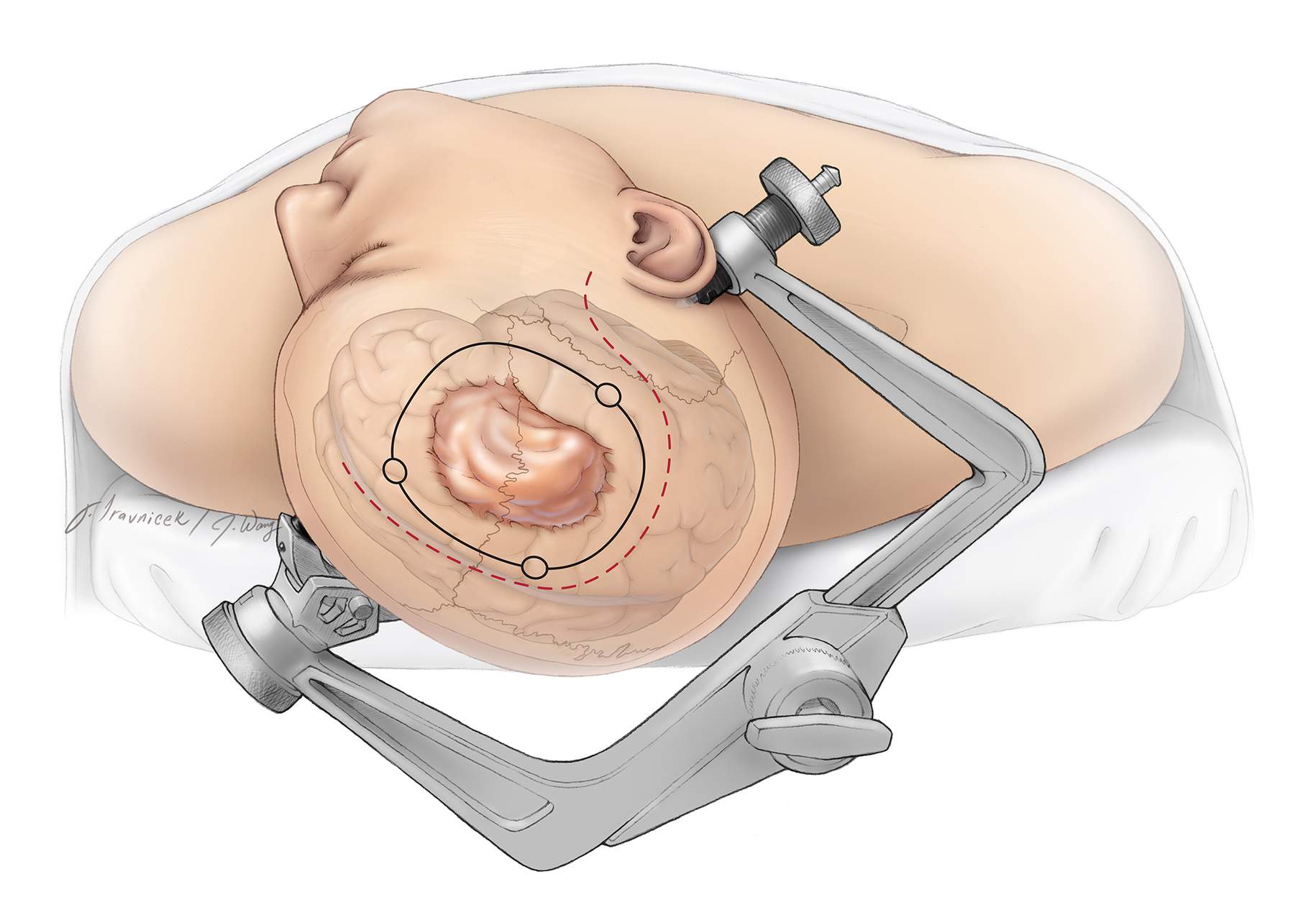 Figure 5: Typical position of the skull clamp and head for resection of a frontal meningioma are depicted. Note the location of the single pin behind the ear. This configuration allows reflection of a large scalp flap without interference from the pins. Restricted craniotomies prevent resection of dural tails and lead to an increased chance of future tumor recurrence. Extension of the patient’s neck will allow gravity to clear bleeding within the operative field. 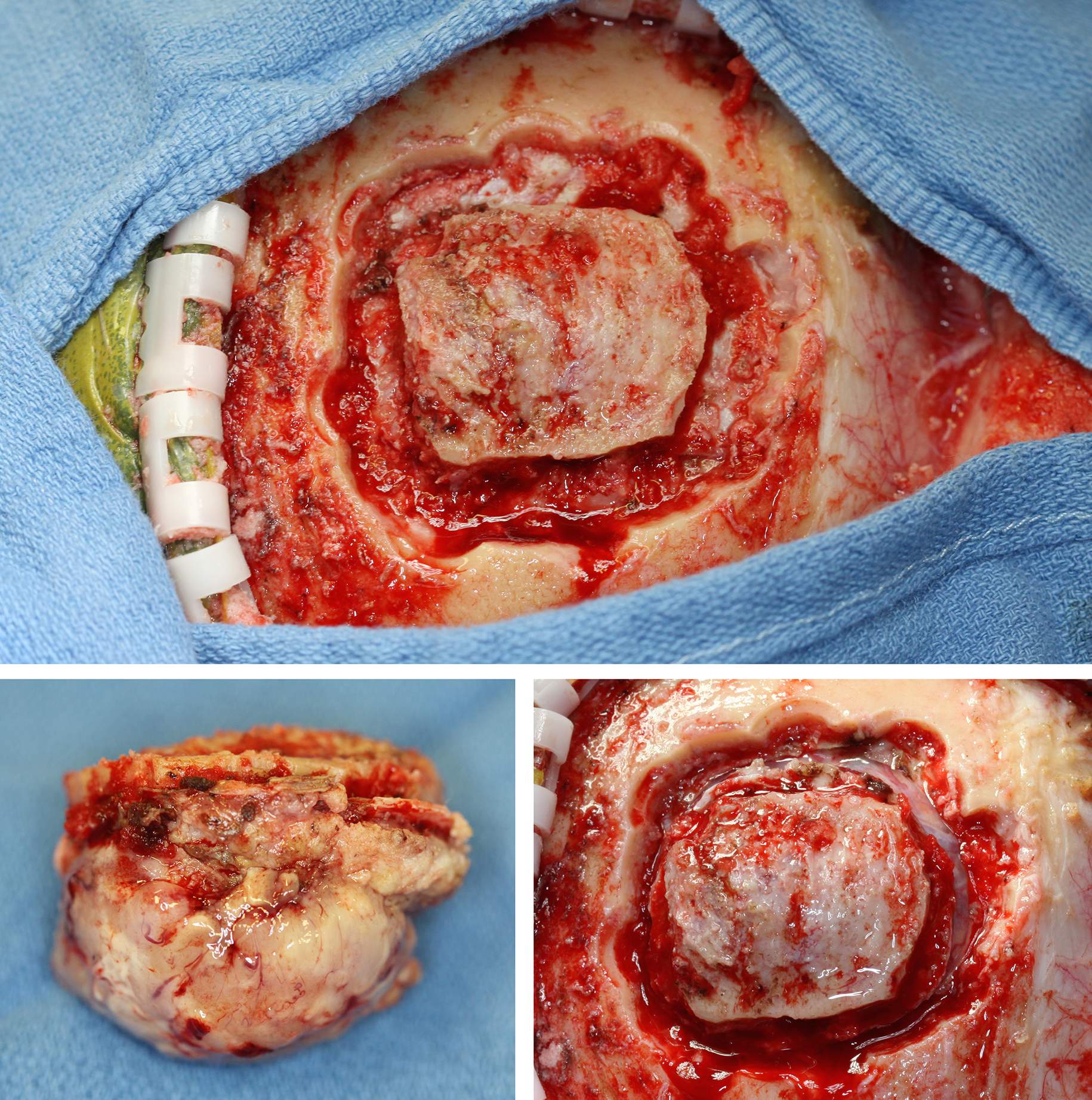 Figure 6: The upper image demonstrates the extent of hyperostosis associated with a left parietal meningioma. This hyperostotic bone can be highly vascular and lead to voluminous blood loss during bone work. I place numerous burr holes immediately next to one another on the periphery of the tumor margins and control the bleeding from the thick cancellous bone through each burr hole using bone wax. These connecting burr holes ultimately complete the craniotomy. The dura may be cut through these holes if feasible (left lower image) and the involved bone, dura, and tumor excised in one piece for smaller tumors (right lower image). In these cases, extensive infiltration of the dura and bone prevents their separation.

In large, highly vascular tumors infiltrating the bone, the bone should be removed piecemeal using an air drill. Stepwise removal of the bone allows for timely hemostasis. Inadvertent forceful elevation of the bone flap in large vascular tumors can lead to life-threatening bleeding and cortical injury. 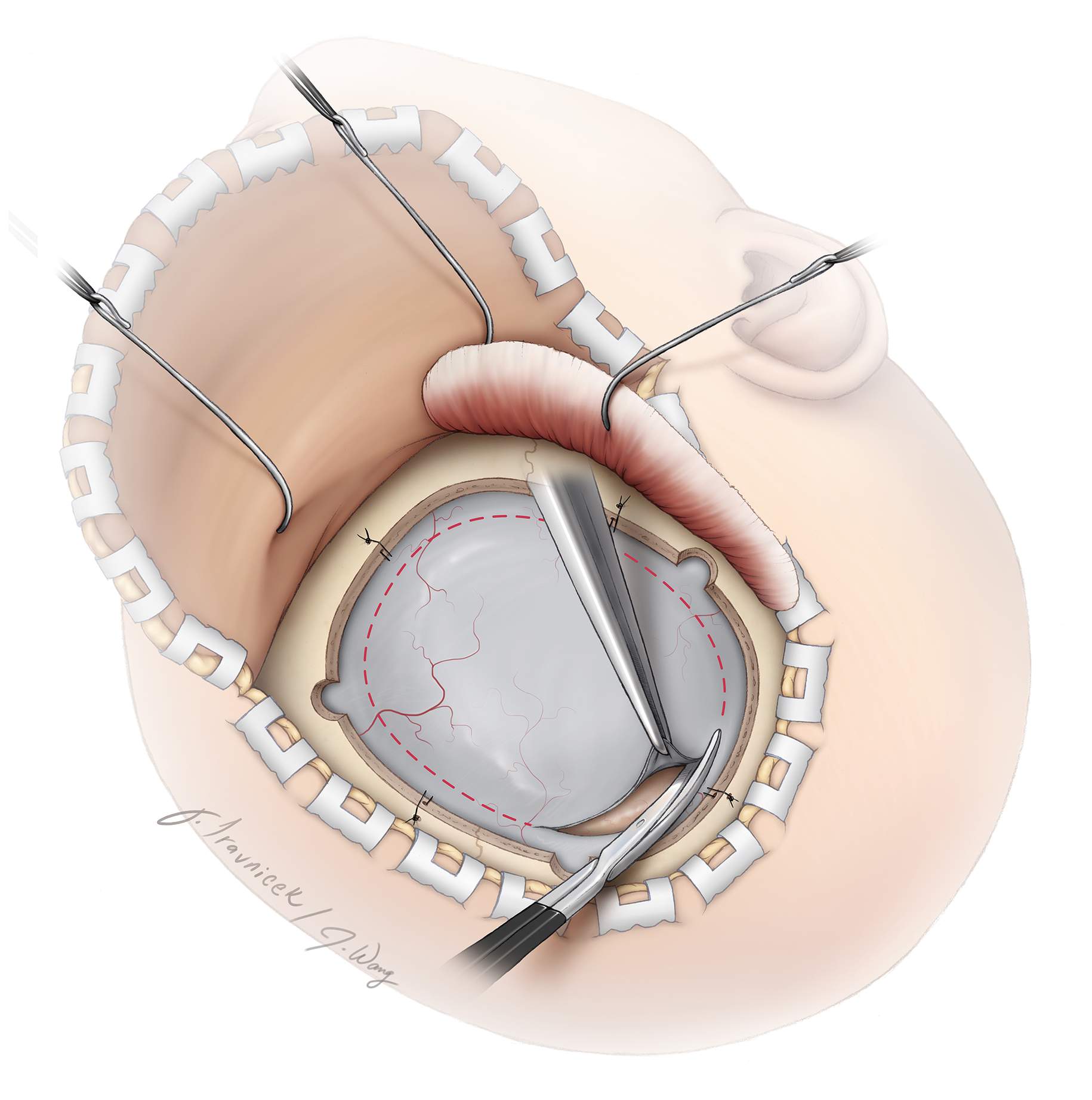 Figure 7: The bone may be adherent to the tumor-infiltrated, highly vascular dura, and elevation of the bone flap may lead to torrential epidural bleeding. A piece of sponge and gentle pressure can slow bleeding while the dural feeders are coagulated in a stepwise fashion.

Next, the dura is incised circumferentially over the normal cortex. Neuronavigation and careful inspection allows identification of the dural margins free of tumor. The dural tails may extend well beyond the margins of the tumor. The overlying dura is coagulated and cut to devascularize the meningioma. If clear dural margins are not visible, the craniotomy should be extended. The transdural veins should be preserved.

Careful epidural hemostasis is necessary before proceeding with intradural surgery. 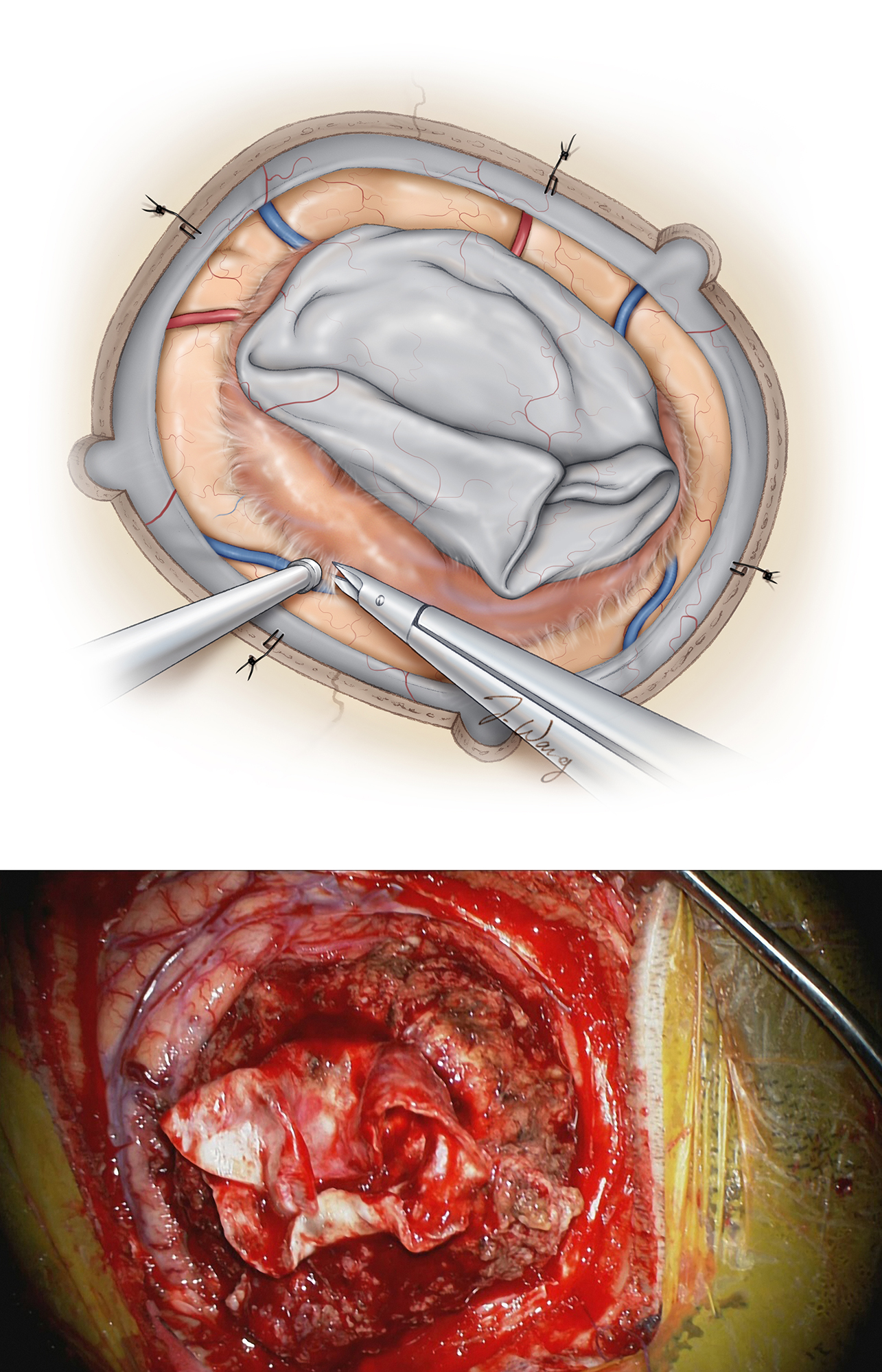 Figure 8: The involved dura is left attached to the tumor to assist with tumor retraction. The subarachnoid planes are identified and opened sharply at the periphery of the tumor (upper image). Care is taken to avoid pial violation, especially around the functional cortices. All vessels within the extracapsular plane should be carefully inspected and en passage vessels protected. This is especially important for more posterior meningiomas because sacrifice of the larger convexity/parasagittal veins may result in disabling venous infarction and postoperative malignant edema. A left parietal meningioma is exposed (lower image-See figure 4 for more details).

Preoperative edema indicates pial violation by the tumor. Intraoperative dissection should carefully preserve the subpial contents and aggressive bipolar coagulation should be avoided. The tumor may be debulked so that the tumor rather than the brain is retracted to advance the dissection planes. If excessive brain tension is present causing excessive cerebral herniation along the craniotomy edges, medical management for increased intracranial pressure should be instituted and the tumor expeditiously debulked and removed to relieve its mass effect. 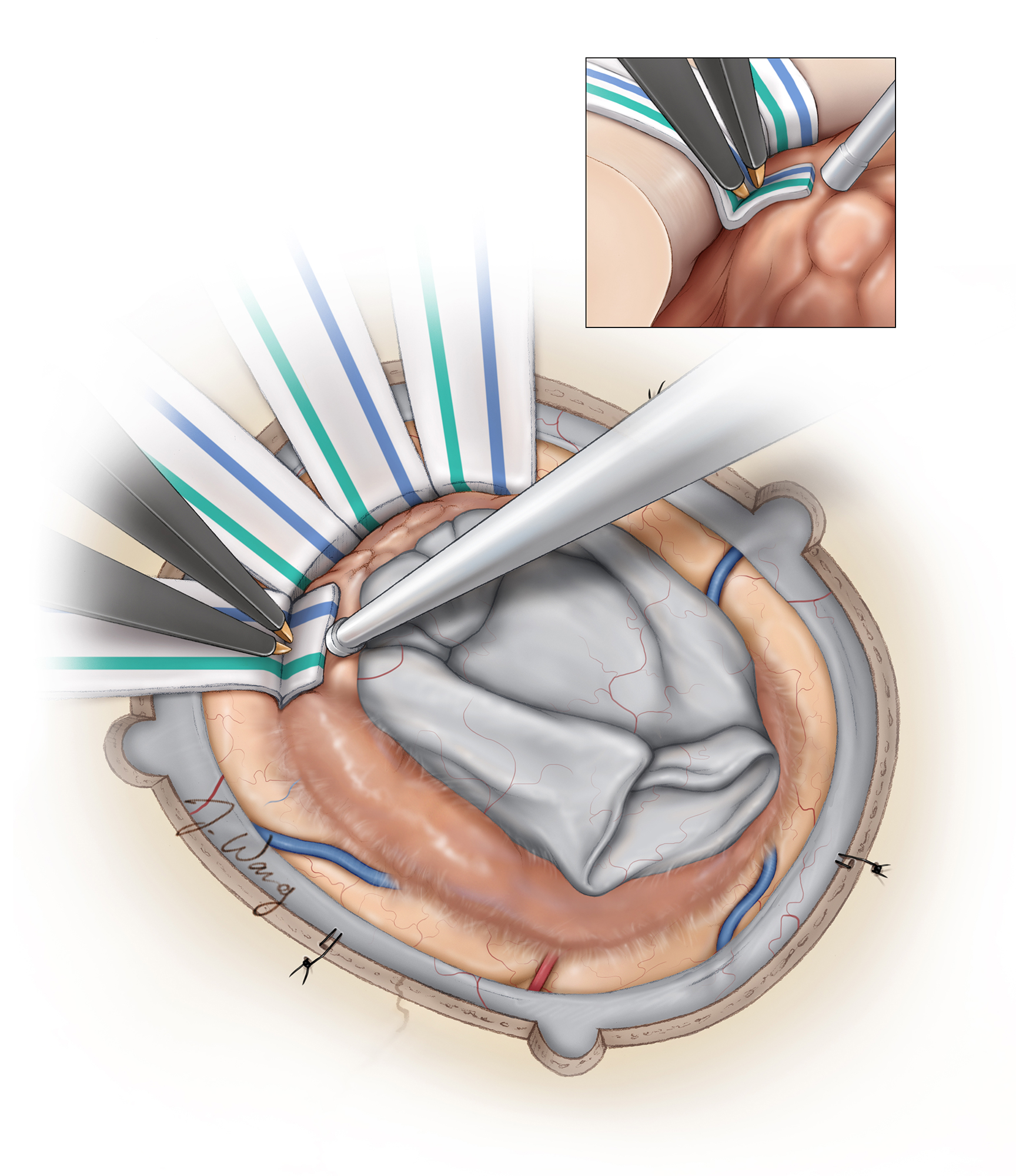 Figure 9: The plane between the cortex and the meningioma is identified using microsurgical techniques. The pial banks and cortical walls are protected with moist cottonoid patties. The tumor capsule is cauterized using bipolar electrocautery to shrink and mobilize it away from the brain. If pial invasion is evident, moist cottonoid patties are used to “roll” the tumor away from the brain (inset image). This maneuver effectively protects the subpial structures from suction injury.

Larger tumors or those with a dominant deep tumor nodule should be internally enucleated to allow the tumor capsule to be collapsed into the resection cavity; this method avoids excessive brain retraction or manipulation. As the tumor is decompressed, the capsule is reflected away from the surrounding brain tissue. This maneuver enables me to predict the extent of tumor removal possible at the lower depth of the same dissection plane. 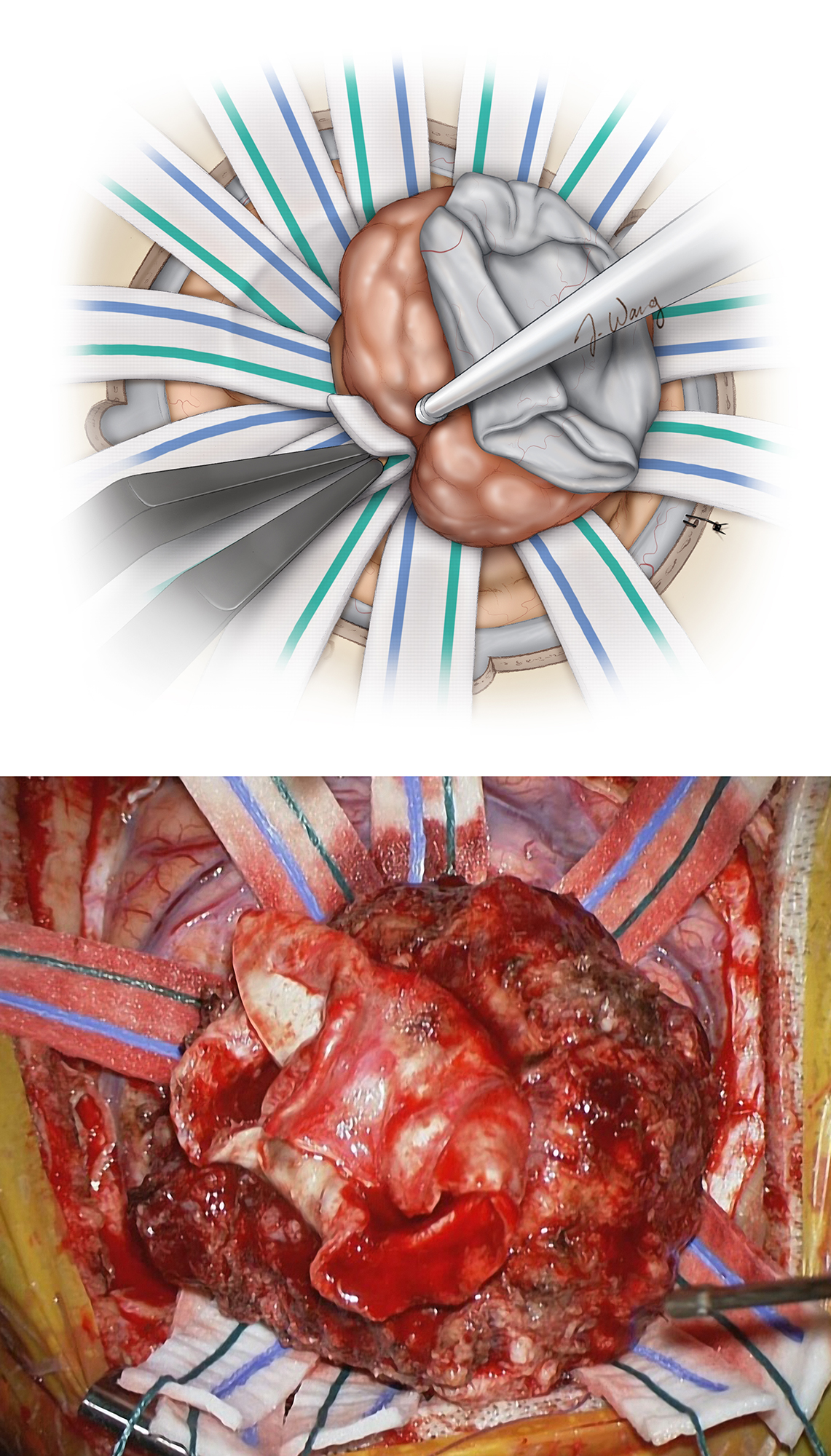 Figure 10: Once a superficial circumferential dissection is complete, the tumor is rolled away from the cortex to allow microdissection at the floor of the tumor bed. Long cottonoid patties are rolled into the depth of the resection cavity to create and preserve the tumor-brain interface (upper image). The tumor is circumferentially dissected free until it delivers itself from the cavity as the underlying brain re-expands (lower image). 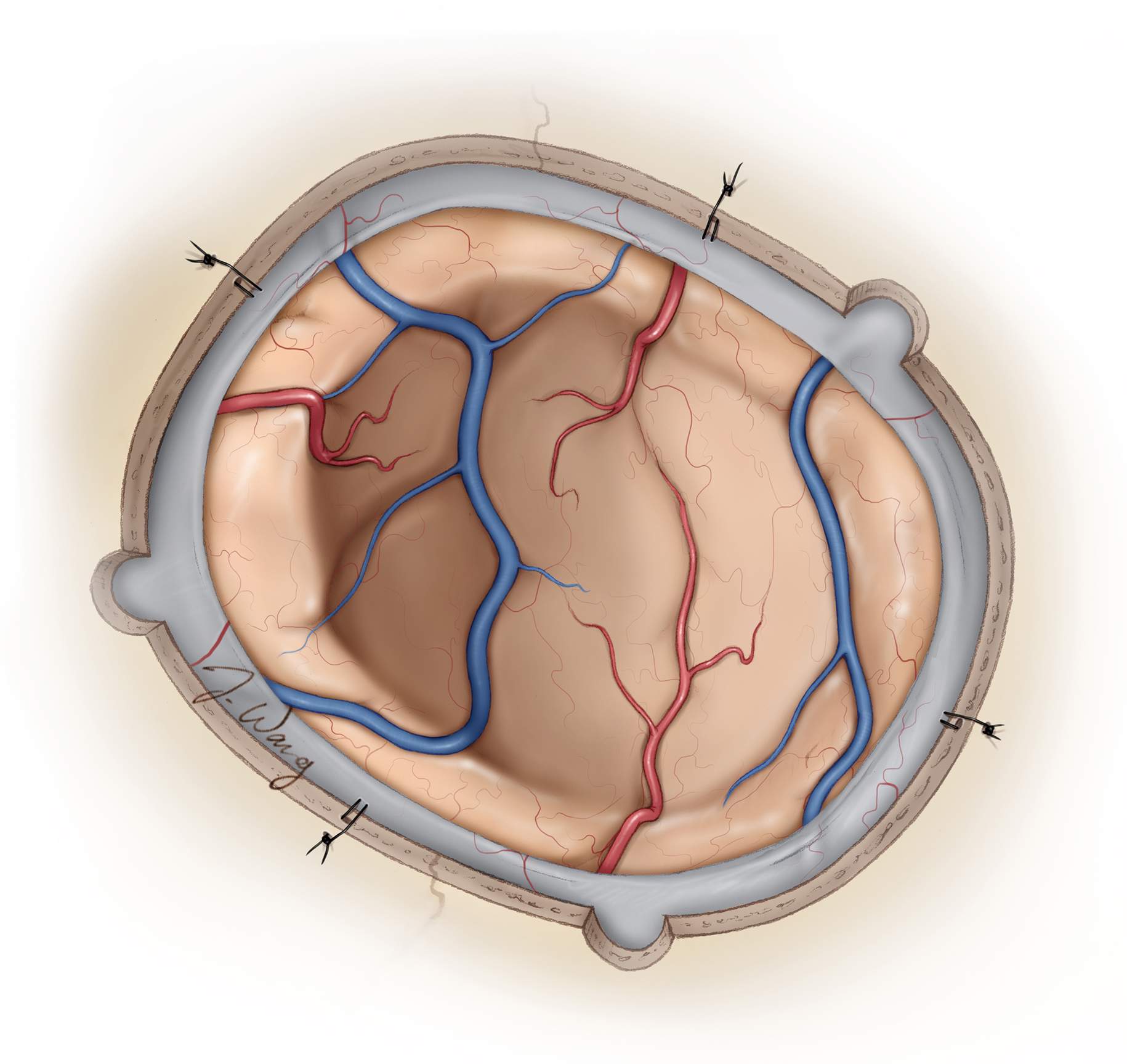 Figure 11: Once the tumor is circumferentially dissected, it may removed en bloc. The tumor bed is inspected. Warm irrigation with judicious use of bipolar electrocautery is used to obtain hemostasis. Slow venous ooze from the brain can be controlled with gentle tamponade and thrombin soaked cottonoid patties. Larger tumors may have lobules; careful inspection ensures that no tumor hides within the folds of the resection bed. The dural edges are further inspected and, if needed, are resected 1-2 cm beyond the dural attachments of the tumor.

Papaverine-soaked Gelfoam pledgets are temporarily placed on arteries that may be in spasm. 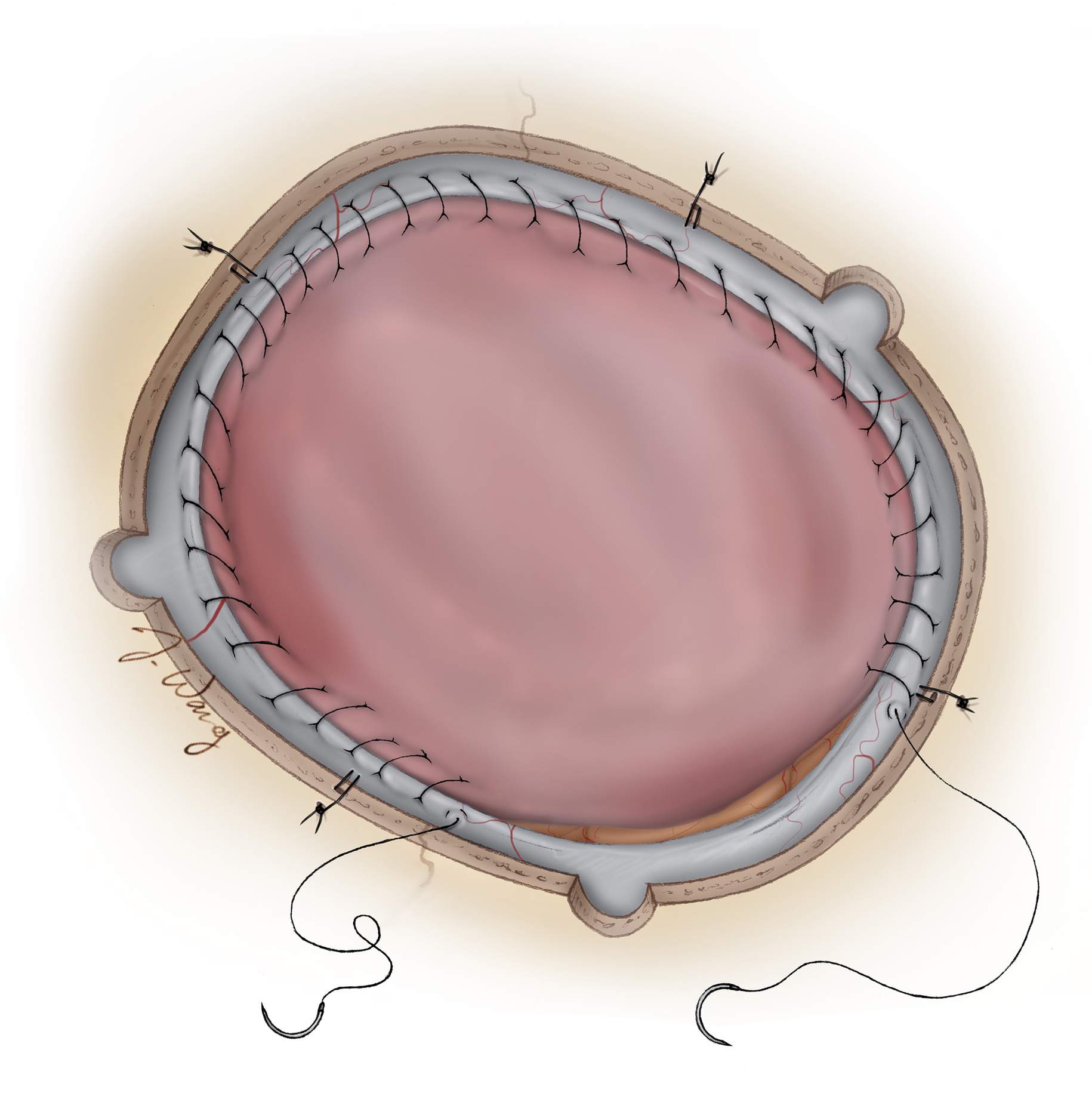 Figure 12: The dural defect is repaired using the previously prepared pericranial autograft. Epidural tack-up sutures should be used to constrain the epidural space and decrease postoperative epidural collections. The bone flap is inspected for any hyperostosis that should be excised. Finally, the bone flap is replaced and any large bony defect is covered with a prefabricated custom flap or titanium mesh.

Mobilization and en bloc resection of large convexity meningiomas during their dissection can place the surrounding cortices under untoward forces, leading to neurovascular injury. A bulb syringe connected to a standard surgical suction device may be used to handle the bulk of the tumor mass using the vacuum-assisted en bloc resection technique. 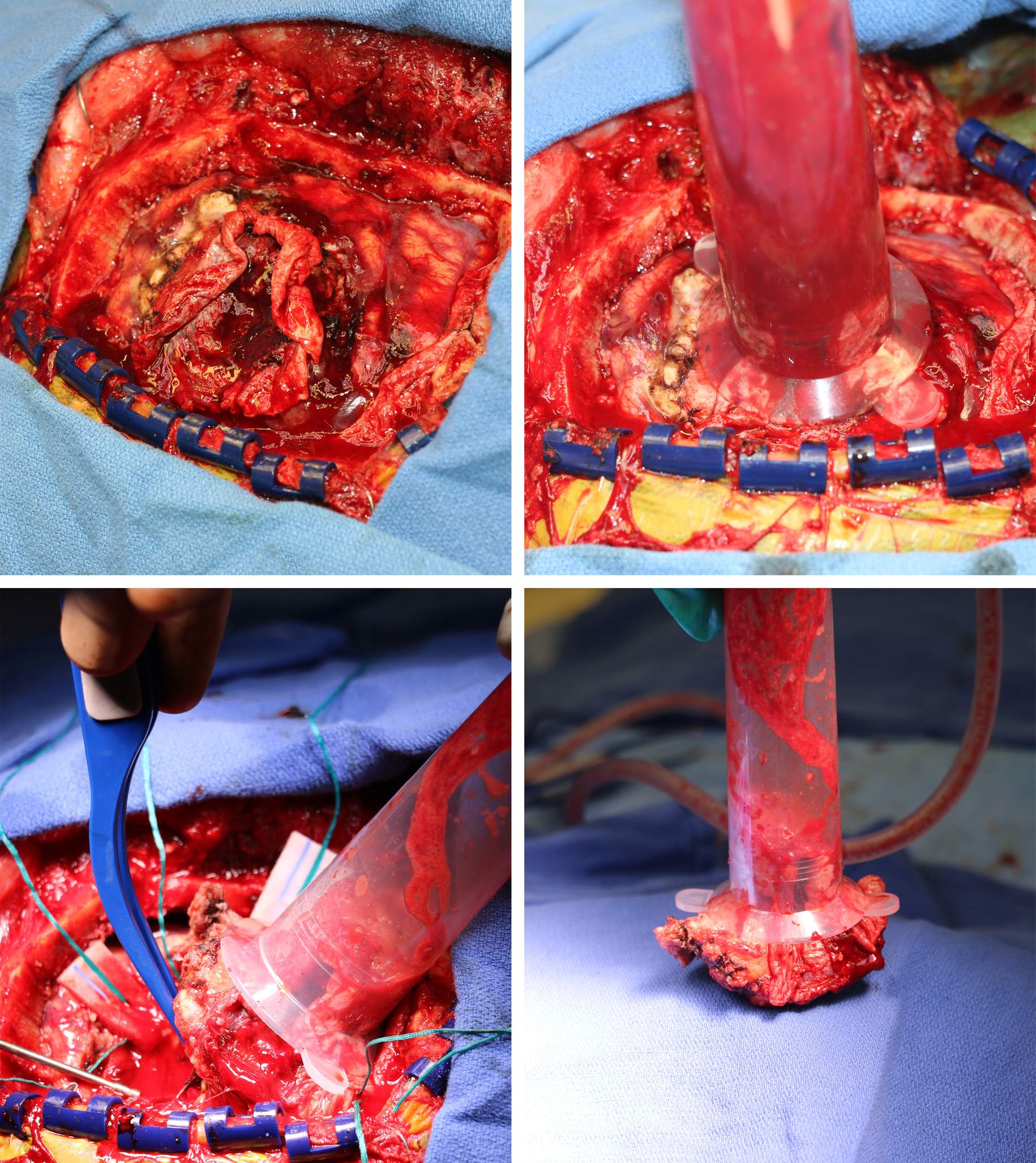 Figure 13: The technique of vacuum retraction for this large convexity meningioma (left upper) is demonstrated. The bulk of the tumor mass can be reduced into the bulb syringe chamber, allowing more space for microsurgery around the tumor capsule and its resection (remaining images). Firm tumors that are not mobilizable into the chamber may not be suitable for this technique. 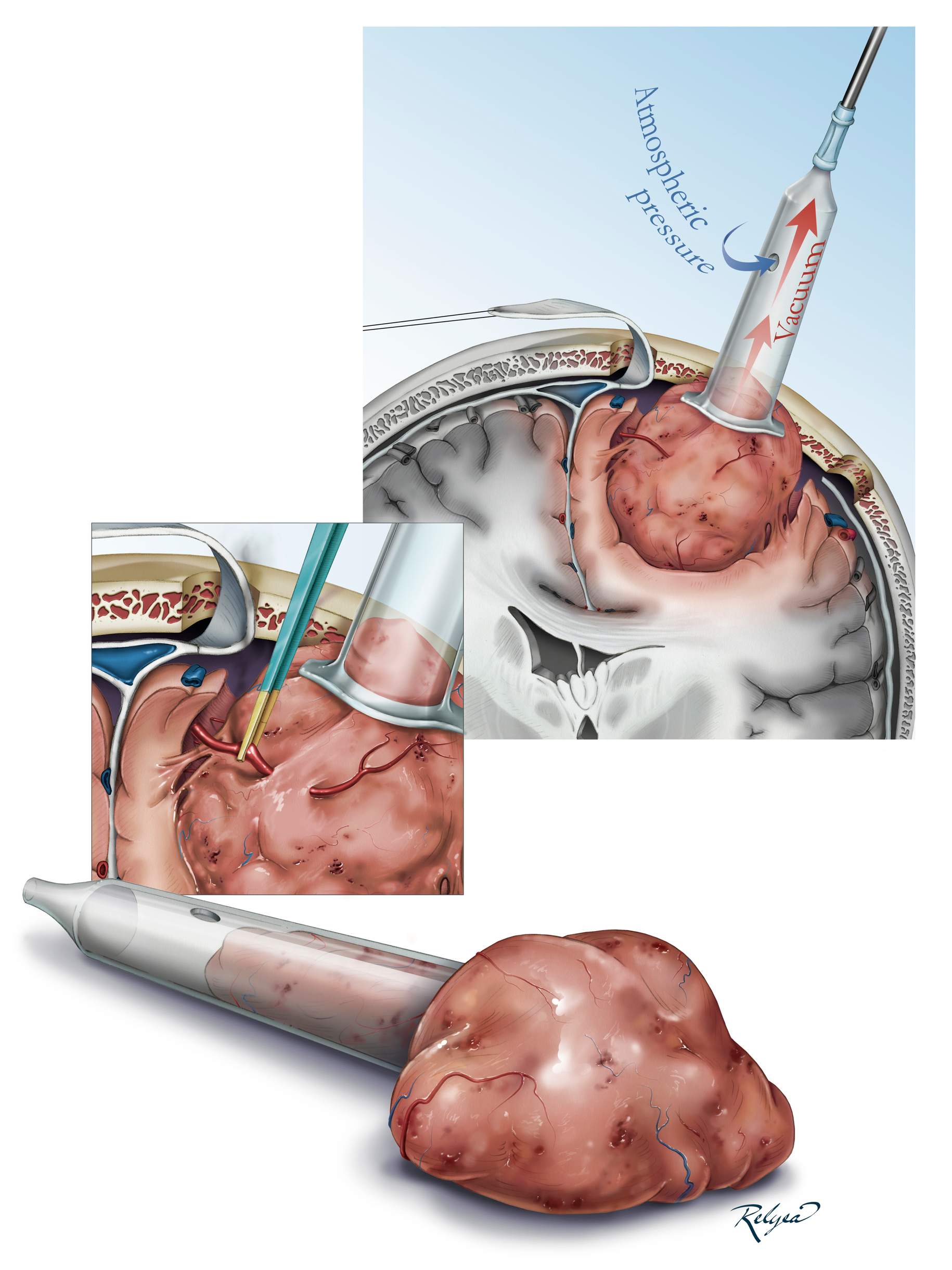 Figure 14: The technical principles of en bloc vacuum-assisted resection are described. The vacuum force is not used to "avulse" the tumor from the cortex but allow gentle mobilization of the tumor so that microsurgery around the tumor capsule can continue.

The patient is observed in the intensive care unit overnight for frequent neurologic evaluations and pain and blood pressure control. A postoperative CT scan is obtained. Steroids are weaned slowly postoperatively.

Tumors with a large amount of underlying cerebral edema may lead to malignant postoperative cerebral swelling; patients with such tumors should be maintained on steroids for a longer postoperative period. Prophylactic anticonvulsants are administered perioperatively, but stopped one week after surgery if the patient has not suffered from a seizure.

Patients with meningiomas have an increased risk of postoperative deep vein thrombosis. These patients should be treated with aggressive preventive measures including early mobilization.