The topics related to general considerations, clinical presentation, evaluation, and indications for surgery are discussed in the chapter titled Petroclival Meningioma: Posterior Petrosectomy.

In addition, the general resection techniques for removal of petroclival meningiomas are discussed in the Petroclival Meningioma: Posterior Petrosectomy chapter.

With the anterior petrosal approach, the surgeon attempts to expose the upper third of the clivus as the surgical target. This region extends from the tuberculum sella toward the internal auditory canal (IAC). Any portion of the tumor that extends beyond the IAC is not reachable via this approach. For more details about application of this skull base operative corridor, refer to the Anterior Petrosectomy chapter.

The anatomy of the petroclival region is complex. Detailed study of this region in the microsurgical laboratory is mandatory. 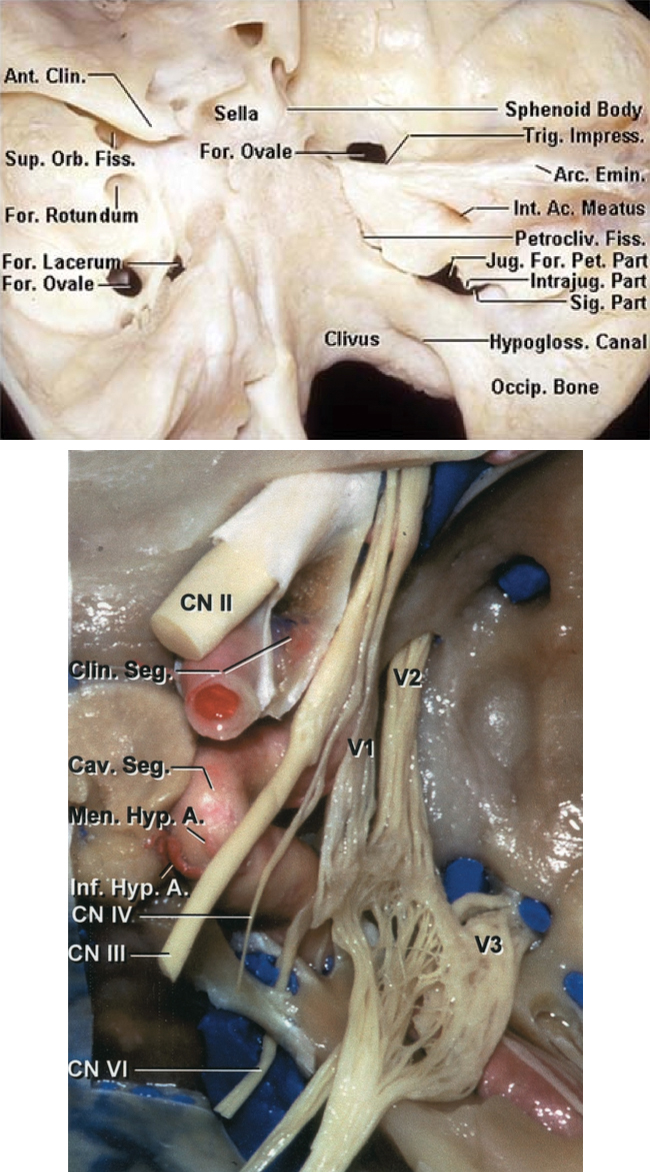 Figure 1: A posterior oblique view of the clivus is shown. Note the location of the petroclival fissure from which most petroclival meningiomas arise (top photo). The relevant neurovascular anatomy on the right side is also included (bottom photo). The cranial nerve (CN) VI travels under the dura along the clivus before entering the cavernous sinus. Coagulation in this part of the clival dura can lead to the nerve’s permanent injury. (Photos courtesy of AL Rhoton, Jr.) 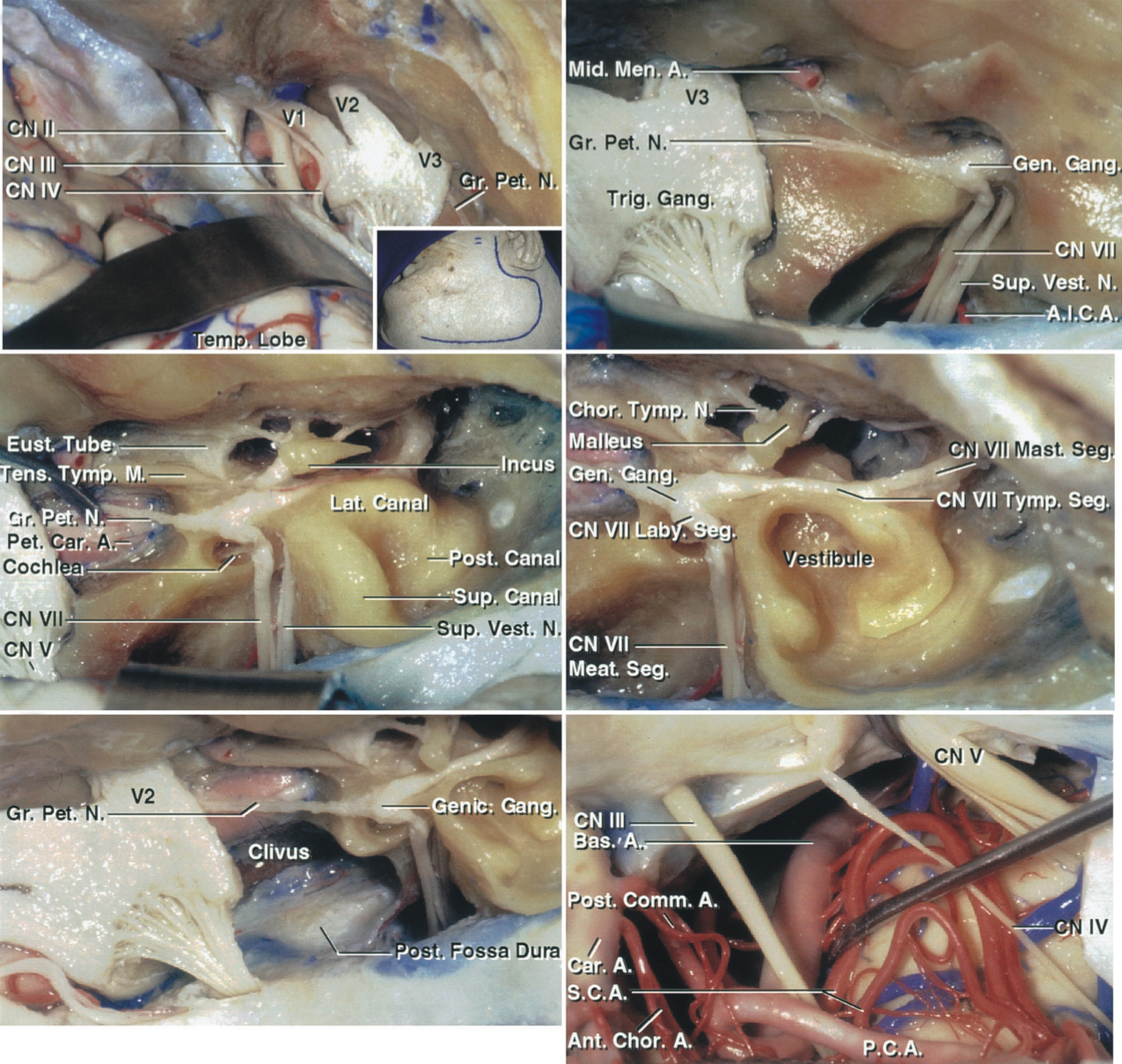 Figure 2: A subtemporal/middle fossa exposure is shown. The dura has been elevated from the middle fossa floor and lateral wall of the cavernous sinus (top row of images). Although not routinely performed during surgery, the bony roof over the geniculate ganglion and internal auditory meatus have been resected and the dura lining the meatus opened to show the underlying anatomy. Additional middle fossa floor has been removed to identify the petrous carotid, the cochlea (within the angle between the greater petrosal nerve and pregeniculate part of the facial nerve), and the semicircular canals and tympanic cavity (middle row of images). The petrous apex, medial to the cochlea and next to the trigeminal nerve, has been drilled to expose the lateral edge of the clivus and the posterior fossa dura. After incising the medial tentorial edge, the oculomotor, trochlear, and trigeminal nerves and other nearby neurovascular structures are uncovered (bottom row)(Images courtesy of AL Rhoton, Jr).

Before patient positioning, I routinely place a lumbar drain to facilitate extradural drilling and exposure via dural sac decompression. This is an important step for petrous apex drilling. Please see the Anterior Petrosectomy chapter for more details regarding exposure.

One of the most important primary concerns during this approach is preservation of CN VI. This tiny, long, and therefore vulnerable nerve is usually displaced by the tumor either inferiorly and medially or superiorly and laterally, and it lies between the surgeon and the deeper sections of the mass. The basilar artery is displaced contralaterally and CN III is usually found supramedial to the pole of the tumor. 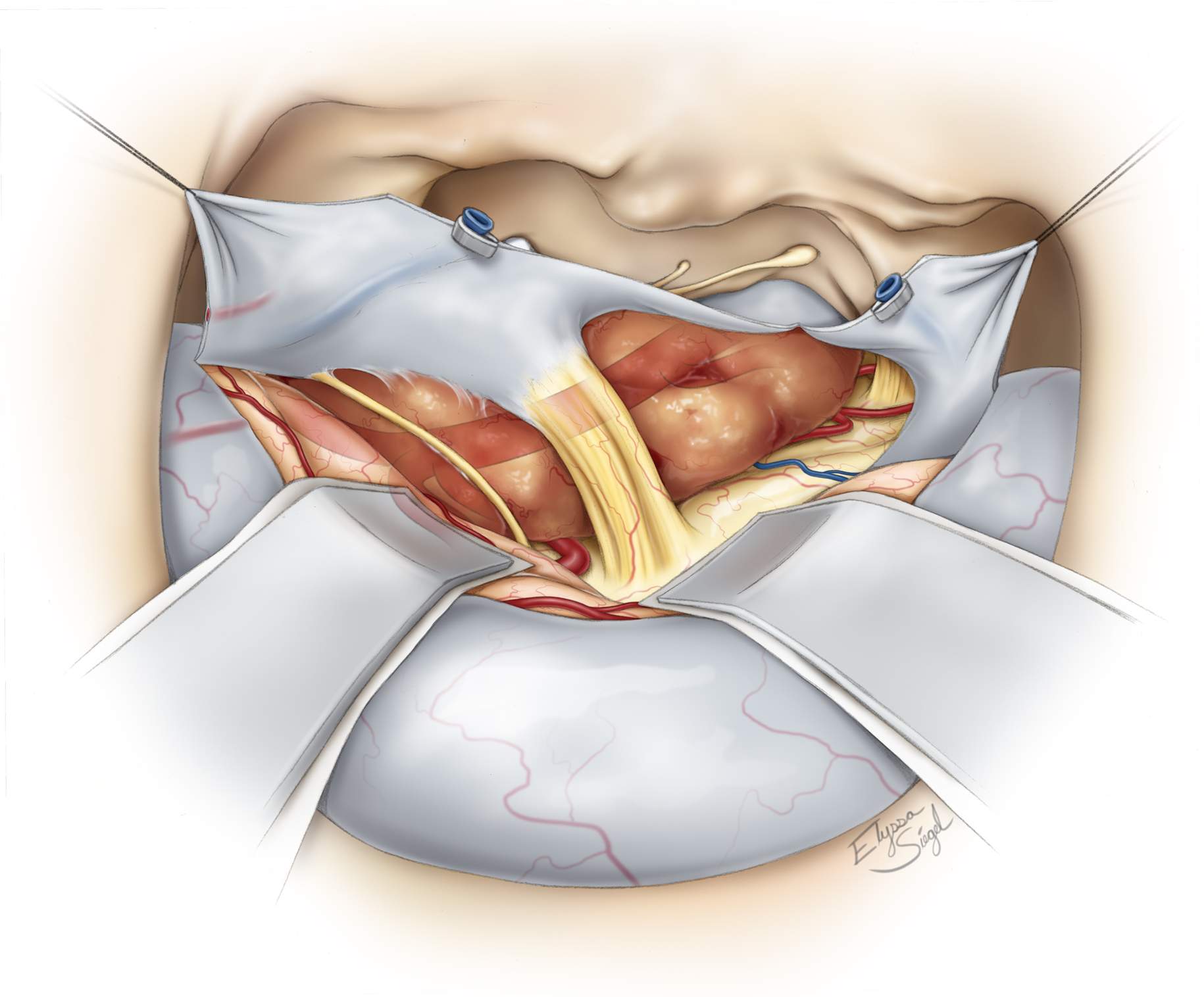 Figure 3: The trigeminal nerve roots traverse the tentorium at the porus trigeminus to enter the Meckel cave and may be inadvertently transected during a tentorial incision. The location of the tumor in relation to the surrounding structures after the dural opening is shown. Cranial nerve V is centered over the operative field and the basilar artery (depicted as ghosted on this illustration) is in the surgeon’s operative blind spot. I work around CN V to remove the tumor piecemeal. 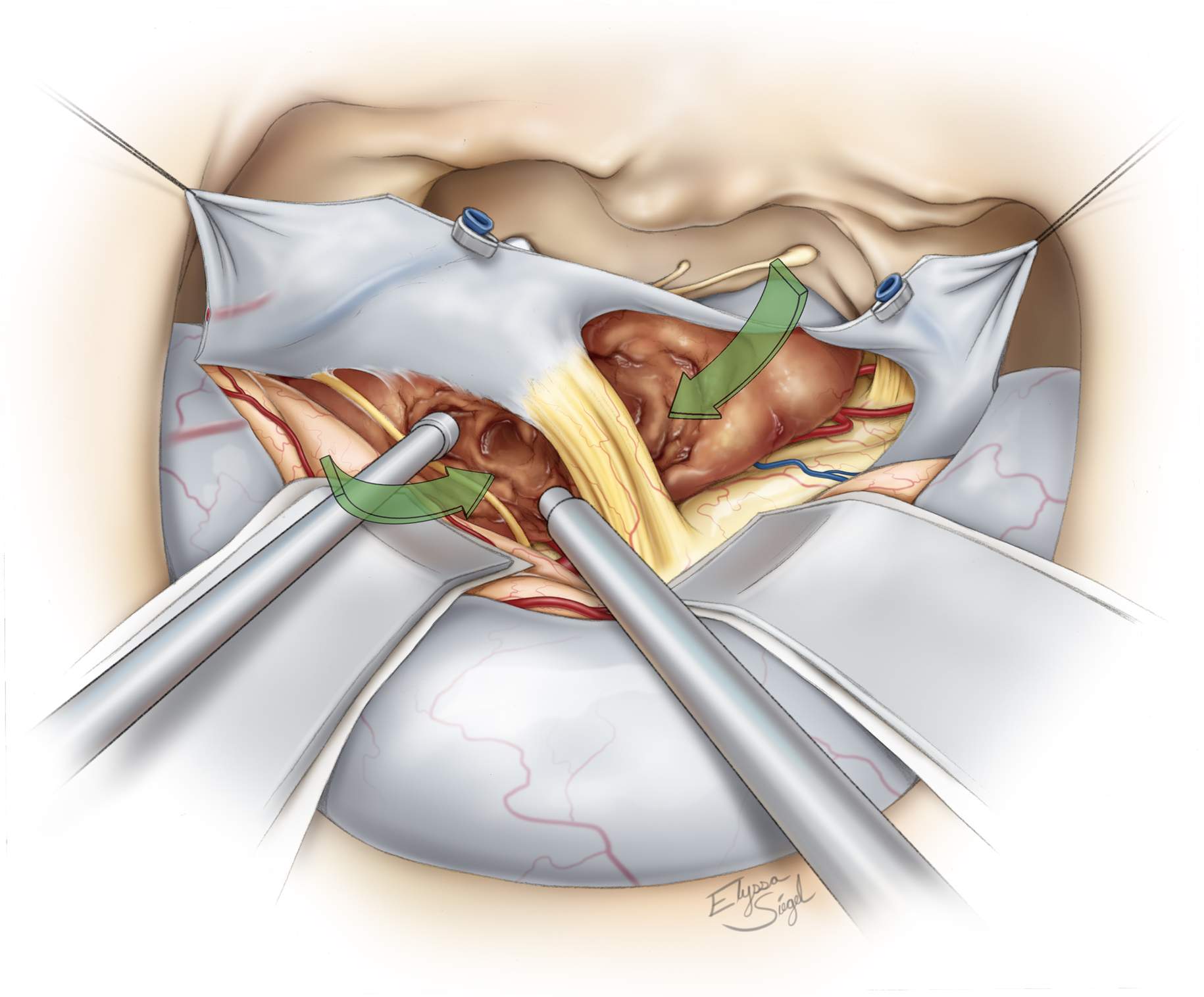 Figure 4: Since the operative corridors are relatively narrow around CN V, one must remain cautious about handling CN IV. The ultrasonic aspirator is especially effective for tumor removal within these difficult-to-navigate trajectories around the cranial nerves. The aspirator should not injure the perforating vessels hiding around the tumor capsule. Note the arrows that define the principle working corridors. Traction on CN V is avoided to prevent postoperative trigeminal neuropathy. 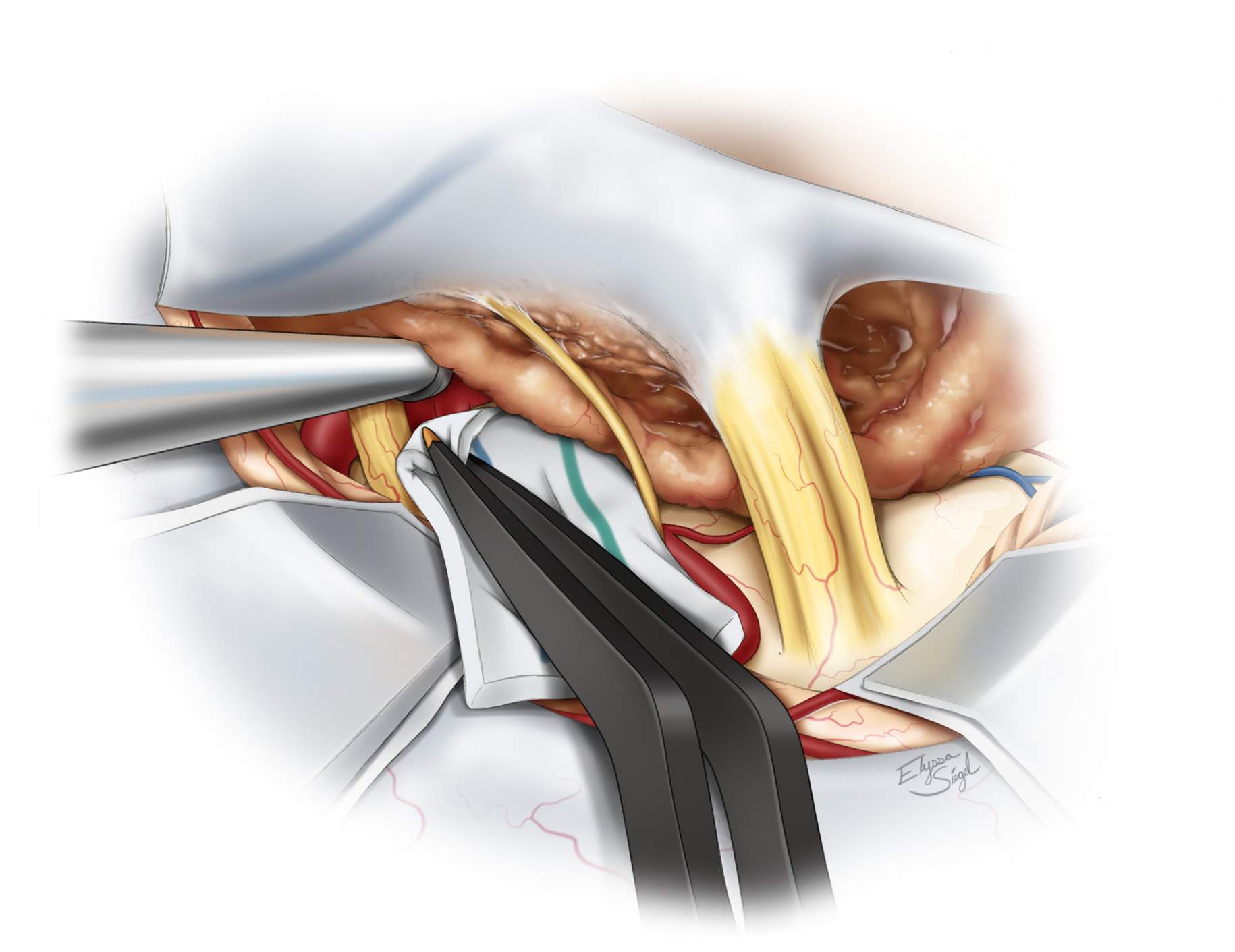 Figure 5: I prefer to use cotton patties to maintain the dissection planes between the tumor and the basilar artery and its branches. The third nerve is apparent at the depth of the operative cavity near the tip of the suction device. The cotton patty protects the basilar artery against the ultrasonic aspirator. The tumor is mobilized in the medial-to-lateral direction. 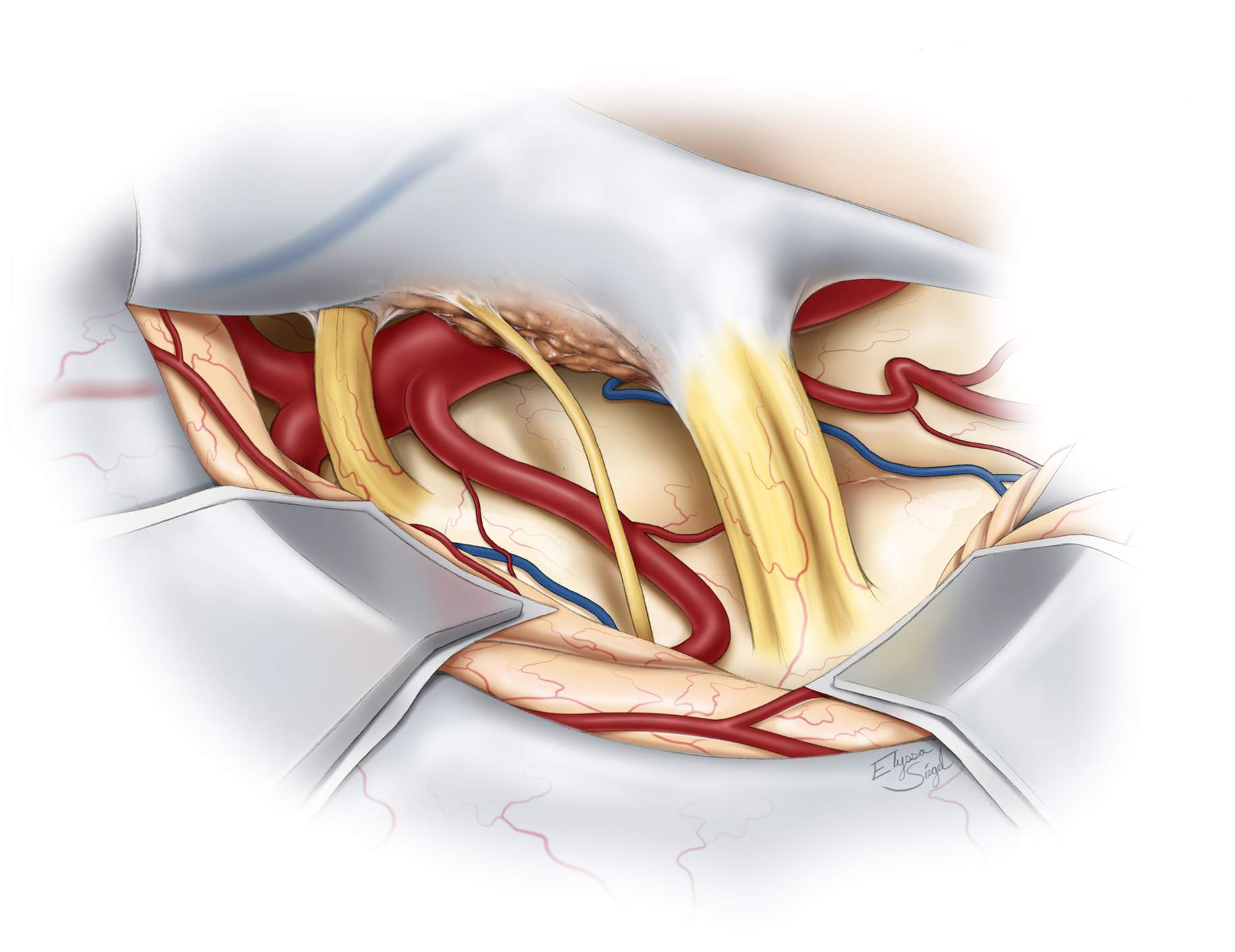 Figure 6: The small part of the tumor that is infiltrating the cavernous sinus is left behind. A final view of the operative field is shown. The goal of the surgery is radical subtotal tumor removal with preservation of function.

A 42-year-old woman presented with progressive double vision and growth of a small upper petroclival tumor. 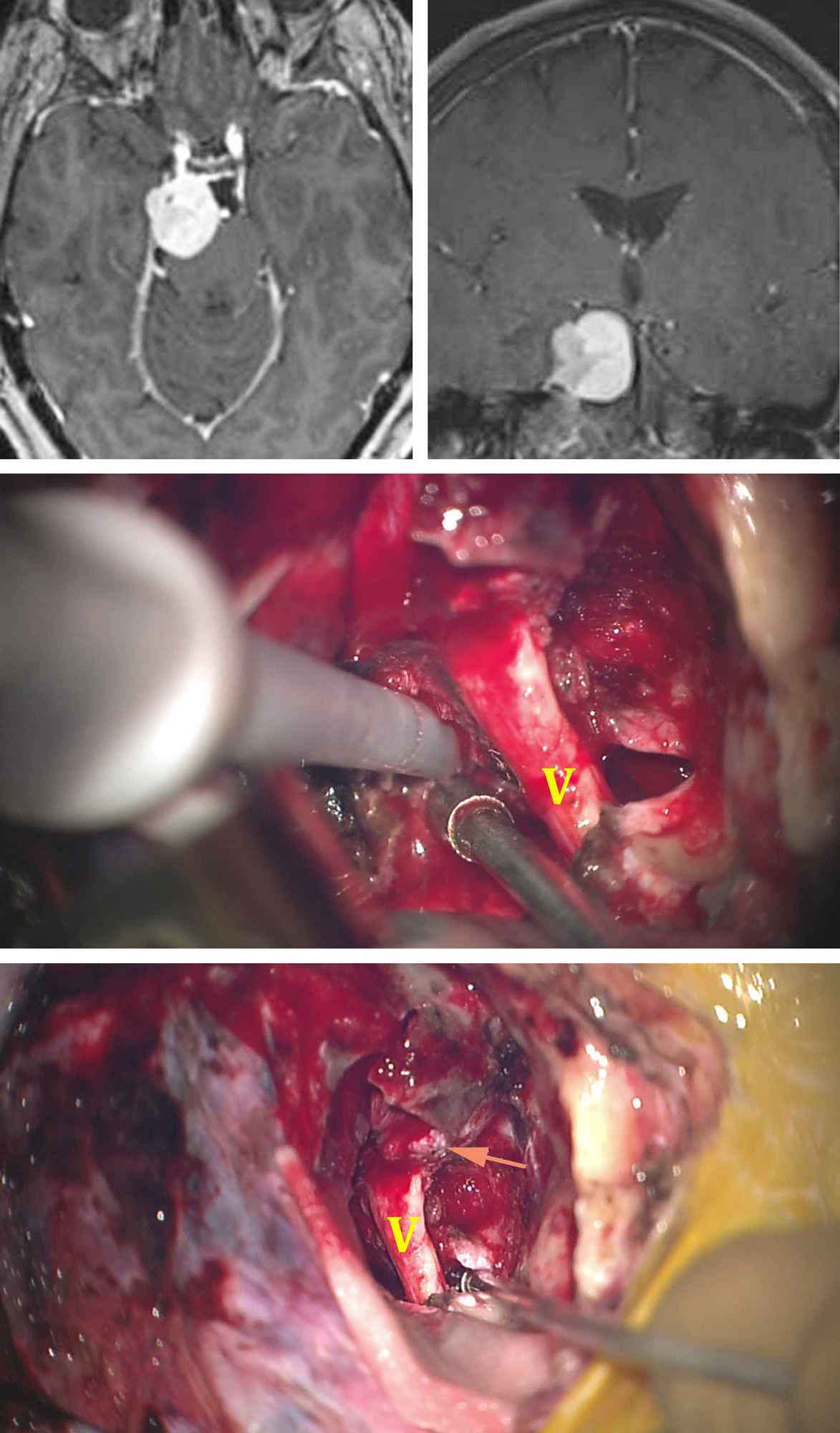 Figure 7: This right-sided upper petroclival meningioma was removed via an anterior petrosectomy (top photos). Note the slight extension of the tumor into the cavernous sinus. The middle intraoperative image illustrates the use of an ultrasonic aspirator for removing the tumor around CN V. The bottom image shows a final view of the operative field after tumor removal. The residual tumor infiltrating the cavernous sinus is labeled with an arrow.

Once the surgical goals have been achieved, the surgeon’s attention turns to closure. Primary dural closure is impossible, so alternative methods are applied. The available dural flaps are approximated.

Adipose tissue with its globular texture is one of the best barriers against cerebrospinal fluid leakage. Strips of adipose tissue are placed across the dural opening to seal the dural defect. Before placement of the adipose grafts, all exposed air cells are meticulously waxed.

Alternatively, a vascularized tissue/temporalis flap prepared during the exposure may be rotated to fill the defect in the dura. This method is used for cases involving repeat operations or for patients who have a prior history of radiation treatment. The periosteal flap is draped over the drilled petrous surface. The bone flap is replaced and secured using miniplates, and the rest of closure is conducted in standard fashion. For more details, refer to the Anterior Petrosectomy chapter.

The lumbar drain is used to drain 8 cc per hour of cerebrospinal fluid for 48 hours after surgery. Patients are mobilized as soon as possible.

For additional illustrations of the middle fossa-transpetrous apex approach to the anterosuperior cerebellopontine angle, please refer to the Jackler Atlas by clicking on the image below: 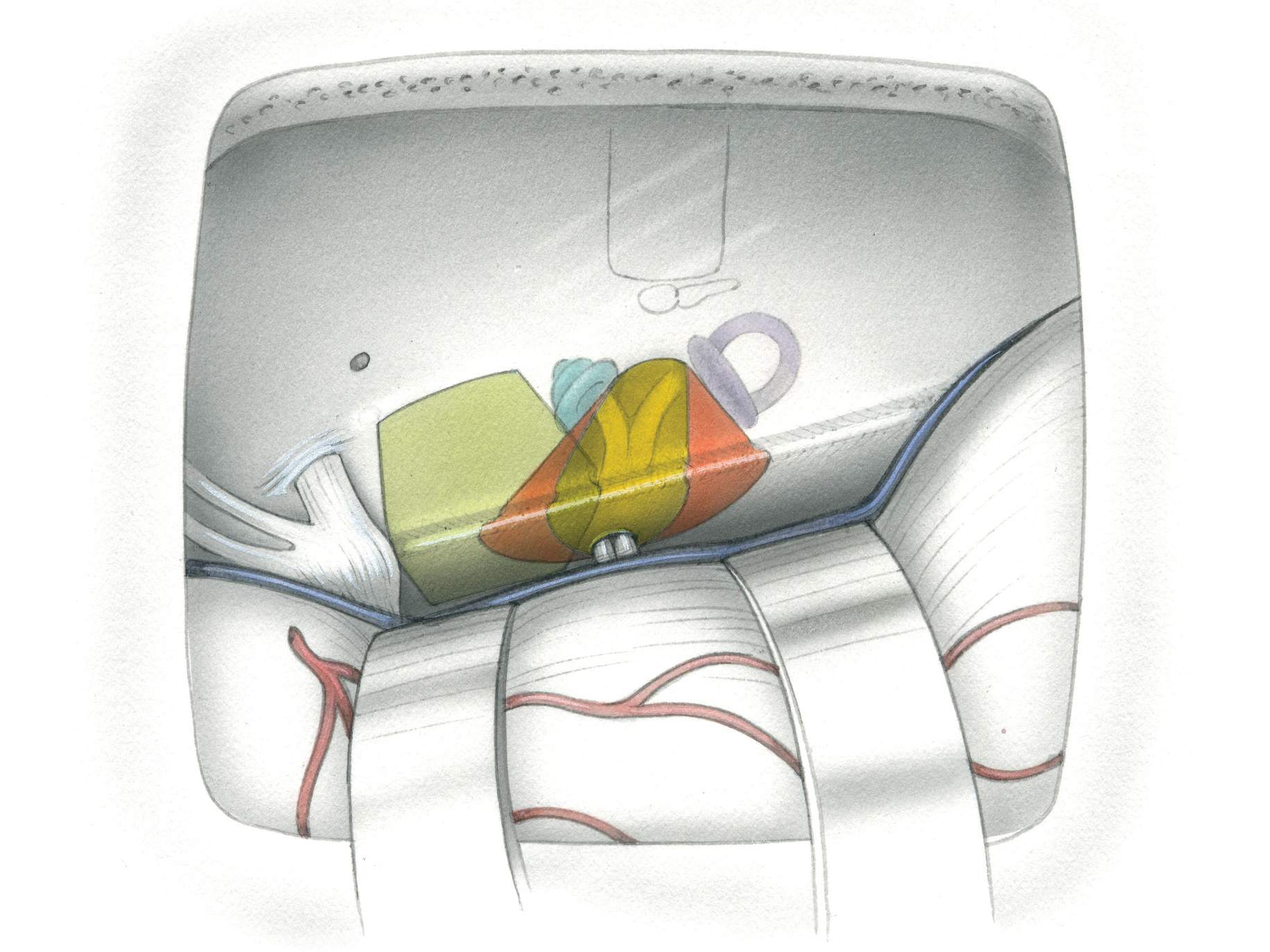