Minimizing the Risk of AVM Recurrence

Failure to completely obliterate or resect an arteriovenous malformation (AVM) is not an exceedingly rare outcome following intervention, particularly with high-grade lesions that have significant nidal diffusivity. The altered but persistent aberrant flow dynamics within a partially obliterated AVM may cause an increased risk of hemorrhage compared with the lesion’s natural history/progression.

Aberration or changes in the angiographic appearance of the perinidal cerebrovascular anatomy require that the surgeon perform a formal digital subtraction angiography (DSA). DSA is the diagnostic “gold standard” and the best method to identify residual and recurrent AVMs.

Studies about angiographic recurrence have reported an overall rate of 14.3% recurrence of AVMs over a period of 4 to 5 years following surgical intervention. In a study designed to identify the correlative factors for AVM recurrence, the strongest factors were younger patient age and deep venous drainage.

In this chapter I will further discuss the management strategies for residual and recurrent AVMs following intervention.

The presence of a residual AVM is generally identified on DSA either during or immediately after surgery. Some experts theorize that vasospasm after surgical intervention may cause a residual nidus to remain angiographically occult.

Recurrent AVMs are generally identified during surveillance imaging or after the appearance of symptoms that may include seizures, hemorrhage (subarachnoid, intraventricular, or intraparenchymal), focal neurologic symptoms from mass effect, or steal phenomena. Pediatric patients may present with symptoms of hydrocephalus or heart failure caused by arteriovenous shunting.

Complete excision of an AVM logically implies cure, and therefore predicts no potential recurrence. However, children and teenagers are especially prone to recurrent AVMs, even after complete resection verified by angiography. Please see the Pediatric AVM chapter for more details. Recurrence in adults is less common.

Some colleagues believe that possible reasons for recurrence of pediatric AVMs include 1) a propensity for a young person’s developing cerebrovascular system to create another AVM, and 2) the presence of intranidal vascular steal, which can cause a residual AVM to remain angiographically occult.

For complex, high-grade, AVMs, management is often multimodal and staged, so partial treatment of the AVM is common.

The natural course of residual or recurrent AVMs is not well described because of sparse literature on this topic. The literature is not clear about the impact of partial embolization on flow dynamics and the concordant risk for rehemorrhage or primary hemorrhage.

Surveillance evaluation following AVM intervention can include modern magnetic resonance (MR) or computed tomography (CT) angiography. These modalities provide a high-resolution evaluation of the AVM’s angioarchitecture for residual or recurrence AVM after intervention. Any indiscriminate findings on either MR angiography or CT angiography should be more thoroughly evaluated via DSA.

Characterization of the unique angioarchitectural features of an AVM is best evaluated with DSA. Features that are critical to identify include venous ectasia, strictures, and intranidal aneurysms.

Although there are reports in the literature of recurrence following complete resection as confirmed by angiography after a procedure, the overall recurrence rate in adults is so low that I consider long-term surveillance unnecessary. 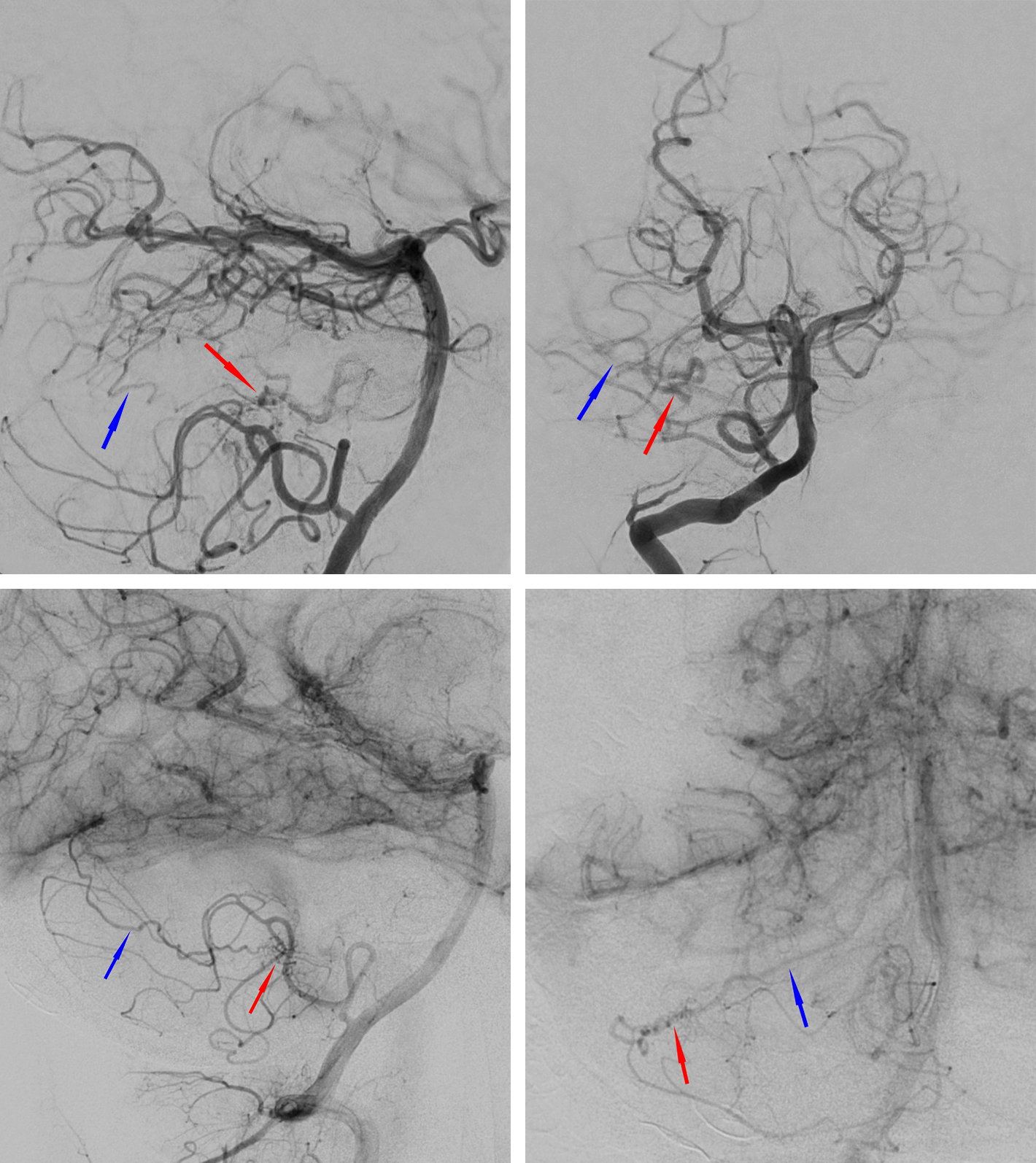 Unresectable AVMs may be treated endovascularly for the purpose of palliation in an attempt to reduce or prevent further neurologic decline caused by the AVM’s mass effect or vascular steal. This is a controversial tactic because the patient may have an elevated risk for subsequent hemorrhage after partial palliative embolization due to the alteration in flow dynamics. Nonetheless, palliative embolization has a defined role in reducing hemorrhage risk in patients with intranidal or flow-related aneurysms.

Partial surgical resection has been shown to convey no protective benefit and may in fact increase the risk of hemorrhage related to the alteration of flow dynamics within the residual AVM. Two surgical series have reported 10-fold higher risk for hemorrhage following partial resection compared with conservatively managed control cohorts.

When an immediate or delayed postoperative residual AVM is identified on imaging, the patient should undergo a repeat operation for excision. “Angiographic cure” conveys a protective benefit from hemorrhage and therefore should be the ultimate treatment goal.

The treatment history of the AVM is a known contributor to the efficacy of radiosurgical intervention. Previous embolization decreases the likelihood of subsequent stereotactic radiosurgical obliteration.

Despite the propensity for partial obliteration that accompanies embolization and radiosurgical intervention, there is a theoretic reduction in hemorrhage rates compared with their natural history.