Fourth ventricular tumors pose a surgical challenge, albeit less than their third ventricular counterparts, because of their relation to the brainstem; this relation can vary from simply displacement to invasion.

This technical challenge is further complicated because the tumor is often concealed by key cerebellar structures, including the cerebellar tonsils and hemispheres or the vermis. Tumors may involve adjacent structures through extension via the foramen of Luschka and by reaching the premedullary, cerebellomedullary, prepontine, and anterior spinal cisterns.

The major structures that compose the borders of the fourth ventricle along the craniocaudal extent are:

Tumors of the fourth ventricle commonly originate from the following structures composing the floor: the ependyma, choroid plexus, and tela choroidea. Lesions may also arise outside the ventricle and secondarily extend into this chamber, including medullary, tectal, and cerebellar hemispheric masses. These lesions are thus accessible via a fourth ventricular approach.

Importantly, preoperative magnetic resonance imaging (MRI) may be inconclusive with regard to the presence of brainstem invasion, and in fact, it can often be falsely indicative of invasion. Many fourth ventricular tumors, particularly those with an exophytic growth pattern, have a vascularized pedicle and demonstrate compression of the adjacent structures, but lack invasion.

Lateral extension into the fourth ventricle’s outlets typically occurs in medulloblastomas, ependymomas, and gliomas. This extension may progress to involve the foramen of Luschka and even cerebellopontine angle cisterns. This tumor configuration can facilitate cranial nerve involvement via tumor impingement or encasement. Similarly, caudal extension may progress via the obex to affect the superior cervical spinal cord and produce upper cervical myelopathy or even radiculopathy.

Figure 1: The typical location of a fourth ventricular tumor is demarcated. The surgical target is covered by the vermis and hemispheres. The tumor may extend to the level of the pineal region, requiring a combined telovelar and supracerebellar approach. Most large tumors can be resected via the telovelar route alone. Invasion of the floor is the limiting factor in achieving gross total resection (Redrawn from Tew, van Loveren, Keller*).

For a general discussion of diagnosis and evaluation for ventricular tumors, see the Principles of Intraventricular Surgery chapter where Table 1 provides a summary of radiologic features consistent with each tumor type. 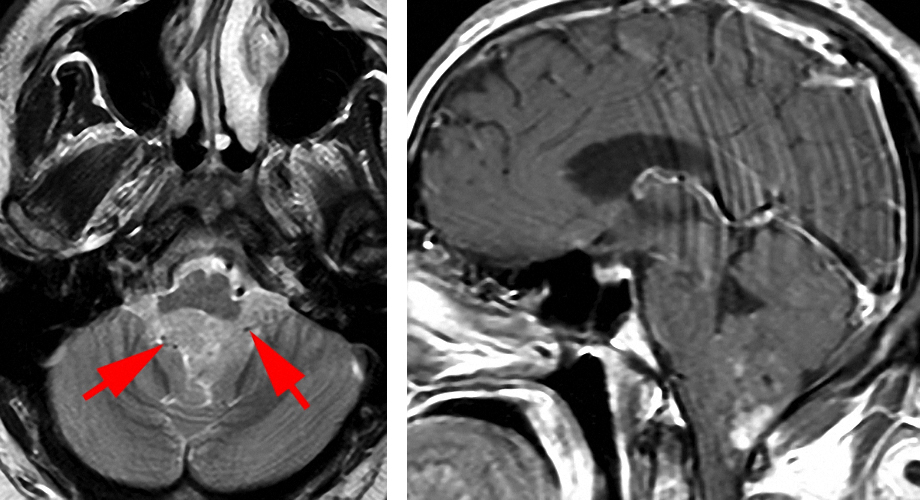 Figure 2: A typical ependymoma is shown. Note the partial encasement of the posterior inferior cerebellar artery (PICA) branches within the lateral aspects of the tumor (arrows). The tumor is partially enhancing and appears to be adherent to or invading the floor.

Indications for Surgery and Preoperative Considerations

For a general discussion of the indications for surgery and preoperative considerations for patients with ventricular tumors, see the Principles of Intraventricular Surgery chapter.

Neurophysiologic monitoring is recommended if manipulation of the brainstem or any of the cranial nerves is expected. Brainstem auditory evoked responses (BAERs) are highly sensitive to early signs of brainstem dysfunction. Fluctuation in vital signs may occur during manipulation of the floor and is a serious warning sign to halt retraction and dissection in the area.

The vascular structure most pertinent to a fourth ventricular approach is the posterior inferior cerebellar artery (PICA). 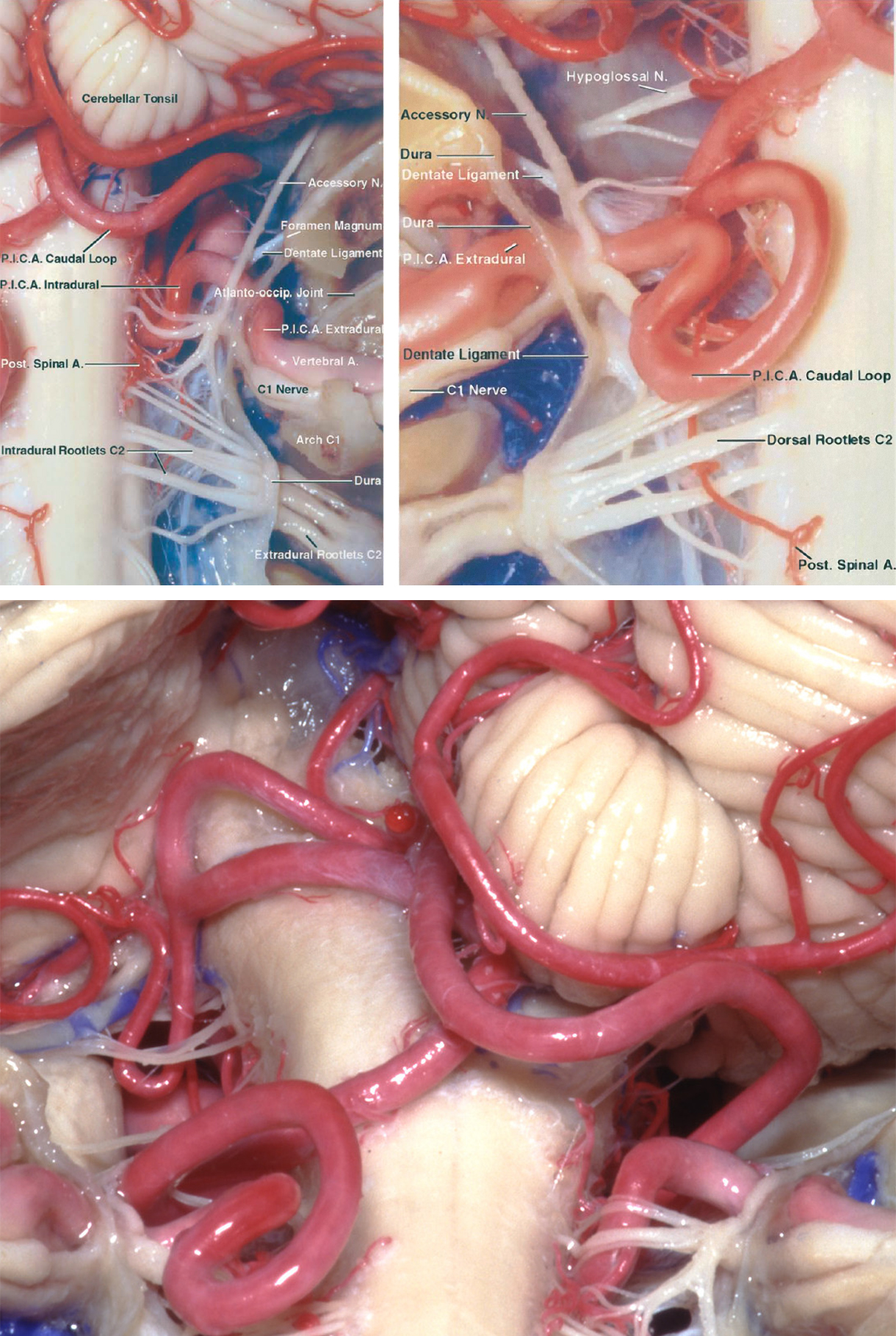 Figure 3: There are five segments of the PICA: anterior medullary, lateral medullary, tonsillomedullary, telovelotonsillar, and the cortical segments. Knowledge of the anatomic distribution of these segments is critical to successful navigation of the fourth ventricle and resection of the tumor. The first three branches listed are particularly important as they give rise to feeding vessels to the brainstem and tumors. Establishment of the arterial anatomy preoperatively is important for lessening the risk of ischemic injury. Tumors may also involve the vasculature of the choroid plexus or tela choroidea (image courtesy of AL Rhoton, Jr). 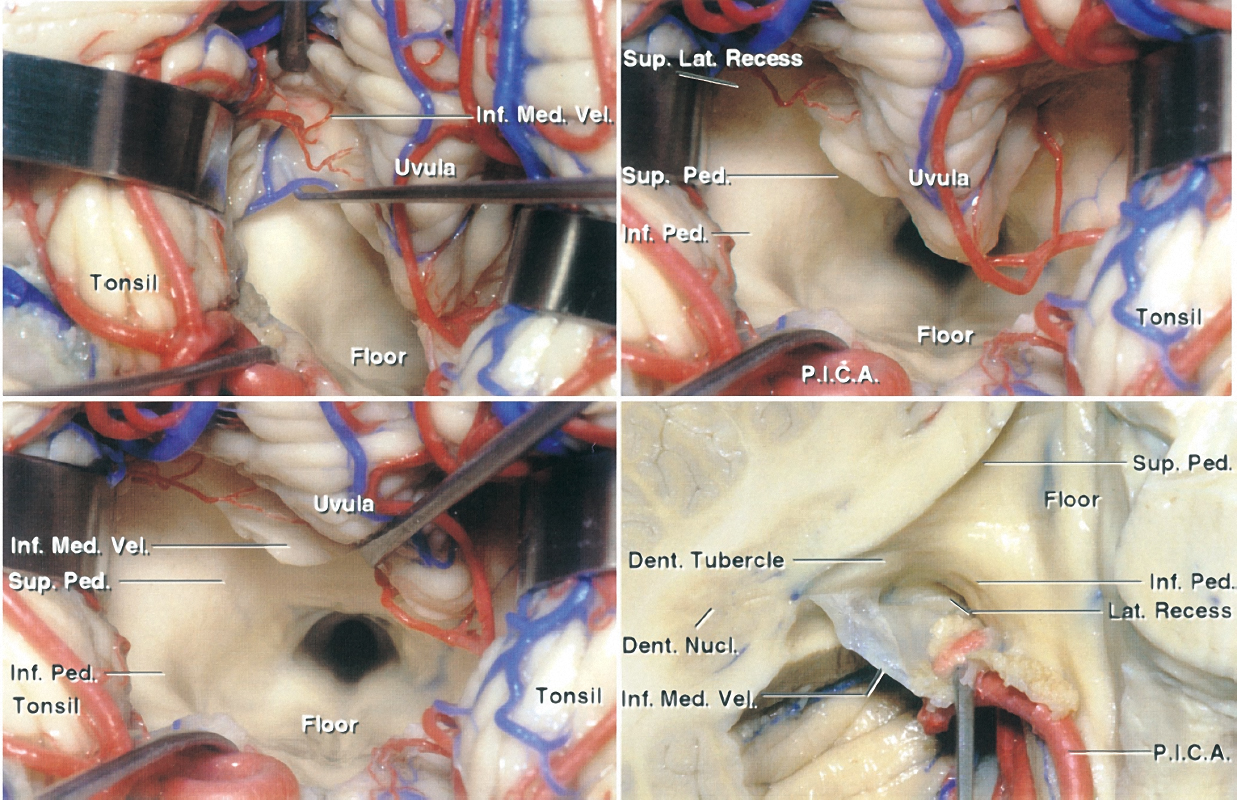 Figure 4: The basic principles of the telovelar approach are shown. Note the path of dissection medial to the tonsil and lateral to the vermis. A wide exposure of the ventricle is possible through an inferior-to-superior trajectory (images courtesy of AL Rhoton, Jr). For further details, please refer to chapter on telovelar approach. 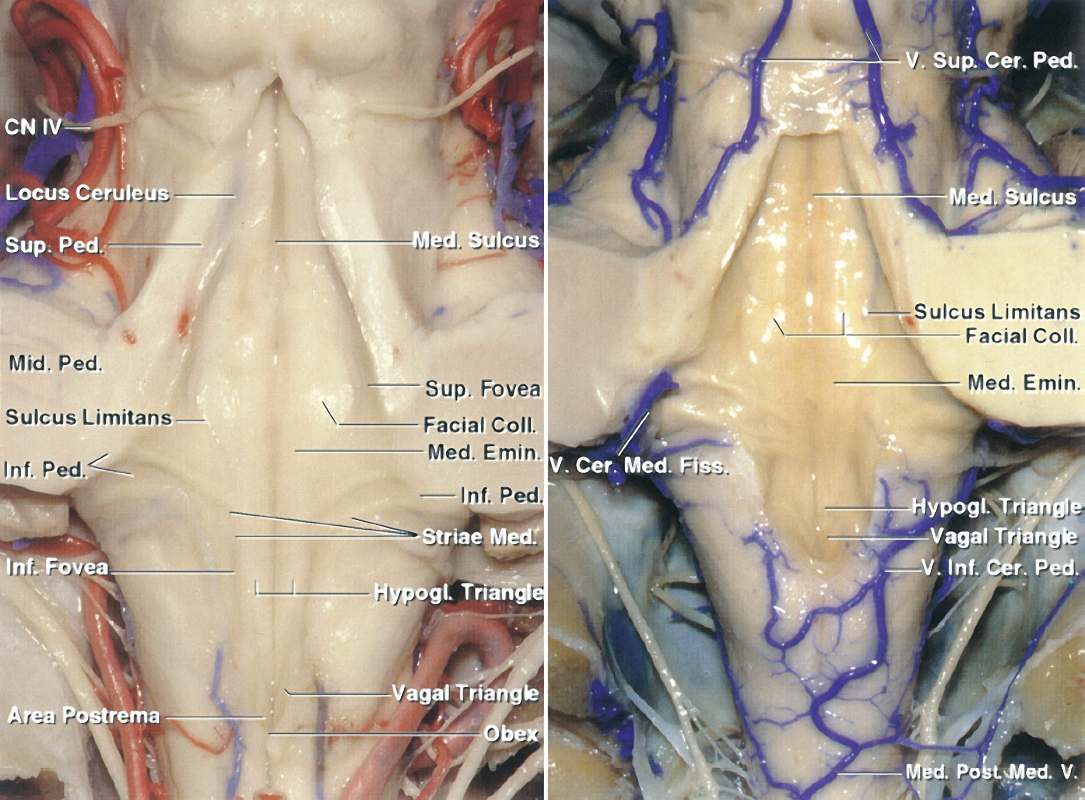 Figure 5: The topography of the eloquent fourth ventricular floor is mapped. The locations of the facial colliculus, as well as the hypoglossal and vagal triangles, are evident. Stimulation mapping can effectively guide the surgeon to avoid these critical structures during surgery of the floor (images courtesy of AL Rhoton, Jr).

Historically, the approach to fourth ventricular tumors involved either cerebellar hemisphere resection or vermian split. Vermian split syndrome is characterized by neurobehavioral abnormalities, imbalance, and cerebellar mutism. In an attempt to avoid these untoward side effects, an alternative approach has been designed.

The telovelar (transcerebellomedullary fissure) approach is flexible and allows resection of most lesions in this area. It facilitates generous exposure of most of the fourth ventricular space, with minimal disruption of the normal structures. For more details, please refer to the chapter on Telovelar Approach in the Cranial Approaches volume. 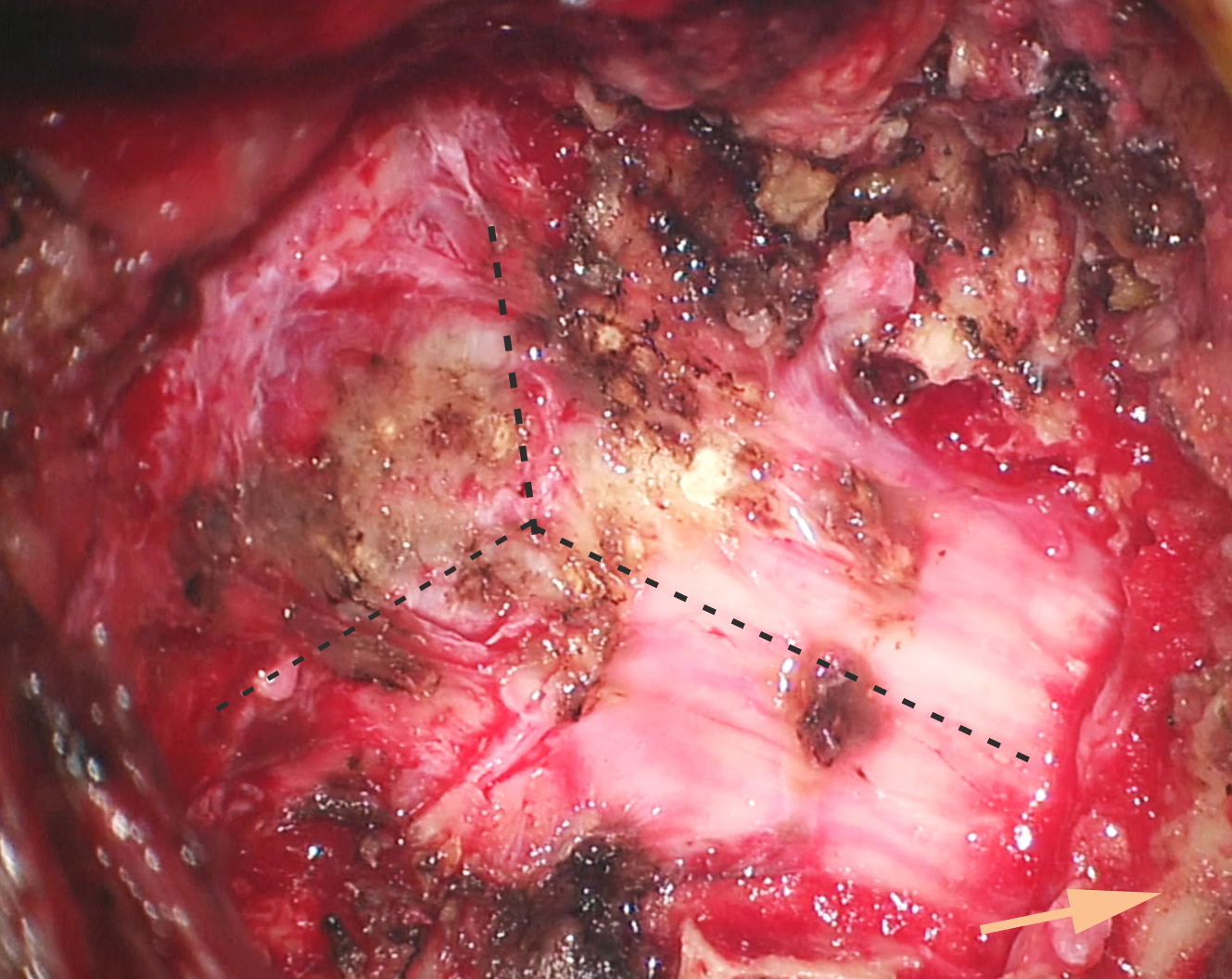 Figure 6: A limited suboccipital craniotomy is conducted with the patient in the lateral position (left “down”). The dura is incised in a Y-shaped fashion. A linear dural opening is an option for purely midline lesions; compared to the “Y” dural incision, the linear one can be readily closed in a watertight fashion. The C1 lamina is marked with an arrow. 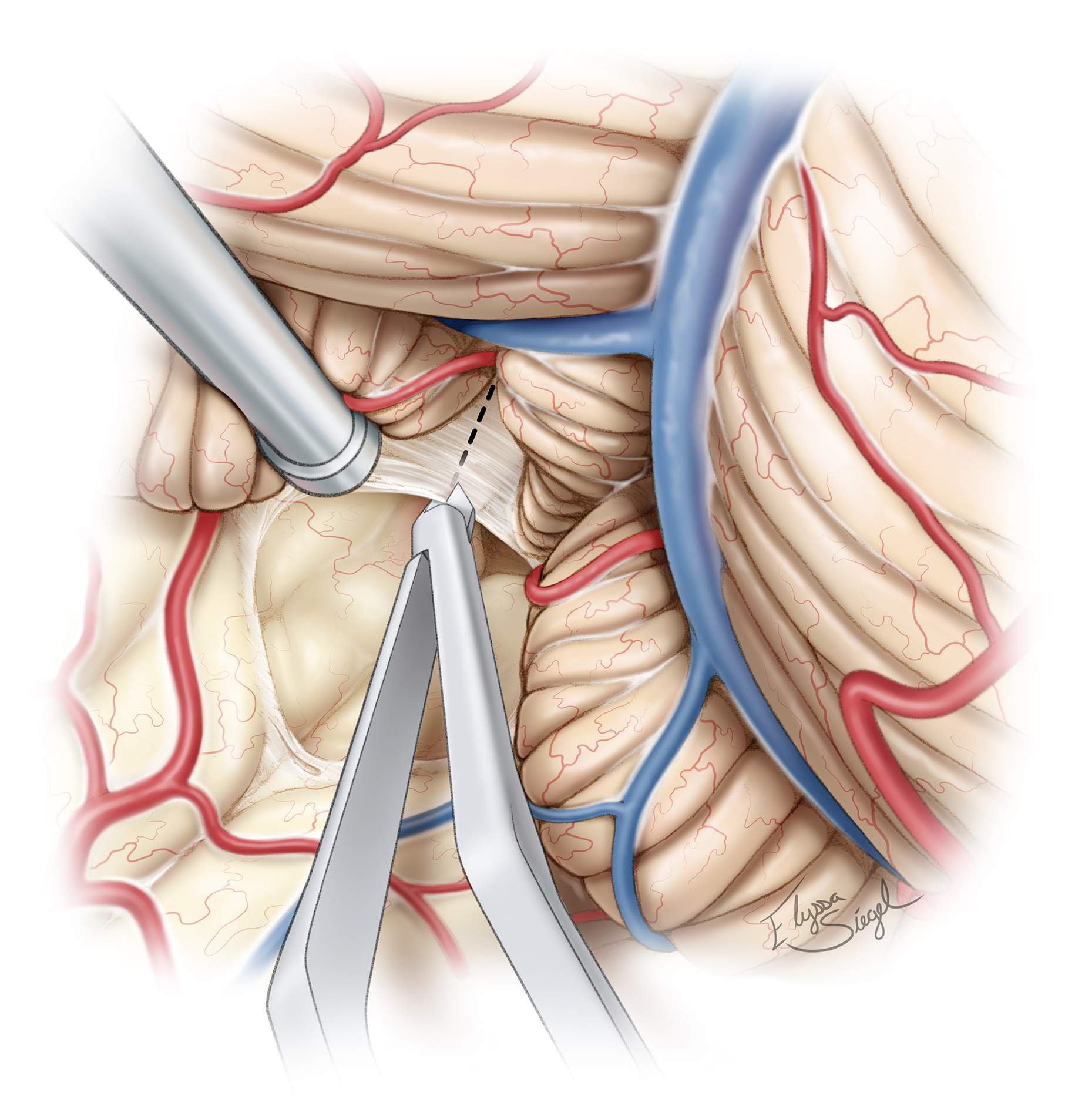 Figure 7: The telovelar approach provides the least invasive and most effective route to the fourth ventricle. 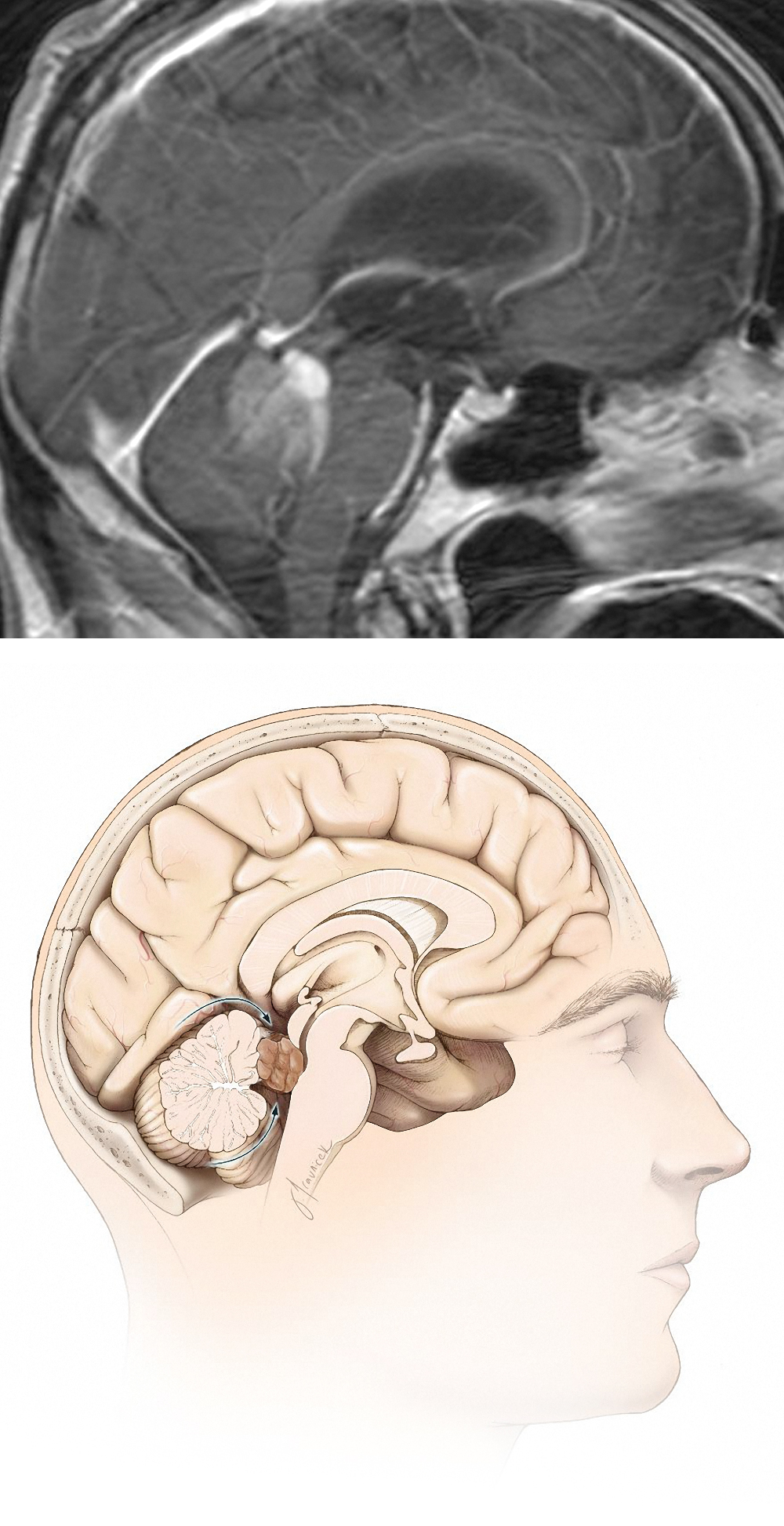 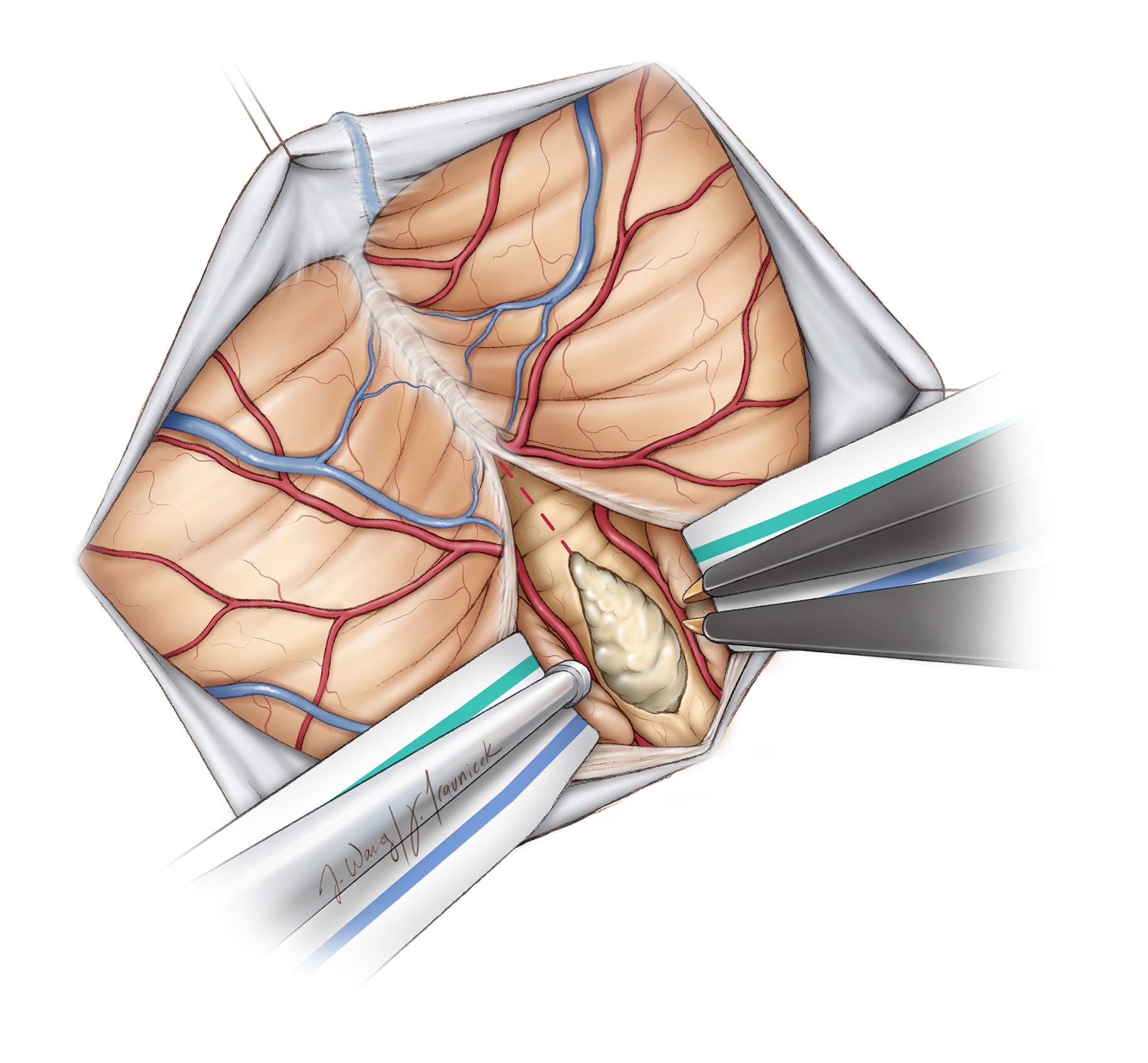 Figure 9: Optimal working angles for large or superior fourth ventricular lesions can be expanded by craniodorsal retraction or minimal transection of the inferior vermis attenuated by the mass effect of the tumor.

Most tumors have insertion points along the brachium pontis and potentially the lateral recesses, but rarely along the midline. An ultrasonic aspirator is used to remove the middle section of the tumor, which can usually be lifted off readily from the midline floor.

Figure 10: The PICA-perforating arteries are severed (left image). Microsurgical debulking and circumdissection of the tumor is conducted (right image). 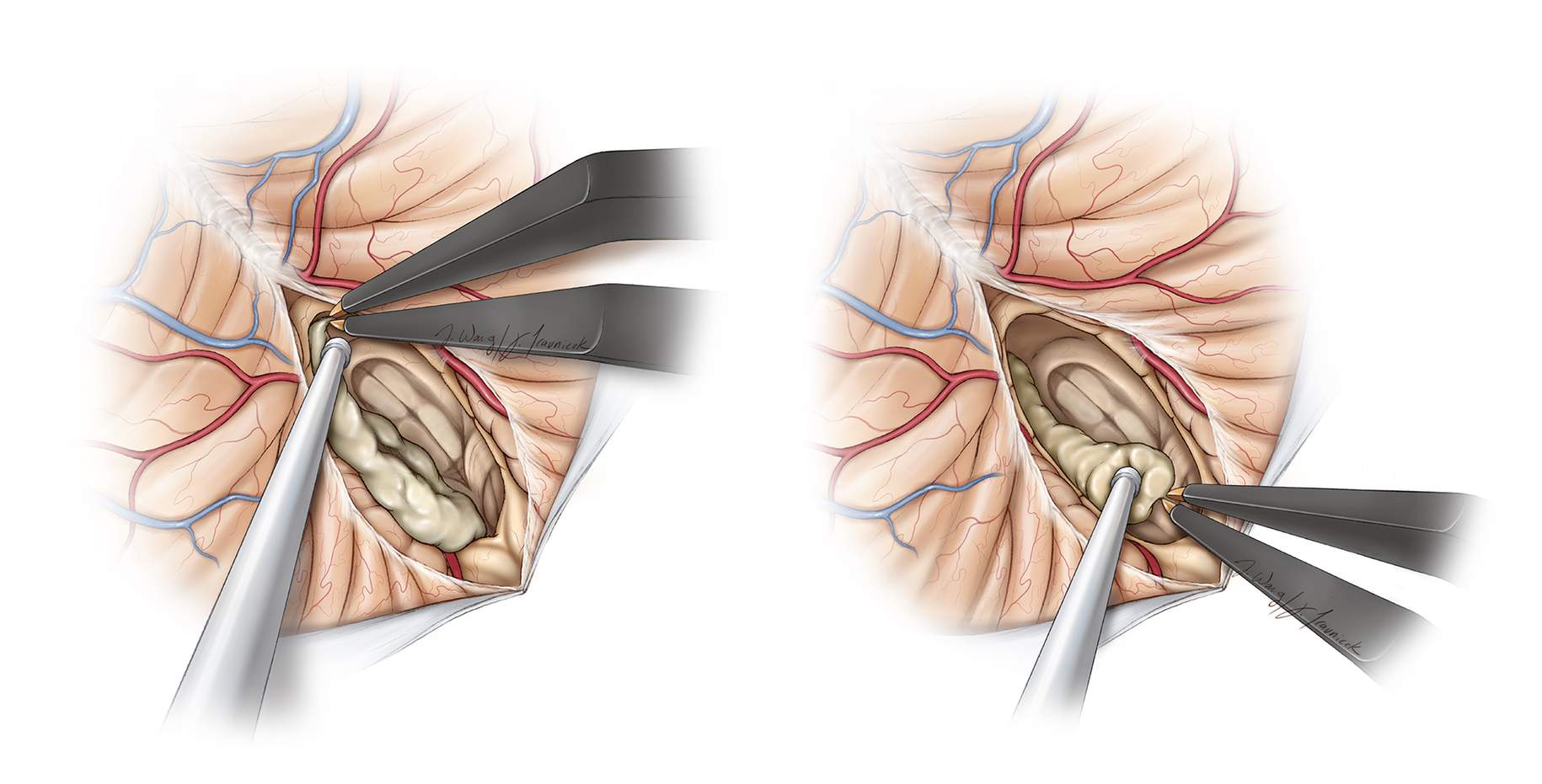 Figure 11: The superior pole of the tumor is debulked and mobilized (left image). Finally, the tumor along the floor is inspected (right image). Adherent tumor is left behind. Manipulation of the floor leads to significant mid to lower cranial nerve dysfunction and is not warranted (Redrawn from Tew, van Loveren, Keller*).

Figure 12: These intraoperative photos demonstrate the steps involved in resection of the ependymoma shown in Figure 2. The top two images show the tumor and microsurgical dissection of the right PICA. The bottom two images show tumor removal using ultrasonic aspiration while leaving a thin sheet of tumor over the infiltrated floor laterally (lower image-right brachium pontis).

Figure 13: The use of the telovelar approach for removal of a fourth ventricular dermoid (top MRIs-red arrow) is shown (middle photo). Following removal of the tumor contents, the adherent capsule is left on the floor and the entry into the aqueduct is apparent (lower photo).

For a detailed discussion of recommendations for postoperative care of patients with ventricular tumors, see the Principles of Intraventricular Surgery chapter.

A watertight dural closure is necessary since the ventricle is entered within the posterior fossa. I recommend the use of a short course of postoperative steroids to minimize the risk of aseptic meningitis. The bone flap is replaced or a cranioplasty attempted.