For general information, operative indications, and preoperative considerations, please refer to the chapter on the Principles of Dural Arteriovenous Fistula Surgery.

Please note the relevant information for patients suffering from arteriovenous fistula is presented in another chapter. Please click here for patient-related content.

If a dural arteriovenous fistula (dAVF) with cortical venous drainage offers no safe transarterial or transvenous access route, the fistula is addressed via microsurgical clip ligation. Examples of operative fistulas are ethmoidal, or anterior fossa and superior petrosal sinus or “tentorial” fistulas, which almost always demonstrate cortical venous drainage since they are not related to a functionally dominant venous sinus.

Intracranial hemorrhage is the most common presentation. The subtype of infratentorial dAVFs that is suitable for microsurgery is the superior petrosal dAVFs.

Figure 1: A petrosal dAVF may rarely lead to symptomatic venous hypertension within the brainstem (left image). A lateral internal carotid artery (ICA) angiogram (right) demonstrates a petrosal dAVF supplied by tentorial feeders from the ICA and draining into the petrosal vein with arterialization of the posterior fossa veins.

Superior petrosal dAVFs are also difficult to access endovascularly from either the arterial or venous side. They feed from the tentorial branches of the internal carotid artery (ICA), such as the tentorial artery of Bernasconi and Casinari, the inferolateral trunk, and the meningohypophyseal trunk, as well as the external carotid branches such as the middle meningeal and ascending pharyngeal arteries. They drain into the arterialized petrosal vein and may produce supratentorial or infratentorial arterialized venous drainage.

These lesions are usually easily treated via clip ligation of the arterialized petrosal vein(s) through the retrosigmoid approach.

As shown by their natural history, untreated dAVFs associated with cortical venous drainage carry a high risk of morbidity and mortality. Such dAVFs must be treated with occlusion of the venous side of the fistula; arterial occlusion alone will not result in an effective and durable cure.

Unlike arteriovenous malformations, which have niduses that reside within the parenchyma and are subject to hemorrhage in case of venous occlusion before all arterial feeders are disconnected, the dAVF’s niduses (or fistulas) are within the contained thickened leaves of the dura. Therefore, venous occlusion is safe and curative.

The numerous small tentorial branches that supply the petrosal dAVFs make the transarterial route challenging, and in addition, transvenous access to the corresponding arterialized veins is not straightforward. Microsurgical fistula disconnection remains a very reasonable, safe, and effective strategy for this specific subtype.

The surgical approach to clipping a petrosal dAVF is through the retrosigmoid craniotomy. It is similar to the approach for microvascular decompression for trigeminal neuralgia, during which the petrosal vein is seen overlying the trigeminal nerve. Although the fistula appears complicated on the preoperative angiogram, ligation of the arterialized petrosal vein(s) as it(they) enter(s) the dura is curative and technically straightforward.

A retrosigmoid craniotomy is performed based on the junction of the transverse-sigmoid sinuses. 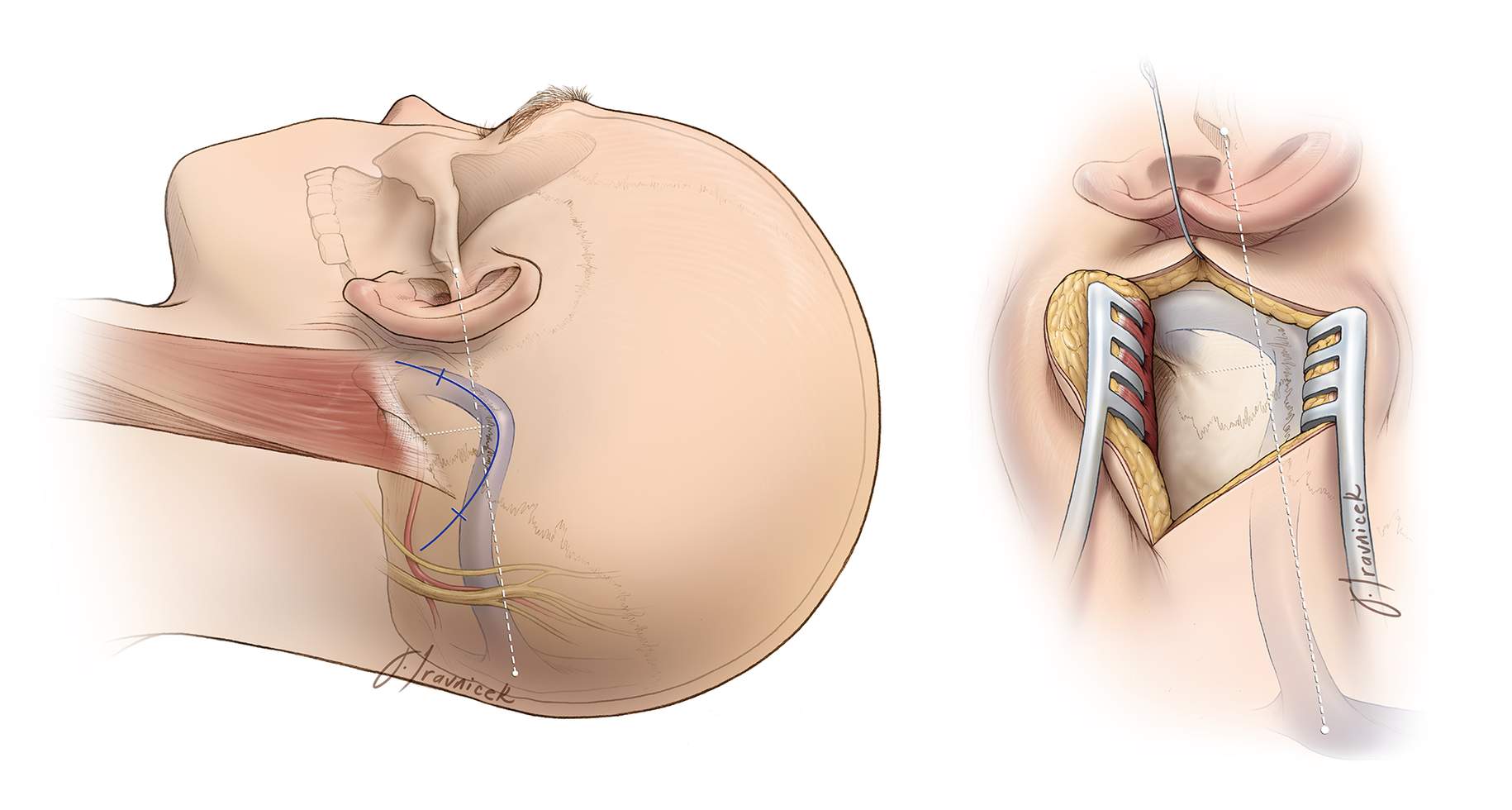 Figure 2: Positioning and anatomic landmarks for a left-sided retrosigmoid craniotomy are shown. The transverse sinus may be approximated by a line traveling from the root of the zygoma to the inion (dotted white line), and the sigmoid sinus runs just anterior the vertical line passing through the mastoid groove.

Once the dura has been incised and tacked up, the junction of the tentorium and the petrous bone is used as the landmark to find the arterialized petrosal vein(s) at their entrance into the tentorium. The main arterialized draining vein is isolated from the surrounding normal veins and the trigeminal nerve, and a permanent straight clip is placed across it to ensure that it turns blue. One or more of the superior petrosal veins may be arterialized. A fluorescence videoangiogram confirms the lack of flow within the target vein. The vein can then be disconnected from all of its dural attachments.

I inquire about an intraoperative angiogram for complex fistulas to assure myself that none of the arterialized veins have been overlooked. 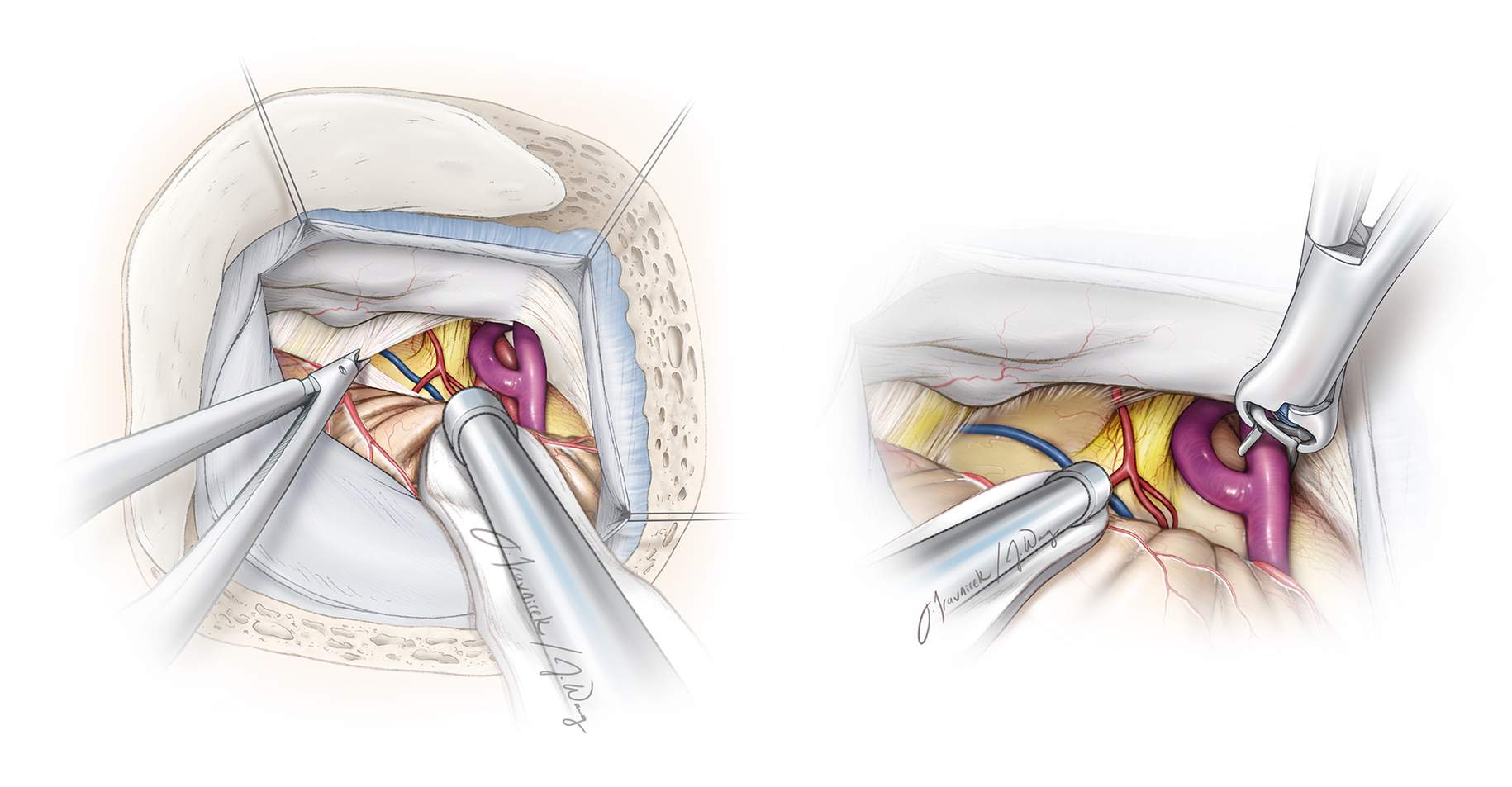 Figure 3. The arterialized petrosal vein is exposed through a left-sided retrosigmoid craniotomy. The arterialized vein is just superficial to the trigeminal nerve and entering the tentorial dura, where a clip is placed to disconnect the fistula.

Figure 4: Note that the fistula may be complex and have multiple arterialized veins rather than just one. Fluorescence videoangiography can identify early filling of specific branches of the superior petrosal vein that require disconnection. Aggressive coagulation of the fistula without its clip ligation should be avoided because engorged veins harbor attenuated walls and can easily tear, leading to torrential bleeding that is difficult to control. Packing of the bleeding site at the level of the tentorium with Gelfoam and coagulation of the other end of the torn arterialized vein over the cerebellum is needed if inadvertent rupture of the fistula occurs.

The nidus of the fistula, usually located in the tentorium, does not need to be resected; this consideration avoids the risk of significant blood loss.

Figure 5: This young patient presented with acute subarachnoid hemorrhage within the cerebellopontine angle cisterns. A three-dimensional angiogram (top image) demonstrated a left petrosal fistula/draining vein (arrow) at the tentorium and an associated posterior fossa venous varix. Intraoperative findings (middle photo) show the main draining vein (arrow) and cranial nerve (CN) V. The primary draining vein has two branches, and the clip must be placed near the tentorium to occlude both of these branches. The fistulous connection was subsequently coagulated and cut (bottom photo). 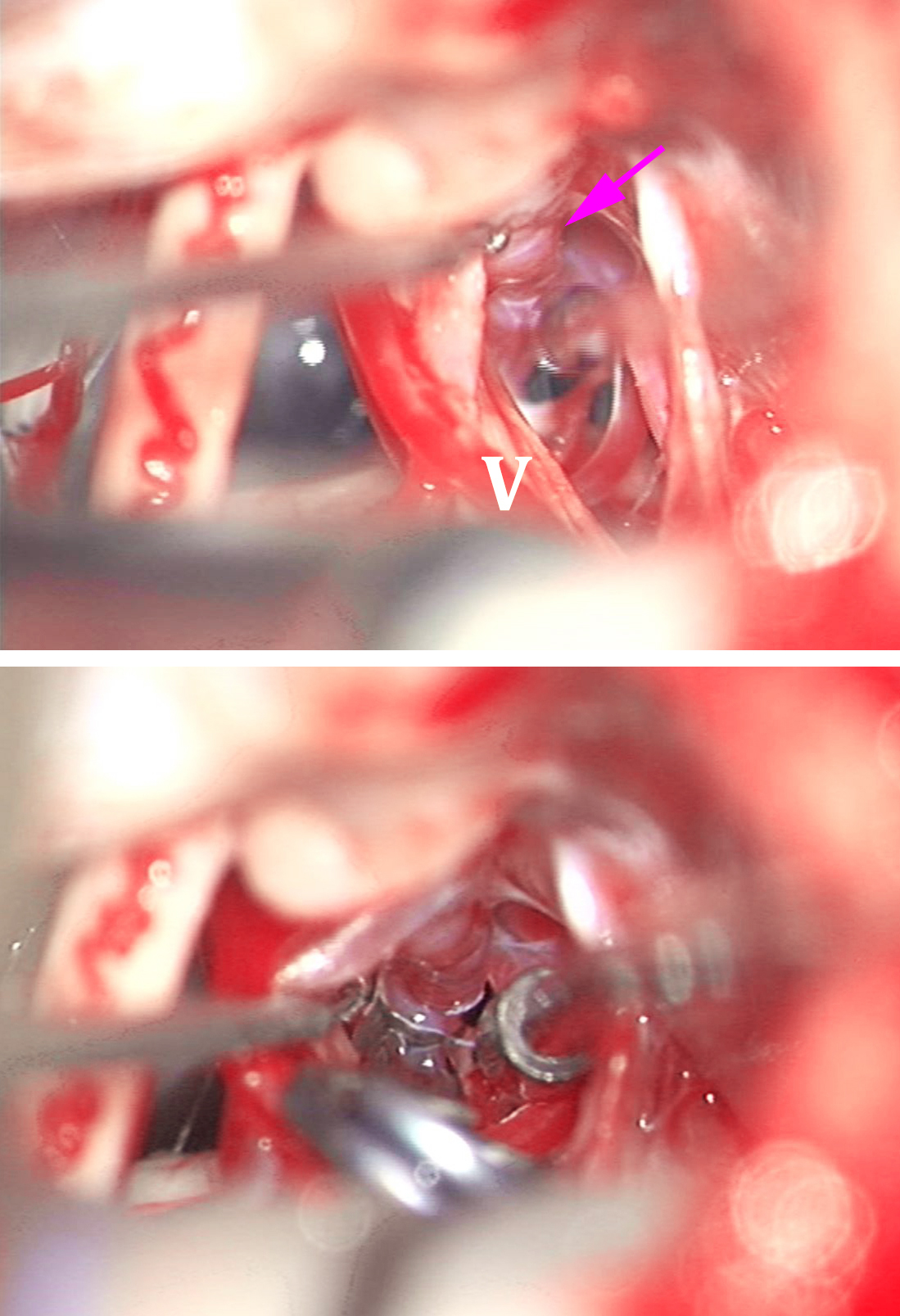 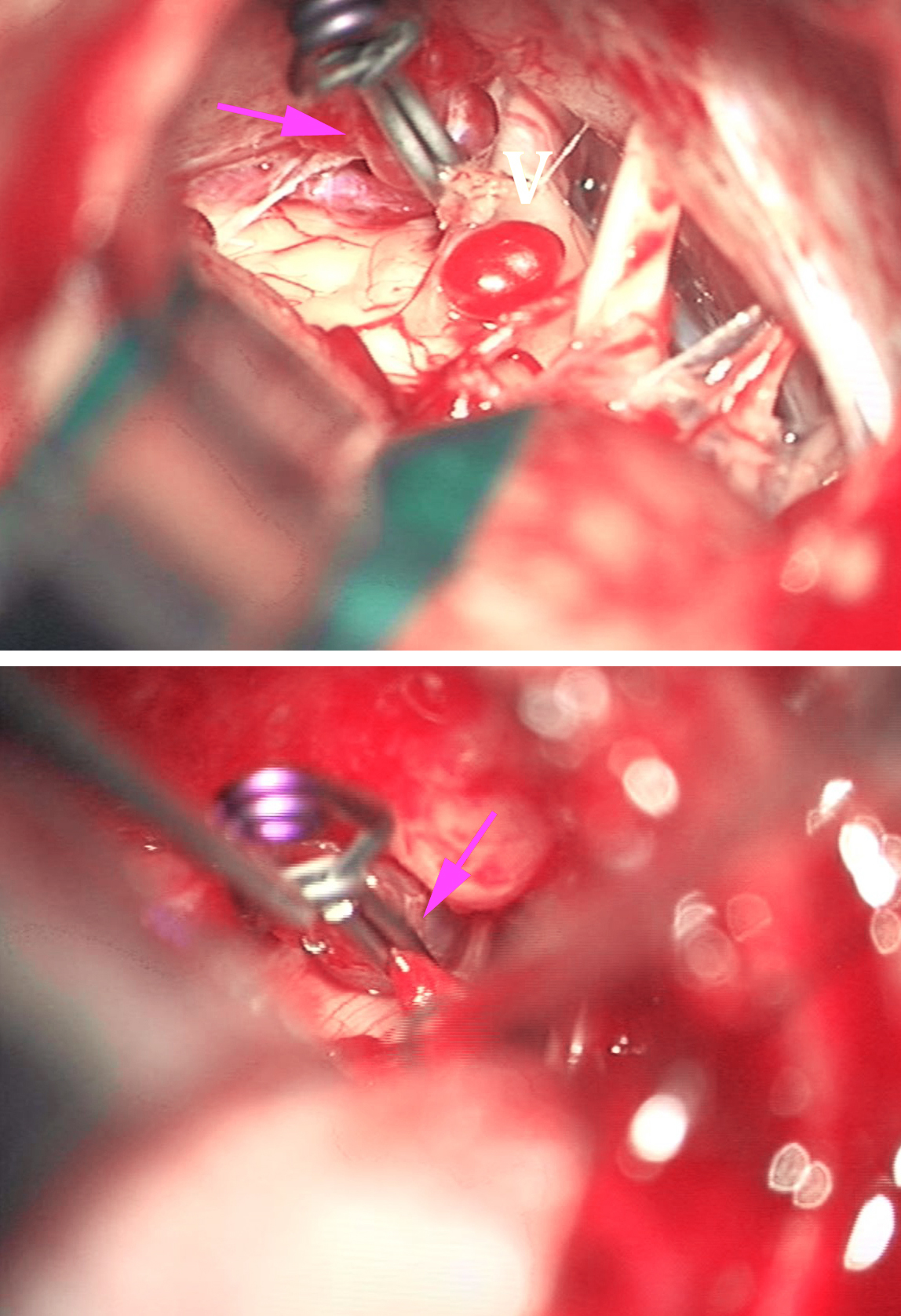 The dAVFs in this location may be divided into six subtypes: galenic, straight sinus, torcular, tentorial sinus, superior petrosal sinus, and incisural. Except for the petrosal fistulas, the other subtypes are either exceedingly rare or primarily managed via endovascular intervention. The following general operative recommendations regarding these rare subtypes can be made.

Figure 8: These AP and lateral ECA angiograms (top row, arrows) demonstrate a left tentorial dAVF supplied by the middle meningeal artery branches. The supratentorial arterialized cortical vein is associated with a small varix in the posterior temporal region. This varix ultimately drains into the left transverse sinus. The arterialized vein over the posterior tentorium (middle image, purple arrow) was exposed via an infraoccipital/subtemporal craniotomy; the location of the vein of Labbe is marked with a blue arrow. A clip disconnected the fistula at its exit site and proximal to the varix at the level of the tentorium (bottom photo).