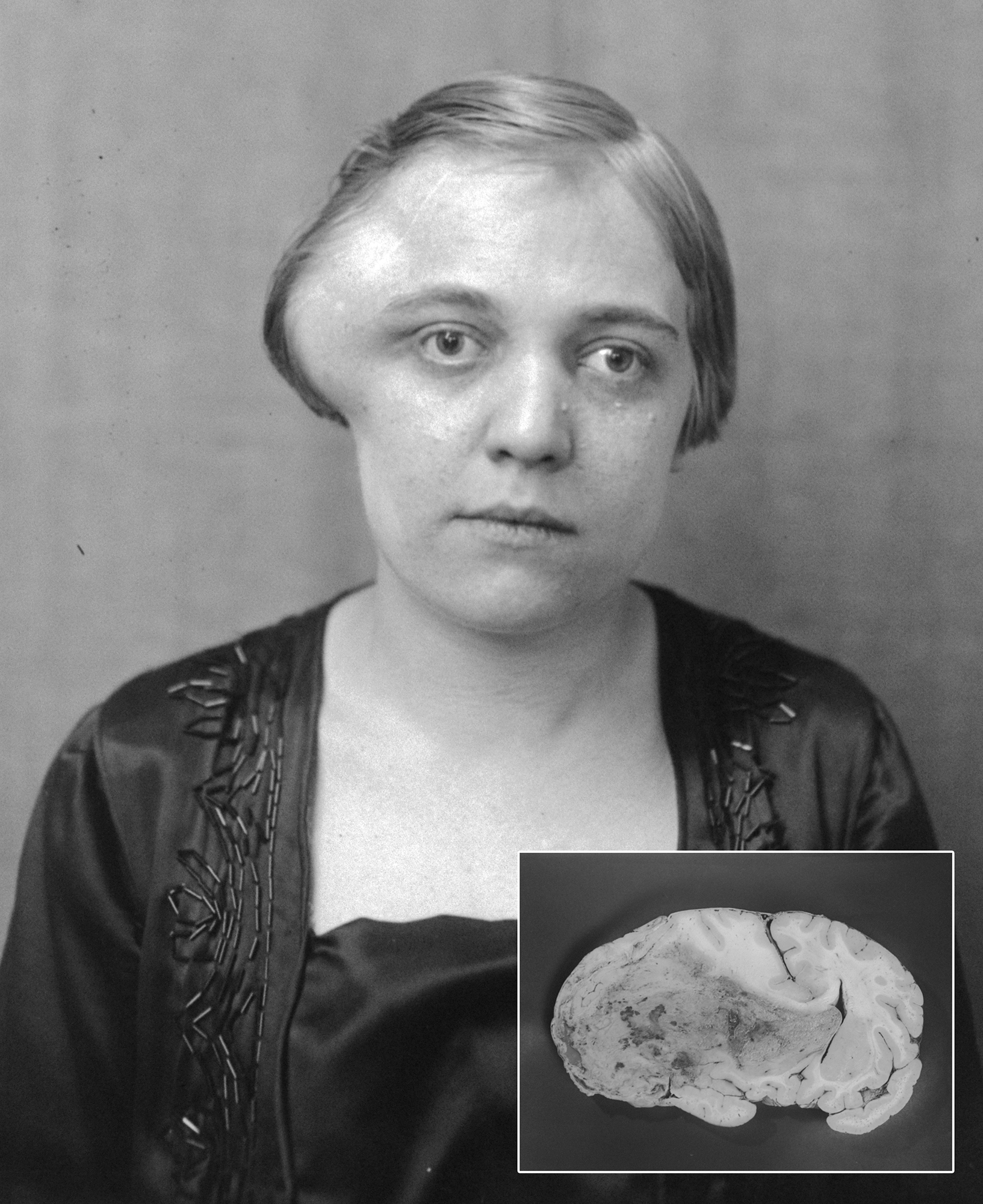 Figure 1: Subtemporal decompression was the safestest method of dealing with tumors and relieving intracranial tension during infancy of neurosurgery (1907-1917). In the absence of localizing signs by the tumor, subtemporal decompression relieved life-threatening tension until more localizing signs developed, allowing more aggressive resection as neurosurgical techniques advanced. In this image, Cushing demonstrates the autopsy specimen of this patient suffering from a glioma, causing brain swelling and cerebral herniation through the craniectomy defect (inset)(Courtesy of the Cushing Brain Tumor Registry at Yale University).

Primary cerebral edema may be classified as osmotic, hydrocephalic, vasogenic, cytotoxic, and hydrostatic. Brain swelling can also be included in these classifications and grouped into those with known or unknown etiologies.

Cytotoxic edema is an intracellular edema that develops with the failure of energy-dependent ion channels. As a result, sodium influxes into the cells lead to an intracellular shift of water molecules. The energy-producing apparatus of the cell is the mitochondria. Energy failure can be the result of mitochondrial damage in a patient with ischemia.

The blood-brain barrier is intact in this type of edema, so there is no enhancement on imaging, whereas impairment of this barrier is the key mechanism in vasogenic edema. Reduction in serum osmolality leads to osmotic brain edema, which is usually seen in syndrome of inappropriate antidiuretic hormone secretion (SIADH). High-pressure obstructive hydrocephalus is the cause of periventricular extravasation of water in hydrocephalic brain edema. Sudden decompression of a mass lesion may cause hydrostatic edema, which is caused by the accumulation of low-protein fluids around the cells.

More than one mechanism can lead to the development of brain swelling, and the neurosurgeon should rapidly investigate and relieve the cause. Ischemia, an important etiology of brain swelling, is at first cytotoxic in nature. When the cerebral blood flow drops below 10ml/100 g/min, mitochondrial dysfunction occurs. As a result, ion exchange pumps fail and cytotoxic edema develops. Later in the course of ischemia, the blood-brain barrier breaks down and vasogenic edema leads to extracellular extravasation of serum proteins.

In virtually all brain injuries, there is a degree of brain swelling that can lead to raised intracranial pressure. Swelling develops around contusions and hemorrhages. Mechanistically, a combination of vascular damage, vasogenic edema, ischemic edema, and cytotoxic edema can contribute to this condition.

Central areas of contusions have high osmolality, and osmotic edema can also contribute to brain swelling. Acute subdural hematoma can cause diffuse swelling of one hemisphere, a condition that can also happen with large epidural hematomas. Diffuse brain swelling may also develop from even minor head trauma, a condition that especially occurs in children. The mechanism of this catastrophic condition is poorly understood and often unresponsive to traditional treatments.

Acute uncontrolled intraoperative brain swelling is one of the most dreadful events in the work life of a surgeon. Swelling of all or parts of the brain can be primary or secondary. The management principles are critical for patient safety, and they make the most difference in the outcome of surgery. Preoperative planning to expect and relieve intracranial hypertension is important. Preplanning to prevent cerebral swelling is more effective than treating it when it occurs. Most often, the preoperative diagnosed hematoma, tumor, or cyst is the cause, and their immediate decompression relieves the tension.

The most common cases of catastrophic intraoperative brain swelling include the following:

In the management of brain swelling, the surgeon should pursue every possibility to identify the underlying cause. Meanwhile, general measures can subdue the intense tension and limit injury. Raising the head of the bed and administration of Propofol (Diprivan) can facilitate some reduction in acute cerebral swelling. Using Propofol, I have had great success in some circumstances to relieve primary brain swelling during surgery within the posterior fossa.

Extra care should be taken in pursuing aggressive hypotension since it may lead to ischemia. End tidal pCO2 measurements ensure the patency of the endotracheal tube. In more than one of my own patients, a delayed realization that the endotracheal tube was kinking near the front teeth led to an intensely acute increase in cerebral tension. Relief of the kink immediately relieved the tension.

General measures to lower intracranial pressure will help reverse intense spikes in cranial tension. They include a bolus of 1 g/kg IV Mannitol, CSF drainage through ventriculostomy, and burst suppression.

A sudden intense increase in cranial tension with no known reasonable cause despite diligent search could be accounted for by an intraoperative seizure. If this is suspected, ice-cold saline irrigation and intravenous benzodiazepines should be used. In the search for a deep subcortical expanding hematoma, intraoperative ultrasound can be very revealing. Relaxation of the dura where it is tenting and obstructing a venous sinus can also reduce swelling.

Placement of an external ventricular drain is very beneficial in the management of brain swelling of unknown etiology. It can also be diagnostic. When all measures fail and the underlying etiology is not identified, decompressive craniectomy by enlarging the craniotomy flap is recommended. The skin incision is enlarged and then closed without dural closure or bone flap replacement. This maneuver can give the team enough time to obtain an emergency CT scan. The patient may require re-opening and extension of the craniotomy based on the imaging findings.

The last attempt that can be lifesaving in some situations is further expansion of the craniotomy followed by partial or total removal of the uncontrollably swollen pathologic brain. This resection should be performed wisely with advisement of the eloquent cortex.