The peritoneum is the preferred distal terminus of a cerebrospinal fluid (CSF) shunt. However, other anatomic locations must be considered when the peritoneum is not suitable, such as in patients with infection or enough adhesions to prevent effective CSF absorption. Other potential distal sites include the pleural space, gallbladder, and cardiac atrium.

Ventriculopleural (VPL) shunts divert CSF into the absorptive pleural space. They are generally considered a second-line option and have higher failure and complication rates than do ventriculoperitoneal (VP) shunts.1,2 However, VPL shunts can work quite well and are a viable option if the more common distal sites are unusable.3 VPL and VP shunts have similar infection rates.

There are specific considerations for patients with VPL shunts. A small, asymptomatic pleural effusion is often visible via chest radiography. This finding is expected and does not require treatment. If the pleural space does not absorb the CSF adequately, the effusion might grow, become symptomatic, or cause a life-threatening tension hydrothorax.4 The risk of symptomatic pleural effusion is decreased in patients with a shunt valve with an antisiphon feature.1 Other described VPL shunt complications include fibrothorax, empyema, and pneumothorax. The pleura is innervated, and patients can feel pain from the distal catheter.

Surgical planning begins with an evaluation of the patient’s ventricular anatomy, respiratory capacity, and overall condition. Patients with significant pulmonary dysfunction or restricted lung capacity are not good candidates for VPL shunts. Younger children and infants have a smaller chest cavity and absorptive pleural surface area than adults. Therefore, infants have a much higher risk of shunt failure and symptomatic pleural effusion than older patients.1 Most surgeons wait until a child is at least 7 years old before placing a VPL shunt.

A 1-way shunt valve should be chosen. The distal resistance of VP and ventriculoatrial shunts is assumed to be close to zero in most patients. However, VPL shunts are exposed to a negative, subatmospheric intrathoracic pressure with each breathing cycle, which imparts an active “sucking” force. This force can lead to shunt overdrainage, intracranial hypotension, slit ventricles, and a substantial pleural effusion. It is critical to choose a valve system with an antisiphon feature.5 No consensus exists regarding the use of adjustable- versus fixed-resistance valves, although many surgeons prefer programmable valves for VPL shunts.

A protocol for minimizing the risk of shunt infection should be employed.6 All operative personnel should double-glove their hands for the entire procedure.

The patient is positioned supine on the operating table. I prefer to use fluoroscopy for placement of the distal catheter. Therefore, the patient must be positioned in a way that facilitates use of the C-arm. The patient’s arm is abducted, and the head is positioned to facilitate placement of the proximal catheter. The neck is extended slightly such that the mastoid process lies in the same horizontal plane as the clavicle, which facilitates maneuvering the shunt passer between the cranial and chest incisions. 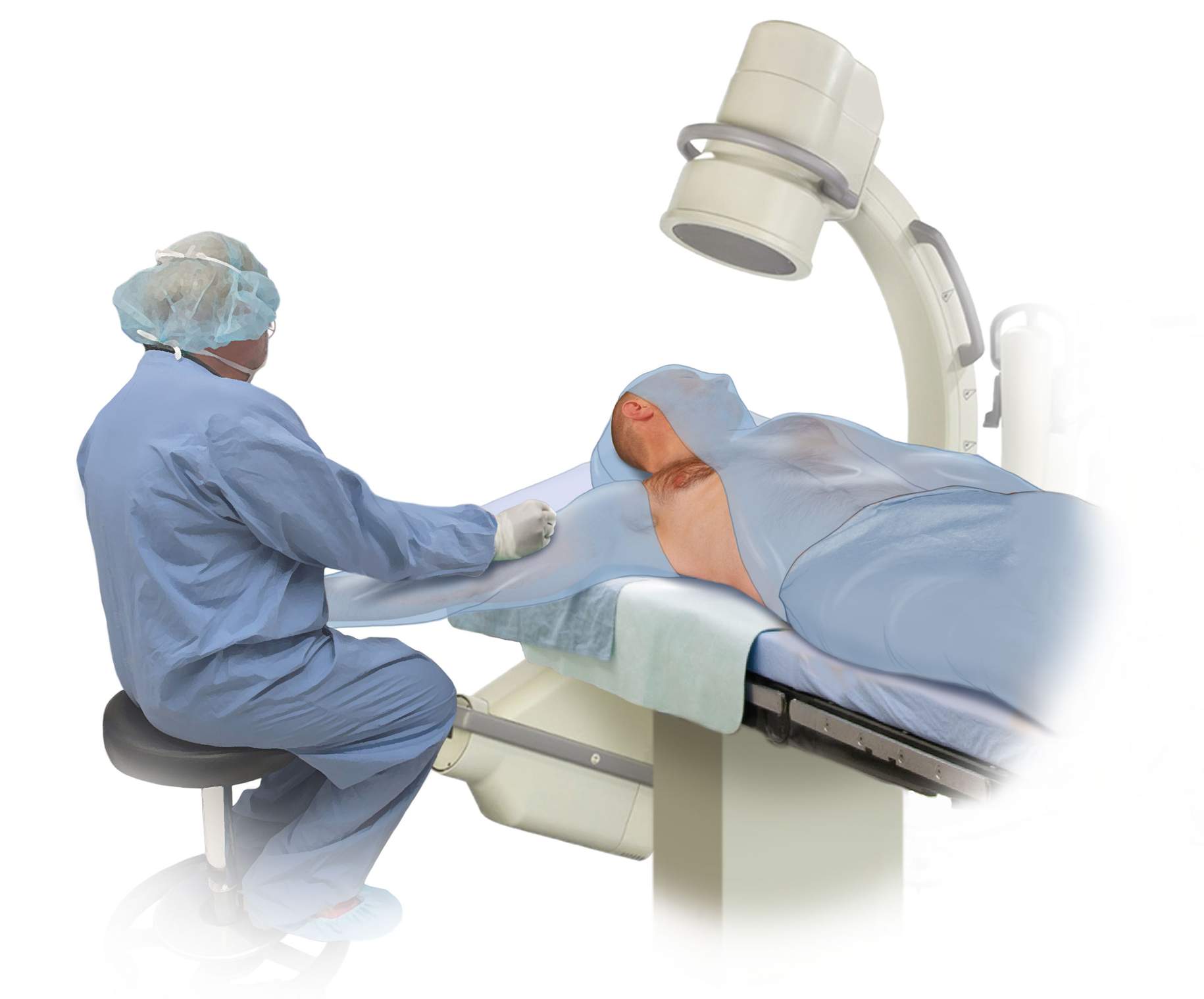 Figure 1: The patient is positioned with the arm abducted and extended to allow access to the midaxillary line. The neck is extended such that the mastoid process and the clavicle lie in relatively the same horizontal plane. The C-arm is used to confirm placement of the distal catheter.

Intracranial catheter placement is performed in the same manner as VP shunt placement. This technique is described in more detail in the VP shunt chapter.

The proximal catheter and shunt system are placed, and the distal catheter is passed subcutaneously to the incision on the chest. Distal flow is confirmed. Multiple entry points to the pleural space have been described.7

I make a small (2- to 3-cm) incision parallel to the ribs through the space between either ribs 3 and 4 or ribs 4 and 5, near the midaxillary line. This incision is lateral to the nipple line. A fine hemostat is used to dissect through the subcutaneous tissue and muscle until the ribs can be palpated. The entry to the pleural space is made just superior to a rib to avoid the neurovascular bundle located on the underside of the rib. The trajectory of the approach is horizontal to the floor. A figure-8 suture is placed in the muscle at the entry site but is not tied. 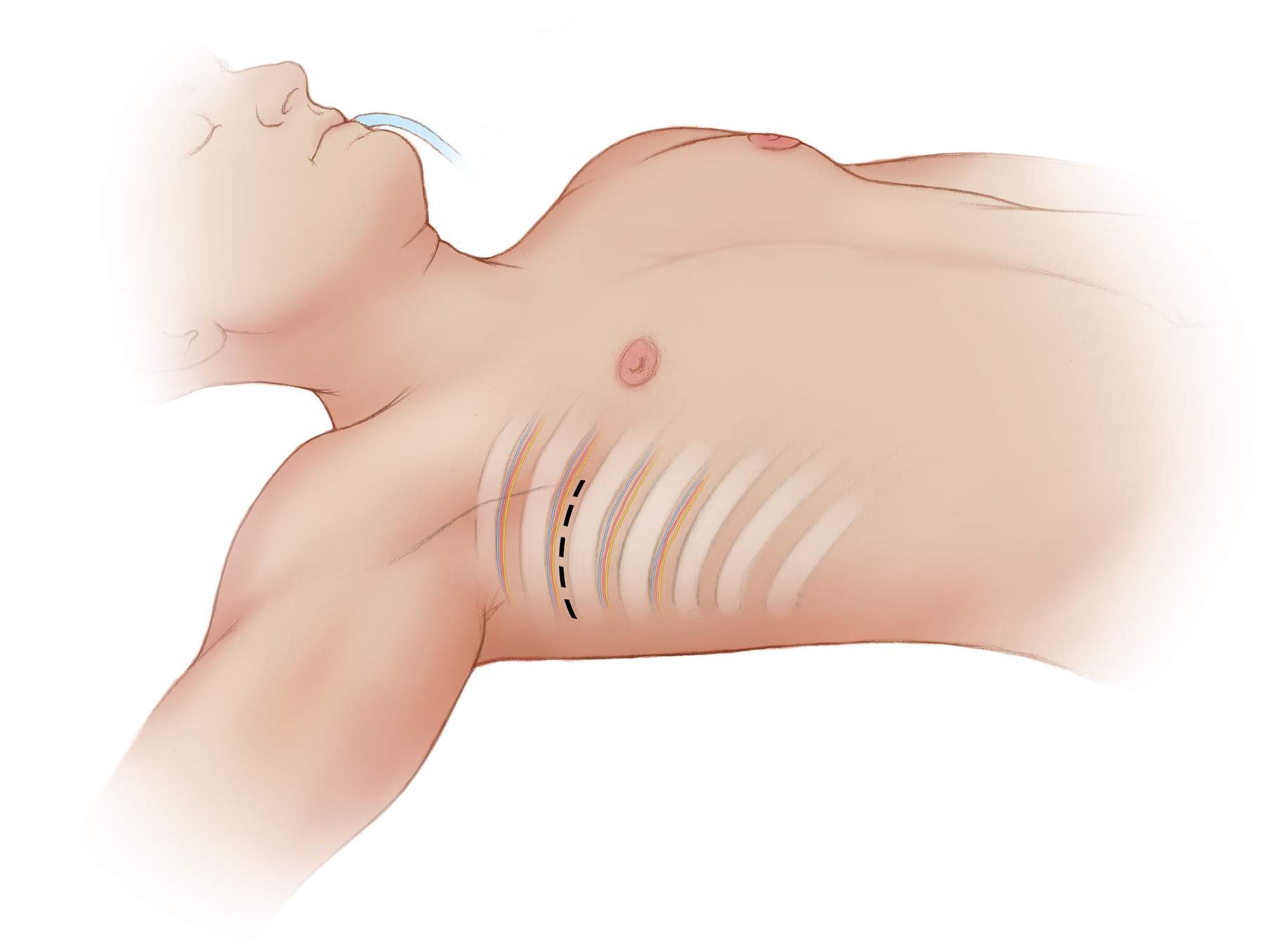 Figure 2: A 2- to 3-cm incision is made parallel to the ribs in the intercostal space in the midaxillary line. This is placed approximately between the third and fifth rib and is lateral to the nipple line. 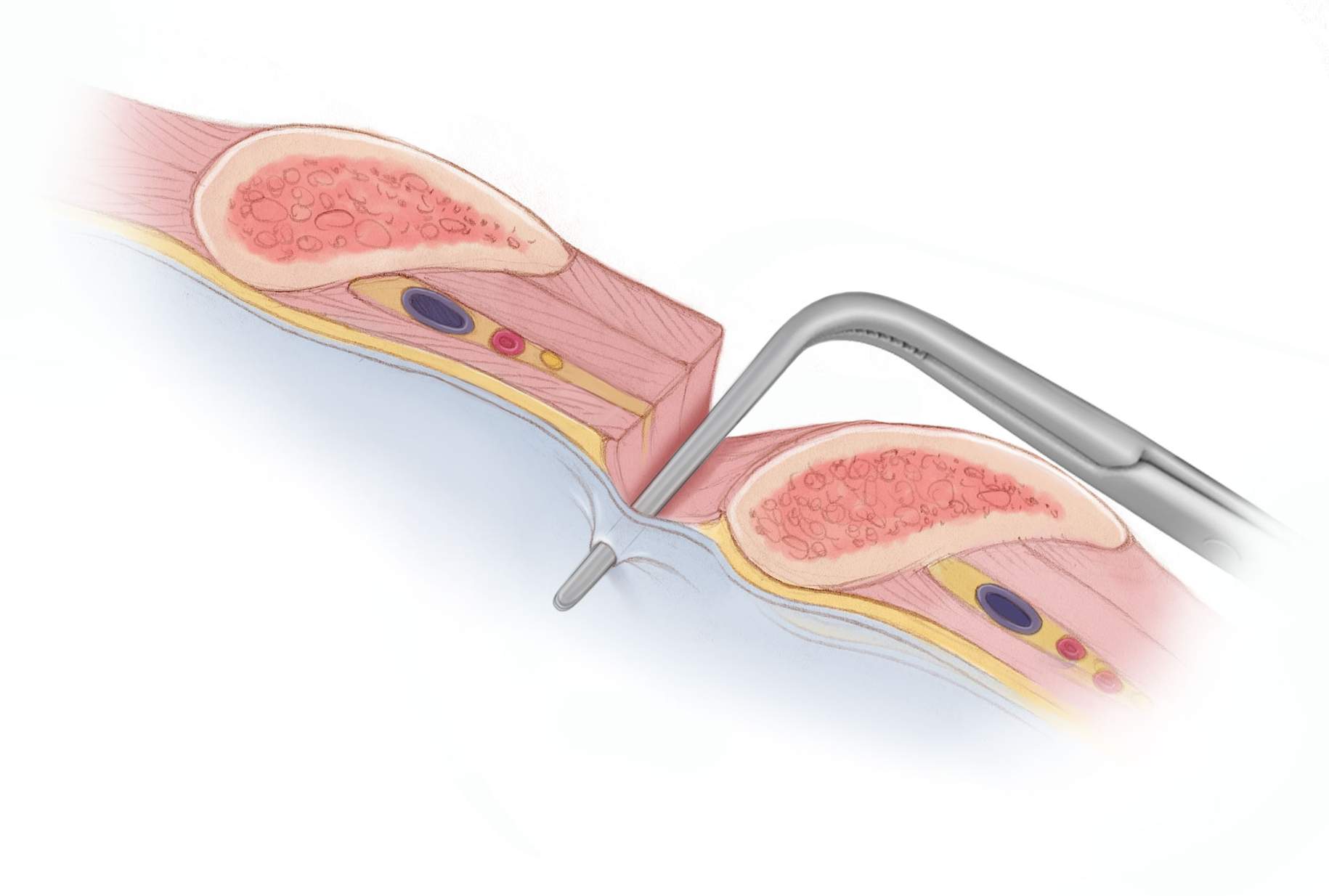 Figure 3: A fine instrument is used to dissect the muscle and puncture the pleura. The dissection should follow the top of a rib to avoid the underlying neurovascular bundle. 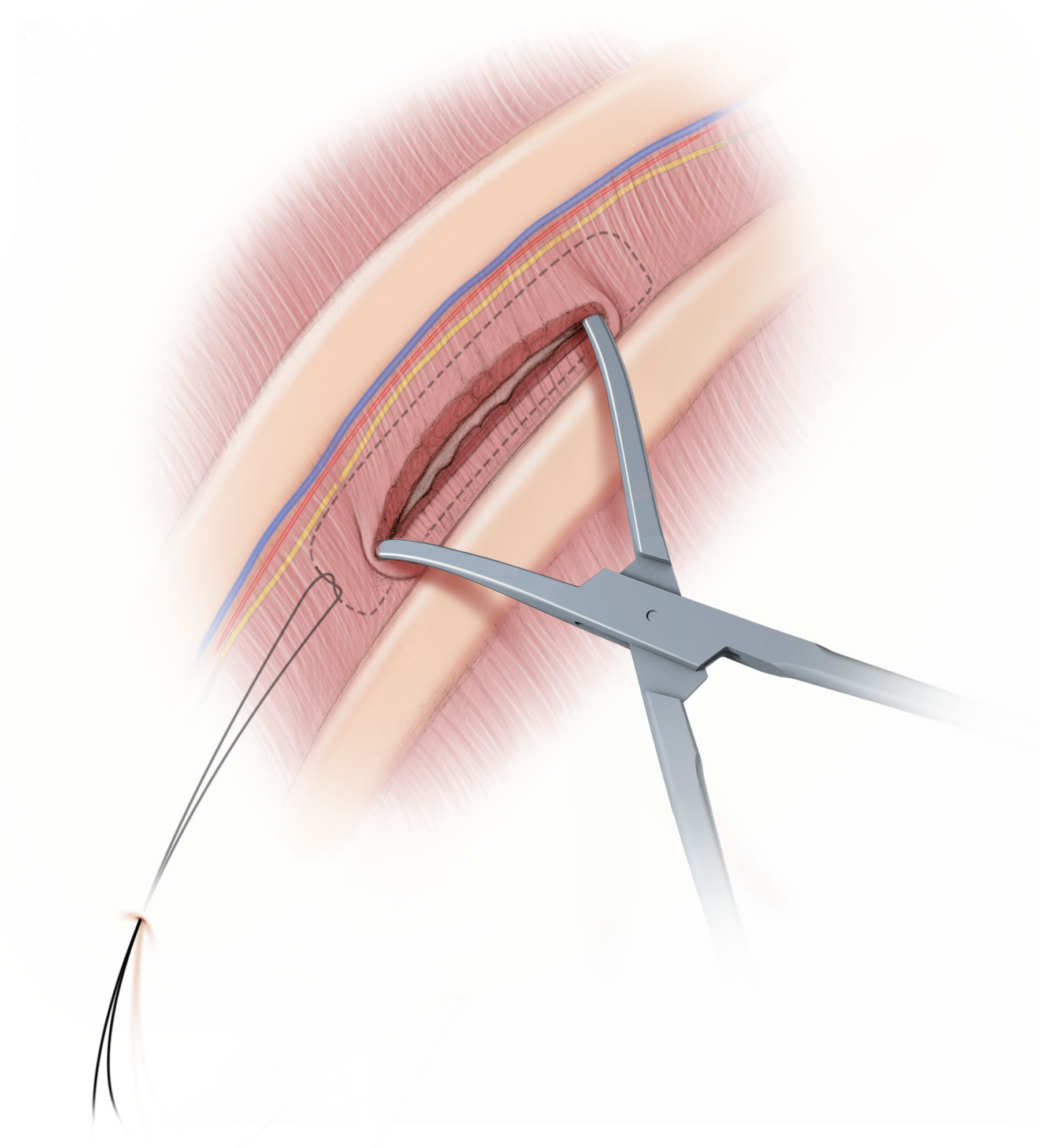 Figure 4: A “figure-8” suture is placed in the muscle at the entry site. This will be eventually tightened around the distal catheter to seal the space and prevent pneumothorax.

The anesthesia team is asked to perform a prolonged expiration to partially deflate and relax the lungs. I use a fine mosquito hemostat with controlled force to “pop” gently into the pleural space through the intercostal muscles. The resistance can be substantial at first. The surgeon must use great care to enter the space definitively without plunging an instrument into the lung parenchyma. The hemostat is spread slightly, and the distal catheter is passed immediately into the pleural space. I use a small-caliber distal catheter.

As the catheter is placed, the assistant aggressively irrigates the field. Once the distal catheter is in place, the lungs are re-expanded under irrigation, ideally until there are no further bubbles arising from the entry point. A Valsalva maneuver is performed to force out any air that might have entered the pleural space. The figure-8 suture is then tightened around the shunt catheter, pulling the muscle tissue together to seal the space and prevent pneumothorax at the next inspiration. The wound is irrigated with antibiotic fluid and closed in layers.

Multiple variations on this procedure have been described. Surgeons have employed thoracoscopy to confirm placement into the pleural spaces, and others have described using a trocar or peel-away sheath.7 Despite the variety in techniques, the concept remains the same.

The distal catheter should pass easily without resistance. Significant resistance indicates that the catheter is not in the correct plane or that the pleural space is scarred. In the case of scarring, the pleural space is unlikely to provide adequate CSF absorption, and the shunt will fail quickly. I use a C-arm to confirm that the catheter passes freely, does not coil, and travels well away from the entry site. A small pneumothorax is expected. However, a large pneumothorax with pulmonary compression should be noted and treated appropriately. 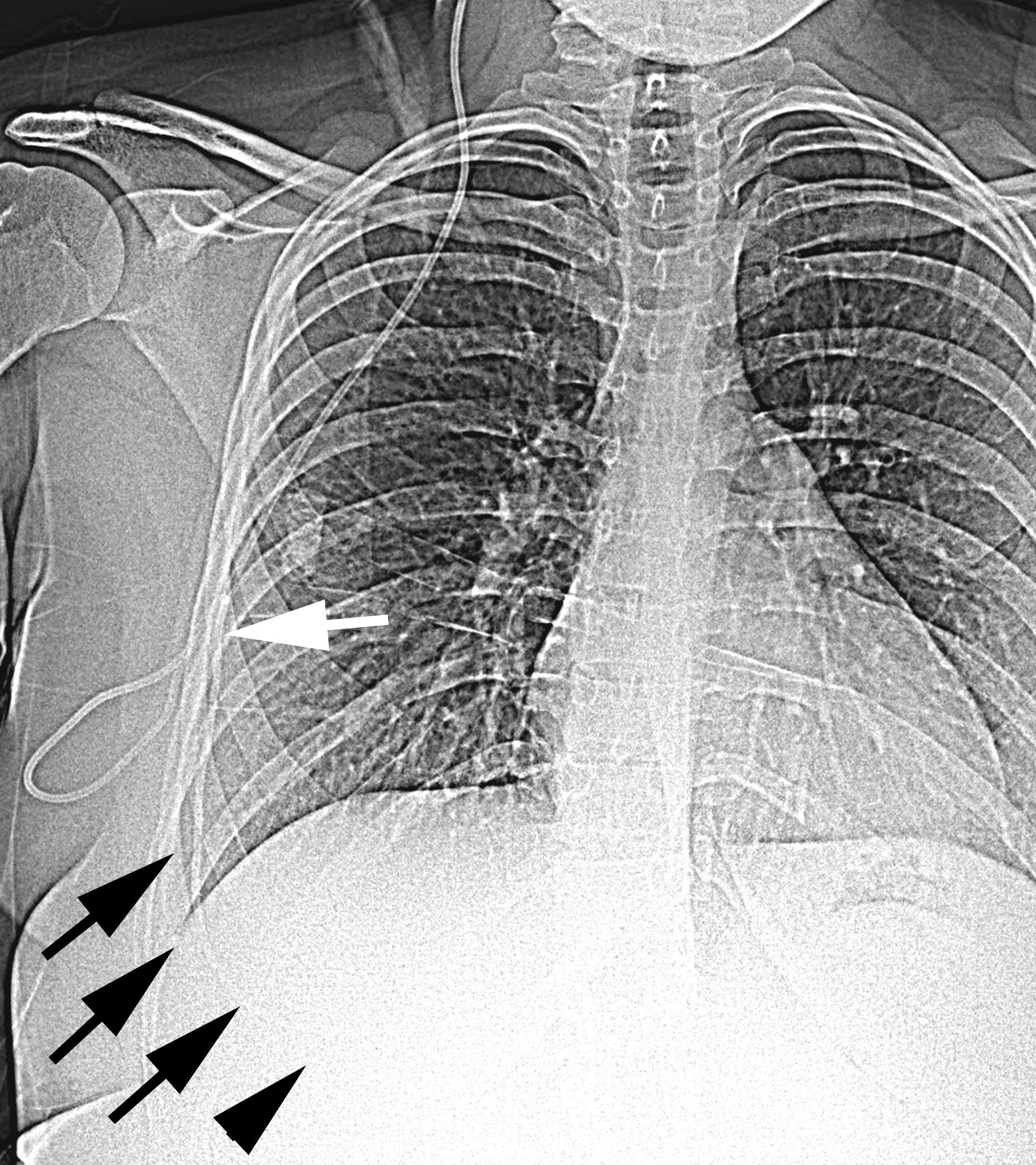 Figure 5: Plain radiograph of a patient with a VPL shunt. This posteroanterior radiograph shows the distal shunt catheter entering the pleural space (white arrow) and then travelling freely away from the entry point (outlined with black arrows). If the distal catheter coils or remains trapped near the entry point, the shunt is unlikely to function due to pleural scarring.

Portable chest radiography is performed in the recovery room to evaluate for pneumothorax. The patient is continued on antibiotics for 24 hours. Standing, posteroanterior, and lateral radiographs are obtained before discharge. The patient should be observed in a unit with experience in evaluating patients with pulmonary issues. Abnormal cardiopulmonary symptoms should be evaluated promptly and diligently.

A full cardiopulmonary examination should be performed in any follow-up visit. Family members must be taught to recognize signs of respiratory distress. Tension hydrothorax is a known life-threatening complication of VPL shunts. However, it tends to occur slowly, and patients experience a progressive (rather than sudden) decline. Patients with a VPL shunt and prolonged cough, dyspnea on exertion, chest pain, and frank shortness of breath should undergo imaging promptly. Pleuritic chest pain is relatively common with the distal catheter and can be treated with anti-inflammatory medications after pneumothorax and pulmonary effusion have been ruled out.

The pleural space is a viable distal terminus for a CSF shunt. VPL shunts have a higher failure rate than do VP shunts and are generally placed only if the peritoneum or vascular space is unsuitable. Physicians treating patients with a VPL shunt must be aware of specific possible complications from these devices.