Historically, one of the most important contributions of Harvey Cushing was defining surgery of posterior fossa tumors. Resection techniques for tumors in this region were further advanced by mandatory preoperative evaluation for selection of appropriate patients, meticulous surgical techniques, and incorporation of methods such as ventricular puncture and electrocautery. Introduction of microsurgical techniques in the 1950s ultimately revolutionized the results of posterior fossa surgery.

When compared with its counterpart supratentorial compartment, the infratentorial compartment has limited space and contains vital structures such as brainstem and cranial nerves. These factors make surgery in the posterior fossa risky, so the utmost attention to details during preoperative planning, operative execution, and postoperative care is required.

Because posterior fossa tumors often cause obstructive hydrocephalus, preoperative planning should include methods to relieve cerebrospinal fluid (CSF) pressure before the dural opening. Preoperative shunting is avoided because resection of some tumors resolves CSF obstruction and obviates the need for a permanent CSF diversion procedure.

In patients with communicating hydrocephalus, intraoperative lumbar CSF drainage affords brain relaxation. This drainage is particularly useful in situations when the location of the lesion prohibits early access to the cisterna magna and the cerebellopontine angle cisterns.

Neurophysiologic monitoring is indicated during operations for lesions near the brainstem and cranial nerves. To minimize morbidity, the fourth ventricular floor may be mapped for the facial nucleus. 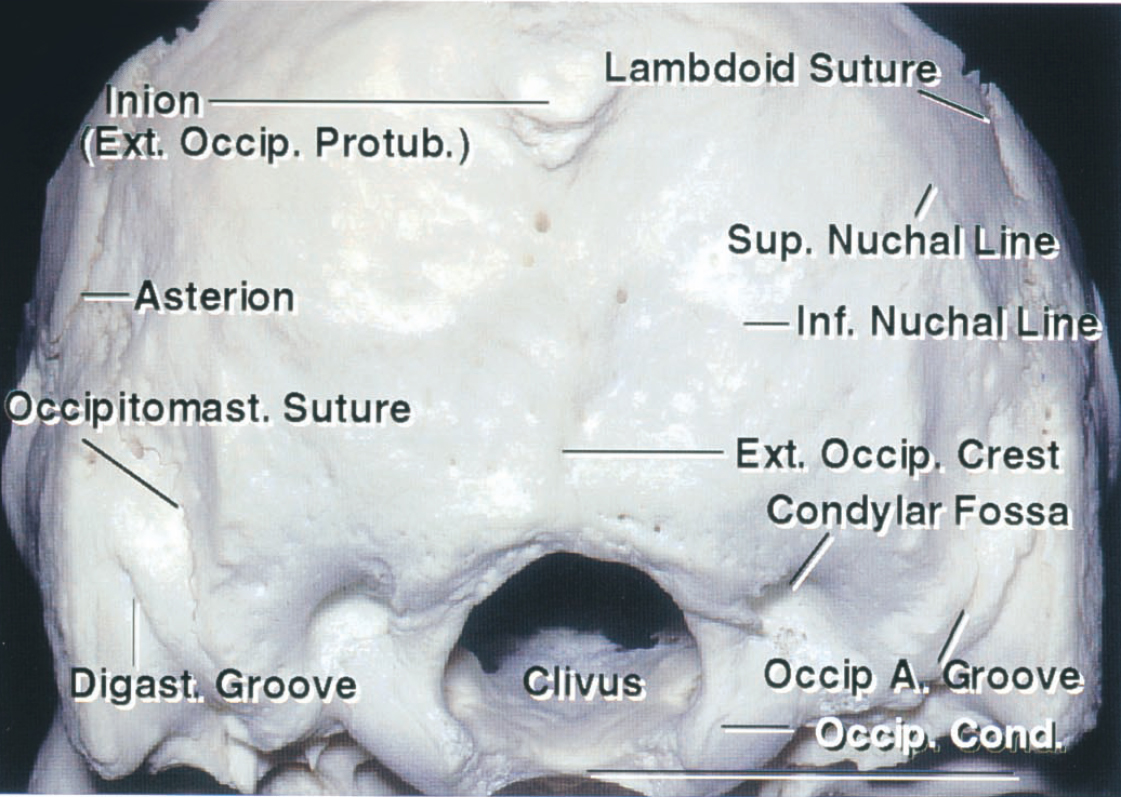 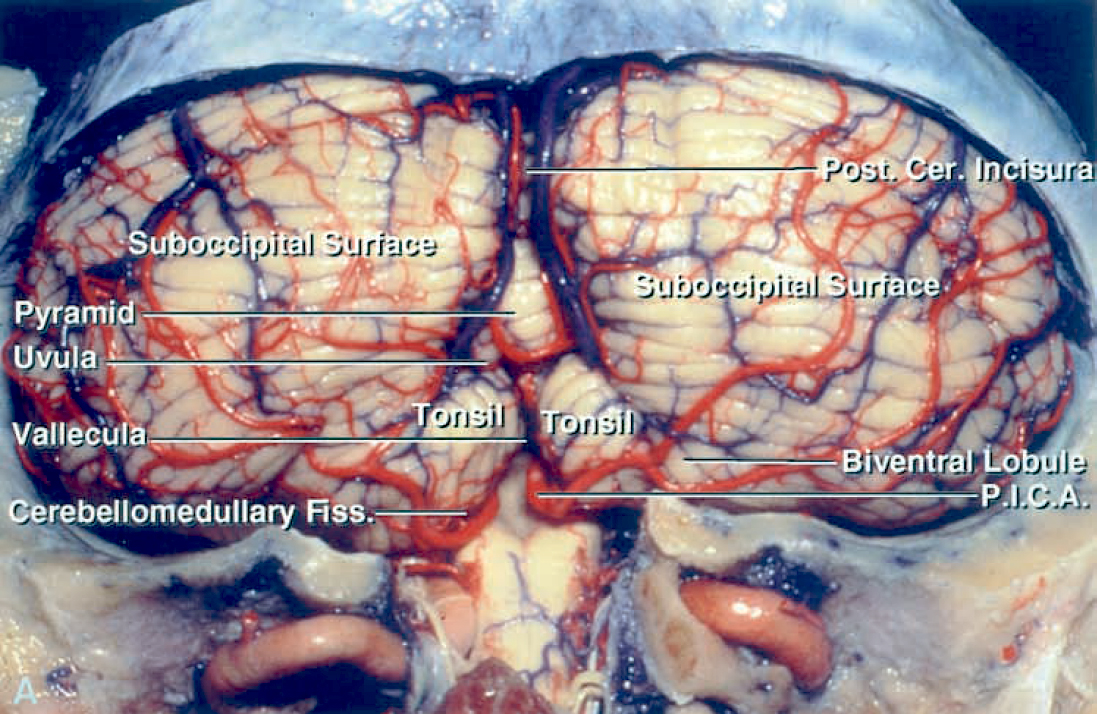 Figure 2: Removal of the suboccipital bone exposes the corresponding dural sinuses. The surface anatomy of the cerebellum is shown (Image courtesy of AL Rhoton, Jr). 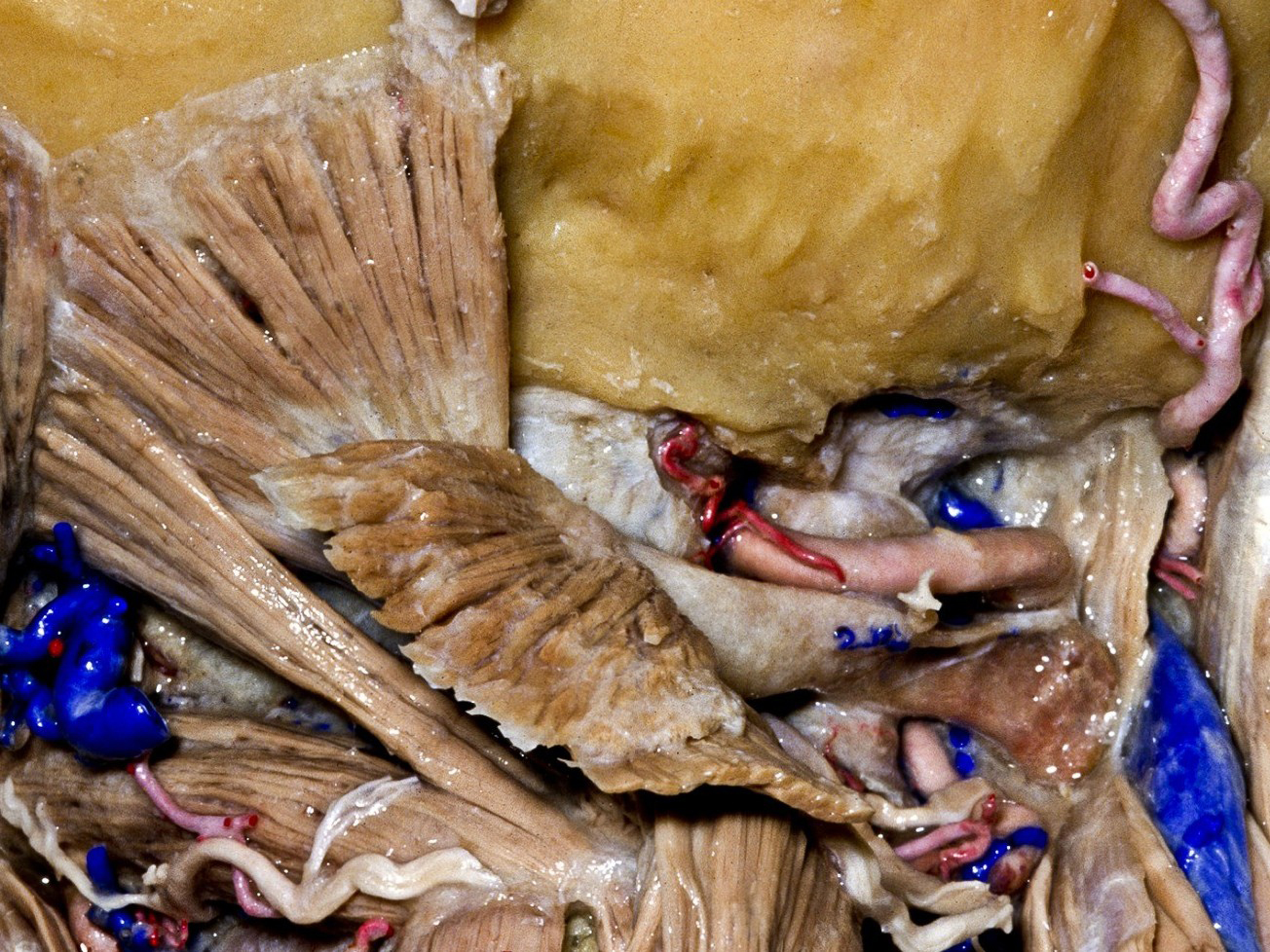 Figure 3: Note the dura is not covered by bone at the level of the craniocervical junction (between the foramen magnum and C1). The vertebral artery segment over the lateral arch of C1 (sulcus arteriosus) is also not covered by bone. The operator should exercise caution while using monopolar electrocautery at the craniocervical junction and avoid penetrating the dura or injuring the artery during muscle dissection. Careful blunt dissection in the region is advised (Image courtesy of AL Rhoton, Jr). 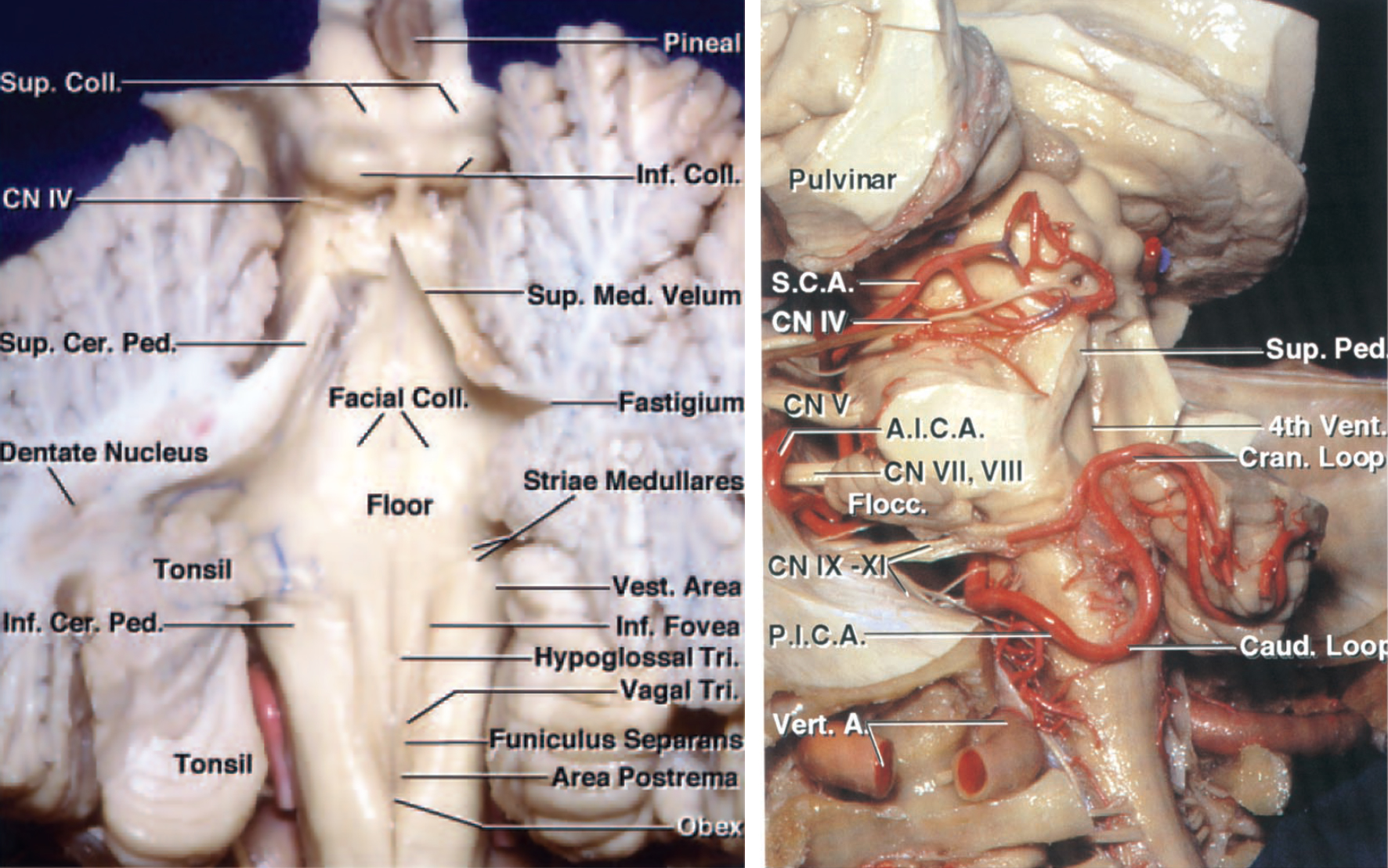 The patient may be positioned in either the prone, sitting, or park-bench position. I prefer the park-bench position because gravity will keep the field clear during surgery and I can sit during the microsurgical portion of the operation.

The sitting position allows gravity retraction to mobilize the cerebellum away from the tentorium and is advantageous for supracerebellar corridors. However, the risk of venous air embolism and the need for uncomfortable arm postures may motivate some operators to avoid this position. 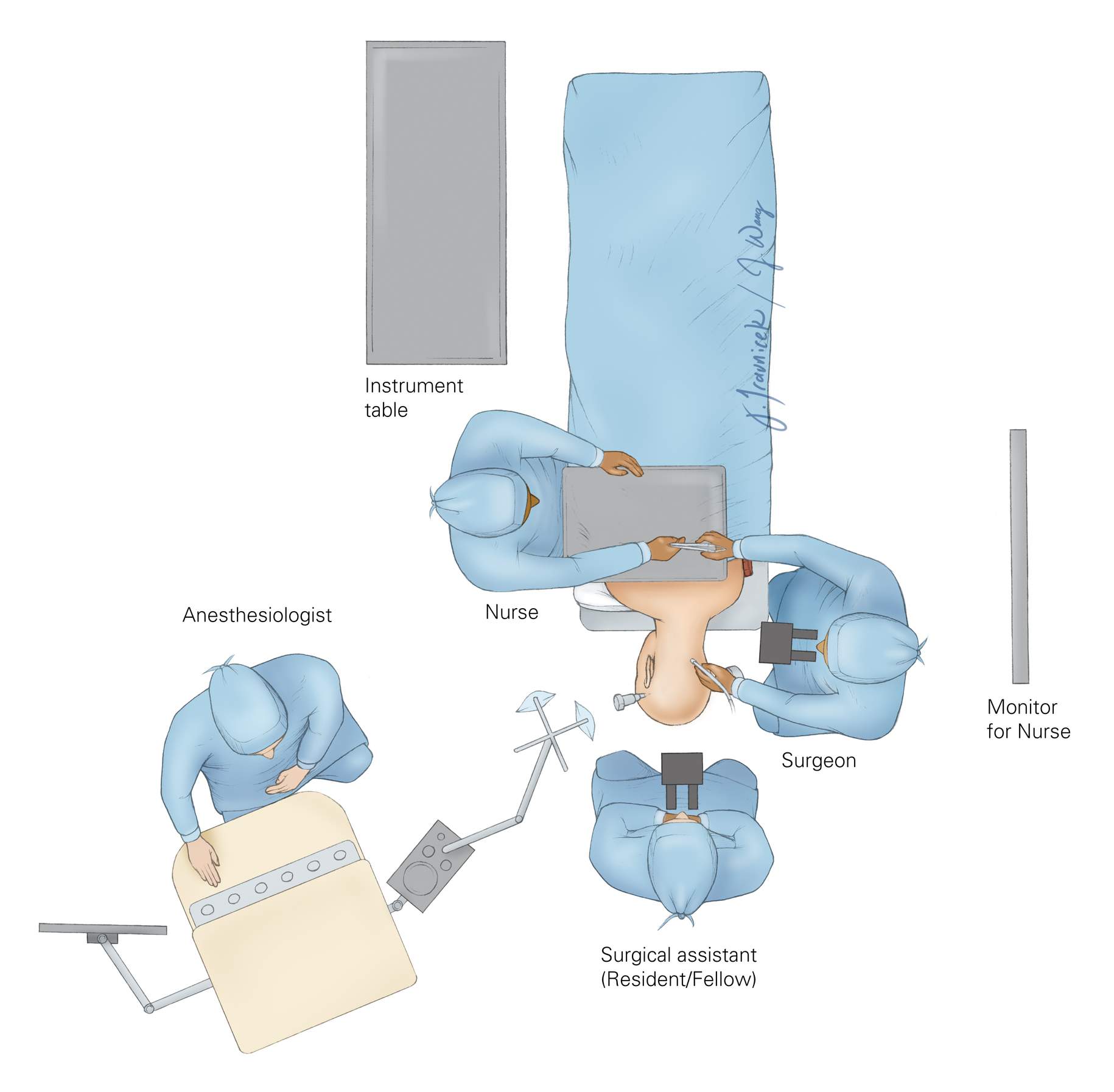 Figure 5: The operating room setup is illustrated. The patient is placed in a modified park-bench position. The assistant handling the instruments should stand across from the surgeon to transfer the instruments efficiently. The anesthesiologist may be placed at the foot of the table. This configuration provides additional room for the rest of the operating team.

Figure 6: The patient’s head is turned 45 degrees toward the floor and immobilized in a skull clamp. The incision generally extends from the inion to the C2 spinous process. Keen’s point may be prepared if an intraoperative ventriculostomy is contemplated because of hydrocephalus (Redrawn from Tew, van Loveren, Keller*). 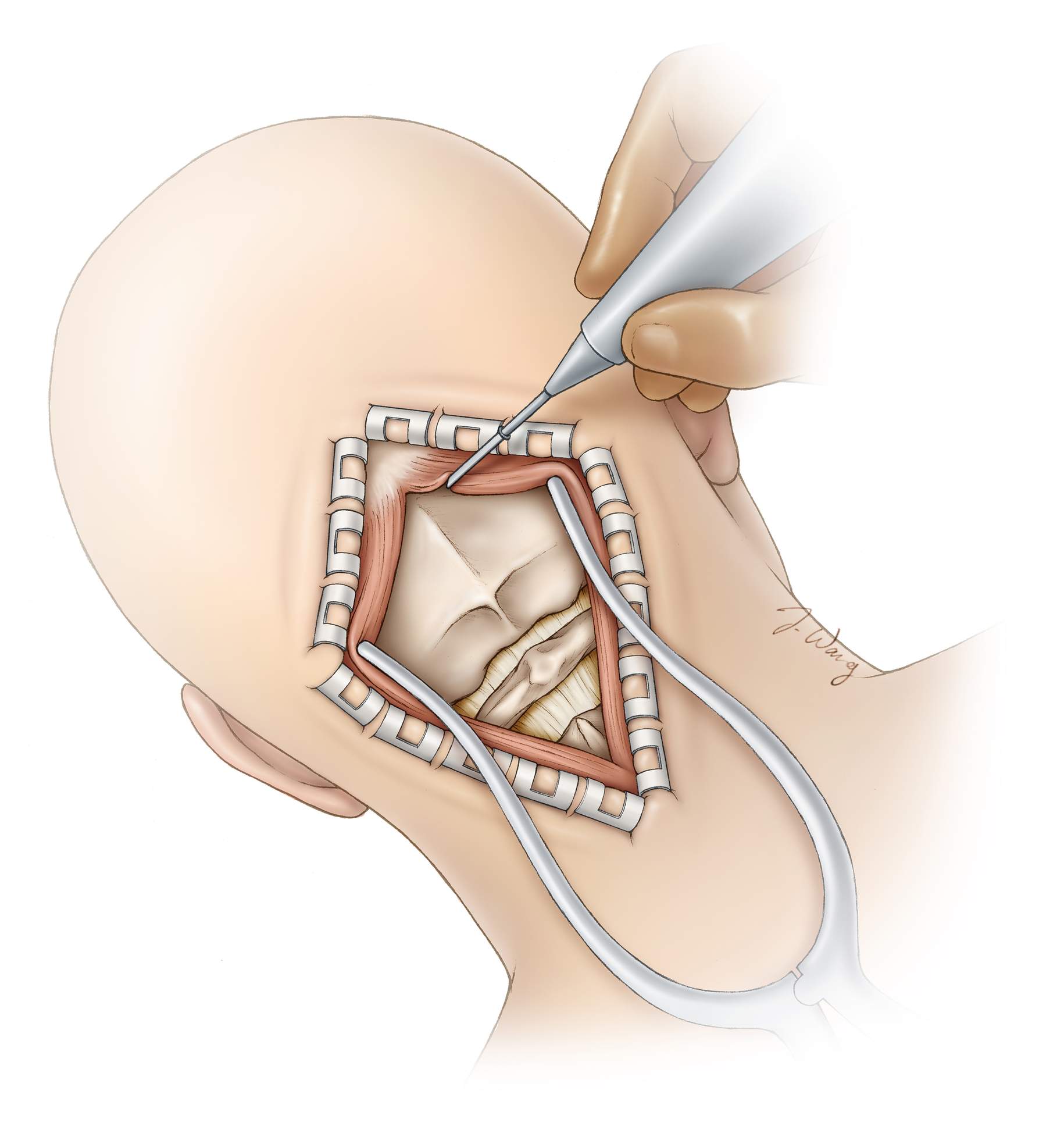 Figure 7: The incision is extended through the deep layers and to the level of the suboccipital bone along the midline avascular fascial planes. It is important to stay within the midline avascular plane to avoid postoperative neck pain. The muscle attachments to the superior nuchal line are disconnected using monopolar electrocautery, and the muscles are elevated from the underlying occipital bone in a subperiosteal fashion.

Lateral dissection over the posterior arch of C1 should be performed with caution and at lower cautery settings; blunt dissection is advised to prevent injury to the vertebral artery. This artery can have a very tortuous route outside its groove over the lateral arch of C1 (sulcus arteriosus) and may travel within the suboccipital muscles. Indiscriminate use of cautery can lead to vascular injury. Brisk bleeding from the venous plexus encasing the artery is a warning sign that the artery is nearby (Redrawn from Tew, van Loveren, Keller*). 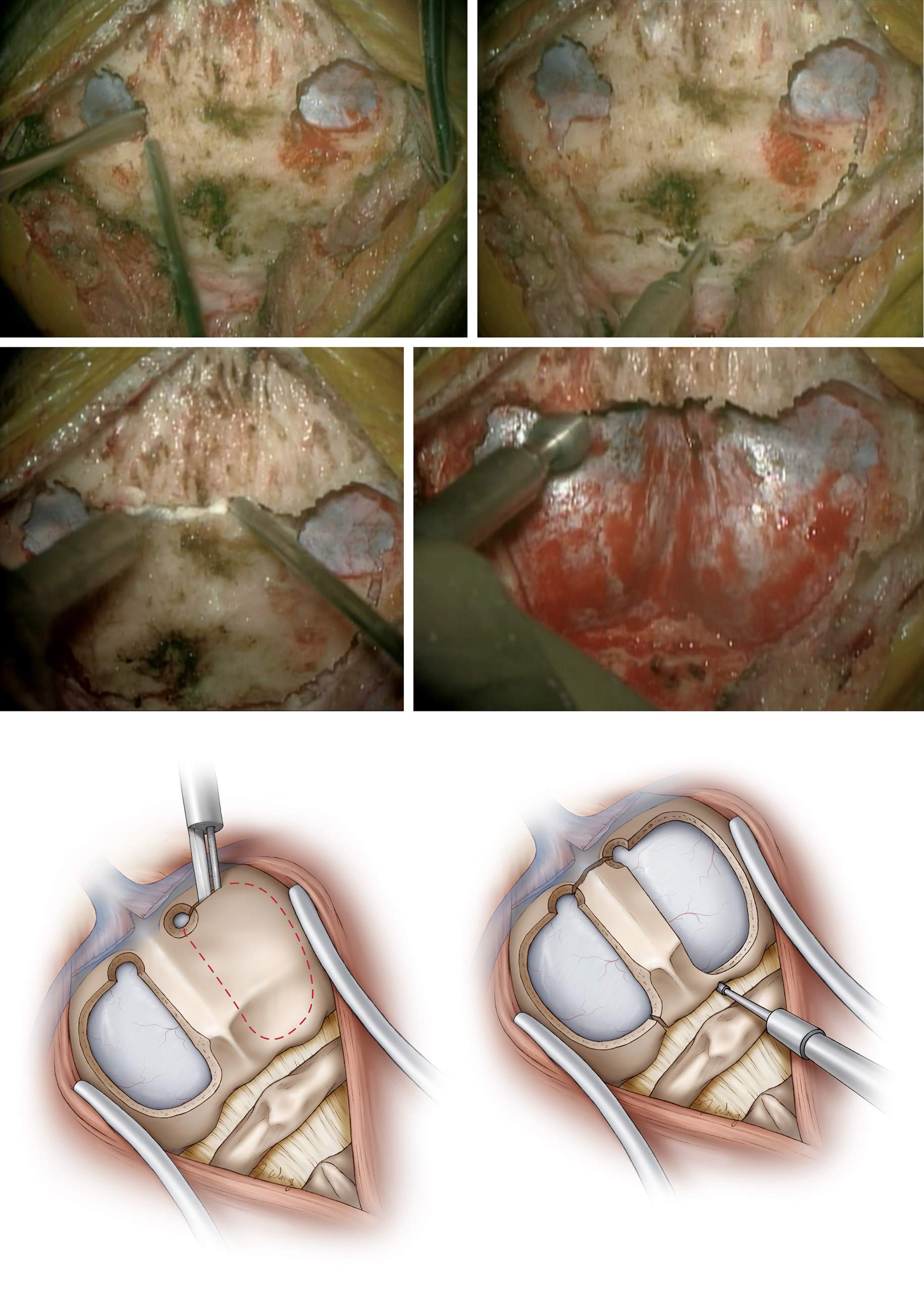 Other options include two small craniotomies on either side of the midline septum (lower left image). The remaining midline bone may then be disconnected in a second step (lower right image). Kerrison rongeurs may extend the opening laterally to the level of the occipital condyles (Redrawn from Tew, van Loveren, Keller*). 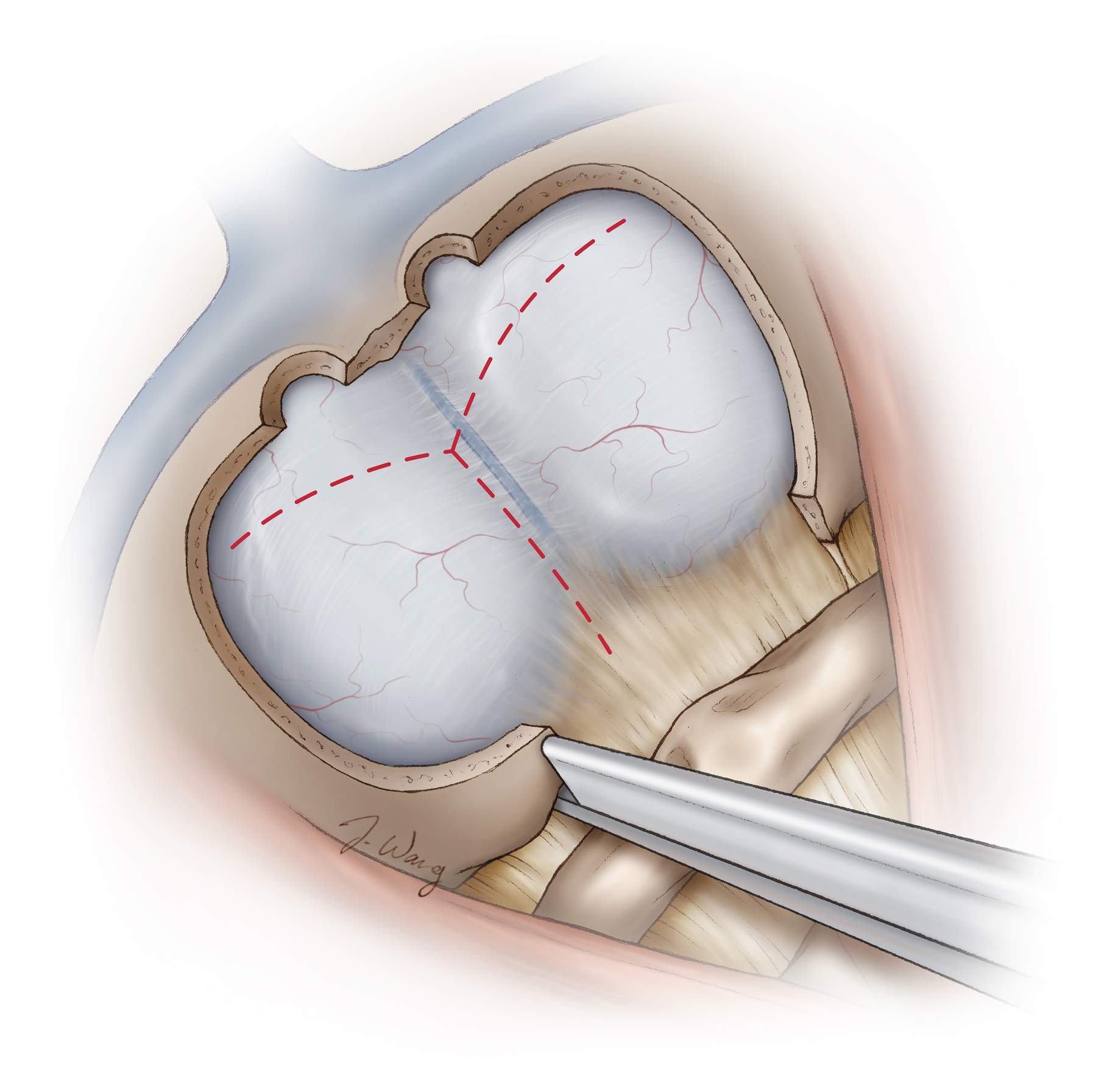 Figure 9: For lesions involving the foramen magnum and upper cervical spine, a C1 laminectomy is performed to allow for a wider dural opening and adequate lesional exposure. Generous removal of the bone along the magnum affords a more flexible inferior-to-superior trajectory to reach fourth ventricular lesions through the telovelar route.

The dura is generally opened in a Y-shaped fashion with a more inferior extension for more lateral mobilization of the dural flaps. The superior limb of the dural incision extends to the inferior aspect of the transverse sinus. For midline lesions, the dura may be opened along the midline; this maneuver facilitates watertight dural closure (Redrawn from Tew, van Loveren, Keller*). 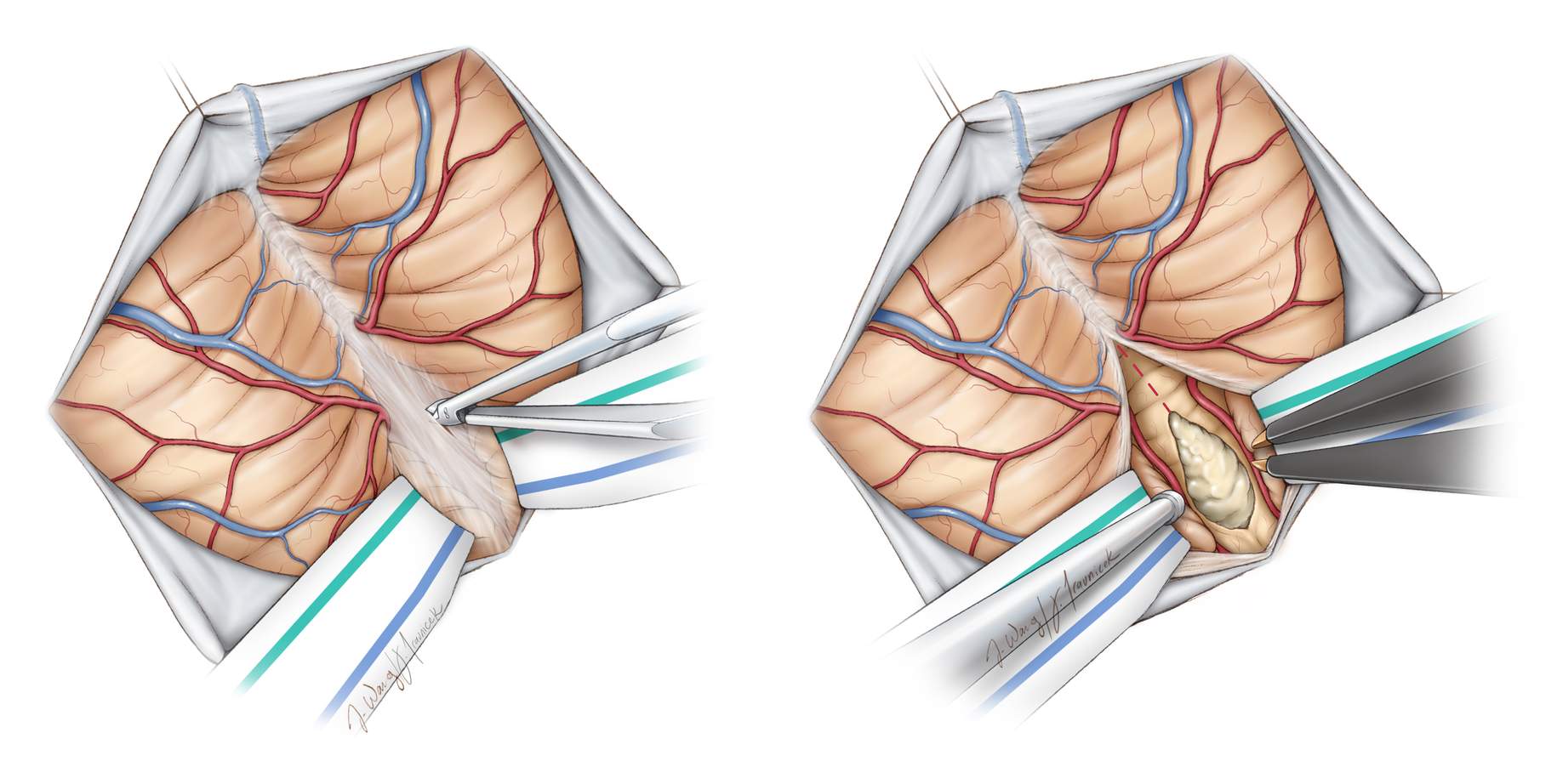 Figure 10: The arachnoid overlying the cistern magna may be opened to drain CSF and achieve brain relaxation. Depending on the pathology at hand, the arachnoid over the midline is dissected using an arachnoid knife and microscissors (left image). The transvermian or preferably the telovelar approach may be used to reach fourth ventricular lesions (right image)(Redrawn from Tew, van Loveren, Keller*).

The dura is primarily closed in a watertight fashion using 4-0 Nurolon running or interrupted sutures. I avoid dural allografts and prefer using pericranium over the occipital bone for dural grafting. A Valsalva maneuver may exclude an obvious source of CSF leakage.

If there is no cerebellar swelling, the bone may be replaced using cranial plates. I avoid placing the deep neck muscles under significant tension and minimize their “strangulation” by the deep sutures, as this maneuver will cause muscle necrosis and uncontrollable postoperative pain. The neck muscles are gently approximated. However, the fascia is closed in a watertight fashion.

The patient is observed in the intensive care unit for a day or two and then transferred to the ward. Steroids are administered prophylactically to minimize the risk of aseptic meningitis. If preoperative hydrocephalus was present and a ventricular catheter was implanted intraoperatively, this catheter should be left in place during surgery and “weaned off” postoperatively.

Aggressive retraction of the cerebellum can lead to retraction edema shown on postoperative imaging that can ultimately cause symptomatic posterior fossa tension and a need for decompression. Therefore, caution should be exercised during dural closure and bone flap replacement. If the brain appears swollen, the dural closure should not cause more tension and the bone flap should not be replaced. This brain swelling is compounded by potential partial transverse sinus thrombosis and vermian veins sacrifice.