Introduction and Review of Imaging Modalities

Open Table of Contents: Introduction and Review of Imaging Modalities
Login to Bookmark

IMAGING OF THE NEURAL AXIS

In this chapter, we review the fundamentals of neuroimaging techniques. Individual disease processes, both the operable and several inoperable, are reviewed in the dedicated neuroradiology chapters.

When evaluating a lesion with any imaging modality, it is important to remember the clinical picture from which the image was derived. The acuity and focal nature of presenting symptoms will often help to differentiate between lesions that appear highly similar on diagnostic imaging studies. The patients’ age should be taken into account as well, as doing so is crucial in narrowing the differential diagnosis. Most patients are referred to a neurosurgeon after their MRI or CT scan. Imaging studies older than 3 months should be repeated because lesional change during this time period may affect the presumptive diagnosis and therefore the operative planning.

These groups are not mutually exclusive, as certain tumors and various space-occupying pathologies may fall into either category. 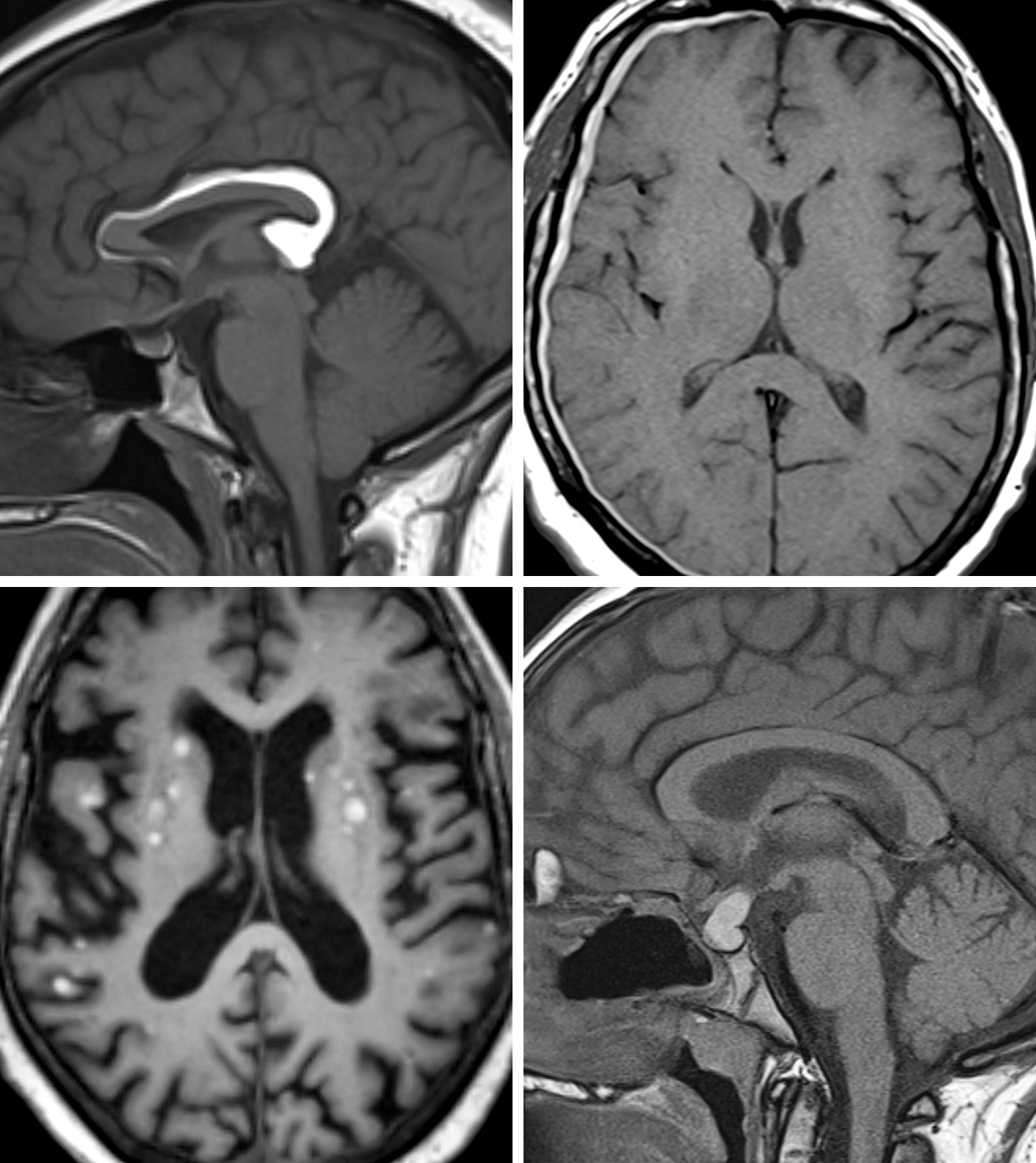 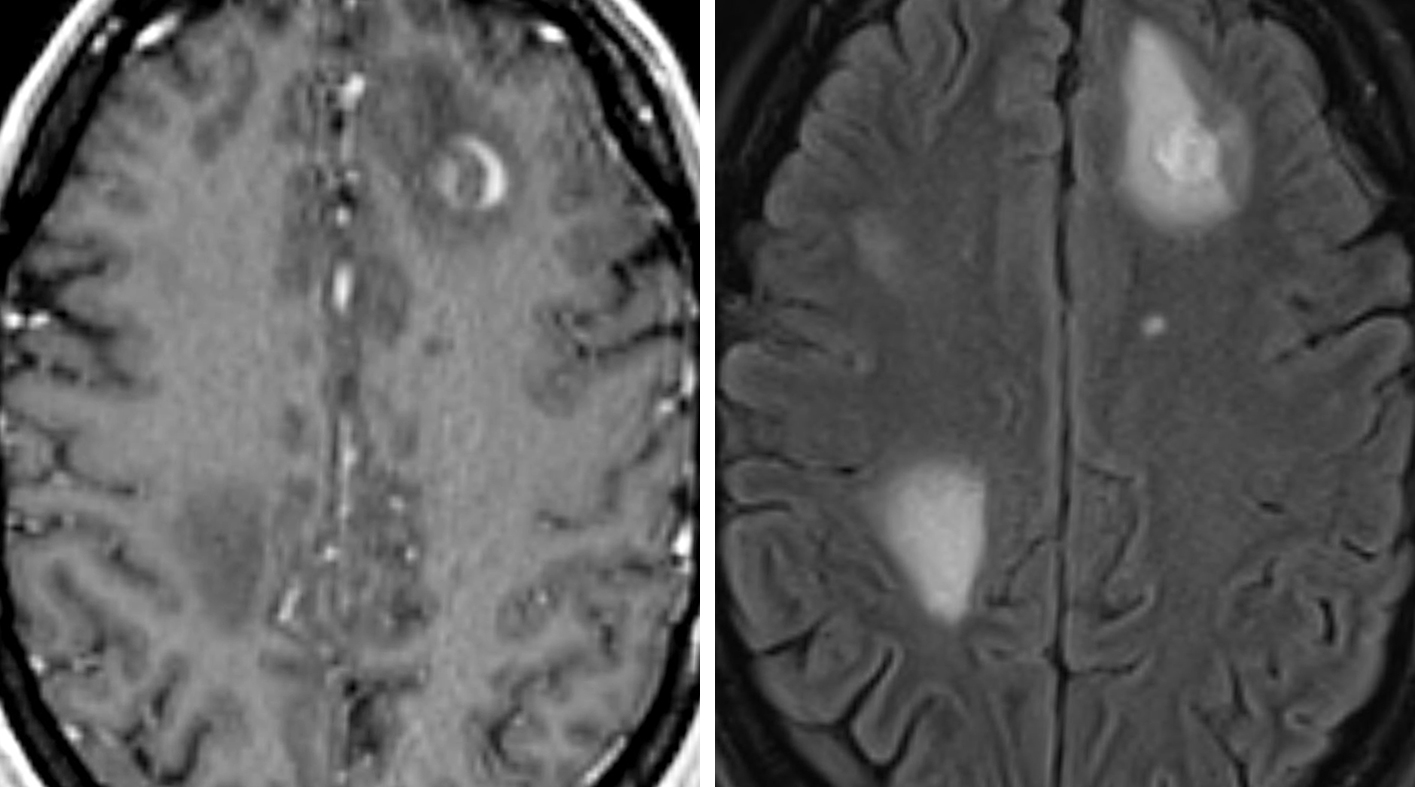 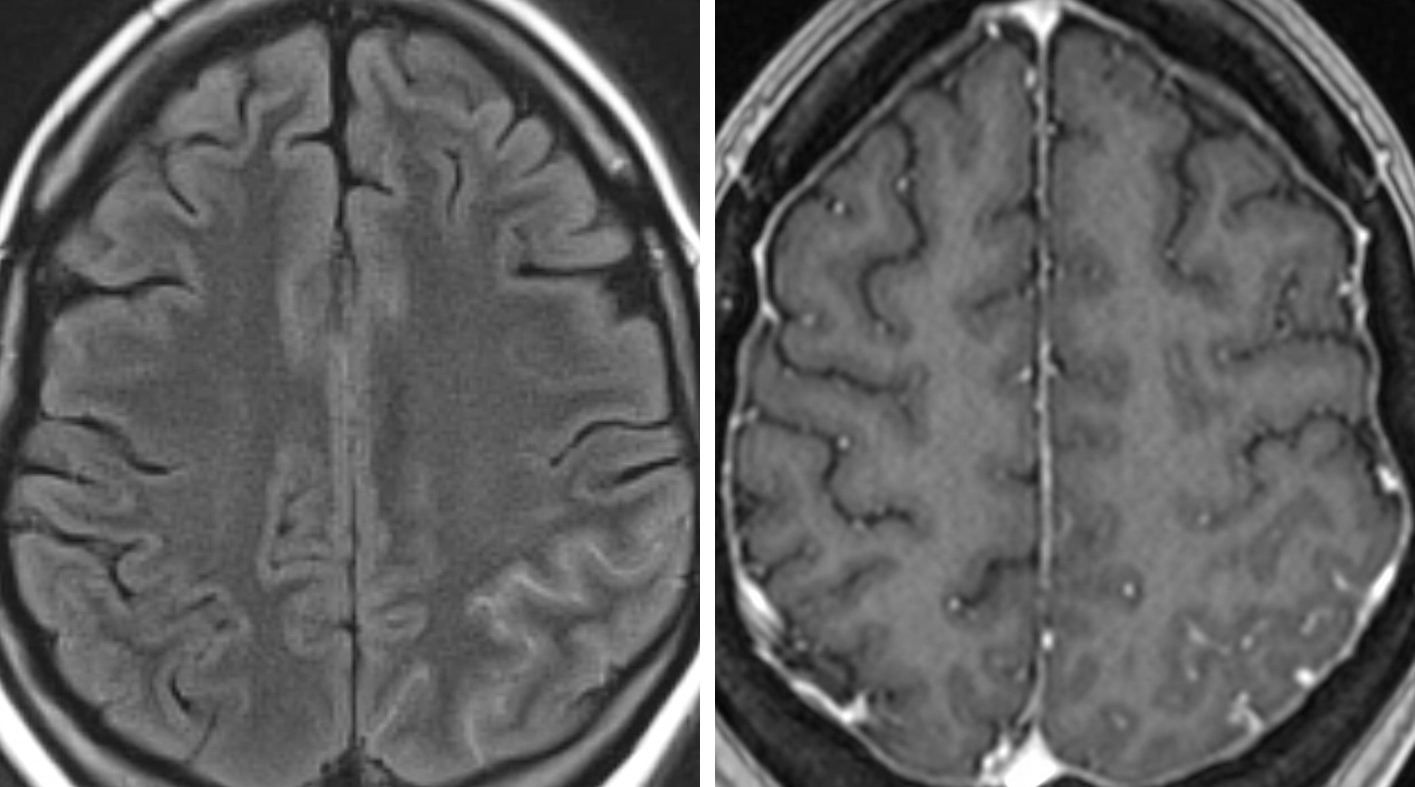 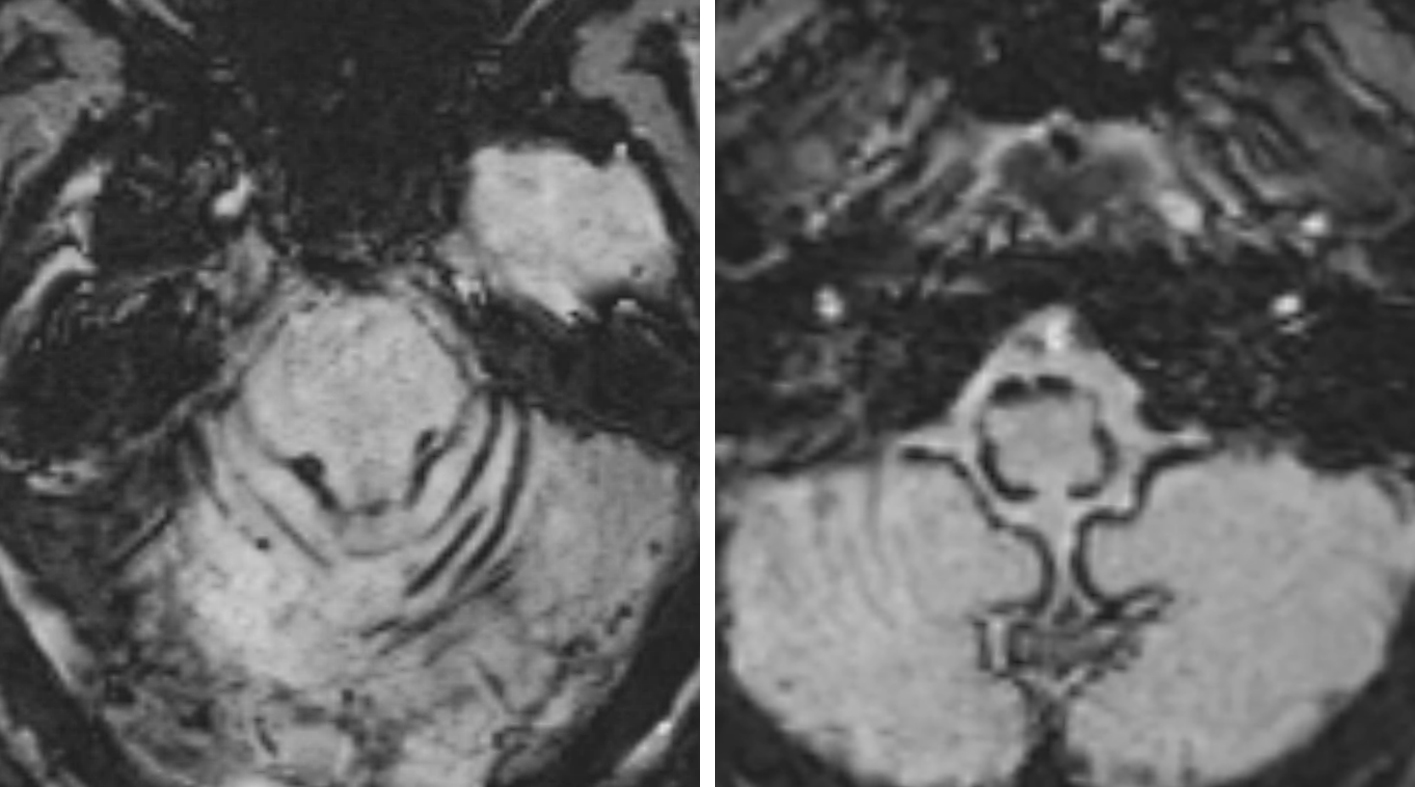 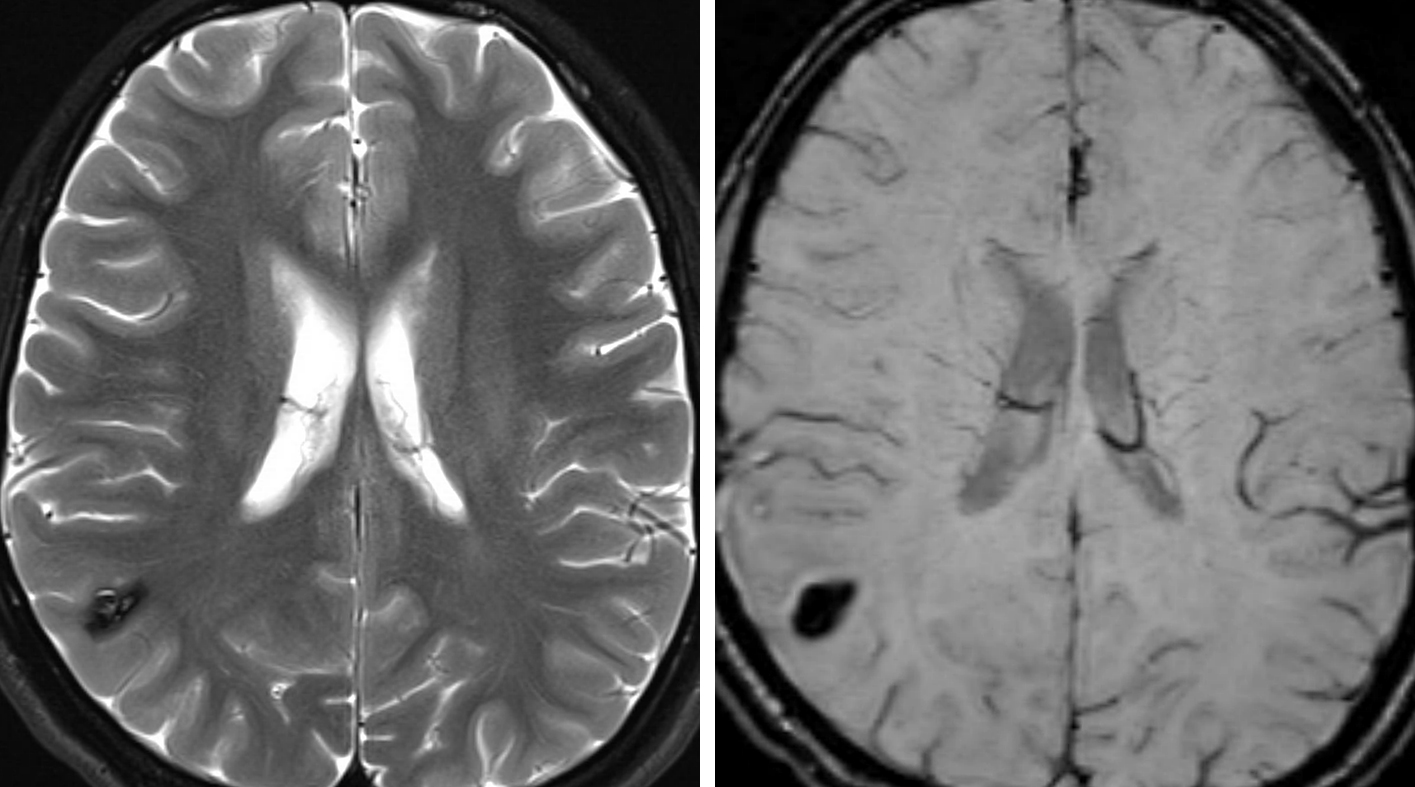 Figure 5: T2-weighted images (left) demonstrate a heterogenous lesion with “popcorn-like” appearance in the right cerebral hemisphere with associated susceptibility artifact (right). Given the lack of surrounding edema that would otherwise suggest an acutely hemorrhagic lesion, this abnormality is most compatible with a cavernous malformation. 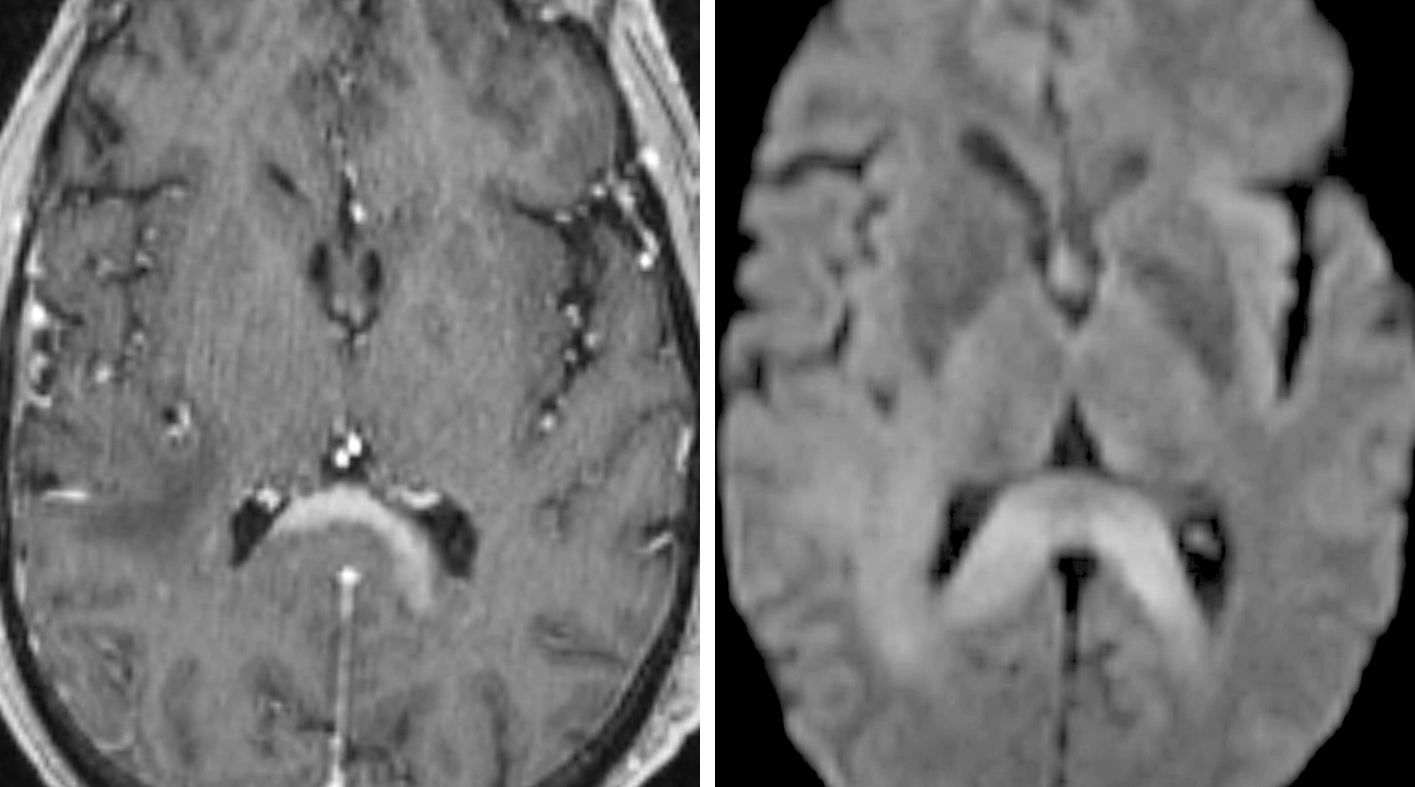 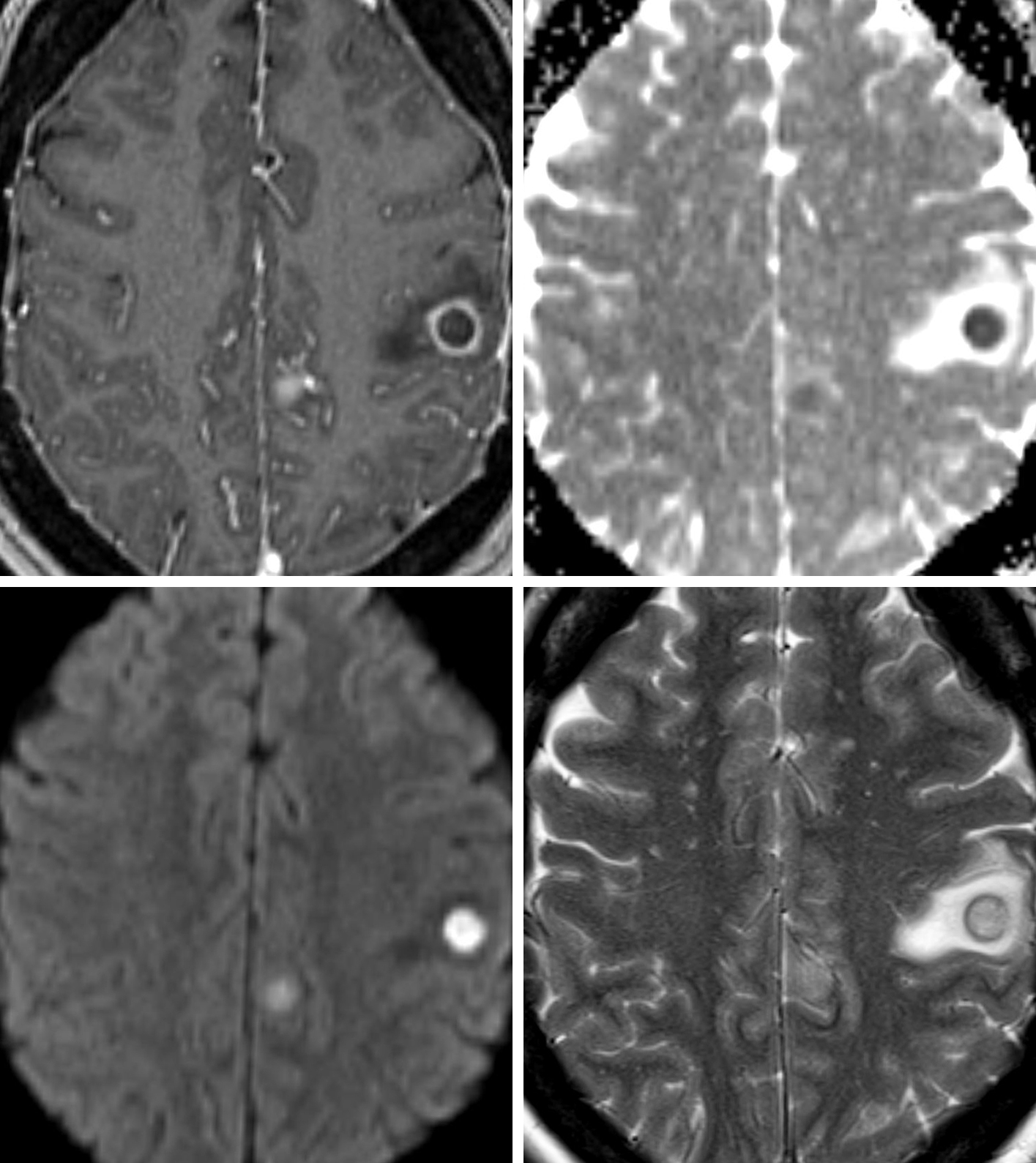 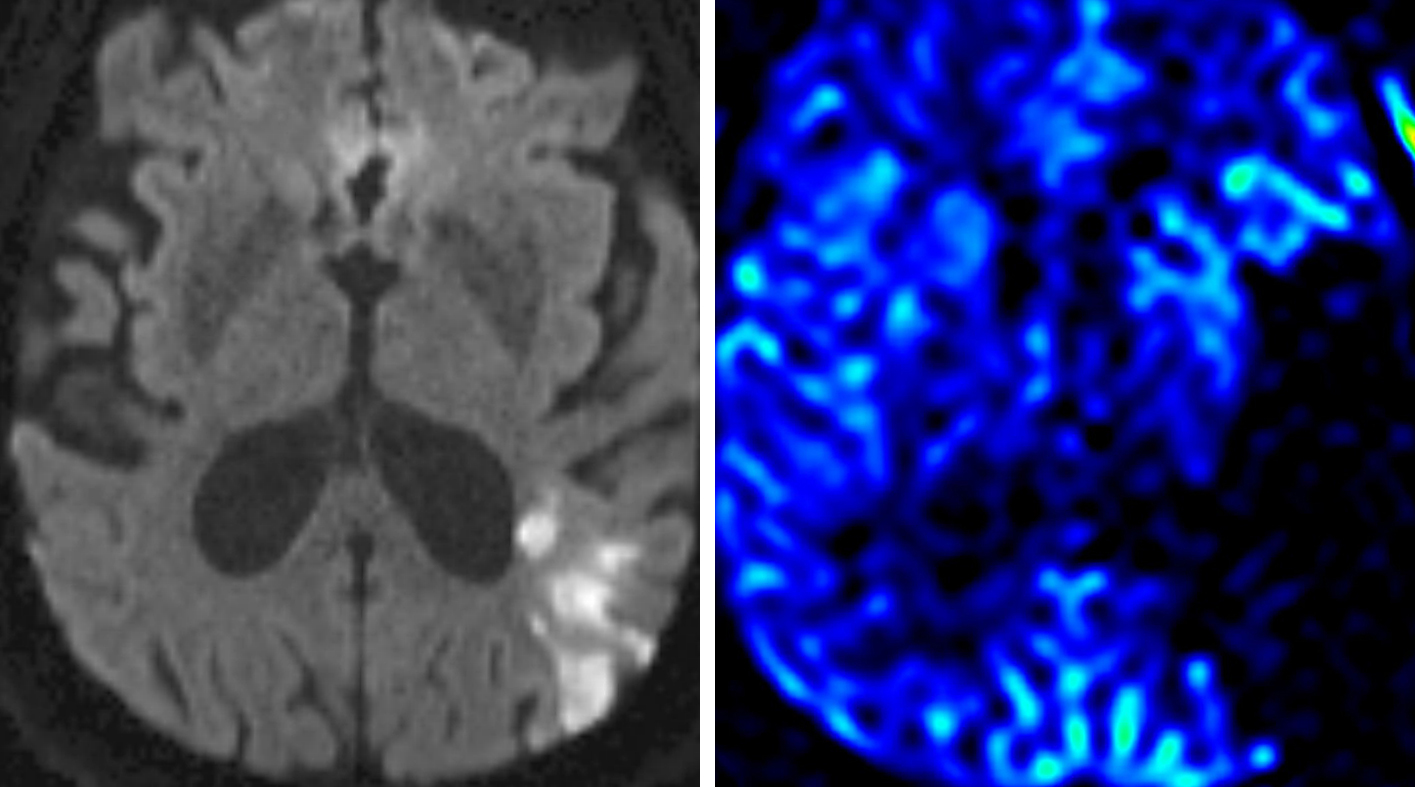 Figure 8: (Left) DWI image demonstrates a wedge-shaped region of restriction diffusion compatible with cytotoxic edema; this represents the infarct core in this patient with acute stroke. (Right) rCBV MR perfusion images demonstrate a much larger area of hypoperfusion; this region outside of the infarct core represents critically hypoperfused or at-risk tissue. 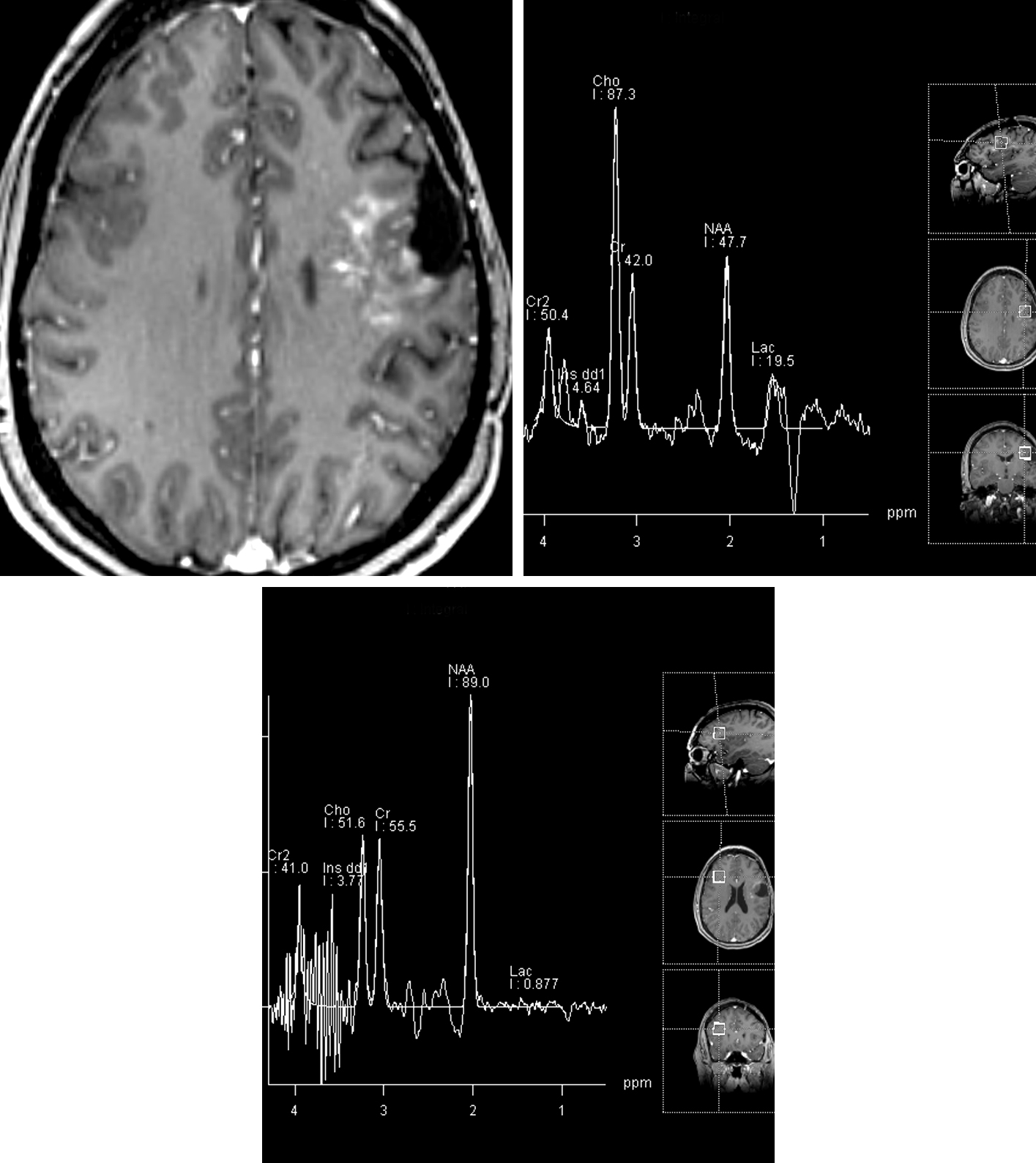 Figure 10: (Top Left) T1-weighted postcontrast images demonstrate enhancement along the medial aspect of the resection cavity in this patient with previously resected oligoastrocytoma (WHO grade II) who is status post radiation. Given concern for radiation necrosis, MR spectroscopy was performed. (Top Right) Note the elevated choline/creatinine and depressed NAA; these findings are compatible with tumor progression. (Bottom) Normal spectroscopic data are also provided. 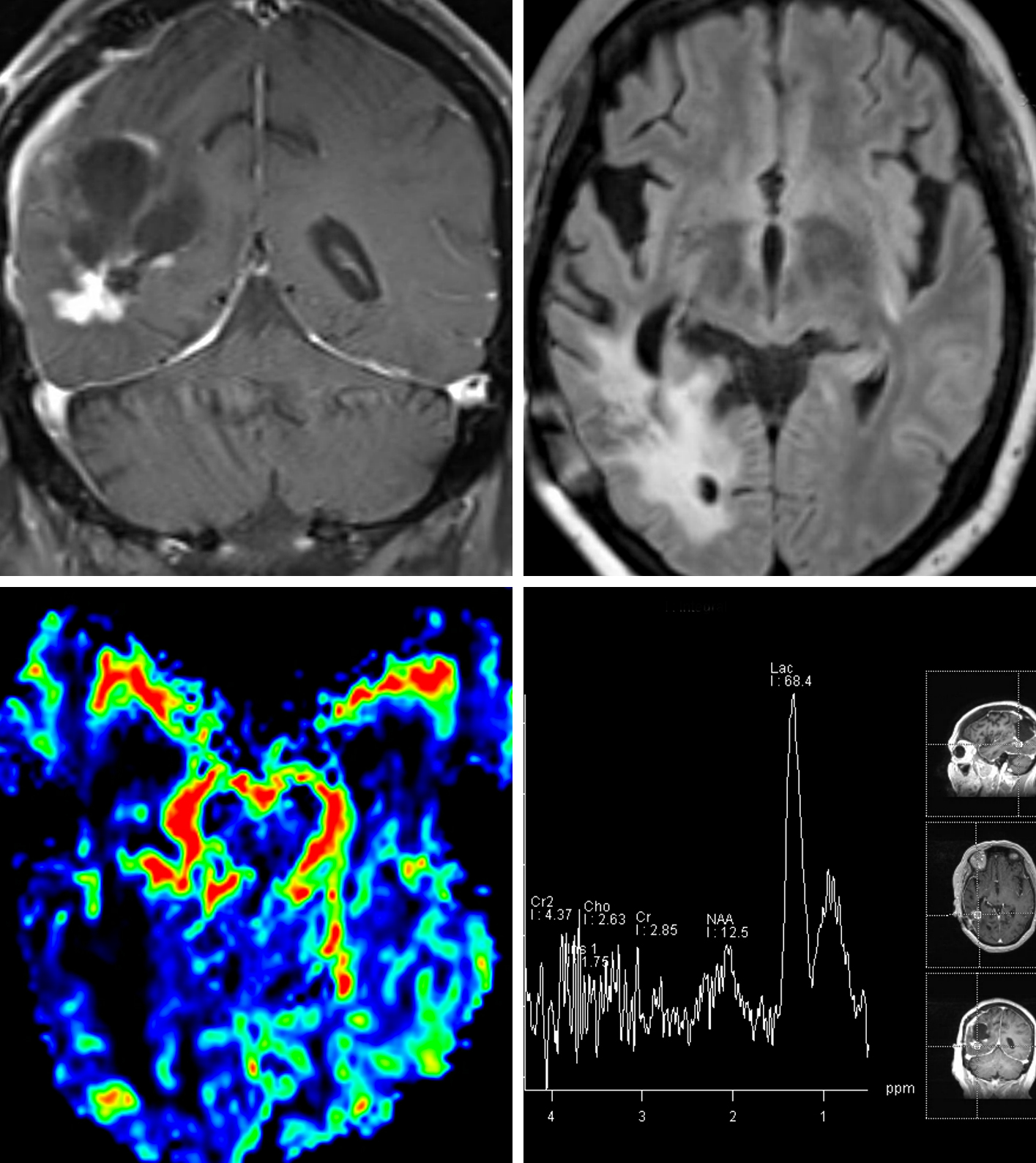 Figure 11: Coronal T1-weighted postcontrast fat-sat image (top left) demonstrates an enhancing nodule with surrounding FLAIR hyperintensity (top right) along the inferior aspect of the resection cavity in the right parietal lobe in this patient who is status post surgical resection and radiation for glioblastoma. (Bottom Left) No overt hyperperfusion is seen on rCBV perfusion images. (Bottom Right) Spectroscopy of the lesion demonstrates significant elevation of lactate with depression of other metabolites. The spectroscopic findings and lack of hyperperfusion favor radiation necrosis.

A CT scan of the head without intravenous contrast (“plain CT”) is typically the first imaging modality I order when I suspect intracranial pathology. CT is preferred in these situations due to its relative speed and inexpensiveness when compared to other forms of neuroimaging. It is therefore imperative to quickly identify common pathologies on CT imaging and begin preparing for further targeted diagnostic or therapeutic measures, if necessary. These critical pathologies include hydrocephalus, foreign bodies, epidural/subdural hematoma, subarachnoid hemorrhage, intraparenchymal hemorrhage, and skull fractures.

CT imaging relies on the varying electron densities of different tissues and body fluids, which results in varying attenuation of the x-ray beam. When CT scans are discussed, correct terminology is essential: bright objects are “hyperdense” or “hyperattenuated,” while dark objects are “hypodense” or “hypoattenuated.” Common intracranial pathologies that may present as hyperdensities or hypodensities are provided below:

Many types of intracranial pathology, including most tumors, are poorly characterized on a noncontrast CT; further imaging studies, such as MRI, are warranted.

Fractures of the skull and acute hematomas are best viewed on a noncontrast CT scan, as bones and acute blood are easily visualized due to their relative hyperdensity. CT imaging of the head with contrast is not routinely ordered except in cases where a patient is unable to undergo an MRI, such as the patient having a previously implanted metal device. In these situations, CT with contrast can replace contrast-enhanced MRI, although the resolution of the image will be much lower.

CT angiography (Figure 12) is the study of choice for initial evaluation of spontaneous intracranial hemorrhage. Vascular lesions that are embedded in a clot may not be easily distinguished. Increased intracranial pressure may complicate adequate vascular perfusion and adequate imaging.

Small aneurysms may be overlooked, and bony artifact from the skull base may interfere with visualization of vascular lesions at the skull base, particularly within the posterior fossa. CT perfusion can be used to evaluate vasospasm and hypoperfusion. 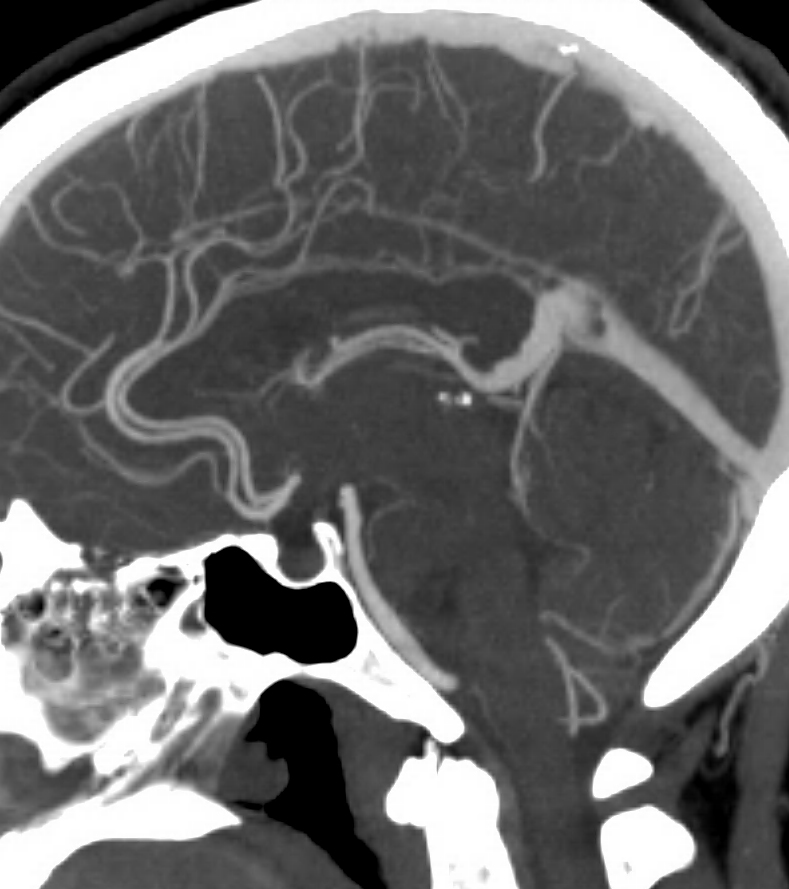 MRI is the gold standard for evaluating intraparenchymal lesions. Different MR sequences allow for the study of various lesions that own their particular appearance on the different sequences. In addition to location, shape, structural involvement, size, and multiplicity, it is the lesional characteristic components (eg, calcifications, cysts, fat, and the presence or absence of contrast enhancement) that allow for MR to distinguish them from one another. Thus, a foundational understanding of MR and its various sequences is key for us to correctly delineate pathology on an MR scan.

Table 3 displays the signal intensity of T1- and T2-weighted images for common components of neurological lesions. Note that fat may have high signal intensity on T1 or T2 if it is not properly attenuated. Similar to CT, MR has its own terminology for referring to bright and dark objects. Bright objects are considered hyperintense while dark objects are considered hypointense. For the purposes of this chapter, the simple terminology of bright and dark will be used when describing image characteristics.

As mentioned, MRI is one of the most useful imaging modalities for identifying and localizing intraparenchymal lesions. However, correctly narrowing the differential diagnosis of a lesion prior to biopsy is a complicated yet imperative process. When we view intra-axial lesions on MR scans, our first steps will be to identify the location of the lesion, identify the presence or absence and patterns of contrast enhancement, determine whether the pathology is diffuse or focal, and determine if the lesion is causing mass effect or if it crosses the midline.

Lesions that frequently cause mass effect include metastases, abscesses, and hemorrhages. Conversely, primary brain tumors are less likely to cause mass effect—a direct result of the infiltrative nature of a primary brain tumor—as are white matter lesions, including multiple sclerosis and progressive multifocal leukoencephalopathy. Masses that cross the midline include glioblastoma multiforme, lymphoma, meningioma, and tumefactive demyelination.

Consultation with a neuroradiologist is invaluable for extracting the information available and for identifying the need for future studies. Certain lesions can cause diagnostic confusion. For example, epidermoid cysts can mimic arachnoid cysts; their hyperintensity on diffusion sequences is pathognomonic. Often, intra-axial lesions will be difficult or impossible to differentiate based solely on MRI.

Tumefactive demyelinating plaques can resemble high-grade gliomas, and their periventricular location in the absence of significant mass effect in a young patient should prompt an evaluation for multiple sclerosis by our neurology colleagues. As well, an organizing hematoma, a radiation-induced necrotic lesion, and a brain abscess can all mimic a glioblastoma.

Cerebrovascular disease, including slowly progressing stroke or acute ischemic stroke, may emulate a glioma. Similarly, an irregularly enhancing subacute infarction may look similar to a high-grade glioma. Our clinical suspicion is paramount to avoid unnecessary interventions.

One of the most powerful advantages of MR angiography (Figure 13) is that it grants us the ability to perform cross sectional angiography without IV contrast material. Using this modality, we can quite effectively assess patients with renal failure and concomitant suspected vascular disease. Its quality is less dependent on the operator’s ability than is vascular Doppler, though MR angiography is a more expensive modality than other noninvasive imaging techniques.

MR angiography is useful for aneurysm screening (87% sensitive and 92% specific) as well as for screening high-risk patients, including those with first-degree relatives with intracranial aneurysms and risk factors of hypertension and smoking. This modality provides us an excellent option to evaluate carotid stenosis in patients who want to avoid invasive procedures such as arteriography.

I frequently use contrast-enhanced MR angiography for the follow-up assessment of coiled aneurysms. I follow up on suspicious findings with 4-vessel catheter arteriography. Pathologies that are bright on T1, such as dissection flaps or thrombosis, may also appear bright on MR angiography and mimic normal arterial flow. 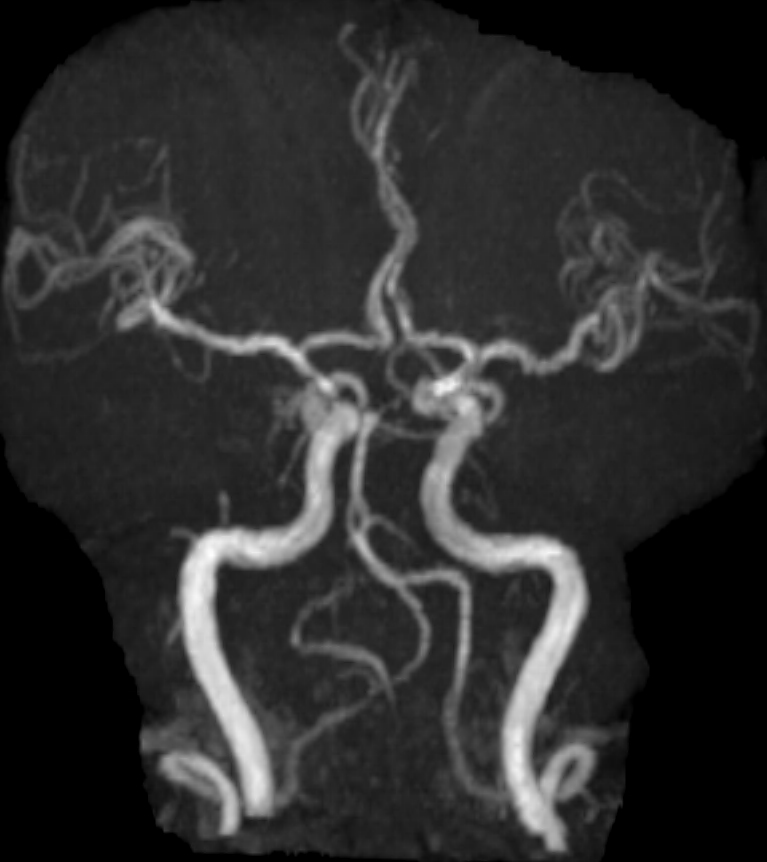 MR spectroscopy (MRS) is useful in differentiating many pathological processes but currently does not replace a definitive biopsy for final diagnosis in all cases. Specifically, MRS can help to differentiate abscess versus neoplasm, postoperative enhancement versus recurrent tumor (Figure 10), multiple sclerosis plaques versus tumor, and progressive multifocal leukoencephalopathy versus toxoplasmosis versus lymphoma in patients with AIDS.

Important peaks on proton MRS are observed in lipids, lactate, N-acetyl aspartate (NAA), creatine (Cr), and choline (Cho). Lactate is not present in normal brain and is a marker of anaerobic metabolism. Lactate is present in ischemia, infection, tumor necrosis, radiation necrosis (Figure 11), and demyelinating disease.

The fMRI is usually performed preoperatively to help plan the resection of gliomas that are in the vicinity of the language and sensorimotor cortices (Figure 9). This modality offers a functional assessment of cortical activity via stimuli-induced alterations in blood flow, providing us utility in both the clinical and research settings. The stimuli used to elicit cortical activity can involve multiple tasks that call on speech, visual, motor, and memory paradigms.

AVMs in the vicinity of functional cortices affect regional blood flow and render the results of fMRI unreliable.

This method of imaging is most useful when removing a mass or glioma that potentially impinges on or lies near an important white matter tract (Figure 9). The clinical utility of this procedure will continue to increase as DTI research improves in its ability to resolve smaller and smaller bundles of white matter tracts with reduced computational time associated with image generation.

Catheter angiography (Figure 14) remains the gold standard study to evaluate flow and angioarchitecture of arteriovenous malformations (AVMs) and aneurysms. It is a more invasive procedure than CT angiography or MR angiography but provides important information. It also allows for treatment during imaging.

Almost all patients with AVMs and some patients with complex aneurysms undergo arteriography. Although a CT angiogram can detect aneurysms, the 3D reconstruction images of the arteriogram are highly valuable for operative planning. 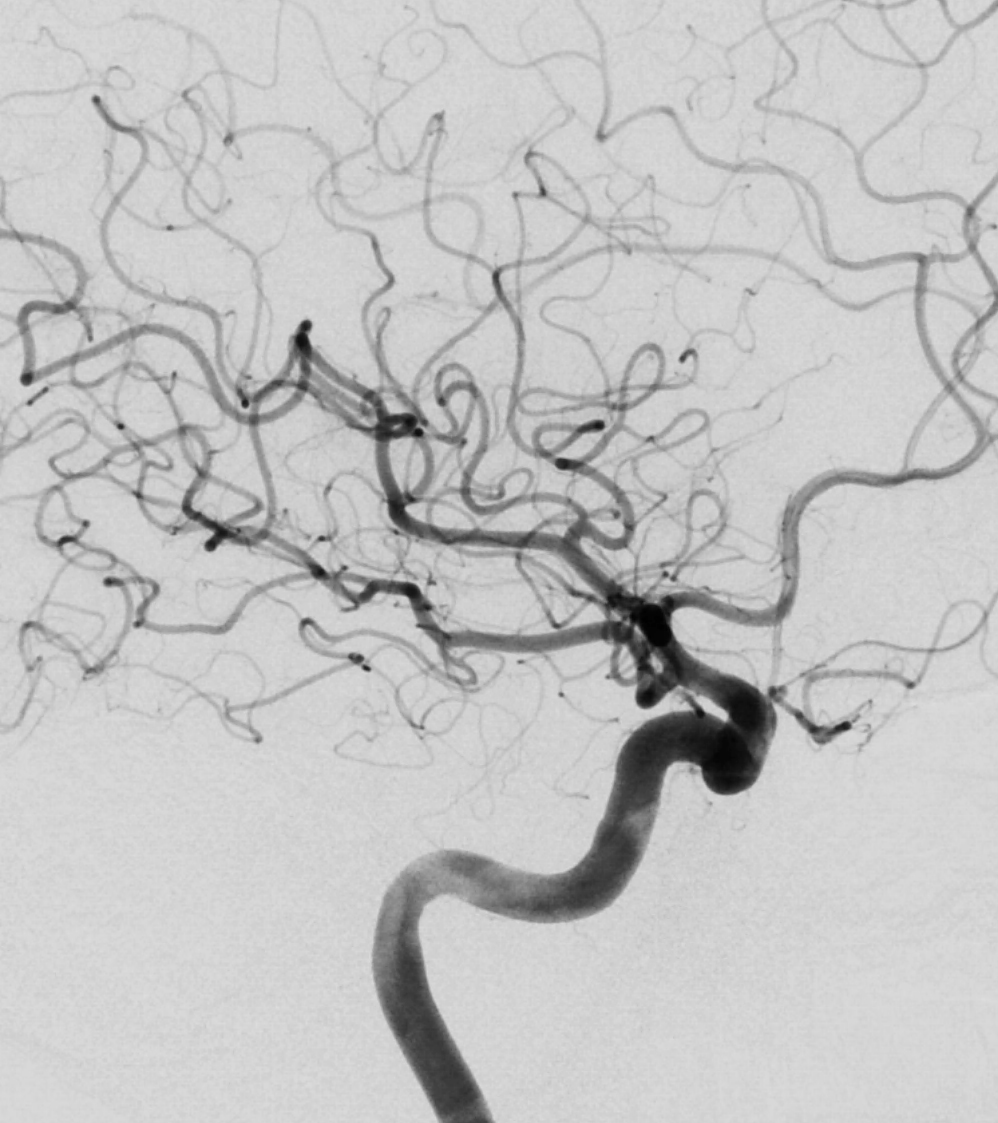