Temporary clip ligation is no longer a last-resort approach only for controlling intraoperative rupture. In fact, I have a low threshold for using short periods of proximal arterial occlusion to decrease the turgor of the aneurysm; this maneuver significantly facilitates neck dissection, resulting in a very efficient and desirable clip construct of the afferent and efferent vessels while salvaging the perforating vessels.

After the initial stages of dissection and preliminary aneurysm neck exposure, the final dissection of the aneurysm and subsequent clip deployment is in order. From this point, the surgeon may proceed in one of two ways.

At times, immediate final neck dissection and permanent clip ligation is undertaken. For small, unruptured, narrow neck, well-visualized aneurysms requiring minimal dissection, this approach is ideal. In most other situations—broad neck and complex aneurysms requiring significant dissection—I prefer to facilitate permanent clipping through the use of partial regional temporary circulatory arrest (temporary clipping of the proximal aspect of the aneurysm-bearing vessel). This maneuver significantly reduces the turgor in the sac and allows safe mobilization of the aneurysm neck during potentially high-risk maneuvers without “fighting” the sac.

Complete regional temporary circulatory arrest requires temporary occlusion of the afferent and efferent vasculature directly connected to the aneurysm. This mode of temporary clipping is rarely required (during opening of the sac for thrombectomy or its complete deflation) and carries a real risk of distal ischemia.

Maintenance of normovolemia and normotension (or even slight hypertension) augments collateral support for neural survival and is critical for the safety of temporary clipping. Adequate intravascular volume must be ensured using fluid replacement to counteract the initial osmotic diuresis used by most neurosurgeons during the initial stages of the operation.

As mentioned previously, I frequently use temporary occlusion because it provides significant advantages. Occluding the proximal afferent vessels supplying an aneurysm facilitates slackening of the aneurysm because the blood no longer pulsates directly into the sac. This decompression is advantageous during the final steps of microdissection since the sac’s relaxation facilitates mobilization of the aneurysm dome and neck, enabling me to thoroughly inspect the neck and the surrounding anatomy, while providing ample space for the clip blades.

At this time, maneuvers that have a higher likelihood of inducing aneurysm rupture may be undertaken with greater impunity. For example, the perforating and efferent arteries that adhere to the aneurysm dome may be separated without unwanted traction on these vital vessels.

Once the aneurysm is slackened, it is possible to apply traction to both the aneurysm and adherent artery, thus enabling the use of sharp dissection for separation of the two structures. Similarly, the relaxation of the sac facilitates greater mobilization of the aneurysm and circumferential neck visualization; this maneuver reduces the total operative area around the aneurysm neck that is blind to the surgeon. As such, temporary clipping is very useful during the dissection and subsequent permanent clipping of the giant aneurysms that portend to block adequate inspection of the surrounding anatomy.

The number of vessels that must be occluded during surgery depends on the vascular pedicles supplying the aneurysm and the amount of slackening required for neck exposure. Usually a single temporary clip on the dominant afferent artery is sufficient for the surgeon’s needs. Although a single temporary clip may be sufficient for middle cerebral artery aneurysms, two temporary clips may be required for difficult anterior communicating artery aneurysms with codominant A2’s. Realistically, I never know how many temporary clips will be required until I apply the initial clip to the major feeding parent artery and “nudge” the dome with a blunt dissector, which allows me to approximate the extent of sac deflation.

The number and size of the temporary clips must balance the extent of occlusion and relaxation sought by the surgeon. The introduction of numerous temporary clips into the operative field is counter-productive because they will obstruct the surgeon’s view and crowd the operative space that is much needed for angling the clip appliers for permanent clipping. Thus, temporary clip placement is not trivial. Improper placement often requires the removal and subsequent replacement of the clip in a more appropriate position in order to use the fewest clips possible.

Figure 2: A temporary clip is being placed across the internal carotid artery at the skull base (left image) in expectation of deflation of a complex multilobulated posterior communicating artery aneurysm (right image). The upper pole of this aneurysm’s dome is adherent to the lateral carotid wall. Deflation of this complex aneurysm allows expanded working angles around the neck for deployment of the permanent clip while protecting the origin of the posterior communicating artery. 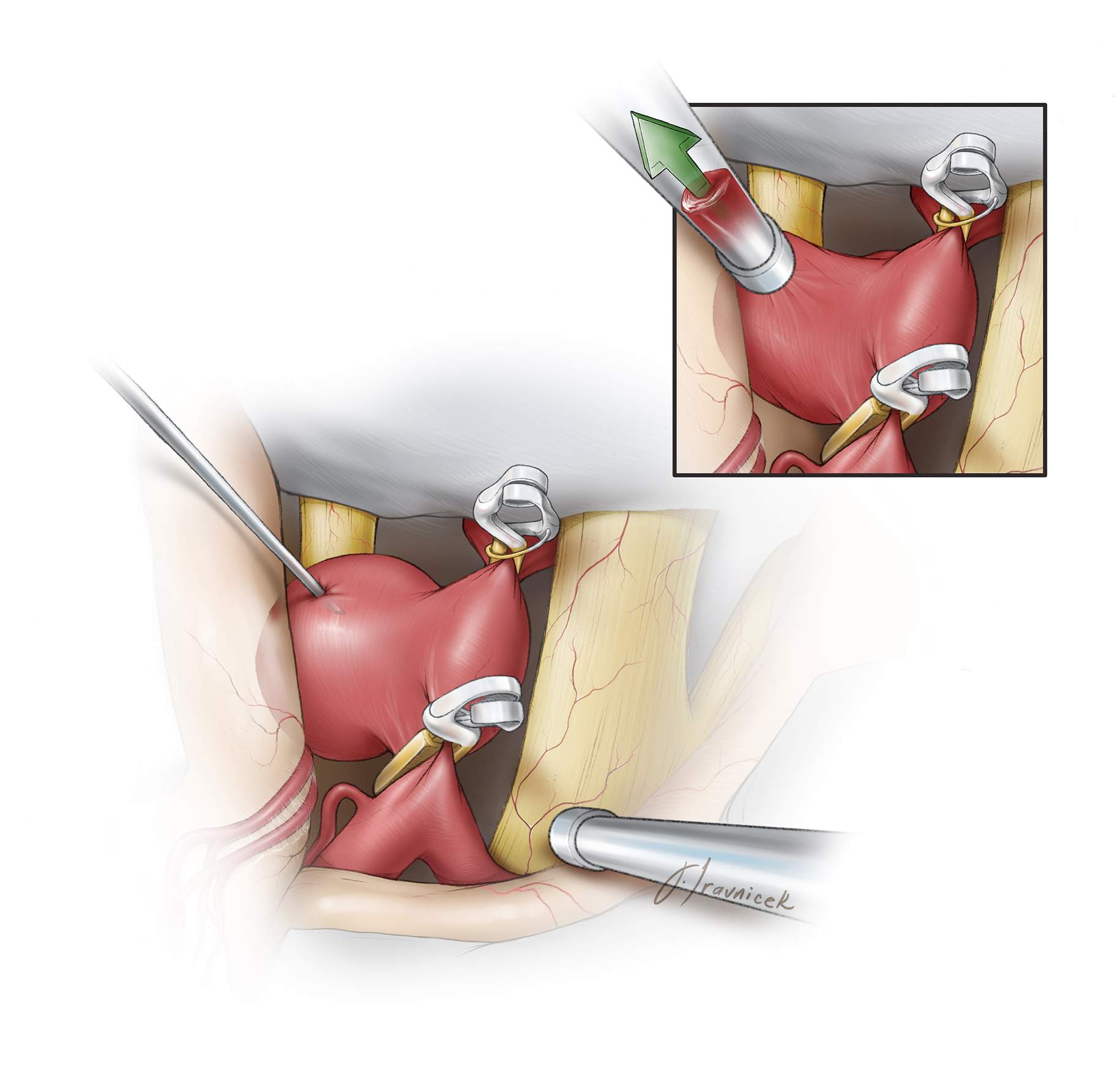 Figure 3: A patient with a posterior communicating artery aneurysm presented with oculomotor nerve palsy. The aneurysm was trapped and deflated (inset image,) using a needle in expectation of final permanent clip application. 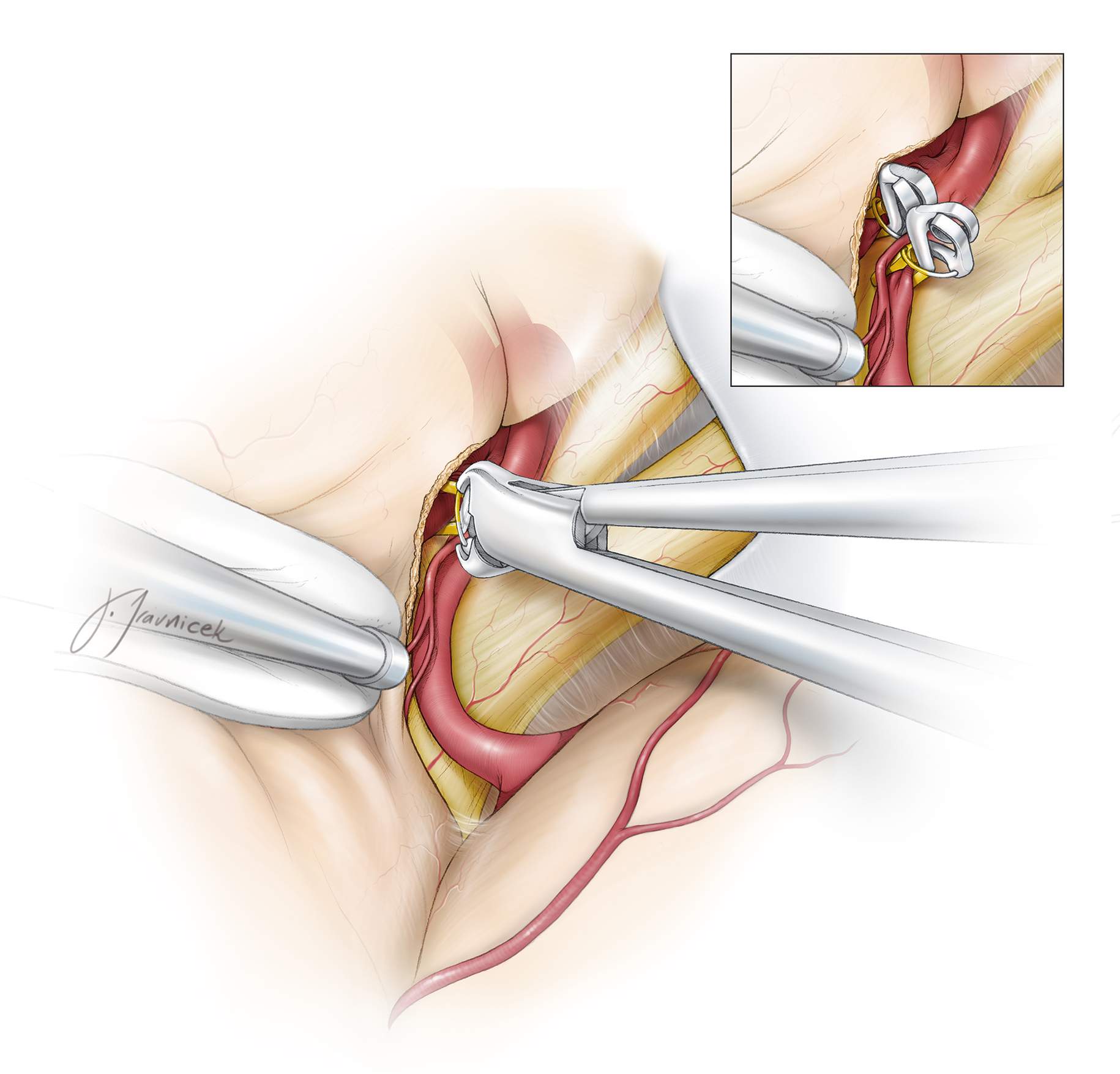 Figure 4: Temporary occlusion of the afferent A1 segments during clipping of an anterior communicating artery aneurysm is shown. A temporary clip is first placed on the contralateral A1, if it is dominant, because this feeding branch is minimally accessible in the event of an intraoperative rupture. The ipsilateral A1 remains very accessible and is left unclipped to provide some perfusion. If additional sac relaxation is desired, an ipsilateral clip is implanted (inset image). 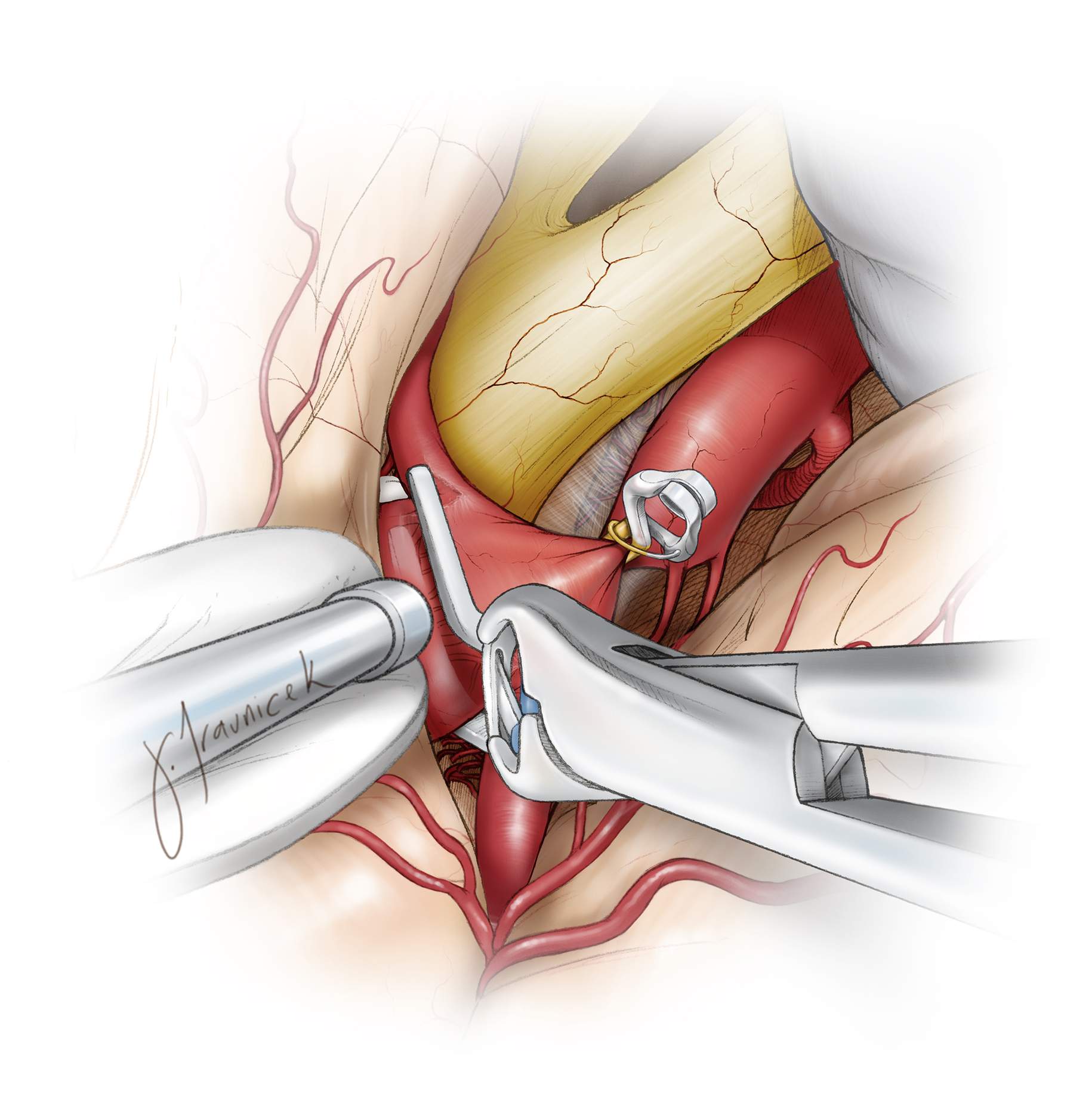 Figure 5: An internal carotid bifurcation aneurysm is clip ligated using temporary occlusion. This maneuver allows deflation of the sac and circumdissection of the neck to protect the medial perforators during unobstructed passage of the clip blades. If the sac is not deflated, the tip of the clip blades can potentially harm the sac during blind passage of the medial blade. Figure 7: Temporary clip ligation of the vertebral artery provides deflation of a posterior inferior cerebellar artery aneurysm. This maneuver allows manipulation of the sac for complete exclusion of the aneurysm within the small working space around the cranial nerves. 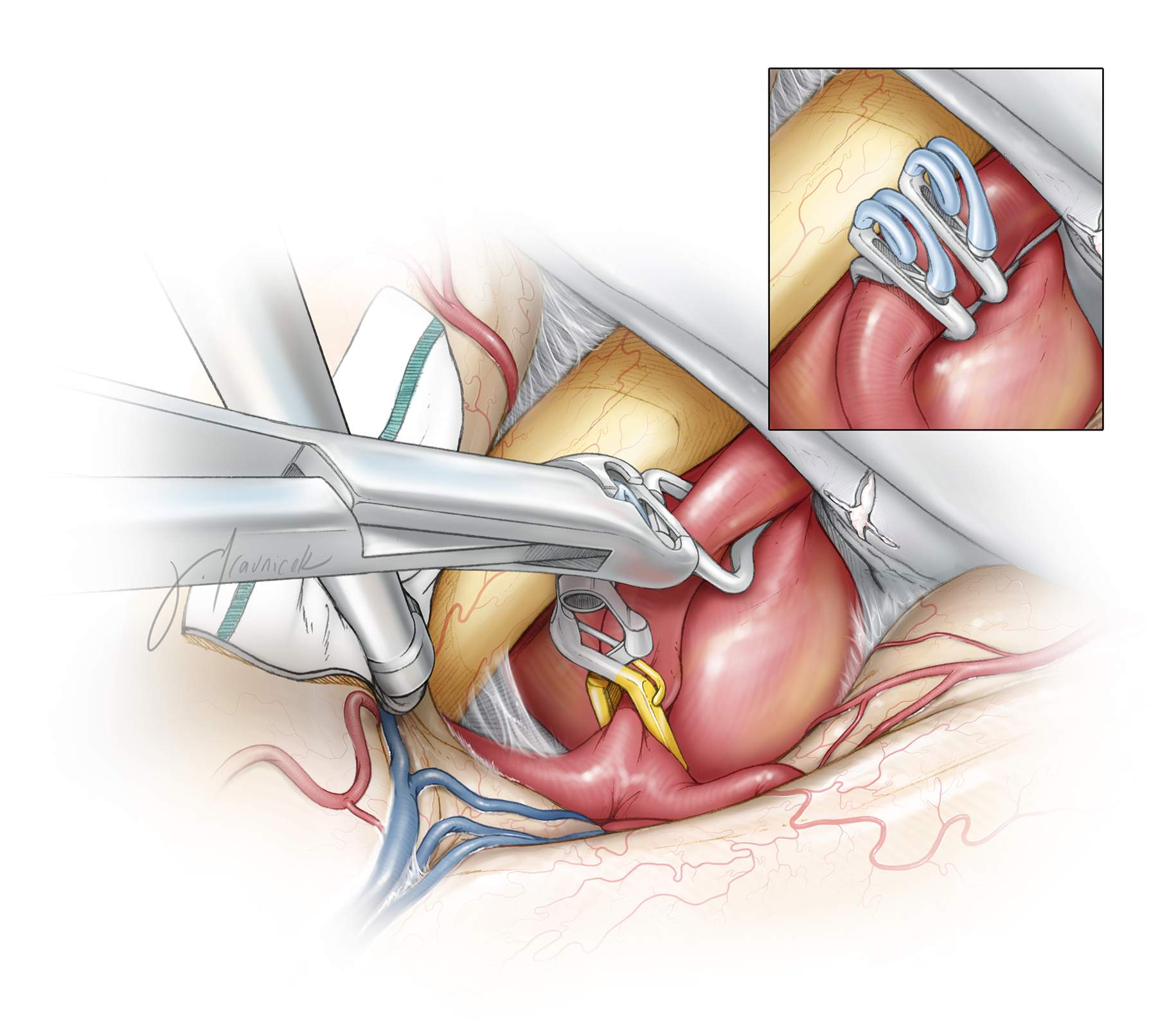 Figure 8: Distal temporary clipping is used during retrograde suction-decompression technique for clip ligation of a large posterior communicating artery aneurysm. The aneurysm is then clipped via two right-angled fenestrated clips (inset image). During this technique, a balloon-tipped catheter is placed in the cervical carotid artery for its temporary occlusion. The balloon is inflated and a temporary clip is applied on the internal carotid artery, distal to the aneurysm, while suction through the intravascular catheter dramatically collapses the aneurysm.

The Use of Retrograde Suction-Decompression Technique for Paraclinoid Aneurysms

Unfortunately, temporary aneurysm clipping is not a benign process. The occlusion of blood flow to the aneurysm also occludes the blood flow to the parenchymal territory supplied by the clipped vasculature. Prolonged temporary clipping may result in cerebral infarction and its subsequent neurologic sequelae.

The length of time for which a temporary clip may be applied before irreversible cerebral injury occurs strictly depends on the vascular territory involved and the patient’s hemodynamic status, including the robustness of corresponding collateral circulation. Trapping the target vascular territory versus proximal occlusion alone plays an important role. If the parenchymal territory is supplied by multiple segments of the cerebral vasculature, temporary occlusion may be safely applied for a longer period of time.

For aneurysms in the territories with minimal collateral supply (such as trapping the M1 segment spanning the end-artery lenticulostriate perforators and trapping the A1 segment spanning the recurrent artery of Heubner,) the temporary occlusion time should be kept to less than 3 to 5 minutes, while burst suppression is induced using pharmacologic protection (barbiturates, etomidate). Electroencephalography is used to monitor the level of suppression. One must work quickly to allow reperfusion and avoid tissue damage.

Burst suppression is achieved in about 2 minutes using etomidate doses in the range of 0.4-0.5mg/kg. The dose is titrated until 8 to 10 screens of silence appear among bursts of activity. Additional doses of 0.1mg/kg are administered as the number of silent screens decreases to 4 or 5. After 15 minutes, additional doses of 0.1 mg/kg are necessary for young patients.

Territories with more robust collateral support (the proximal internal carotid artery,) can undergo temporary occlusion for approximately 10 minutes without a significant risk of ischemic injury. If the patient is hypotensive or volume depleted, the ability of the cerebral blood flow mechanisms to ensure continued oxygen supply to the affected parenchymal territories will be limited and the temporary occlusion time interval will be shortened.

The amount of aneurysm slackening achieved through temporary clipping is directly related to the risk of ischemia in the corresponding vascular territory. This natural tradeoff must be considered during operative planning.

In some cases, it may be impossible to apply a permanent clip within a safe time frame. In these instances, intervals of reperfusion may be built into the temporary occlusion time. Once rupture has occurred, reperfusion is no longer possible. Similarly, once the surgeon has opened the aneurysm to perform decompression or vascular remodeling, he or she will not be able to perfuse the distal territories until the aneurysm is properly closed. Therefore, for thrombotic aneurysms, trapping of the parent segments should be performed only after the aneurysm is opened and a reasonable portion of the thrombus removed.

Although temporary occlusion may not be needed in a flawless aneurysm clipping procedure, it should never be far from the surgeon’s mind as he or she continues to dissect and implement increasingly risky surgical maneuvers.

Calcified and large vessels, such as the internal carotid artery, may not collapse when temporary clips are used. In these instances, I use two temporary clips or one permanent clip that has been used extensively before with a weakened closing pressure. Naturally, one should not be aggressive when closing calcified walls; this may lead to intimal dissection and vessel occlusion. In these situations, temporary occlusion may not be readily available, and alternative methods, such as endovascular techniques using intraluminal balloon occlusion, are considered.