The parasagittal craniotomy exposes lesions along the paramedian hemispheres and superior sagittal sinus. This basic cranial exposure provides access to the superior sagittal sinus itself and can be extended across the midline for complete control over the sinus. Because of numerous bridging veins and the inconsistent location and size of parasagittal venous lakes, operating in this region can be difficult. The risks of profuse blood loss and life-threatening venous air embolism are significant and therefore appropriate precautions are necessary.

Neuronavigation guides the extent of the craniotomy. If large bridging veins are suspected on preoperative contrast-enhanced magnetic resonance (MR) imaging, an MR or CT venogram is indicated to plan the location and extent of the craniotomy based on the exact locations of large veins. These imaging modalities will also confirm the patency of the superior sagittal sinus in the presence of infiltrating meningiomas. If numerous parasagittal veins prohibit exploration of the ipsilateral interhemispheric corridor, the contralateral interhemispheric transfalcine route may be considered for parafalcine lesions.

If the tumor has infiltrated the lumen of the sagittal sinus, the risk of air embolism is significant. In this situation, preoperative cardiac diagnostic tests should be performed to exclude the risk of a paradoxical air embolism. Transesophageal and transthoracic Doppler echocardiography should be used during surgery. The operator should have a low threshold for suspicion of an air embolism, especially for the patients in the semi-sitting position. In high-risk cases, a central venous catheter and a precordial Doppler are necessary.

Since the basal cisterns are not readily accessible, large tumors with associated cerebral edema can lead to cerebral herniation during the dural opening. Such tension can lead to cortical injury, and the surgeon may be tempted to use aggressive retraction to expose the tumor. In addition, during the craniotomy, the Cerebrospinal fluid (CSF) drainage via a lumbar drain decompresses the dura away from the bone and protects the venous sinuses during drilling.

I use lumbar CSF drainage to facilitate brain relaxation regardless of the large size of the tumor. For large tumors with midline shift, the CSF is drained while the dura is being opened; this timing of CSF drainage decreases the risk of brain shift. If there is a significant amount of vasogenic edema, mannitol and steroids are useful adjuncts.

An understanding of parasagittal venous anatomy is important for safe execution of the craniotomy. 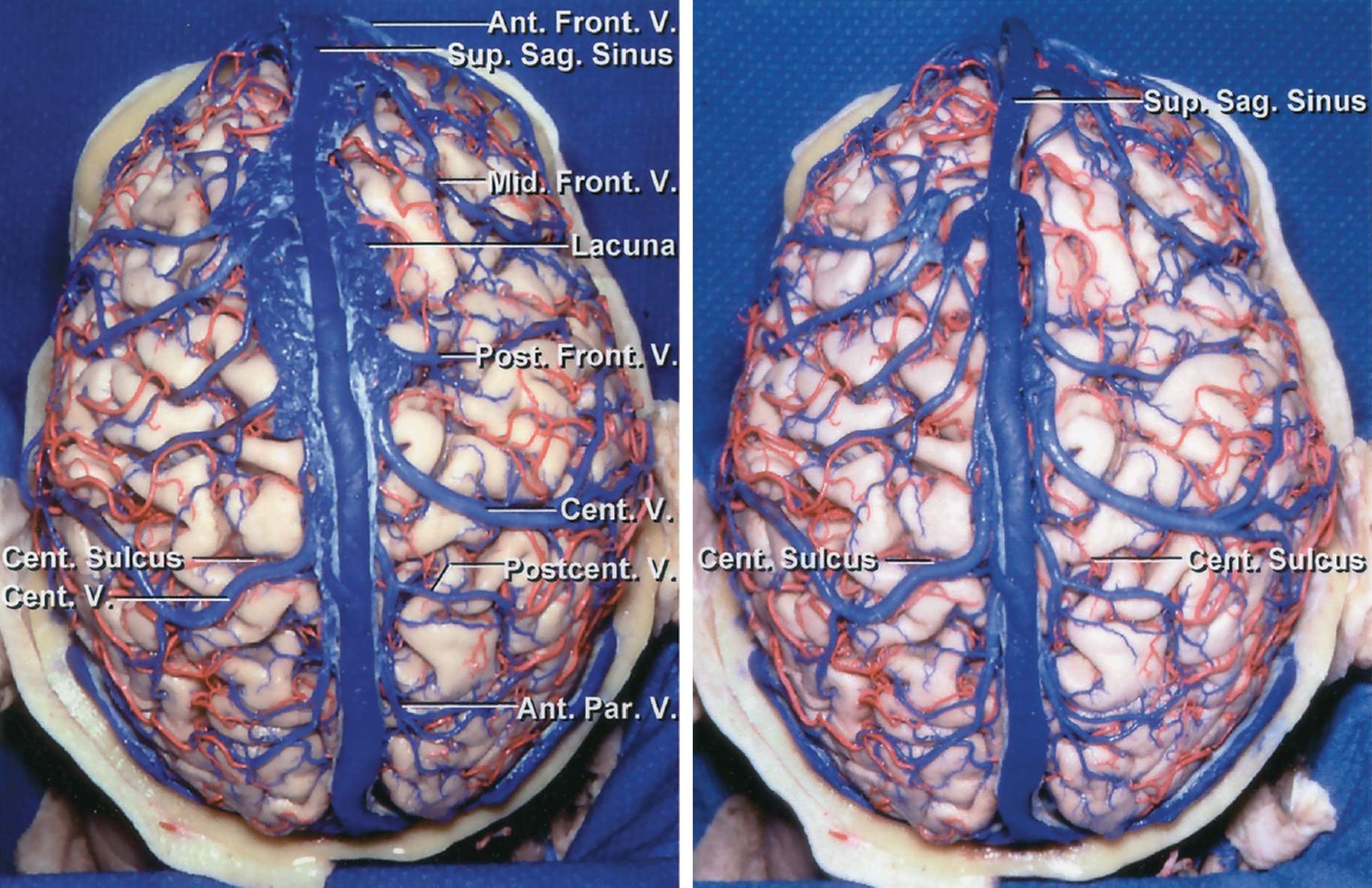 Figure 1: Configuration of the superior sagittal sinus, lacunae, and major bridging veins: The parasagittal bridging veins are highly important and their preservation is critical. Occasional sacrifice of one or two small veins along the anterior sinus may be tolerated. In the middle and posterior thirds of the sinus, the bridging veins are indispensible for drainage of the hemisphere; their sacrifice places the patient at serious risk of venous infarction.

The sinus caliber increases from the anterior to the posterior direction. Unpredictable paramedian venous lakes (lacunae) can extend far laterally, beyond the edges of the sinus and bleed profusely during dural opening close to the midline. Note that the parasagittal veins travel from the posterior to anterior direction (left image). The venous lacunae have been removed to show the drainage patterns of the parasagittal veins into the sinus (right image)(Images courtesy of AL Rhoton, Jr). 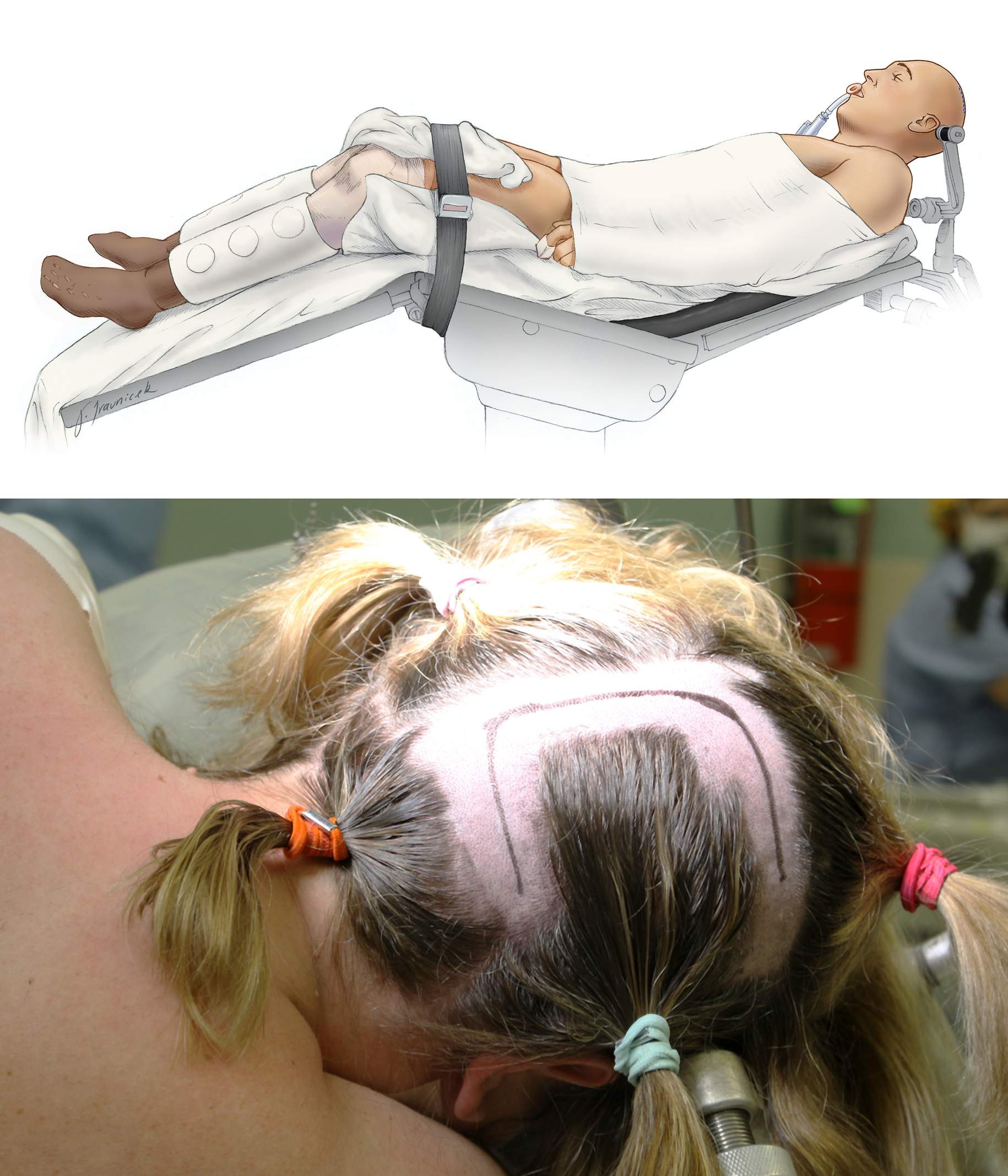 Figure 2: For tumors affecting the anterior and middle third of the sinus, the patient is positioned supine with the head in the neutral position (top). I prefer the tumor at the highest point in the operative field; however, overzealous elevation of the head can significantly increase the risk of air embolism. For lesions affecting the posterior third of the sinus, I prefer the lateral position (bottom), which precludes the need for significant elevation of the head while allowing gravity to clear the blood from the operative field. 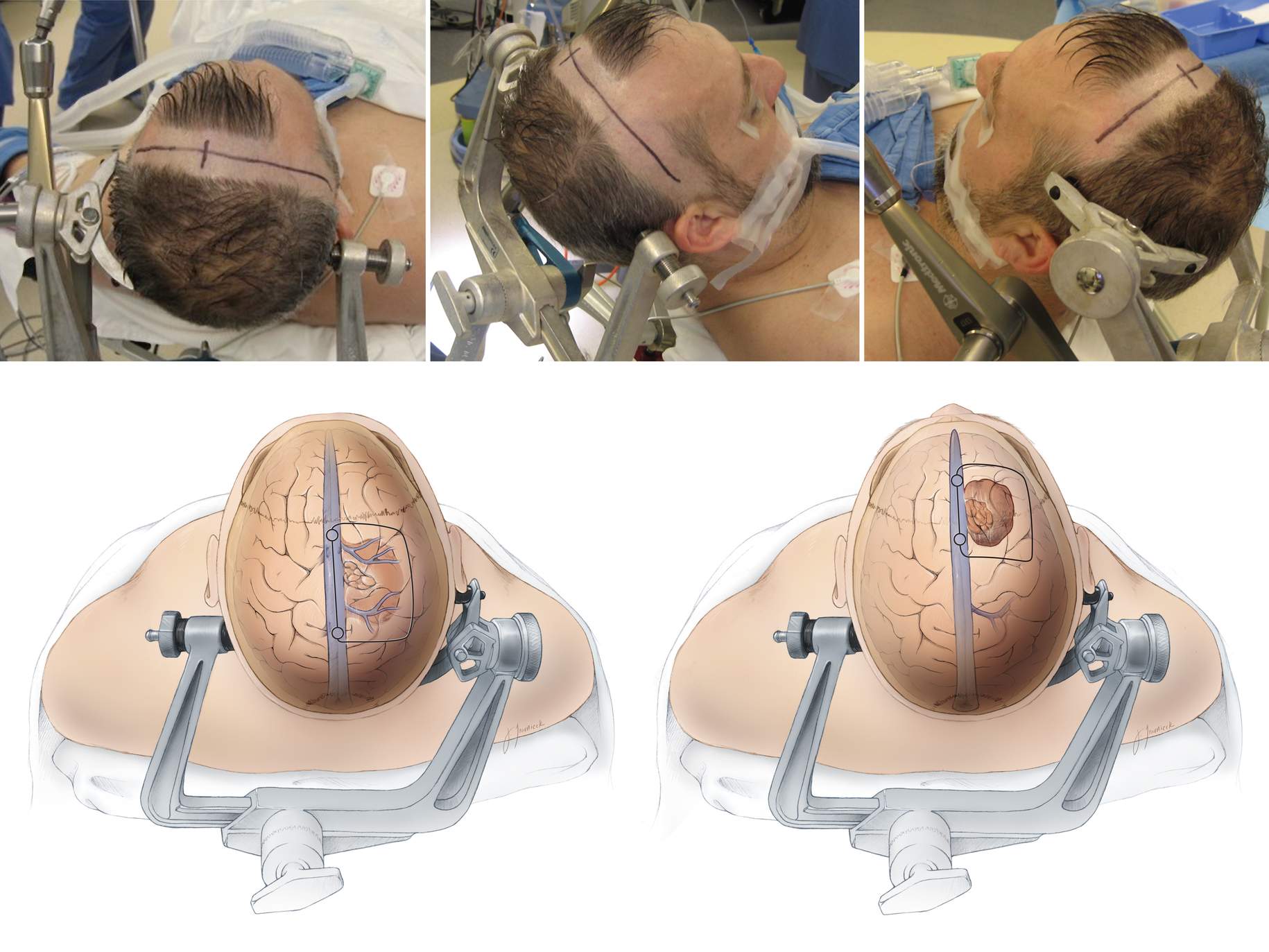 Figure 3: The head is secured in a skull clamp and flexed to make the tumor accessible while providing an ergonomically comfortable position for the surgeon to operate. I prefer a linear incision for tumors of all sizes (top images: note the location of the pins for the skull clamp). Some operators prefer a U-shaped incision for larger lesions (bottom images).

I use neuronavigation and/or preoperative MR or CT venogram to determine the best position for the craniotomy. This tool localizes and protects parasagittal bridging veins, especially for procedures requiring interhemispheric dissection. If I plan to expose the superior sagittal sinus, the incision crosses the midline. Neck flexion is necessary for more posteriorly located tumors within the middle third of the sinus (left lower image). If the tumor is more anterior, the patient’s head may be held in a neutral position (right lower image).

Figure 4: For parasagittal lesions that require control of the midline, I place two burr holes directly over the superior sagittal sinus. The sinus is typically deviated to the right of the sagittal suture; the maximum deviation is usually no more than 11 mm. Early identification of the sinus helps me plan the size and location of the final bone flap.

A Penfield #3 dissector is used to generously dissect between the inner table of calvarium and the wall of the superior sagittal sinus. If the wall of the sinus is adherent, a third burr hole should be placed; all burr holes should be readily in continuity within the epidural space. Cerebrospinal fluid drainage through the lumbar drain mobilizes the wall of the venous sinus and the dura away from the bone, therefore preventing their injury by the footplate of the drill.

Figure 5: The last bony cut should be made over the venous sinus (left image). This maneuver allows timely elevation of the bone flap if bleeding is encountered and an injury to the sinus is suspected. If the lesion extends to near the sinus or interhemispheric fissure, the corresponding length of the sinus is exposed (right image, arrows point to the location of the venous sinus).

Upon elevation of the bone flap, mild to moderate bleeding from the sinus wall may be controlled with thrombin-soaked gelfoam or SURGICEL Fibrillar (Medline Industries, Somerville, NJ). The latter is left in place untouched during closure. Please refer to the chapter on Repair of Dural Venous Sinus Injury for details related to managing severe injuries to the sinus. Aggressive coagulation of the dura is avoided as this maneuver may increase the tear along or the hole within the sinus wall.

This step has the highest risk of venous air embolism. Unexplained hypotension, decreased end-tidal Pco2, and a dramatically “dry” operative field should increase the operator’s suspicion of this complication. 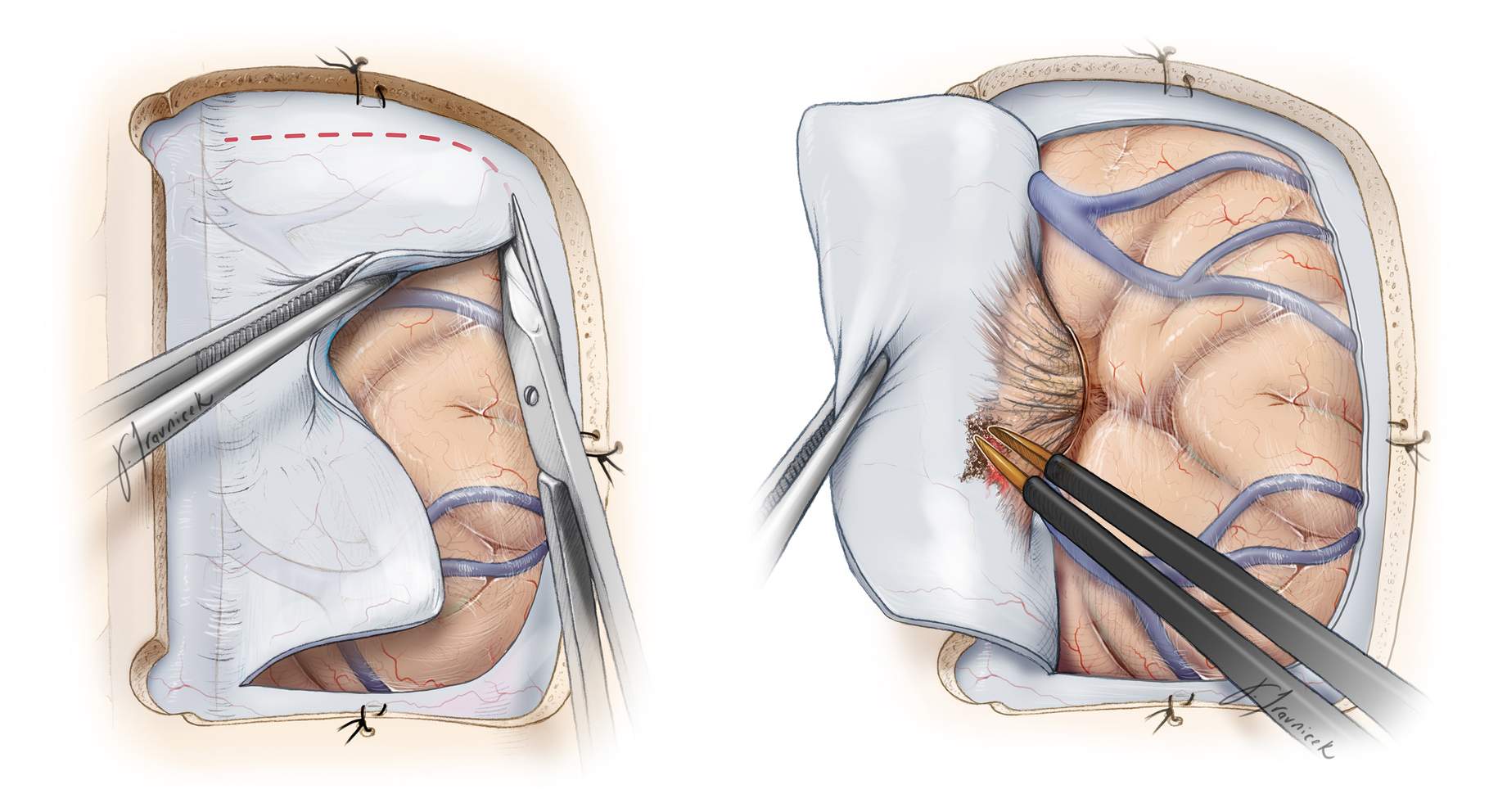 Figure 6: If I plan to reach the interhemispheric space (shown in the illustration), I open the dura in a curvilinear fashion and create a dural flap based on the venous sinus. Care is taken not to injure any large draining vein. Initial opening of the dura away from the superior sagittal sinus allows early identification of the cortical veins and reliable recognition of their midline drainage patterns. 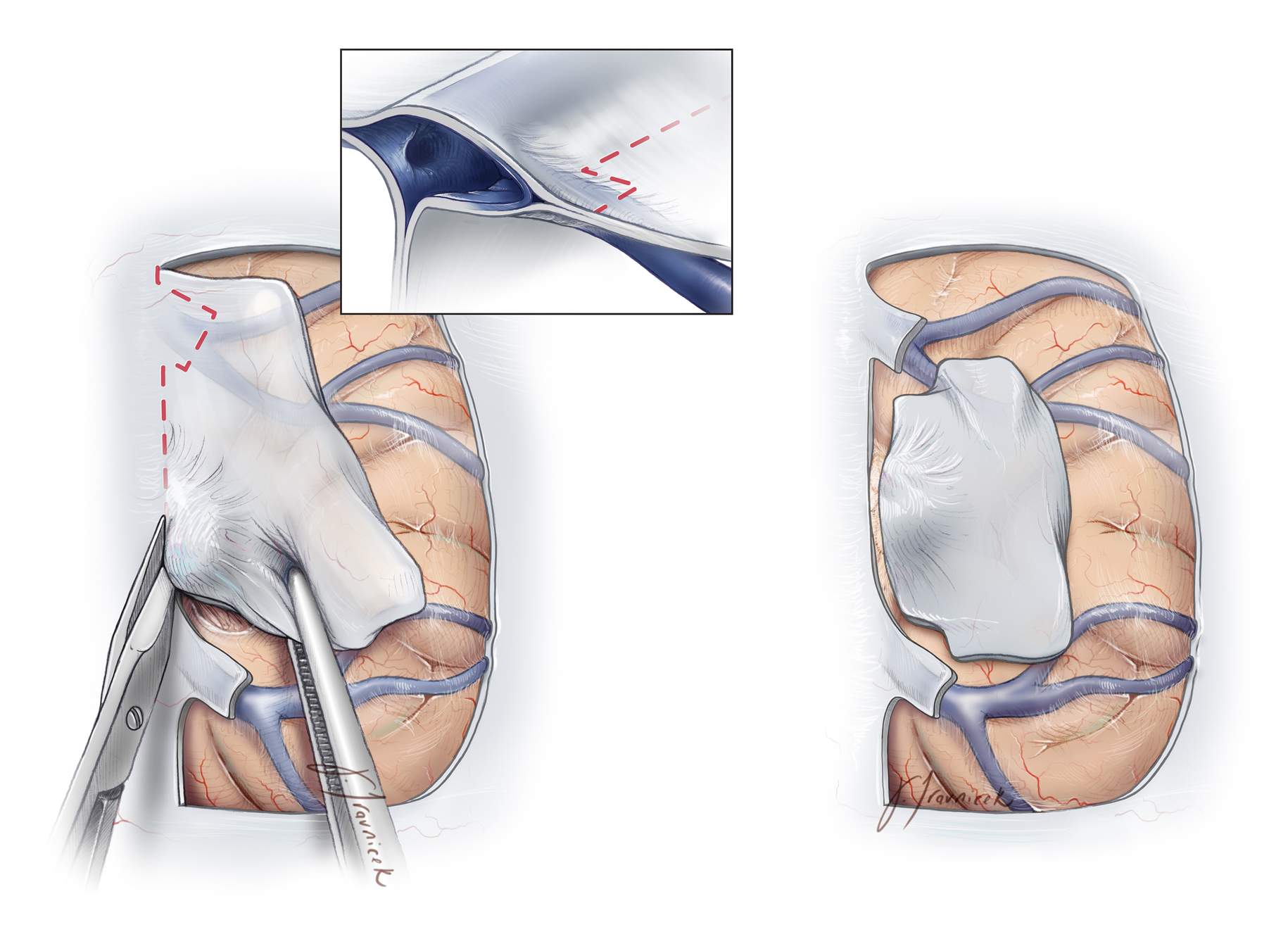 Figure 7: If a parasagittal vein is encountered draining into the sinus, the dural opening must be adjusted to protect the vein’s inlet into the sinus (left image, inset). If the edge of the superior sagittal sinus is inadvertently cut during medial dural incision, the most medial part of this incision should be closed using fine sutures. Bipolar electrocautery will compound the problem as it will shrink the dural edges, expand the tear, and cause profuse bleeding. If a tumor-infiltrated dura needs to be removed, the parasagittal veins must be respected (right image).

Paramedian extensions of the superior sagittal sinus or venous lakes are frequently encountered in this region. They may limit dural opening close to the midline and restrict access to the interhemispheric fissure. In this situation and near the midline, the dural incision may be extended parallel to the venous sinus or lake rather than perpendicular to it. 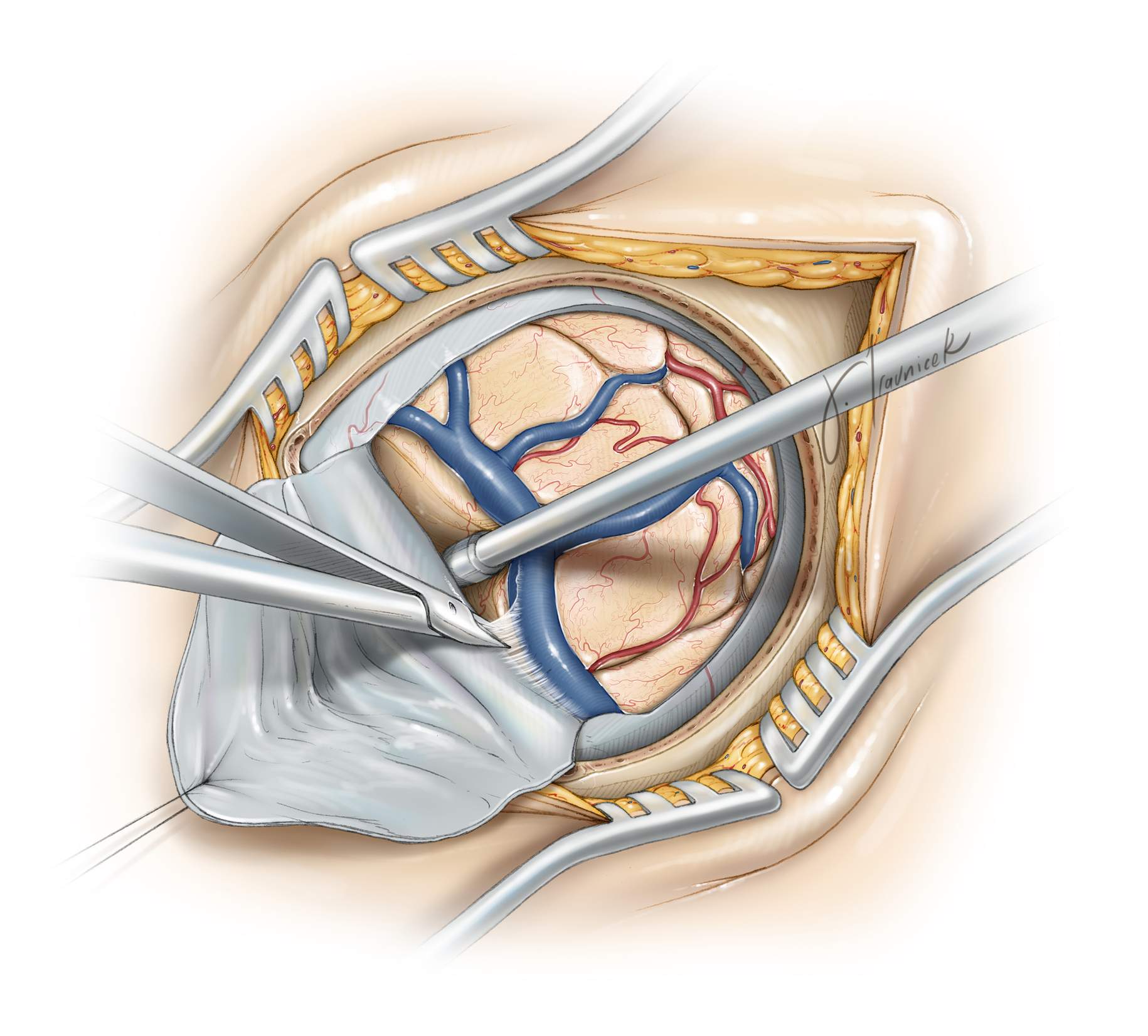 Figure 8: To reach the parafalcine space, I release the veins through their arachnoid adhesions and untether them in preparation for their mobilization. This maneuver may be tedious as the arachnoid membranes can be thick and highly adherent. Lumbar drainage of the cerebrospinal fluid affords early mobilization of the hemisphere away from the midline and the falx, facilitating this step. 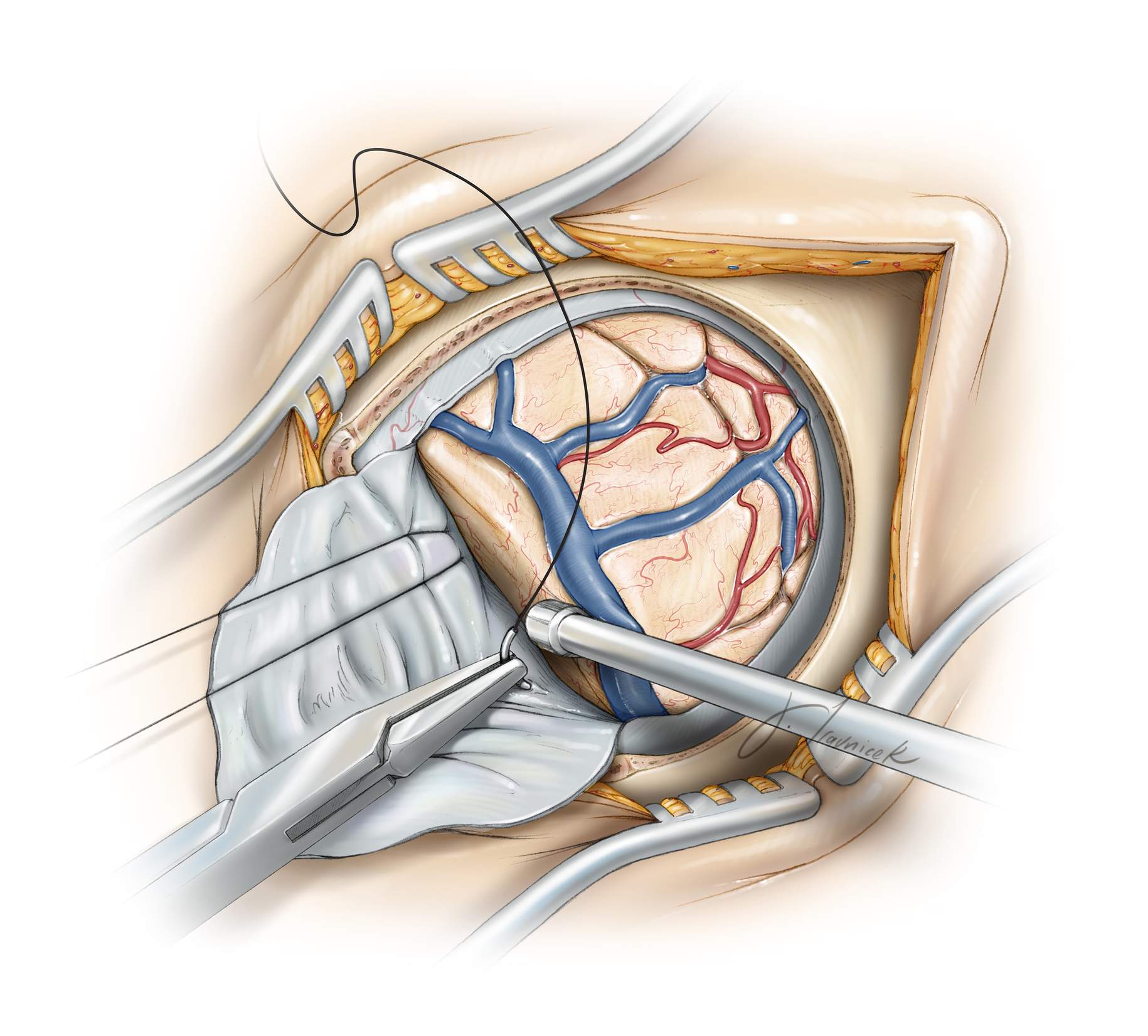 Figure 9: I place retraction sutures within the superior falx and just below the venous sinus and gently mobilize and rotate the superior sagittal sinus, thereby expanding the operative corridor and the working angles within the interhemispheric space.

Figure 10: For deep midline lesions, the next steps of microdissection within the interhemispheric corridor can now begin (left image). The parasagittal veins should not be placed under significant tension. If a cortical lesion is exposed (right image), the next steps of the tumor removal can begin.

Once the pathology is handled, hemostasis is achieved and attention turns to closure. A watertight dural closure is preferable, but I usually approximate the dura and do not insist on a watertight closure for supratentorial lesions. Tack-up stiches are not used close to the superior sagittal sinus. Hemostasis along the sinus is cardinal for avoidance of compressive postoperative epidural hematoma formation.