These dilated capillary vessels have an increased risk of focal hemorrhage, leading to seizures and focal neurologic deficits. The locations of CNS CMs occur proportionally to the CNS tissue volume, with 80% in the supratentorial space, 15% in the posterior fossa, and 5% in the spinal cord.

CMs are either sporadic or familial with an autosomal dominant mode of inheritance. Magnetic resonance imaging (MRI) has revolutionized their diagnosis with no need for a tissue sampling, and has also allowed a better understanding of their natural history.

The clinical manifestations, natural history, and radiographic diagnosis and classification of cavernous malformations are discussed in the following section. 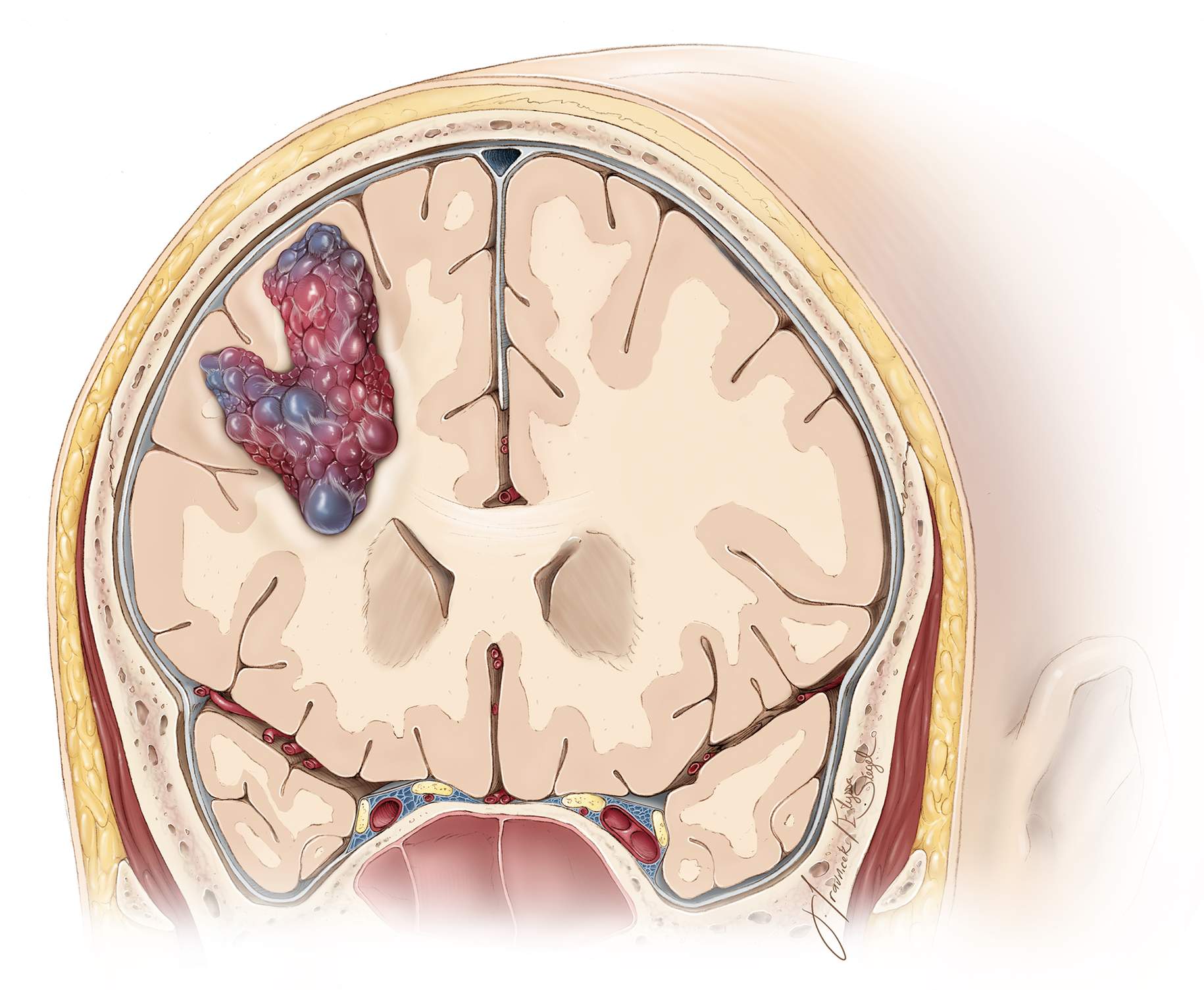 Figure 1: A typical appearance of a CM is illustrated. The abnormality has dilated sinusoids with no large feeder arteries or draining veins. These sinusoids are in various stages of bleeding, thrombosis and organization. There is no intervening neural tissue. Their lack of intervening neural tissue and prominent feeding or draining vessels pathologically distinguishes CMs from developmental venous anomalies, capillary telangiectasias, and micro-arteriovenous malformations.

Patients with CMs typically present with seizures, focal neurological deficits, and occasionally with acute intracerebral or intraventricular hemorrhage. Up to 20% of patients present incidentally, without symptoms related to the CM, while undergoing diagnostic tests for headaches. The presenting symptoms obviously depend on the location/size of the malformation and associated hemorrhage.

Supratentorial CMs most commonly present with seizures. In asymptomatic patients, the rate of new onset seizures has been estimated around 1.5% to 2.4% per patient-year. The development of seizures is most likely due to the deposition of iron, a known epileptogenic material found in hemosiderin and associated with recurrent episodes of hemorrhage. Focal deficits are far less common with supratentorial as compared with infratentorial lesions.

Patients presenting with focal neurologic deficits are more likely to harbor a CM involving the brainstem and basal ganglia. Small hemorrhages in these regions can cause acute deficits because of their proximity to critical ascending/descending tracts and deep nuclei. Symptoms tend to resolve as the hemorrhage is absorbed. Repeat hemorrhages may be associated with more severe neurologic deficits and an increased risk of a permanent deficit.

The natural history of CMs has been extensively studied, but a clear understanding of the risk of seizures and recurrent hemorrhage remains to be elucidated. The natural history is most likely similar for the familial and spontaneous forms.

Familial cavernous malformations are inherited in an autosomal dominant fashion, and there is a strong family history of seizures and presentation with multiple CMs in 80% to 90% of patients. The clinical penetrance is extremely variable with up to half of patients presenting asymptomatically. In one study by Zabramski and colleagues, six families with a familial form of CMs were followed. The symptomatic hemorrhage rates were 1.1% per lesion-year and 6.5% per patient-year. The average number of lesions shown on MRI was 6.5 lesions per patient. Del Curling and colleagues showed that the spontaneous form was associated with 1.34% risk of seizures per person-year in 26 patients who presented with a single malformation.

Hemorrhages that violate the lesion’s capsule indicate an increased risk for recurrent symptomatic hemorrhage. These hemorrhages are referred to as overt extra-lesional hemorrhages and are associated with particularly high rates of repeat hemorrhage closer to the initial event.

Spinal cavernous malformations are rare, and therefore available data on their natural history is limited. Hemorrhage rates are most likely similar for spinal and other CNS CMs. Patients with symptomatic hemorrhage tend to clinically progress; resection within 3 months is advised because of high rehemorrhage rates.

For diagnosis, MRI is the preferred imaging method for CMs. Before the advent of MRI, diagnosis of CMs was made using computed tomography (CT) and some small CMs were easily overlooked.

The typical CT findings are a well-circumscribed heterogeneously hyperdense mass with variable calcification and little to no enhancement. Based on these imaging characteristics, the differential diagnosis includes other vascular malformations, a hematoma, and a calcified or hemorrhagic neoplasm. Angiography may be used if there are concerns for abnormal vascularity, particularly given that CMs are often associated with DVAs.

CMs are typically avascular with no detectable feeding arteries or draining veins on imaging. Despite the use of MRI and magnetic resonance angiography (MRA), catheter angiography may be occasionally necessary to differentiate extra-axial CMs from other malformations or extra-axial tumors such as meningiomas. Parasellar CMs have minimal or rare feeding arteries, whereas parasellar meningiomas have hypervascularity and even rarely arteriovenous shunting. Single-photon emission computed tomography (SPECT) imaging may also be useful because CMs have low uptake, whereas meningiomas demonstrate high uptake. Sylvian and insular CMs may mimic a partially thrombosed MCA aneurysm on MR imaging.

On MRI, the appearance of CMs is often quite unique. Dilated sinusoids lack large feeding arteries or draining veins and are in various stages of thrombosis and organization from bleeding. These changes have been referred to as a “popcorn” or “berry” appearance and tend to be most striking on the T2-weighted sequence. There is no intervening neural tissue within the CM.

The hemosiderin, which demonstrates prominent low signal intensity blooming on gradient echo (GRE), susceptibility weighted imaging (SWI) and even T2-weighted sequences, is most prominent in the rim of CMs, but is also often present within septae throughout the lesions.

Many lesions can mimic the appearance of CMs and must be ruled out. These lesions include thrombosed arteriovenous malformations, thrombosed aneurysms, calcified low-grade gliomas, and hemorrhagic neoplasms. Metastatic disease is an important consideration in the setting of multiple CMs but can usually be excluded based on the lack of surrounding edema seen with most quiescent CMs. Follow-up imaging after the hemorrhage has resolved is important to identify the underlying lesion, often not apparent on the initial scans. 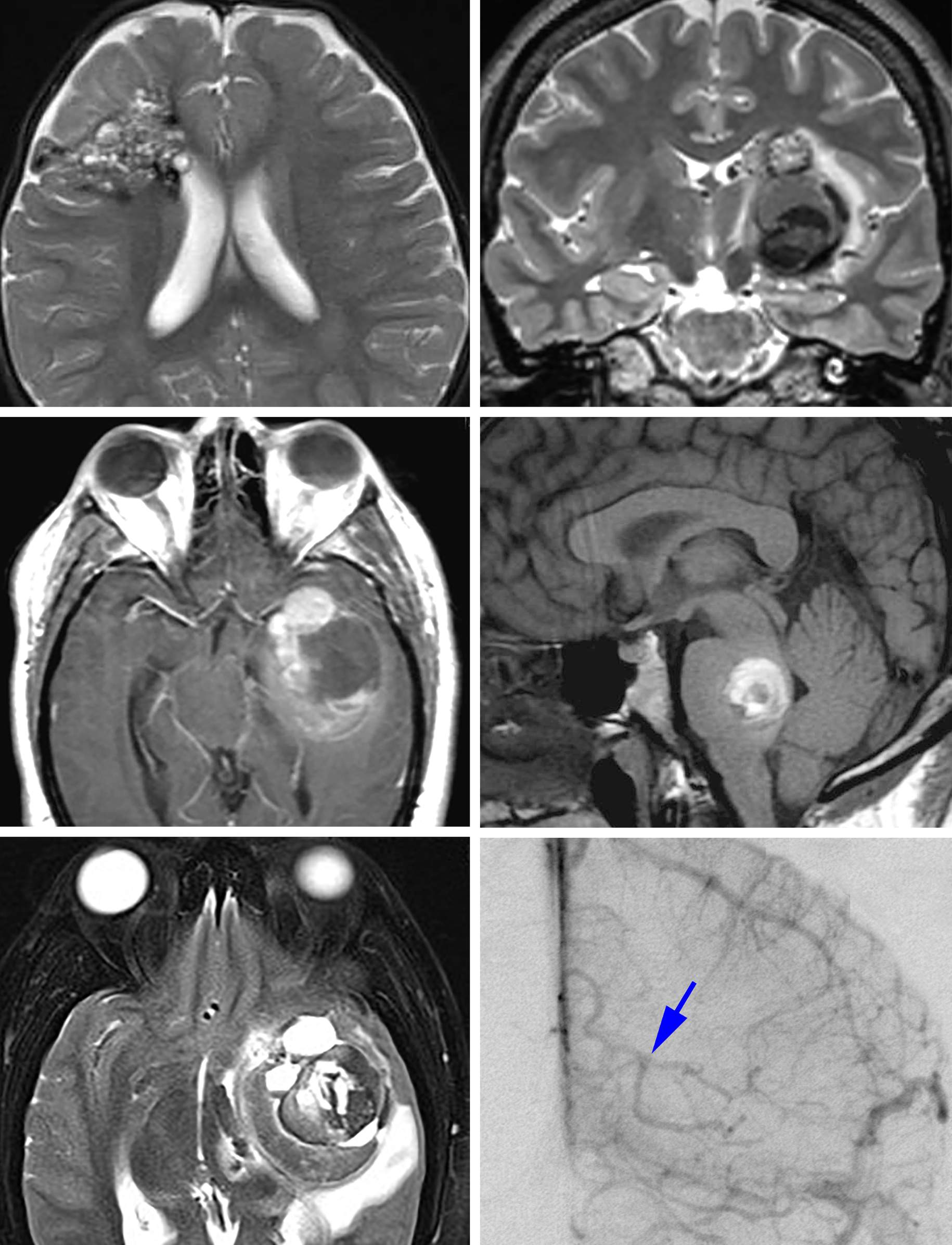 Figure 2: The typical imaging characteristics of CMs have been referred to as the “popcorn” or “berry” appearance (left upper image). More prominent extracapsular hemorrhagic foci are usually present in symptomatic lesions (middle row). An anteroposterior left-sided ICA angiogram for a left insular CM (lower left image) reveals an “occult” malformation; the developmental venous anomaly is, however, evident (lower right image-arrow) and is suggestive of the diagnosis. Note that CMs can mimic gliomas (middle left image) or partially thrombosed aneurysms (lower left image). Note the evidence of overt extacapsular hemorrhage in all of the above MR images except the upper left image.

Figure 3: Susceptibility weighted imaging (SWI) and gradient echo (GRE) sequences often play an important role in the diagnosis of CMs. In the T2-weighted left image, a cerebellar cyst was suspected, but upon the review of the minimum intensity projection (mIP) reformats of the SWI sequence, the appearance of the hypointense lesion is most consistent with a CM.

In patients with familial or multiple CMs, GRE or SWI sequences are beneficial in identifying the number of lesions overlooked by conventional pulse sequences.

The most commonly used classification system divides CMs into four subcategories based on their pathologic correlation and CT/MRI appearance. This system was described by Zabramski and colleagues in 1994 by means of their prospective study of 128 CMs. Type I lesions are homogeneously hyperintense on T1WI and predominately contain subacute hemorrhage. With more chronic hemorrhage, a hypointense rim on T2WI develops as a result of hemosiderin-laden macrophages and iron deposition associated with hemoglobin breakdown.

Type II lesions are more multinodular, heterogeneous lesions typically referred to as having a “popcorn” core. This heterogeneous pattern on T1WI and T2WI occurs as a result of hemorrhage in various stages of breakdown septated by fibrocollagenous tissue and calcifications. Similar to type I lesions, type II lesions harbor a hypointense rim on T2WI.