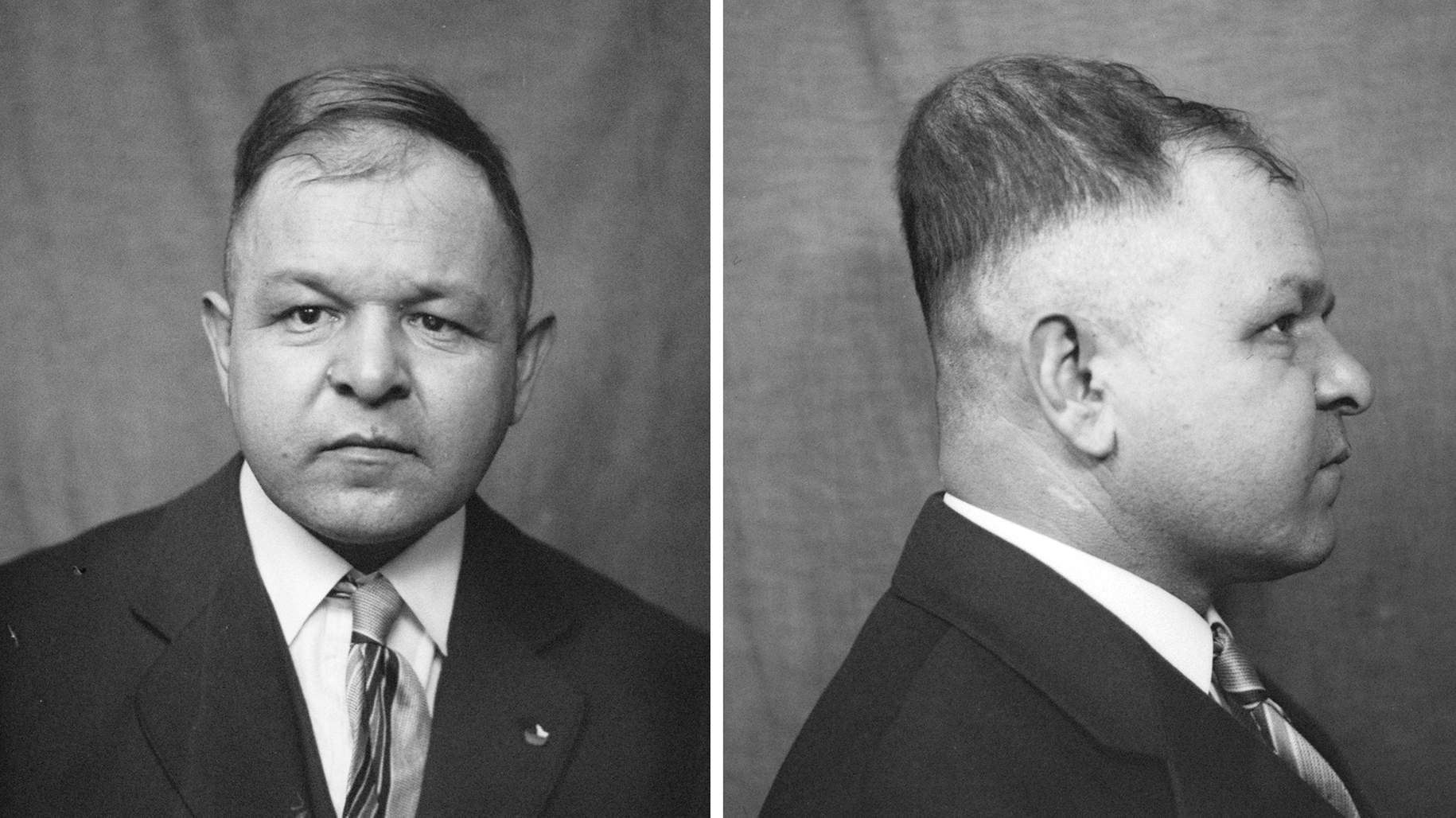 Figure 1: A patient of Harvey Cushing underwent resection of his giant hyperostotic parasagittal meningioma in 1930. Cushing often performed the operation for these highly vascular meninigomas in two stages with the first involving elevation of the bone flap and the second accomplishing tumor resection (Courtesy of Cushing Brain Tumor Registry at Yale University).

Parasagittal meningiomas originate from the parasagittal angle without brain tissue between the tumor and the superior sagittal sinus. Resection of parasagittal and convexity meningiomas is one of the more satisfying procedures in neurosurgery because these benign tumor types at these locations provide an ample opportunity for cure and relief of preoperative neurologic deficits.

Parasagittal meningiomas occur more frequently in areas with a higher density of arachnoid granulations; 15% of these tumors invade the dural sinus. In addition, a meningioma in this location may be associated with a higher incidence of atypical and malignant histologic subtypes.

The clinical presentation for parasagittal meningiomas depends on the location of these tumors along the sinus. Tumors near the central sulcus may cause sensory or motor seizures and contralateral hemiparesis/hemianesthesia. Accordingly, tumors at the anterior third may cause frontal lobe dysfunction and nonspecific signs such as dementia and papilledema. Those at the posterior third may cause visual disturbances such as homonymous hemianopsia. Additionally, large tumors can often present with headaches, vomiting and changes in sensorium.

Magnetic resonance imaging (MRI) allows diagnosis of an extra-axial parasagittal tumor with a dural tail. Computed tomography arteriogram/venogram (CTA) or magnetic resonance venogram (MRV) assesses the degree of dural sinus invasion or occlusion and estimates the location of vital large parasagittal bridging veins or their collaterals relative to the tumor. Digital subtraction angiography may be indicated for confirmation of sinus patency if CTA or MRV is nondeterminate, high-grade sinus obstruction is evident, and the blood flow in these vessels is slow.

Parenchymal edema often signifies pial invasion and correlates with neurologic deterioration after surgery. Parasagittal meningiomas may also cause noticeable hyperostosis; a computed tomography (CT) scan is important to delineate the extent of tumor-infiltrated calvarium as part of presurgical planning for extent of resection. 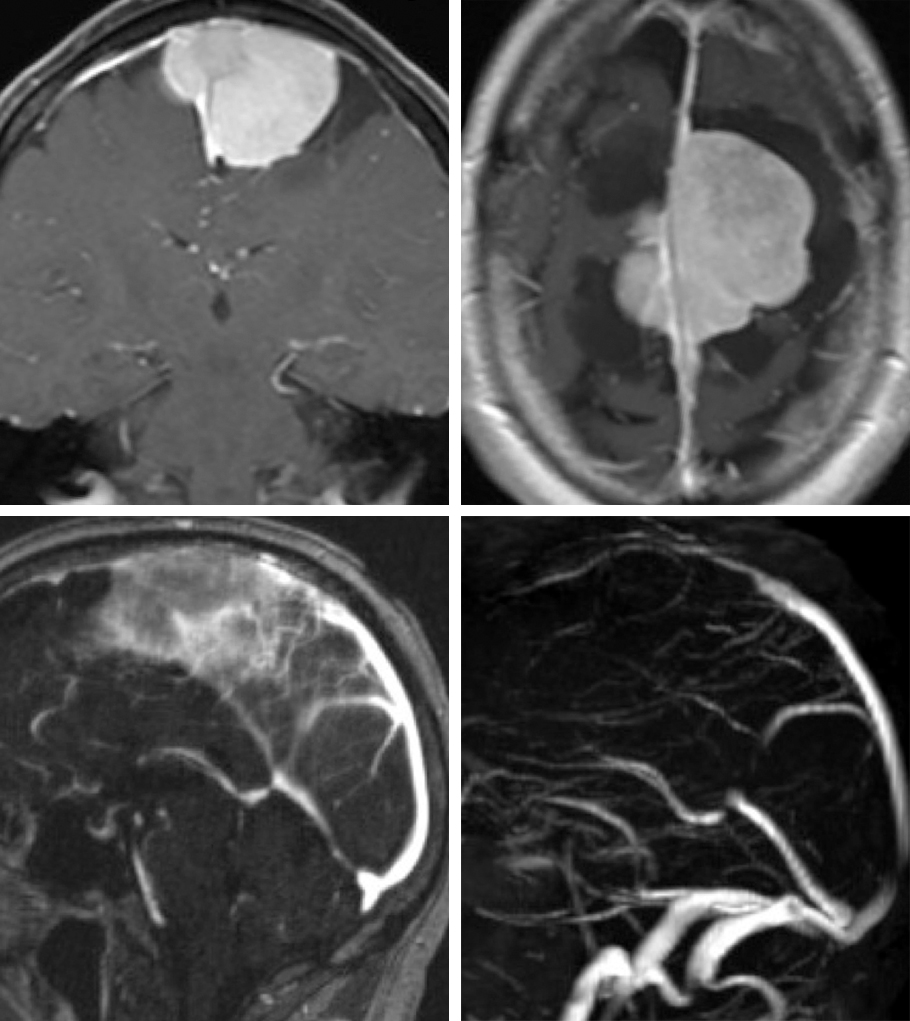 Figure 2: Classical parasagittal meningioma with questionable obstruction of the superior sagittal sinus (upper images). Further evaluation with an MRV demonstrates some flow within the sinus (right lower image). These tumors can invade both sides of the sinus and grow through the falx.

Other lesions found in the parasagittal location that mimic a parasagittal meningioma include lymphoma, hemangiopericytoma, metastases, and extramedullary hematopoiesis.

Patients with progressive symptoms or growing tumors are reasonable candidates for surgery. Small asymptomatic tumors can be observed. Tumors that affect critical bridging veins or the sinus and lead to partial obstruction may undergo subtotal removal and the tumor remnants treated with radiosurgery. If recurrence is evident, a conservative approach leads to slow tumor growth and development of proper collateral venous circulation during progressive sinus obstruction by the tumor. These changes subsequently allow safe gross total resection of the tumor and involved segment of the venous sinus.

Dural sinus stenosis or occlusion by the tumor may occasionally lead to venous hypertension and papilledema. Intrasinusal tumor resection and sinus reconstruction is associated with significant risks and not advised. Ventriculoperitoneal shunting may be considered in medically refractory cases.

A lumbar drain affords brain relaxation that minimizes brain retraction. Elective cortical resection should not be necessary. I have not encountered transtentorial herniation with judicious use of intraoperative lumbar drainage (gradual CSF drainage during and after dural opening; total 40-60cc in 10cc aliquots,) especially for giant meningiomas.

An occluded sinus is amenable to resection as the venous drainage channels of the hemispheres adapt to gradual closure of the sinus through development of venous collaterals. Preoperative CT can determine the need for synthetic bone flap construction (cranioplasty) following resection of the tumor-infiltrated calvarium. I do not advocate endovascular tumor embolization before surgery since the tumor can be readily devascularized early during dural opening and dissection.

Advances in radiosurgery have affected my philosophy regarding meningioma surgery. The goals of surgery, centered on patient safety, have evolved into favoring “radical” subtotal resection over aggressive “total” resection with venous sinus reconstruction in the case of partially occluded sinuses or involvement of important draining veins. Radiosurgery is also reserved for growth of tumor remnants on follow-up surveillance imaging.

The skin incision must be generous (horseshoe) and designed to cross the midline so that the infiltrated dura can be safely and liberally excised. The pericranium must be spared for dura reconstruction since the tumor-infiltrated dura is resected. Large collateralized diploic and scalp veins need to be protected, if possible, to avoid postoperative cerebral edema or venous infarction.

If significant hyperostosis is encountered and the inner table is adherent to the dura, aggressive elevation of a single large bone flap may lead to torrential bleeding and injury to the bridging veins or the sinus. It is safer to perform a step-wise craniectomy while securing hemostasis during gradual and controlled bone removal. The sinus should be exposed early during and protected. 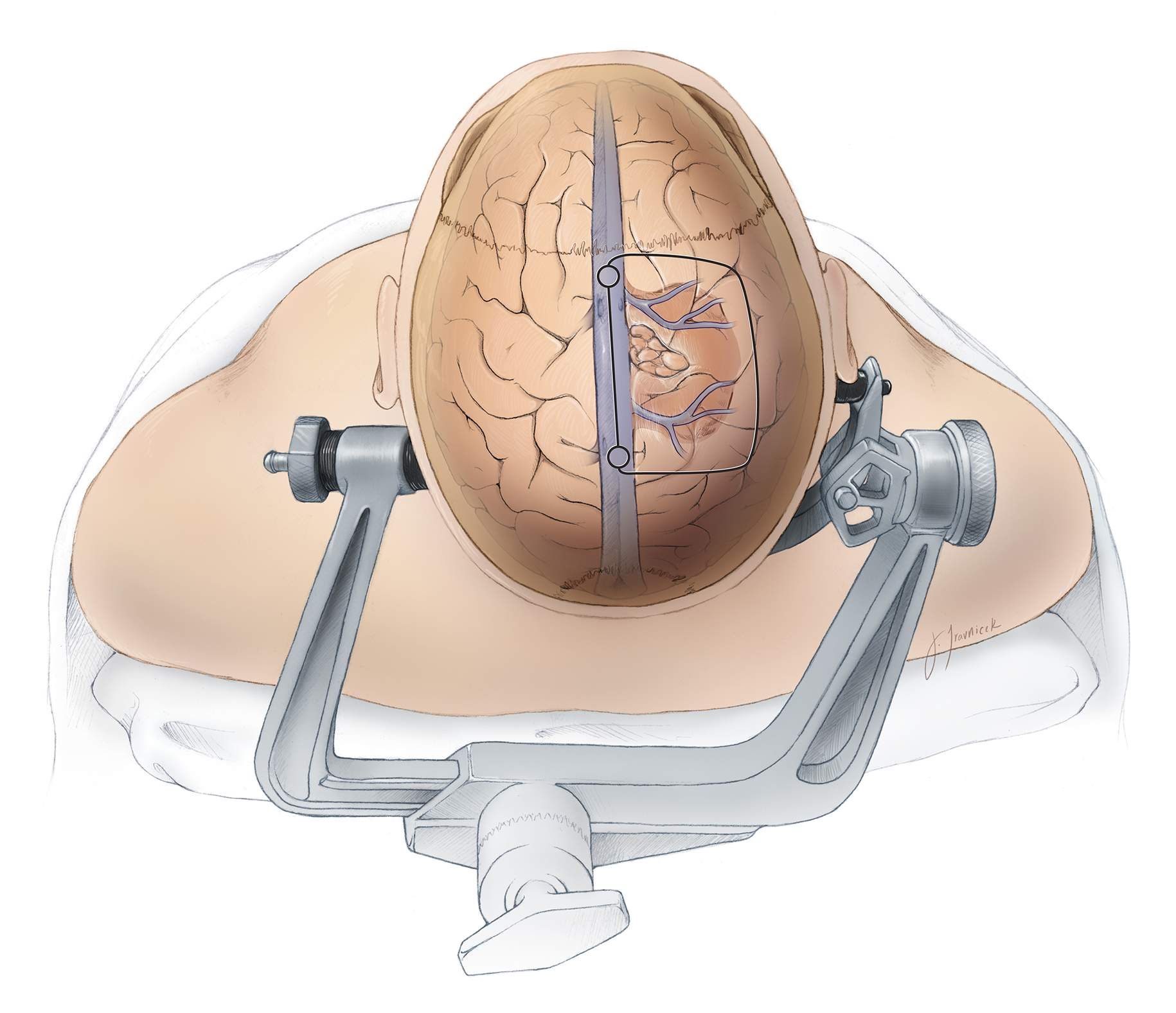 Figure 3: Typical location and features of a parasagittal meningioma in relation to the surrounding venous anatomy is depicted. Please note that a thin cap of normal brain typically hides the lateral pole of the tumor. The superior sagittal sinus is partially exposed to allow its gentle rotation during the dural opening. This maneuver exposes the base of the tumor along the parasagittal angle. Wide craniotomy and dural opening are imperative for gross total resection of the dural tails.

Coagulation of the epidural space leads to early partial tumor devascularization. The peripheral dura is tacked up to the edges of the craniotomy. 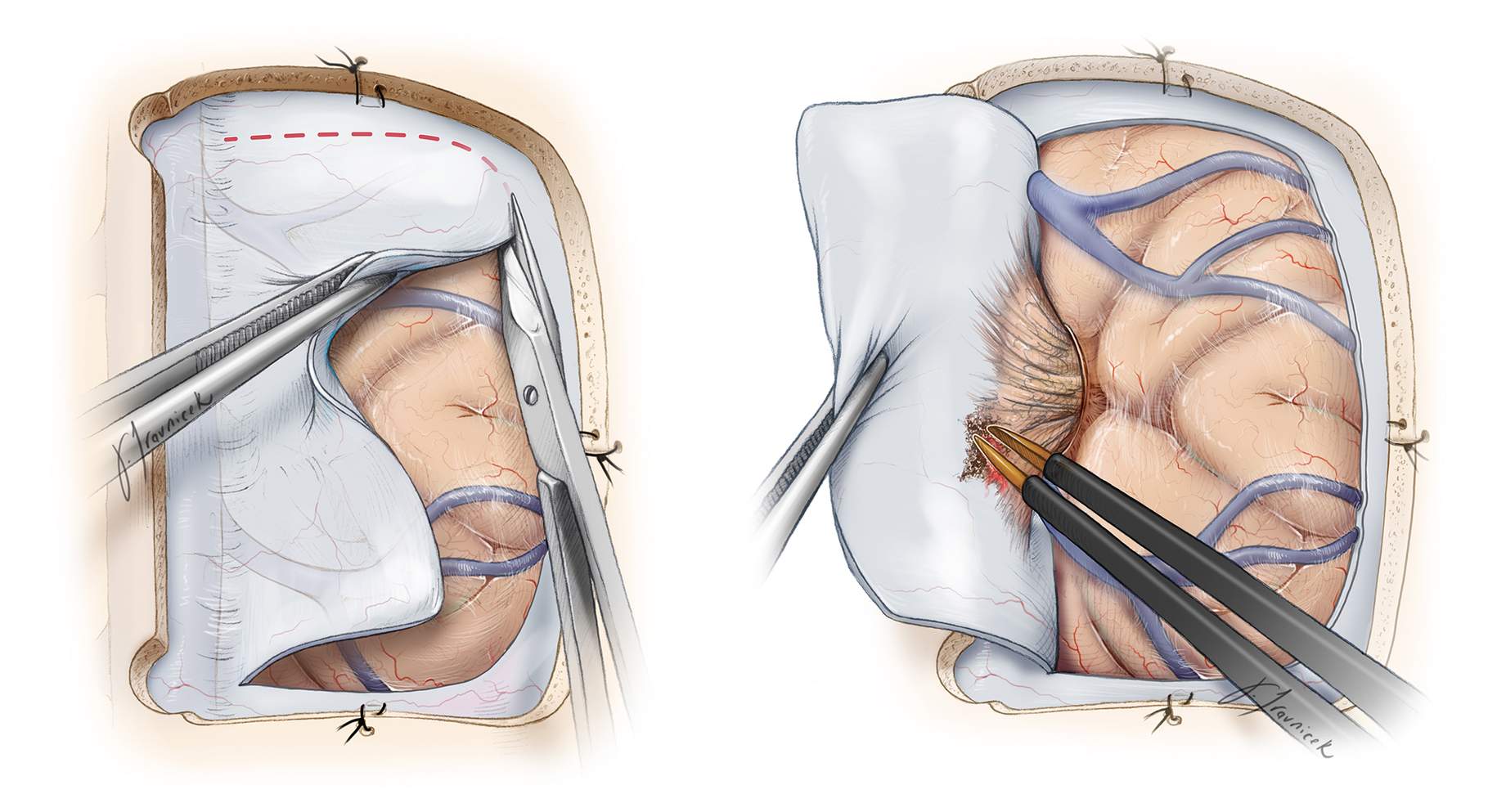 Figure 4: I open the dura in a curvilinear fashion and create a dural flap based on the venous sinus. Care is taken not to injure any large draining veins, especially in the perirolandic region. Occasionally a small draining vein may need to be sacrificed. The first incision within the dura is made away from the superior sagittal sinus (left image); this tactic allows early identification of the cortical veins and reliable tracing of their midline drainage patterns.

If a parasagittal vein is encountered draining into the sinus, the dural opening must be adjusted to protect the vein’s inlet into the sinus. The dural base of the tumor is coagulated early on for tumor devascularization (right image). 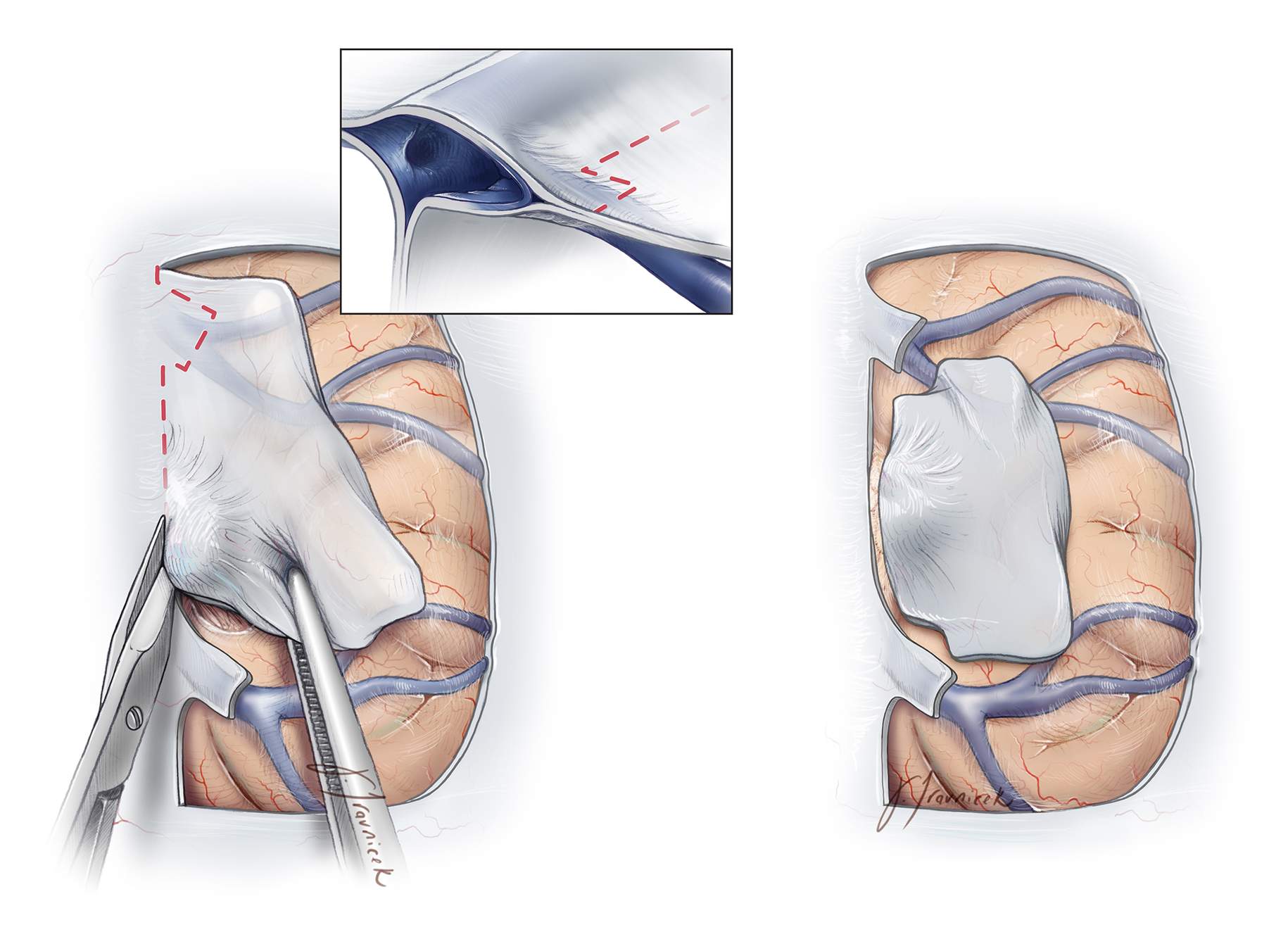 Figure 5: The most proximal segments of the bridging veins may form venous lakes within the leaflets of the parasagittal dura and should be preserved (left image). This necessitates judicious dura incisions in order to maintain the integrity of venous drainage (left image, inset). The tumor-infiltrated dura is sectioned along and parallel to the sinus while leaving the dura over the veins intact (right image).

If the sinus is completely occluded, a nonabsorbable suture is passed through the falx just beneath the sinus and tied; this maneuver can tie off the sinus proximal and distal to the tumor. The venous sinus and the falx are then divided at the anterior and posterior limits of the tumor and removed with the tumor en bloc. If a large draining vein is draped over the tumor, it should be meticulously dissected microsurgically; otherwise it should be preserved while leaving a small piece of tumor over the vein. The integrity of the veins can be confirmed using intraoperative fluorescence angiography. 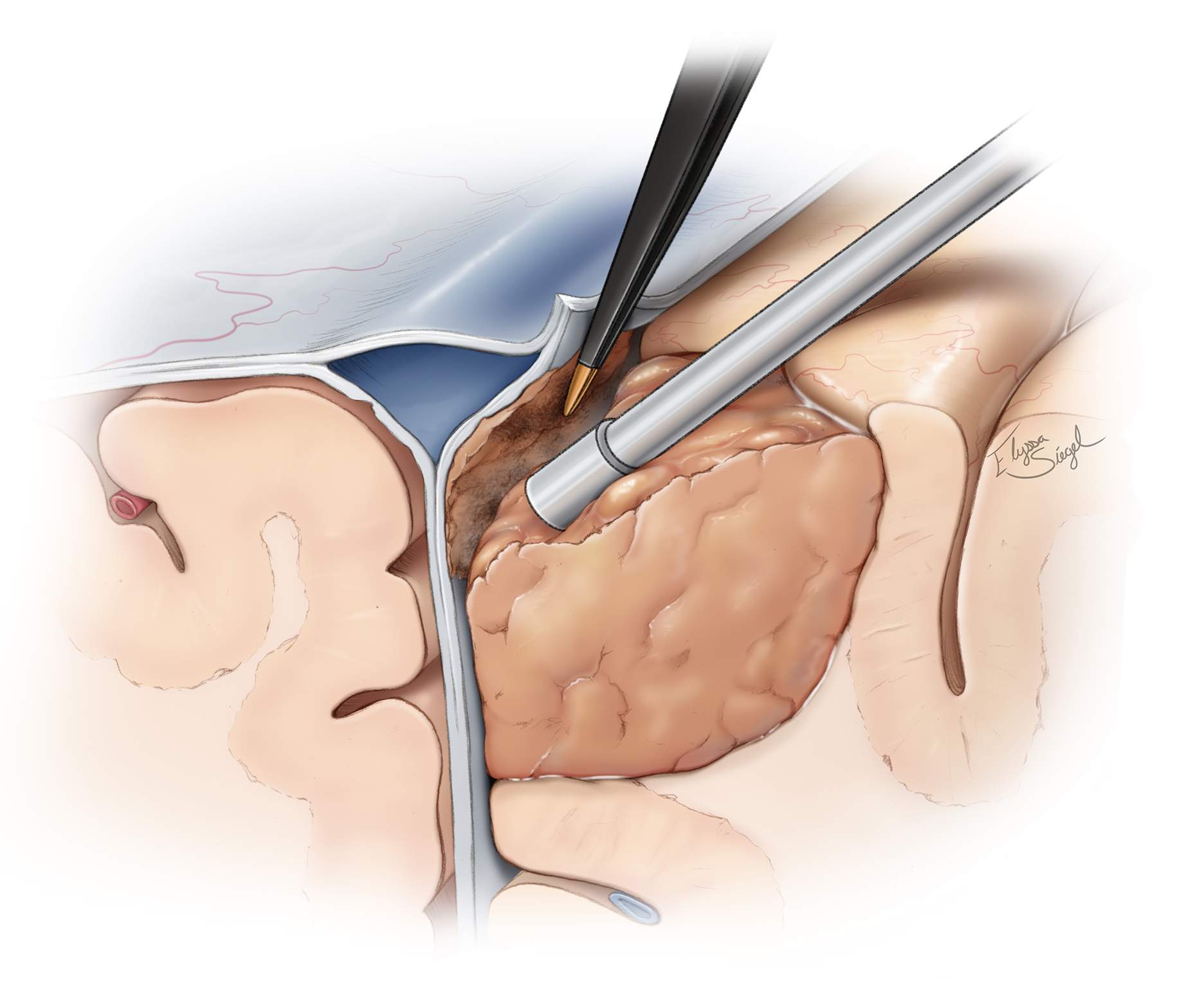 Figure 6: The parasagittal dura may not always be resectable due to the presence of bridging veins. In these instances, the tumor is devascularized along the parasagittal angle. The infiltrated sinus wall or intrasinusal tumor is left undisturbed to avoid the attended risks of venous infarction. 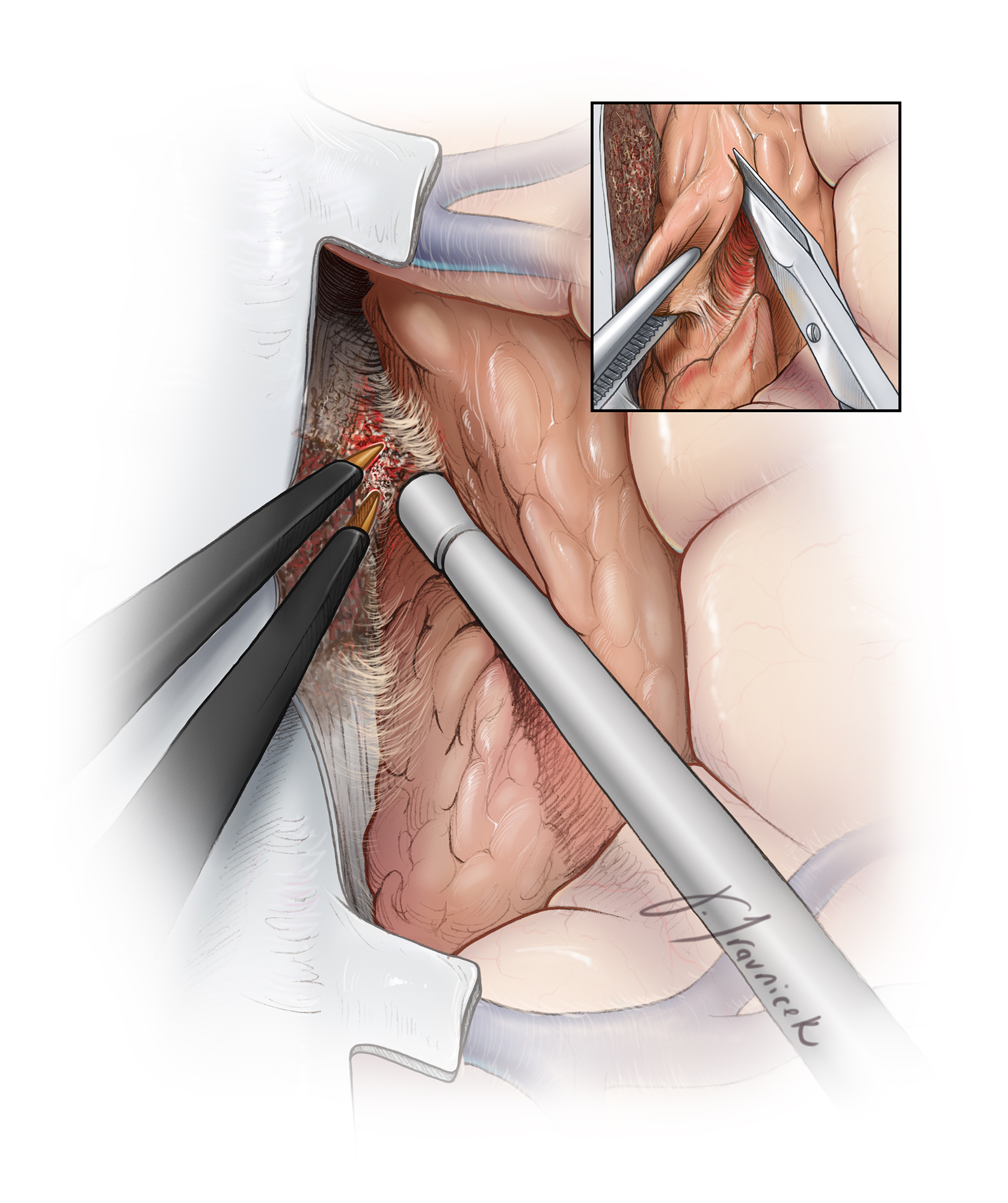 Figure 7: It is important to adhere to the principles of meningioma surgery: perform tumor devascularization before tumor debulking or dissection, when possible. For a parasagittal meninigoma, the tumor is first devascularized along the wall of the sinus and falx.

The tumor is then enucleated by sharply cutting away tumor from inside out (inset). Alternatively, an ultrasonic aspirator may be used. Next, the tumor capsule can be pulled into the enucleation cavity along the extrapial dissection planes. 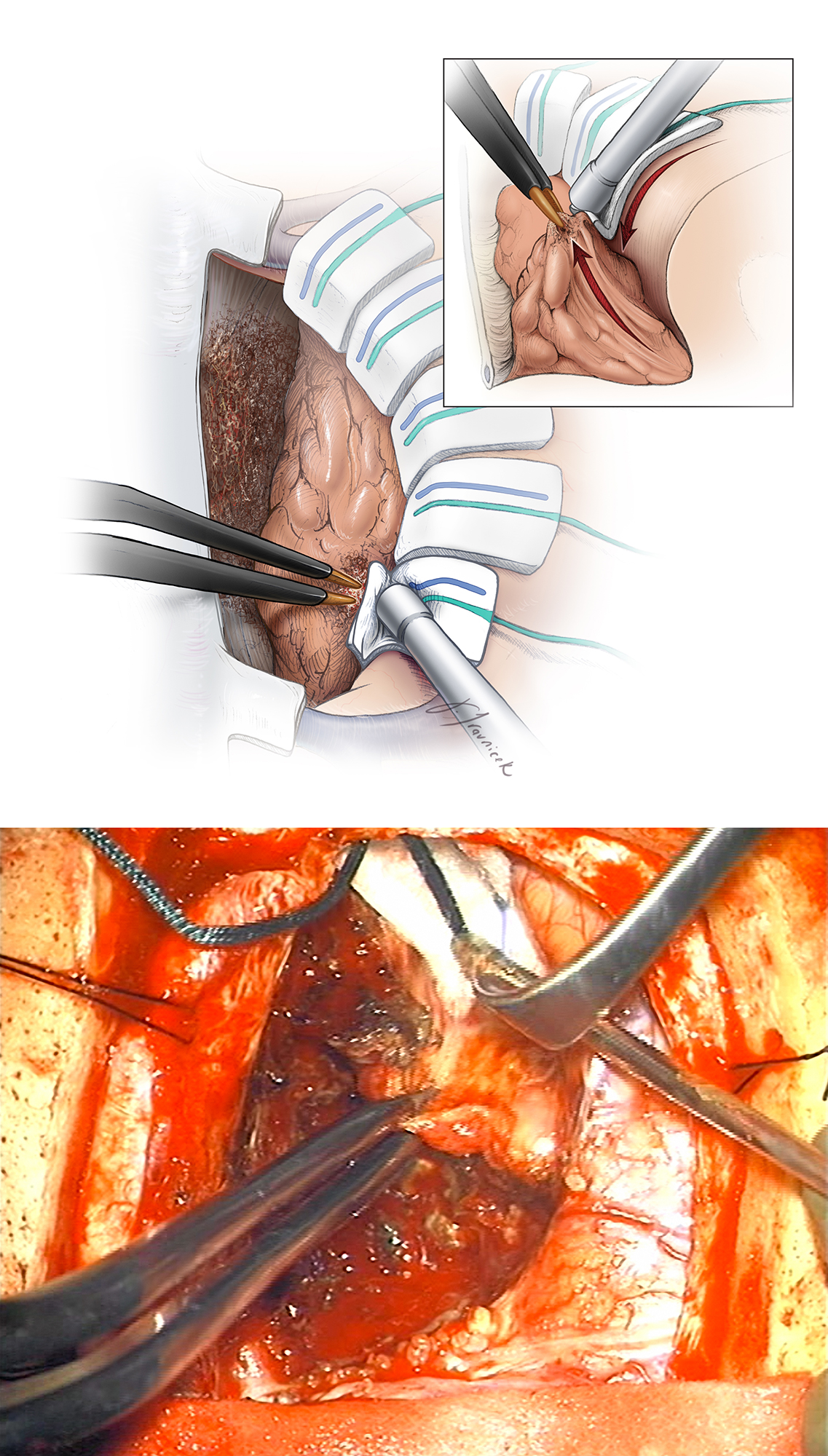 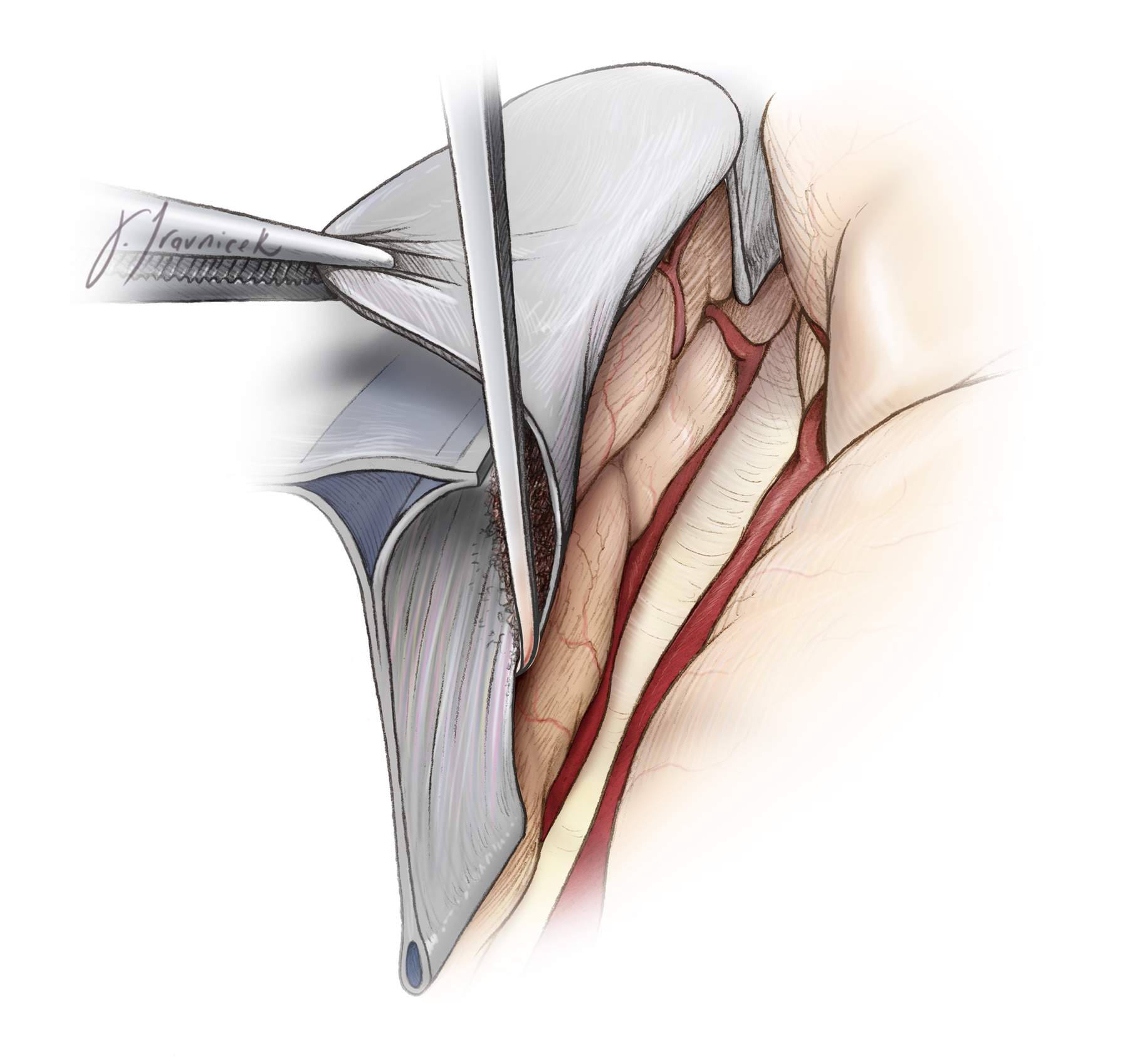 Figure 9: Although parasagittal tumors are often centered over the wall of the sinus, they infiltrate the falx to a variable degree. The affected section of the falx may be removed as shown. Callosomarginal and pericallosal arteries often are adherent or provide tributaries to the tumor and should be searched for and preserved while the inferior pole of the tumor is mobilized.

Premature traction on the inferior pole of the tumor without adequate inspection can lead to vascular avulsion injury and disappointing results. Finally, the resection cavity and dural edges are inspected for residual tumor.

The previously harvested pericranial graft may be sutured in place where the dura was resected. In the case of calvarial hyperostosis, the tumor-infiltrated bone flap is not replaced and a cranioplasty may be performed using titanium plates, methylmethacrylate or a prefabricated synthetic plate. Tack-up stiches are used to prevent formation of epidural hematoma or fluid collections.

The patient is observed in the intensive care unit overnight for frequent neurologic evaluations and control of pain and blood pressure. A postoperative MRI is obtained. Steroids may be slowly weaned as tolerated. Prophylactic anticonvulsants are administered perioperatively, but tapered off one week after surgery if the patient has not suffered from a seizure.

Figure 10: In the case of highly hyperostotic tumors, multiple burr holes may be placed along the periphery of the tumor on the calvarium (left image). Bleeding from the bone is carefully controlled with bone wax and ultimately, the burr holes are connected and the bone gently disconnected from the transdural tumor. Alternatively, dissection of the tumor away from the brain can be accomplished through the bony defects created by the burr holes and the small tumors removed en bloc along with the affected dura and bone (middle image). The connection of the tumor across the dura to the bone is evident (right image).

This patient presented with mild altered mental status and a growing mass in the frontal region for the past few years.

Figure 11: MR imaging demonstrated a transosseous parasagittal meningioma with significant parenchymal edema. In this case, the calverium, dura and the intradural space were affected by the tumor. The extracranial tumor was exposed upon scalp reflection (second row). Multiple burr holes were gradually placed in the periphery of the tumor so that osseous bleeding is controlled in a timely fashion (third row). The dura was incised circumferentially within the connected burr holes and the majority of the tumor was removed en bloc (last row). The intradural portion of the tumor that was adherent to the pia was resected in a second step.

Growing tumors within the dural venous sinus (intrasinusal tumors) may undergo resection of the affected/occluded segment of the sinus.