Resection of a Hypothalamic Hamartoma via the Supraorbital Craniotomy

A hamartoma is a benign, noncancerous growth consisting of an abnormal mixture of native tissue. Although this tumor-like lesion resembles a neoplasm, it does not exhibit neoplastic tendencies such as accelerated growth, local invasion of surrounding tissues, or metastatic spread.

Hypothalamic hamartomas are exceedingly rare developmental anomalies classically associated with endocrine abnormalities and epilepsy. They consist of a mixture of hyperactive neuronal and glial cells arising from the floor of the third ventricle.

Their true incidence is unknown, but is estimated at one in 50,000 to one in one million. Although classically associated with gelastic seizures, hypothalamic hamartomas are also responsible for several other types of more debilitating medically refractory seizures. Endocrine abnormalities, including central precocious puberty, have also been implicated.

Behavioral, psychiatric, and cognitive impairments appear to have a higher incidence in this patient population as well. In their extreme form, hypothalamic hamartomas lead to disabling epilepsy, severe cognitive deficits, and developmental delay in early childhood.

A patient with a hypothalamic hamartoma may present with signs and symptoms of precocious puberty and/or seizures. Gelastic seizures, spells of uncontrollable laughter, were first reported in the 19th century and are considered a hallmark clinical finding.

The laughing events are typically first noted in early childhood, and may progress to include other seizure types, including generalized tonic-clonic seizures, partial complex seizures, drop attacks, and atypical absences. As stated before, behavioral, psychiatric, and cognitive changes may also be present. Additionally, gelastic seizures have been reported in the absence of any obvious imaging finding and thus cannot be considered a pathognomonic feature.

Depending on the individual patient’s presentation, the diagnostic workup often includes a full spectrum of labs, electroencephalogram (EEG), and magnetic resonance (MR) imaging. 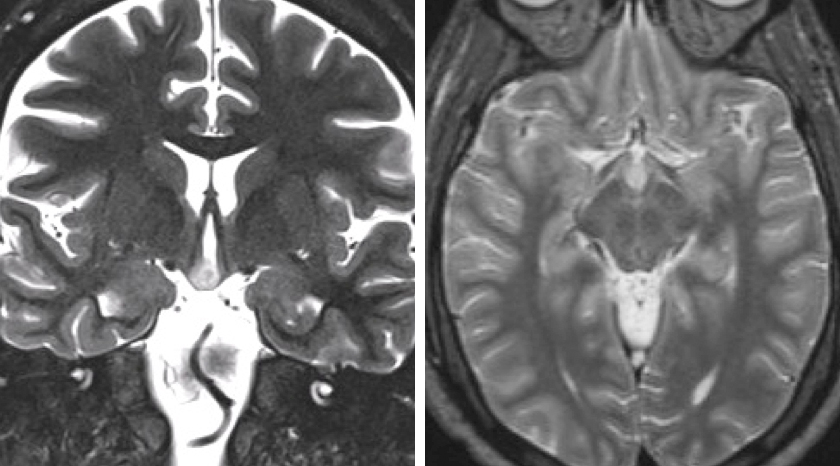 Evidence-based management algorithms are difficult to establish for such rare lesions. In general, surgical indications include seizures intractable to maximal medical therapy. Precocious puberty is another indication for intervention that leads to regression of preoperative symptoms and signs.

Various surgical approaches to the anterior third ventricle have been described in the literature, including standard pterional, transcallosal, endoscopic transventricular, endoscopic endonasal, and subfrontal translamina terminalis. A standard pterional approach is familiar to neurosurgeons and offers a relatively direct route to the lesion. However, visualization of the anterior third ventricle is limited by the critical overlying neurovascular structures with this approach. Thus, significant retraction and manipulation of the normal anatomy may be needed to conduct the resection.

A transcallosal approach provides a direct vertical route to the anterior third ventricle and clear visualization of the intraventricular aspects of the lesion. Limitations of this approach include the risks of memory disturbance from forniceal manipulation.

Endoscopic endonasal access has great potential for providing a minimally disruptive option to this lesion, but the experience for the use of this route is limited.

I favor the subfrontal translamina terminalis approach through a supraorbital craniotomy. Some degree of frontal lobe retraction is necessary to reach the lesion via a superior-to-inferior operative trajectory toward the floor of the third ventricle. Additionally, a contralateral subfrontal pathway creates a more direct surgical corridor to the lateral pole of the mass.

Radiosurgery is a viable consideration for the treatment of hypothalamic hamartomas. The potential limitations of radiotherapy include a delayed response to treatment and the risk of radiation injury to the hypothalamus and optic apparatus; these factors limit radiotherapeutic dosing and, in turn, can limit treatment effectiveness.

Knowledge of the anatomy of the lamina terminalis and the floor of the third ventricle is essential for safe and effective removal of these lesions. Please refer to the Subfrontal Translamina Terminalis Approach chapter for further details.

Embryologically, lamina terminalis represents the most rostral end of the developing neural tube. This structure represents the widest region of the third ventricle and attaches at an acute angle to the midportion of the optic chiasm, forming the optic recess posteriorly. Anterior to the lamina is its cistern, part of the suprachiasmatic cistern which contains the A1 segments of the anterior cerebral arteries, anterior communicating artery, recurrent arteries of Heubner, frontoorbital arteries, hypothalamic perforators, proximal A2 segments, anterior communicating vein, and the anterior cerebral vein. 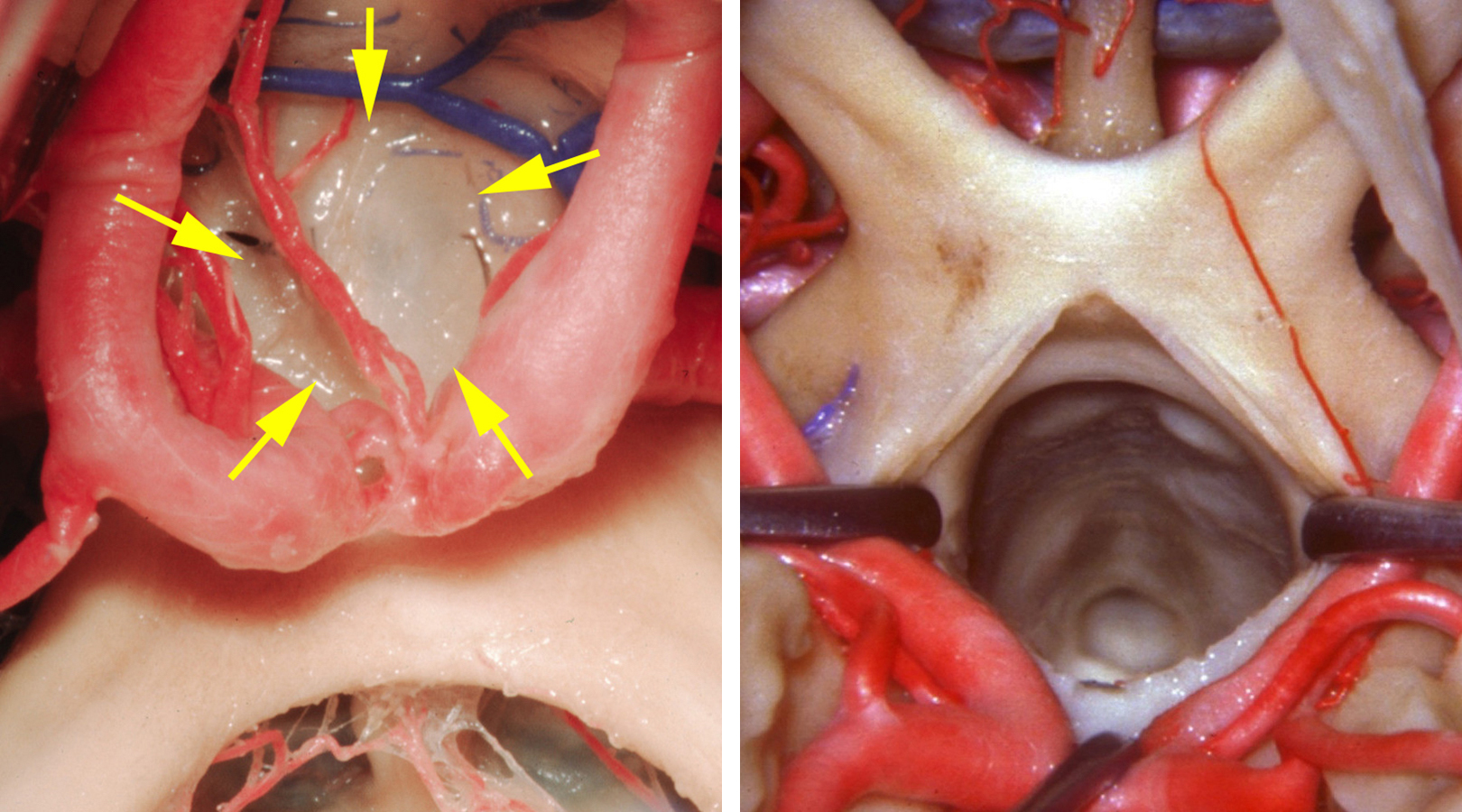 Preoperative lumbar puncture or placement of a lumbar drain affords brain relaxation, thus minimizing the need for brain retraction regardless of the approach. Intraoperative image guidance is a useful adjunct, especially for smaller lesions.

Please refer to the Supraorbital Craniotomy chapter for more details regarding the initial steps of the operation and exposure. The patient is positioned supine and the neck is slightly extended so that the frontal lobes are mobilized away from the skull base under the influence of gravity. A two-thirds bicoronal or soutar incision is performed; a pericranial flap is elevated, which may be used later if the frontal sinus is entered.

The eyebrow incision provides restricted access to the floor of the third ventricle due to the limited vertical reach of the craniotomy. 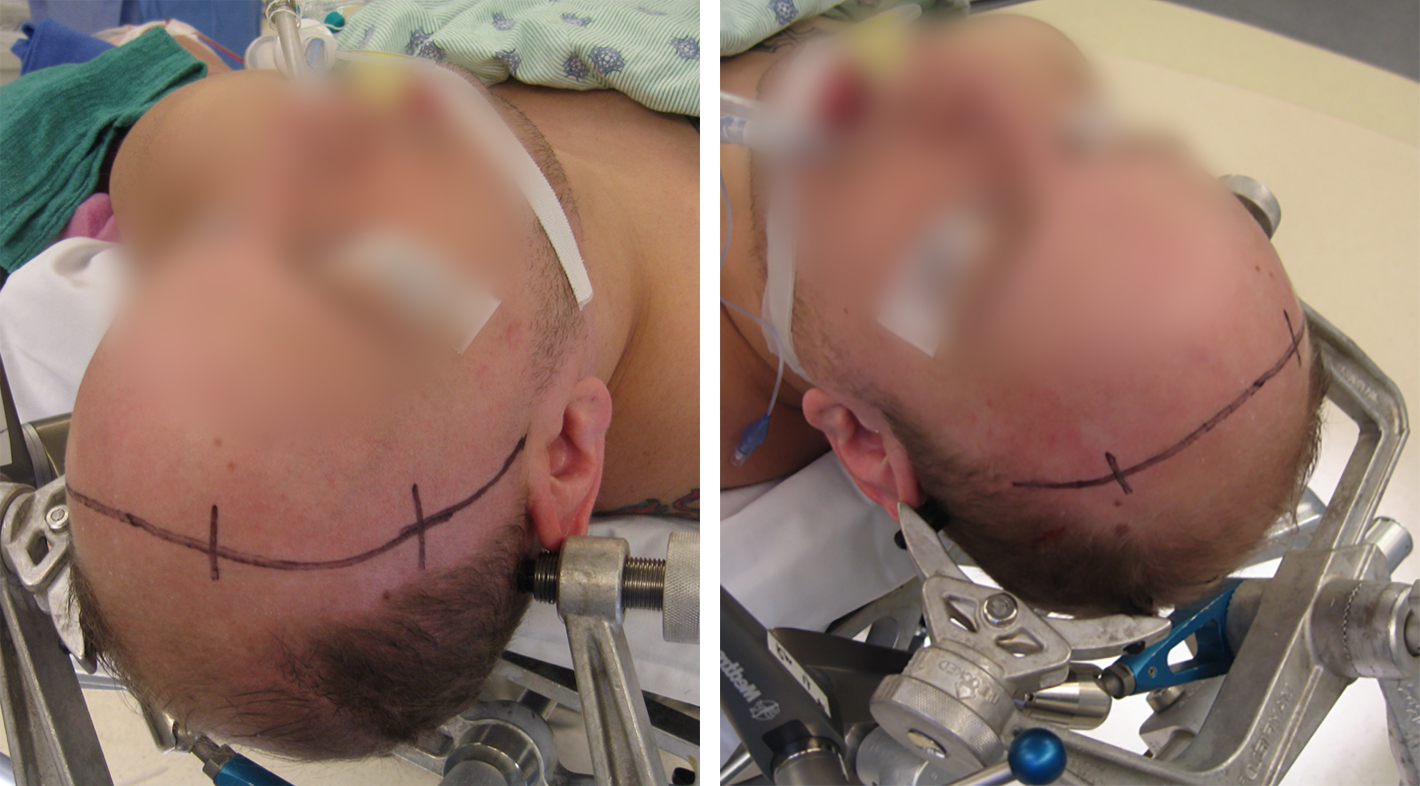 Figure 3: The patient is positioned supine with the head turned only 10 to 15 degrees away from the midline. The neck is extended slightly to allow the frontal lobes to fall away from the anterior skull base floor.

The surgeon performs a unilateral supraorbital craniotomy while avoiding the frontal sinus, if possible. As mentioned before, the craniotomy is contralateral to the laterality of the mass to allow a “cross-court” direct visualization of the lateral pole of the lesion. The dura is then incised in a “reverse-U” pattern and based anteriorly. 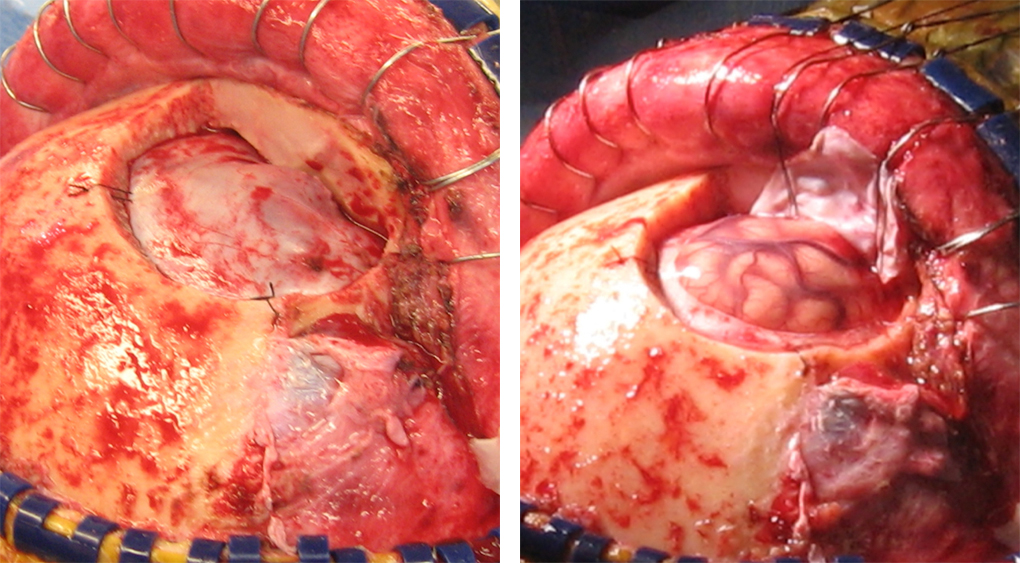 Figure 4: I do not remove the orbital rim for approaching a hypothalamic hamartoma because the operative trajectory is in the superior-to-inferior direction when I reach the third ventricular chamber. 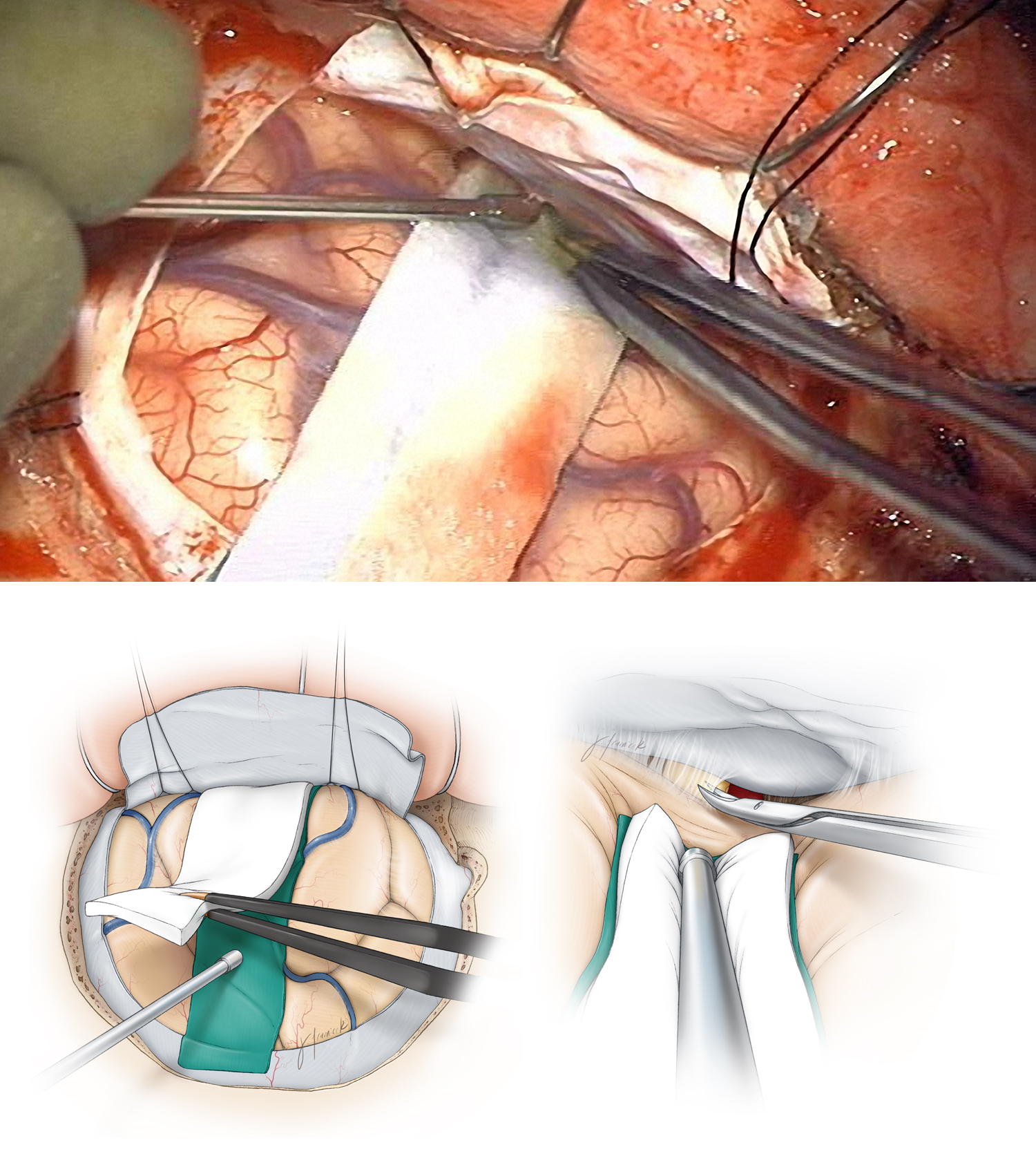 Figure 5: A right-sided supraorbital trajectory is shown. The inferior edge of the craniotomy is reduced to the level of the orbital roof. I use a piece of rubber glove (cut in the shape of a cotton patty) to slide the patty underneath the basal frontal lobe. Gentle elevation of the lobe exposes the ipsilateral optic nerve.

Figure 6: Continued gentle mobilization of the frontal lobe using dynamic retraction allows additional CSF release from the opticocarotid cisterns. The optic nerve is then followed posteriorly to the chiasm. The basal frontal lobe is released from the entire anterior optic apparatus and the anterior cerebral arteries are identified.

The lamina terminalis forms part of the anterior wall of the third ventricle and is attached to the superior optic chiasm. This relationship creates the optic recess within the third ventricle and the lamina terminalis recess in the suprachiasmatic space notable for its relationship to the A1 segment and the anterior communicating artery complex, as well as the key perforating arteries, including the recurrent artery of Huebner. 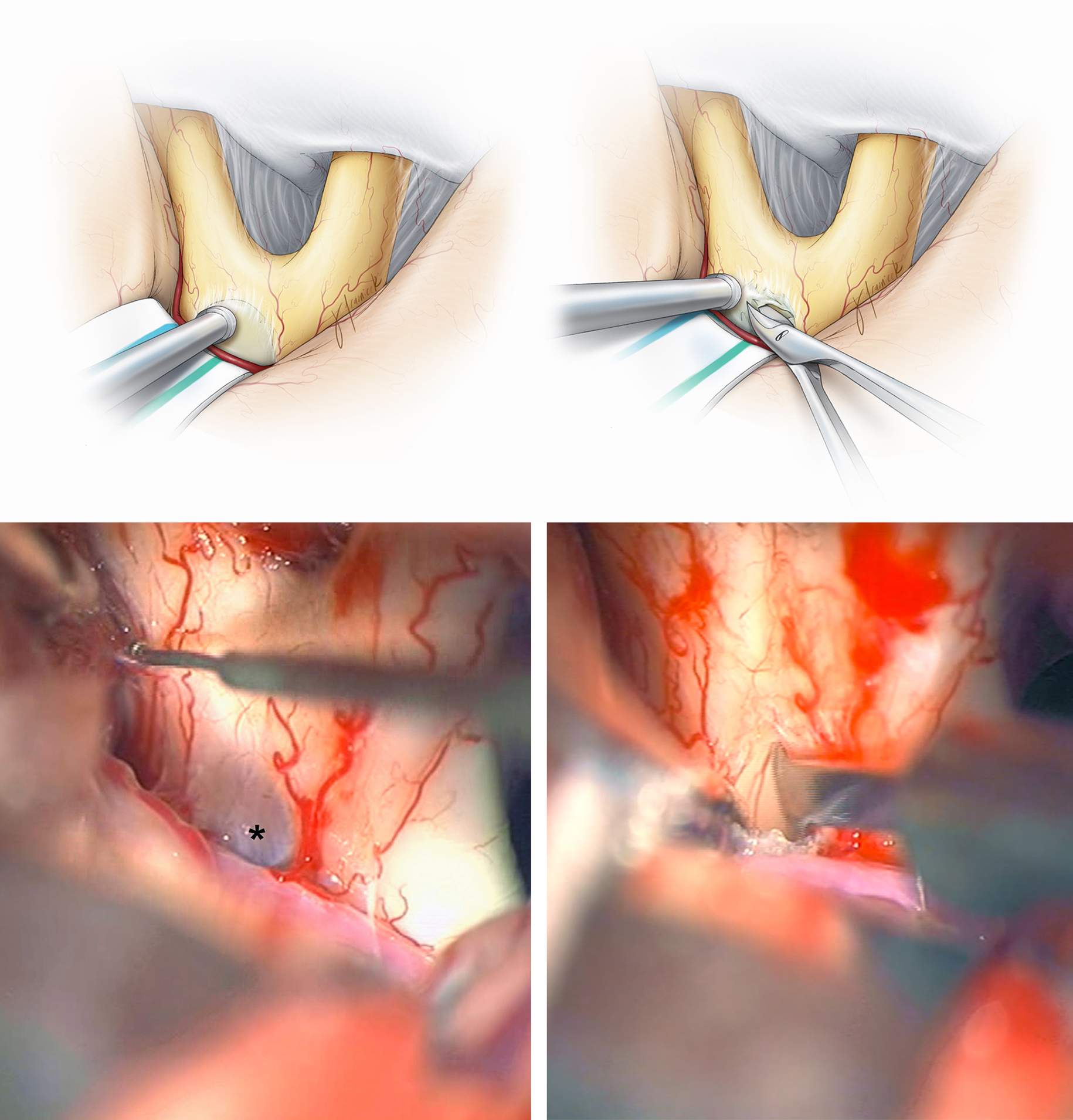 Figure 7: The exposure of the lamina terminalis and the anterior cerebral artery is shown (the images in the left column). The lamina is thin and relatively transparent, features that differentiate it from the rest of the chiasm. An incision in the lamina terminalis reveals the floor of the anterior third ventricle and the lesion (images of the right column). The perforating arteries arising from the anterior communicating artery complex and supplying the superior chiasm are preserved. Coagulation is kept to a minimum.

Figure 8: The working space is deep and dynamic retraction provides limited views of the operative target. I use an arachnoid knife to expand the initial crucial incision in the lamina terminalis. This instrument allows adequate visualization around its tip to avoid blind maneuvers that may lead to inadvertent injury to the surrounding vital structures. Next, the operative view is directed inferiorly toward the floor of the third ventricle. This superior-to-inferior trajectory around the lamina terminalis requires strategic dynamic mobilization of the frontal lobe to avoid subfrontal injury. The operative maneuvers must be conducted deliberately and efficiently without uninterrupted excessive retraction on the lobe. The dynamic force of the suction device exerts only periodic retraction on the subfrontal area during key maneuvers for removal of the mass. 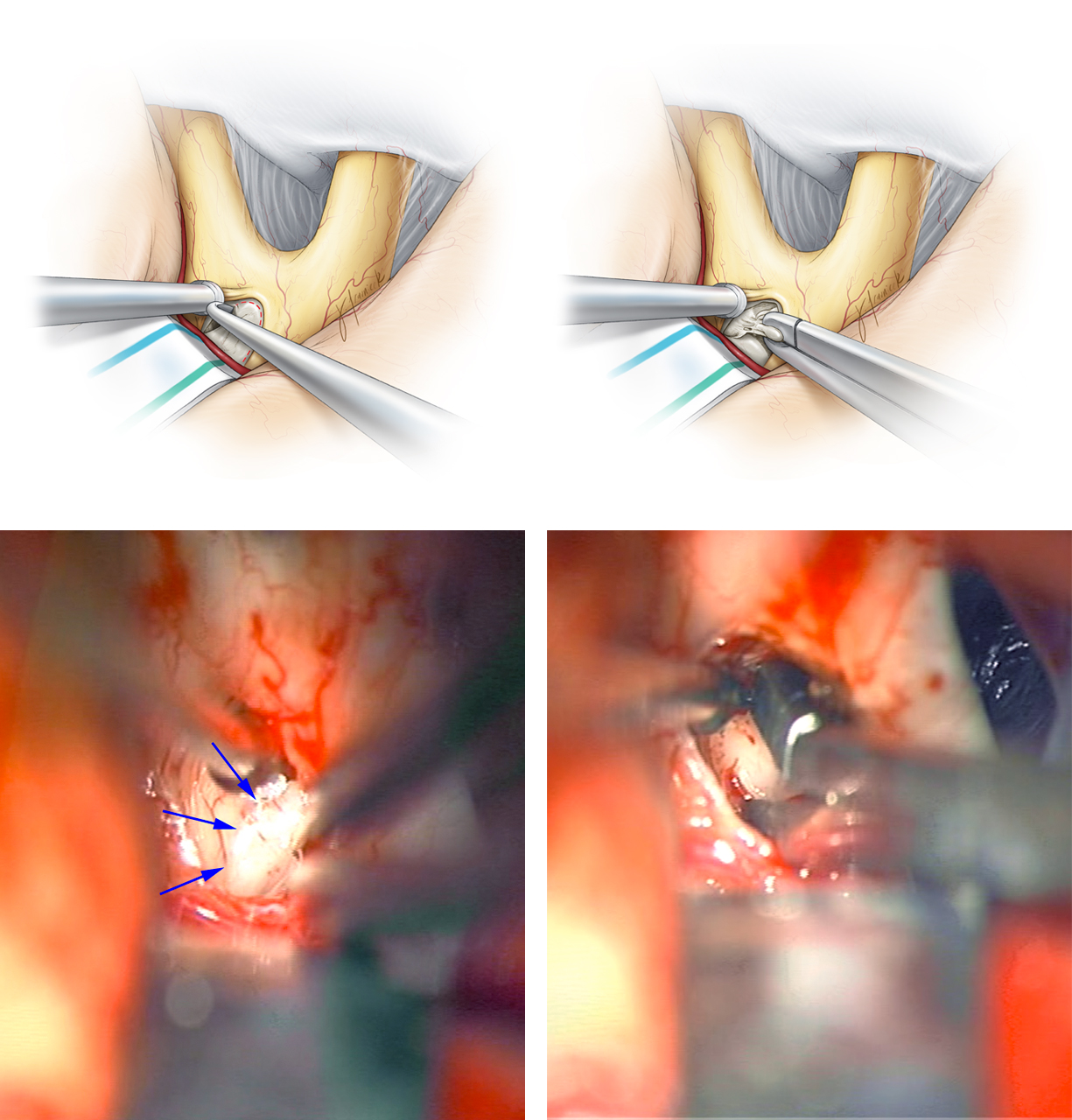 Figure 9: Next, the rubbery and grayish hamartoma is slowly separated and carefully removed from the relatively normal walls of the hypothalamus using angled dissectors. The perilesional area is left behind and only the obviously abnormal tissue is disconnected. Pituitary rongeurs facilitate piecemeal evacuation of the mass. The borders of the mass are marked with blue arrows in the left lower photograph. 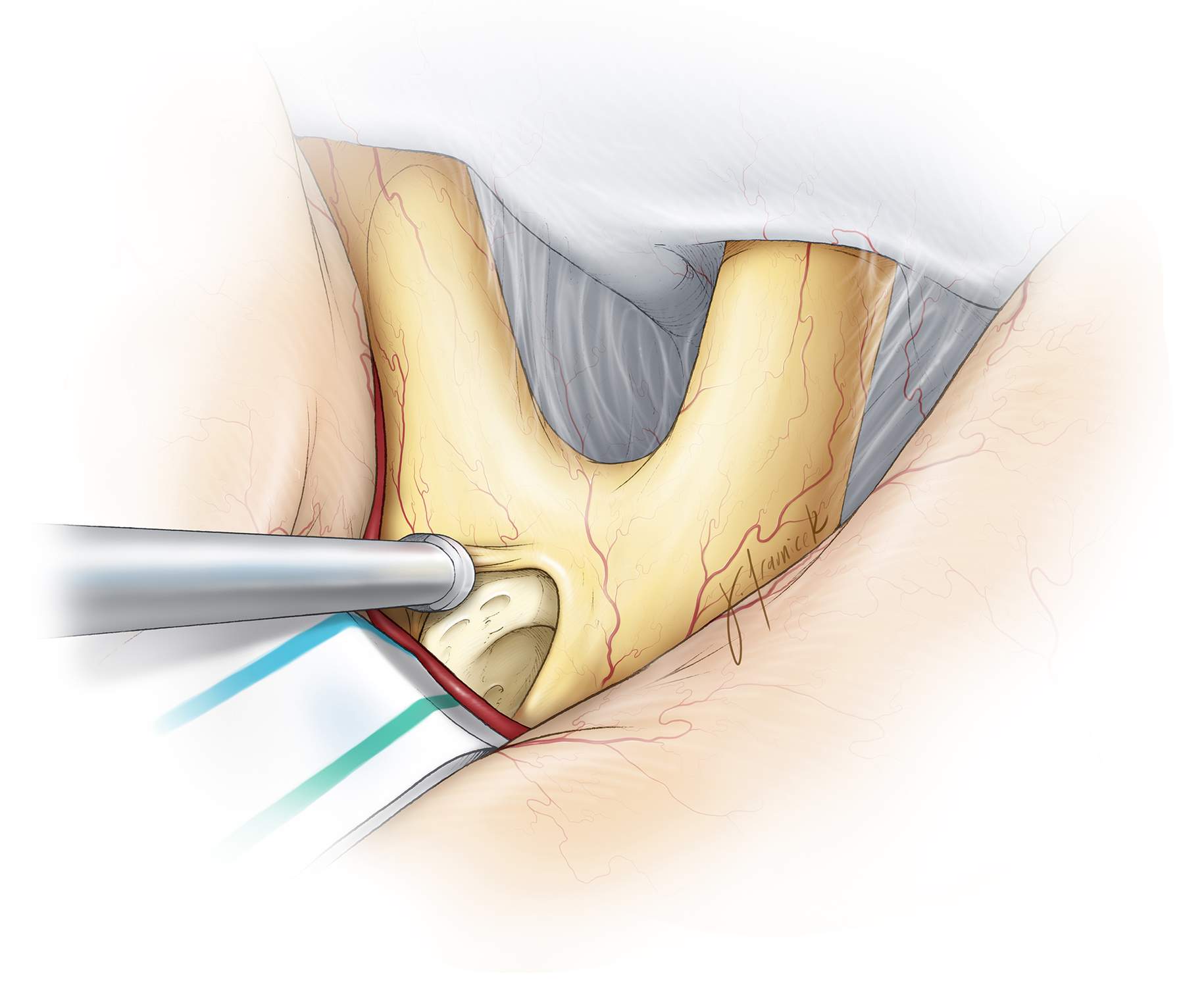 Figure 10: At the end of resection, the hamartoma-hypothalamic interface is left untouched. Aggressive resection is not advised.

Closure is conducted in standard fashion. If the frontal sinus was entered, it will be exenterated.

The patient is admitted postoperatively to the intensive care unit for continuous vital sign monitoring, blood pressure control, and hourly neurologic examinations. Frequent lab draws are obtained for close monitoring of the electrolyte and endocrine status. Postoperative MR imaging is usually obtained within the first 48 hours. Supratherapeutic levels of anticonvulsant medications are advised because the risk of perioperative seizures is significant.