Anterior clinoidectomy is an important tool for neurovascular and skull base surgery. This technique is cardinal in expanding access to the sella, proximal carotid artery, and central skull base. The goal of anterior clinoidectomy is to the reveal the more proximal ophthalmic and clinoidal segments of the internal carotid artery (ICA) while unroofing the optic canal and skeletonizing the proximal optic nerve. This maneuver expands the optico-carotid and carotid-oculomotor access windows and therefore the operative corridor to the interpeduncular cisterns. Both the carotid artery and optic nerve are partially untethered and can be more safely and gently mobilized.

Controversy surrounds the value of clinoidectomy for “appropriately selected” cases. Moreover, there is no consensus on the indications and benefits of extradural versus intradural clinoidectomy. Many reports of modified variations of clinoidectomy have complicated the technical complexity of this osteotomy and have further dampened some of my colleagues’ enthusiasm for adopting this technique. This chapter aims to clarify and simplify the appropriate indications for clinoidectomy.

The indications and advantages of extradural clinoidectomy are:

The indications and advantages of intradural clinoidectomy are:

Ultimately, surgeon’s preference and comfort level dictates “which side of the dura” is entered to execute anterior clinoidectomy. I prefer the extradural approach due to my experience level with this procedure. I also prefer to avoid drilling within the intradural space if at all possible to minimize the risk of injury to the neighboring structures.

Note that intradural clinoidectomy can be tailored and not all the steps mentioned below are mandatory. Initial intradural inspection of the lesion dictates the need for the extent of clinoid osteotomy.

The extent of clinoid aeration (pneumatized clinoid) may be evaluated on preoperative CT scan and predicts the need for more robust plugging of the bony defect after clinoidectomy to avoid a CSF fistula. Thin-slice CT also determines the ossification of the clinoidal ligaments, specially the carticoclinoid and interclinoid ligaments. For further details on the anatomical variations of the anterior clinoid process, please refer to the Extradural Clinoidectomy chapter.

In the case of proximal paraclinoid aneurysms, control over the ICA must be established via neck dissection and the neck area is prepared, especially in the case of ruptured aneurysms.

Extension of the aneurysm neck proximal to the distal dural ring should be assessed on a preoperative CT angiogram. Although following clinoidectomy, opening of the outer dural ring provides access to additional few millimeters of aneurysm neck, significant extension of certain paraclinoid aneurysm necks into the cavernous sinus precludes the use of an open microsurgical route for clip ligation. 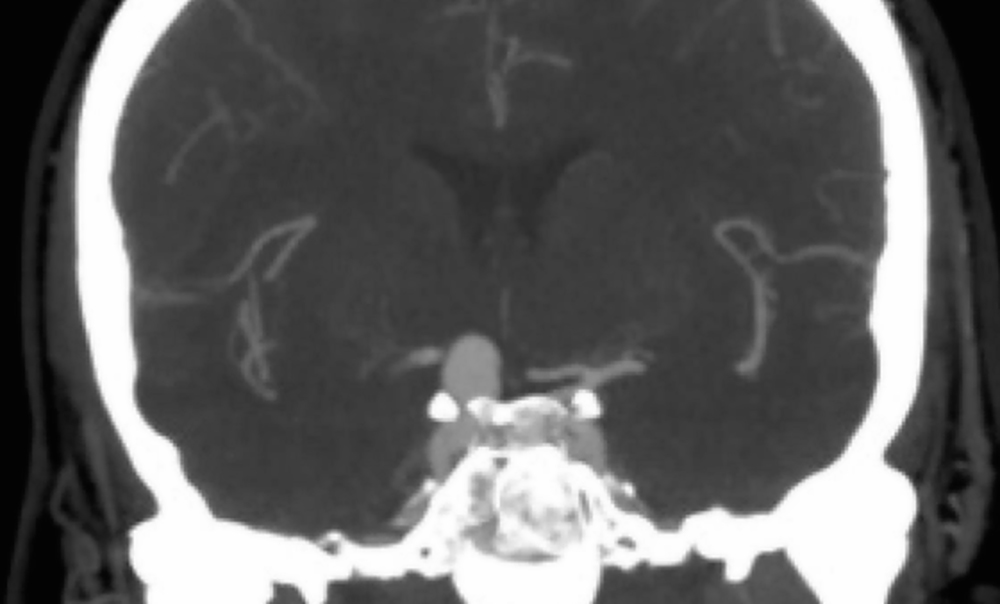 Figure 1: The neck of this aneurysm was partially concealed by the clinoid process. An intradural clinoidectomy was subsequently performed to disclose the neck of the aneurysm for clip application. Please refer to the images below.

The frontotemporal dura defines the superior and lateral borders to the clinoid while the periorbita and optic strut limit the anterior and inferior borders. The clinoid segment of the internal carotid artery (ICA) provides the posterior limit inferomedially. Inferolaterally, the neurovascular structures of the cavernous sinus lie under a layer of periosteal dura emerging anteriorly into the superior orbital fissure. 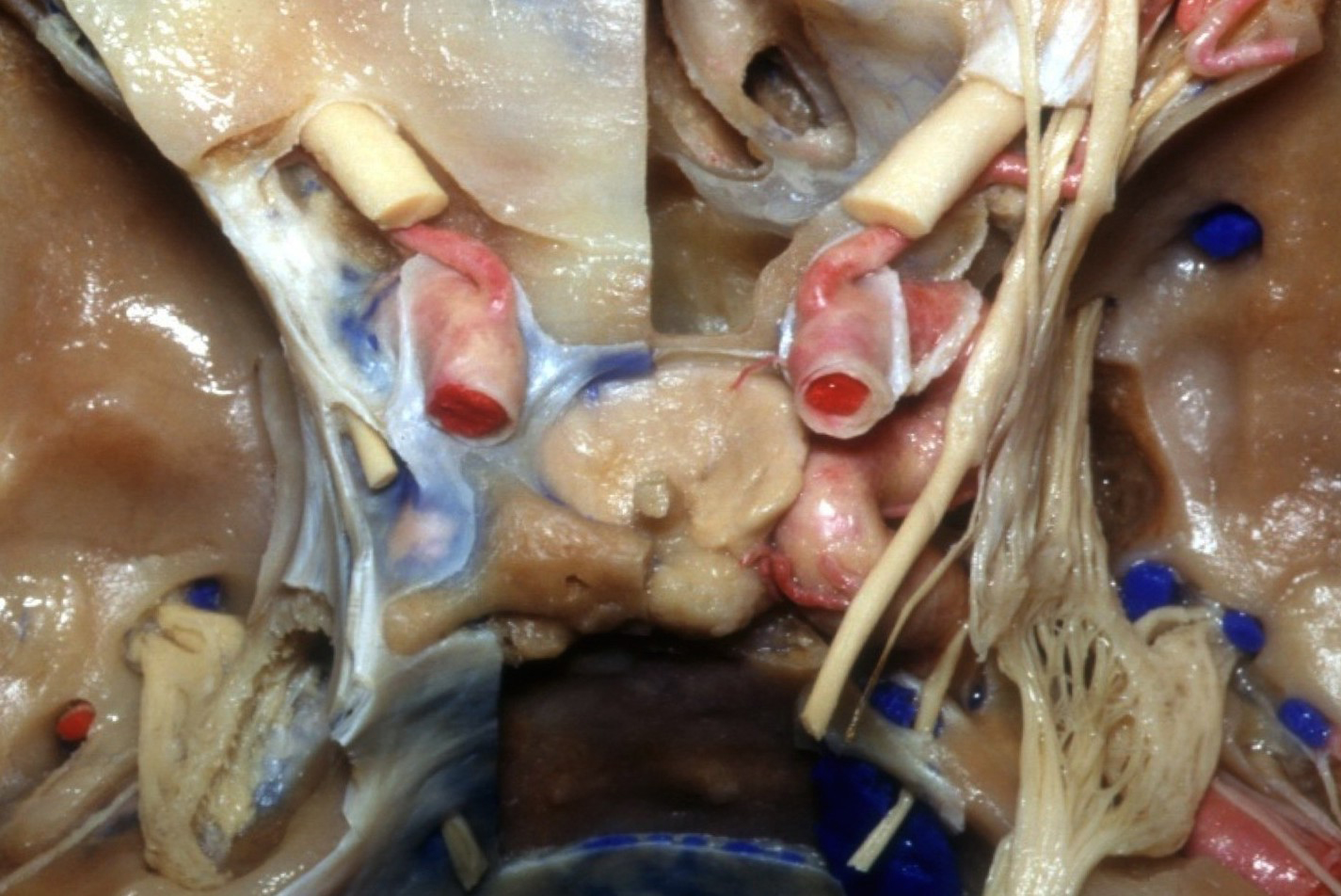 Figure 2: The view gained by a clinoidectomy. Note the extended view of the clinoidal segment of the ICA (left image). The proximity of the optic nerve to the clinoid places it at risk during drilling. The superior and lateral borders of the clinoid space are provided by the frontotemporal dura. The periorbita, optic strut, and sphenoid bone are the anterior and inferior limits. The relationships of other relevant vital structures (note the cranial nerves within the lateral wall of the cavernous sinus) are presented after other overlying dura and bone are removed (right image). These vital structures are at risk during mobilization of the process (Image courtesy of AL Rhoton, Jr).

Given the large number of neurovascular structures in this region, the importance of any additional created space or mobility of any nerves or key vessels is immediately apparent clinically. A major impediment to learning this technique is a lack of three-dimensional understanding of the clinoid and the surrounding vital structures. I will attempt to simplify the germane operative anatomy.

After the completion of the above three steps, the shell of clinoid can be mobilized and dissected away from the clinoidal ligaments. 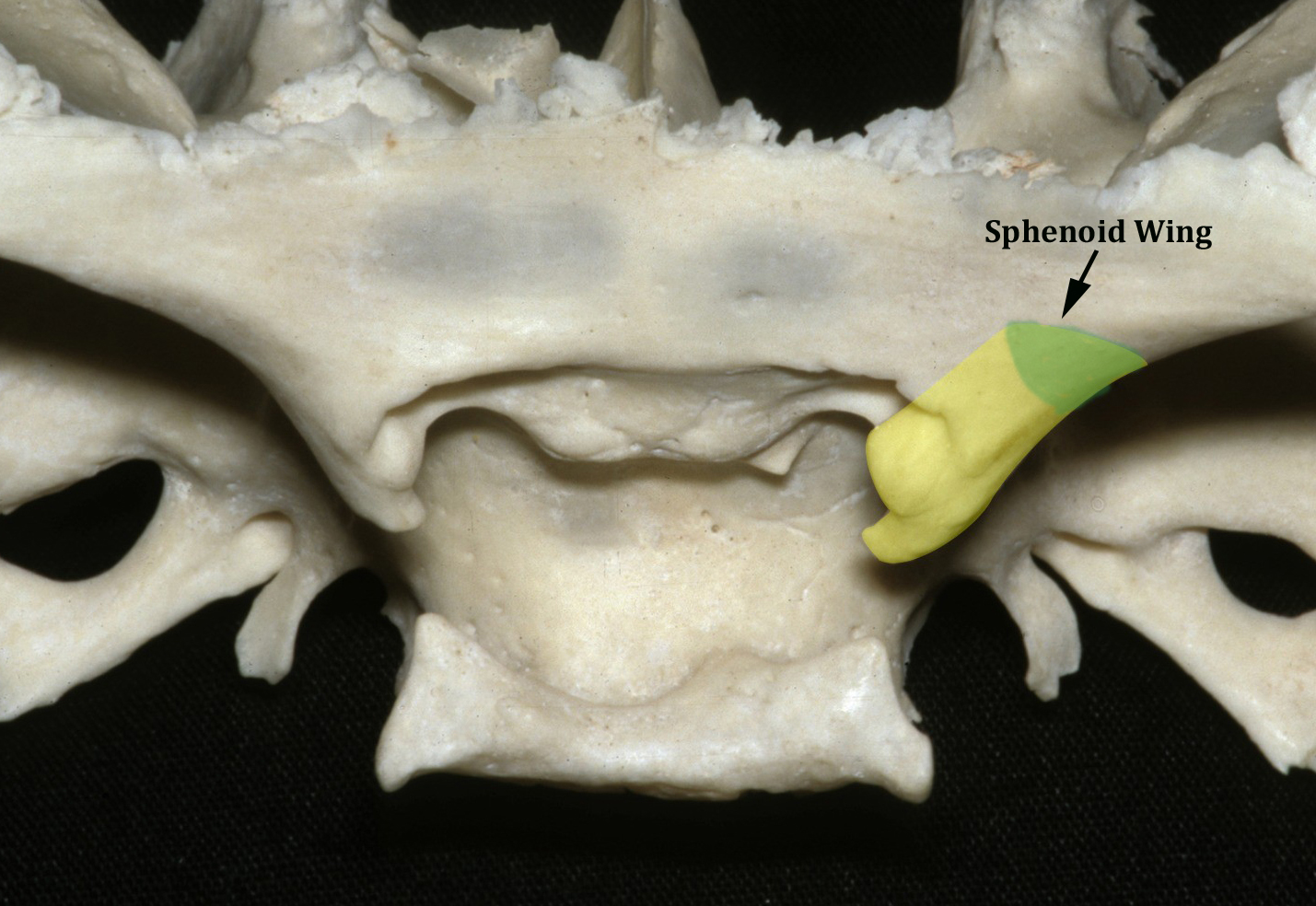 Figure 3: For an intradural clinoidectomy, the lesser sphenoid wing is removed and the superior orbital fissure may be skeletonized through the extradural approach as part of the extended pterional craniotomy (green). Therefore, the first step in intradural clinoidectomy, involving osteotomy along the sphenoid ridge to disconnect the lateral connection of the clinoid, is actually performed extradurally (Image courtesy of AL Rhoton, Jr). 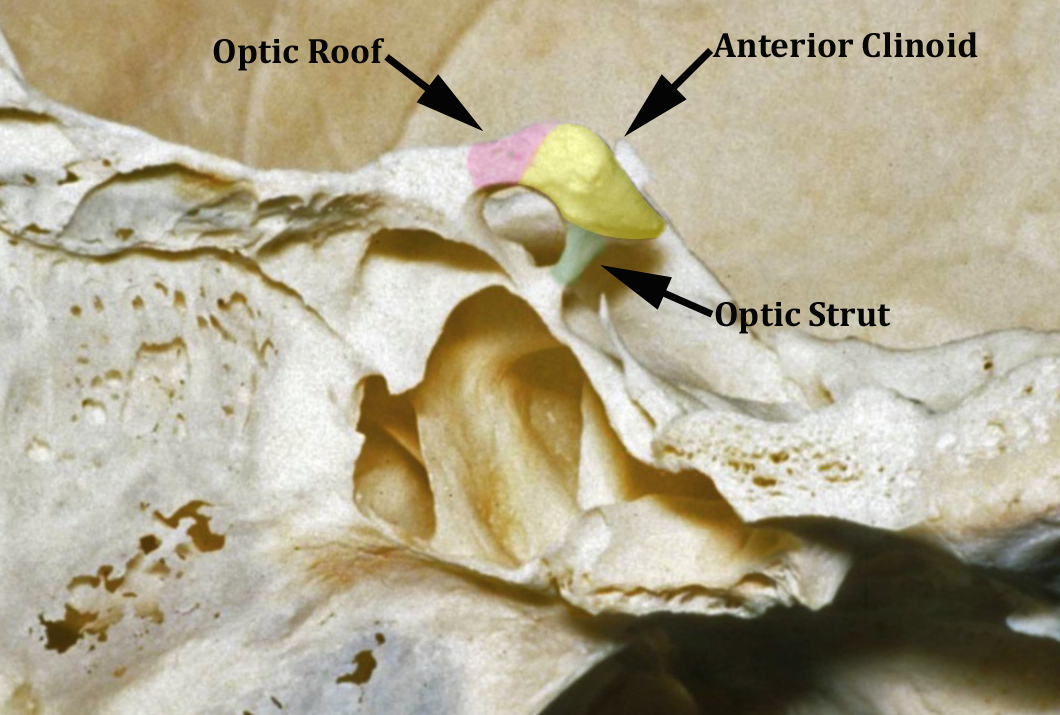 Figure 4: The second step involves osteotomy along the roof of the optic nerve and frontal bone medially (pink) to disconnect the anterior and medial connections of the clinoid. This decompression of the nerve protects the nerve from any traction injury during mobilization of the clinoid. The last osteotomy comprises of drilling within the clinoid to create an “egg shell” and disconnect the anteroinferior connection to the optic strut (green). These last two steps are conducted intradurally (Image courtesy of AL Rhoton, Jr).

Most aneurysms and tumors arising from this region can be accessed via a standard pterional or orbitozygomatic craniotomy tailored to their specific configuration. The lesser sphenoid wing is removed and the superior orbital fissure may be skeletonized through the extradural approach as part of the standard or extended pterional craniotomy. 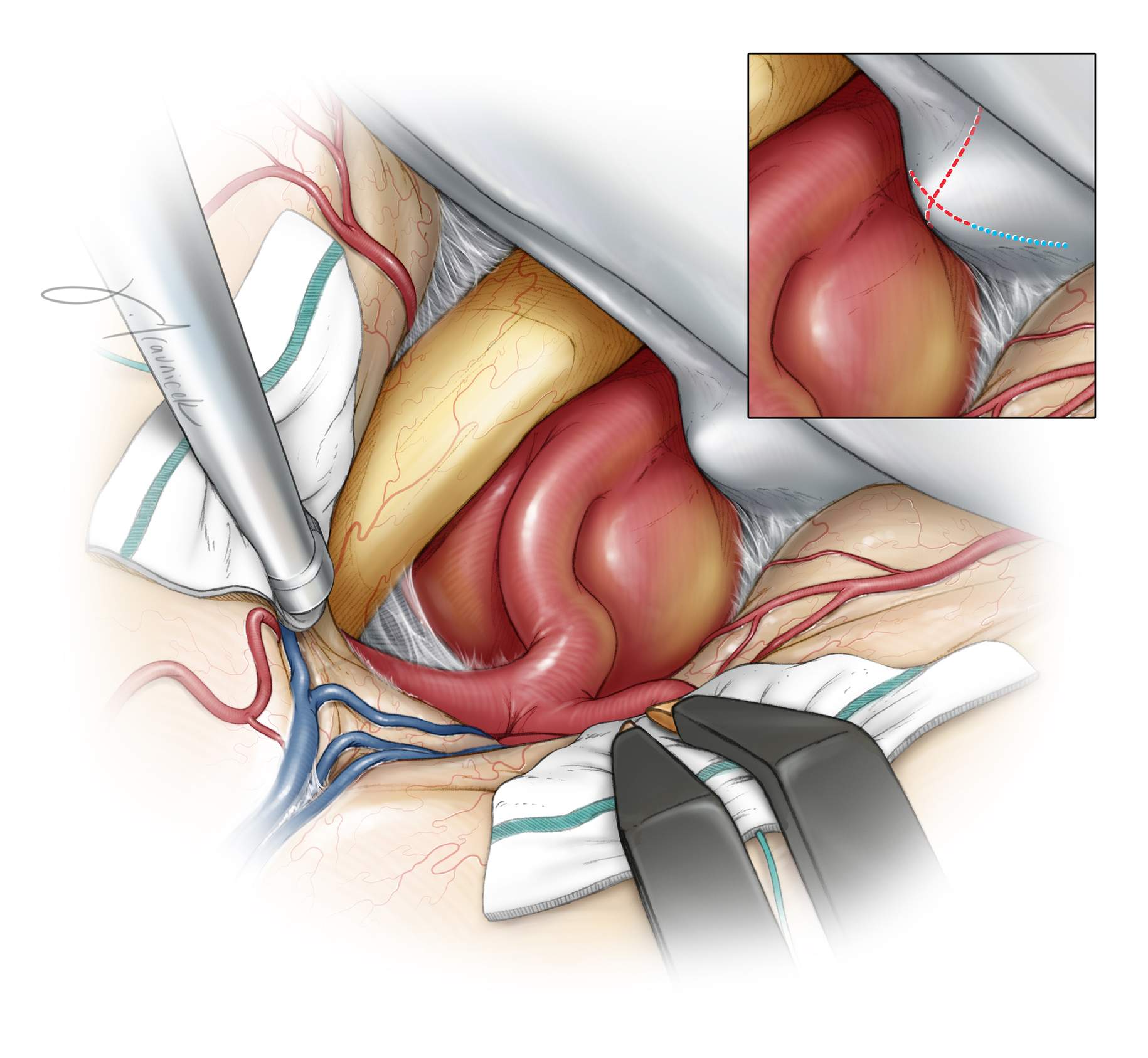 Figure 5: In large paraclinoid aneurysms, the Sylvian fissure is split and the optic nerve and ICA bifurcation identified. In this right-sided approach, the proximal neck of the aneurysm is often partly concealed by the anterior clinoid process. The clinoid dura is incised in a cruciate fashion; this incision may be extended more laterally or medially if necessary as dictated by the underlying pathology (inset). 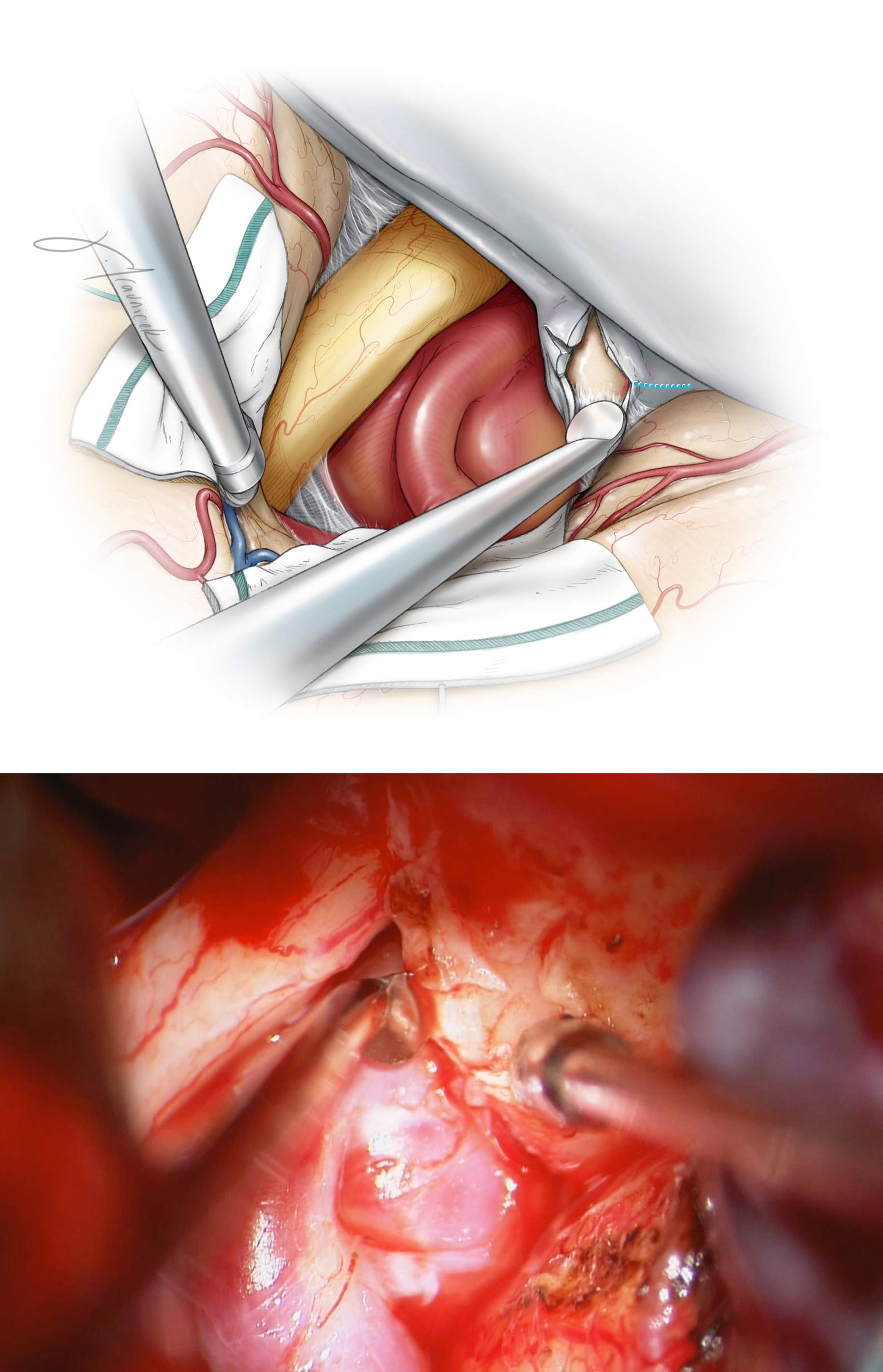 Figure 6: I usually incise the dura along the lesser sphenoid wing to the edge of the prior extradural ridge resection (top image, hashed blue line). A second perpendicular dural incision may involve the falciform ligament. Retraction of the dural leaflets exposes the medial clinoid (bottom image). 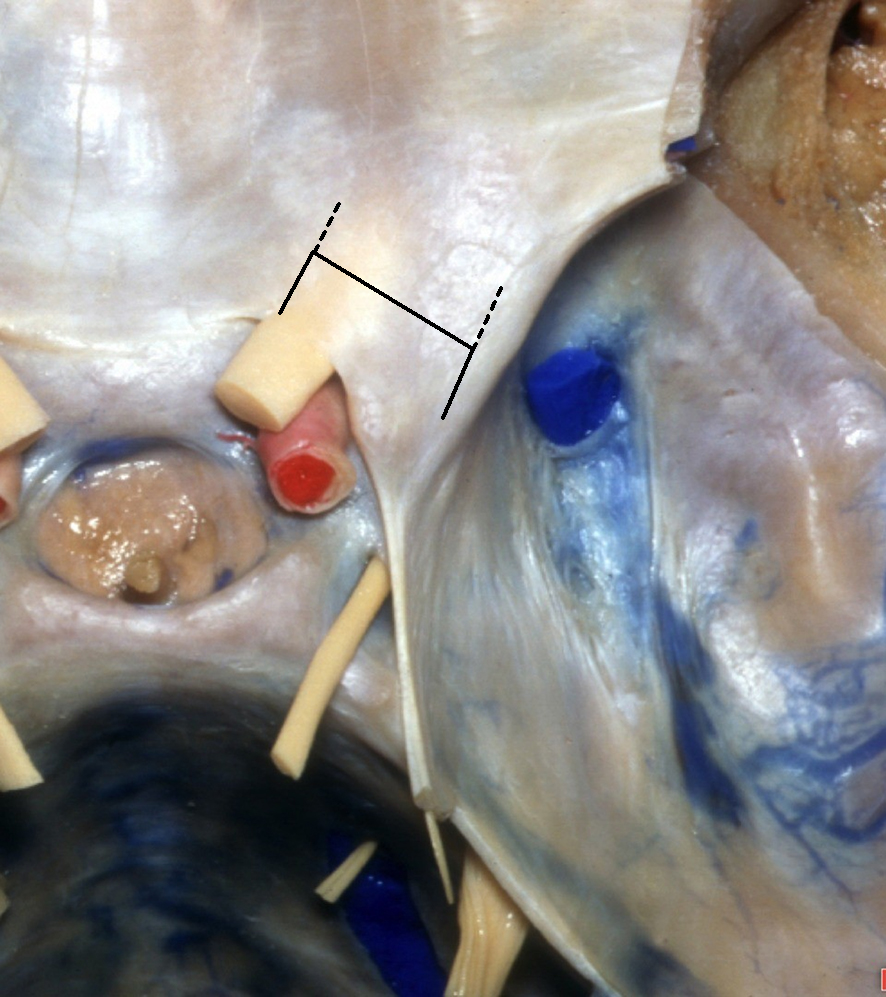 Figure 7: As an alternative, dural opening can be performed over the bone on the lateral aspect of the anterior clinoid and the medial aspect of the optic canal through the falciform ligament in a rectangular or H-shaped fashion (hashed black line). The dural flap is then reflected over the neurovascular structures in order to protect them. After clinoidectomy, the dural flap is reflected back and sealed to decrease the the risk of a CSF leak (Image courtesy of AL Rhoton, Jr). 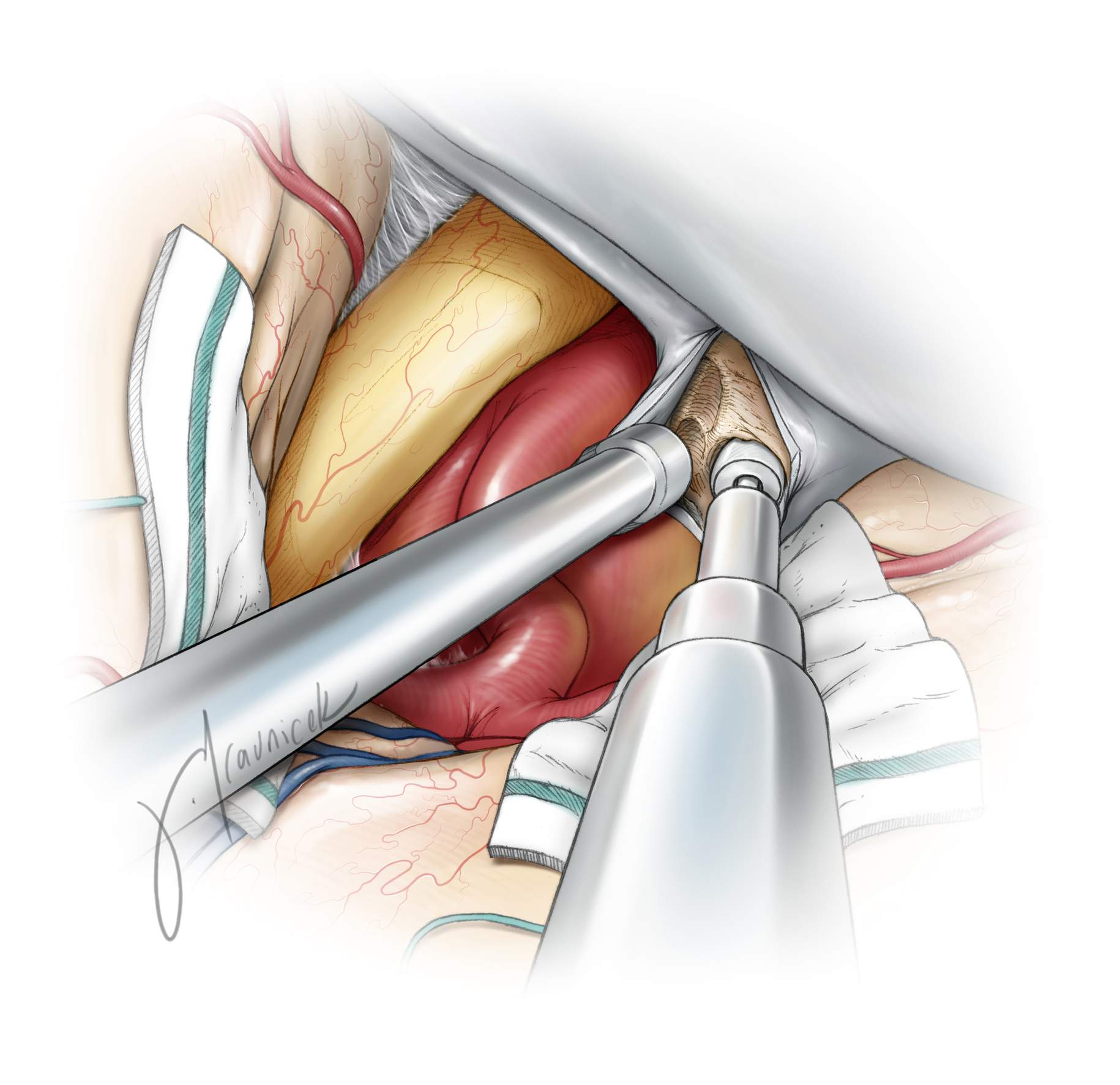 Figure 8: Using a diamond burr and constant irrigation, the clinoid process is cored out. Alternatively, an ultrasonic bone curette may be used. At this juncture, the extent of bony removal can be exactly tailored to expose the residual concealed proximal neck of the aneurysm. A thin shell of bone is left in order to maintain a safe border around the ICA and aneurysm. The medial leaflet of the dura further protects the vital structures. In this sketch, a limited medial clinoidectomy will be adequate to expose the aneurysm neck; a complete clinoidectomy is not necessary.

In the case of patients whose aneurysm is eroding through and adherent to the clinoid, a thin layer of bone is left on the aneurysm dome and the focus of attention is turned to exposing the aneurysm neck. 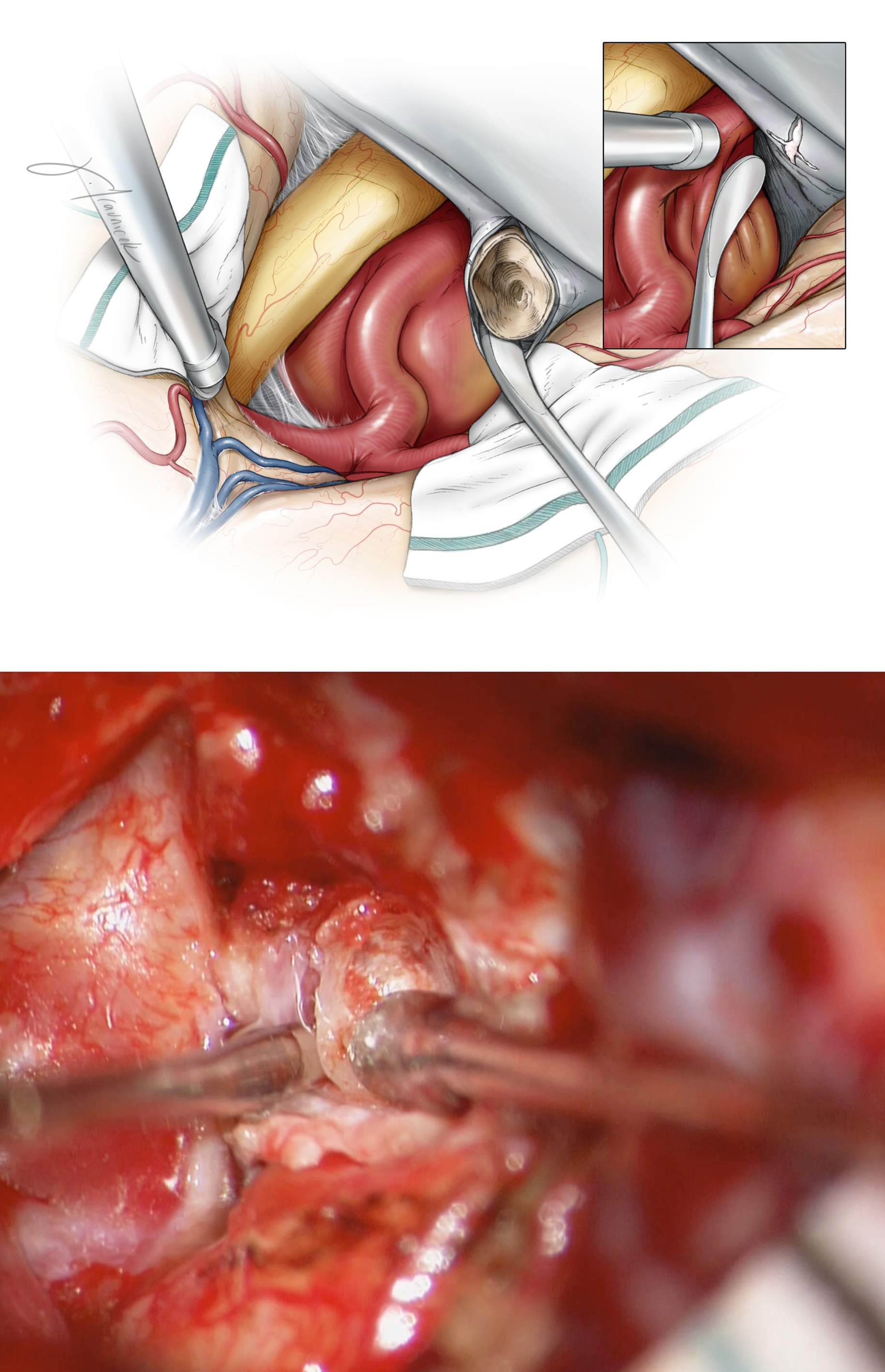 Figure 9: The clinoid is thoroughly cored out; this maneuver leads to disconnection of the clinoid from the optic canal and strut. The residual thin shell of bone is bluntly separated from the clinoidal ligaments and delivered. Venous bleeding from the cavernous sinus is easily controlled with a small piece of thrombin soaked gelfoam powder and gentle pressure by the cottonoid patty. The final result of this medial clinoidectomy is access to the more proximal neck of the aneurysm that is now available for clip application (top image, inset). Proximal control over the ICA was obtained at the neck.

If necessary, dissection may be continued along the walls of the ICA, the distal dural ring exposed and sectioned to access the clinoidal segment of the ICA. 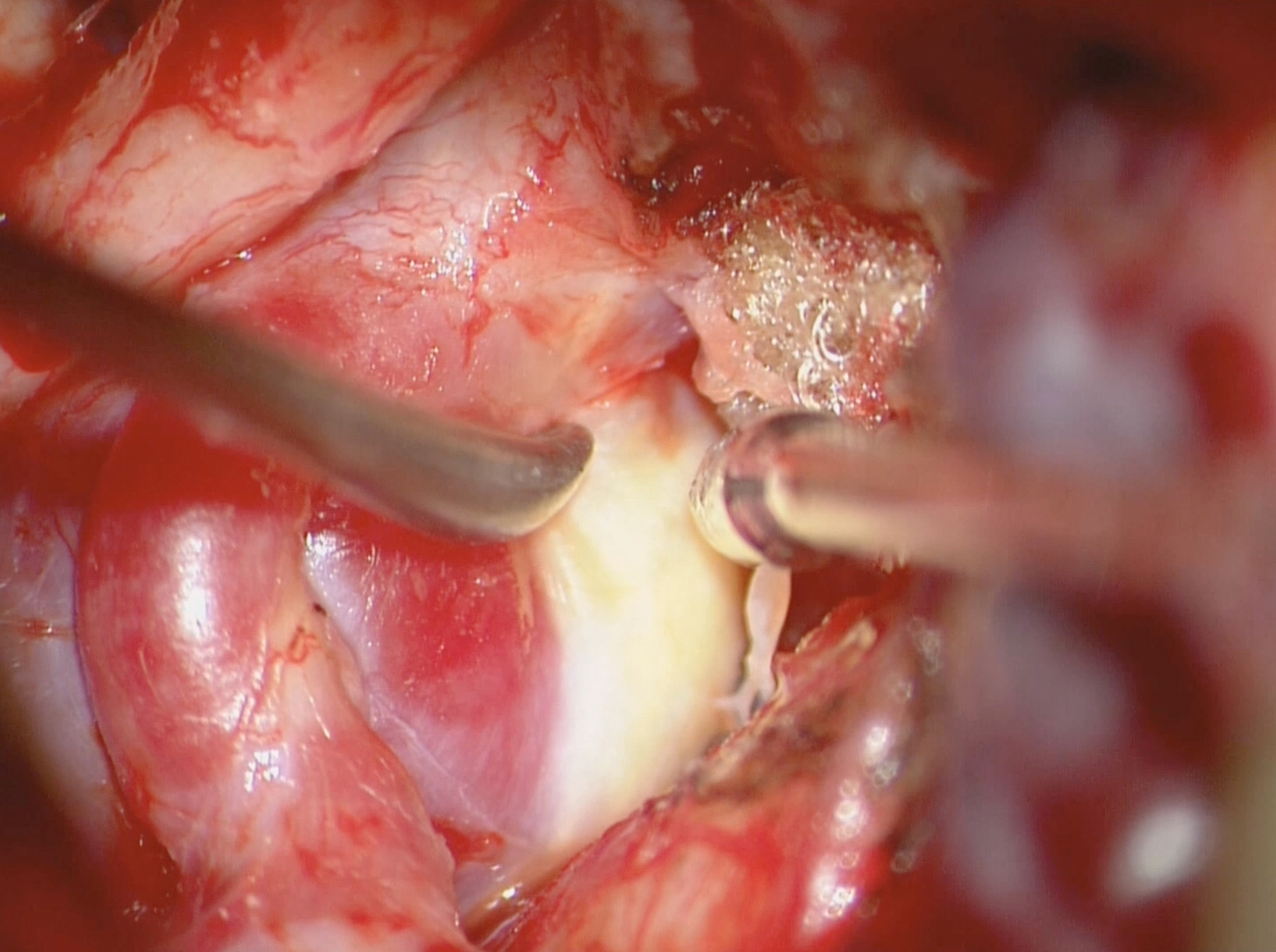 If there is concern about a pneumatized clinoid, a small piece of temporalis muscle may be placed within the defect and reinforced with a small amount of fibrin glue. The rest of the dura is closed in a standard fashion.

The patient is monitored for CSF rhinorrhea, changes in visual acuity, and diplopia. Postoperative rhinorrhea is first managed through temporary lumbar drainage. This maneuver is often effective for cessation of the leak if the fistula is suspected at the level of clinoid resection. If not effective, the patient will be returned to the operating room for repacking of the clinoidectomy defect.

Kulwin C, Tubbs RS, Cohen-Gadol AA. Anterior clinoidectomy: description of an alternative hybrid method and a review of the current techniques with an emphasis on complication avoidance. Surg Neurol Int 2011;2:140.

Domenic Esposito
Several maneuvers which I have found helpful and time saving include: bipolaring the overlying dura thoroughly prior to incising it, use of a 1mm or less kerrison on a somewhat thicker shell as long as it is not adherent to the aneurysm and always obliterating the bony defect with bone wax prior to closure etc . These maneuvers will save you time and perhaps save you a trip back to the OR to repair a leak. Dom Esposito
Jan 21, 2018 02:03 AM