“People may not remember exactly what you did, or what you said, but they will always remember how you made them feel.” Carl W. Buehner 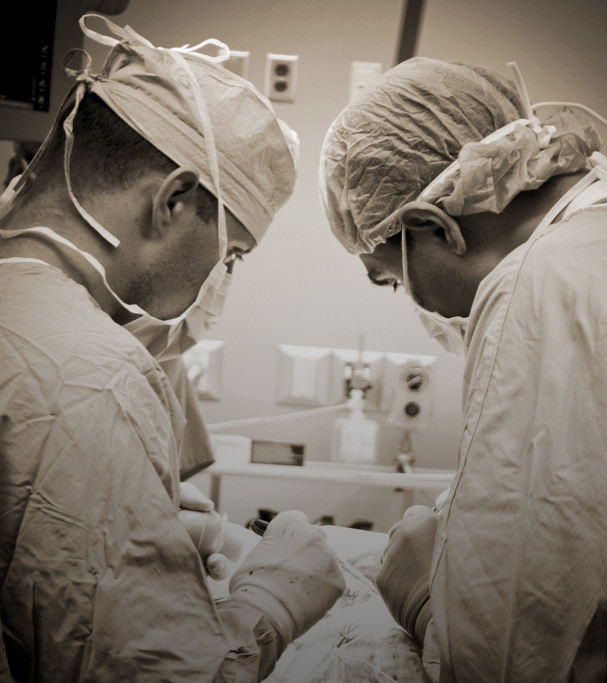 The operating room (OR) is an intimidating setting for most neurosurgery residents, particularly during their early years of training. Every senior resident and attending surgeon can recall an incident of tension in the OR such as an uncontrolled intraoperative aneurysm rupture. The emotional reactions of the surgeon are the most memorable takeaways from these situations. Learning to be prepared for these occurrences and to effectively communicate can prevent or minimize the risks associated with these events. A skilled communicator is aware of the immense valance of his or her words.

The attending surgeon serves as the leader and “the captain of the ship” in the OR, guides the team, and sets the tone for interactions and emotions in the OR environment. The team expects exemplary professional behavior from the attending as a role model, and it is this leadership that maintains the OR as an efficient and safe place. The attending surgeon must possess effective communication skills, demonstrate respect for all team members, and maintain a sense of confidence. Historically and unfortunately, some iconic attending surgeons have not consistently demonstrated these qualities.

The culture of the OR has been dominated recently by mandates to maximize patient safety. This change has provided residents more responsibility to request help or guidance, which can create an internal conflict within a trainee who seeks the embedded character traits of independence, confidence, and determination. These traits are widely viewed as desirable in trainees and were the major facets of the previous surgical culture.

Surgeons have historically been considered inflexible and uncompromising and have acknowledged themselves to be at the peak of the hierarchical ladder of medicine. The OR environment has historically embellished this climate and identified the “disruptive physician” as the attending surgeon. The common causes of disruptive behavior are listed in Figure 1. 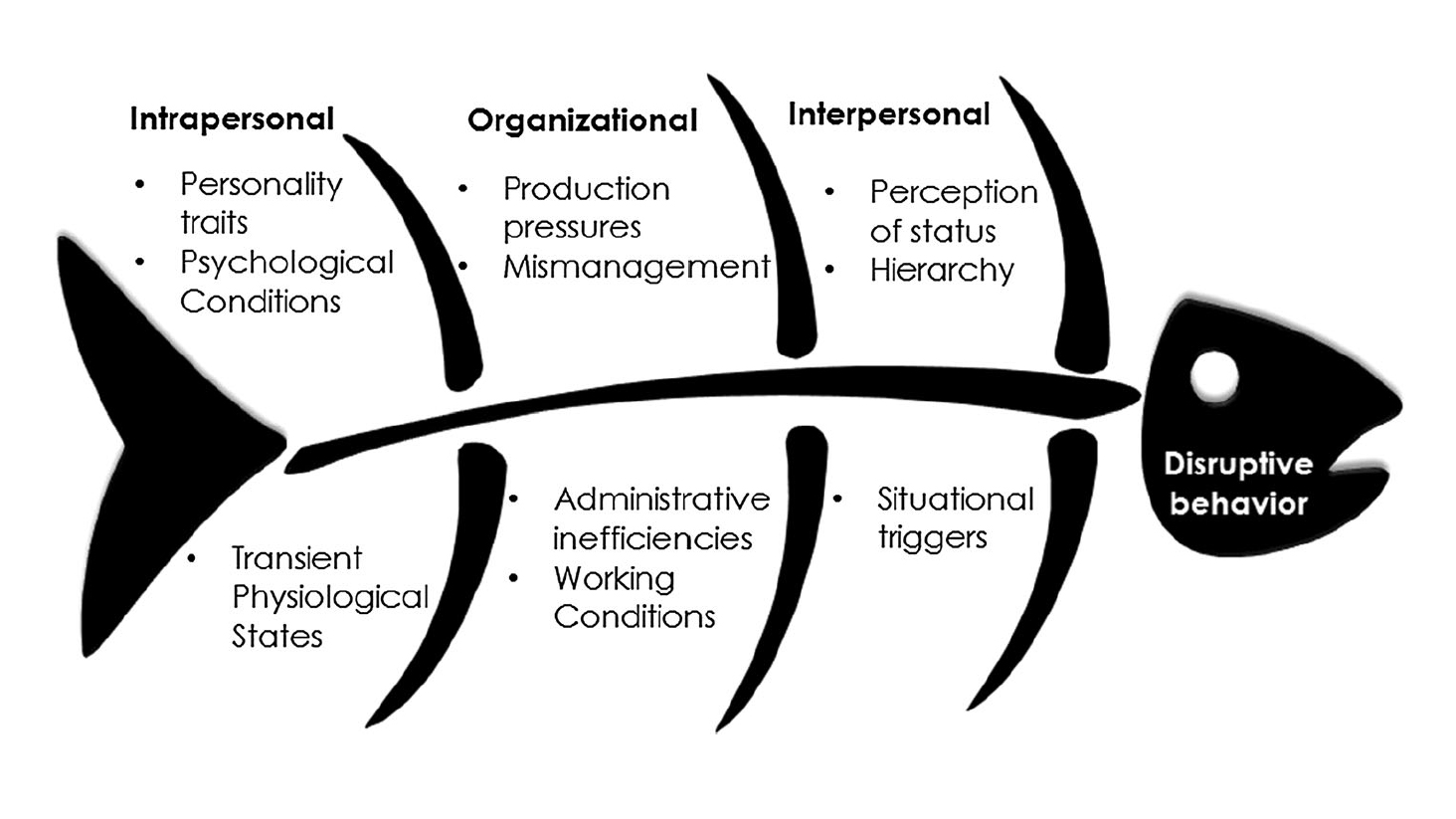 To discuss the operating room climate and appropriate etiquette, I am including this chapter, divided into resident’s and attending surgeon’s responsibilities. Ultimately, each resident and attending surgeon should continue to advance his or her self-awareness/mindfulness and recognize when he or she will be most vulnerable to demonstrating disruptive behavior. This self-awareness and emotional intelligence is critical for guiding the surgeon in stressful times. For example, I am most vulnerable late in the day when I am not rested (post-call), preoccupied with a recent poor patient outcome, and find myself involved in a very challenging case filled with unexpected technical difficulties while an inexperienced surgical team is assisting me. I recognize these situations and my shortcomings, control my emotions, and proactively remain nonjudgmental. 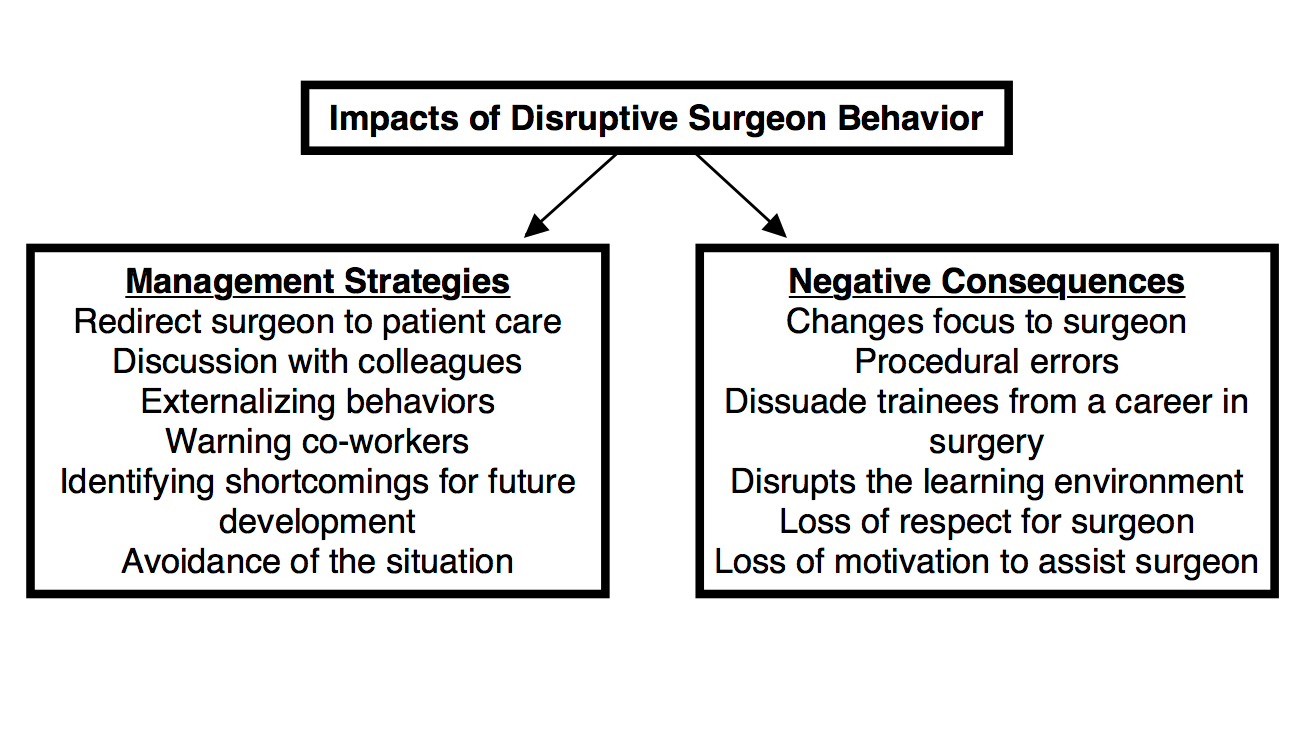 Figure 2: Disruptive behaviors on the part of the surgeon have a widespread impact on trainees and staff, as described in the Negative Consequences box. Coping strategies are described in the Management Strategies box.

The resident surgeon is responsible for the paramount task of learning to become the leader in the OR. This role is not naturally attained by any trainee but instead requires the resident to rise to the challenge in times of tension and command the respect of the team. This respect must be earned (a privilege, not a right!), and therefore this role takes time, coaching, and experience to attain.

As the impressionable resident observes the well-established attending surgeon in the OR, it is important that he or she is mindful that not all the behaviors demonstrated by the surgeon are desired in the OR setting. Every surgeon has his or her own strengths and weaknesses as a leader.

It is also challenging for a resident to emulate the positive qualities of an attending, given that the OR is an intimidating place and requires the junior resident to lead and maintain composure even when he or she lacks confidence. This fact highlights the importance of establishing leadership traits as a medical student.

Developing confidence in the OR requires a multifaceted approach in which the resident establishes self-confidence through diverse experiences and technical skills. Persuasion and leadership are developed via understanding, goals, leverages, and influences (“UGLI”).

Achieving confidence in oneself and the team is a diverse concept, but it can be attained through coaching and practicing to form a habit. An easy step in reaching confidence is meticulous preparation. Preparation allows the resident to inform the team of the goals and critical steps of the procedure at the start of the case. The preoperative discussion with the team also serves to empower residents in their role in the OR and establishes the approachability of the surgeon.

The operative plan also facilitates clear communication among the other team members, including circulating nurses, anesthesiologists, surgical technologists, and medical students. With thorough preparation, the resident is able to communicate clearly, anticipate each step of the procedure, and lead the team to achieve the ultimate goals of the operation.

A list of management strategies for dealing with disruptive behavior is shown in Figure 2. These techniques are not a collection of remedies for the root of the problem but, rather, offer only temporary relief for each episode.

The most common strategy for dealing with disruptive surgeons is debriefing with colleagues. This activity provides a productive way to dissipate the emotions generated from working in a hostile OR setting.

An additional simple strategy for coping with a disruptive surgeon is future avoidance of the situation. This strategy is often used by residents and OR staff in response to a known “repeat offender.” Although not always appropriate and certainly not a definitive answer, avoidance can be used as long as it does not compromise patient care. 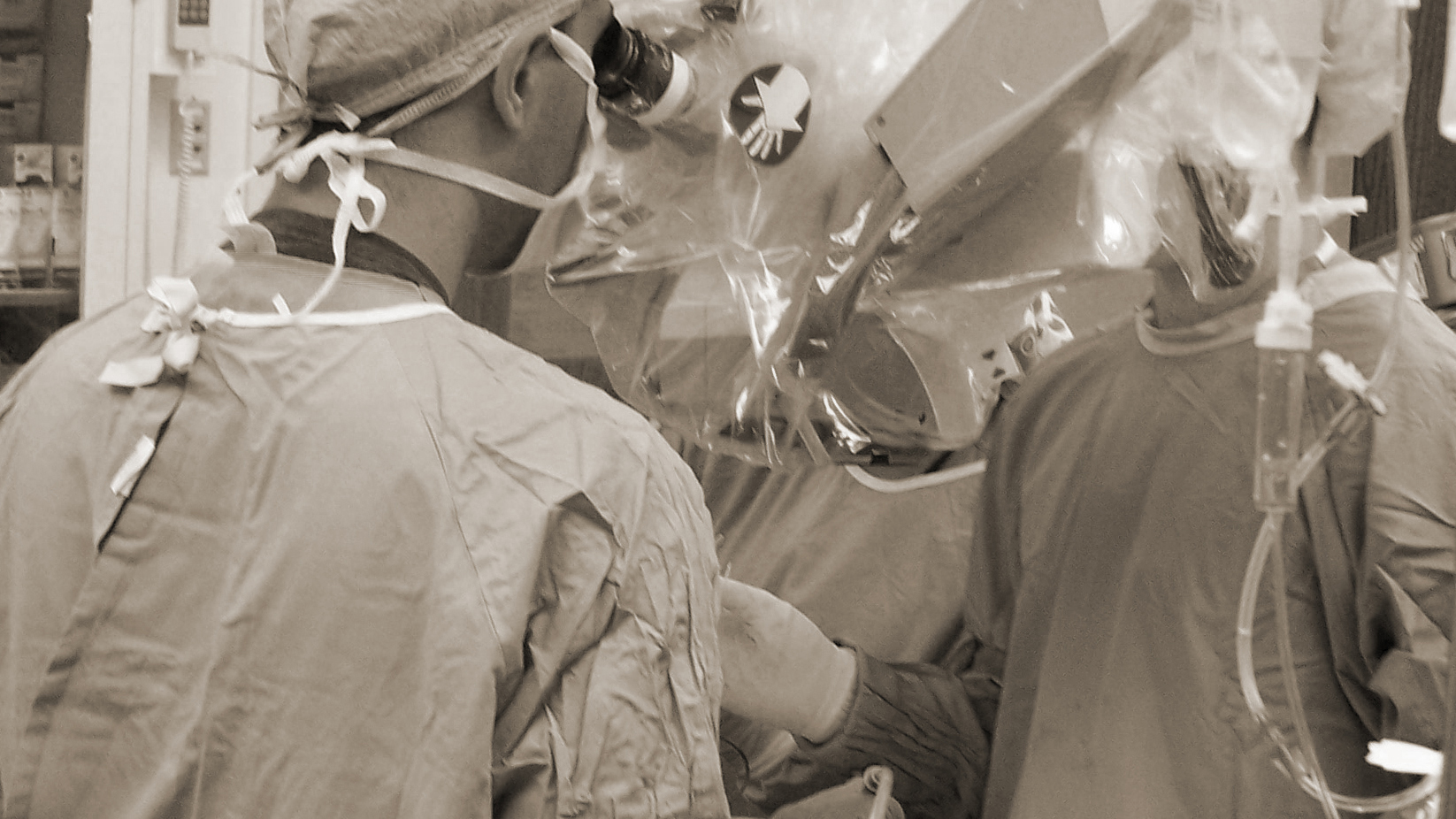 As mentioned previously, the attending surgeon must serve as a role model for the residents and OR staff. As a result, residents who have trained in different programs present different defense mechanisms when faced with similar stressful situations.

A disruptive attending surgeon can have an immense impact on the patient, medical students, resident physicians, and OR staff. Examples of disruptive behaviors include profanity, insensitive attitudes, derogatory comments, and hyperactivity. For a more complete list of these behaviors, see Table 1.

Credit to Villafranca et al (2017) for the content of this table.

Disruptive behavior by the attending surgeon can dissuade a trainee from pursuing a career as a surgeon. It can also result in attrition among trainees and staff because of the grim outlook of working under such hostile conditions for a prolonged time. The loss of talent will adversely affect the work environment further, leading to a vicious cycle.

Disruptive behavior can also result in increased procedural errors. When members of the team feel threatened, they are less likely to be proactive about events that could precipitate a “never” event due to the fear of repercussions from the attending surgeon. Team members may also be distracted from patient care activities given their preoccupation with defusing and pacifying the disruptive experience.

Management of disruptive behavior raises the obvious question of whether a “repeat offender” is capable of learning a more appropriate method of functioning in the OR. As depicted in Figure 3, it is important for remediation to occur with a follow-through on disciplinary action if change does not take place. These behaviors should not be taken lightly given their negative consequences. 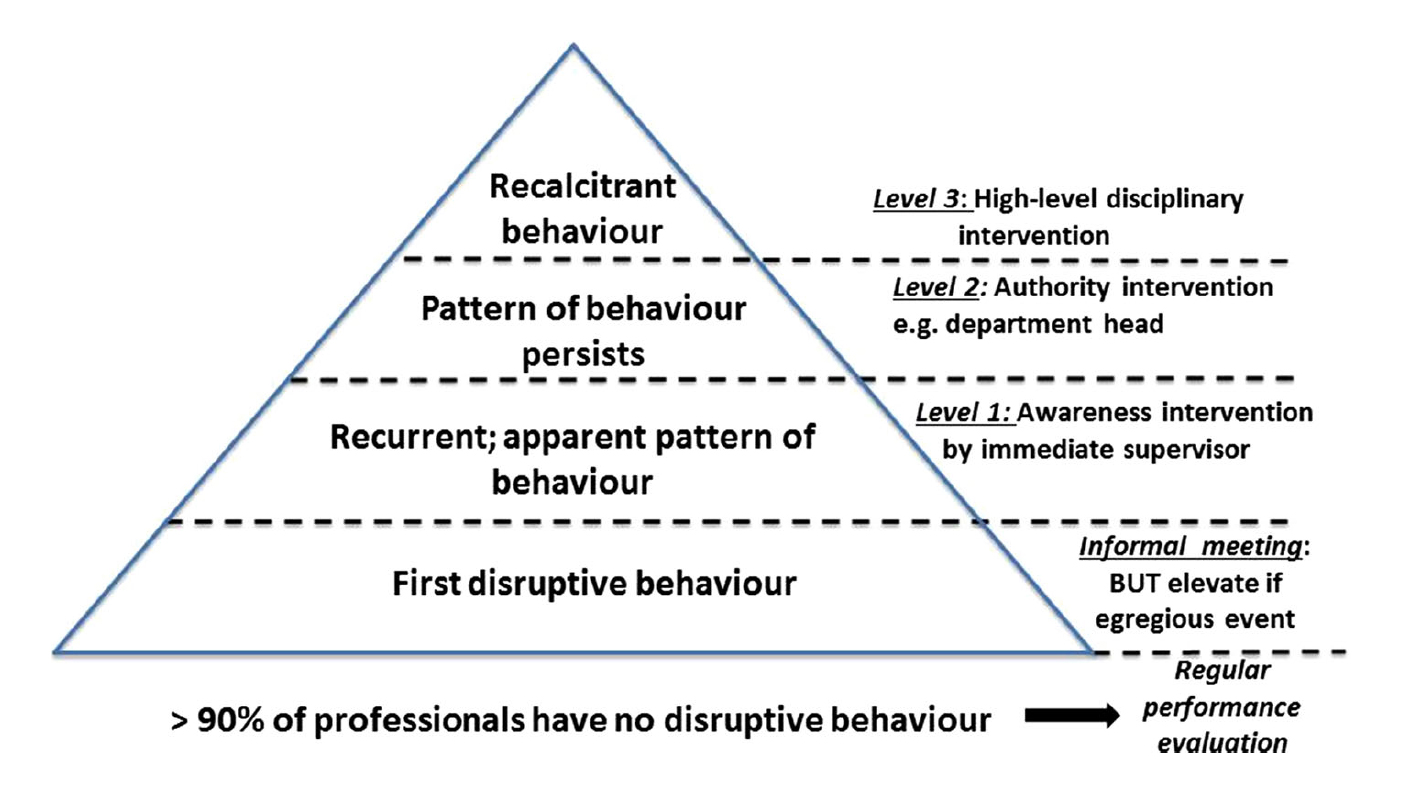 The appropriate behaviors for a surgeon can follow the guidelines established for civility within the greater population. Examples of these behaviors include respect, self-awareness, and kind speech. A more extensive list can be seen in Table 2. A survey-based list with major and minor themes is shown in Table 3.

Credit to Villafranca et al (2017) for the content of this table.

Credit to Currey et al (2011) for the content of this table.

For a surgeon, the process of becoming the “captain of the ship” in the OR is a challenging but rewarding task. When all goes well, the end result is an efficient team with the patients' best interest in mind. It allows each team member to provide input within the realm of his or her role, and it encourages each member to promote the team’s success. It is through the demonstration of respect, effective communication, and thorough preparation that a resident can attain the role of the “captain of the ship.”